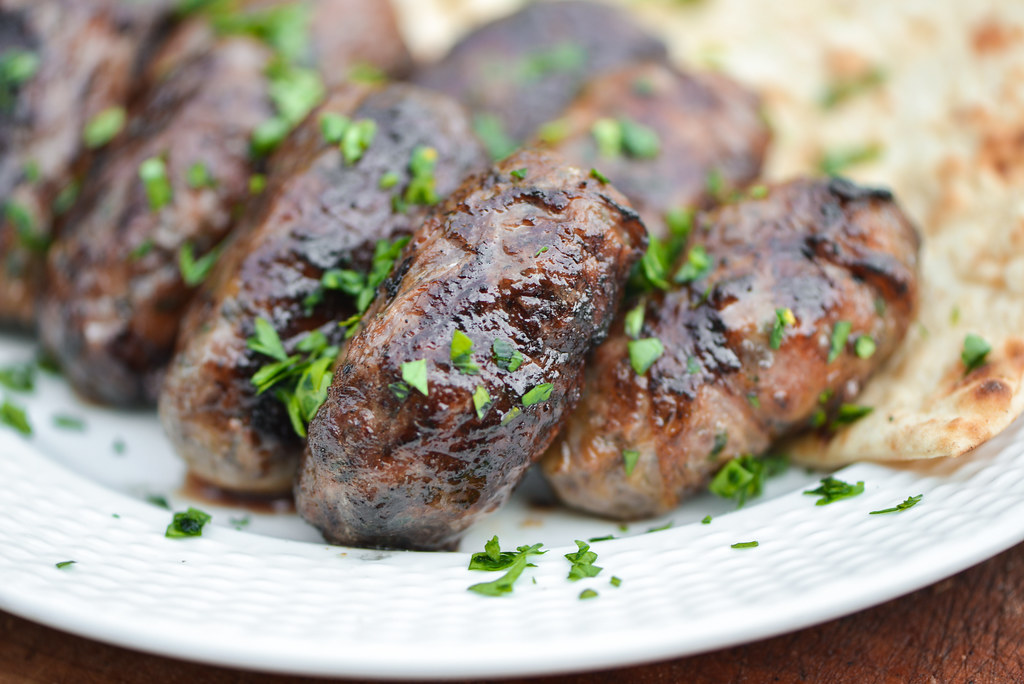 I love making sausages. Or rather, I've loved making sausages ever since I made the upgrade from my KitchenAid sausage stuffer to a true vertical stuffer—one that transforms sausage-stuffing into a simple, almost effortless chore. I've created a lot of sausage recipes and over the years my links have only improved. As much as I hope those beautiful images of chorizo, merguez, and tomato and basil chicken sausages will influence others to try their hands at sausage making, I know the investment in both time and expense is likely more than the average home cook can or will take on. I always finish with a disclaimer that all my sausage recipes can be formed into patties rather than stuffed, but let's face it: an uncased sausage just isn't the same. 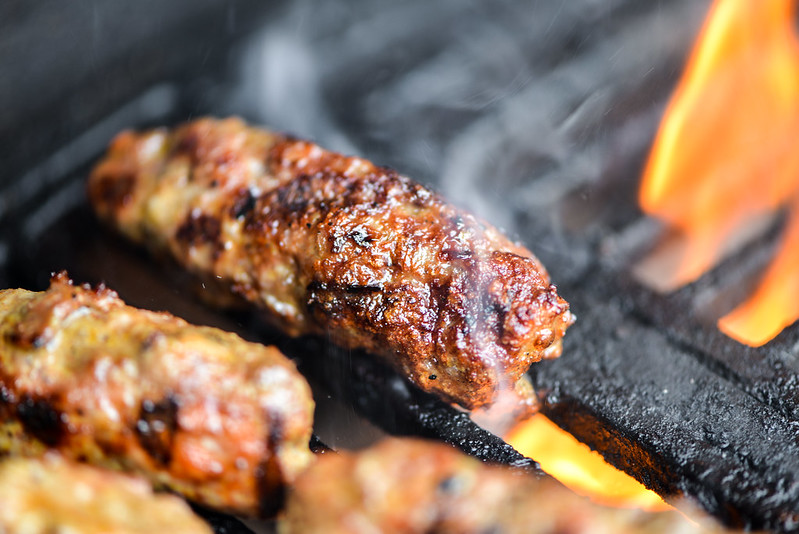 But that doesn't mean an uncased sausage can't be good. Take the little links of cevapi I did a couple summers ago—those free-formed Southeastern European beef, lamb, onion, and garlic sausages were pretty incredible, especially when paired with smoky ajvar. Still, they were missing the snappy, darkened crust you think of when you hear the word "sausage." Luckily, it turns out there's a way to get some of those qualities without a proper casing; a trick I discovered when making sheftalia, an uncased sausage that hails from Cyprus. The secret? It's all in the caul fat. 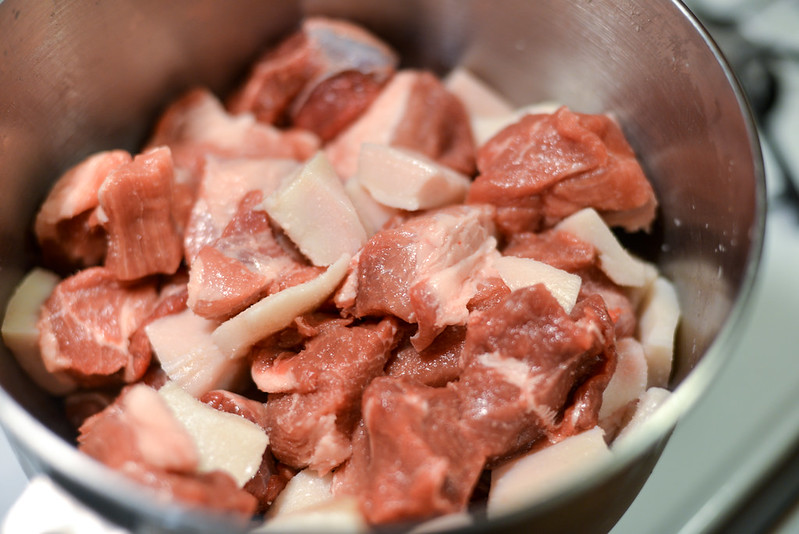 Here's the thing: sausage is all about fat. Which means that before we even mention the caul fat wrapper, we need to talk about the fat in the meat. A nice, fatty meat blend is what will keep your sausage flavorful and juicy once it hits the grill (and your taste buds). When it comes to sheftalia—a mixture of equal parts lamb and pork—that means turning to some of the fattiest cuts you can find: lamb shoulder and pork shoulder.

Both of these cuts will get you a whole lot closer to a good fat-to-meat ratio. But for optimal results, we're gunning for a 30% fat mark. That's where pork fatback comes in (or, as I like to call it, white gold).

Fatback is a slab of pure fat cut from the back of a pig, and it's an ideal way to boost the fat content of your meat mixtures. I generally add one pound of fatback for every four pounds of meat, adjusting slightly depending on how much fat is in the meat to begin with. For this sheftalia, I actually went a little heavier with the fatback because I needed to correct for using less fatty leg of lamb (which is what I had on hand) instead of lamb shoulder.

Once I'd weighed and cubed all the meat for the sheftalia, it was time to get my grind on. 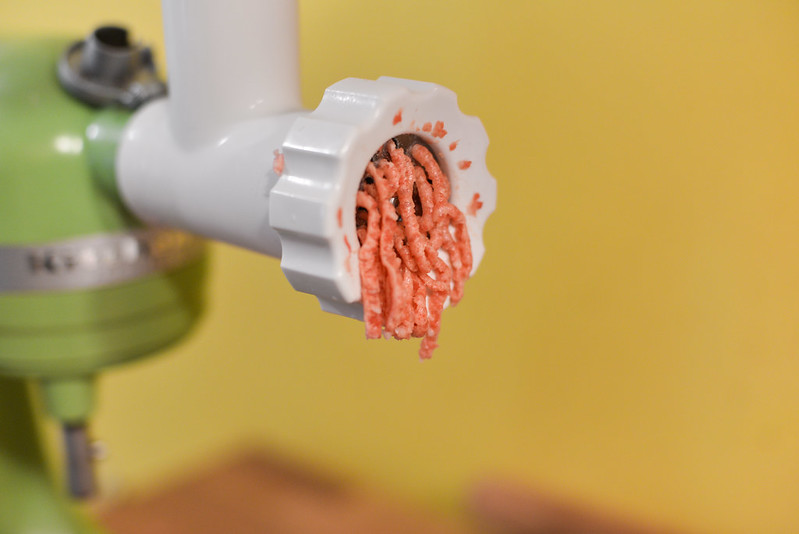 While I prefer the feeling of making my sausages from start to finish, the task of grinding the meat should never stop you from trying out a sausage recipe—you can always have your butcher grind the meat for you—you'll come out with the same product, without any of the added time and mess. 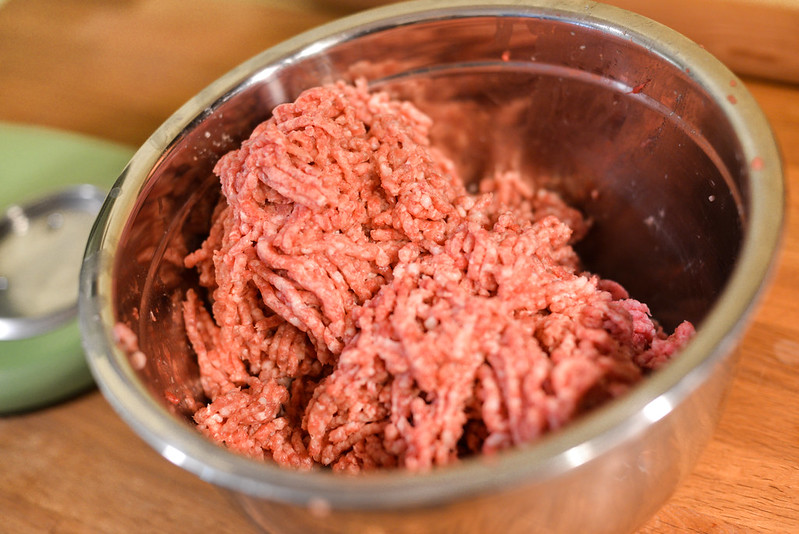 For this recipe, I found that a two-step grinding process produced the best results. Protip: you'll want to keep everything cold when making sausages—it's what helps the fat and meat stay bonded together—so I started off by chilling (and salting) the meats and fatback, and storing the grinder's cutting die in the freezer. Only once everything was nice and chilly did I go ahead and send the cubes of meat through the grinder, which was fitted with that icy-cold die. Then I sent the mixture back through the grinder again, this time using the fine-cutting die. This two-step process left the fat especially well-distributed throughout the meat. 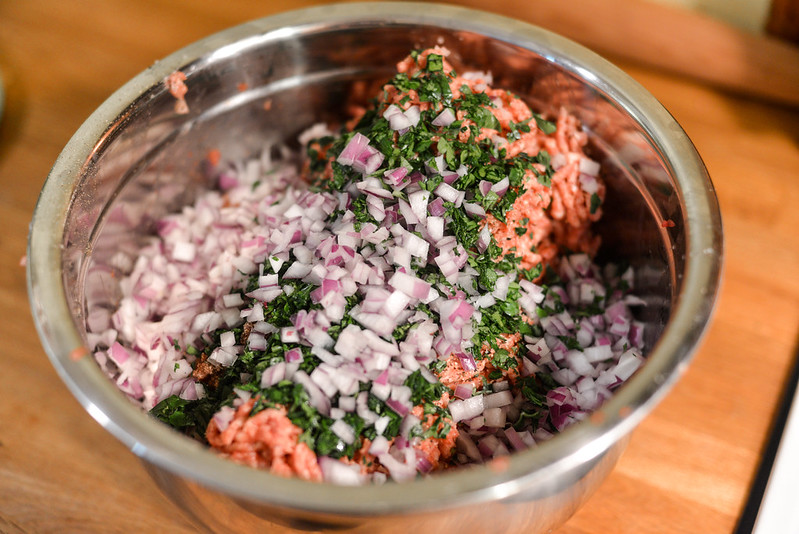 After the final grind, I mixed in sheftalia's traditional seasonings: onion, parsley, and pepper. 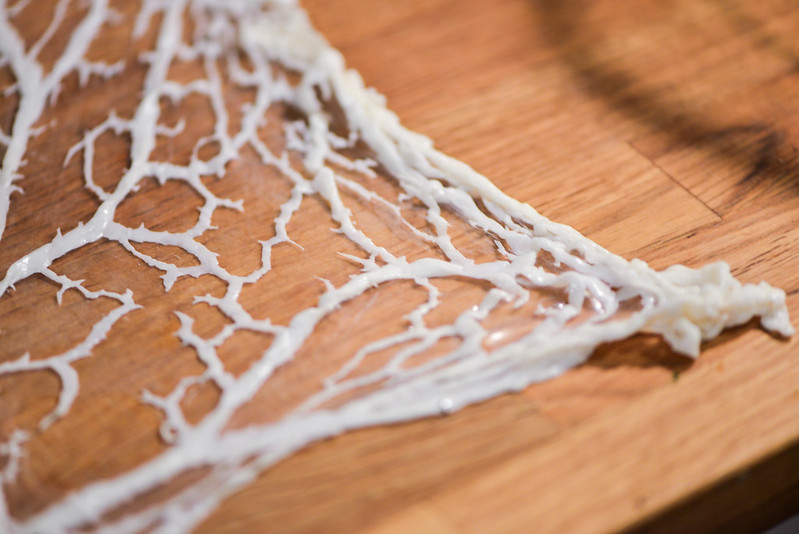 After frying off a small sausage patty to confirm that the balance of seasonings was right, it was time to take this sausage to the next level and swaddle it up in some caul fat.

For those new to the ingredient, caul fat is the thin, fatty membrane that surrounds the stomachs of ruminants like cows, pigs, and sheep. It's a thinner-than-paper sheet that has lines of fat running through it in a pattern that sort of looks like it was made by a drunk spider. Although delicate, it's easier to work with than sausage casings, and doesn't come with any of the funky odor of animal intestines. 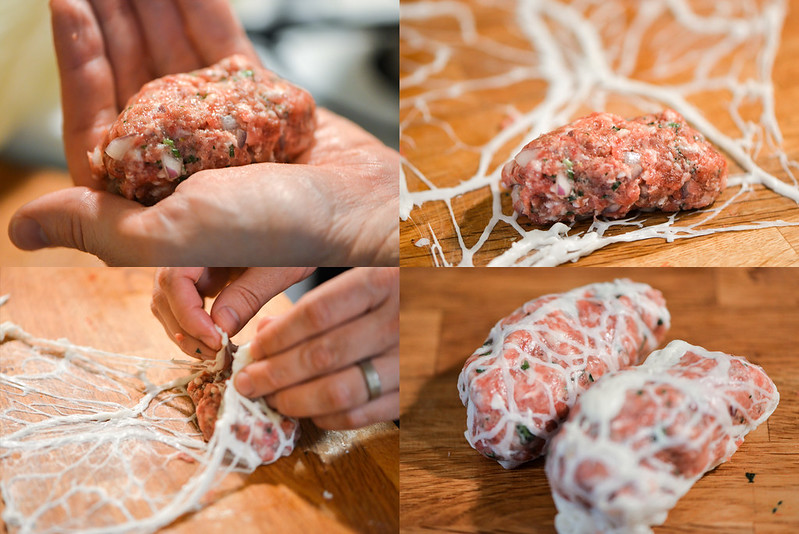 Wrapping the sausage in caul was a quicker process than I'd expected. The caul fat itself spread out into a sheet surprisingly easily; then I just grabbed around two ounces of sausage, formed it into a cylinder, and placed it at the edge of the sheet. All that remained was to fold the top of the caul fat over the sausage, followed by both sides, and then roll the sausage until it was fully encased. To separate it, just cut off the remaining caul fat to use for the next patty. 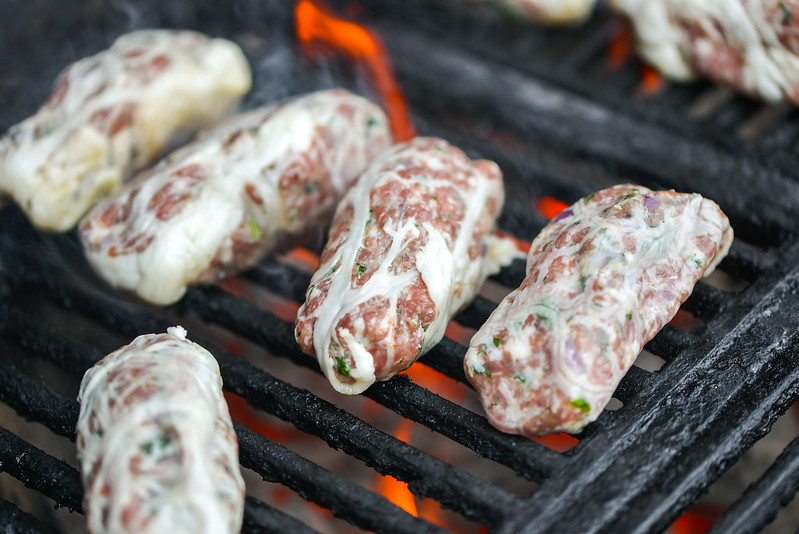 The caul fat's magic really gets going when the sausages hit the grill. Once I had a fresh batch of coals going, I put those webby looking tubes of meat directly over the fire. As expected, the fat surrounding the sausage began to render, and when fat mixes with fire, it creates flare-ups: little towers of flame rose from the scorching coal, kissing the sausage and delivering an intense heat that quickly darkened the exterior. 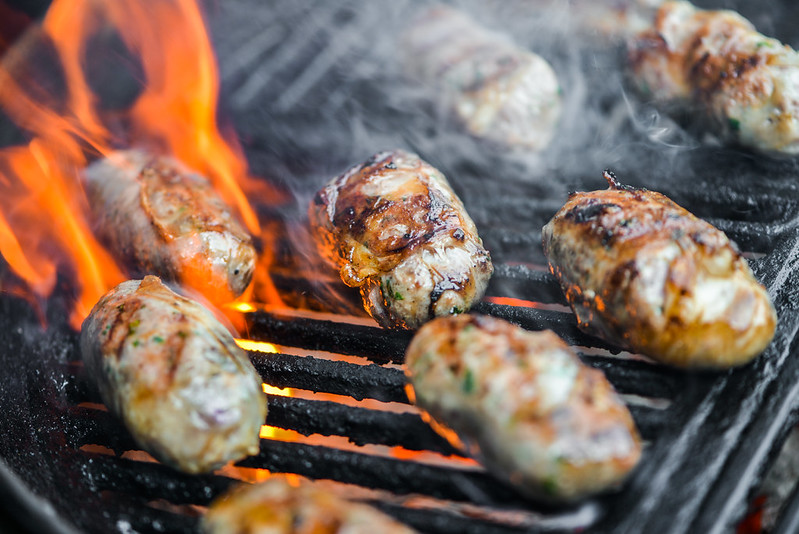 Some of those flare-ups were large and required me to move the sausage to other areas of the grill until they dissipated, but spires of extra heat are generally desirable in these sorts of situations, since they create a crust that's deeper and crunchier than you'd otherwise get. 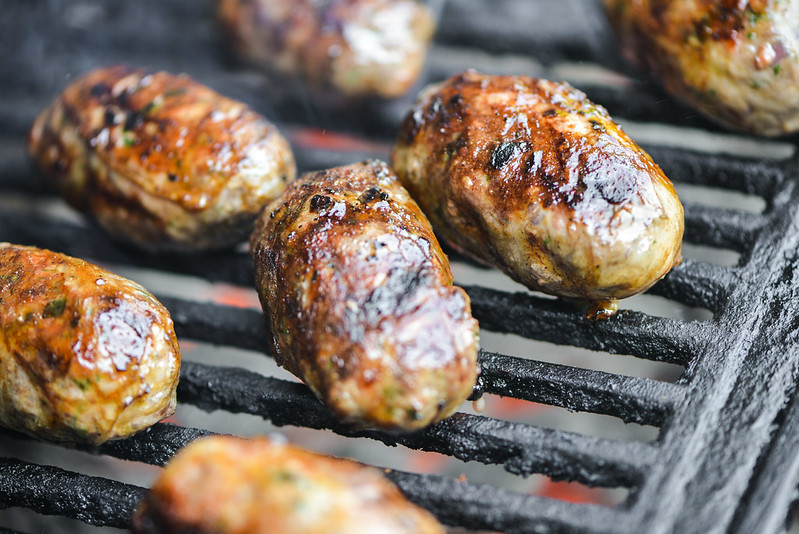 After about five minutes, a lot of the caul fat had rendered away, and the flare-ups subsided. I kept grilling the sausages over direct heat until they were cooked all the way through—in other words, when they hit 160°F on an instant-read thermometer. That took another 10-15 minutes, at which point the outside of the links were even crustier than before. 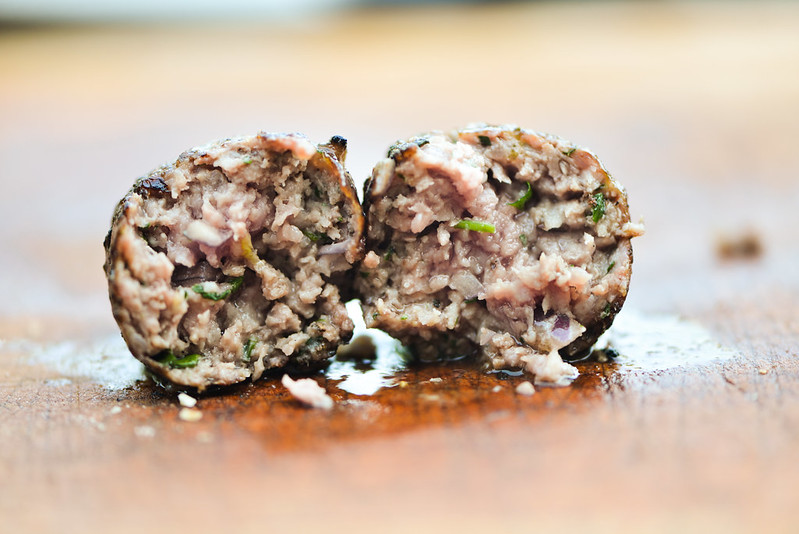 Although they may have looked super charred, the interior was tender and juicy—something we can thank all that fat for. The sausage had an uncomplicated, light lamb flavor that had a freshness thanks to the parsley and bits of sharp crunch from the onion. They were damn tasty, but the real attraction was how crispy the outside got without a traditional sausage casing. These sheftalia felt more like a traditional link than any other uncased sausage I've made in the past. 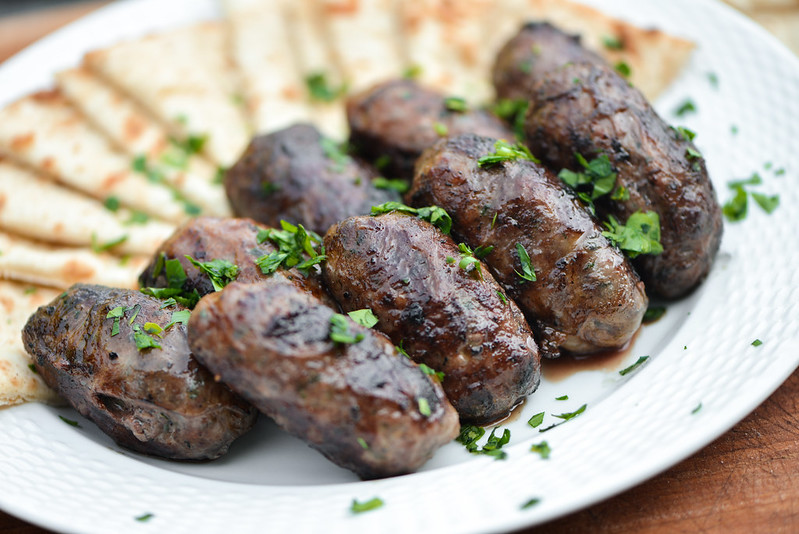 So there you have it, an uncased sausage that's quick and easy to put together at home and delivers a high-quality end product. I'm hoping this sheftalia recipe becomes a gateway sausage for many—a sausage that's simple enough to tackle at home, and then ignites a passion to just keep making more. 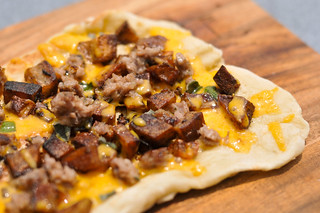