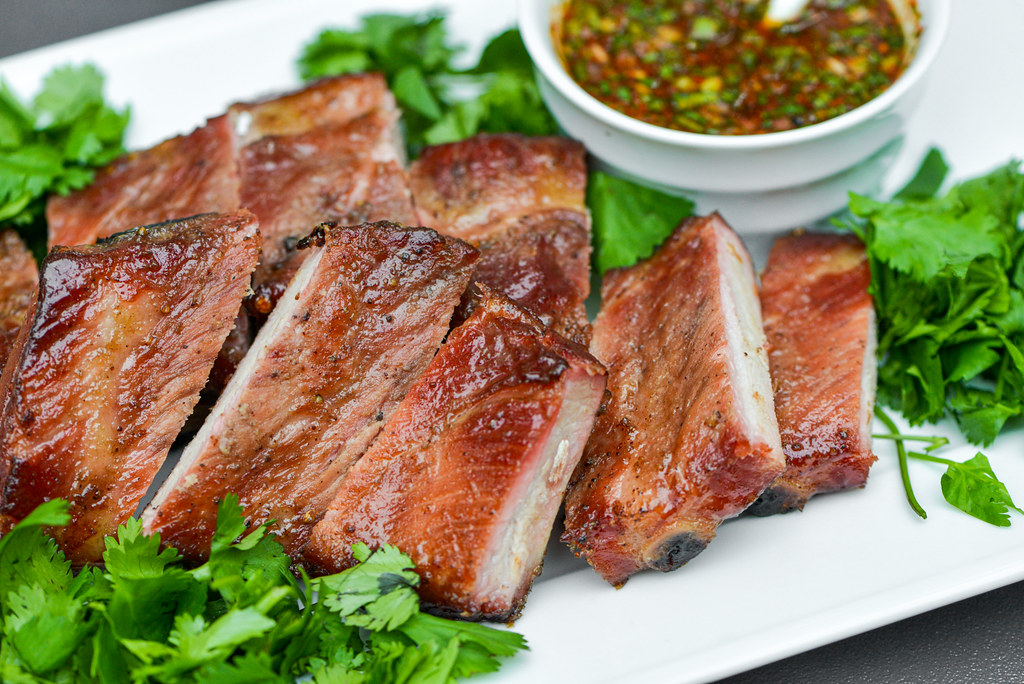 Many years ago, when I first got the Pok Pok cookbook by Andy Ricker, the pork ribs (sii khrong muu yaang in Thai) was one of the first recipes I looked for and wanted to make. My wife and I had these slightly sweet and savory ribs at Pok Pok and were really into them, so it was on my radar as something to learn to cook. I wanted to share my enthusiasm for them with friends and family though, so I was waiting for the right Meatwave to serve them at, but then the pandemic hit and left me in a waiting game. Eventually I decided I didn't want to wait any longer, so on a random day last fall, when I had the smoker fired up for another recipe I was working on, I decided to make good use of the heat and space and tossed a rack of these ribs in to enjoy for dinner that evening and was left very happy that I didn't delay getting these ribs back in my life any longer. 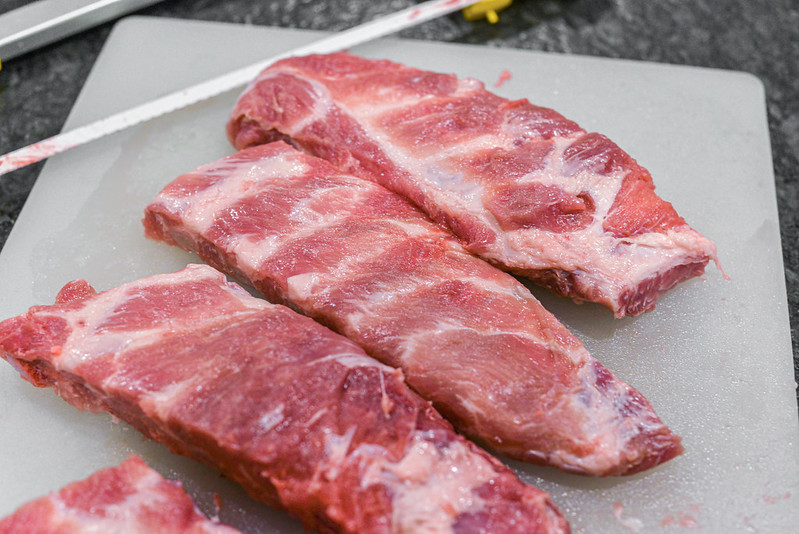 There was also another reason I put off making this recipe, and that was the need for racks cut into 2-inch portions. There isn't a local butcher shop in my town, so getting custom cuts can be a hassle, and, while it's common to find ribs cut in this manner at Asian markets, mine makes them much smaller in strips of about one inch or less. The easiest thing seemed like taking matters into my own hand, so I bought some clean blades for a hacksaw and butchered a full St. Lious-cut rack of spare ribs into 2-inch portions, which was actually easier than I was expected—the saw cut through the bones with ease. 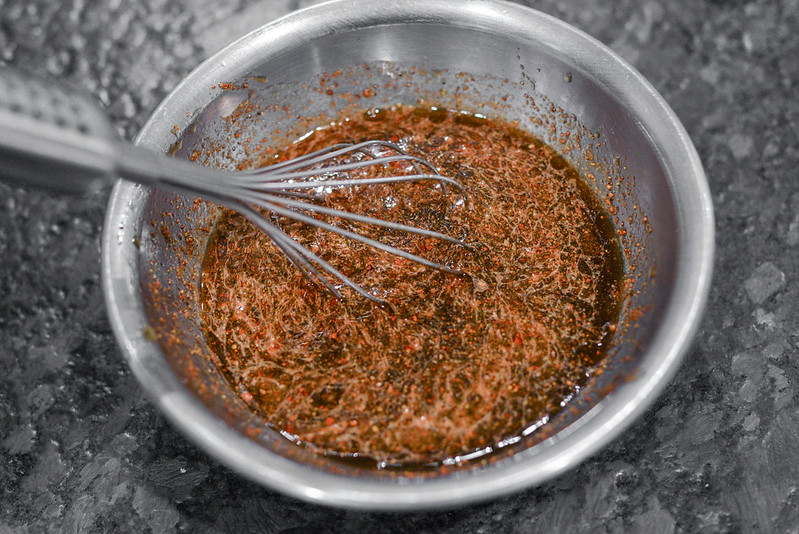 When I first experienced these ribs, I couldn't quite put my finger on what the seasoning was. They had a definite soy sauce savoriness with a touch of sweetness, but the seasoning was fairly light and that actually made the porcine flavor pop the most. Once I had the recipe to follow, it all made sense though—the marinade consisted of honey whisked together with soy sauce, Shaoxing wine, and ginger along with small amounts of sesame oil, cinnamon, white pepper, and nutmeg. 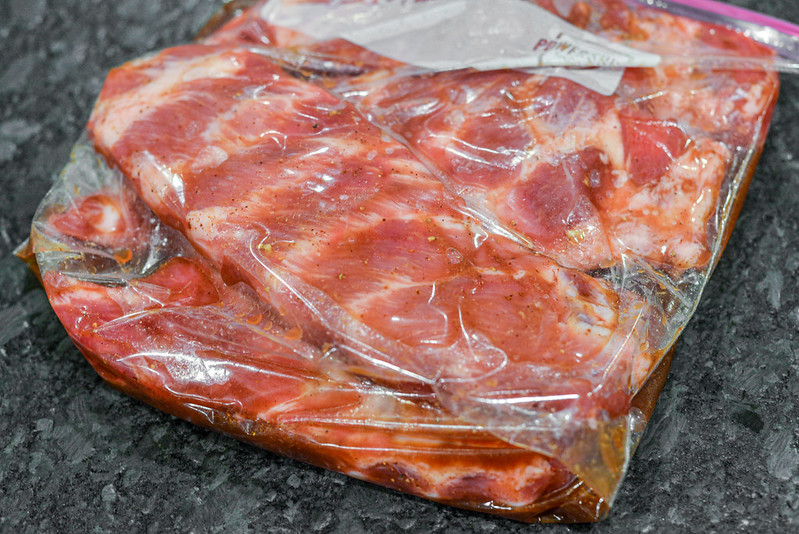 To marinate the meat, I placed the rib portions in a one gallon plastic bag and poured in the sauce. I then sealed the bag, removing as much air as possible, and tossed and massaged the ribs to evenly and thoroughly distribute the marinade. Then I placed the bag in the fridge overnight, but the recipe says you can go with as little a two hours of marinating time if you'd prefer to condense the process into a single day. 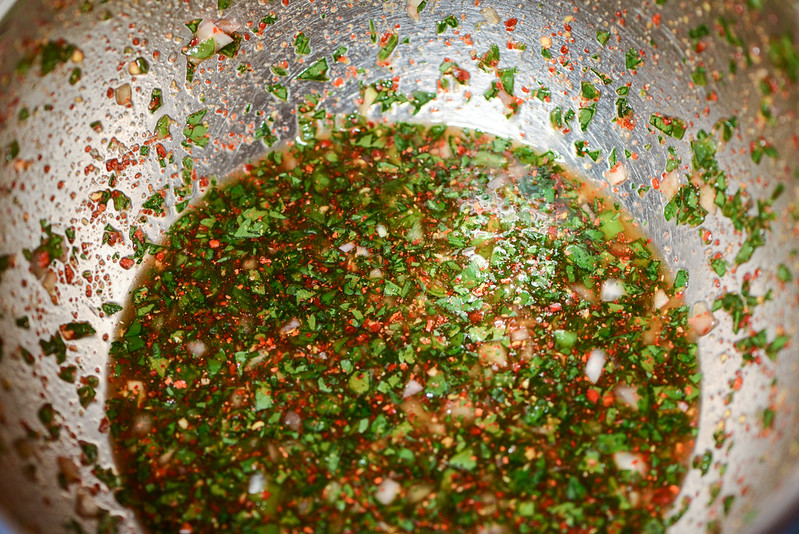 Like I mentioned, the ribs themselves have a fairly light touch, so where a lot of the flavor impact comes in is by way of a sauce. It seems like the most common one is nam jim jaew, which is a sour and spicy chili sauce found in Northeastern Thailand with its origins based in Laos. I actually make this sauce often, using it as a dip for steak and wings, so I simply relied on a recipe that has been tried and true for me which combines fish sauce and lime juice with a hearty amount of Thai toasted pepper powder along with cilantro, scallions, shallots, brown or palm sugar, and toasted rice powder. 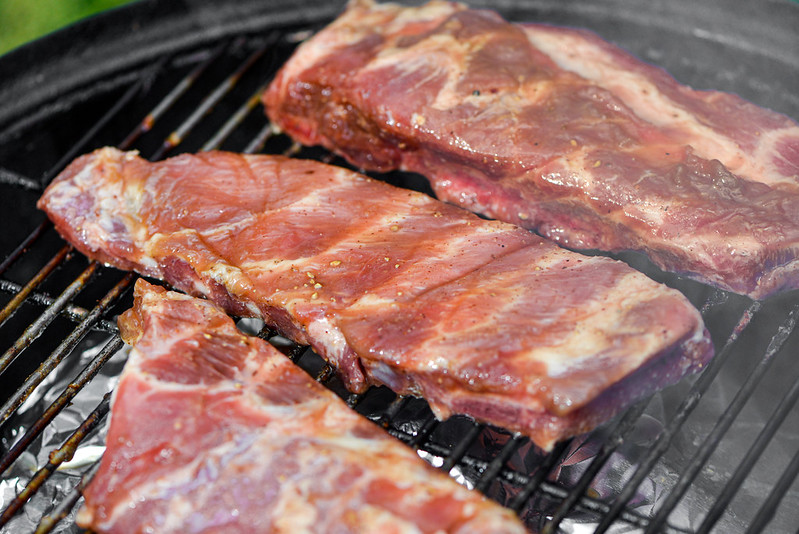 With the exception of the nam jim jaew, this recipe is pretty much unchanged from the Pok Pok book. The only point where I altered anything was the cooking time of the ribs. The original recipe had about a two hour initial cook, and then maybe another thirty to sixty minutes once you start basting. In my experience, spare ribs require a cooking time about twice as long in low-and-slow conditions, but I thought maybe the smaller size of the racks sped things up. I found that last part to be true, but still at a longer length than two hours. 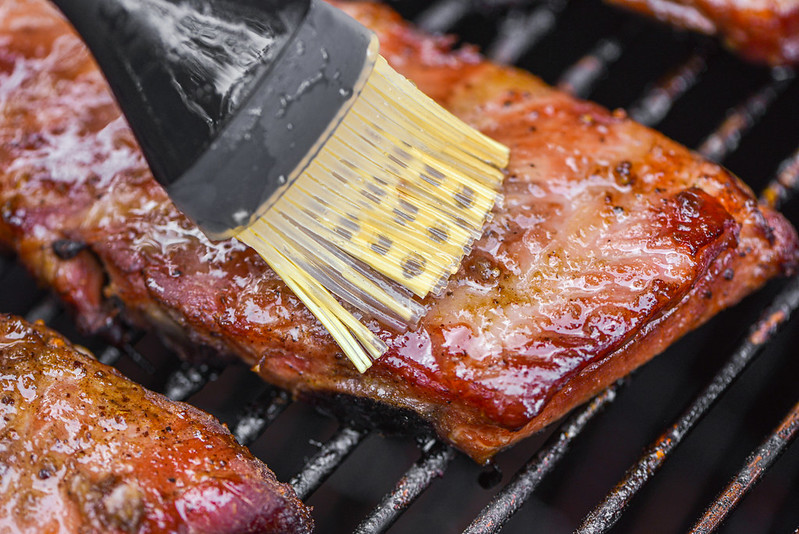 At about the three and half hour mark is when my ribs started to feel tender and had picked up a light mahogany color, which was still about an hour or so shorter than my standard barbecue ribs. When they got to this point, I began brushing the ribs with a honey and water mixture about every fifteen minutes, which deepened their light color to a more attractive reddish hue and added a slightly glossy appearance. 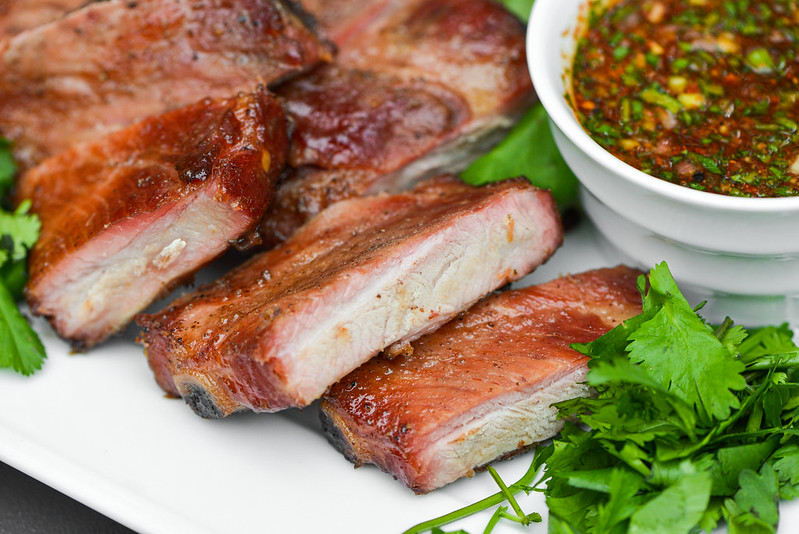 The time I had these ribs at Pok Pok was a pretty magical day, enjoying them during the downtime between a wedding ceremony and the party. So I think that may have elevated my initial experience, but these ones I made at home still delivered the goods. I remember a bit more salty savoriness to the ribs at Pok Pok than mine had, but that base components were still there with a light earthy touch and prominent honey sweetness. They really took off though when I spooned on the sauce, which had the heat and sour notes that attract me to Thai food in general. For me, that sauce addition was a necessity, but my wife enjoyed her little riblets sans sauce and was perfectly content, so these really work in both manners depending on your personal preference. I was left a little bummed that I wasn't sharing these ribs with all my friends, so these will need to go on repeat and make a proper appearance at a Meatwave in the future.