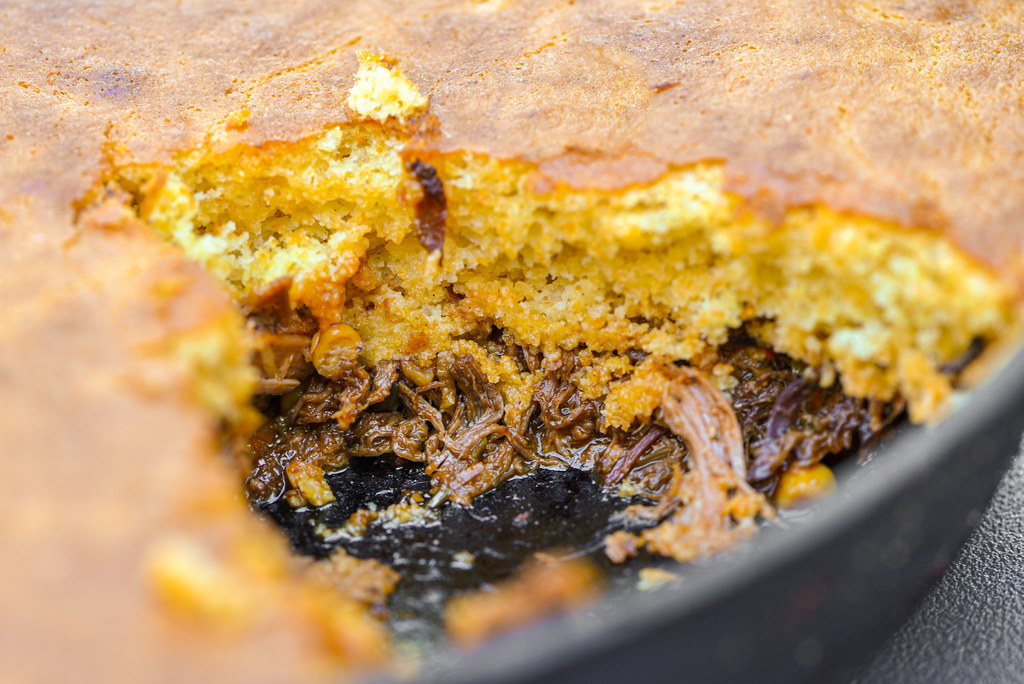 Pandemic cooking has resulted in me having leftover brisket in way I've never did before. I don't smoke brisket all that often, but when I do, it's usually when I have a crowd on hand and remnants tend to be minimal or nonexistent. During Covid times though, I didn't stop making brisket, but I did not have all my friends and family all gather to help me eat it like I normally would. So I've found myself with ample leftovers that has offered me opportunities for utilizing them in recipes in manner I haven't had previously. Last year one of my favorite products of this was a smoked brisket chili, and I wanted to do a repeat of that this year, but decided to take it a step further and turn that chili into a smoked brisket tamale pie. 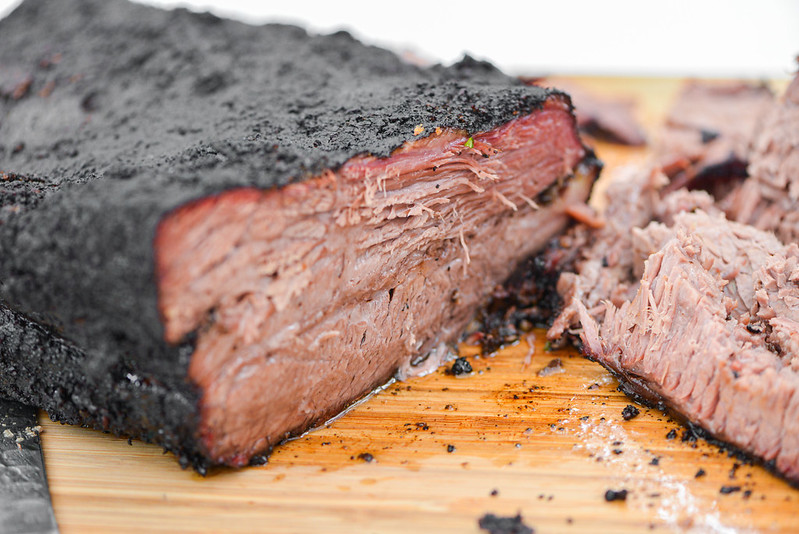 Not making brisket often has nothing to do with me preferring other things—actually, after beef ribs, brisket is my second favorite piece of barbecued meat. Its appearance is usually just a once-a-year thing due to the quantity and investment it requires, both monetary and in time. The fact that I do love it so, and no local barbecue joints make the Texas-style type I personally love, is what led me to still cook monster chunks of beef when I had very few people to help eat it. In 2020, it was just me and the wife left to consume a 17-pound brisket, while in 2021 I did have my immediate family gathered to help eat the one you see above, but I still had a couple two-pound chunks left that I vacuum sealed and froze. 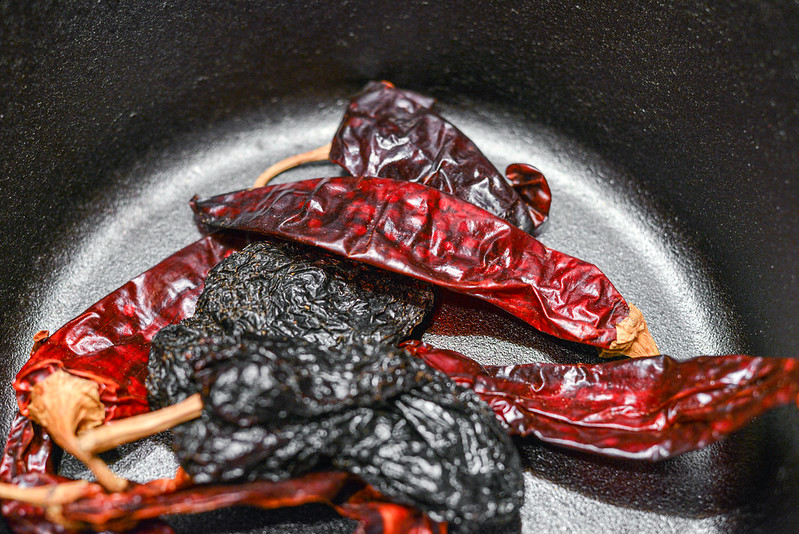 This tamale pie is in essence just two recipes already on this site married together. This first is a smoked brisket chili that I made last year, but with some additions to make the filling more like a standard tamale pie. The process started out the same with toasting New Mexican, ancho, and guajillo chilies until fragrant, then letting them steep in boiled water until tender, and finally pureeing them with a bit of the steeping liquid to form the chili base. 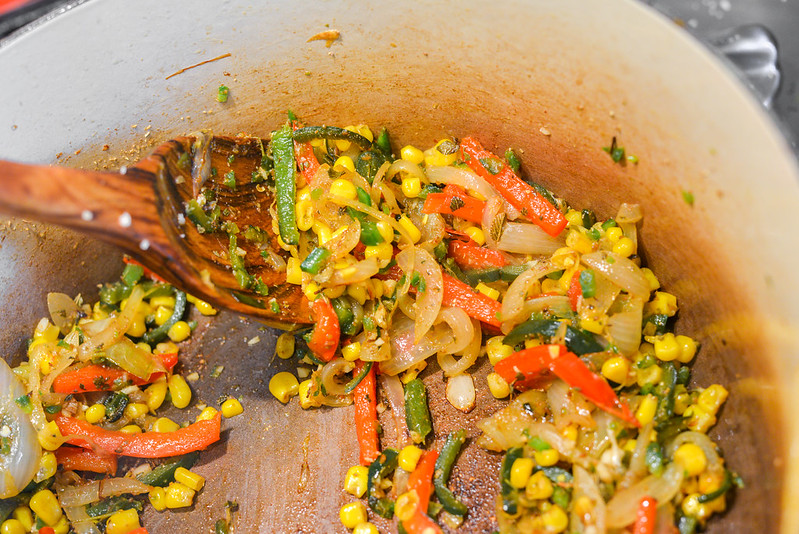 Where things changed a bit was in the veggie department. Instead of merely using chopped onions, I added in sliced red bell and poblano peppers which all got sautéed until tender. I then stirred in the new addition of corn, along with the spices and garlic. 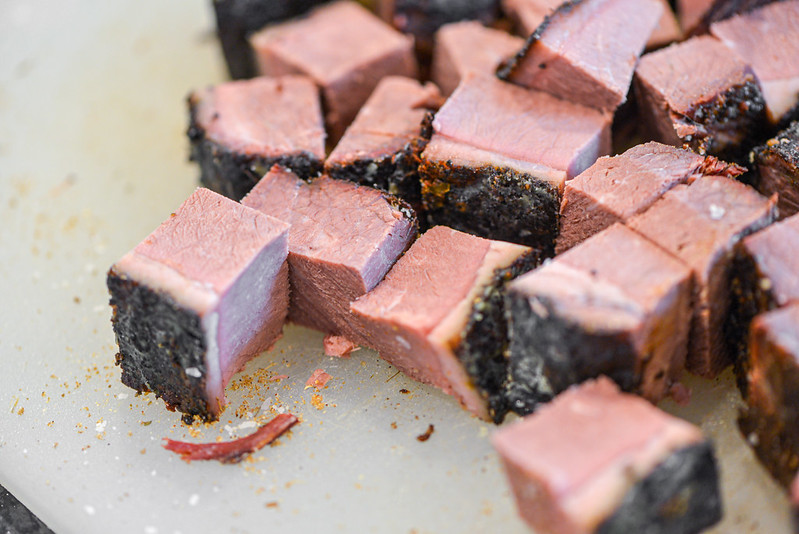 Prior to cooking that veggie and spice mixture, I prepped the brisket, which I had allowed to defrost in the fridge overnight. When cold, it was very easy to cut it up into large cubes roughly one-inch in size. A lot of the brisket breaks down and shreds after being braised, but some pieces remain in larger sizes, so I like going with the bigger cubes in order to achieve those textural differences. 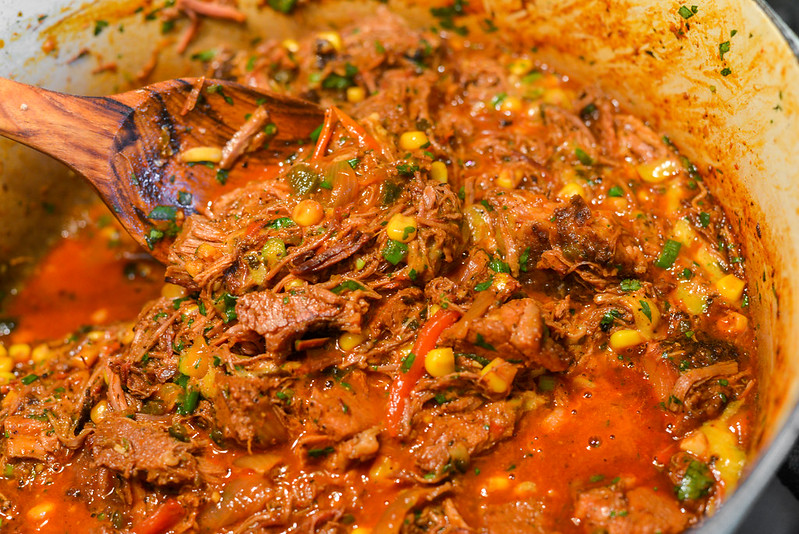 Once the veggie and spice mixture was does, the brisket was added into the pot along with the chili puree and chicken stock. I did cut back the amount of stock from my recipe last year to get a thicker chili better suited for the tamale pie. Since the brisket was already cooked, it didn't need the long braising time usually require for chili. Instead, in about an hour the beef was heated through and started to break down. At this point I finished it off with additions of cheddar cheese, scallions, and cilantro and then extra seasonings by way of Worcestershire sauce, fish sauce, lime juice, and salt. I then transferred the chili mixture to a 12-inch cast iron skillet to get it ready to be turned into a tamale pie. 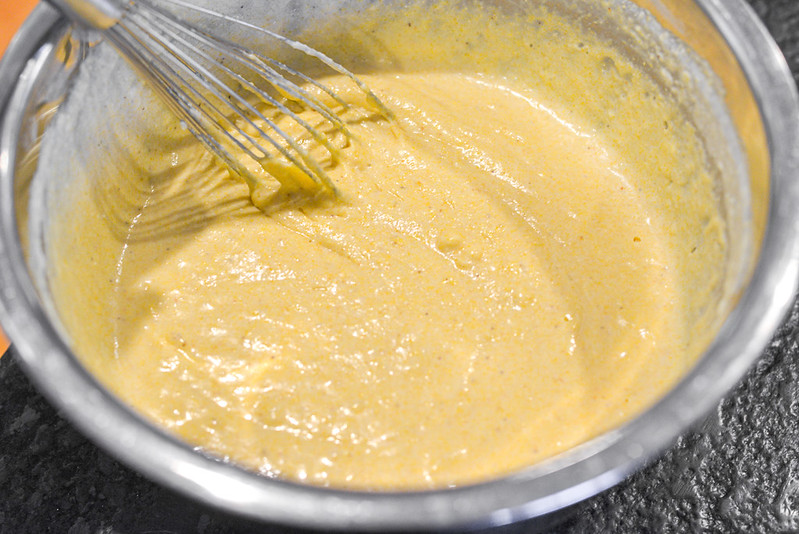 The second part of this recipe is merely the cornbread recipe I worked hard to develop many years ago and have been so happy with that I've never even tried another recipe since. This is a sweet and moist, almost cake-like, cornbread that I especially like as a contrast to the heat of chili. 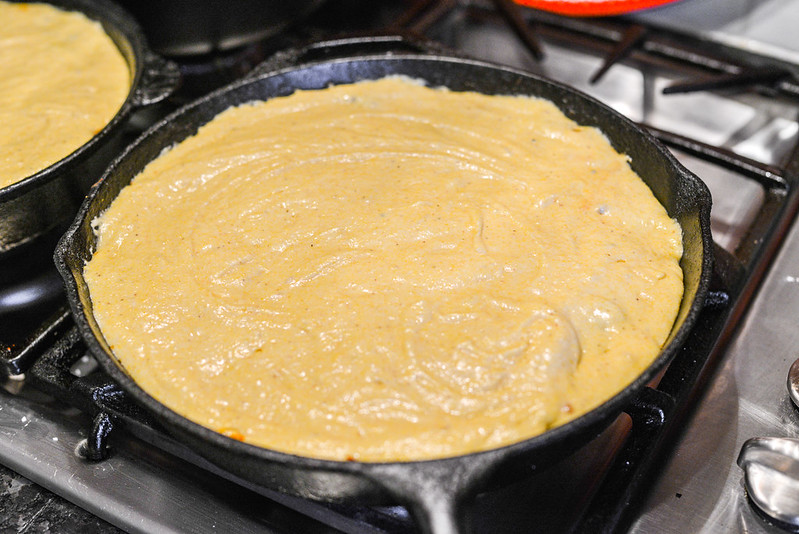 I wasn't quite sure how much batter I was going to need, so I made a full recipe intended for a 10-inch skillet thinking it would be way too much, but I actually ended up using almost all of it. I applied the batter on top of the chili in dollops first that I then spread out into an even layer prior to transferring the skillet to a 425°F oven. 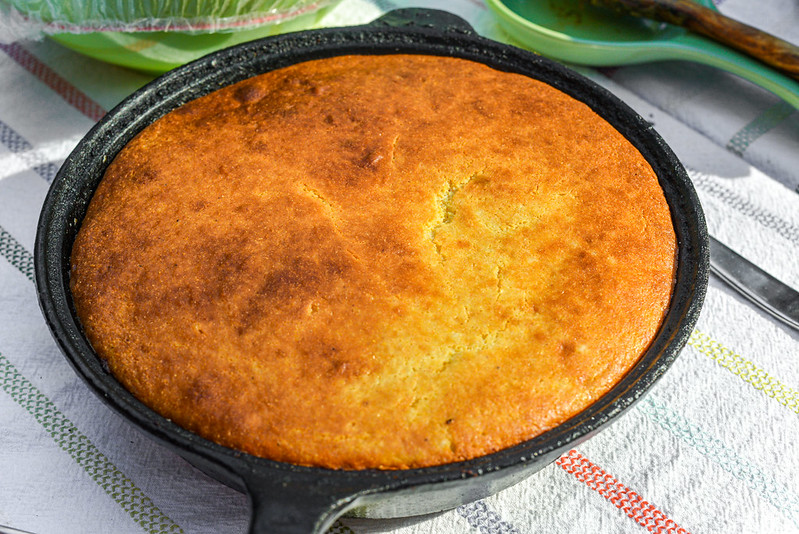 It took about 20 minutes for the cornbread to turn golden brown and I double checked its doneness by poking the bread with a toothpick and seeing if it came out clean. After removing from the oven, I let the tamale pie rest for about fifteen minutes prior to serving. 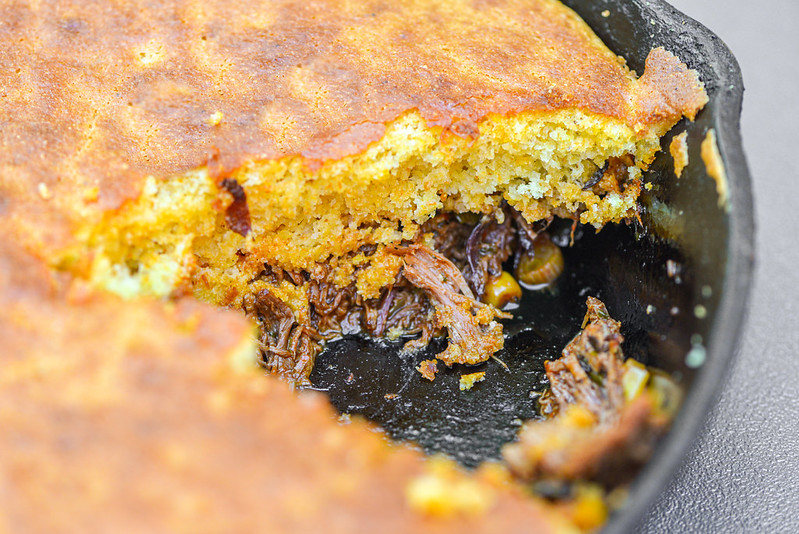 Unlike when I made the brisket, I actually had a decent gathering of folks to enjoy this dish. I served it outside on a crisp fall day and the flavors were a pretty perfect match for the weather with a warming and hearty chili base that had a noticeable smokiness that came through against the earthy character that had a good heat and mellow fruitiness. The brisket remained the centerpiece here, but the additional veggies did differentiate it well from the more straight chili I made last year. That helped with creating the tamale pie character, but the cornbread crust is what really cemented that experience. I often find myself strategically balancing my intake of cornbread when I eat a bowl of chili, but this tamale pie let me get some of the comforting sweetness with every bite, which I really liked. And with this tamale pie done, I'm down to my last bit of leftover brisket that I'm sure will find another great use that I'll be able to share with all of you. 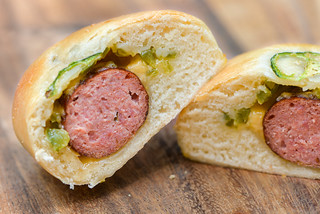