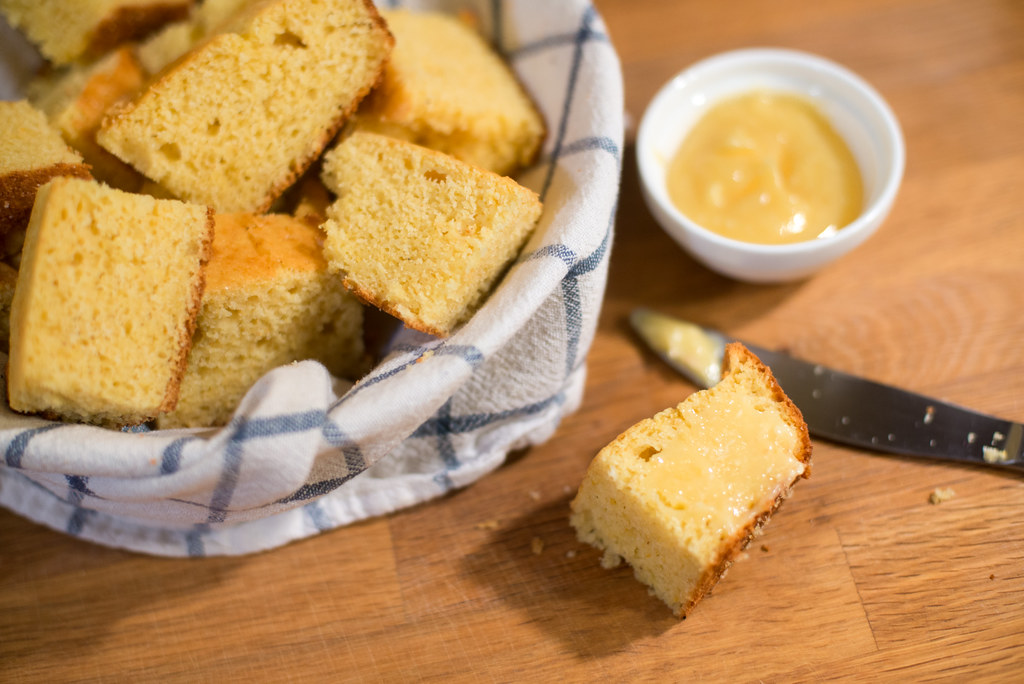 Back in college, I celebrated a cousin's birthday at the low-cost rotisserie chicken 'n' ribs joint Dallas BBQ. Don't let the name fool you, you won't find old fashioned wood burning pits out back at this New York-based institution—it was the"Texas-sized" frozen margaritas that were our main draw. As the meal came to an end, we requested a cake and candle (little more than an excuse for our inebriated group to sing "Happy Birthday" as loudly and off-key as possible). The waiter promptly returned with a slice of cornbread, topped with whipped cream and a sole lit candle. We all kind of laughed at the "cake," but as we ate it, it didn't feel so out of place.

Their cornbread was sweet, moist, tender, and springy—very much like a cake after all. The namesake corn flavor was there, but not in a way that made a dollop of whipped cream feel out of place. As a Northerner, this was the exact type of cornbread I grew up on.

In my early days of barbecuing, I thought I needed to go for authenticity and started experimenting with Southern-style cornbread for my cookouts. But those denser, drier, and more intensely corn-flavored loaves never sat quite right with me. So I abandoned them pretty quickly and instead fully embraced the Northern-style cornbread that I know and love, in all of its sugary glory. 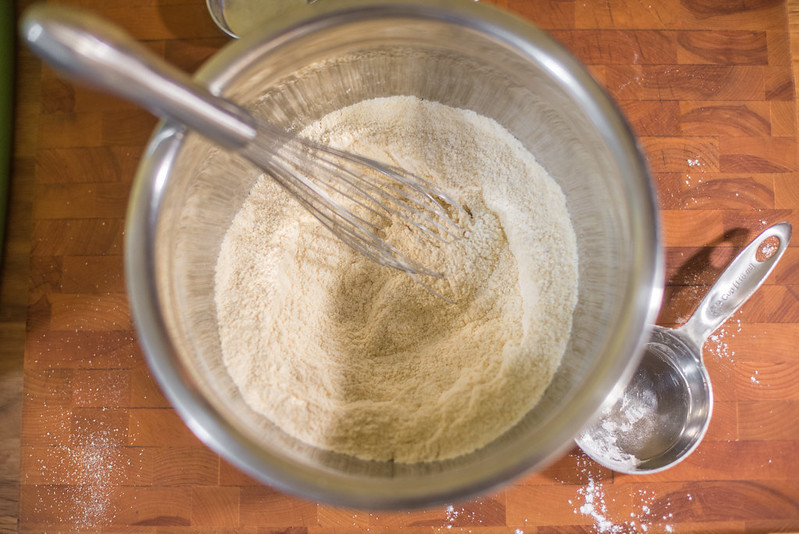 I have a trusty cornbread recipe that I've relied on for years. But while consistent, it's far from the best, and lacks the flavor and lightness that define my ideal cornbread. I finally decided it was time to aim a little higher and really perfect it. 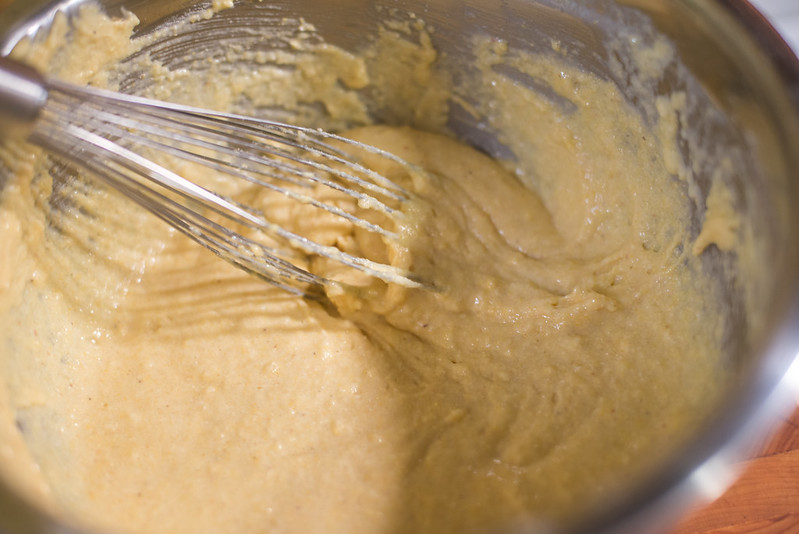 I started with the basic makings of a Northern-style cornbread. A 50/50 mix of yellow cornmeal and flour gave it the right flavor, color, and consistency; buttermilk added a nice tang; baking powder and soda created lift; and eggs were required for structure. I put my first recipe together by combining the dry ingredients in one bowl—cornmeal, flour, baking powder, baking soda, salt, and about a quarter cup of sugar—and the wet ingredients in the other—buttermilk, eggs, and melted butter. 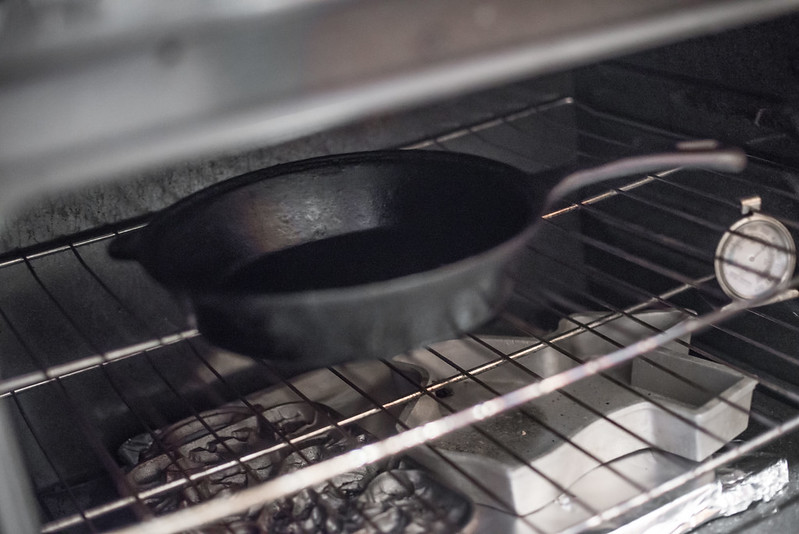 Meanwhile, I had a 10-inch cast iron pan preheating in a 425°F oven, to capture the part of Southern-style cornbread that's really great: the crust. An almost crackling, deeply browned, flavorful crust is definitely key to my ideal cornbread, and a cast iron skillet is a traditional and attractive, way to achieve this. 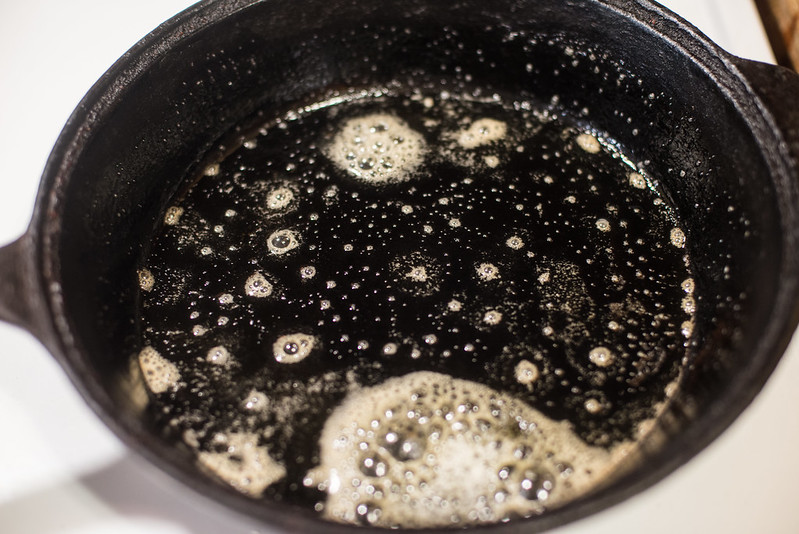 Once the pan was as hot as it was going to get, I combined the wet ingredients with the dry, removed the skillet from the oven, and dropped in a tablespoon of butter. The butter quickly melted and browned as I swirled it around; once the pan was well coated in butter, I poured in the batter. 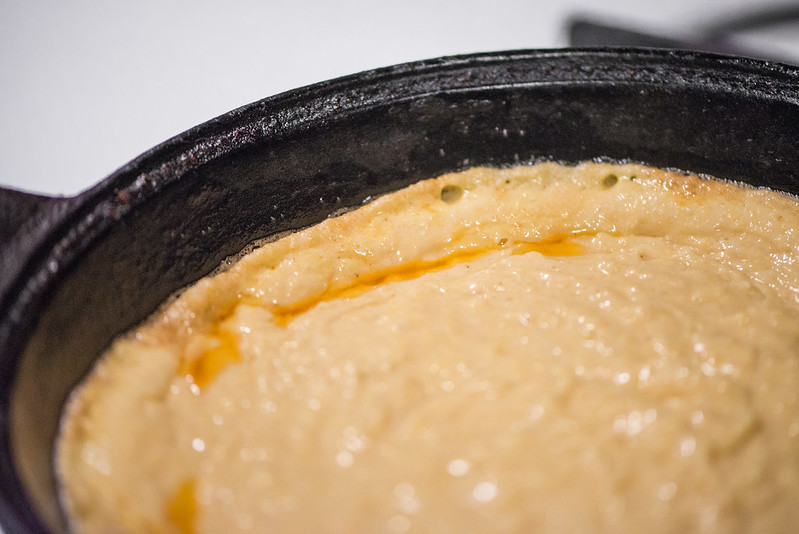 In the short time between adding the batter and returning the pan to the oven, the edges of the cornbread had already begun to set, which was exactly what I wanted to see. 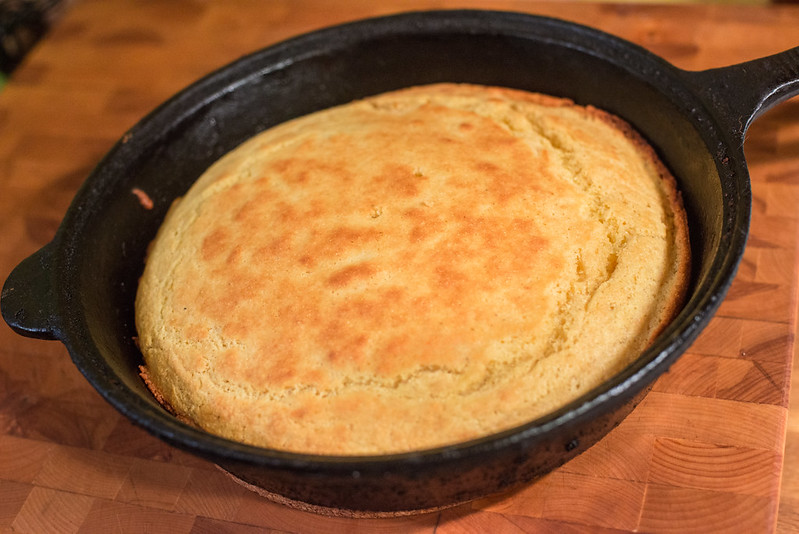 It took about 20 minutes in the hot oven for the cornbread to fully cook—I tested doneness by inserting a skewer into the middle and checking to see if it came out clean. I let it cool in the pan for five minutes to give it some time to firm up, and then used an offset spatula to lift it out of the pan and onto a wire rack. I let it rest another ten minutes, during which the crust cooled nicely while the bread itself stayed pretty hot. 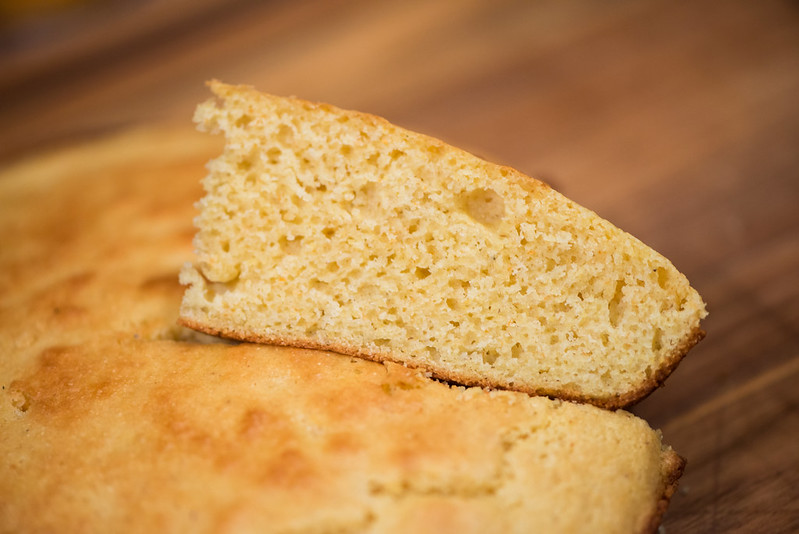 The result was a good cornbread, but not a great one. First, it didn't rise enough. It was moist, but not as tender as I'd hoped. It also lacked the signature sweetness I was looking for, while the corn flavor was very prominent. The crust was perfect though—crisp with a little nutty flavor from the browned butter. 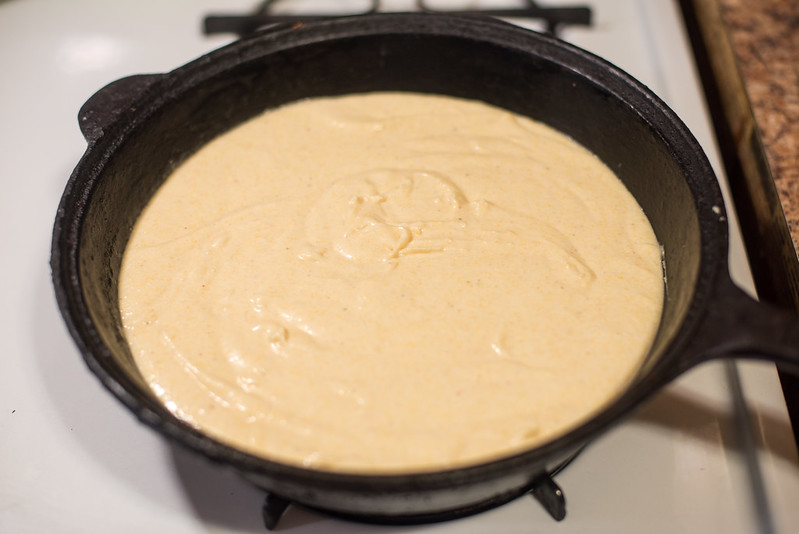 Since that first attempt just wasn't cakey enough, I went full-on cake for my next test. I upped the sugar to half a cup and swapped the all-purpose flour for cake flour, which should give it a more tender crumb. I also switched from buttermilk to sour cream—a trick I've been using with my biscuits. The higher acidity of sour cream not only adds a tangier flavor, but it also helps the baking soda achieve an even greater rise. Its extra fat content serves to keep things more moist and tender. I also wondered if the denseness of the earlier bread may have been caused by cooking method, so I started this one off in a cool, greased skillet, more like a cake.

As I watched this loaf bake, I saw it rise dramatically higher than the first, and felt I was on to a good thing. With lean, yeast-risen doughs like pizza or bread, high heat is essential for a good rise—its what causes the interior bubbles to rapidly expand before the dough can set.

But with a moist batters that rely on baking soda or baking powder for leavening, the opposite tack is the way to go: with a slower bake, you give the chemical leaveners more time to produce bubbles of gas. Meanwhile, you don't need to worry about the batter setting too quickly, as its high moisture content ensures that it'll stay soft and inflatable for far longer than a typical bread dough.

The color never reached as dark a yellow as other cornbreads I've made in the past, but I wasn't sure if that was necessarily a bad thing. 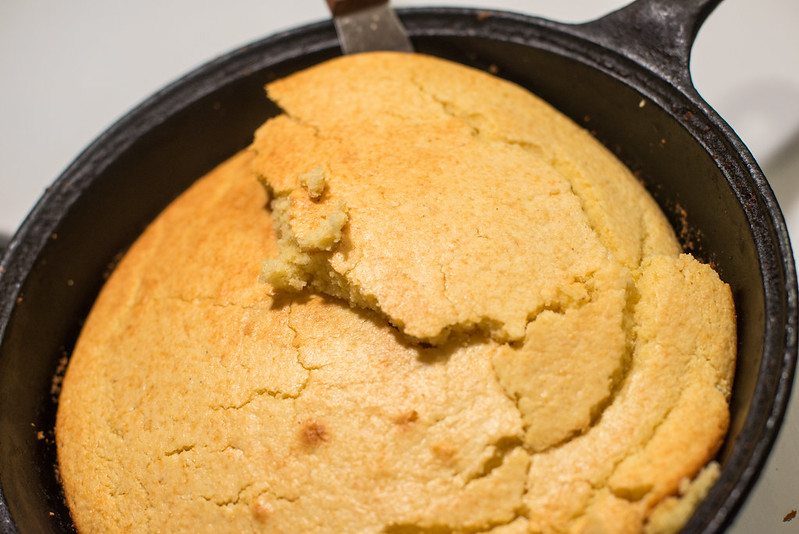 After the bread was done and rested, I went to lift it out of the pan, but it was so damn tender that it fell apart. 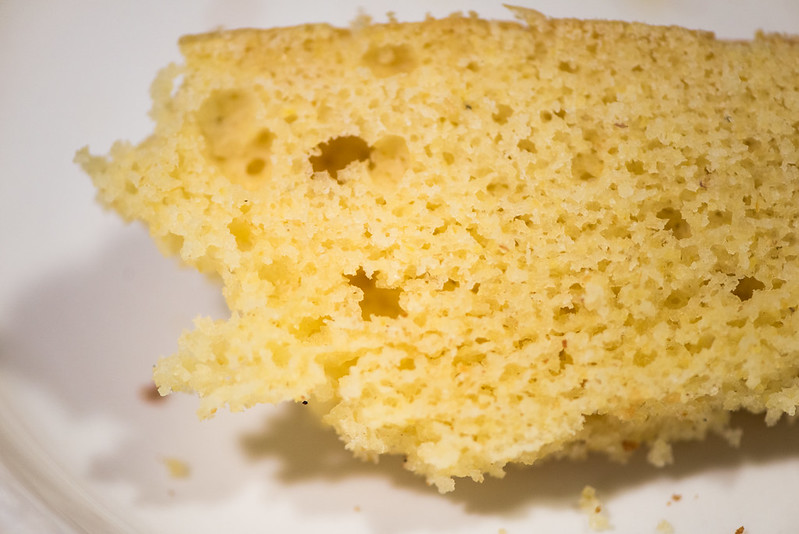 It only took one bite for me to realize this was hardly a "bread"—what I'd made was most definitely corncake. The texture was super light and moist, the flavor sweet, mildly corny, and a little tangy. It was really really good, but as I chomped down on a few broken pieces, I knew this simply couldn't qualify as cornbread. But I also felt that there was enough going for it that I was getting a whole lot closer to my ideal. 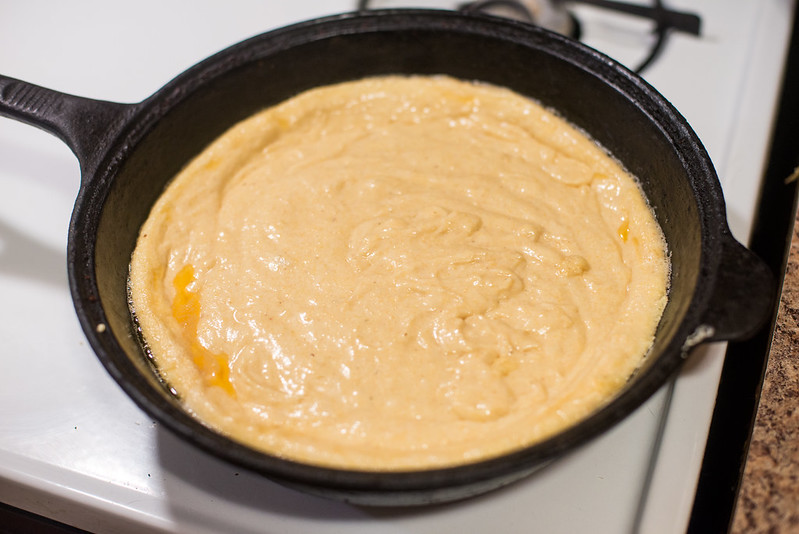 So I wanted my cornbread to have the lightness and moistness of the cake without it being so... well... cakey. First was the obvious reversion to all purpose flour. I kept the sour cream, but reduced the amount and increased the buttermilk slightly. Finally, I decided to try adding in a couple tablespoons of canola oil, since fat can help keep cakes nice and moist. I also had lost the great crust of first cornbread, so I went back to using the preheated pan with browned butter, hoping that the alterations in ingredients would help compensate for any loss in rising. 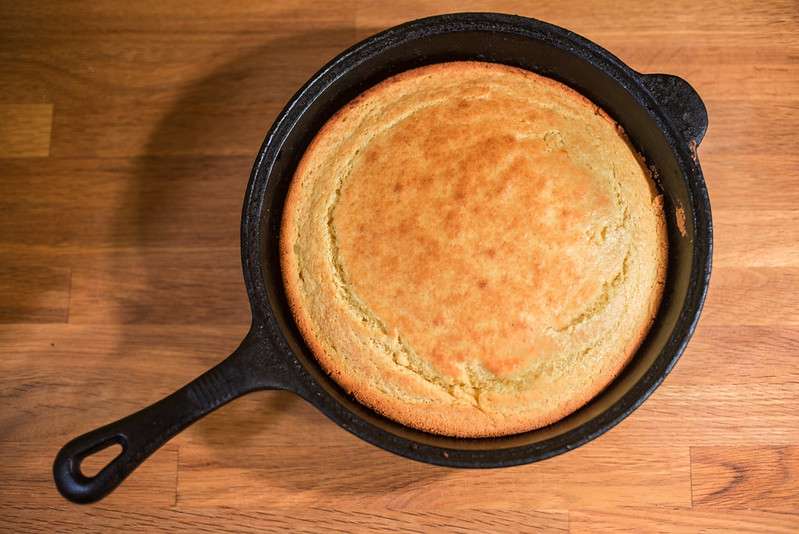 Everything looked promising: this one rose higher than the first, although not as much as the second. I got back the golden yellow color too, which made me happy. To keep this one intact, I turned it out onto a plate and then transferred it to onto a wire rack. 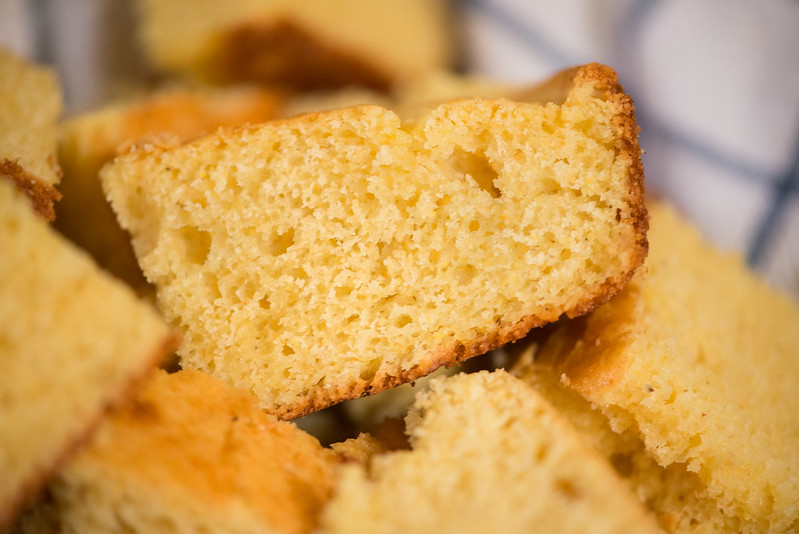 After letting the crust set up and cool, I dug in and was all too pleased with the results. The cornbread was light, tender, and moist—it perfectly straddled the line between cake and bread, without crossing it. It had a very nice, sweet corn flavor with an undercurrent of tanginess. And the crust was as good as ever, with a crispness and depth of flavor that sealed the deal.

I could have topped this with whipped cream and a birthday candle and it would have worked, but that would have robbed it of its true purpose: sitting next to a plate of ribs or pulled pork, where sweet corn flavor creates the perfect contrast to spicy, tangy smoked meats. 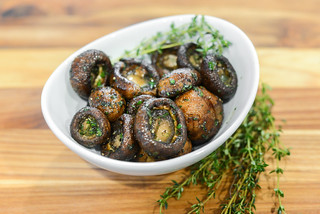