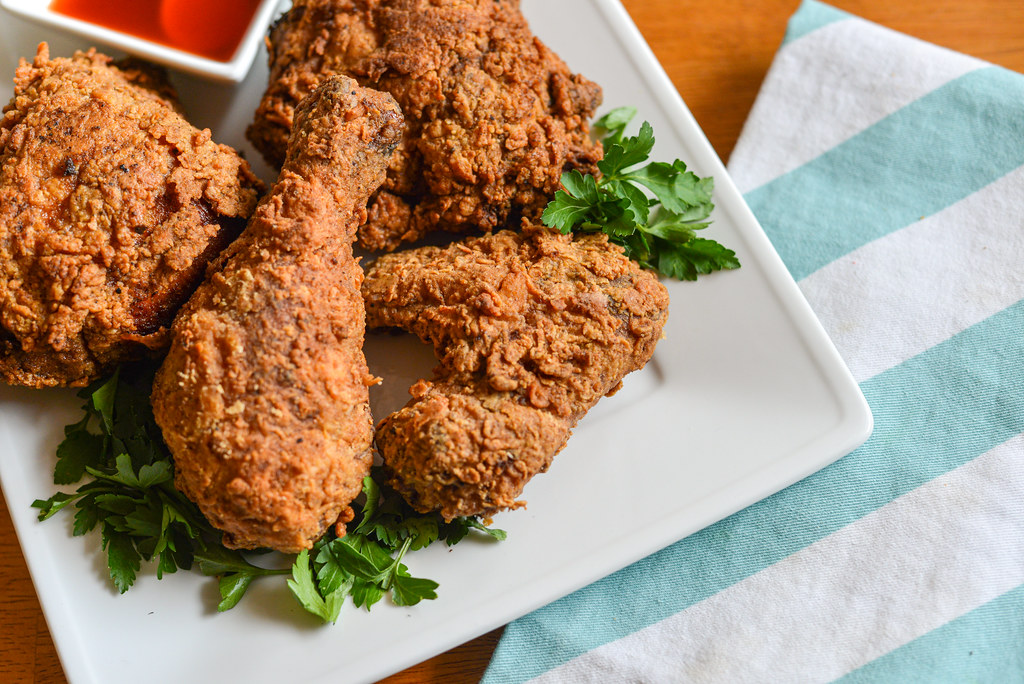 I've been doing a number of recipes lately that utilize chicken that's first smoked and then becomes part of a somewhat different dish in the end. Smoked Buffalo chicken potato skins and smoked curried chicken salad are good examples of this, and in developing this type of recipe, I've become well versed in making chicken that stays really juicy through multiple cooks. With a confidence in my chicken smoking abilities well built up at this point, I thought it was time to tackle something I've long wanted to do, but knew would be a somewhat difficult recipe to get right—smoked fried chicken. 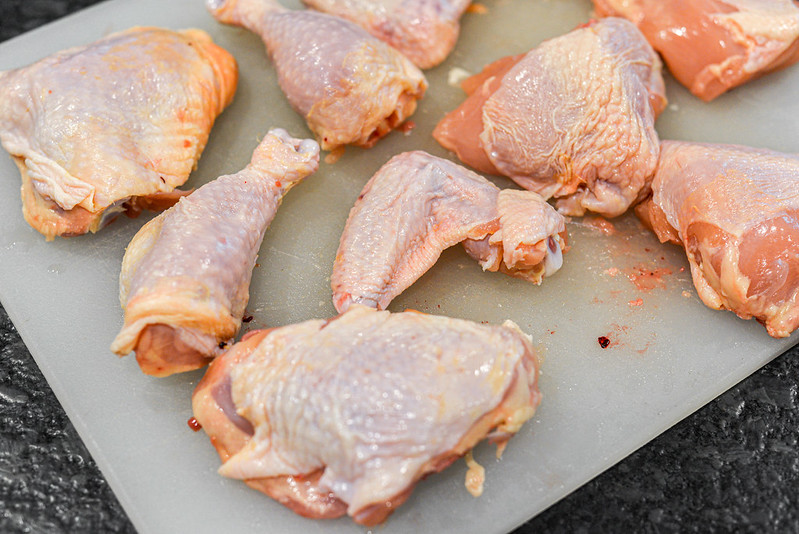 While I feel confident in both my skills at smoking and frying chicken, the need to double up on the cooking processes presents a challenge in getting a chicken that tastes smoked, but is also super juicy and crispy like fried chicken should be. I didn't feel like I would hit the nail on the head on the first try, but I had to start somewhere, so I set forth on this journey by first butchering a whole chicken into individual pieces. 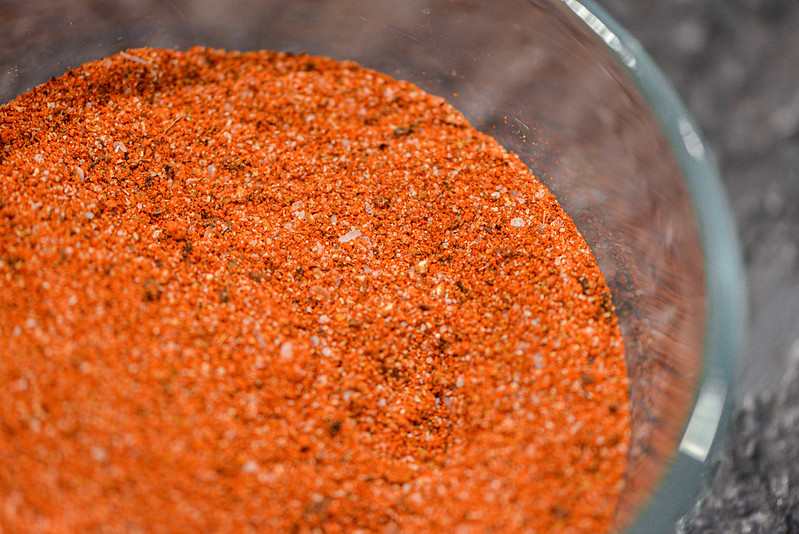 I thought that if I'm making a mash-up type of recipe, I might as well go all in on that direction and decided to make my chicken seasoning in the fashion of a barbecue rub. To be honest, fried chicken seasoning isn't all that far off from a barbecue rub in the first place, but the ingredient list in this recipe is going to be a little longer than a traditional fried chicken recipe because it adds in more depth with spices like celery salt, cumin, and mustard powder. 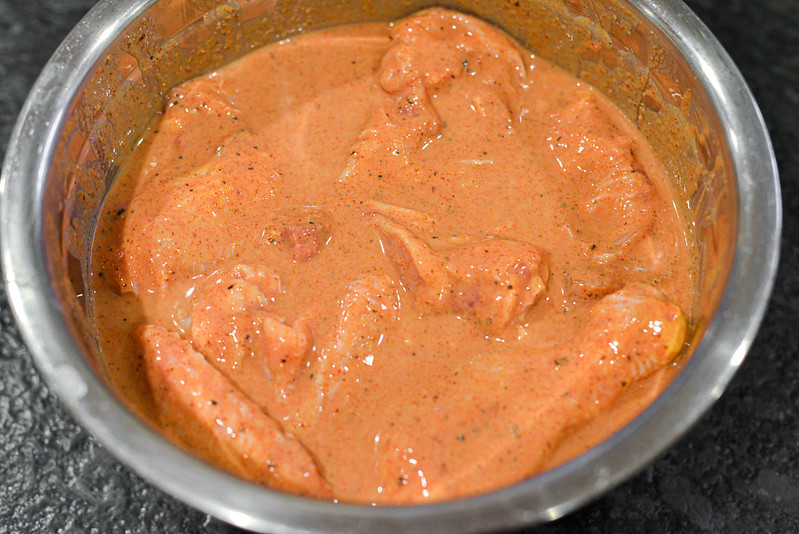 I made enough seasoning to do double duty in flavoring both the brine and flour dredge. For the brine, I went with the standard buttermilk here which, once mixed with the salty seasoning, would be the first step to injecting extra moisture into the meat to hopefully ensure it would come out on the other side with nothing but juicy results. 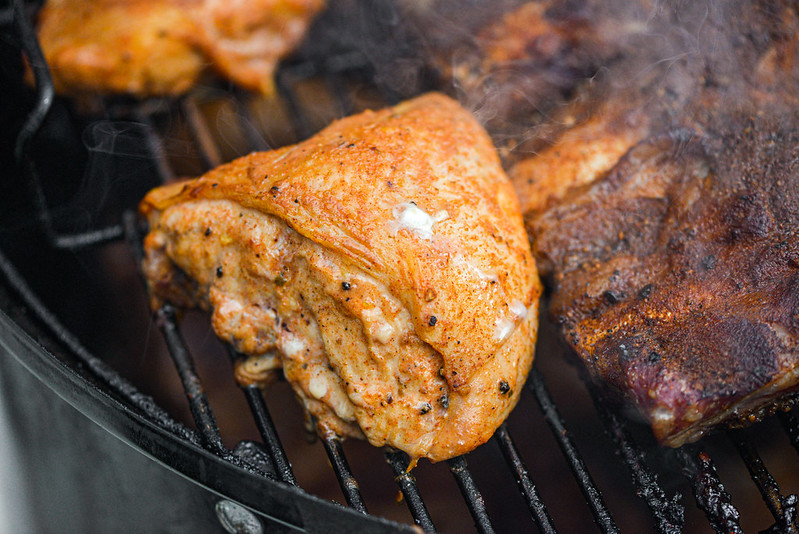 I let the chicken brine in the fridge overnight and the next morning I fired up my smoker to 225°F and tossed a couple pieces of apple wood on the fire. Once things were smoking well, I placed the chicken in, covered, and let it smoke. 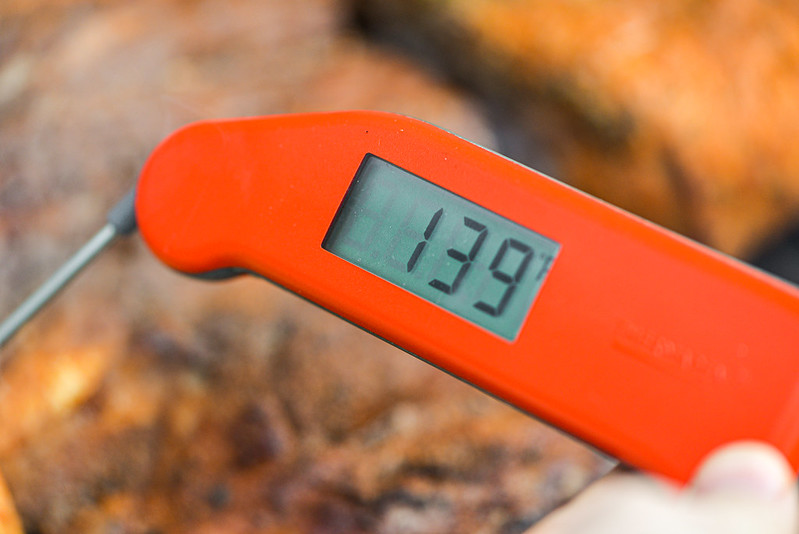 The next insurance policy I took out to get moist chicken was to undercook it. I like cook my chicken 10 to 15°F less than the FDA recommendations already, but this time around I pulled it off the pit at an even lower. I was looking for an internal temperature of between 135-140°F in the breast meat, and 145-150°F in the thighs and legs. Knowing that the chicken would be cooked again to a higher temperature, I had no real food safety concerns with this, and it felt like the right amount of time for the chicken to pick up a good smokiness since it reached these targets at just over an hour of cooking. 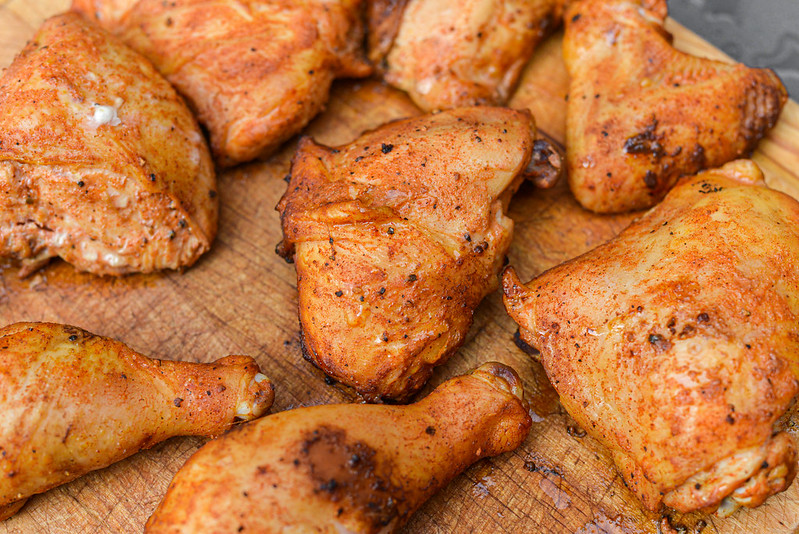 I was kind of expecting the meat not to have picked up good coloring at this point, but I was left happy that it also came out of the smoker with a healthy orange hue, even if that was going to be covered up by breading later. I actually smoked this chicken the day before frying, so it went into the fridge next, but you can certainly move right on to frying after letting it cool down a bit if you wish, and that might actually solve one of the issues I ended up having with the final recipe. 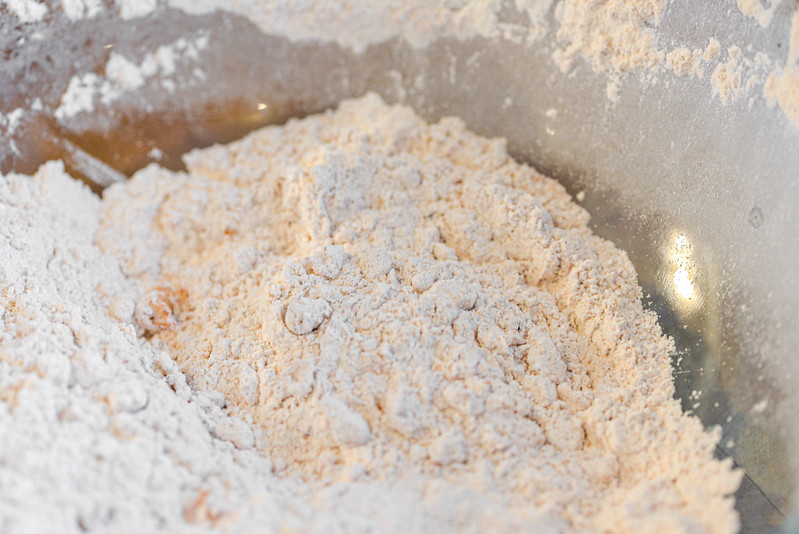 When it was time to fry, I first removed the chicken from the fridge and let it sit out while preparing everything for frying. I next made the dredge which had a flour base mixed with cornstarch, baking, powder, and the remaining two tablespoons of the barbecue seasoning mixture. I then drizzled some buttermilk over the flour and worked it in with my hands until it developed a kind of wet sand type of feel. What this procedure does is creates some small flour clumps that will give the coating that craggy texture and extra-crispiness. 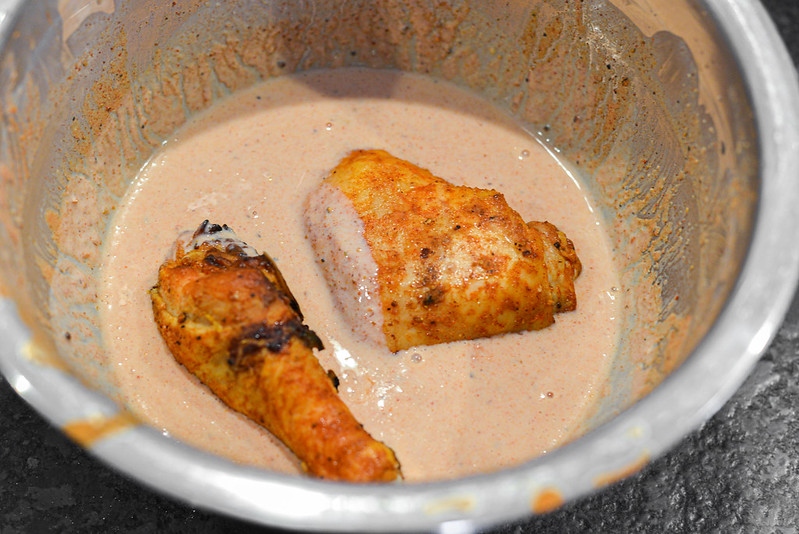 When smoking the chicken, I decided to reserve the brine because it seemed like I could make good use of it to dip the chicken into to give the pieces that initial wet coating needed for the flour mixture to adhere. There wasn't a ton of brine leftover though, so I added in more buttermilk, which is why its lighter in color here than it was in the brining photos above. 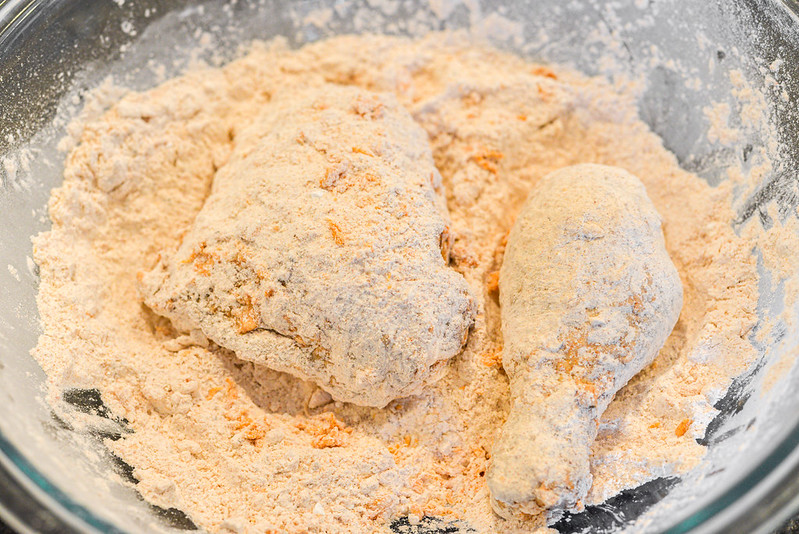 Lastly, I heated up oil in my wok to 375°F and then jumped into the business of coating the chicken. After a dip in the brine, I let excess buttermilk drip off, then transferred the chicken to the seasoned flour. I made sure the coating was complete and thick by tossing the chicken around a few times and then patting it lightly to ensure adherence. 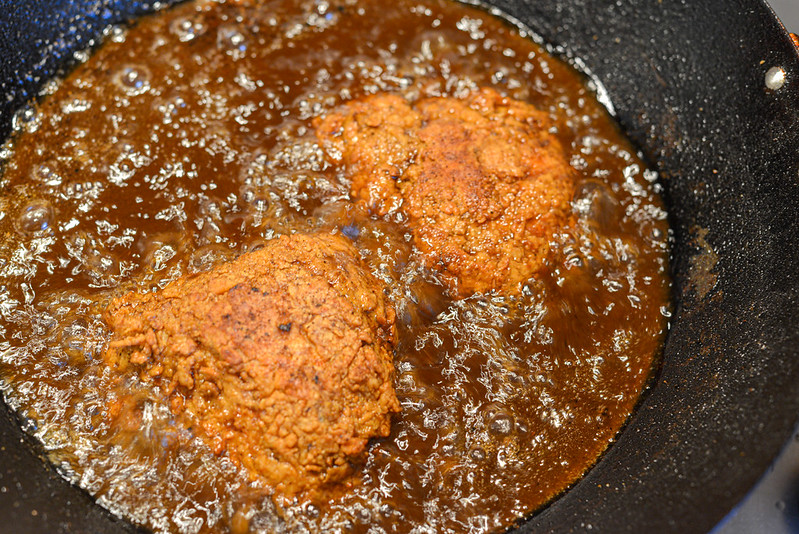 The into the hot oil it went. This wasn't total deep frying, so not all the chicken was submerged in oil. This required me to let the chicken brown on the first side, then flip and brown on the second side. I then continued to flip the chicken occasionally until it was evenly browned all over. I figured the hot oil bath would have reheated the chicken well, but I found the center of the larger pieces were not hot throughout, which led to me place those pieces on a wire rack set in a baking sheet and transferring them to a 325°F oven until they reached the proper temperature. I think if you were to fry without chilling the chicken after smoking it, this may not be an issue, which could be the advantage I mentioned earlier. 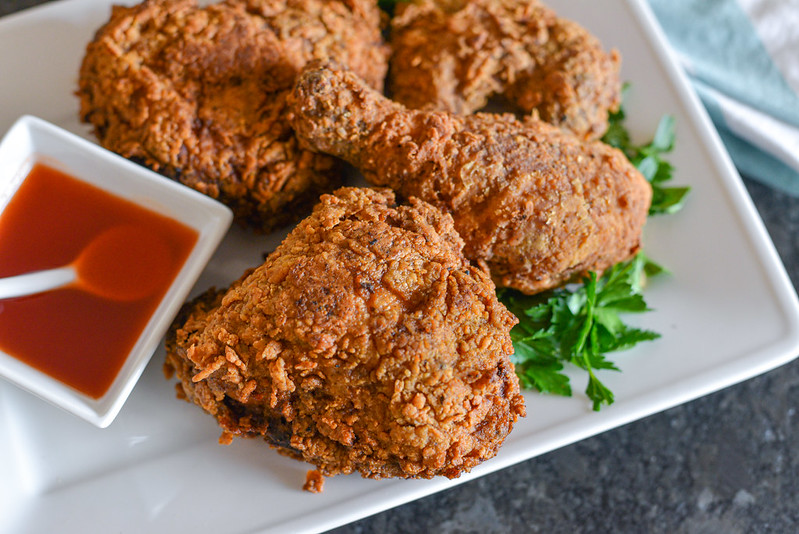 I've made my fair share of fried chicken, so the fact that it looked so good wasn't the surprise here, it was the taste. I'm not convinced that surprise was totally a good one though—as I bit into my first piece I was taken aback by the smokiness as it's not something I was expecting my fried chicken to taste like. I guess that means the recipe worked on a technical level—it was smoky, juicy, and crispy, which was everything I set out to accomplish—but it also felt confusing at the same time. I thought what might be missing here is a sauce, so I whipped up a favorite fried chicken sauce that I learned from a local joint called Picnic that's a simple mixture of honey and Texas Pete and dipped my thigh meat into it. That really rounded out the flavor for me, adding a sweetness and spice that helped mellow the smokiness and make the chicken taste more fully realized. If you undertake this recipe, I feel confident it will make some great fried chicken for you, but also go into it knowing it may also not be for everybody. I feel like this just offers me another challenge though in trying to make a smoked fried chicken recipe that gets in a smokiness while also maintaining a base flavor that doesn't suffer any type of identity crisis at the same time. 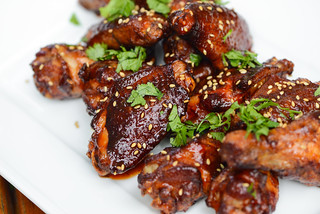