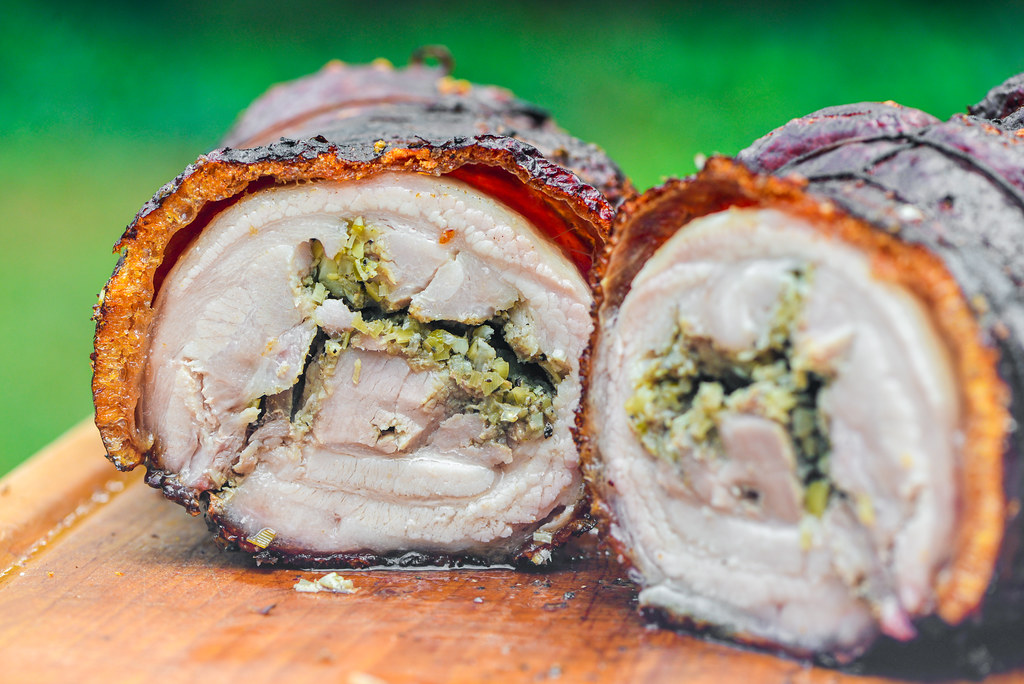 Looking back, my first attempts at grilled pork belly were woefully lacking. I feel a little bad those recipes still live on and folks might use them because I now know how to make far superior specimens, including ones with incredible crackling skin. One of the best pieces of pork belly I ever cooked was a smoked porchetta last summer, and my guests definitely agreed with a few of them bringing up that dish again and again. Needing content for the blog means there aren't a lot of repeats at my cookouts, but I had a desire to relive the greatness of the porchetta this summer, so simply made the same recipe, but changed up the seasonings to be Filipino-based and ended up with another incredible output—smoked lechon liempo. 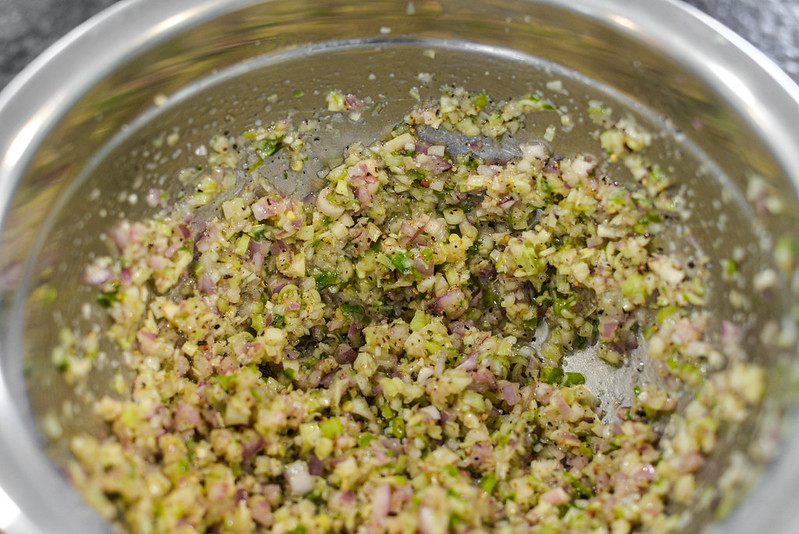 Lechon liempo—roasted pork belly—was actually one my first true sucesses with this cut, getting both luscious meat and crispy skin by utilizing my rotisserie attachment. While the meat was great, the seasoning was a bit underwhelming, so this time around, I amped it up with both larger quantities and more ingredients. Garlic and a little vinegar were really the primary seasonings in my first recipe, and those are requirements for a base Filipino flavor, but I expanded on those by also adding lemongrass and shallots. 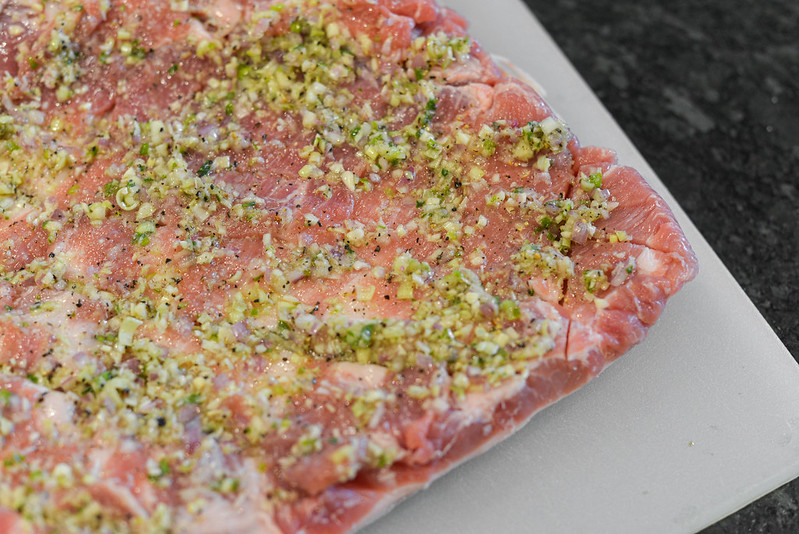 To infuse the pork with this more potent seasoning mixture, I first laid out my skin-on pork belly, meat side up. I then scored the pork in a crosshatch patten to create crevices for the seasonings to creep into. Next I took the lemongrass mixture and spread it evenly across the meat, massaging it a bit as I went in order to get the seasoning into those cuts. 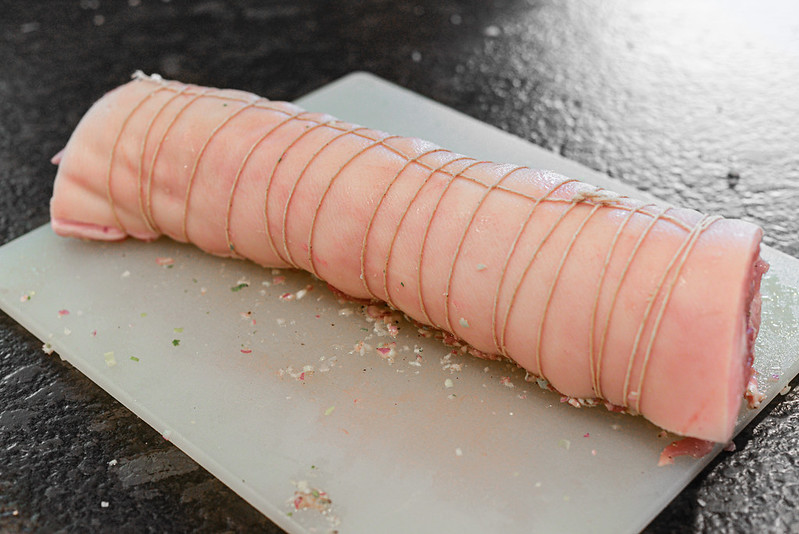 Once done, I rolled the belly up lengthwise and secured it close with butcher twine at about every inch. When I made the porchetta last year, my wife snapped a great photo of me carrying it around the house like a proud father nestling his child. I couldn't resist doing the same thing this time, bringing my pork roll to the basement to show it off to the wife, although it didn't play as well the second time around. 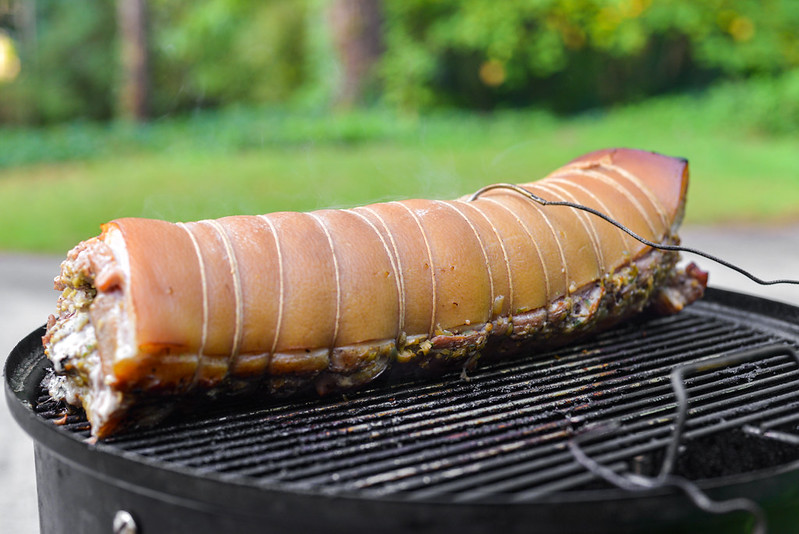 Up to this point, this lechon liempo recipe is fairly traditional, but a little American influence came in next with my choice to smoke the pork. I attribute one of the reasons why my bellies have been more consistently good is to cooking them low and slow. Like pork butts, briskets, and ribs, pork belly has a lot of fat that both melts and becomes soft and supple when cooked in either low heat or braising situations. If I'm using the smoker, I see no reason not to add a little extra flavor by way of wood, so added a couple chunks of pecan to the coals. 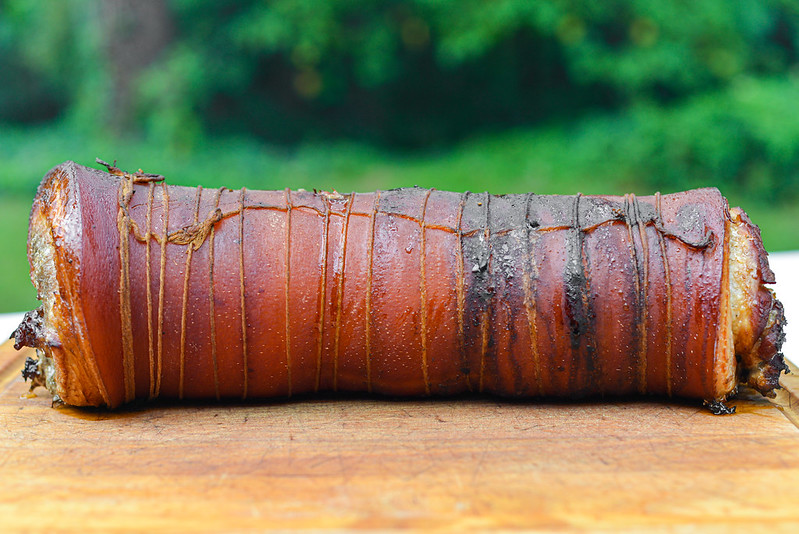 I smoked the pork until it reached 180°F in the center, which took about eight hours. When making straight up barbecue bellies, I usually go more north than that, to between 195-203°F, but I had cooked that porchetta last summer to 180°F and it tasted perfect, so just repeated what worked. When the pork was done in the smoker, the meat might have been juicy and tender, but the skin was flabby and not good eats yet, so crisping was in store. 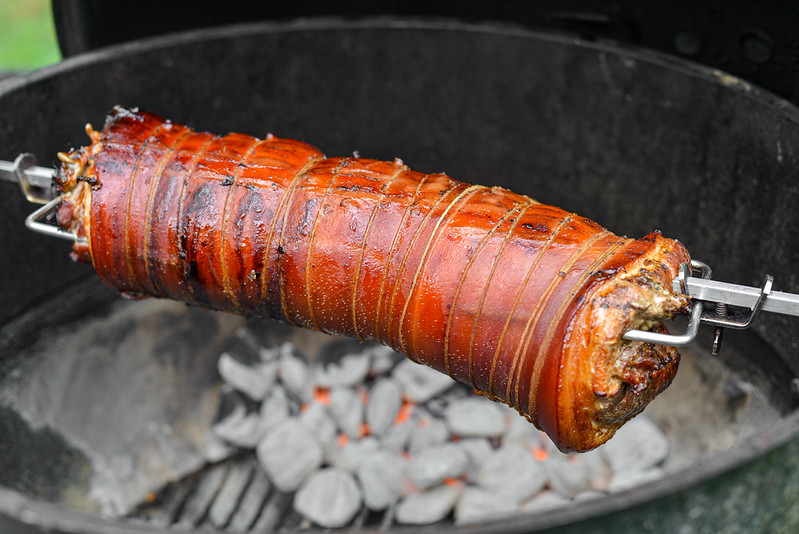 There's nothing like the rotisserie to handle this task—the slowly turning pork bastes in its own fat, cooking it evenly and with maximum flavor. Unlike with smoking, high heat is needed for this task, so I used a freshly lit batch of coals arranged in two equal piles on either side of the charcoal grate. Quickly the pork started to glisten and began to look mouthwatering. 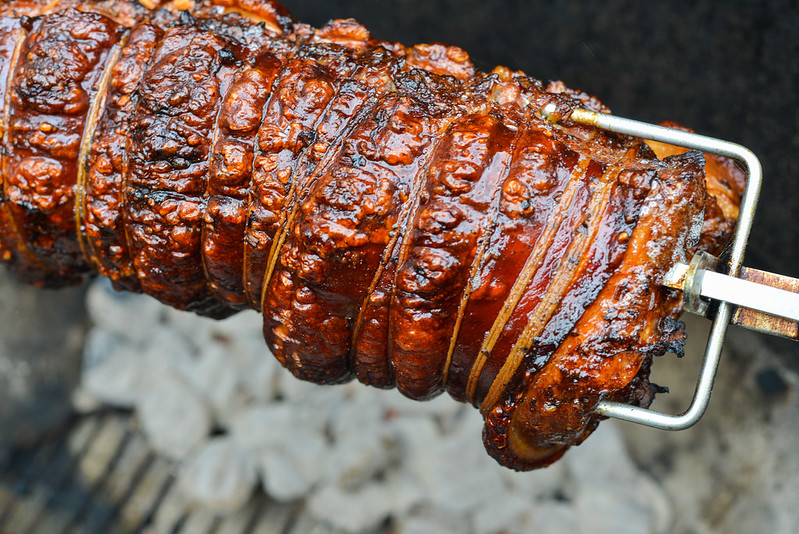 But given even more time, the skin blistered and became that extra crisp exterior that makes pork skin such a treat. It only took about 15 minutes for the skin to be sufficiently crisp all over, at which time I removed it from the rotisserie, removed the spit, and cut away the butcher twine before slicing and serving. 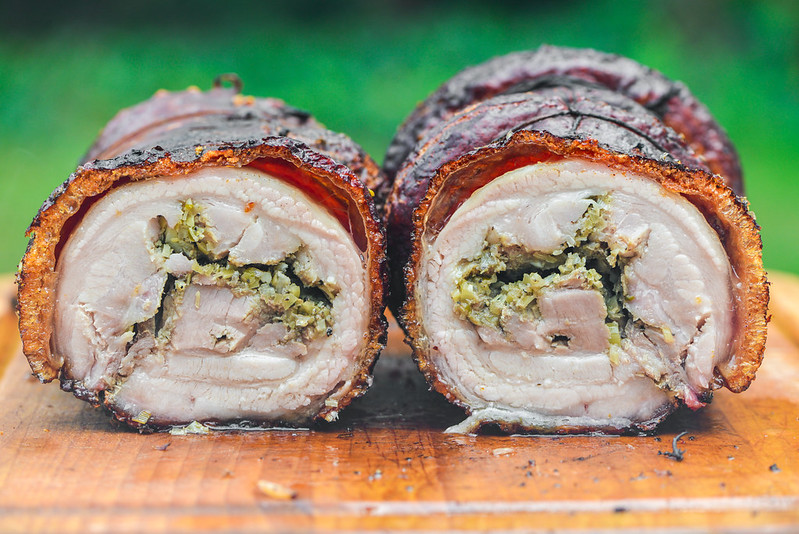 I was hoping for a smoked porchetta repeat and I got it. That combo of moist and soft meat with crackling skin, both having a faint smokiness, brought a wave of happiness to me once again. The seasonings, however, rendered almost a completely different beast. Where the herbs and pepper imparted a very pronounced sharpness to the porchetta, the lemongrass, garlic, and shallots resulted in a bit more of subdued flavor, but no less delicious. Being a fan of Asian flavors in general, I kind of preferred this one where the garlicky and lemony taste added a nice accent to the meat without overpowering it. It was definitely tastier than my first lechon liempo recipe, and another win in the pork belly category, which has become one of my favorite cuts to smoke ever since cracked its code.