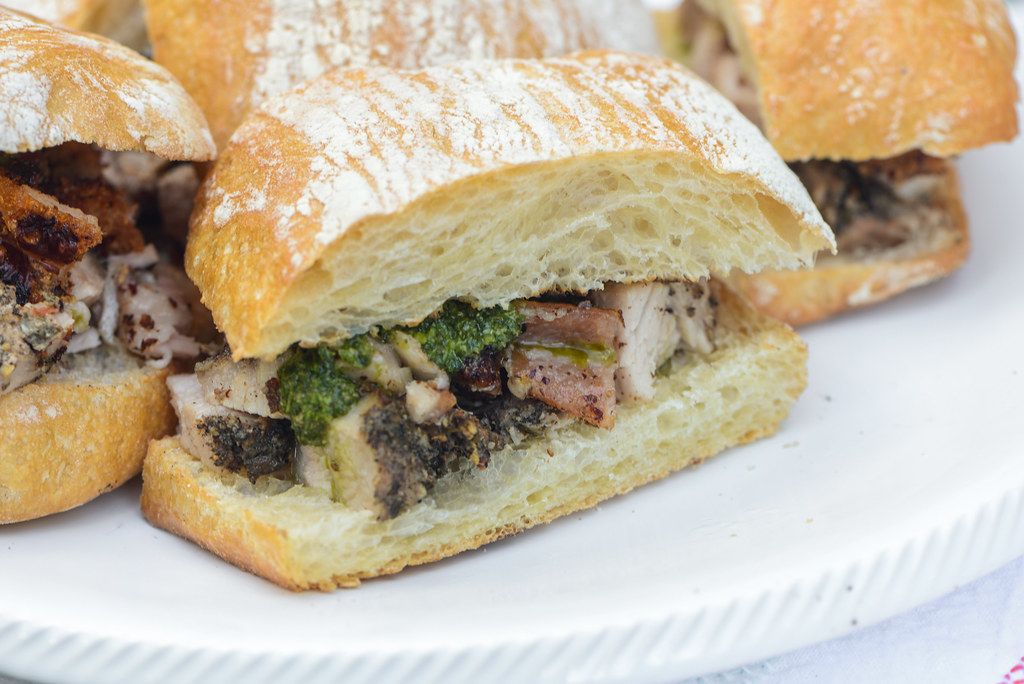 When I decided to make smoked porchetta, the impetus was really to have these very specific sandwiches. See, the week prior to that Meatwave I was in Vancouver for a conference and right next to the venue was a sandwich shop I had read about and always wanted to try—Meat & Bread. They're signature item is a sandwich that combines porchetta meat, crackling pork skin, and Italian salsa verde together on a toasty ciabatta roll. Of course, I had to get this while there, and while the sandwich looks and sounds seemingly simple, it was an incredible powerhouse of flavors and textures that left me craving more after finishing the last bite. So what was the best way to get more once 3000 miles away from the restaurant? Make it at home! 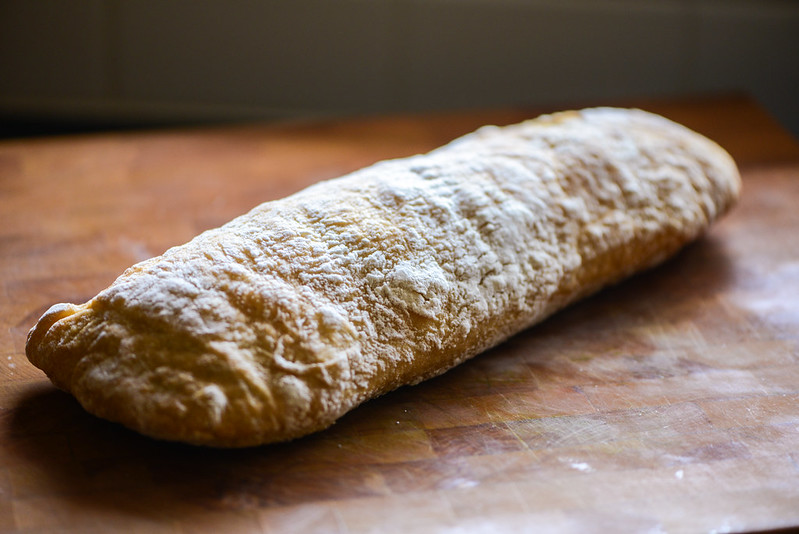 With a sandwich short on ingredients such as this one, each individual one counts even more. Luckily, a bakery by my house makes some pretty decent ciabatta, so it was easy to procure a couple loaves to make enough sandwiches to feed a crowd. 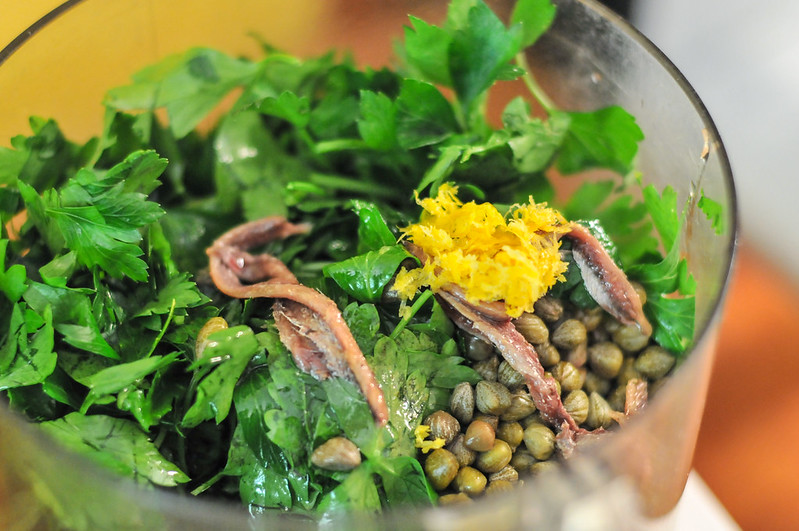 Italian salsa verde is something you'll definitely need to make fresh, but with the aid of a food processor, it's not much more than dumping all the ingredients in and pulsing. If you haven't had Italian salsa verde before, you're in for a treat as this sauce holds a ton of flavor that's primarily defined by it's most fresh components—parsley and lemon. The real magic though lays within the additions of anchovies and and capers, which create a great savoriness and pungent bite that introduces a lot of complexity. 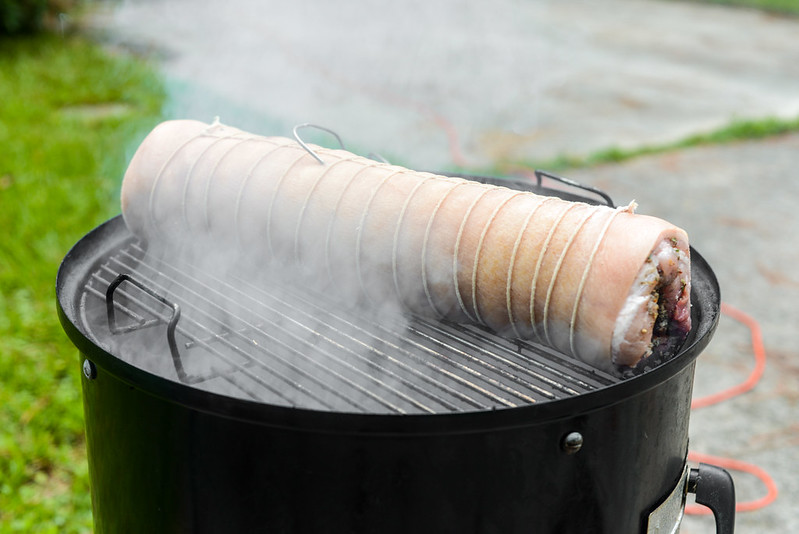 Since I wrote an entire post already on making the smoked porchetta, I won't go into much detail here. For a basic run down though, this porchetta was all skin-on pork belly that I seasoned with a herb and pepper mixture before tying closed and smoking until the meat registered 180°F in the center. I had bought a nine-pound monster piece of belly, but for a smaller crowd or just sandwiches, you can go smaller (although you'll probably want a lot for leftovers). 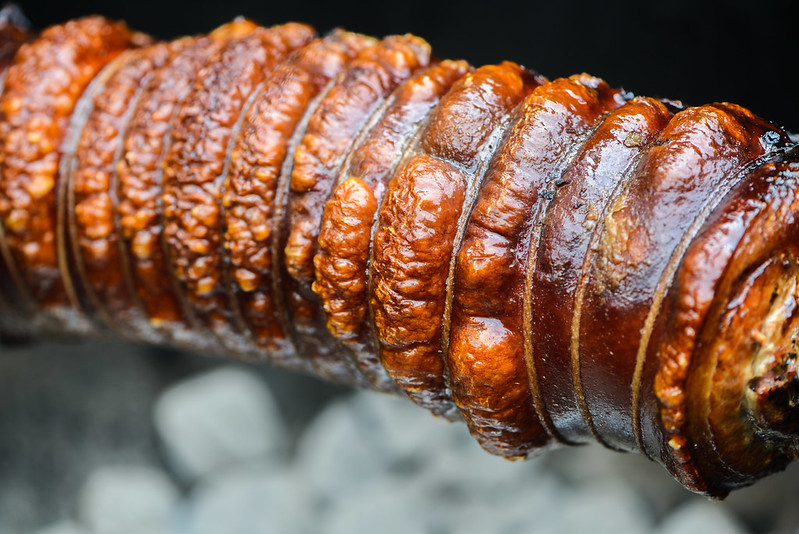 Once smoked, it was time to crisp up that skin, which is a crucial element in these sandwiches. So to do that efficiently and effectively, I employed my rotisserie over a very hot fire, which turn that kind of rubbery skin into ultra crisp crackling in about ten minutes. 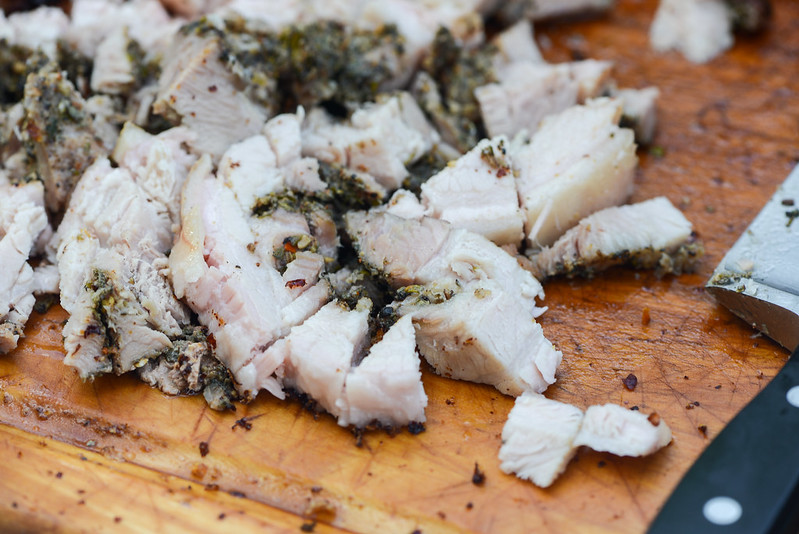 Once all complete, to make the sandwiches I started by divorcing the skin and meat of the porchetta and dicing each one separately. 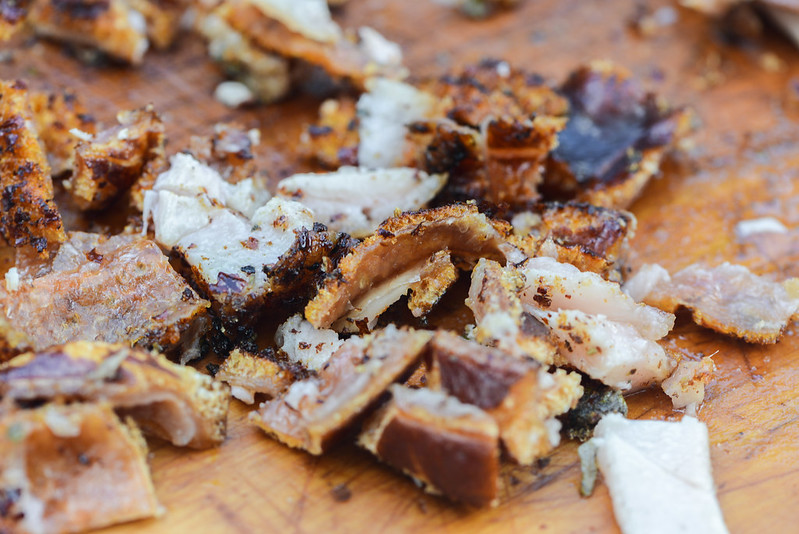 Now that belly meat was juicy, tender, and intensely seasoned, but man, it still couldn't hold a candle to the crisp, smoky skin, which I continually kept popping pieces of while chopping it up. 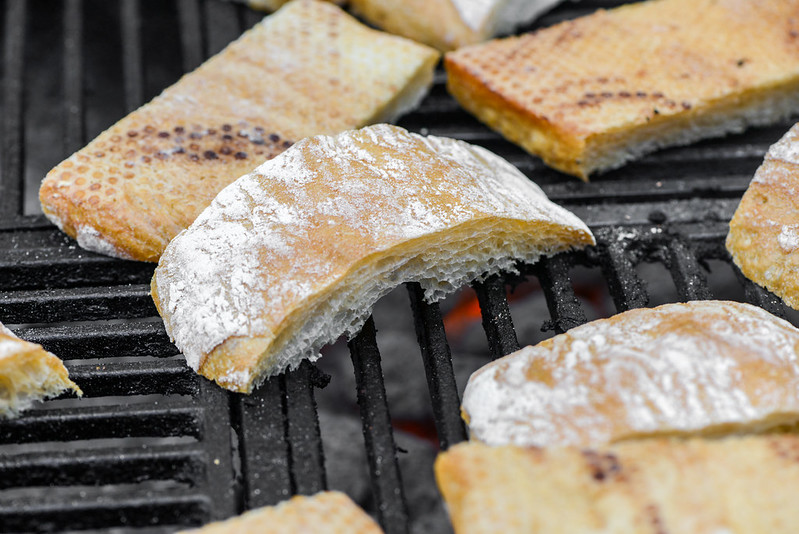 Next I brushed the ciabatta lightly with olive oil and toasted it over the fire. I had sliced the bread into a lot of small sections for sampling size, but a normal large sized ciabatta will probably make three to four regular sized sandwiches. I also used the grill to toast them because I already had it going, but on subsequent days, when making these sandwiches as leftovers, the toaster oven did the job for me. 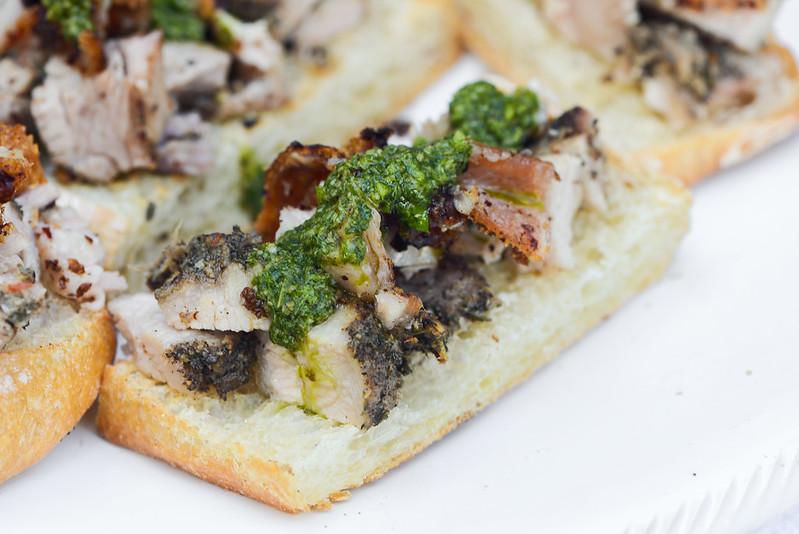 Then, for assembly, I first laid down a layer of the chopped porchetta meat, followed by bits of the crispy skin, and finally topping with the salsa verde. 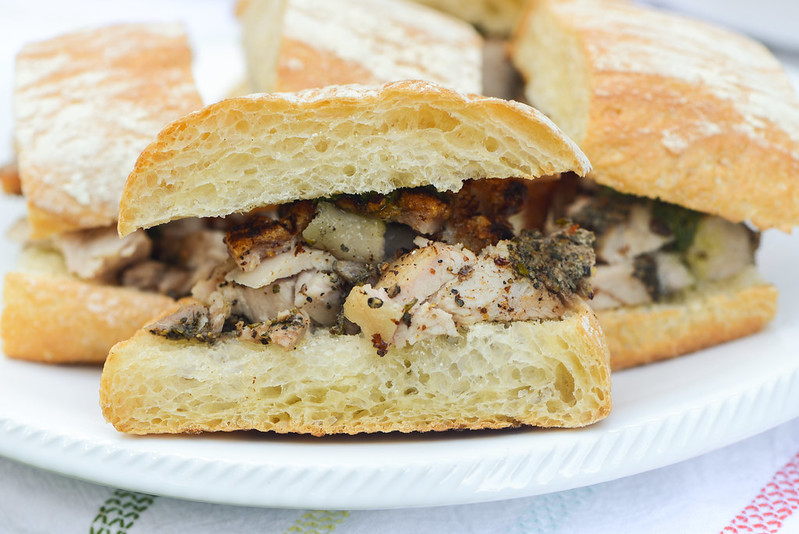 I would have been elated to say that these matched those sandwiches from Meat & Bread, but the reality was, I think they were even better. There were couple things that really made this sandwich stand out for me when compared to the inspiration—my porchetta was more heavily seasoned with a stronger herbal and spicy character that I really liked, and the fact that it was smoked added an additional flavor component that elevated it even further. This here was sandwich perfection. Each bite was awash in immense flavor with juicy, tender meat with textural contrasts from the crisp bread and crackling skin, plus the tart and fresh salsa creating a balance to the heaviness. I seriously ate these for days after first making them and never tired of them. I did, however, get my cholesterol checked about a week later and it was off the charts, so take that for what it's worth, although I still stand by each sandwich being totally worth it. 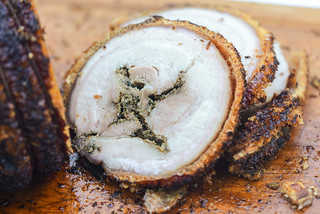 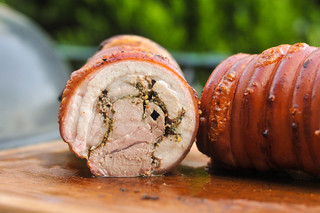