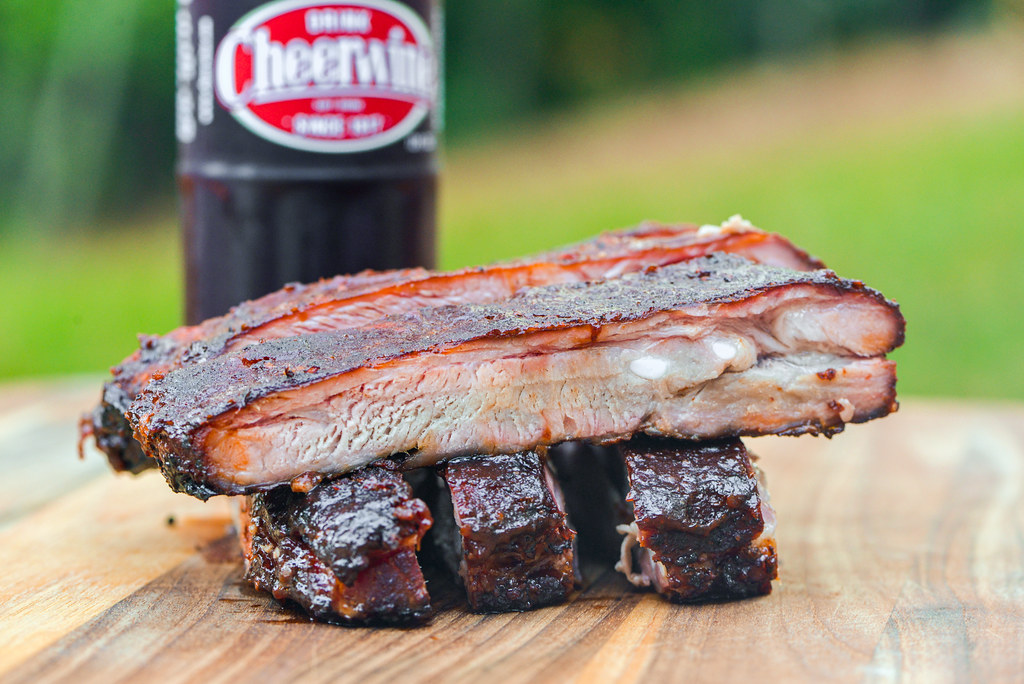 Before moving to North Carolina I only had a faint knowledge of Cheerwine, and certainly never had tasted this cherry flavored soda. Once I relocated down here though, I found this stuff is everywhere and inevitably had to try my new locale's hometown beverage. I'm not a huge candy cherry flavored fan, but I did quite like the fruity and sugary sweet flavor of Cheerwine. Since I did not grow up on it though, I don't think it will ever become my soda of choice—I'm still a mainly Coke and Dr. Pepper man, but maybe few times a year I end up with bottle of Cheerwine and am reminded, "Hey, I like this." Now that it appears that I'm going to be a North Carolinian for the long haul, I should probably let Cheerwine into my life more, so when I had a hankering to smoke a rack of ribs recently, I decided to reach for the Cheerwine as the primary flavoring agent and things turned out pretty well. 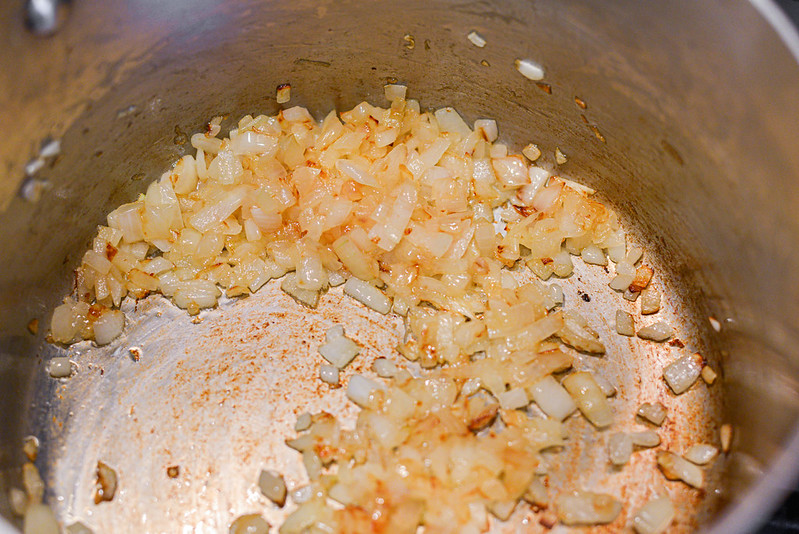 Since Cheerwine is a liquid, it was destined to be the base of the sauce. This isn't my first rodeo with soda based sauces, I've used Coke, Dr. Pepper, and Sprite in barbecue sauce recipes in the past and they all worked out well. That really shouldn't be much of a surprise since the foundation of many barbecue sauces are sweet and acidic, which is exactly what soda is, so the two make a good pair. Having done a cherry barbecue sauce previously, I started with that recipe as a guide, adjusting seasonings and amounts to account for what the Cheerwine would bring to the party. As with most of my sauce recipes, I started this one out by sautéing onions, which adds a sweet onion flavor that I much prefer to the harsher onion powder. 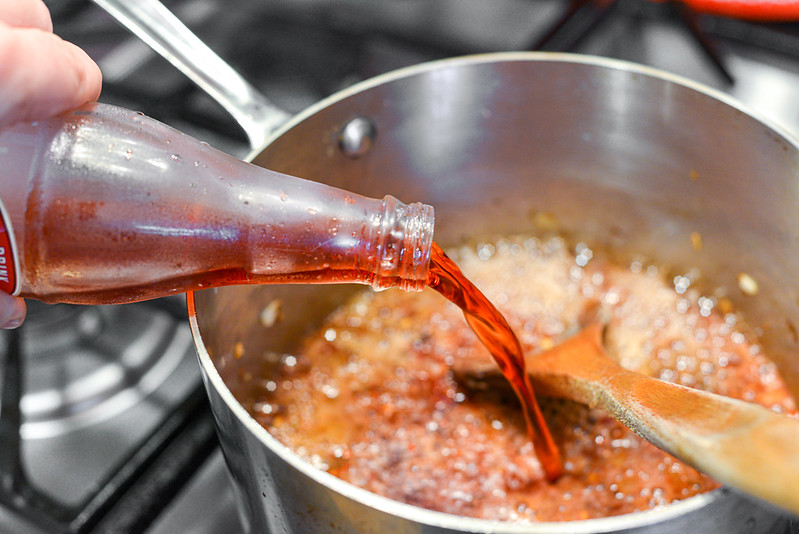 I used an entire 12 ounce bottle of Cheerwine in this, opting for the cane sugar version mainly because I wanted the bottle to make a better photo in the end. Standard ketchup was the other big player here, then to pair up with the cherry flavor and give this sauce some uniqueness, I utilized chipotle powder for some smokiness, ground white pepper for a sharpness, and crushed red pepper for a heat to contrast with the mainly sugary foundation. Because the soda made for a thinner sauce, I had to let this one simmer a bit longer than normal to reach a nice thickness for slathering on ribs. 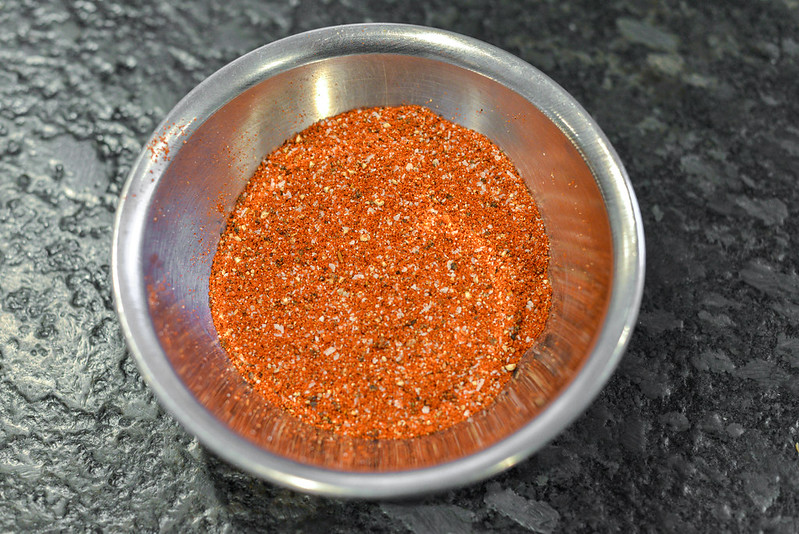 Once the sauce was done, I gave it a taste and it had a great fruity cherry character, but was a bit spicer than I had originally intended. That led me to start the rub off with a heavy brown sugar base which would create the right sweet and spicy balance in the final dish, plus add some molasses flavor, which the sauce did not have. I didn't go too crazy with the seasonings in this rub, just adding in the standard players in amounts that kept the spice mixture tasting a little more subdued to feature the Cheerwine flavor of the sauce the most on the ribs. 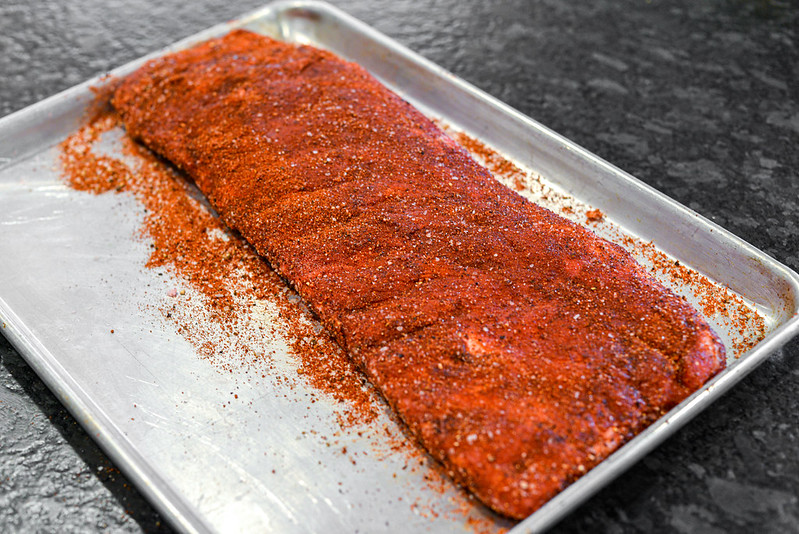 Since the rub wasn't over the top in any way, I had no qualms with very generously seasoning my ribs with it—although this is really the norm for me. I bought a rack of spares already trimmed to a St. Louis cut, so all I had to do to prep the meat before seasoning was to peel off the membrane from the back and trim off any excess pieces of fat. 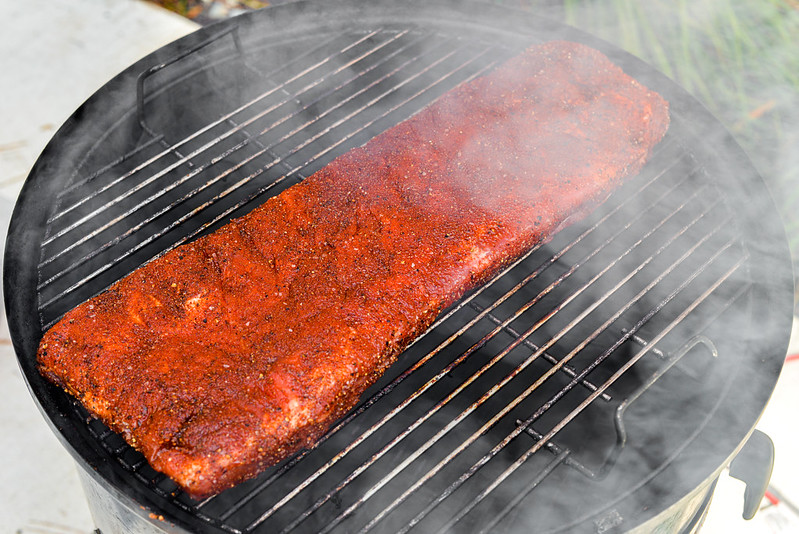 For smoking, I needed to consider what would taste best with that Cheerwine flavor. The soda made for a tasty sauce, but not a super bold one, so I didn't want to overload the meat with heavy smokiness. This led me to choose a light smoking wood and not go overboard with the amount of chunks used—I appropriately picked just a couple pieces of cherry wood. 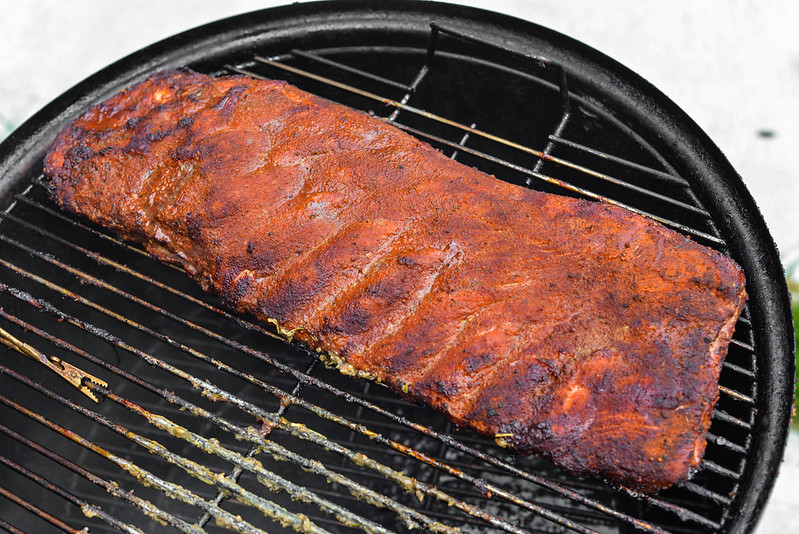 I knew I wanted the final rack to have a nice cherry red color to it, so I kept an eye on when the ribs started to turn a shade of red I was happy with. This took about three hours to reach, and once at that point, I began spraying the ribs with apple juice about every 45 minutes or so. This method helps keeps the exterior from darkening too much further since it adds moisture that has to evaporate before browning begins again. 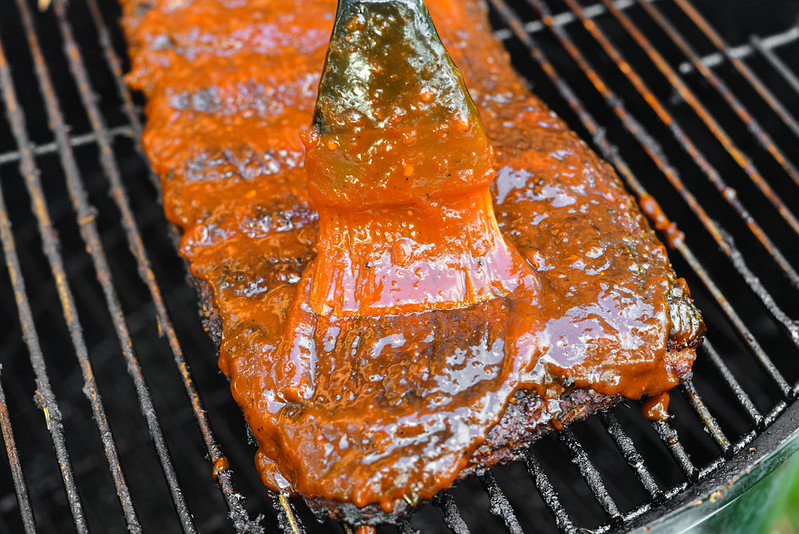 I tested doneness on the ribs by lifting one end and judging how they bend—you don't want much stiffness, but also not so tender that they fall apart when lifted. Once the ribs felt they were around 30 minutes from being done, I applied the sauce. This is what I like to do to give the sauce some time to bake down if I don't have a hotter fire going. If I do happen to have a grill lit when cooking ribs, I usually opt to apply the sauce right at the end of the cook and then let it bake down and caramelize quickly over a hotter fire. 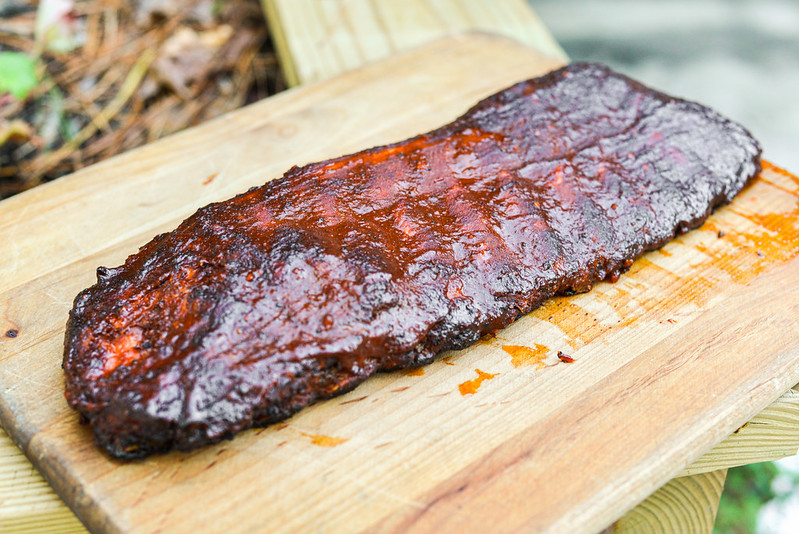 The final rack was sporting some good looks with nice maroon hue that felt fitting for the Cheerwine that made up the majority of the sauce. I was pleased with appearance, so now it was time to see how they tasted. 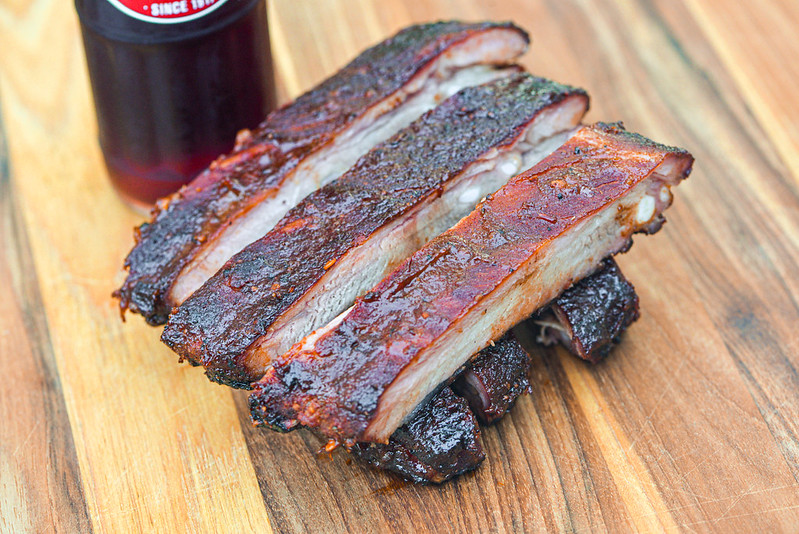 For me, everything pretty much came together as I was hoping for in the end. The sweet cherry flavor of Cheerwine may not have been super distinguishable once combined in the sauce and paired with a rub and smoked meat, but the overall profile of these ribs were fruitier than your average rack, which is where the soda did its work. The sauce lent a nice kick of heat too that wasn't as prominent after being matched with the sugary rub—I felt like it was hitting a very nice sweet and spicy balance. I think what really sealed the overall experience was enjoying these along with a bottle of Cheerwine, which might have influenced my overall perception, but that was kind of the point to begin with—I wanted to get my adopted home state's beverage of choice more into my life more, and these ribs certainly did that in many ways. 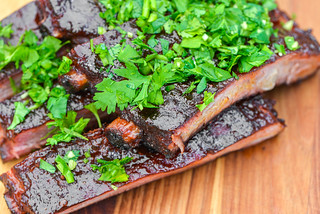 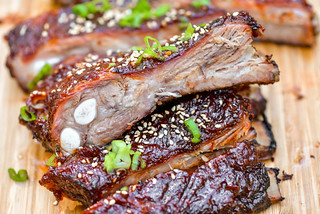