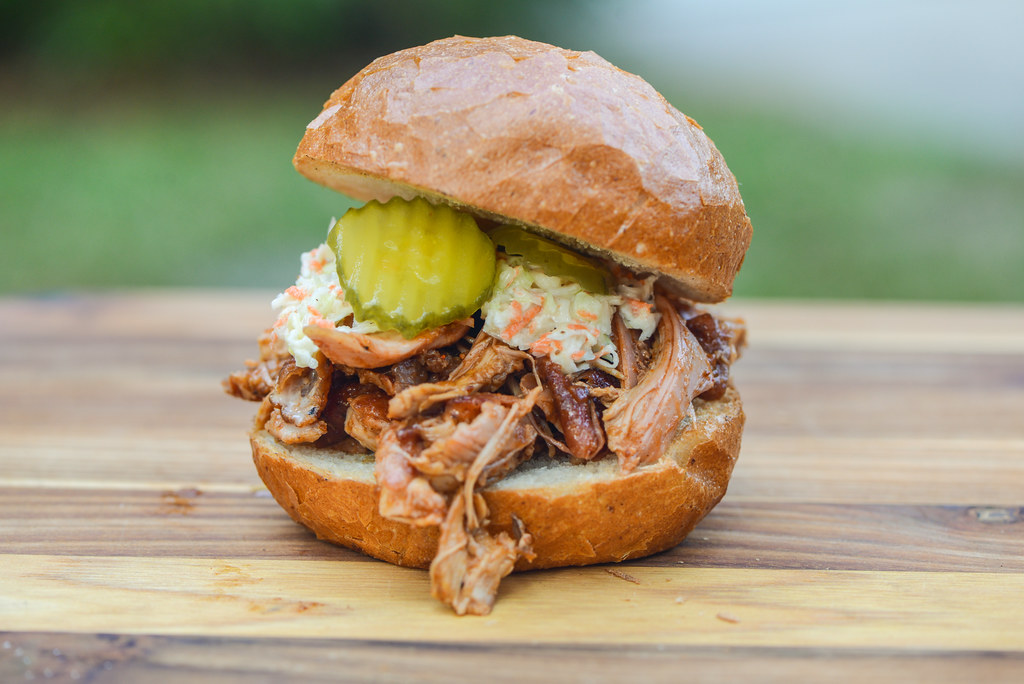 Happy Thanksgiving Meatwavers! If you're anything like me, you're probably busy in the kitchen right now prepping everything for a gigantic and delicious feast this evening. Then you get to enjoy that meal again the next day, and the next, and the next thanks to what feels like endless leftovers. Seeing as I'm not much of a leftovers guy, the repetitiveness of eating the same thing over and over becomes unappetizing, so I'm always looking at ways to reuse that holiday spread in creative ways that makes it feel new again and I had what I think is a pretty good idea this year—pulled barbecue turkey sandwiches. 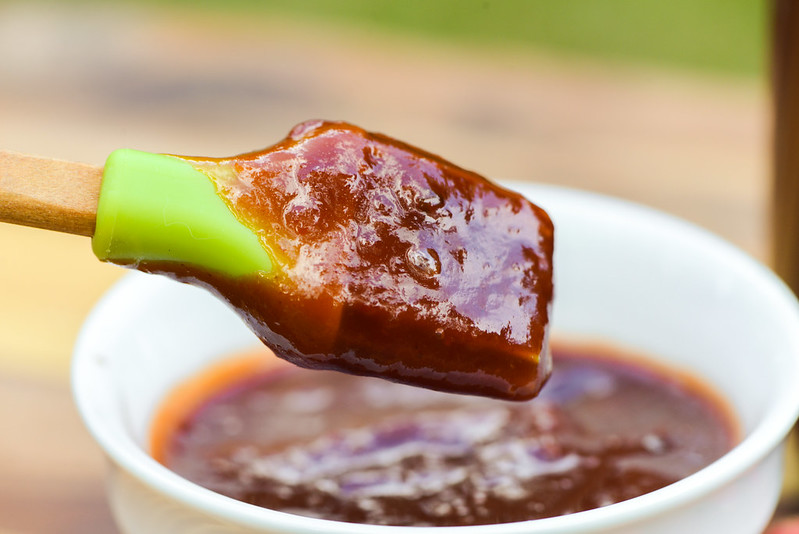 This concept got bonus points because it gave me the perfect use the cranberry barbecue sauce that was born from inspiration around this fall holiday. My recipe makes the cranberry sauce from scratch, but if you have leftover cranberry sauce from the big meal, it can serve as the base and cut down the ingredients and work needed to put together this sweet, tart, and fruity barbecue sauce. 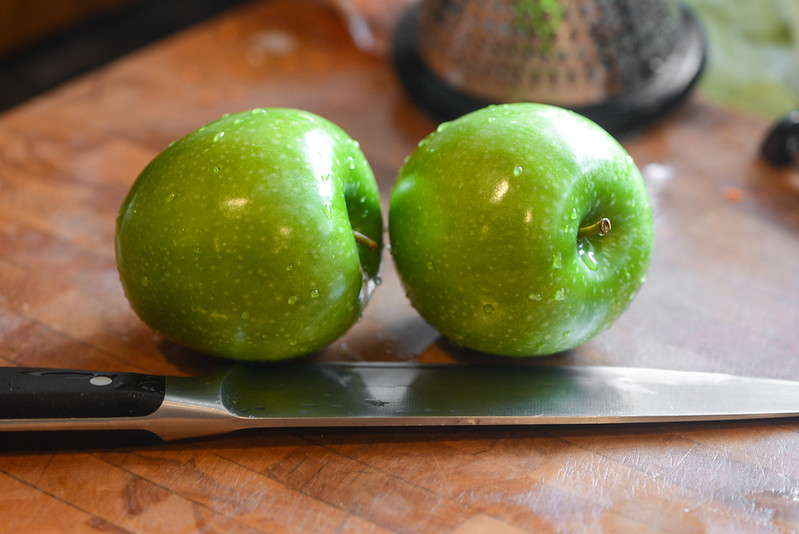 I reckon you may also have some types of toppings to use for these sandwiches as part of your leftovers, and by all means, use them, but I thought this would be a perfect use for a tangy apple coleslaw recipe I developed a few years back. It starts with tart Granny Smith apples, whose flesh is sturdy enough to be grated and not turn to mush when mixed with the other ingredients and dressing. 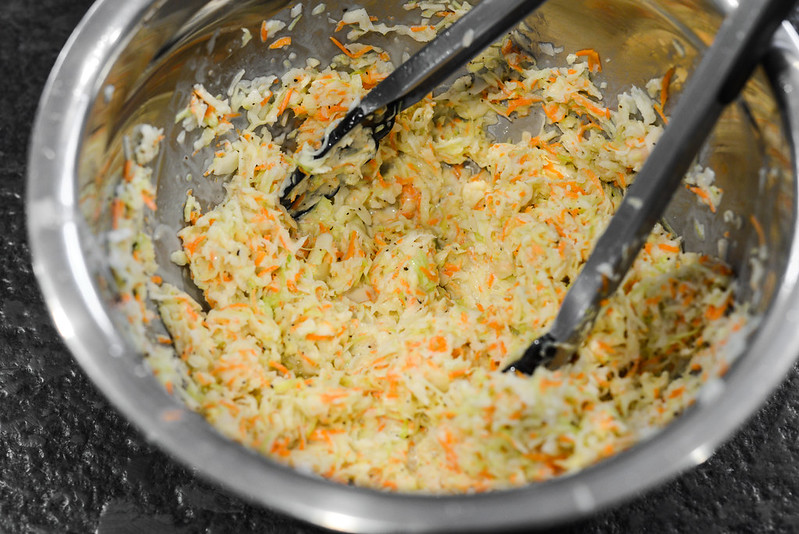 The rest of the slaw mix was just your standard green cabbage and carrot—which I drew moisture out of to get them crisp-tender by tossing them with plenty of salt and sugar, then rinsing and drying. The dressing is where this slaw gets it tangy character by using sour cream instead of mayonnaise as the primary base, and also a little extra vinegar for added tartness. 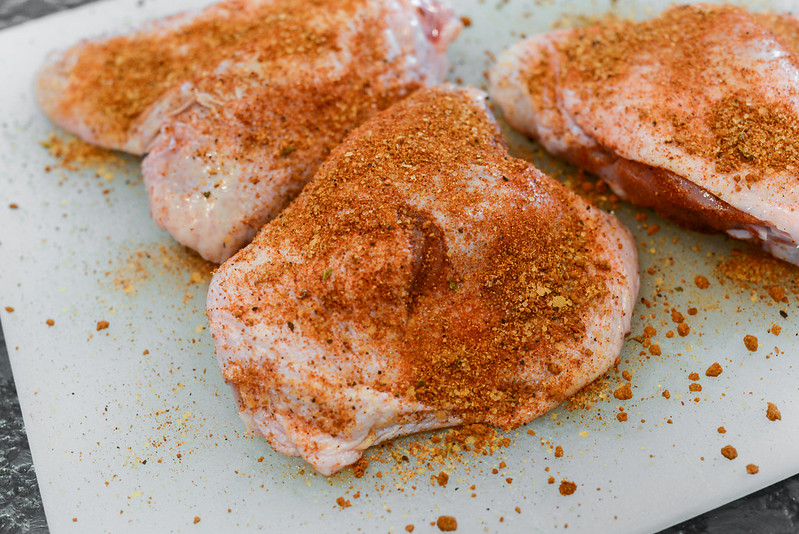 As I mentioned in the beginning, these sandwiches really came from thinking of a use for leftover turkey, but since I made the recipe prior to Thanksgiving, I didn't have any cooked turkey on hand. So to start from scratch, I opted for turkey thighs which are inexpensive, juicy, and flavorful—the perfect cut to get the job done. To prep them, I just coated the thighs in my favorite barbecue and headed for the grill. 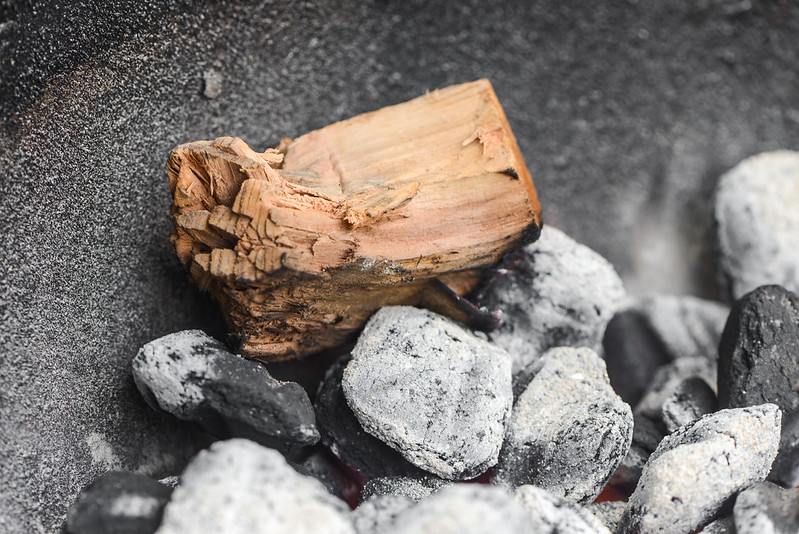 Since there isn't a ton of connective tissue and fat to break down in turkey like in a pork shoulder or brisket, the advantages of slow smoking here is minimal. To save time, I opted to go for a medium hot fire, achieving a heat around 350°F by using just half a chimney of lit charcoal. Before putting the thighs on the grill, I added a piece of apple wood to the coals get a smoky flavor embedded into the meat. 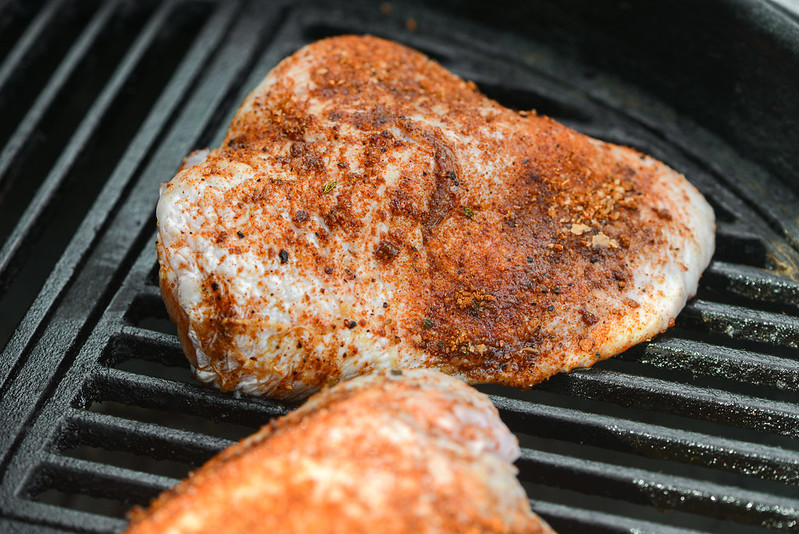 I then placed the thighs on the cool side of a two zone fire, covered, and situated the top vent over the thighs. This setup helps the smoke be drawn over the meat before exiting the grill. 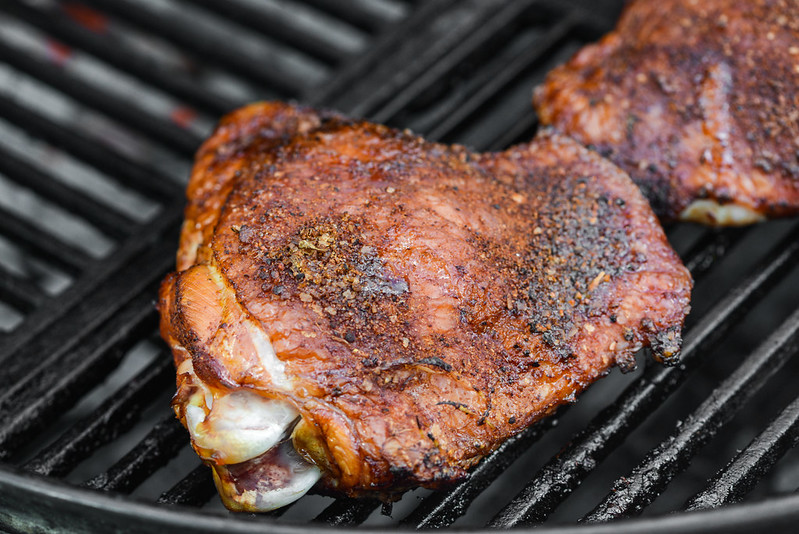 I was shooting for a final temp between 165-170°F on the thighs, which took just shy of one hour to reach. One of the nice things about this dark meat is that's somewhat forgiving, so I wasn't too worried if I ended a bit north of my target for whatever reason. 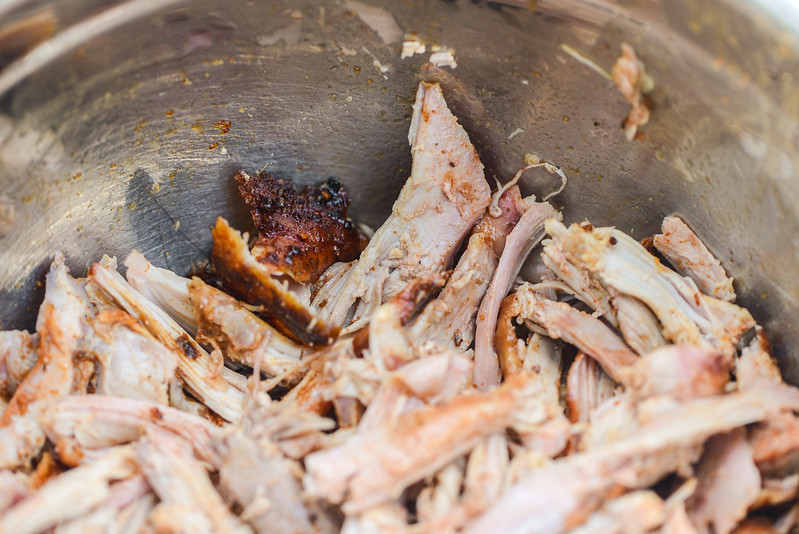 After resting for ten minutes until cool enough to handle, I began pulling the meat from the bone. My initial process was going to include eating the skins as I pulled the meat as a special pitmaster snack, but those skins were so damn tasty and crunchy, I couldn't keep them to myself. So instead I chopped them up and added them into the mix, even though I knew they wouldn't retain their crunch, but would add a lot of great barbecue flavor. 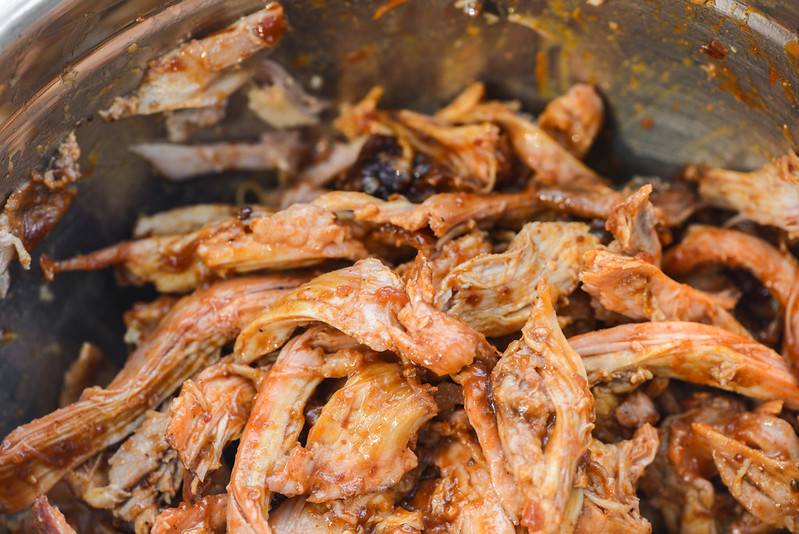 I then sauced the meat, starting with one application of sauce and then letting the meat sit for a couple of minutes before applying more. I find the meat absorbs a certain amount of the sauce and I want to see how much of that occurs before fully committing on the final amount needed. I'm not a barbecue-drenched-in-sauce type of guy, so I went for an overall light coating, but if that's your thing, then go ahead and go crazy what that excellent cranberry sauce. 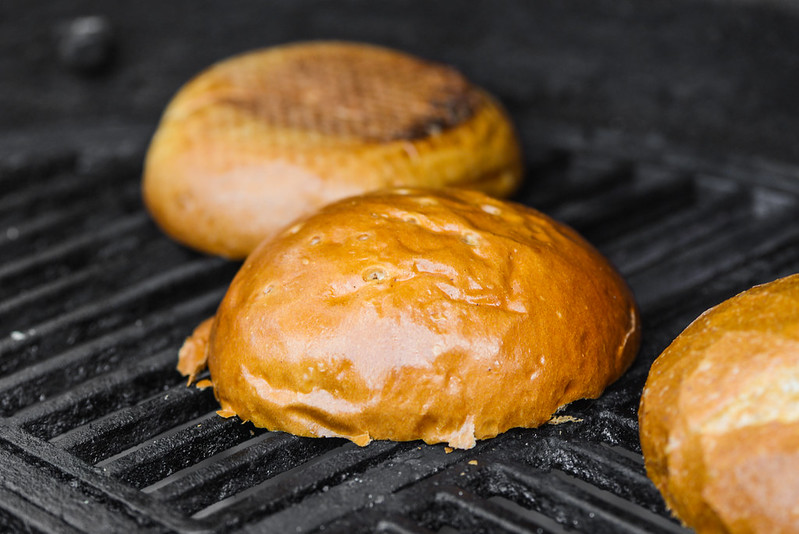 I couldn't decide what type of roll I wanted, so tried out brioche and kaisers, toasting both before assembling the sandwiches. My favorite was the sweet and soft brioche, which added some extra sugar to the more tart slaw and barbecue sauce, but the wife preferred the kaiser, so again, your call, but you can't lose either way. 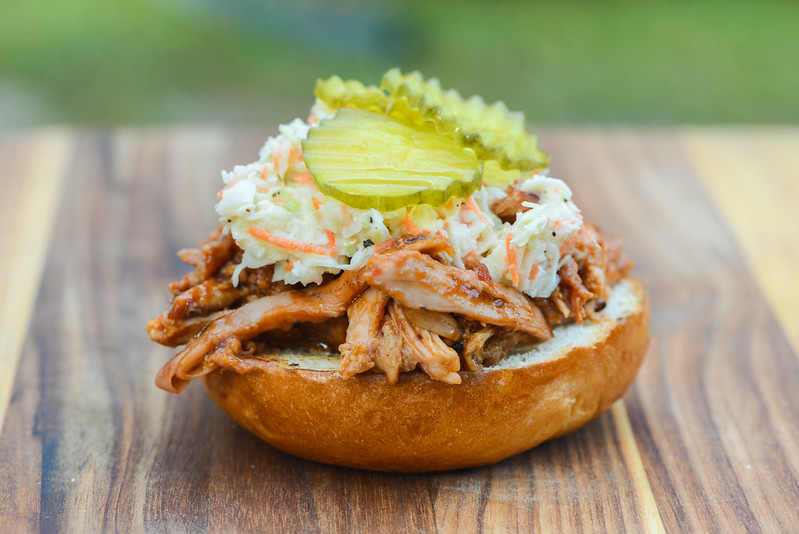 To assemble the sandwiches, I topped each bun with a healthy portion of the pulled and sauced turkey followed by the slaw and a few slices of dill pickles. Those pickles were a last second addition I grabbed when I went to the fridge to retrieve the slaw and they ended up being a great touch. 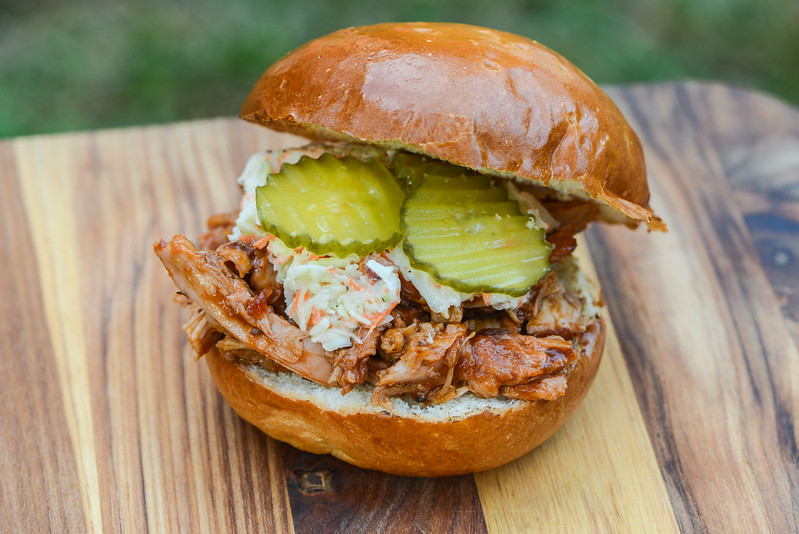 These sandwiches had so much going. The turkey itself was juicy with a light smokiness that melded with the sugars and fruit in the sauce. The slaw brought a nice crunch to party, along with its unique tang which was built upon even more with the sourness of the pickles. I'll put another plug in for brioche rolls, which enhanced the sweet and savory qualities of the sandwich on the whole. Delicious they were, but most importantly, they only faintly resembled a Thanksgiving meal, making them a way to use all those leftover in a manner that doesn't feel like you're settling for the same meal over again.