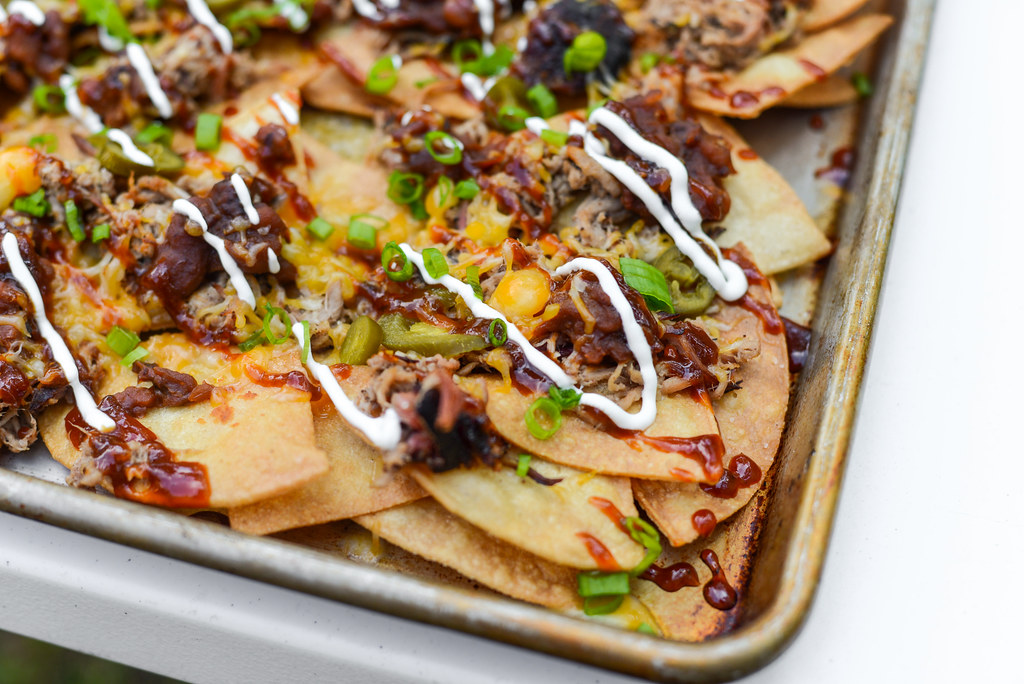 I've admitted in the past that I'm notoriously horrible at eating leftovers—I'll save them with best intentions, but the reality is leftovers are unappealing to me and they usually meet a fate whose wastefulness is a point of shame. There are some exceptions to my leftover aversion though, with pulled pork being one of those outliers. I love leftover pulled pork so much that I tend to smoke twice as many pork butts as I need at any given time so I can divvy up the second one into small servings and freeze for later use. One reason pulled pork breaks from leftover norms is due to its versatility—the options beyond a bun and slaw are almost limitless. While I'm sure you need no proof to deem that statement true, I present to you these pulled pork nachos as an exhibit anyways. 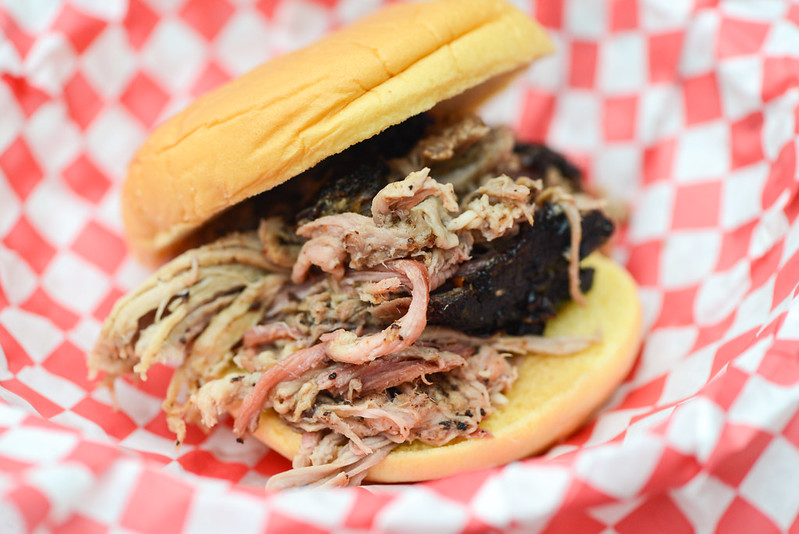 I actually haven't smoked pork butts in a couple years after falling victim to less-than-desirable results in this meat that used to be a shining star in my repertoire. It actually wasn't even supposed to be on the menu for my big Carne-val celebration this past summer, but when I came up short on a search for whole packer briskets, I defaulted to pork shoulders as my inexpensive choice to feed a large crowd. Luckily this time around everything smoked up properly and I had excellent juicy, tender, and smoky pulled pork on my hands, the leftovers of which I vacuum sealed and froze for later use. 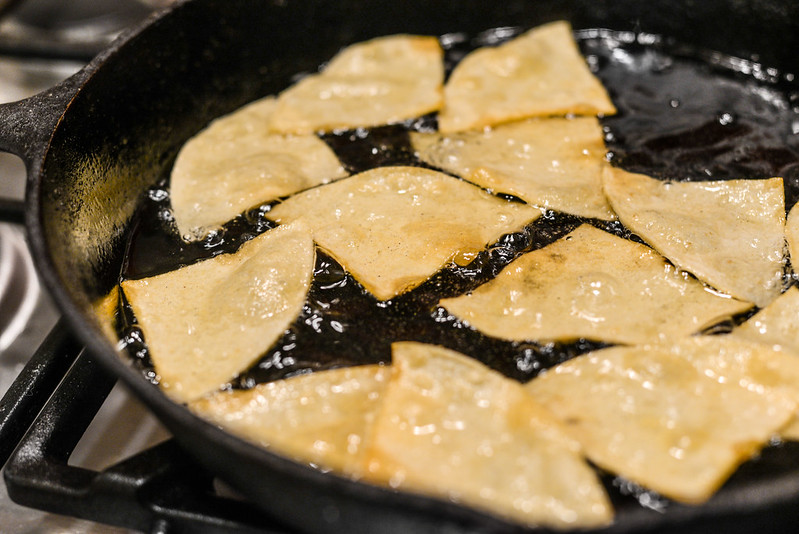 It was only a month later that I had to idea to make these pulled pork nachos for another Meatwave, and while the meat would come from a past cook, most of the rest of the ingredients I whipped up fresh, starting with the tortilla chips. 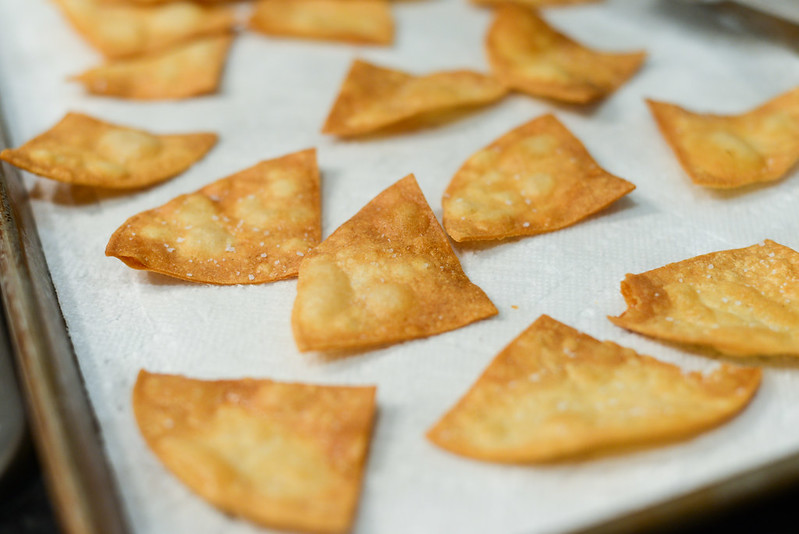 I have yet to find the perfect pre-made chip for nachos—bagged chips tend to always have some flaw whether it be size, over seasoning, thickness, etc. It's also hard to beat a freshly cooked chip, so the minimal time it takes to fry up a batch of tortillas into crispy chips is well worth the effort. 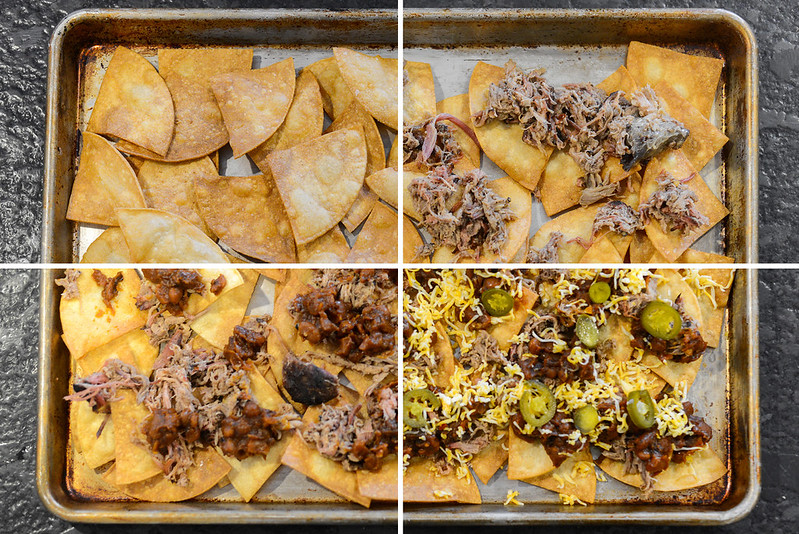 After frying my way through an entire bag of tortillas, I moved onto nacho assembly. I was going for the party-style nacho platter here that doesn't skimp on scope—both in toppings and scale. I spread out a single layer of chips over a half sheet pan and proceeded to top them generously with pulled pork, barbecue beans, cheese (Colby jack here, but would have preferred Longhorn cheddar only), and pickled jalapeños. 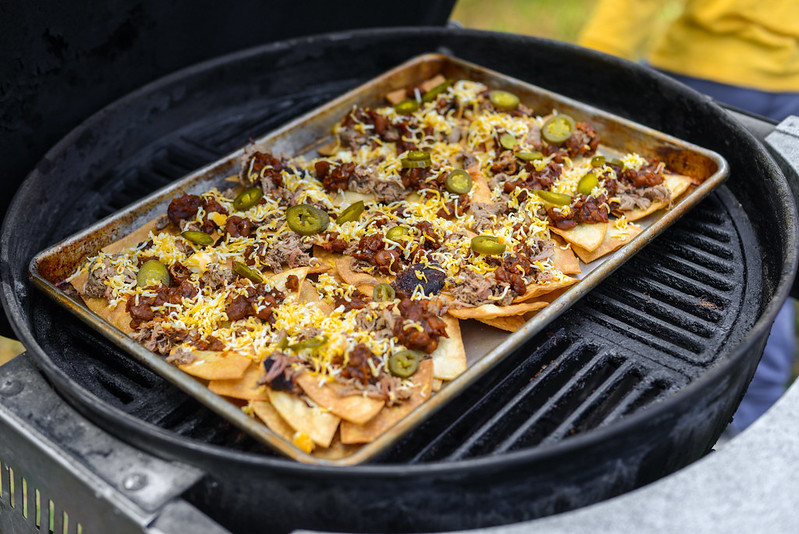 Since this was made during the Meatwave, I utilized the already lit charcoal to melt the cheese and warm the toppings. If the grill had not already been going, I would have thrown the tray into a 425°F oven for the very short amount of time they need to cook—there's no advantage or need to light charcoal to make these nachos. 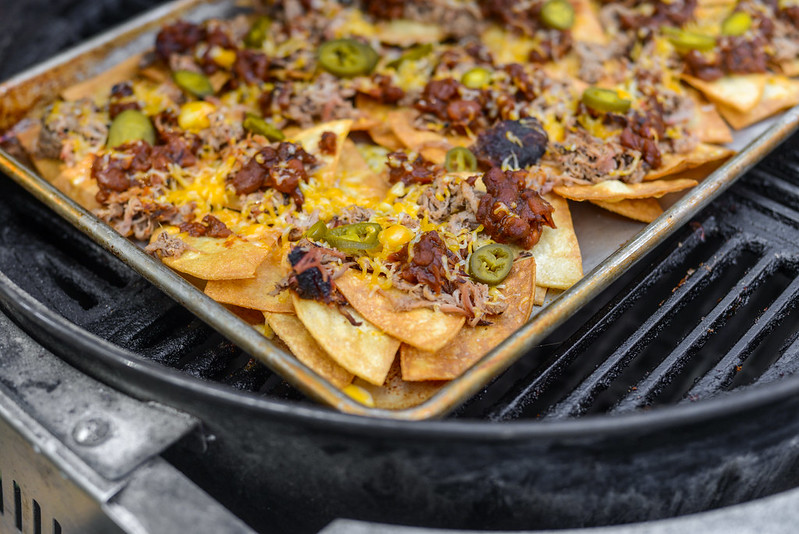 It only took a few minutes to fully melt the cheese, at which point I removed the tray from the grill and finished up the toppings. This involved a squeeze of barbecue sauce across the entire tray first, followed by a squeeze of sour cream, and finally a sprinkling of green onions. 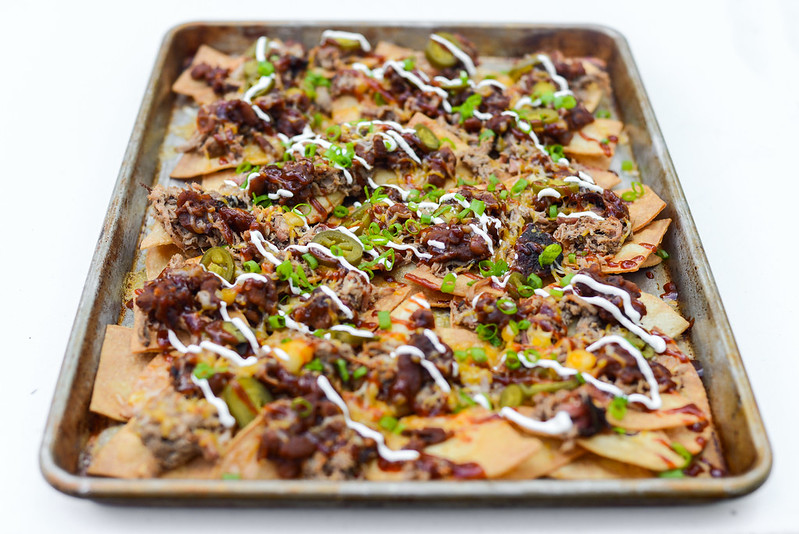 And with that, I had one amazing looking tray of nachos. Taste matched looks too with a hearty nacho that could serve as either appetizer or meal. The pulled pork—which didn't taste like leftovers at all in this context—added a lot of heft, especially when paired with the also filling barbecue beans. The cheese melded well with two while the pickled jalapeños created a contrasting spicy, tangy heat that also balanced out the fat. The barbecue sauce was an apt addition, while the sour cream made it feel more nacho-like and the green onions imparted the freshness that would otherwise be missing. Now if only I could use all my leftovers is such a manner, I would certainly be a lot less wasteful and a lot more eager to eat them.