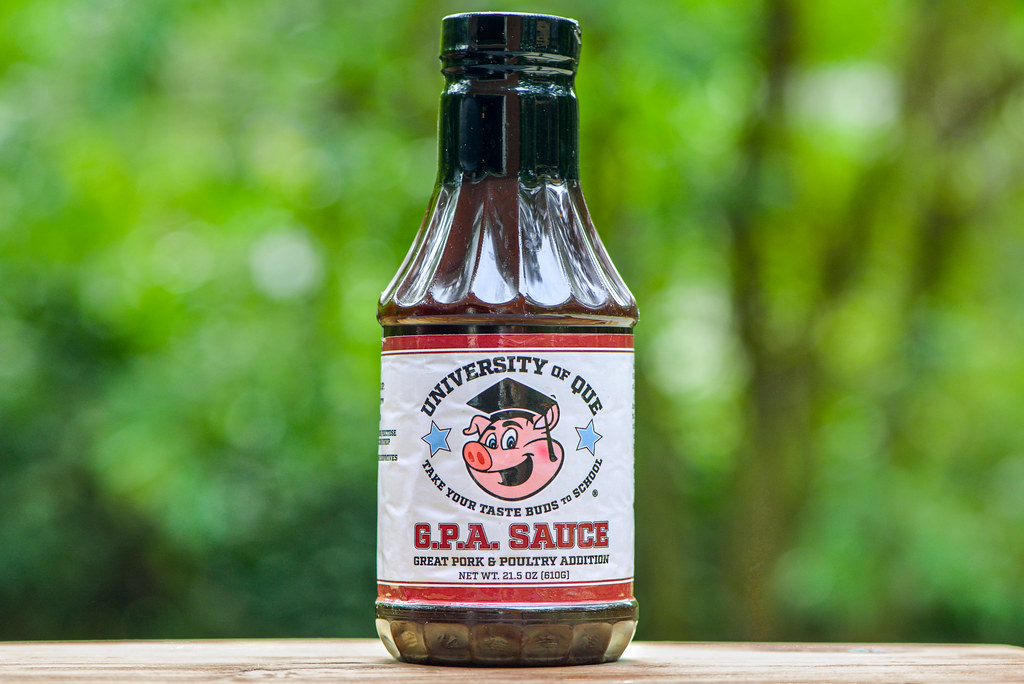 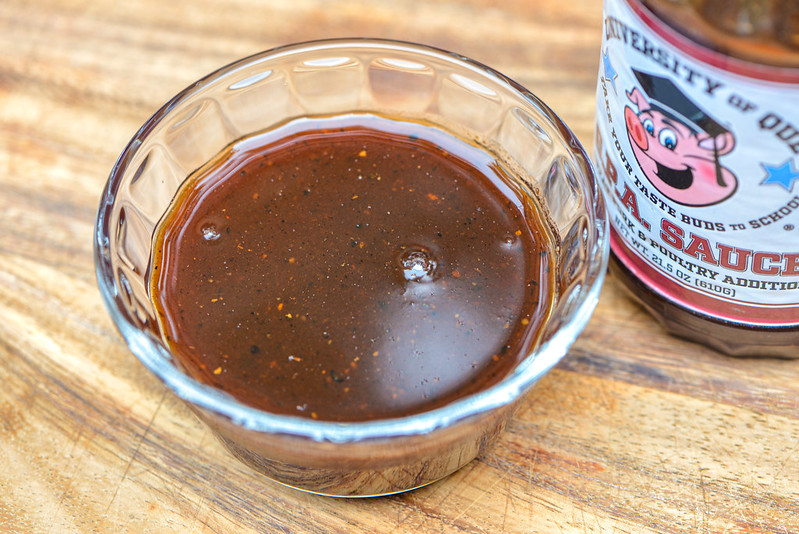 I was clued into this G.P.A. Sauce by a reader who gave me a nudge to try it out. After placing an order for it, I did some background research and found the University of Que brand is aptly named since it was founded by the husband and wife team of Kevin and Tammy Jacques who both hold PhDs in College and University Leadership from Colorado State University and currently work at the University of North Alabama. Kevin picked up the cooking bug at an early age , but it was only after getting married that he began to dabble in the art of smoked meats. This eventually led him to start competing under the University of Que name with Tammy by his side. Between success in competition, winning multiple awards for their G.P.A. sauce, and an appearance on the Travel Channel's American Grilled, University of Que has gained some notoriety and their products can currently be found in a number of stores throughout the central U.S. as well as online.

A very unique aroma with a strong tang and super savory elements fills the nose upon first whiff of this sauce. The primary savoriness is no doubt derived from Worcestershire, but it's more prominent than in your average sauce and also has a little tamarind undertone. Behind the vinegar and Worcestershire sits a fruity tomato that has the sweet presence of ketchup and molasses, but with the sugars being a bit drowned out due to the hefty tang. A deeper noseful does bring the sweetness a little more to the forefront and there's a vanilla tinge to it, which only adds to the uniqueness of the aroma. That more forceful whiff also imparts a tingle in the nostrils which can be mostly attributed to vinegar, but there's also a hint of pepper at work too.

While this sauce has a dark maroon hue, its semi-transparency makes it easy to see a lot of medium sized black and white spice bits, along with a ton of small orange ones. The sauce's medium-thin thickness and smooth, very syrupy consistency has it falling from a suspended spoon in fast and steady pour that takes only a few seconds until almost all of the sauce has released and, after a few slower drips, leaves a thin coating left clinging to the silverware.

The first taste of this sauce brings a strong sugary start that has an immediate molasses depth to it. As the sauce settle in on the tongue, a bright and fruity tomato enters the party, adding a ketchup-y taste that then begins to meld with the savory complexity of Worcestershire and tamarind. Next the vinegar enters with a mild tartness that then ramps up as faint tastes of garlic and vanilla add even more depth to an already complex sauce. As the sauce exits the mouth, there's an initial bump in sweetness that's quickly followed by an increased vinegar tang and mellow sharp black pepper heat that completes the barbecue profile in the aftertaste, which still holds the flavors of all the ingredients that came before. 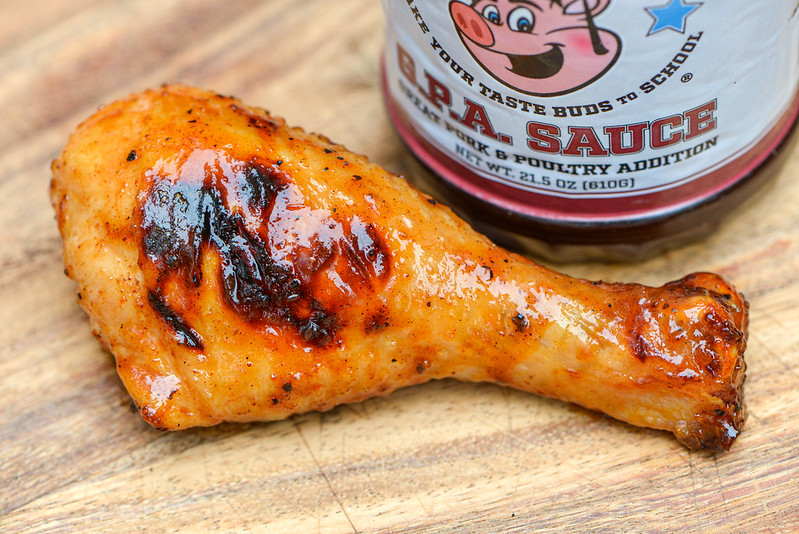 This sauce brushed onto the chicken in a thin and even coating that slid off the meat in places. The sauce layer and color was very light at first, but with the sauce baking down well, only one extra coating was needed to bring it up to par with a baseline barbecue sauce. When moved from indirect to direct heat, all the sauce stayed put and there was good caramelization without any burning. The light visual look of the sauce was matched with a flavor that was scaled back from what was tasted out of the jar. A sweet and tangy tomato profile, with a Worcestershire savoriness, was still there from bite one, but a lot of the depth and complexity was diminished mainly due to just not having enough sauce there.

When this sauce was recommended to me and I saw awards it garnered, I couldn't wait to try it and the initial taste did not disappoint. With a strong sweetness, syrupy consistency, and glossy appearance, it was clear this sauce was crafted for competition originally, but there was so much savory depth that it was also unique and could both stand out in crowd and deliver a robust flavor that's well suited for backyard applications. Unfortunately, I lost a lot of what I loved about the sauce after being cooked and was left thinking, if this didn't hold up great on chicken, would it be even more diminished on heartier meats like ribs and brisket? To get the most out of the commendable flavor, I think this sauce is best suited for use in its raw state and could make a great finishing glaze for wings, a topper for burgers, or even a dip for fries. If you're going to take this sauce into battle at a competition, I do think it'll hold up better there, delivering the good looks and a sweetness that judges will love while retaining just enough heft to be tasted, but really allowing the taste of the meat below to shine through. 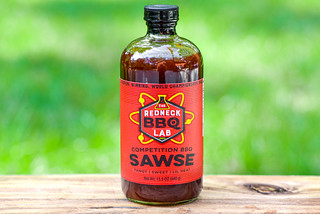