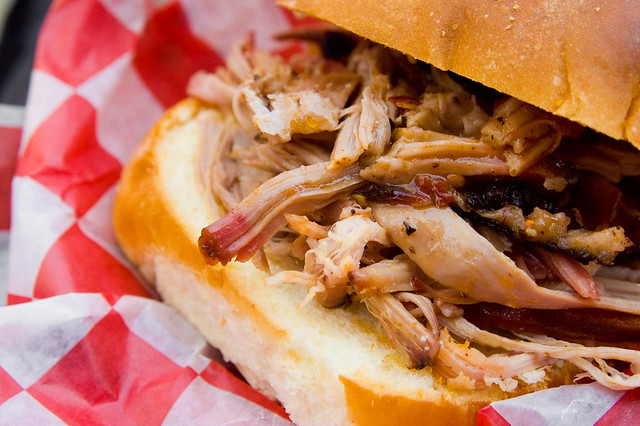 I was bad to my blog last week, but I hope you'll trust me when I tell you that the reason why rightfully outweighed my responsibilities to this site. Now, with the other done, I can get back to business as usual, and last weekend I was in the business of smoking some seriously delicious pork butts. Fire up your smokers, because your about to take a journey through hog heaven, and there's a pulled pork sandwich with your name on it waiting for you at the other end. 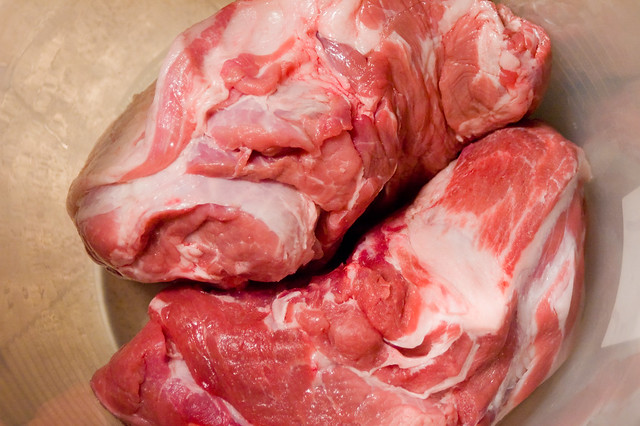 Pulled pork is an epic quest for me, so I usually only end up making it once or twice a year, always making sure to cook enough to last me and my friends a long time. It all starts with some pork butts. I chose two seven-pounders to bring home with me from the butcher, both with excellent fat marbling. I believe this is anomaly in NYC, but finding a pork butt in grocery here is difficult. The first few times I made pulled pork I used a Picnic cut, the lower half of the pork shoulder, which is more widely available here due to the popularity of pernil. Having made pulled pork with both halves of the shoulder, I can say first hand that they both produce equally delicious pulled pork. The picnic usually produces a slightly sweeter, even hammy, final product, but the bone is bigger, there's more fat, and you have to deal with removing the skin (or you can leave the skin on and enjoy some crackling at the end). I have come to prefer the pork butt, since it has a better balance of meat to fat and a smaller bone, producing more pork and less waste. Although it can be hard to find a pork butt at a grocery in this city, almost all butchers have them, another reason to make sure you have a good butcher. 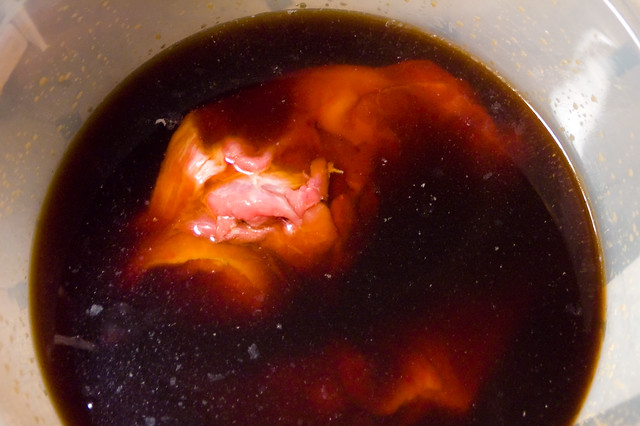 My pork butts never need a great deal of trimming, usually the most I have to take off is some fat if the top layer is too thick. These 2 particular pork butts came perfect, so they went straight from the butcher paper into a brine. My usual brine is a simple mixture of salt, sugar, and water, but taking a cue from Alton Brown, I adjusted my pulled pork brine to use molasses instead of sugar, which I believe helps add a little extra barbecue flavor to the pork in the end. 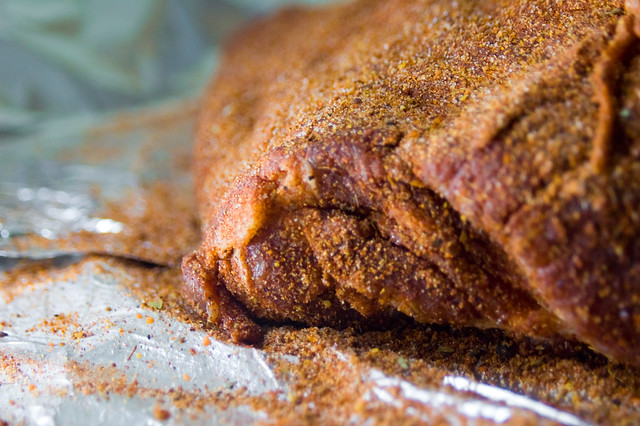 I brined the two butts in a large plastic, food grade bucket for twelve hours, removed them and dried them with paper towels. Then I applied my favorite rub, but omitted the salt, since the brine provides enough of that. As with my ribs, I do not go easy with the rub. I pile it on the pork, rubbing and patting it in, and then reapplying until there is not a piece of raw meat to be seen. Then the pork butts got wrapped in foil and sat in the fridge another 12 hours. 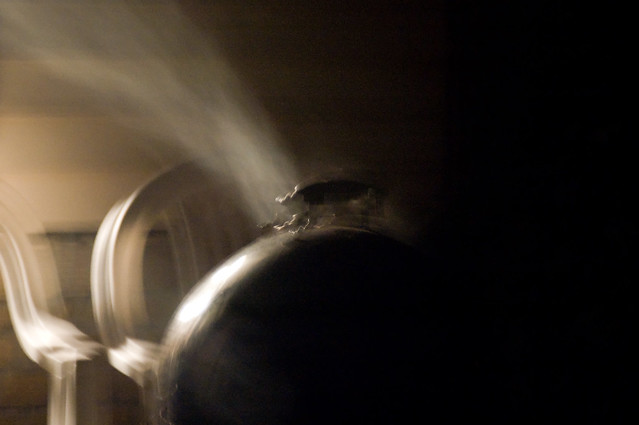 I knew two seven pound pork butts would take anywhere from 14-16 hours to smoke, so I had to start the cooking by midnight if I wanted to feed the Meatwavers by 3pm the next day. Although I equate the sweet smell of smoking meat with barbecue, I have one "crazy neighbor lady" who is convinced I'm burning down the city every time the smoker is fired up. Because of this, I'm paranoid that she'll call the fire department whenever I'm doing an overnight cook, effectively ending The Meatwave. Under normal circumstances, I'd light the fire, get the meat in, and go to sleep once the smoker hits 225 degrees. Instead I sleep restlessly, waking up ever 30-60 minutes to check on things. My fear lies more in my neighbor coming looking for me than smoker temp, as it easily held steady around 225 degrees for the entire 16 hours using the Minion Method. 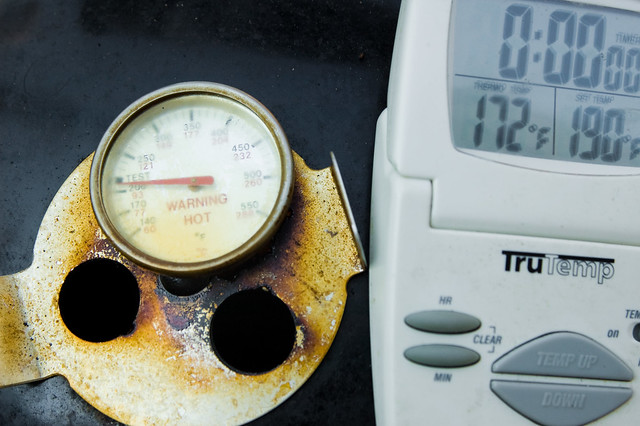 After a mostly sleepless night, day broke, and pork's temperature was rising nicely. Then about seven hours into the cook, it hit 172 degrees, and there it stayed for many hours. This is the plateau, the point where most the fat and collagen start melting away, transforming the meat from tough to absolutely tender. The first time I made pork, I did not know about the plateau and freaked out when the temperature didn't rise for hours, and ended up finishing it in a 350 degree oven. That yielded decent pork, but if you want the best of the best, just stay put and wait, it will take many hours at 225 degrees, but the pork's temperature will begin to rise again and you'll have a smokier, tastier, and more tender final product. 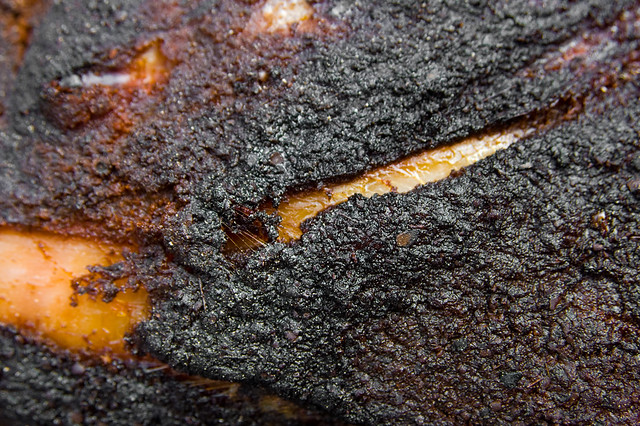 I've found 190 degrees a perfect temperature to remove the pork from the smoker. These butts took 16 hours to get there, which was just a little longer than the 14 hours I originally was expecting. Under 190 degrees I find there's still too much fat left in the butt, and under 180 degrees it's harder to actually pull the pork. I figure it's pulled pork for a reason, and I want to be able to pull, not chop, it, so I give my pork the extra time it needs to get to my desired temperature that results in a butt that's easy to pull and has little fat left compared to when I started. 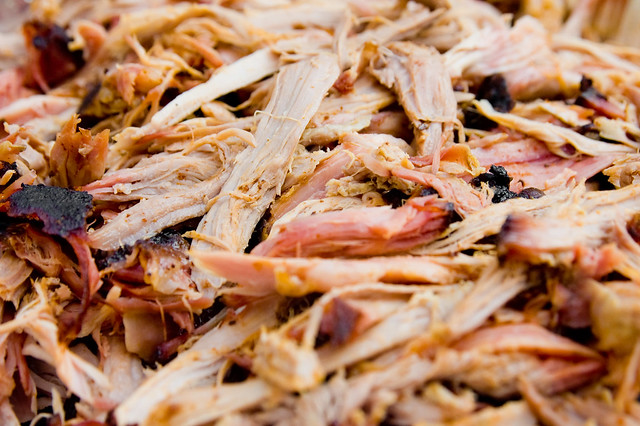 Now all that's left is to pull. In my excitement, I tried to pull this with only about a 10 minute rest, but decided to stop when I realized my finger tips were starting to cook. I had to wait another 1/2 an hour until was cool enough to handle safely. This pork was cooked perfectly, pulling easily with almost no resistance. While I was pulling the pork, I removed most of the extra fat remaining in the butt, but tried to salvage every bit of bark, the dark outer crust that once was the rub, which makes for the tastiest sandwiches. I served the pulled pork on a choice of potato rolls or sweet Portuguese rolls, with another choice of bbq sauce or vinegar sauce, and coleslaw. The sandwiches were great, but this pork doesn't need anything extra, it holds its own. Juicy, tender, spicy, sweet, this pulled pork is what I imagine heaven is filled with and there is not one second in this almost 2 day process that wasn't worth it.

In a saucepan, add the molasses, salt, and 1/2 quart of water. Stir over a medium flame just until all the salt is dissolved. Pour mixture into your brining vessel and add the rest of the water and stir to combine. Completely submerge the pork butt in the brine and then store in the fridge and allow to brine for 12 hours.

Remove the pork butt from the brine and pat dry with paper towels. Rub entire butt liberally with your favorite dry rub. Wrap the rubbed pork butt in aluminum foil and place back in the fridge for another 12 hours.

Remove the butt from the fridge while you start the smoker. If using a Weber Smokey Mountain, light using the Minion Method with a mixture of hickory and apple wood chunks.

Smoke the pork butt at 225 degrees until it reaches 190 degrees, about 12-16 hours. Remove the butt and allow to rest for 1/2 an hour to cool down. Pull the pork using your hands or two forks and serve.