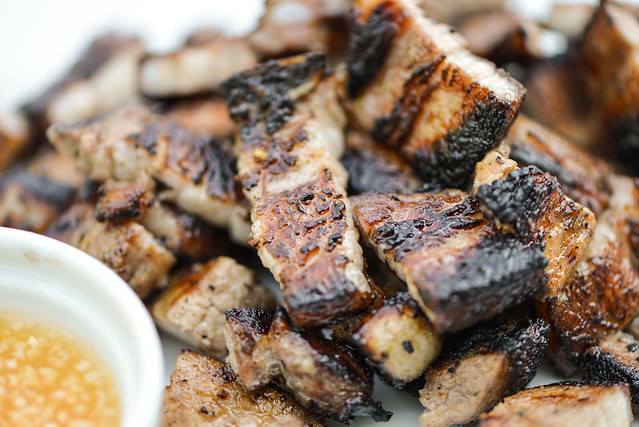 Going to my in-laws is like stepping into pork heaven. I didn't realize what an asset to my swine consumption marrying a Filipino would be, but now that I know, I highly recommend it—or at least befriending a Filipino family, especially around holiday time. My time spent in the muggy days in Houston are filled with tangy crispy fried spare ribs, crunchy pork belly, sweet tocino, tangy longaniza, and so many more gifts from the pig that the Filipinos have worked their magic on. So when looking for new pork adventures for myself, I tend to turn to Filipino dishes for inspiration and guidance. That's how I found Inihaw na liempo—grilled pork belly—which was another win for Filipino pork. 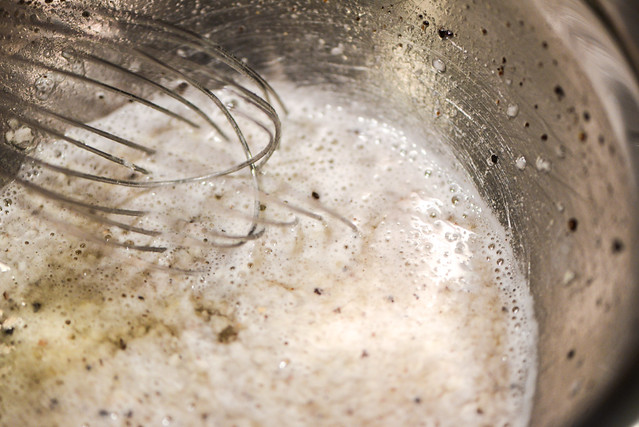 If you're not familiar with Filipino cuisine, I can break it down to one simple component—vinegar. From sour soups to braised chicken to dipping sauces, so much of this island nation's cuisine is dependent on tangy and tart vinegar. This recipe was no exception, starting with a marinade that exemplified Filipino flavors by mixing vinegar with sweeteners—sugar and Sprite—along with garlic, salt, and pepper. 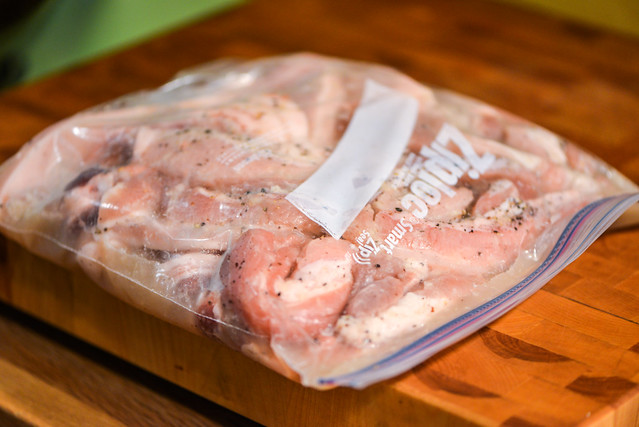 I stuffed quarter inch slices of fresh pork belly into a bag and then introduced the marinade. Most recipes for Inihaw na liempo will call for marinating the pork belly overnight, but this is such a potent mixture that it really can sit for only an hour or two and be good to go, in my opinion. 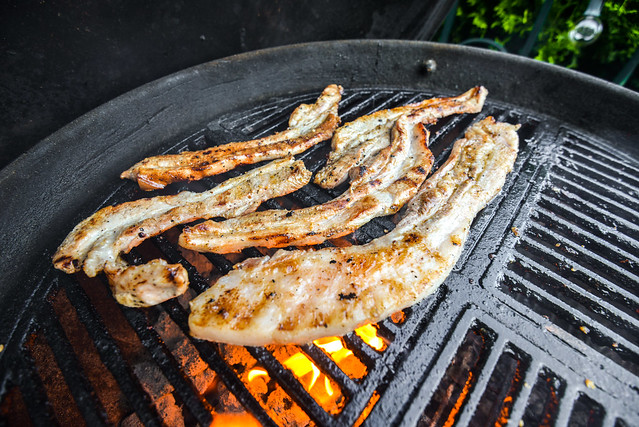 I wanted to stick with tradition here, but I feared that things wouldn't go so well going strictly by the book. From what I can tell, Inihaw na liempo is grilled over direct heat, but when you mix super fatty pork belly with hot coals, flare-ups are a certainty. Knowing this, and wanting to take precautions over burning the pork, I built a two-zone fire so there would be an area with no coals that I could move the pork to if the flare-ups became too intense. 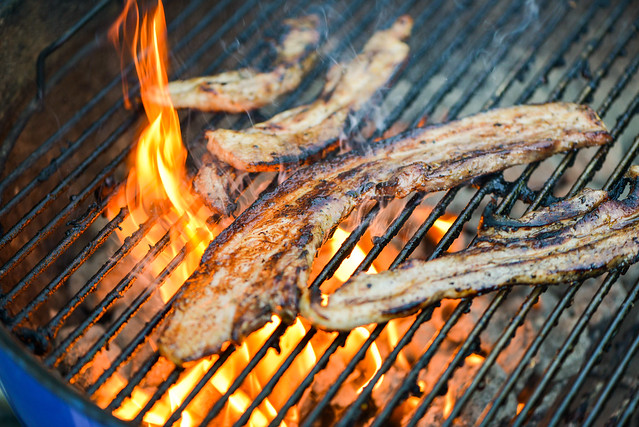 Things on the grill started out well, but as expected, the strips of belly were engulfed in flames in no time. These towers of fire blackened the pork quickly, so I did end up needing to move the slices to the cool side of the grill until the flare-up subsided. 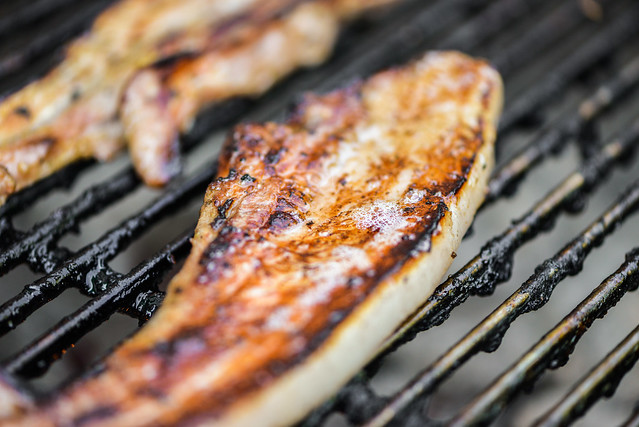 This meant it took a watchful eye to grill these well, but when they started to look like this—browned and glistening—I got the feeling that all this work would not be in vein. 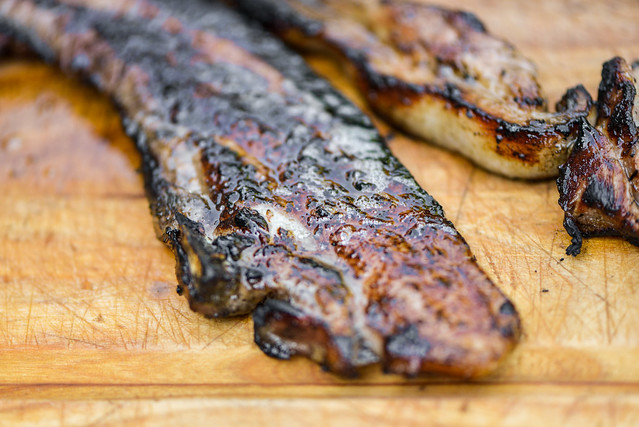 Thanks to the flare-ups, which deliver a lot of heat very quickly, the belly slices were done in no time. They browned/blackened on the outside and the fat became soft and luscious in only about two minutes per side. Some slices may have looked a bit dark, but as I've learned in Filipino cuisine, looks can be deceiving. 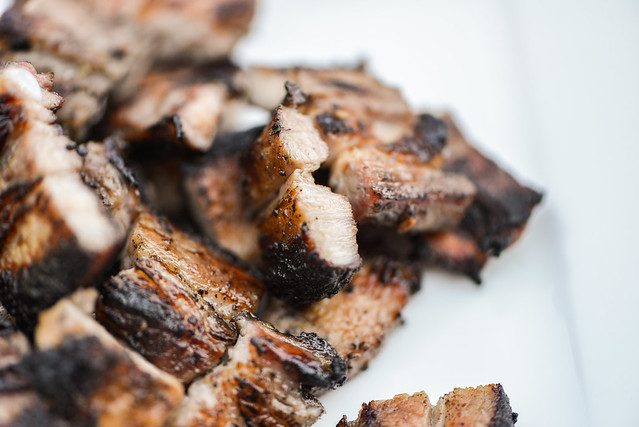 That was certainly the case here, as the belly didn't have the burnt flavor you might expect from the appearance, but rather it was sweet, tangy, and most importantly, super porky. For easy eating, the slices were cut into small strips, then served alongside a vinegar and garlic dipping sauce. Each piece was soft and tender, with a light sugary crust that was put into a nice balance when dunked into the tart sauce. It was a simple dish that tasted more complex than you'd assume, which is exactly the quality in Filipino cuisine that gets me excited for all the awesomeness I know I'm in for every time I head down for a family visit in Texas.

A sugar and vinegar marinade delivers a subtle sweet and tangy flavor to grilled pork belly in this Filipino dish.