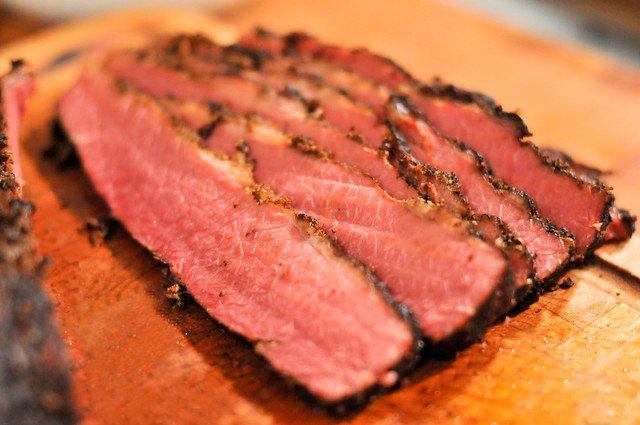 When making pastrami for the first time, I pretty much hit the nail on the head on flavor—the meat was smoky and salty, with a highly seasoned peppercorn, coriander, and garlic crust that screams "pastrami." Still, that cured and smoked brisket flat didn't sit right with me, mainly because of one glaring omission, it was never steamed! Wanting to correct that and improve my pastrami texture and tenderness, I set off to try again, but once I had a brisket home, decided to do things a little differently and turn this chunk of beef into Montreal smoked meat. 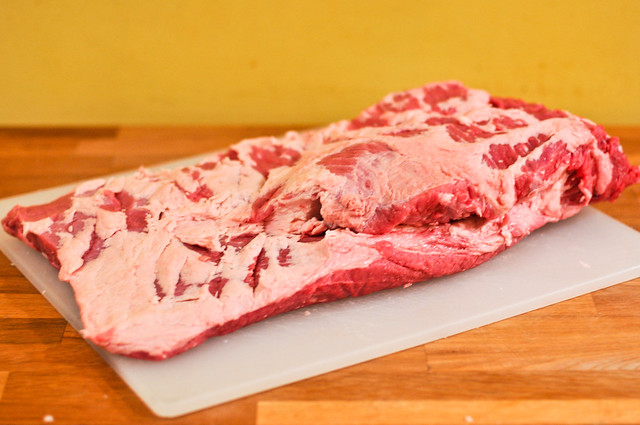 Montreal smoked meat is, more or less, Montreal's answer to pastrami. The process can be almost identical, but there are couple important differences. First is the cut of meat—smoked meat is often made with the whole brisket, letting customers choose between the fatty deckle or the more lean flat, while pastrami is usually just the brisket flat or beef plate. So I accordingly started this off with an entire brisket, and it just happened the only one available the day I went to the butcher was a 16lb monster. 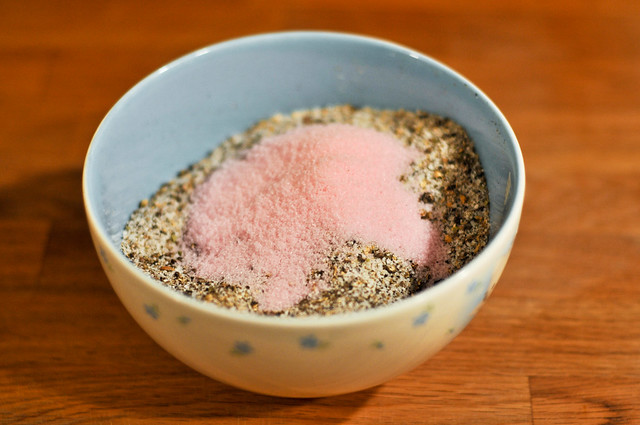 The cure I put together was similar to the pastrami cure, although I held back the amount of sugar. I also decided to ditch the Morton Tender Quick and do a mixture of pink curing salt and kosher salt instead. Getting many questions about the amount of nitrites in the Morton's and not knowing the answer, I thought it was better the second time around to make my own salt mixture to better understand exactly what I was putting into my cure. 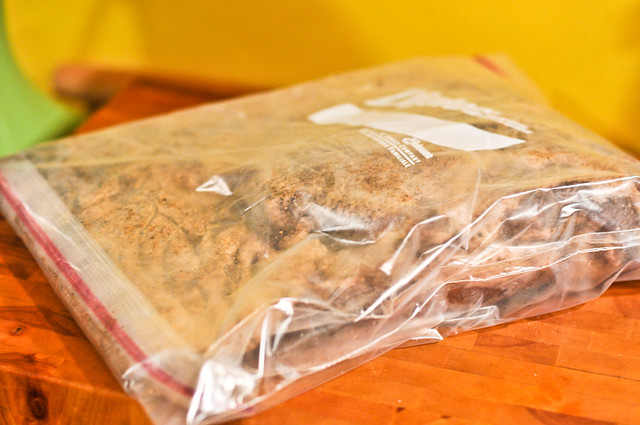 The whole brisket was coated in the dry-cure and placed in a doubled up two and half gallon Ziploc bag. Then into the fridge it went for the long curing process. As the meat sat in the cure, it released moisture, which began collecting in the bag. To ensure the cure was penetrating the meat evenly, I flipped the brisket over twice a day. 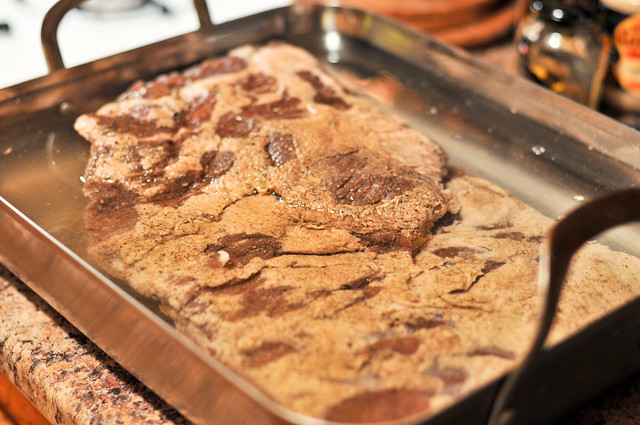 This went on for four days, at which point the cure had enough time to work its magic and it was almost ready to be smoked. But before smoking, I needed to remove the cure and some excess saltiness, which was achieved through a water bath. Swapping out the extra large bowl I used to do this with pastrami for a roasting pan—wchich is a much more practical size and shape for the task—I soaked the brisket in water for two hours, changing the water every half an hour. 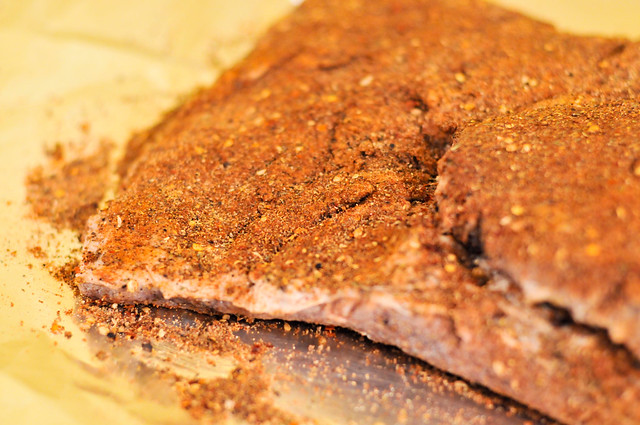 The second important difference in smoked meat is the rub. While some smoked meats will have something similar or the same as the black pepper, coriander, and garlic mixture of pastrami, there's more variation from one smoked meat joint to the next. Having no real point of reference for the most "classic" rub, I decided to put together a somewhat typical Montreal rub thinking it should fit the bill nicely. 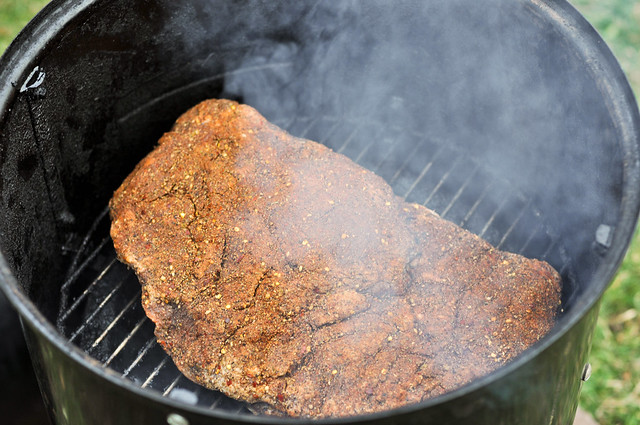 The cured and rubbed brisket was then hot smoked at 225 degrees until the meat was just cooked through, hitting an internal temperature of 165 degrees. There's some debate on whether smoked meat is actually smoked. I contend smoking smoked meat and pastrami is the only way to go, but commenters on Serious Eats mentioned some of the institutions in Montreal may not actually smoke their meat, instead cooking it in an oven. To me that seems wrong, although likely true, but I will never be able to say for sure until I get to Montreal and do my own smoked meat investigation (a very delicious case I hope to tackle some day). 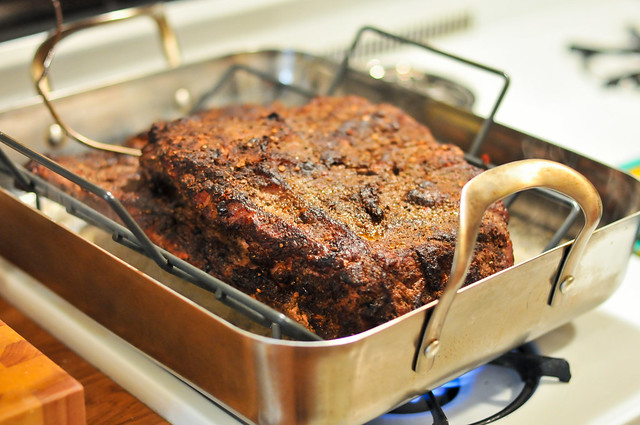 When making pastrami, this is where the process stopped. That time I foiled the brisket and let it sit for a couple hours, then sliced and served. The meat tasted great, but the texture and tenderness was shy of the almost falling apart quality of really good, freshly smoked pastrami. This was because I skipped the final step—steaming.

To correct my previous error, I finished the smoked meat resting in a v-rack set in a roasting pan filled with about one and half inches of water. This was put over two burners on the stove, covered, and steamed until the meat's temperature rose to 180 degrees. At this point the brisket was noticeably more tender than my first pastrami, but not quite at that giggly barbecue stage. 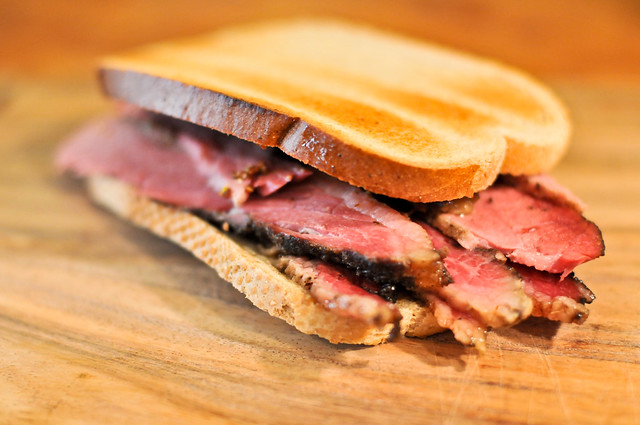 The results spoke for themselves. While still a ways off from perfect, more internal fat rendered out, leaving the meat in that state where it's solid enough to stay together when slicing, but tears easily with just a little pull. In contrast to the overpowering spicy pastrami rub, the diverse Montreal seasoning created a more nuanced flavor that let the meat stand out, while still providing a robustness. Overall, it was a pretty stellar piece of meat that was an incremental improvement over my first try. Now it's just smoke, and smoke again until I have a pastrami or smoked meat that fully reaches its pinnacle, something I'm determined to achieve over my lifetime.

Montreal's answer to pastrami, Montreal smoked meat more or less follows the same procedure with a couple differences in the seasoning and cut of meat that make it its own beast.