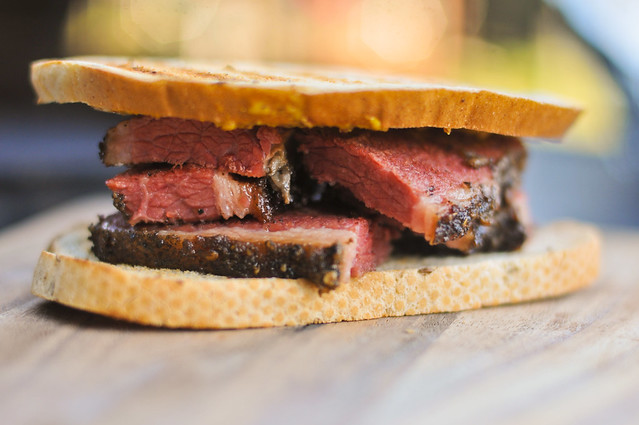 It's well known I have meat on my mind most of the time, but ever since reminiscing about a whole standing rib roast and the subsequent outpouring of love from you all that came with it, gigantic slabs of beef have been dancing in my brain. Staying on that track, I think this pastrami—made from a entire brisket flat—is not only a fitting follow-up, but takes the whole beef affair further with the addition of curing and smoking. Oh man, we're all are in for a treat with this one... 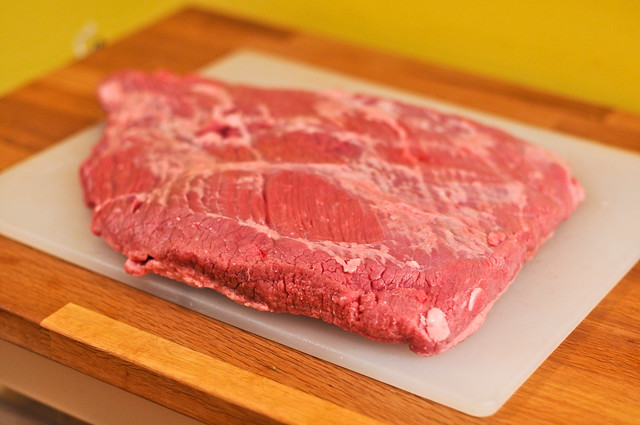 This recipe comes with a asterisk though, it was my first ever pastrami, and since I cooked it, I've already learned more about this cured meat tradition that's wasn't reflected in my starting process. On of these points is the cut of meat. Yes, it's true many pastramis out there are being cooked up with the brisket flat, but I've since learned that it's the less common navel cut that's more traditional and might be key in upping my pastrami game (thanks to its intense fattiness). Still the flat is easier to procure and makes a mighty fine pastrami, and that's exactly where I started. 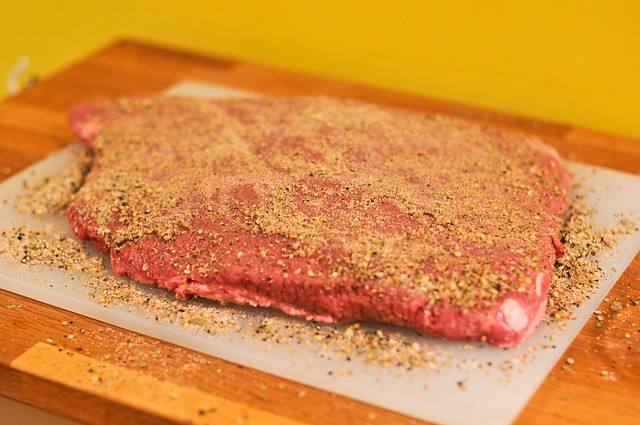 Once I had the flat (the point was removed and smoked into burnt ends), I started the long curing process. Being my first foray into curing, I did a lot of research into this and opted for a dry cure which would increase the the concentration of salt on the surface, draw out moisture by the process of osmosis, then the meat would reabsorb this liquid over the time of the cure. Compared to a liquid brine, this method results in an increase in the penetration and overall flavor of the cure. 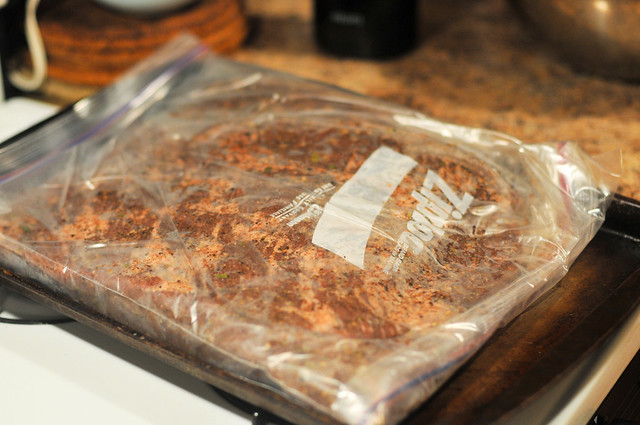 I used Morton Tender Quick as starter (avoiding having to find the right ratio of pink salt to regular salt) and mixed that with other traditional curing seasonings like brown sugar, pepper, coriander, garlic, and allspice. The brisket was coated and into a doubled up extra-large Ziploc bag it went. It then sat in the fridge to cure for four days, and I flipped the bag twice a day to ensure the brisket was evenly curing. 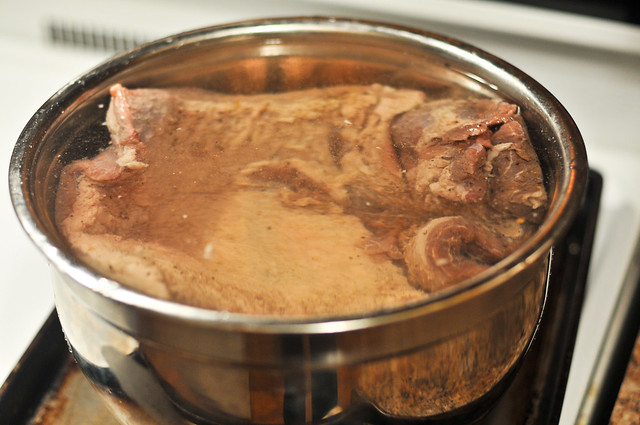 I was kind of expecting the beef come out of the cure the deep red color of cured meat, but instead the outside was an unappealing gray. I was kind of disheartened, thinking my cure didn't work, but I went forth with soaking the meat to remove some of the saltiness and prepare it for smoking. 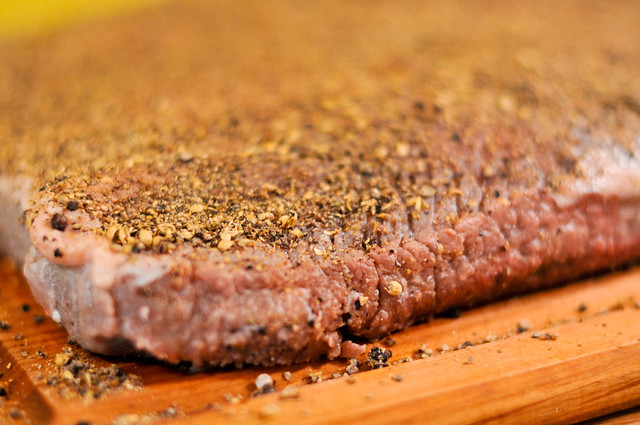 Before hitting the smoker, the flat got a heavy coating of that ubiquitous pastrami rub that consists of mainly black pepper and coriander, with a little granulated garlic as well. The rub was so thick and potent, the the house was already filling with the aroma of pastrami. 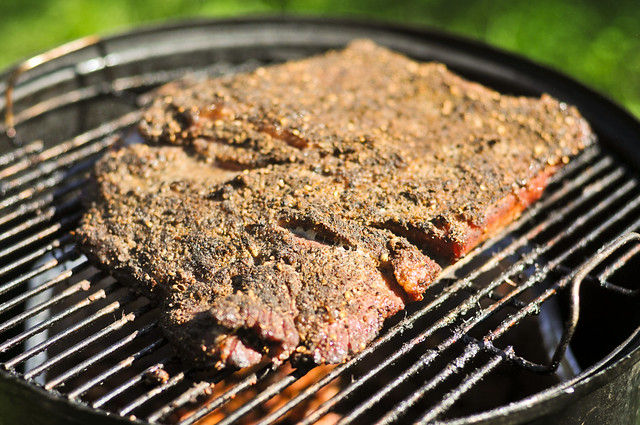 When it came to smoking, I was a little of unsure of myself. I'm so used to barbecue brisket, which I cook to between 195 to 205 degrees, but pastrami is a different beast. While barbecue is smoked until most internal fat and connective tissue breaks down and renders, I wasn't sure that was the right approach for pastrami, which needs some extra structural integrity to be able to be sliced thin. In turn, thinner slices means they'll be more tender just by the cut alone, and maybe cooking the meat to those high temperatures was not fully needed. 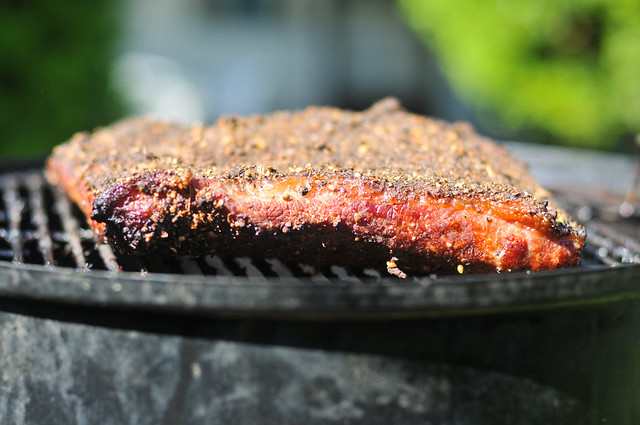 So I let the pastrami smoke until it hit 165 degrees, when it was just cooked through, but still a relatively solid piece of meat. At this point I wrapped the pastrami in foil and let it rest in a cooler for a couple of hours. 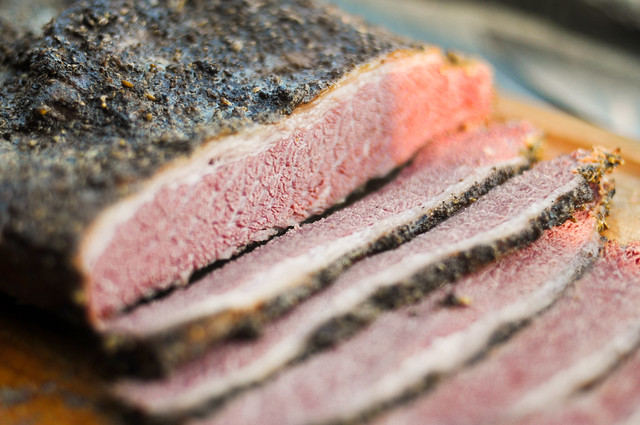 This rest resulted in an accidental step in the process I didn't consider at all, steaming. After smoked, a traditional pastrami will either be finished by steaming, or let cool, then steamed to bring it back up to temperature. Either way, the steaming helps the overall moisture, making those tender slices all the more succulent. Since the pastrami was hot when foiled, it did "steam" in a half-assed way, but not to the extent I should have done. 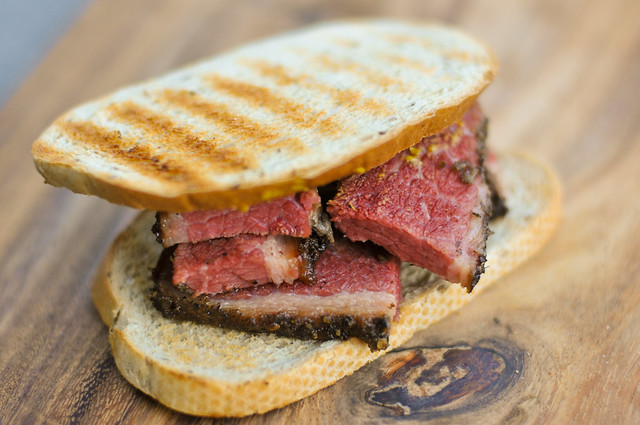 Even with some missteps that will be corrected in future cooks, this was a solid pastrami. The first slice reveled the beautiful earthy red color I thought I had botched. The meat had the exact salty, spicy, smoky flavor you'd expect from a good pastrami, and eating hot, freshly cut slices was a treat. Cooking the brisket to a slightly higher temperature through steaming would have improved the texture slightly, but overall, there was not one complaint over how the pastrami turned out. So with that, I've let my mind carry me through another post of a massive hunk of beef. Now we just have to wait a week to see where it brings me next...