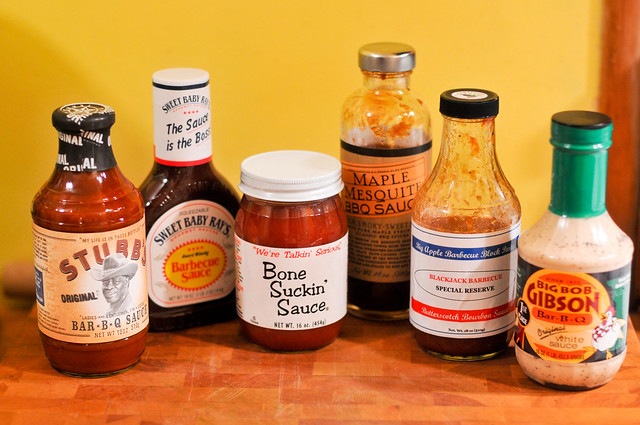 I'm a DIY type of guy. As a youngster I spent endless hours constructing engineering marvels with Legos, which morphed into a short-lived stint in an extremely indie band, then into a master of darkroom chemistry, and now that spirit lives on in my barbecue and grilling. With a long history of constructing things from scratch, I've been a big advocate of bringing that philosophy to barbecue sauce. I can argue endlessly about how throwing a few cupboard staples together in a pot can churn out a sauce that can outdo just about anything you pick up in the store. So as my grill and I have been inseparably going on seven years now, inevitably an ocean of barbecue sauce has flown out of my kitchen.

Coming with the territory of being such a barbecue nerd is the perception that I must love any gift that's related to grilling. Barbecue sauce is up there as a top present, and as I've continued to crank out my own sauces, I've also amassed a nice collection of unopened bottles. In an effort to reclaim my cabinet space, I decided it was time to put those sauces to work, giving them some proper credit and good use in the form of barbecue sauce reviews.

I will still preach that you'll be better served making your own sauce, but I also relent, knowing that for most Americans it's the bottle or nothing. There are some great sauces out there, and with my years of sauce making experience, I'm happy to provide some guidance on differentiating the excellent from the horrid along with some best use pointers.

Here's a little primer by which all sauces will be reviewed:

I, the Meatmaster, will be the main reviewer for all sauces. If I happen to have some friends over on a tasting day, I'll definitely get some other opinions, but I want the reviews to be consistent, and a single reviewer is a nice, reliable constant.

Sauces run the gambit from thin and drizzly to as thick as molasses and everything in between. There's no right or wrong with thickness and texture, but some are sure to be more pleasing than others, and it can also help define the best use for the sauce.

Smell can make or break a sauce. You can have a perfectly cooked pulled pork, but top it with an off smelling barbecue sauce, the whole thing can brought down by an unappetizing aroma as its brought up for a big bite.

I think there's good truth in the saying that we with our eyes first. Color can have a big effect on how sauced food is welcomed prior to actually tasting it. A nice robust red is apt to get a mouth watering more than a dark, sludgy brown.

Barbecue sauce should first be judged in it's raw form. Most sauces are developed for their flavor right out of the jar, so this carries the most weight in testing. This is barbecue sauce as a condiment, which how it's marketed and packaged for mass consumption.

I would wager that most barbecue sauces bought in a store are going to be used for cooking one way or another. Since a sauce's flavor and texture can change pretty dramatically during the cooking process, I think it's important compare and contrast how the sauce evolves when it's introduced to heat. For tasting cooked sauce, I'll be using chicken legs exclusively with my standard barbecue chicken recipe, minus the preseason with a dry rub, on my Weber Performer with Kingsford charcoal.

Why chicken legs? First, economics, good quality chicken legs are pretty inexpensive, so they're easy on the wallet to do lots of sauce tastings. Second, I always think of chicken as a blank slate, waiting to take on any flavor introduced to it. The barbecue chicken recipe definitely achieves that, with the sauce both baked into the meat and used as a glaze at the end. I also prefer legs because the dark meat has more flavor than the white meat breasts, so even though barbecue sauce will dominate, you get some understanding of how the sauce will play with meat.

Most sauces are not all purpose, each having it's own useful spot in the spectrum of barbecue and grilling applications. Even though testing will only be between condiment and cooked on chicken, I believe that provides enough information to give educated recommendations for how the sauce might best be used.

Taking all of the above factors into consideration, each sauce will be graded on a one to ten scale, with one being god awful, and ten being enlightenment by barbecue sauce. This is mostly so you can get a quick scan on how the sauce is stacking up, but I'd recommend reading the whole review, because even a middle-of-the-road sauce may have characteristics you might be looking for.

Yes, I know this has been done before. There's a an entire site already dedicated to reviewing barbecue sauce, and it's done incredibly well. I recommend giving that site a read and compare and contrast the overlaps between here and there. I think there's amble space on the internet superhighway for more than one voice speaking for barbecue sauce and more reviews gives everyone a better hold on what makes a barbecue sauce great.

These reviews are starting out as a way for me to use up sauces sitting around the house, but since those will be exhausted fairly quickly, I will be accepting sauce submissions. You can email me for details on how to submit you sauce. Also, I more than welcome reader recommendations, so feel free to send your favorite sauces my way and, if I can get my hand on it, I'll be happy to give it a proper review. All sauces must be labeled and properly sealed.

With a handle on how the sauces will be judged, I'm proud to give you The Meatwave's Sauced line-up > >