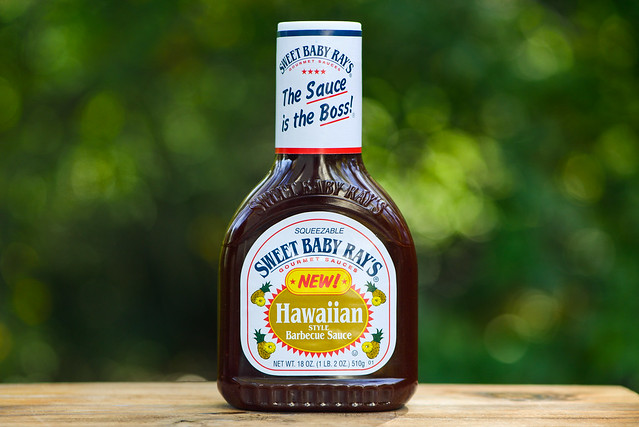 The addition of sweet pineapple juice creates and extra sugary and fruity flavor profile, but does so at the expense of barbecue sauce complexity and balance. 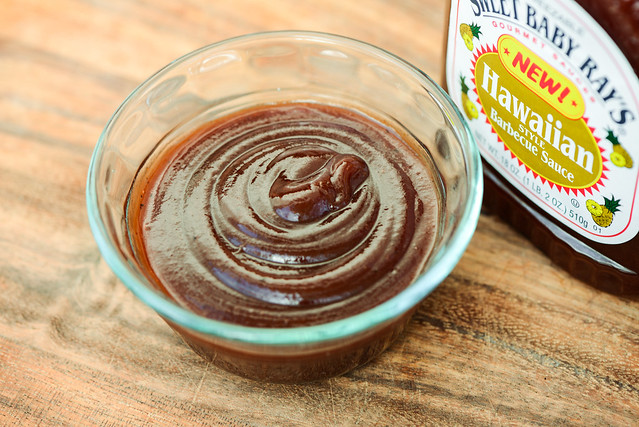 As they say, "The Sauce is the Boss." Well, at the foundation of the Sweet Baby Ray' story, Chef Larry Raymond more correctly is the boss. He's the man behind the brand, which all started in 1985 when this Chicago native entered his sauce into the Mike Royko Ribfest and beat out nearly 700 other entrants. From there, he took his sauce—named after Larry's brother David, who's nickname was Sweet Baby Ray—around the Midwest, selling it in mom-and-pop shops across the region. It was the period between 1996 and 1999 though that the sauce really took off, going national and becoming the ubiquitous brand it is today, purchasable in just about any grocery store and in nine different barbecue varieties.

The initial aroma of this sauce is extra sweet and fruity. There isn't a lot of depth right off the bat, but with some additional whiffs, that sugary profile gains some extra character by way of molasses and a very mild tang. There's also a slight onion-y note mixed in, and no hint of heat at all.

This glossy, smooth sauce has a dark maroon hue and is mostly opaque. Still, it's possible to make out some specs of white and black spices peppered throughout. Its consistancy is medium-thick and falls in two to three very large drips at first. Then one or two smaller drips very slowly release and a thick coating of sauce is left clinging to the silverware.

The first taste that comes out of this sauce is a crazy amount of corn syrup. That intense sugary sweetness gets a little balance from a vinegar tang that comes in at the same time a molasses flavor. Then, as the sauce settles on the tongue longer, a strong pineapple component comes out and melds with tomato and an increasing tartness. It's hard to make out, but there's a little garlic and onion in the background, along with the slightest bit of heat that makes an appearance only at the end. The final aftertaste is super fruity, sweet, and tangy. 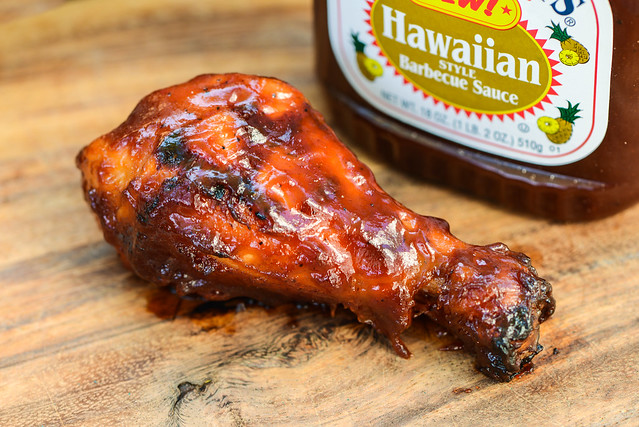 This sauce coated the chicken in a thick, even layer that baked down great over indirect heat. Then over direct heat there was some nice caramelization without any burning. The flavor profile tilted to even more sweet and fruity than out of the jar. This gave the meat an almost candy like, sugary profile as some of the depth and contrasting flavors, like molasses and vinegar, became very downplayed.

As a supermarket sauce, I've been a believer in Sweet Baby Ray's, whose original recipe has a nice balance and contrasts with great grilling qualities that make it a versatile, readily available sauce. I've experience a bit of a mixed bag with their other varieties to date though, and this Hawaiian recipe didn't leave me singing a lot of praises. To me, it kind of tasted like someone thought adding a ton of pineapple juice will just make the sauce "Hawaiian," but in doing so, it pushed the sweetness factor through the roof and took away some of the depth and contrasts that make barbecue sauce unique. I'm not quite sure what foods I'd want to coat in this sugary and fruity profile, but I think if I were to add in some soy sauce, ginger, garlic, and a little more pepper to this sauce, it would start to become something more balanced and layered. So I'm not recommending this sauce for any meat in particular, but as something you can pick up and just make a few additions to in order to turn it from a sauce that's just alright into one that would go great on some chicken or beef skewers, wings, and more.