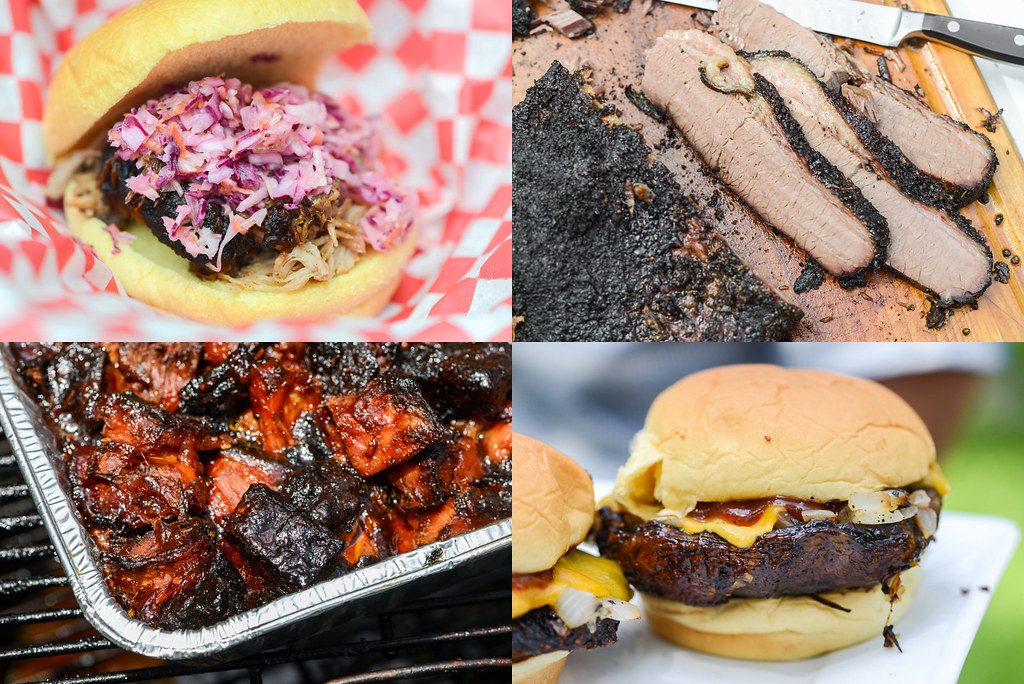 I always look forward to Carne-val—the annual Meatwave celebration of all that is meat—since I use it as an excuse to go all out and smoke up a ton of barbecue. This year it was extra special though because Carne-val fell on Memorial Day, and the collision of two huge grilling events provided an opportunity to really out do myself in every way, and that's exactly what we did when we literally invited the entire neighborhood and then stocked up on 40 pounds of meat to ensure no one would go home hungry. 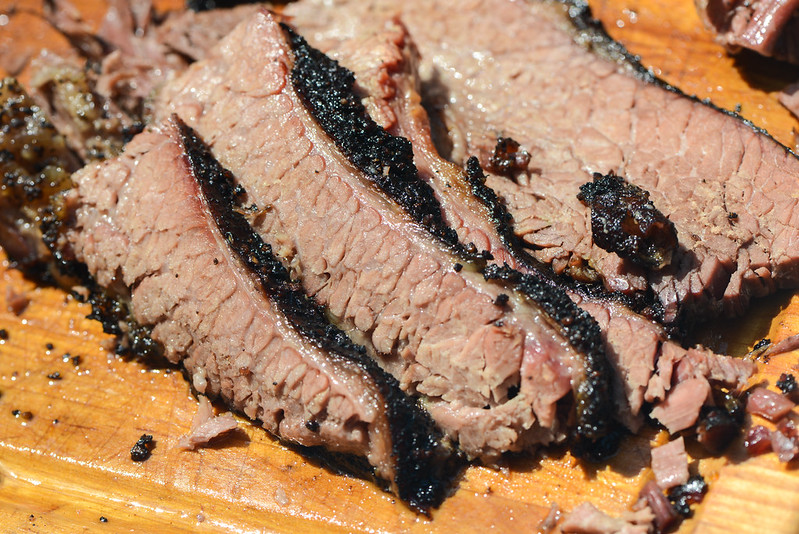 Brisket has been at the top of my to-do list for a while now, especially since I'm becoming more well versed in the ways of Texas barbecue. Durham has brisket problem though—it's all flats and no packers around these parts. Because I was away the week prior to Carne-val, I didn't get a chance to place an order for a packer anywhere, so figured I'd end up having to cut brisket from the menu, but low and behold, the first store I went shopping at had a 15-pound beauty just laying in wait for me. I picked it up, brought it home, coated it in salt and pepper, and then tossed it in the smoker. I let it smoke 12 hours as is to get a thick, crusty bark, then wrapped it in butcher paper and let it cook until it hit 203°F and had that tell tale jiggle that lets you know its done. After a couple hours of resting in the Cambro, I was rewarded with the best brisket I've ever cooked. It had soft, luscious fat, big beefy flavor, and a strong peppery crust that made this Texas staple a true delight. 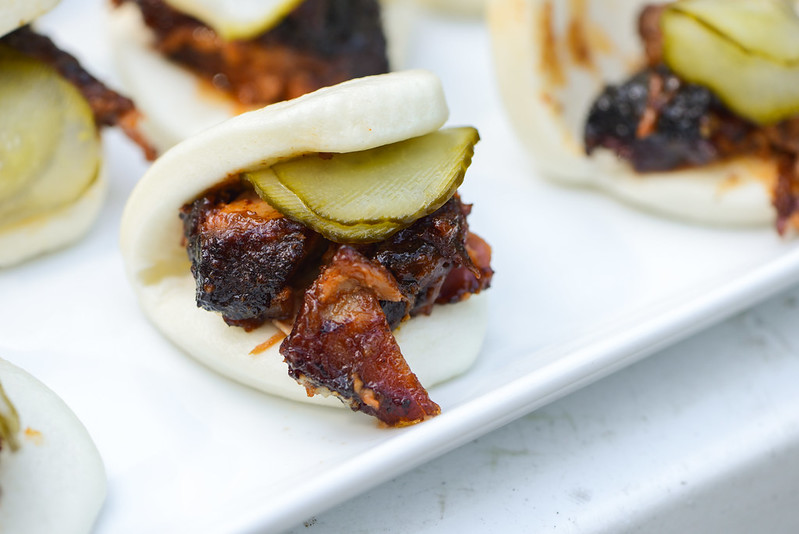 My original plan was to pick up two briskets and divide the second one up, making the flat into pastrami and the point into burnt ends. That idea didn't pan out, but I kept the burnt ends thought and instead made them using pork belly.After smoking the belly to doneness, I cubed it up, placed it in a tray along with barbecue sauce, and put it back into the smoker for another few hours. The end result were crusty burnt ends with still tender innards that were made even better after being assembled into steamed buns with a couple slices of quick pickles. 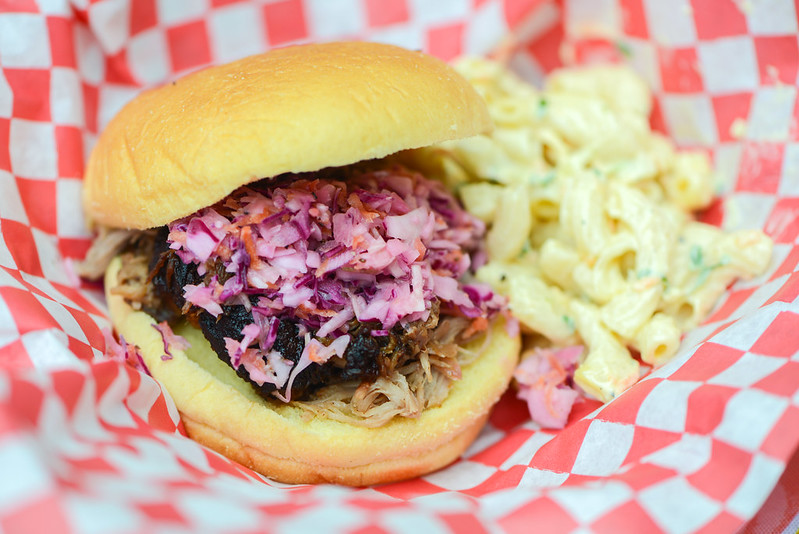 I also smoked up a couple pork butts—always a good choice for when feeding a crowd. After falling short in my shoulder game for a while, I'm finally back on steady ground and both of these butts turned out as tender and juicy as can be. We finished off one of them completely, but I had an entire butt leftover that I pulled and froze, so look forward to some creative dishes being made out of that soon! 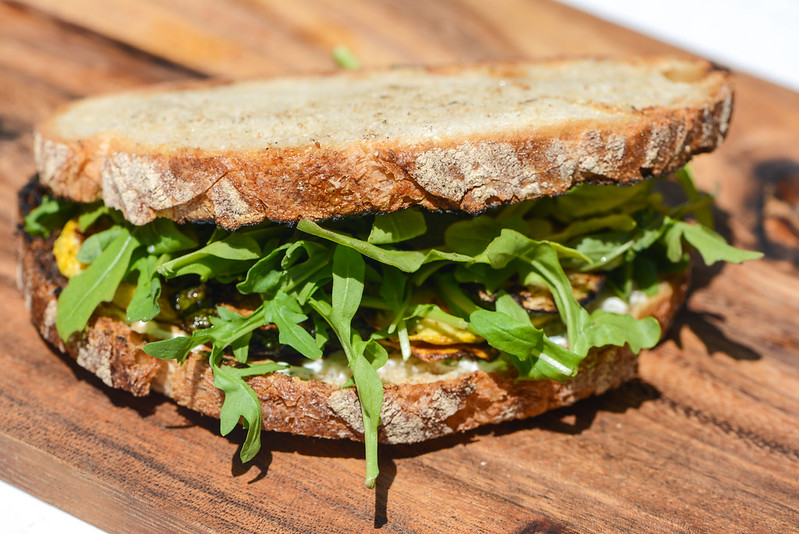 So that covered the tons of meat, but lets not forget all the non-meat eaters and the great stuff they deserve as well. I started the vegetarian options off with these summer squash sandwiches comprised of grilled yellow and green squash on toasted rustic bread with an herb and garlic goat cheese, balsamic, and arugula. They were mighty tasty, but I unfortunately did a horrible job getting a decent photo of them. 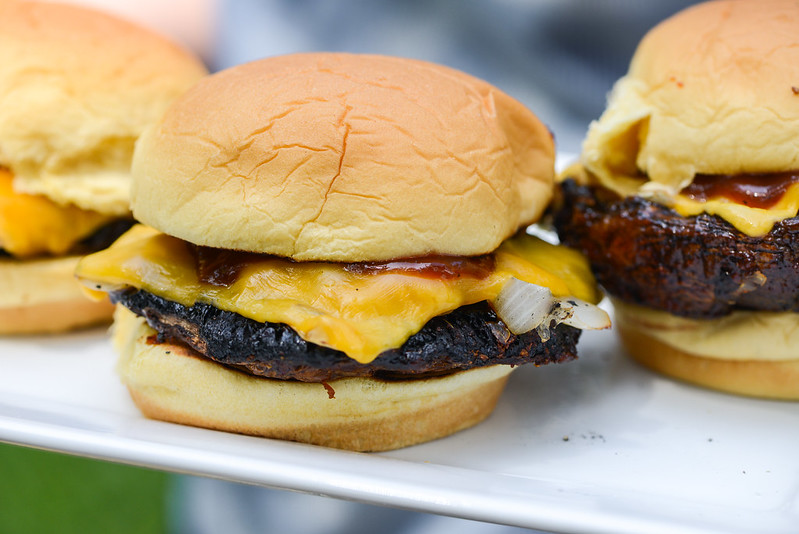 Since I had already made a ton of rub and sauce, I figured I might as well keep putting those to work, which is where the idea for these barbecue portobellos came from. I coated each mushroom cap with rub, then grilled them until tender, and finished them up with a brushing of barbecue sauce. I then placed them in rolls with charred onions, a slice of longhorn cheddar, and a little extra sauce for good measure. I didn't actually get to try one of these, but they at least looked pretty stellar. 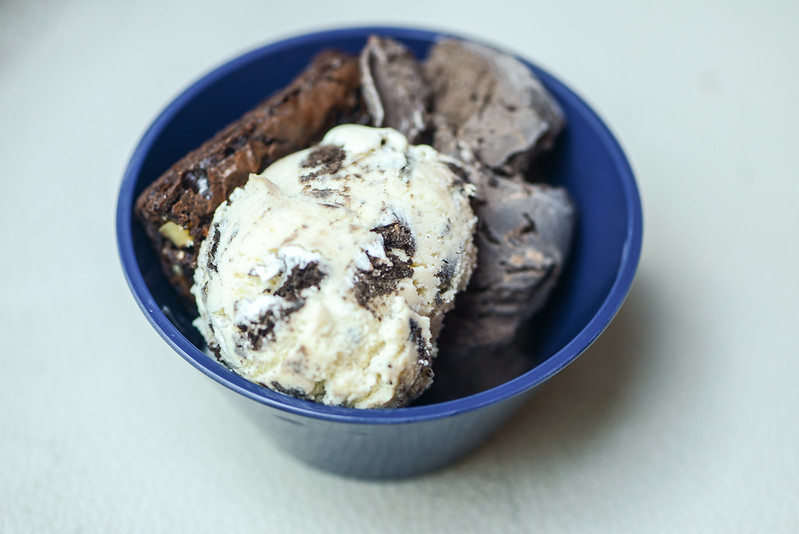 Homemade ice cream was a regular feature of Meatwaves back in New York, but for some reason I fell out of the practice after moving to NC. Carne-val proved to be a good motivation to get me back into the ice cream game and I churned up a couple of my personal favs—cookies and cream along with dark chocolate with mint chip. 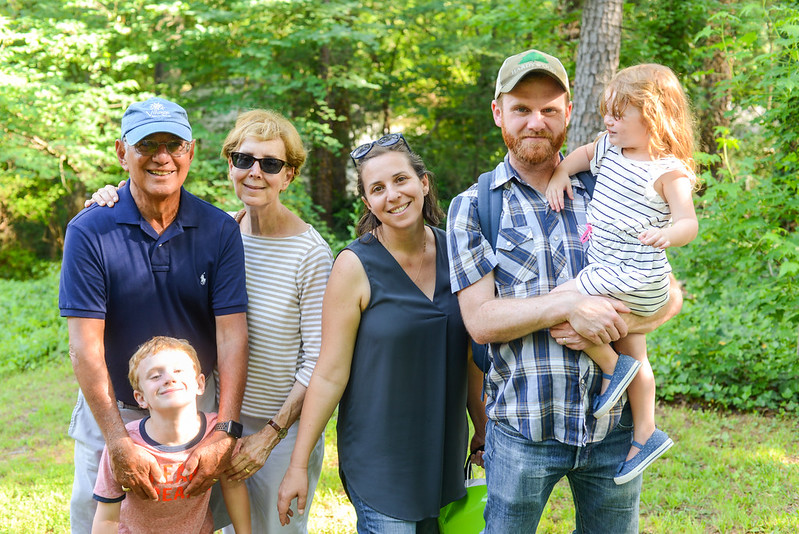 While the food was tended to with loving care, this Carne-val was definitely more about the people I spent it with. First lady of the day was the birthday girl, Jenny, who brought along the entire clan, including parents. This marks the third time we've celebrated a member of her family's birthday at a Meatwave, so just one more to go and we'll have hit them all. 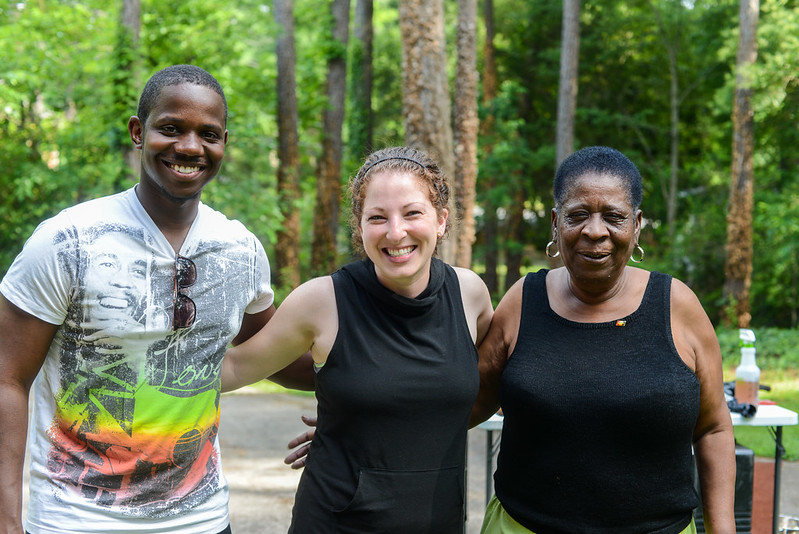 We wanted this blow out to be a community affair, so invited all of our neighbors and got to spend the day with a few we knew along with a few we meet for the first time. Here we have Bernard and Lauren from right across the way with Sandra from down the block. 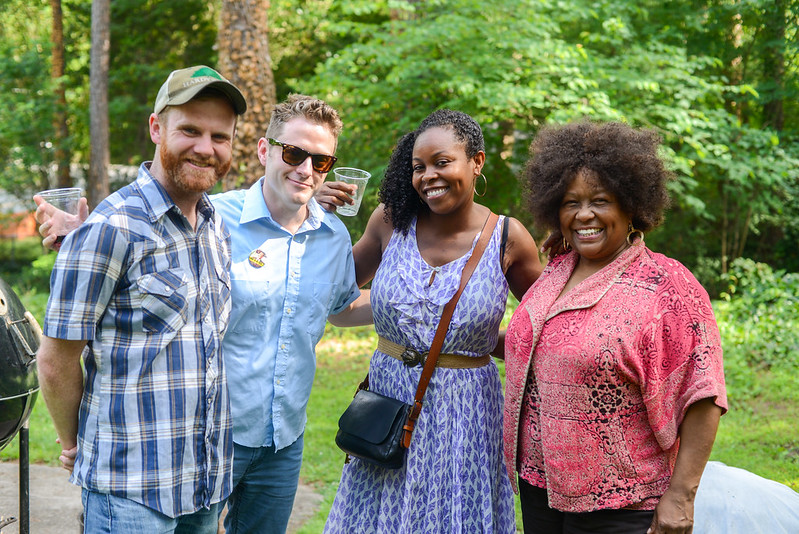 Next we have the regulars of Bryan and Patrick with new Meatwavers Shola and Beverly. 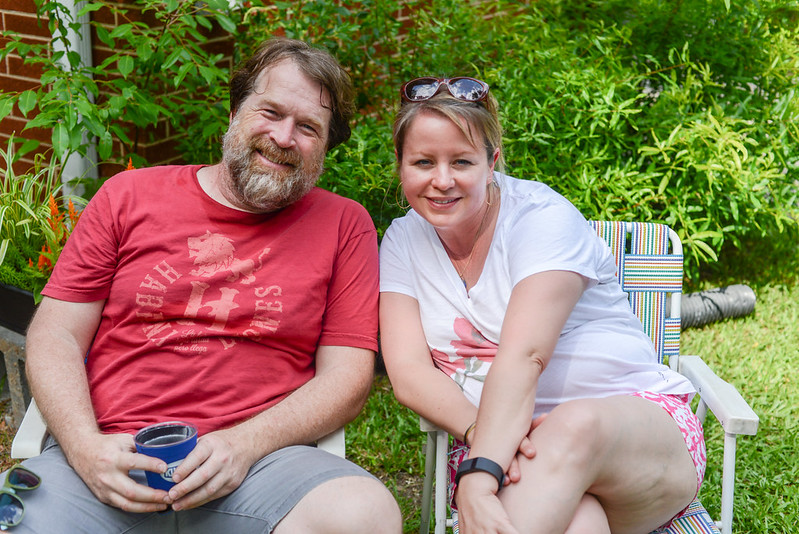 We were happy to finally have Josh and Mary be able to make it. It's been a running theme that they're out of town during every Meatwave weekend, but stars aligned for the magical Carne-val that allowed them to attend. 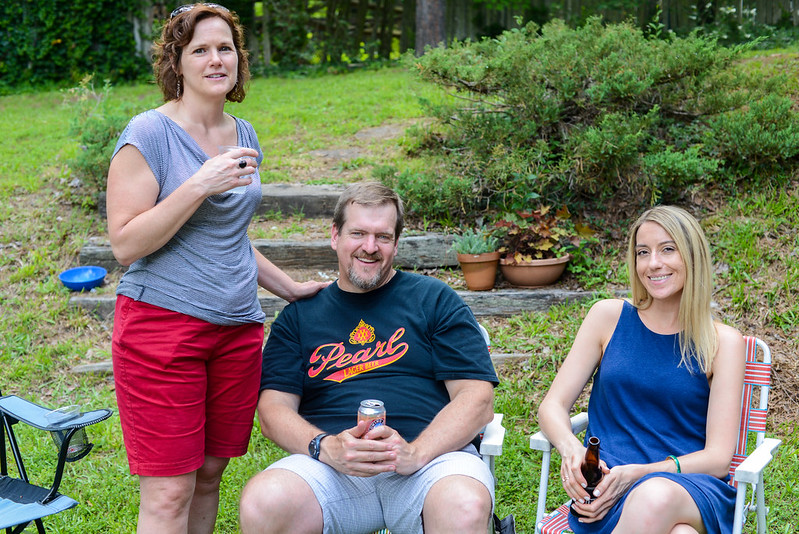 Here we have Sue, Chris, and Kim, in post brisket consumption state. 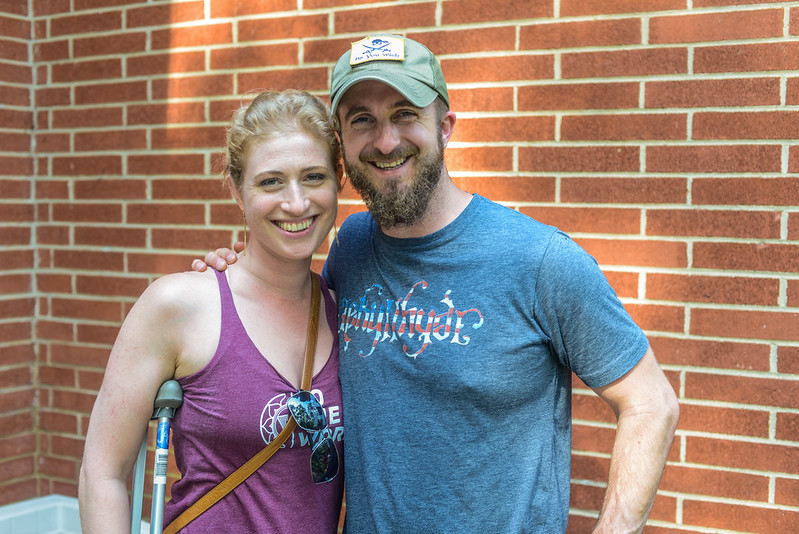 It's always a good day when Chris comes to join in the fun, and he gets extra points for bring along a new Meatwaver as well. 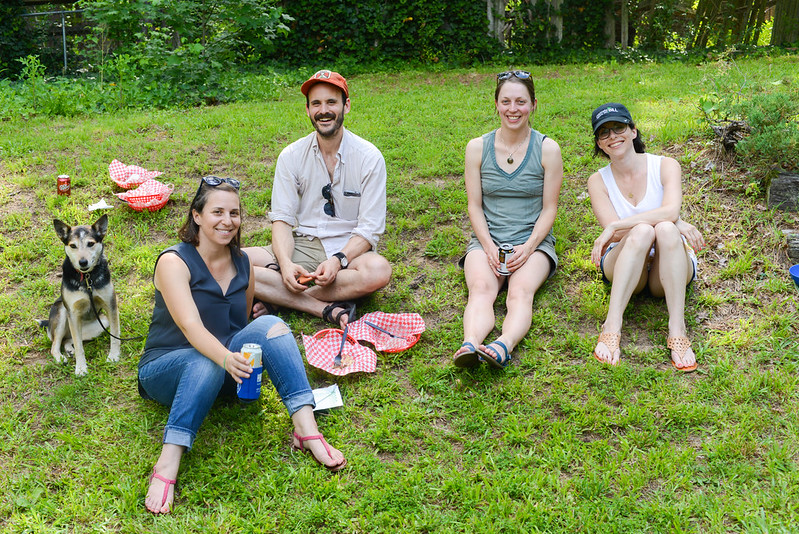 It was Jenny's day, so she gets double representation, this time around relaxing with Evan, Meredith, Sarah, and... 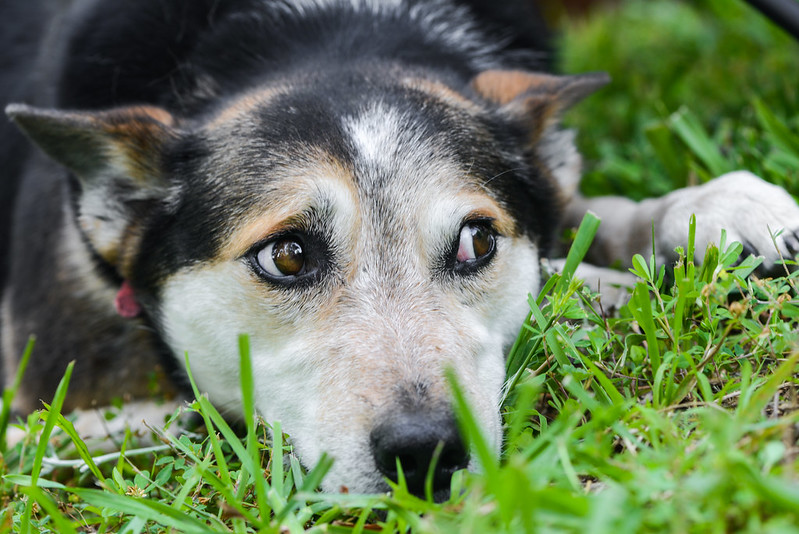 Betty! I love Betty so much, but am feeling a bit like her in this photo right now—sad Carne-val is over, but always looking for that next piece of meat!