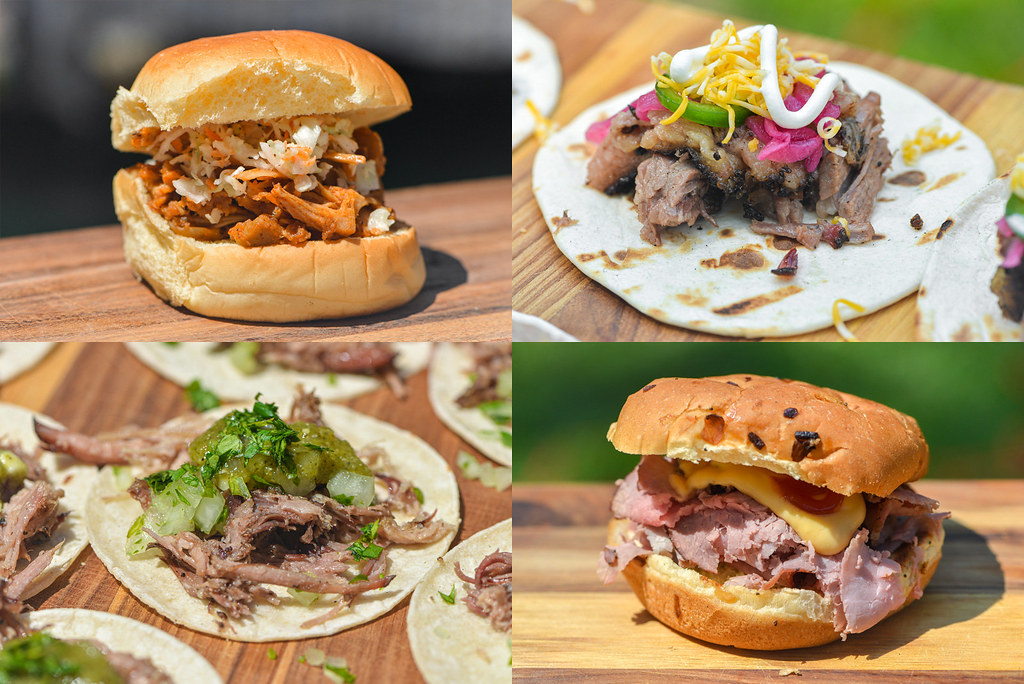 Ah, Carne-val, my favorite day of the year. This celebration of meat has been an annual occurrence since our inaugural season in 2004, and in recent years it's become the one time in the season that I bust out both smokers, load them up completely with meats and other goodies, and then invite the entire neighborhood over to dig in. I relish the long night and day of low and slow cooking, and while that usually means the same few cuts of meat grace plates at every Carne-val, I try to do new and creative things with them each time, and this year's menu line-up was no different. 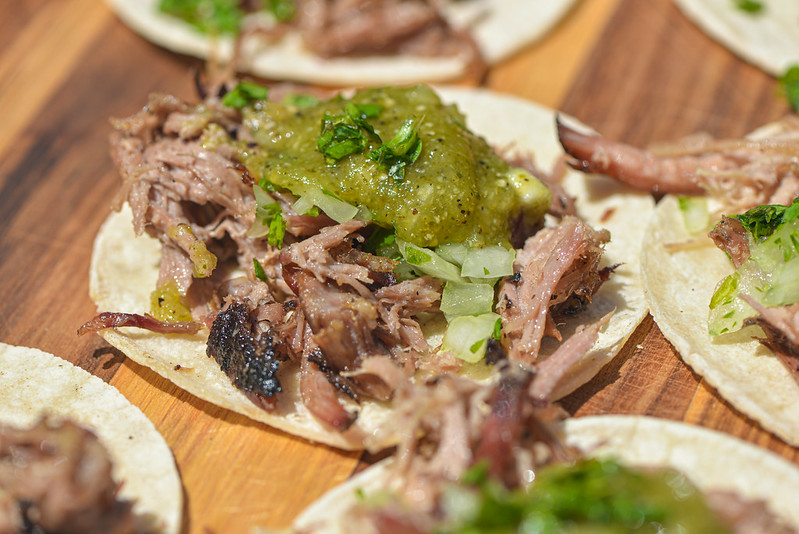 It's not really a Carne-val without pulled pork. I've been cooking two or three pork butts each year for the dual purpose of feeding a ton of people and also to have sufficient leftovers to make even more recipes. I tried something a bit different with my pork butts this time around though—instead of giving them the standard barbecue seasoning, I went with a carnitas-inspired tilt, and boy was the end product incredible. Fittingly, I decided to serve the smoked and pulled pork in tortillas with cilantro, onion, and salsa verde. 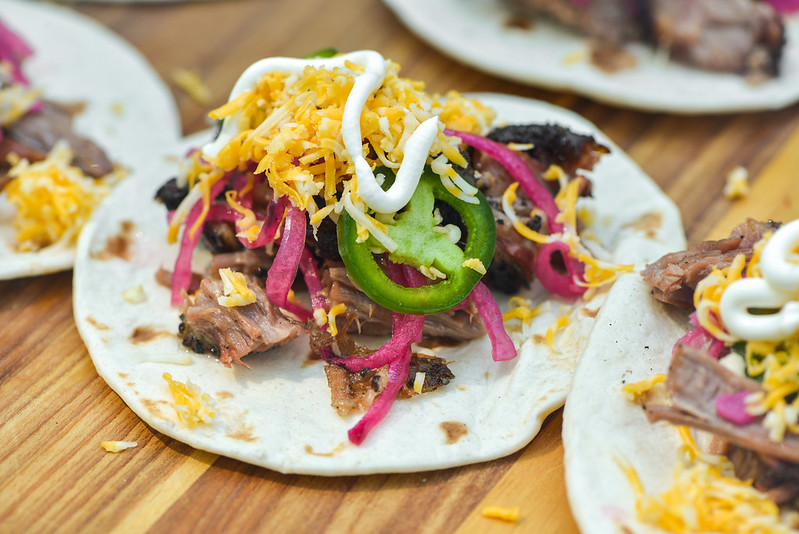 Brisket has also become a go-to meat for Carne-val, especially now that I'm more adept at cooking it and what comes out of my smoker is more to my taste than any brisket local barbecue joints are slinging around here. Keeping with the taco idea, I diced up this Texas-style brisket and served it in warm flour tortillas with pickled red onions, Longhorn cheddar, fresh jalapeño slices, and sour cream. 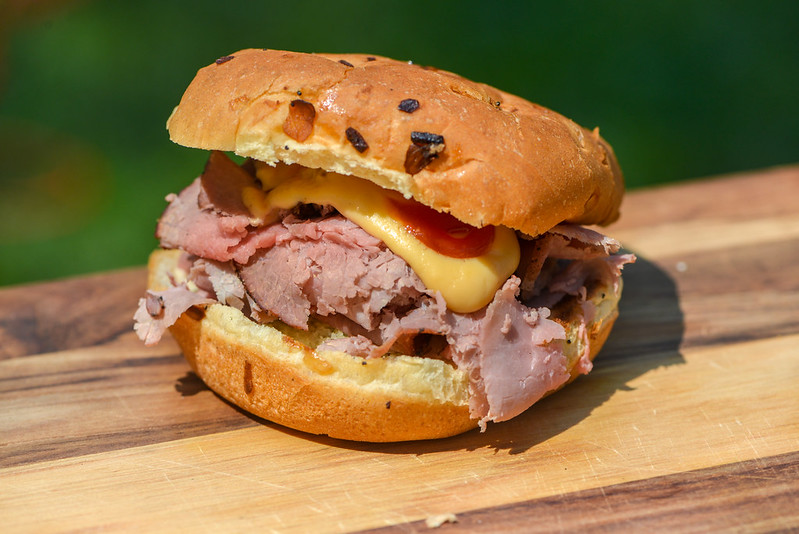 Ever since getting a meat slicer a couple years back, making a homemade variation of an Arby's beef and cheddar sandwich has been on my to-do list. Carne-val seemed like the right backdrop to try that out and I wasn't left disappointed. I grilled up a couple eye round roasts to medium rare, which I then thinly sliced and piled into onion rolls with a homemade cheddar cheese sauce and a spiced ketchup. 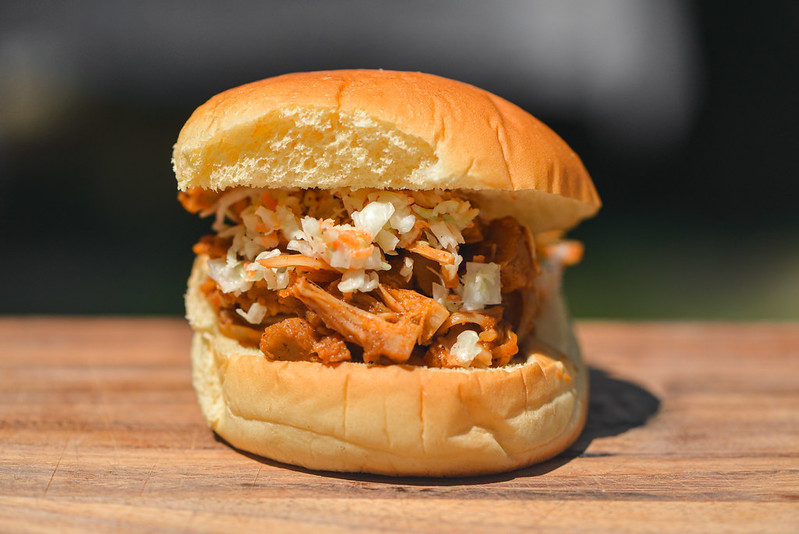 I went more standard with my barbecue for the vegetarian option. I picked up a bunch of cans of young jackfruit and gave the fruit a coating in a barbecue rub before smoking it. I then braised the jackfruit in barbecue sauce, and once tender, pulled it apart with a couple of forks. The end result was something that made no compromises in its barbecue flavor, even in the absence of meat. 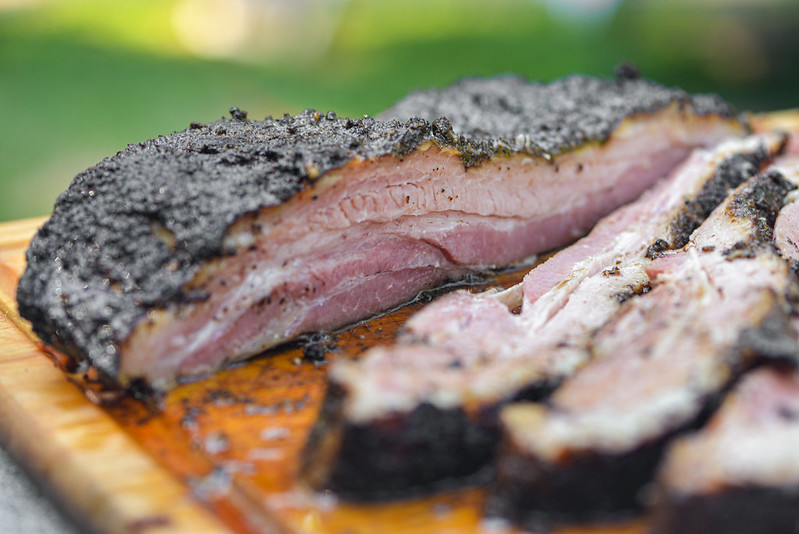 I wanted to do a pastrami bacon, but really what I ended up with was more of a pastrami pork belly. For bacon I would have smoked it for less time, cooled it, and sliced, but I cooked this cured pork belly fully until the fat was melty and luscious. I then sliced and served. It had all the great peppery, salty, and earthy pastrami taste, just with a lighter flavored meat. 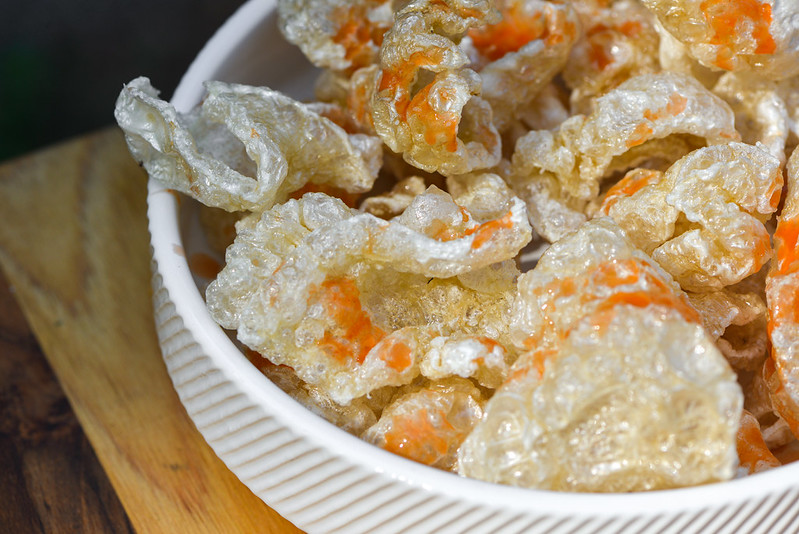 I also made some regular bacon which wasn't served at Carne-val, but all the pork belly I bought left me with a ton of pork skin. Instead of tossing it, I tried my hand at making chicharrones, which was quite a process. It started with simmering the pork skin in water for a couple hours, cooling it in the fridge, and then scrapping away the excess fat. I then dehydrated the skin in the oven at a very low temperature for eight hours. Next I fried it up, and those now tiny pieces of skin expanded and puffed up beautifully. There were some pieces that had harder bits that I need to learn how to avoid, but for a first attempt, I was impressed I pulled this off at all. 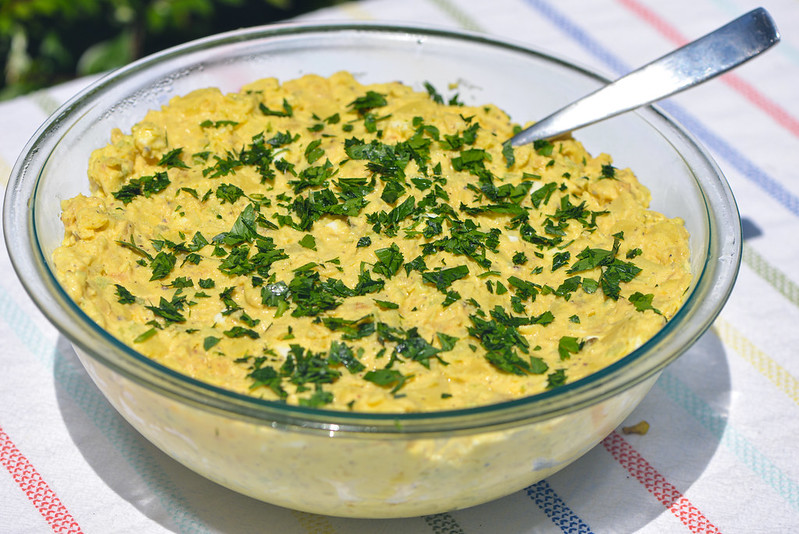 Moving on to the sides, I made this giant bowl of honey-mustard potato salad, which tasted incredible. I also made a batch of jalapeño-cheddar cornbread, which I forgot to photograph, but it was equally delicious. 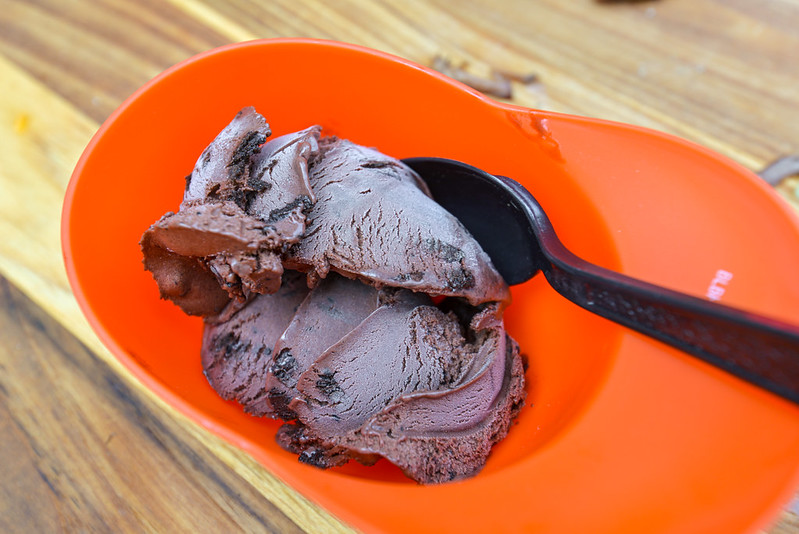 I also busted out the ice cream maker, which I do less and less often these days. I churned up a batch of mint chip ice cream, which never froze all the way—maybe a little too much alcohol from the extract was to blame. Then there was this exemplary smooth and creamy dark chocolate cookies and cream ice cream that combined dark chocolate ice cream with dark chocolate Oreos, a combo I knew would find a sweet spot in my heart. 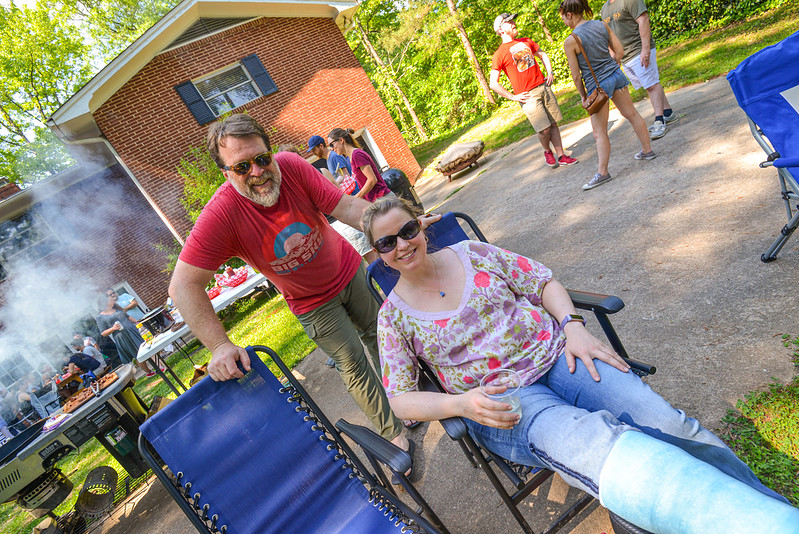 The food is only half the equation of any Meatwave, but for Carne-val, I feel like the guests are even more important. That's because I go beyond the normal mailing list and invite all my neighbors, which always results in the most well attended cookout of the year with more people meeting new folks than usual. We start the roll call this year with a special shout out to Mary, who made it to the backyard despite a broken ankle. And she was skillfully delivered up the steep and long driveway by her man Josh. 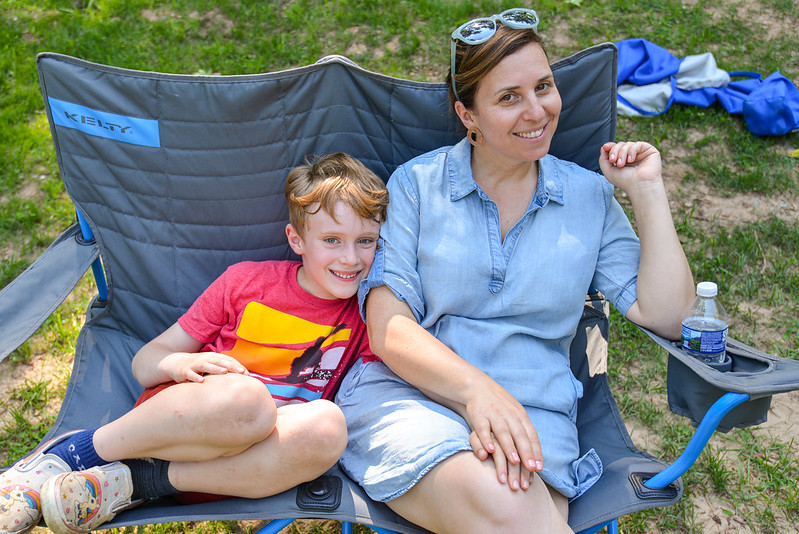 It's always a party when Benji is around. He's also adept at getting in more photos than anyone else, so you see him here with mommy Jenny, but he's going to pop-up again and again before this post is over. 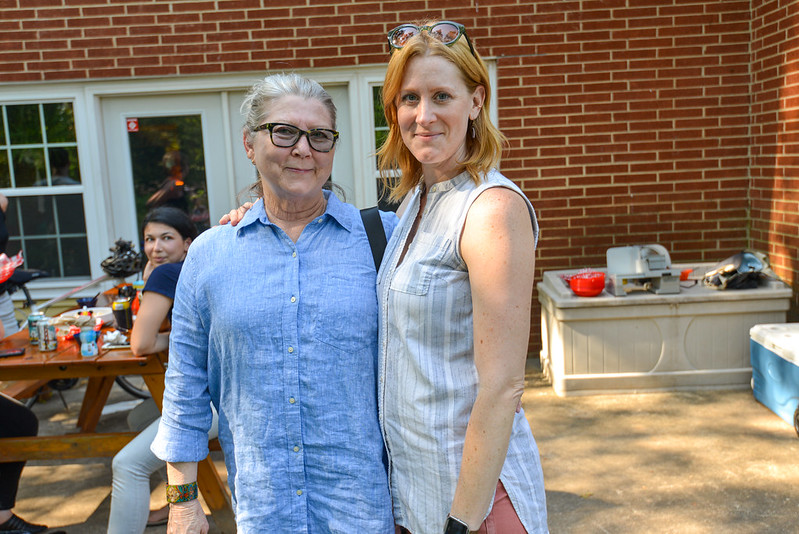 Next we have Lindsey, who brought her Momma to experience her first Meatwave. I think it's pretty safe to say she was left impressed because as she was on her way out, she asked if she could bring be back to Arkansas with her. 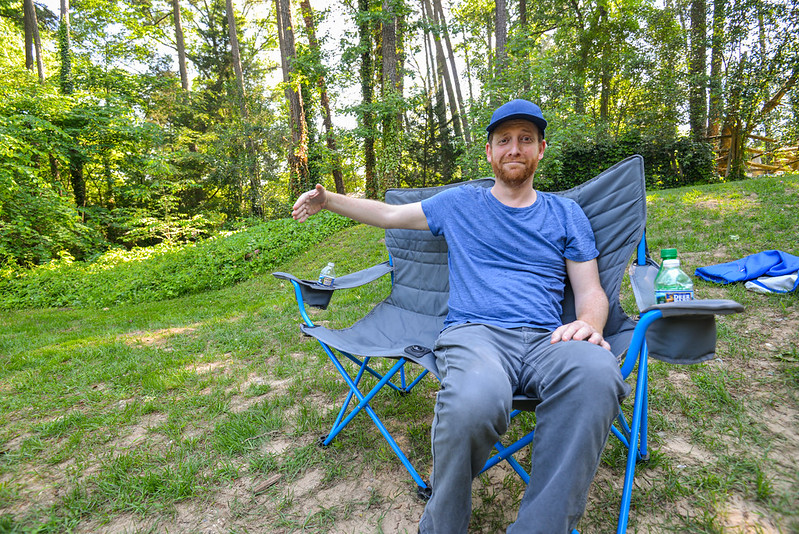 Here we have Gabe, missing the rest of his family. It's been a minute since his crew has made it out due to a new baby last summer, but with wife and kids out of town, he jumped right back into the Meatwave and said that their kid is old enough now that they should be able to start getting the entire clan back into attendance soon. 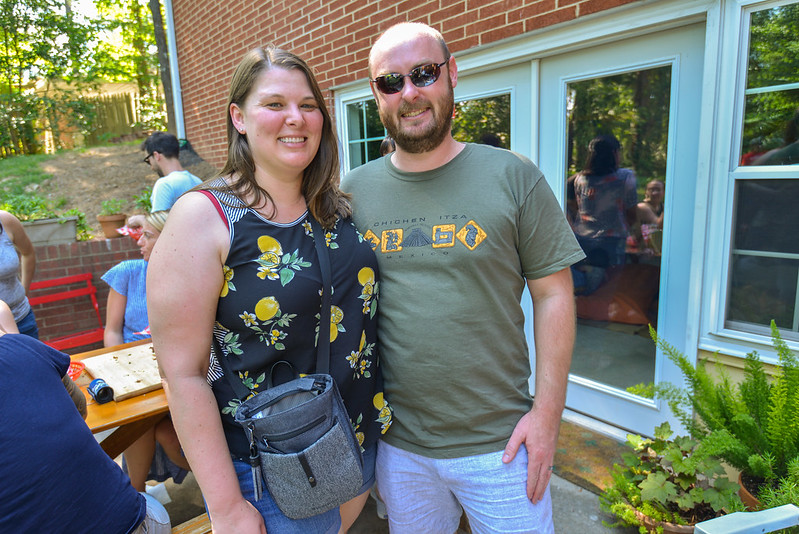 I think Ryan and Juliana are going for the best attendance record this year. That title has been held by Steve and Leslie for the past few years, but those two missed out on Carne-val, making Ryan and Juliana the only guests to be 3-for-3 in 2019, I think. 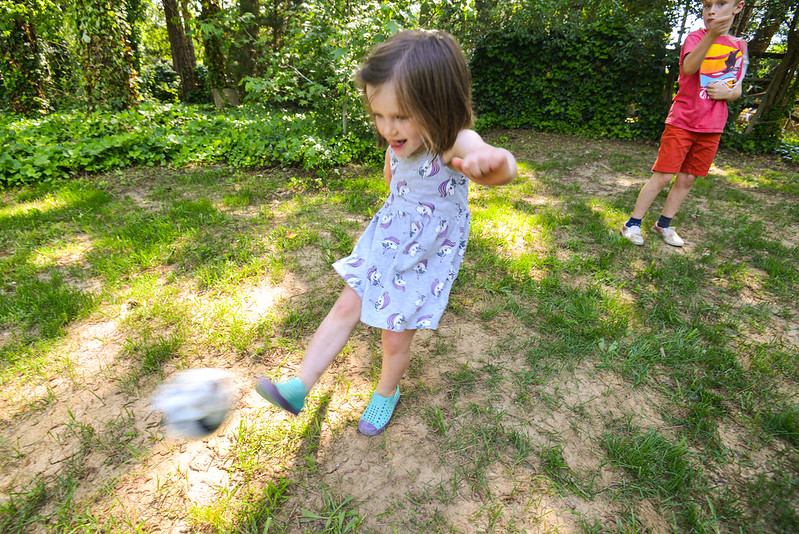 Our first Meatwave of the season was cold, the second one was wet and our backyard was a mud pit due to recent work done on the house, so it was nice to finally have the sun and some grass growing again. We're not back to normal yet, but that's no worry for Alice, who wanted to play some soccer. 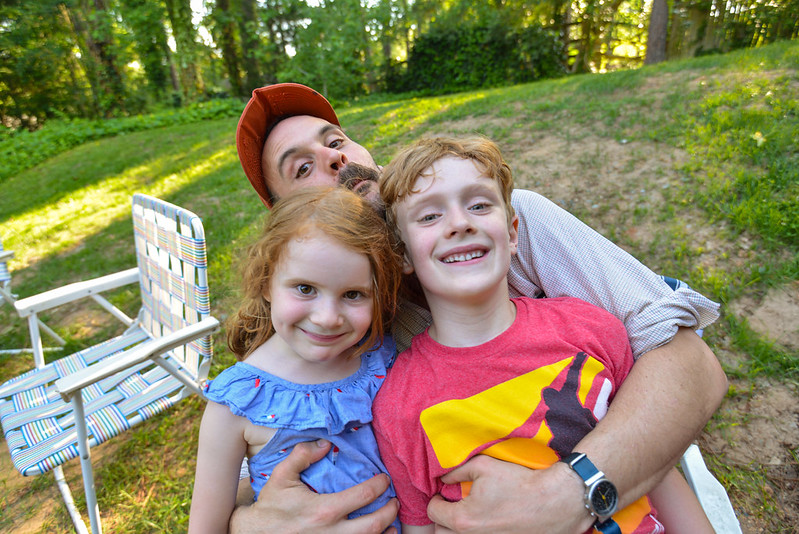 And now we circle back to Benji, whose getting some good hugs from Evan along with his sister Annie. This is only a small sampling of those who made it out—I didn't get an exact count of everyone who came, but it was in the 35-40 people range, with a lot of newcomers. That's really what Carne-val, and the Meatwave in general, is all about—getting together with old friends and making new ones. That fact that there's a ton of smoked meats in the process of doing that is really just an added bonus.