Franks for the Meat 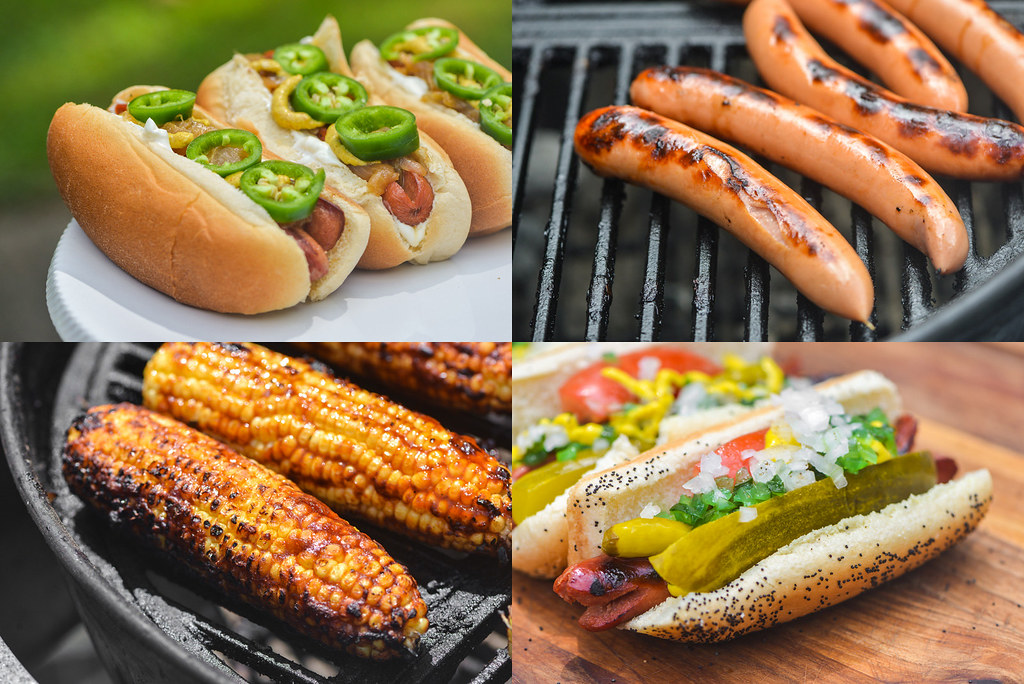 Between vacation and time in New York for family and work matters, I've really only been home a little over a week in the last month. This left missing my friends and the Meatwave, but also with very little time to actually put together any type of extensive menu if I wanted to host a cookout to bring the things I was longing for back into my life. When I've run into scenarios like this in the past, I always fall back on a simple hot dogs and hamburgers affair, which in the midst of my continual focus on new recipes, is actually a comfort and welcome change of pace. I was starting to go in that direction and then thought, why even do both burgers and franks, why not just focus on hot dogs alone? And that's how Franks for the Meat was born, but even when faced with only couple days to shop and prep, I still couldn't bring myself to serve hot dogs in the minimalist sense and ended up making five different variations on the theme that were inspired from around the world. 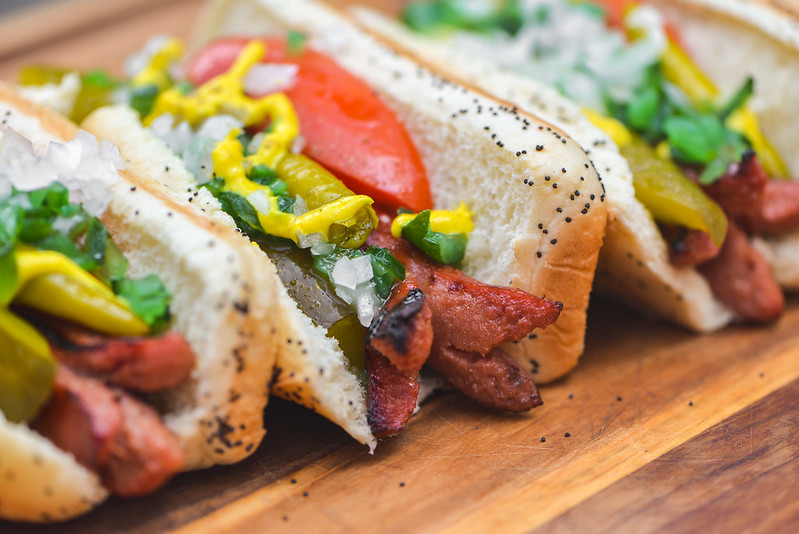 I've been wanting to serve up some Chicago char dogs for a long time, and this seemed to be the perfect timing and excuse. Prep and shopping was super easy because I just ordered a Chicago dog kit from Vienna Beef that included the required natural casing beef franks, poppy seed buns, sport peppers, neon green relish, mustard, and celery salt. All I needed to do was chop some onions, dill pickles, and tomatoes and I was able to assemble the entire Chicago dog experience, which many of my guests were super jazzed about. 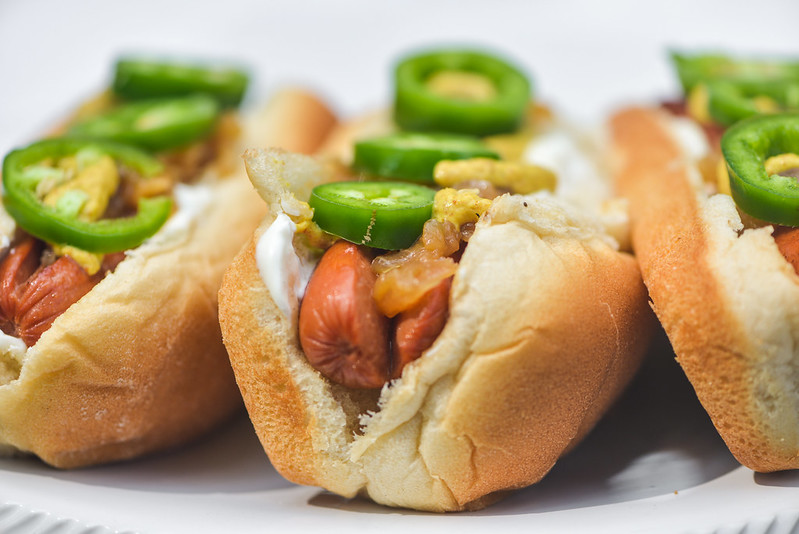 Next up were Seattle dogs, whose main requirement was warm cream cheese. To that I added brown mustard, grilled onions, and fresh jalapeño slices. My friend Evan had some fond memories of Seattle dogs from the past, and these seemed to fulfill a longing. Although he did mention that he had never experienced the jalapeños before, but I thought they added a well paired kick to the cooling cream cheese and sweet onions. 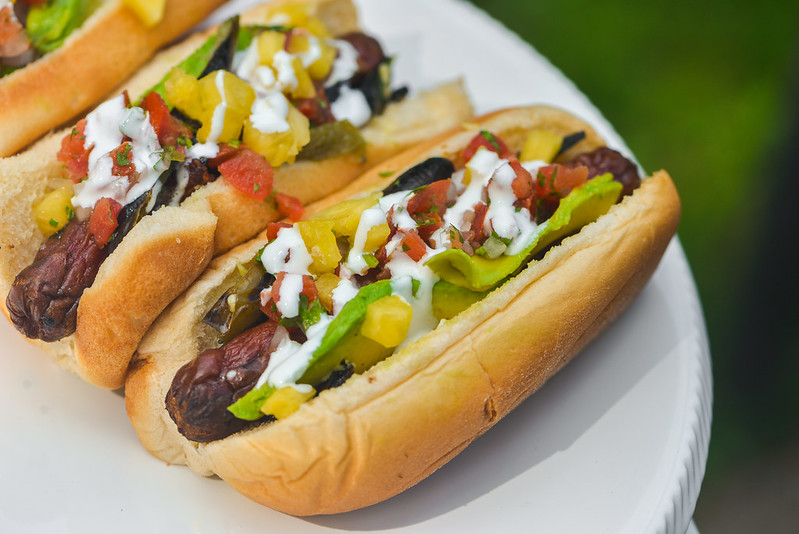 Tijuana dogs were a new experience for everyone, including me. I've been familiar with danger dogs for awhile—bacon-wrapped and deep fried hot dogs—but Tijuana dogs takes things a little further with toppings like pico de gallo, grilled jalapeños, fresh avocado, and crema. I also added some diced pineapple into the mix, which provided a nice sweetness against the spicy jalapeño. 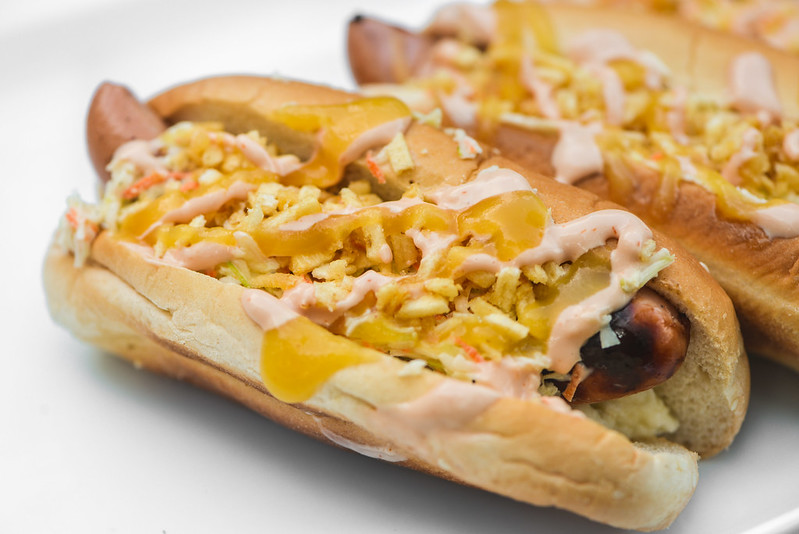 One of the main reasons I wasn't home for so long was due to an almost two week stint in Colombia for vacation. While there was a lot of good eating to be had there, one of my favorite things was grabbing a late night hot dog that was nestled in a bed of melted queso blanco and then topped with slaw, potato sticks, and your choice of a variety of salsas. I recreated that perro caliente experience for Meatwavers here, which I personally think is the best gift I brought back from the trip. 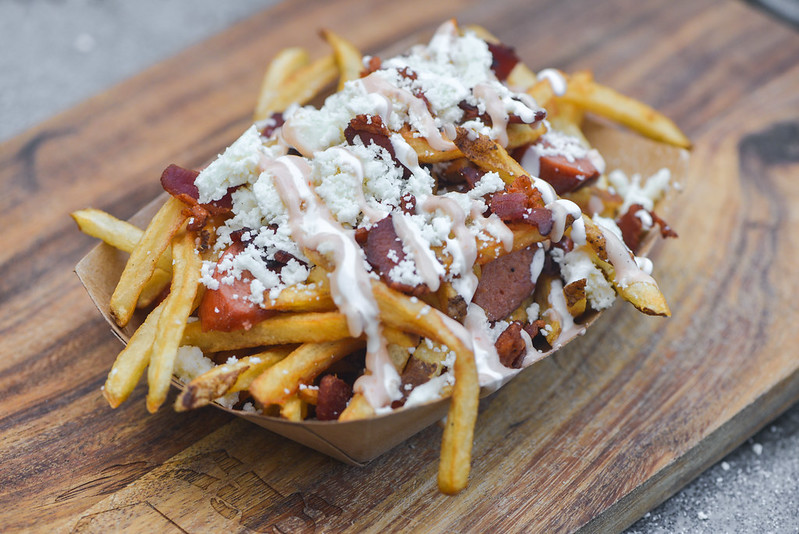 Also in Colombia, I had an overtopped plate of salchipapas, which served as the influence here. Salchipapas is most commonly just fries with sliced hot dogs, but this boat of fries also included bacon, grated cheese, and a couple different sauces, which I think all just enhanced the overall salchipapas experience. 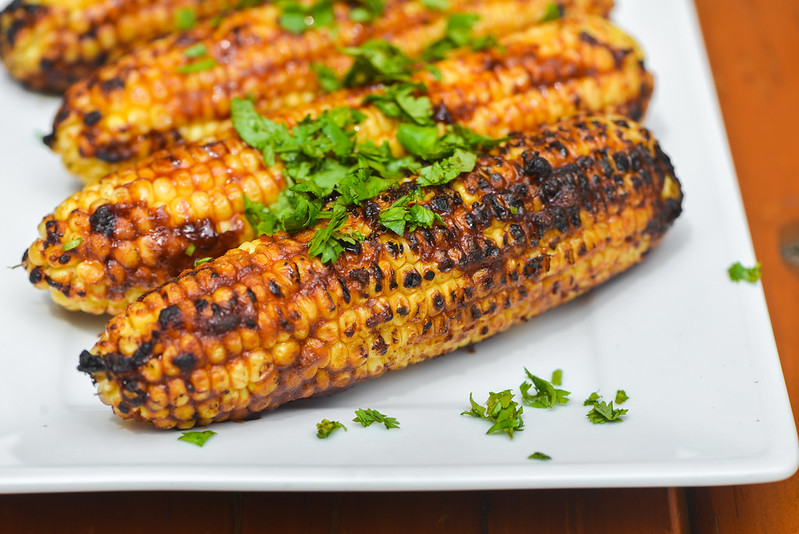 I didn't really do much planning for sides, but ended up picking up a bunch of ears of corn since it was in season, inexpensive, and quick to prepare. I did some of those ears up in Taiwanese fashion, which just meant they were brushed with a soy-chili sauce that gave the sweet corn a great savory and slightly spicy flavor. 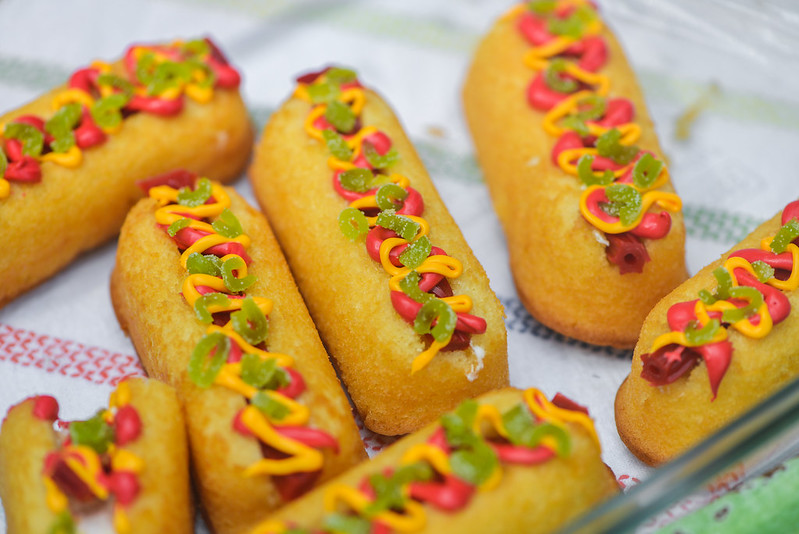 Juliana really got into the hot dog spirit by bringing a tray of Twinkie hot dogs. I can't remember the last time I had a Twinkie, but this was the best way to get them back into my life, and they were made all the better with the variety of gummy topping. 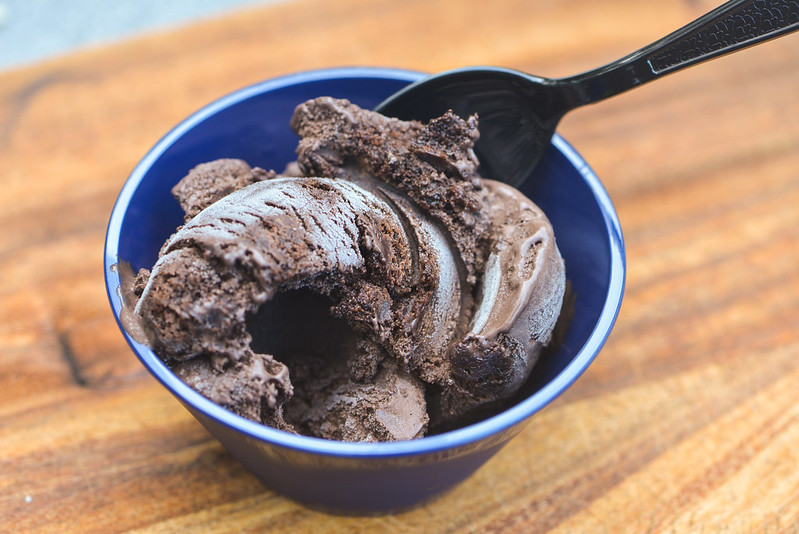 I used to use the Meatwave as an excuse to try out new ice cream recipes all the time, but I've let that fall to the wayside in recent years. I figured since I didn't have all that much prep to do, it was a good chance to get back into the ice cream spirit and I made a dark chocolate ice cream with fudge brownies that was spectacular and reignited my desire to keep on churning out new creations. 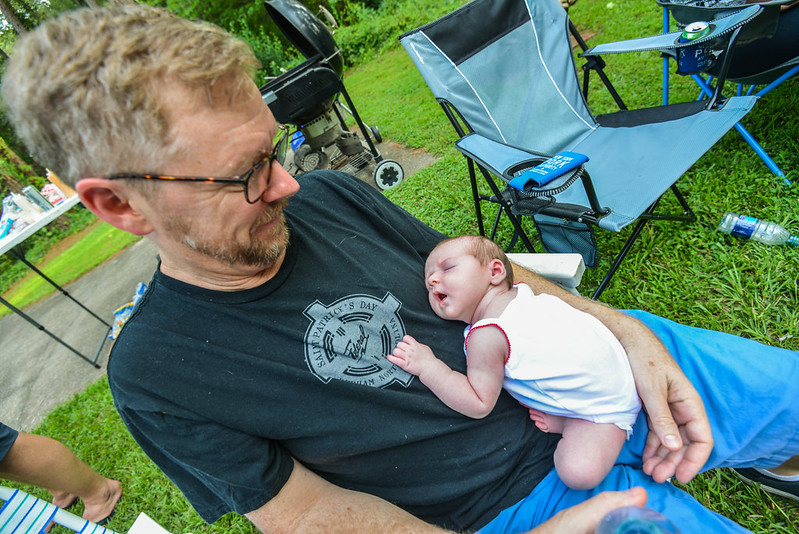 During the least Meatwave recap, I mentioned that Leslie and Steve would bring a new Meatwaver into the world by the time next one came around, although I doubted she'd be up to task of attending yet. Well, not only did we welcome Brooks into the world, she didn't miss a beat and showed up just over a week after being born. I think she now wins for youngest Meatwaver ever, and Leslie and Steve kept up their perfect attendance record. 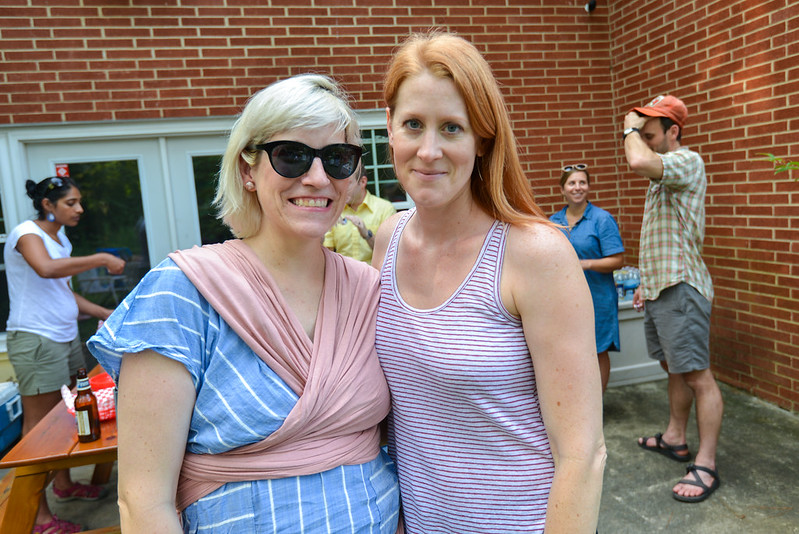 Here's the happy mama along with Lindsey. We were also welcoming Lindsey back this week—she recently returned from spending some time working in Portland, and it was great to have her back! 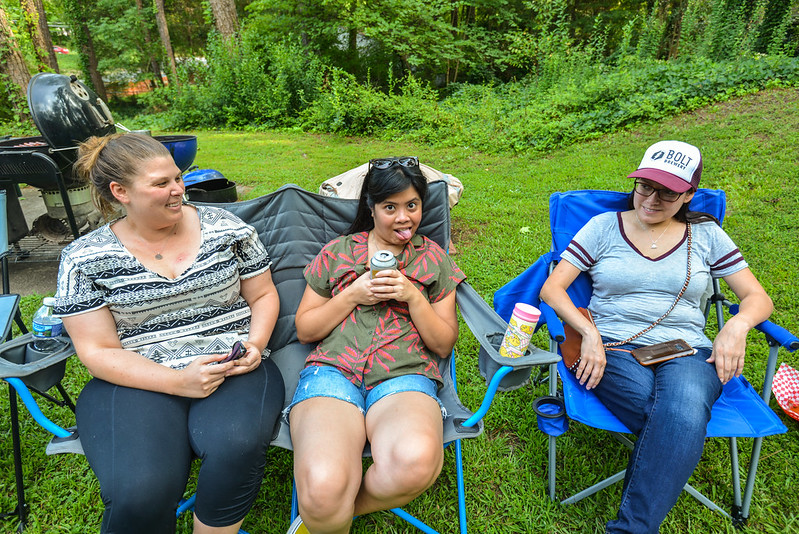 Hard to decide what Juliana and Mel are really thinking of Kris here, but it's all part of the Meatwave fun. 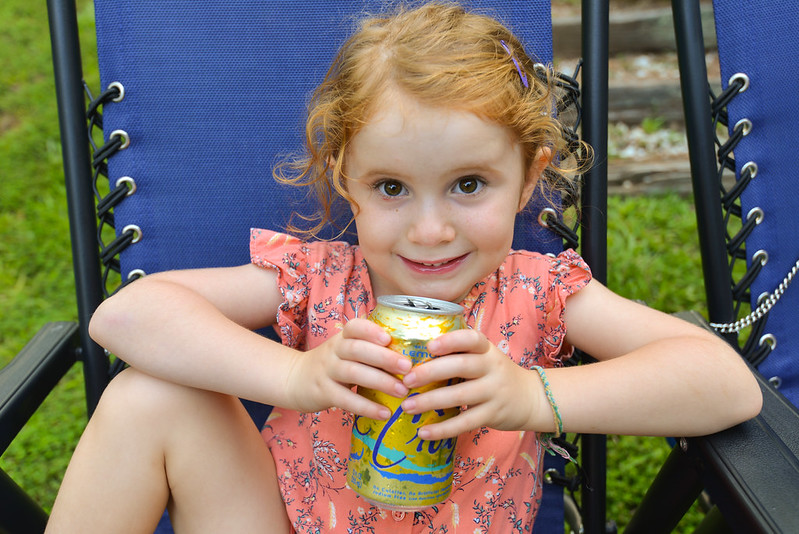 Annabel is taking a break here from playing with fun noodles to cool off with a La Croix. 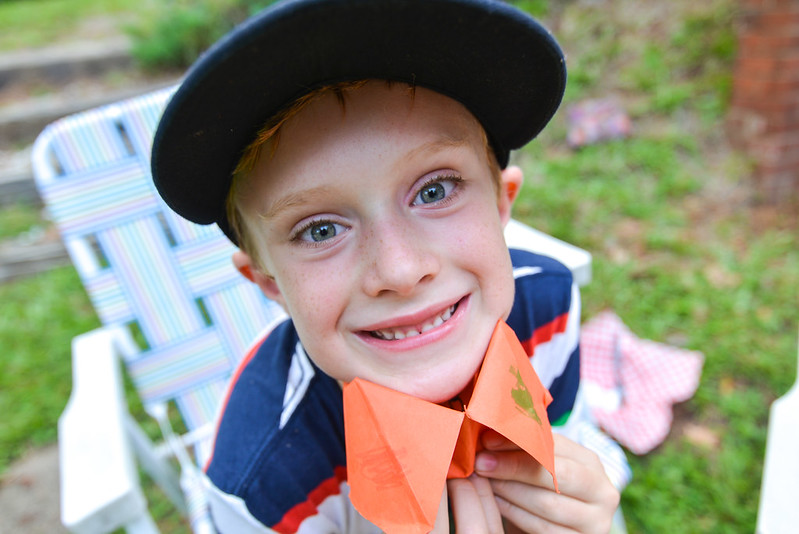 And brother Benji is looking as good as ever, showing off his fortune teller that he was entertaining guests with throughout the day. 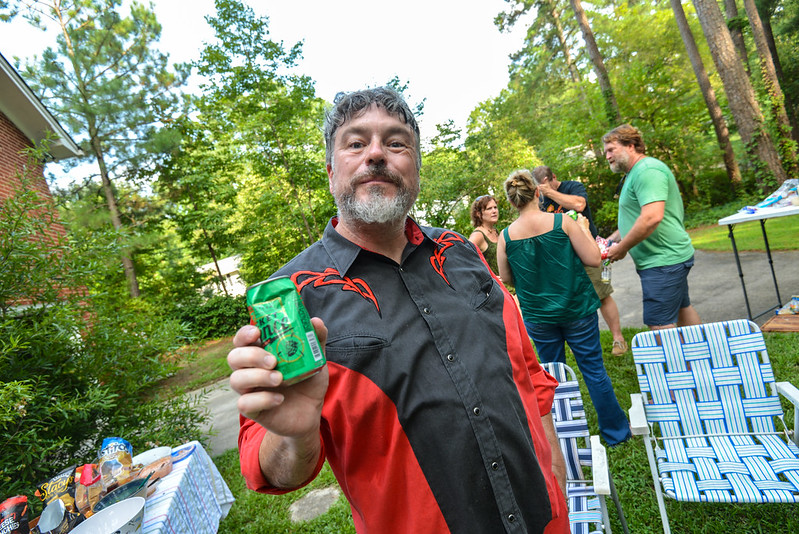 I believe this was Brian's first ever Meatwave, and we were excited he was able join. He also came in tow with a number of homemade pickles and goodies for sharing—he's already well into the spirit of the Meatwave! 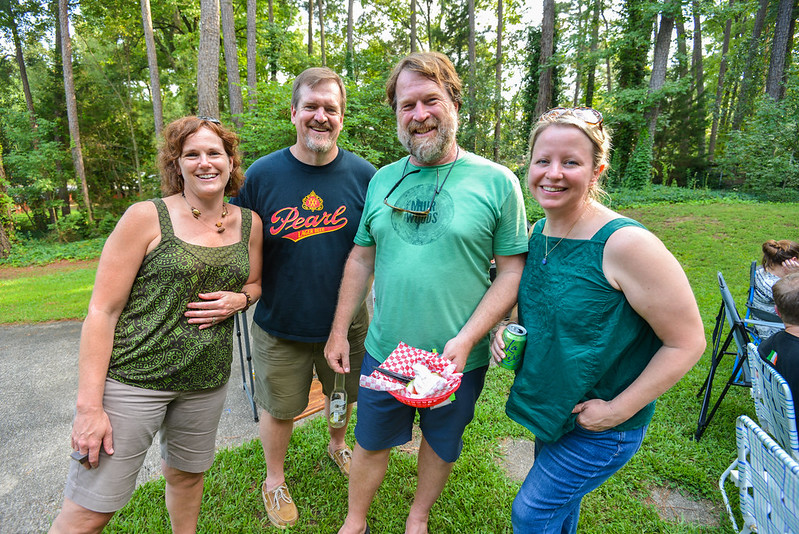 We have a fine looking bunch of Meatwave regulars here—Sue, Chris, Josh, and Mary—taking a break between the many rounds of hot dogs. 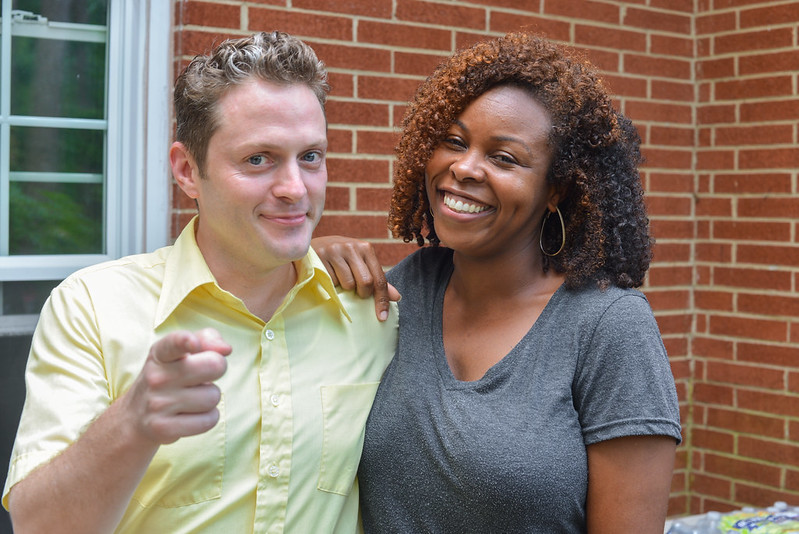 Next up we have Patrick and Shola, always having a good time. 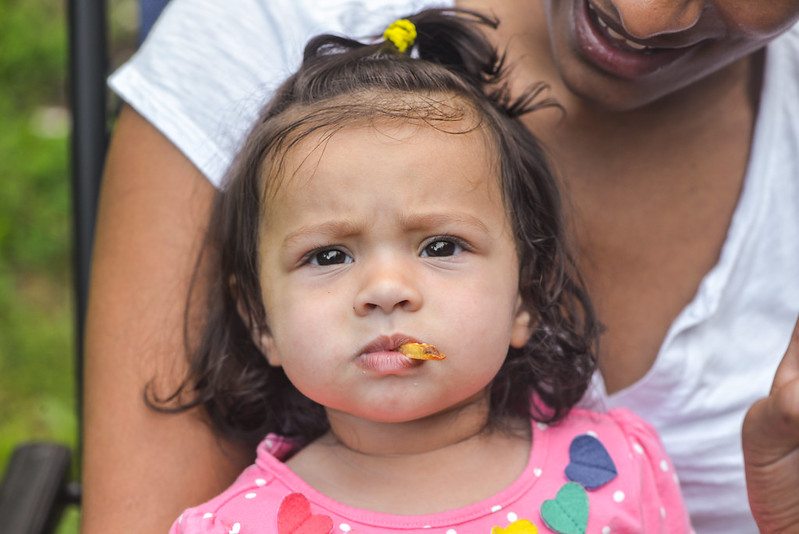 And last, but not least, I'm leaving you with Anika, who has a french fry eating face that Kris can totally relate to.