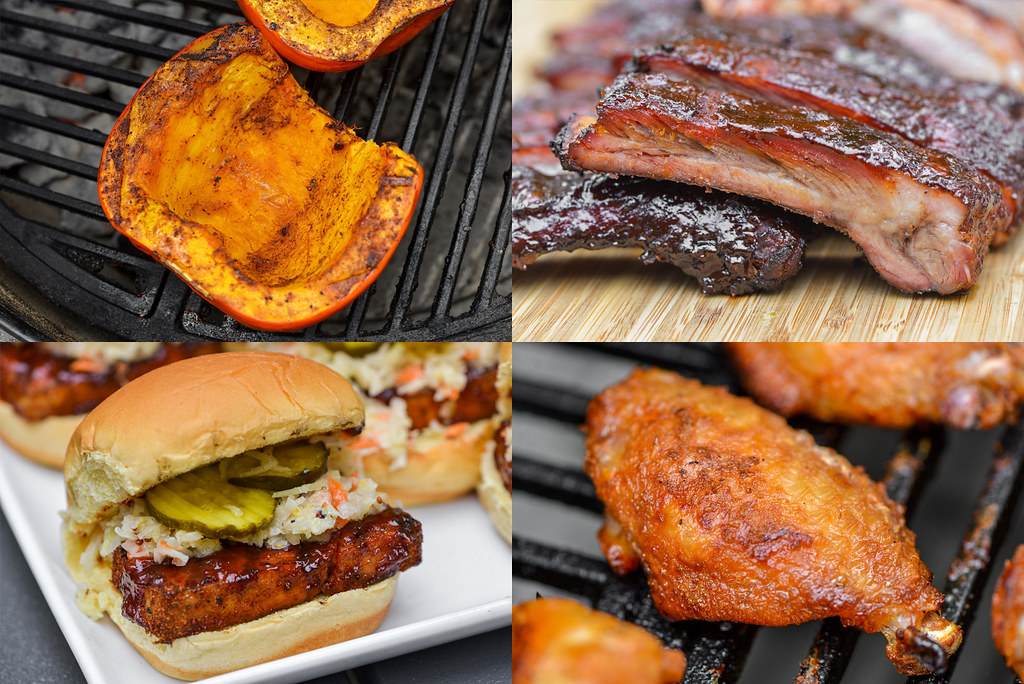 In the New York days of The Meatwave, I would host a cookout every other week in the warm months, which added up to nine or ten total events a year. About ten years in, that cadence began to wear on me and I scaled back to five or six Meatwaves max a year, which afforded a month or so between each one. Weather and travel forced me to reconfigure my Meatwave schedule at the end of 2022, which had two barbecues bumping up close together like in the old days, and while I could have pushed the season finale back a week or two, I really wanted this one to fall on Halloween weekend because I had a savory-sweet menu idea that fit the holiday, plus the partying spirit would be perfect to keep the festivities going on into the night. I ended up pulling off the amazing Happy Meat-o-ween, but damn, I was so tired the next day I don't know how I used to survive that more packed schedule. 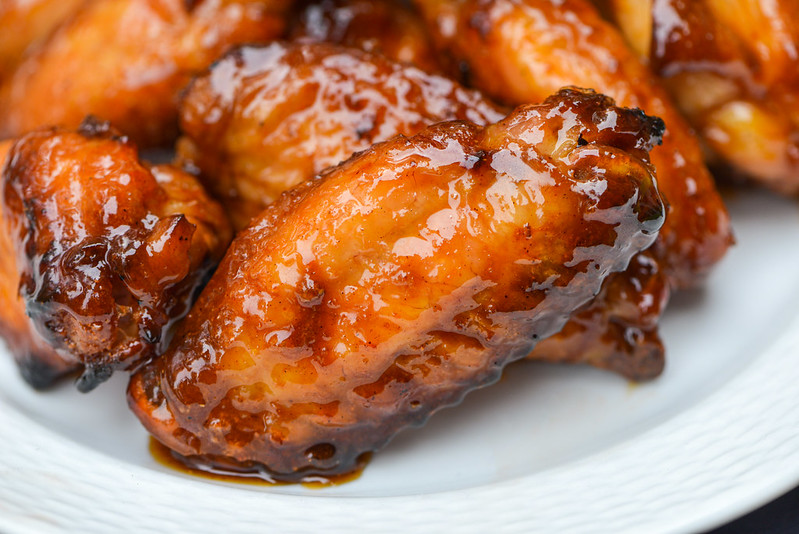 Halloween had me focusing mainly on the sweet, but I started the day off with the only outlier of spicy, but also thematically perfect, ghost pepper wings. When you normally hear of a dish including ghost peppers, you may think it's going to be so incredibly hot that it verges on inedible. I didn't want cook a plate of food no one would touch though, so I crafted these with a far amount of sugar too and that did the trick to make them super hot, but also totally enjoyable. 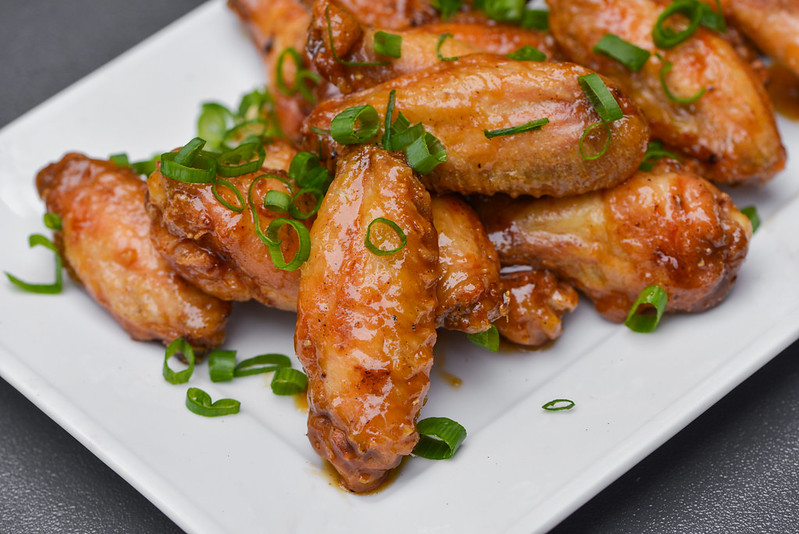 I knew the ghost pepper wings would have a somewhat limited audience, so I made a larger platter of these honey-miso wings. 2022 could be seen as the year I started to put miso in everything, and to be frank, I'm not done with that since I'm still in a love affair with how this incredibly savory Japanese paste makes everything it touches taste incredible. The miso here found a good contrast with the honey and then got even more depth by the pretty standard players of garlic, ginger, mirin, soy sauce, and sesame oil. 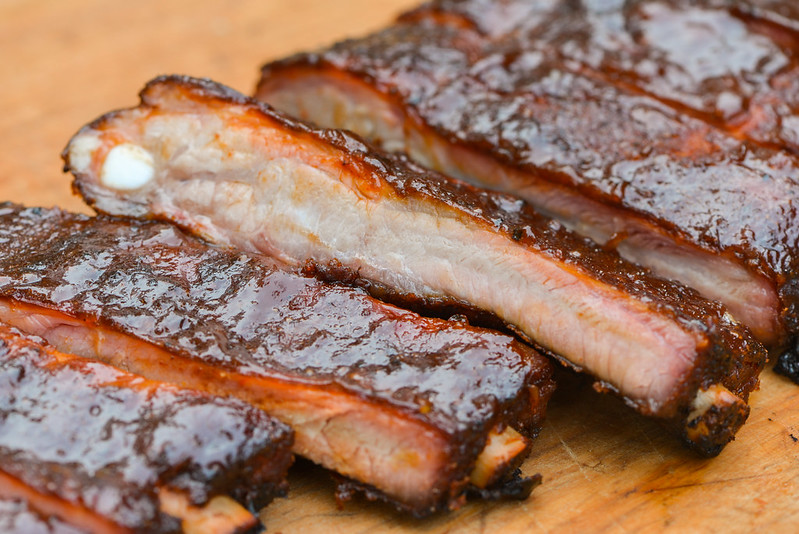 Longtime readers of this site probably already know that I'm a fan of spicy-sweet barbecue, so it felt wrong to me to craft a recipe that really centered the sugars with these maple barbecue ribs. Even though a hearty dose of maple syrup in the sauce gave it a distinct sweetness, they end product still had a good savory depth and layers of flavor that didn't make the ribs taste like sugar alone, which made it easy for me to keep going back for more helpings throughout the day. 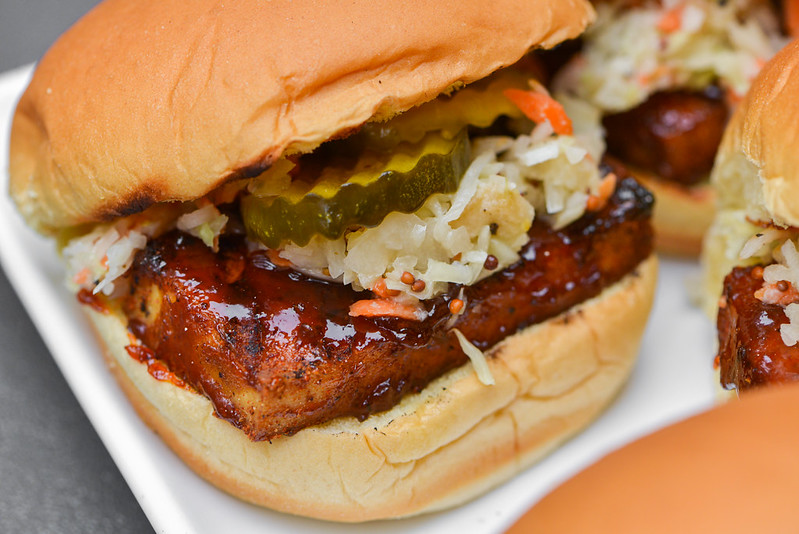 Not wanting the non-meat eaters to miss out on the rub-sauce combo that made those ribs so good, I used both on tofu to construct these maple barbecue tofu sandwiches. This was probably the better of the two incarnations because the sandwich allowed for the important additions of a honey-Dijon apple coleslaw and pickles, which added more texture and contrast to the sweet barbecue flavor. 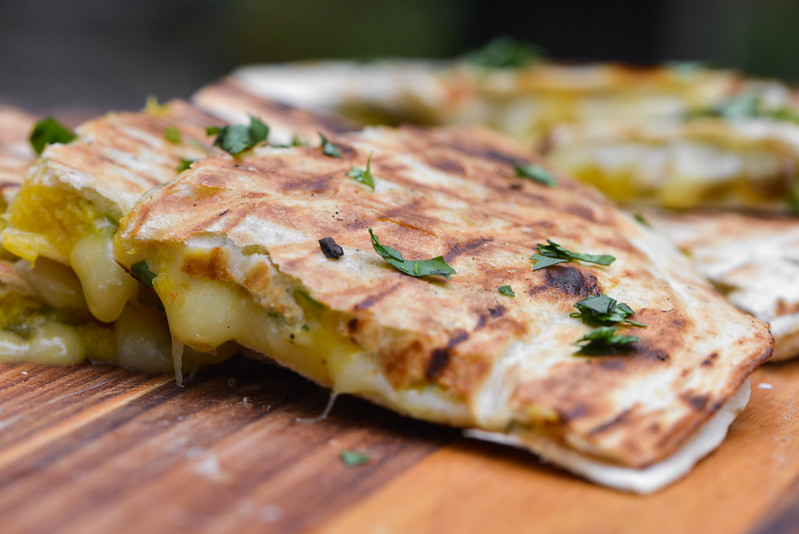 While out doing the food shopping for this cookout, the grocery had a plethora of sugar pumpkins available, and I never get to use these much at all and they fit so well into the theme, I picked up a bunch and turned them into grilled pumpkin quesadillas. After roasting halved pumpkins on the grill, I scooped out the flesh and mashed it with sour cream, cilantro, and scallions. That mixture was then sandwiched between two flour tortillas along with grated pepper jack and roasted Anaheim peppers before going back on the grill to toast and melt the cheese. The end result was another savory-sweet dish that felt quite at home in the extended line-up. 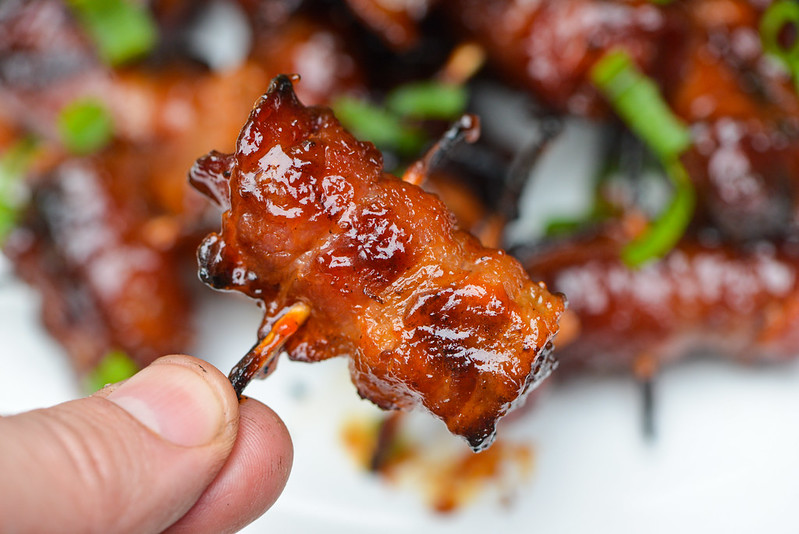 The last thing to come off the grill was probably the thing you may have expected to be the initial course, but I knew that these candied bacon-wrapped little smokies would disappear even if everyone was already stuffed, so I saved them for the end. They were pretty irresistible with a great smokiness and saltiness that was tempered by both a brown sugar crust and a brushing of barbecue sauce. 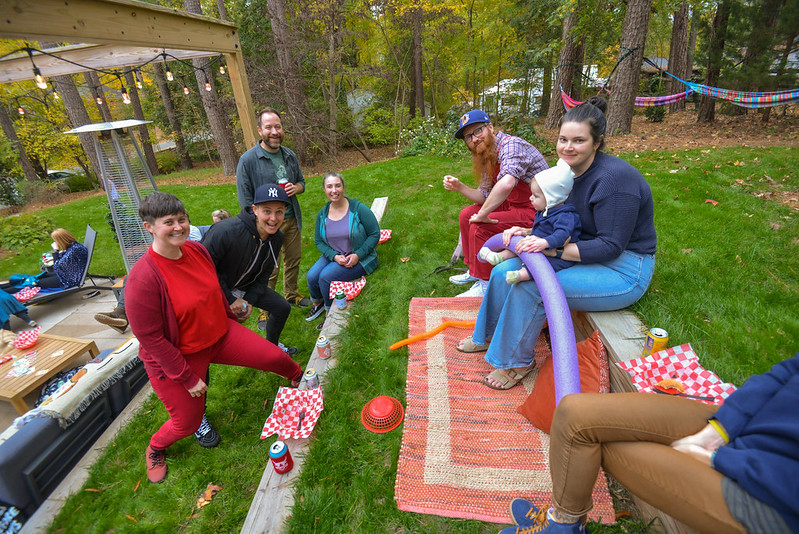 One thing that was different when the Meatwaves were closer together was fewer folks showed up to each, which was an original design feature—there's so many, just come whenever it's convenient for you. My last Meatwave was well attended, so I thought this next one just two weeks later would have a fairly sparse crowd, but it ended up being one of the largest ones since before Covid. I won't call out everyone's name, but I wanted to remember all the amazing folks who came out, including a couple new Meatwaves in this group, Adam and Cat. 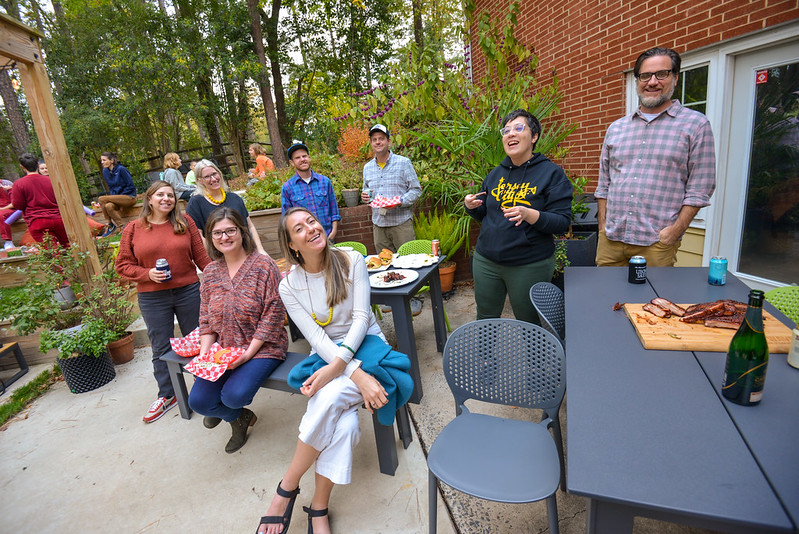 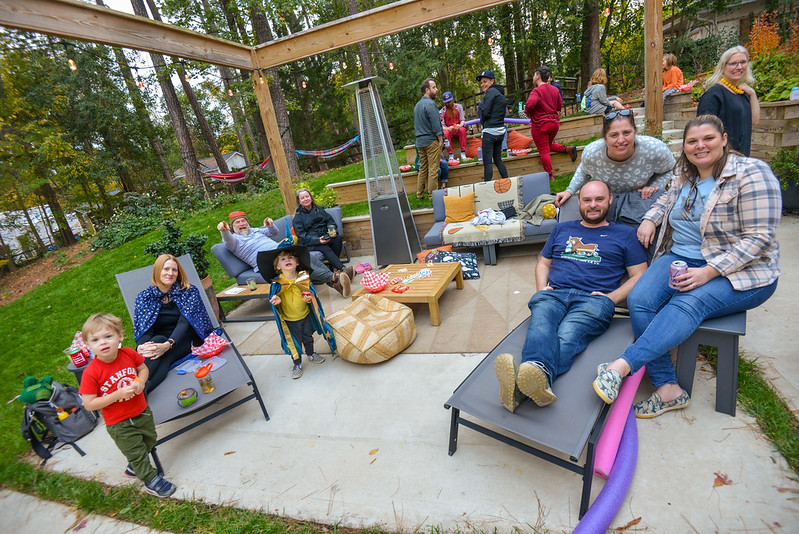 And a final shot with people already in formation for what the evening would bring next... 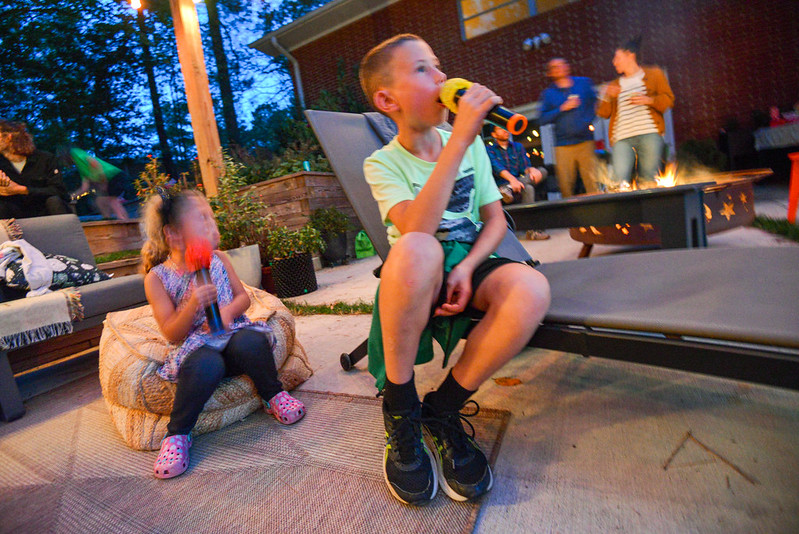 Karaoke! Here's Cy killing it at the start of the singing session that went a few hours into the night. We also had a campfire going with s'mores fodder to keep people warm and even more full with sweets. Even though I needed a full recovery day after this event, it was definitely a highlight event of The Meatwave season, which sadly has come to a close for 2022, but I couldn't have asked for a better day to put a proper cap on a year that represented a return to form after a couple summers of scaled back events due the pandemic. 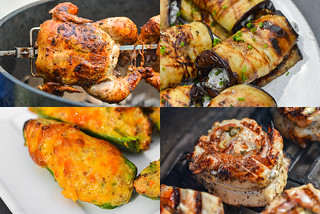