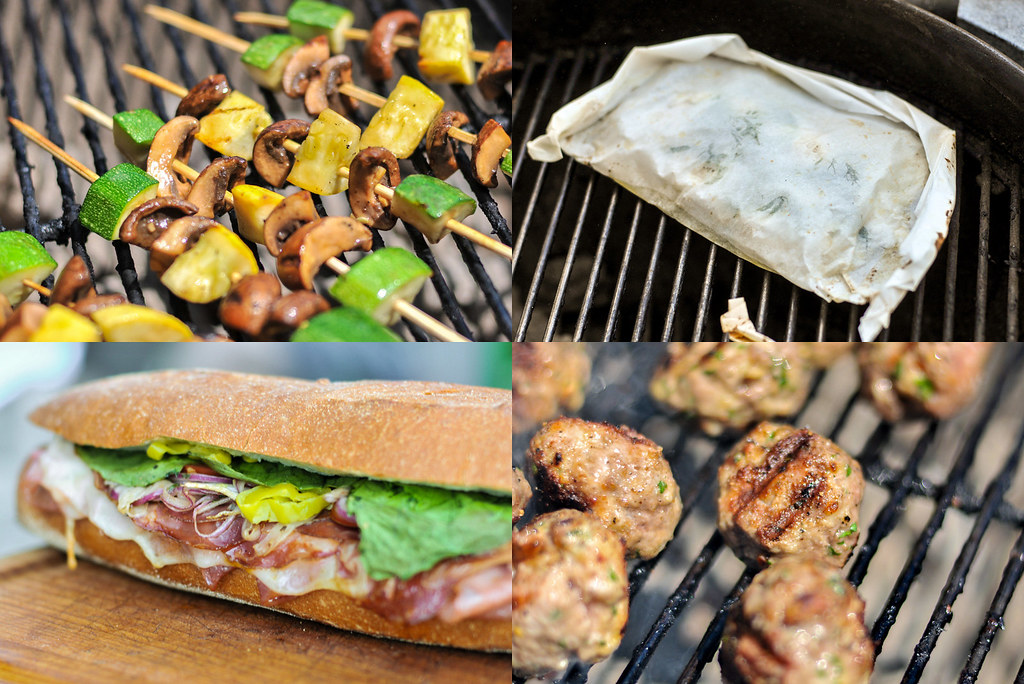 Three years ago, the Meat-a-thon challenged the Meatwave with two full days worth of grilling. Then it was back last with the exciting sequel, Meat-a-thon 2: Electric Burgerloo, where we took burgers to exciting new places. This year was the highly anticipated conclusion of the Meat-a-than trilogy, where many Meatwave firsts were celebrated at Meat-a-thon 3: Rise of the Meatchine*.

*I'd like to note that I was in favor in calling it Meat-a-thon 3: The Search for Cock, but some dissenting voices persuded me otherwise. 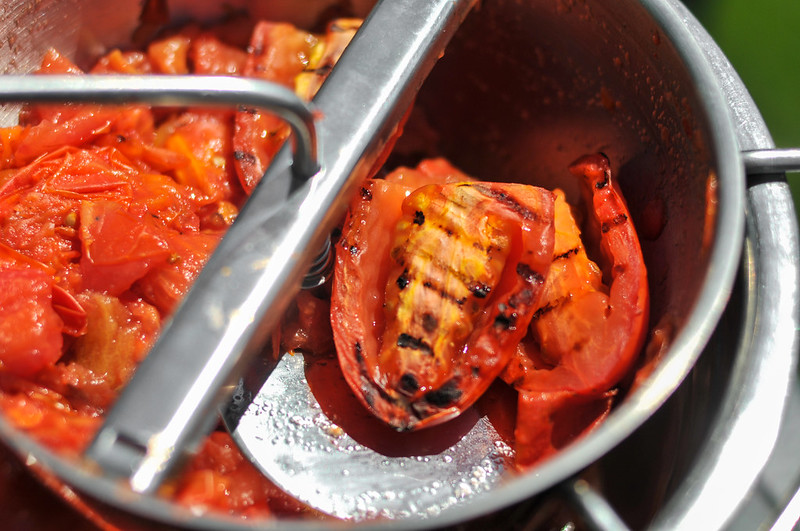 This Meat-a-thon treaded an Italian trail thanks to a suggestion by my Serious Eats editor Kenji. He had the idea for an all grilled Sunday gravy that he bestowed onto me to make awesome. Honestly, I hadn't heard of a Sunday gravy before, but a little research was all that was needed to let me know this sauce is a true meastravaganza, making it perfect for the Meatwave.

I started it with grilling six pounds of Roma tomatoes until they slightly dried out and started to char. They were then sent through a food mill and became a nice pulpy liquid. 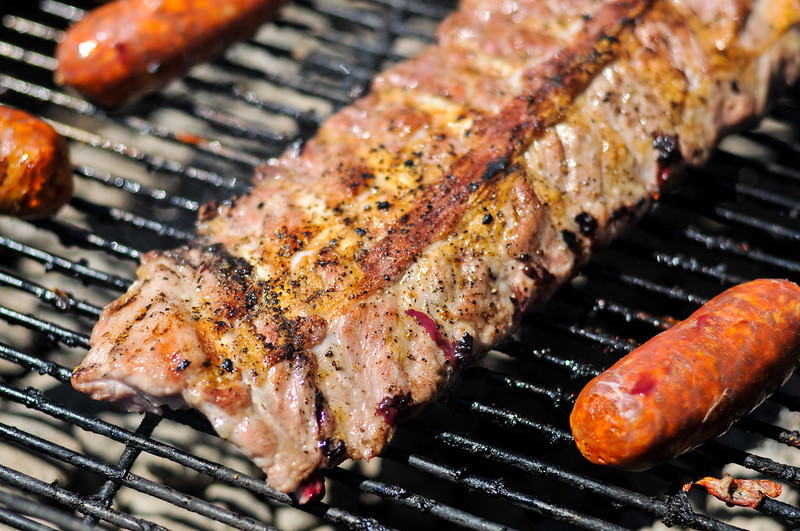 Next both hot Italian links and a rack of baby back ribs were grilled until just browned. Once the sauce was going (I originally started it on the grill, but switched to the stove when the fire started to die out), these meats were added to the pot and the whole thing was let to simmer for about three hours. 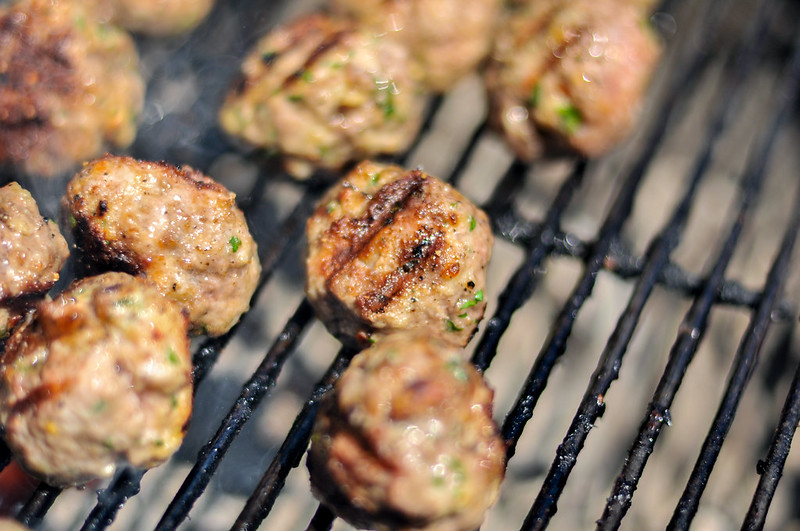 At this point I grilled up two more additional meats. The first were these Italian-style meatballs, laden with Parmesan and Pecorino Romano. 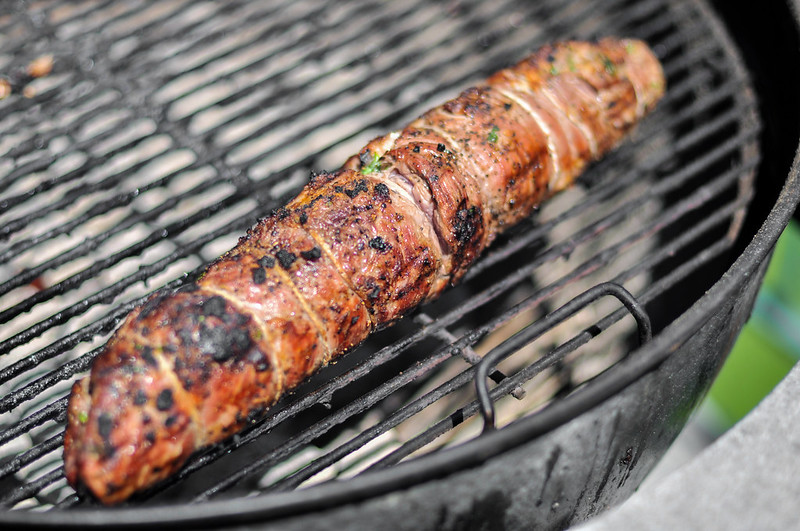 The second was a beef braciole. For this I butterflied a piece of flank steak, then stuffed it with a breadcrumb, parsley, cheese, and prosciutto mixture. It was then tied up and grilled. Once both the meatballs and beef were nicely browned, they were added to sauce which was now nicely thickened. 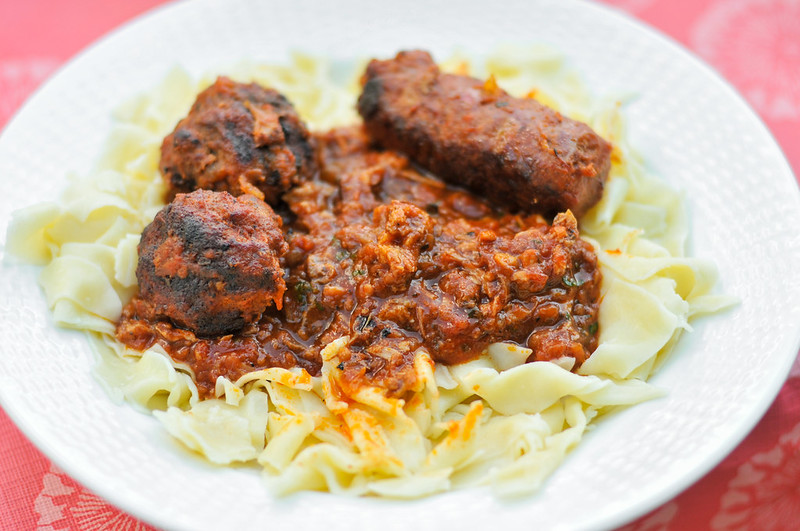 The end result was this, a rich and fully flavored meat sauce. The meats were taken out and eaten separately—except for the ribs, which fell apart and became part of the sauce—and the sauce was ladled over homemade tagliatelle. 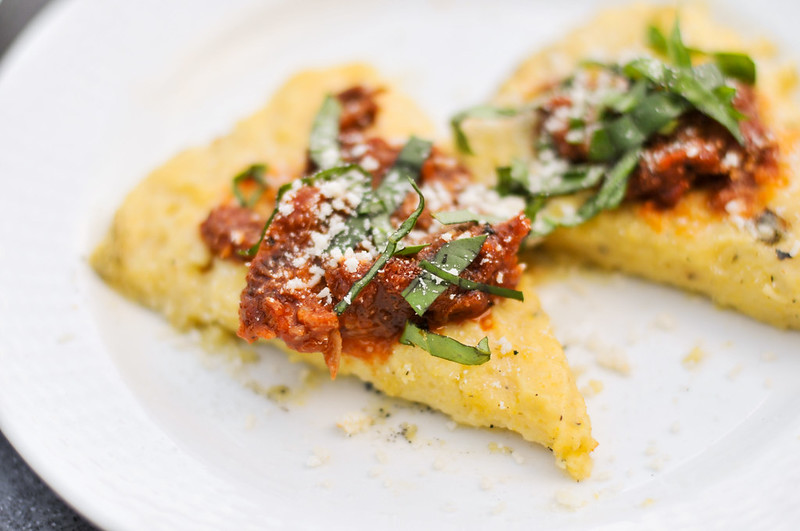 As a side to that, I made a batch of polenta the night before and let it set in the fridge. Being a newbie at polenta, I made a misstep here of using too much liquid, making the polenta not quite firm enough to develop nice grill marks, but that didn't matter much because it still tasted awesome. 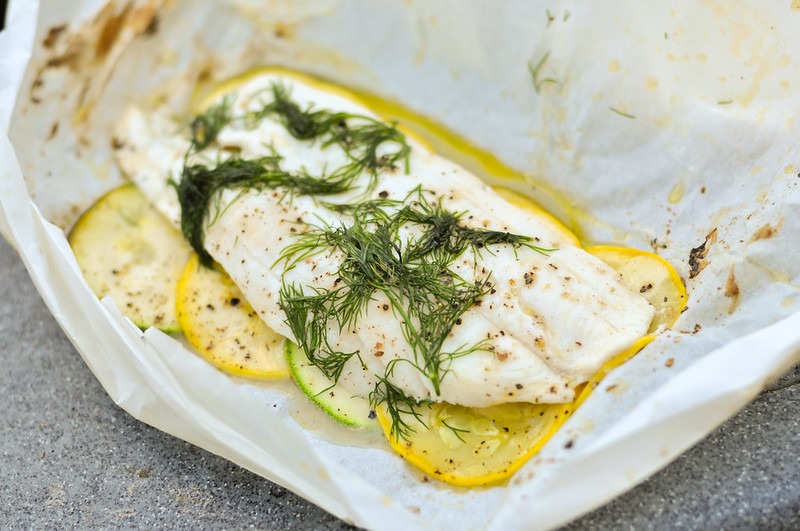 On the lighter side, I also tried my hand at fish cooked in parchment paper. I've heard amazing things about this French method of gently steaming fish, and what I heard was right. The delicate sole was lightly embedded with the flavors of lemon, fennel, and dill that were also in the pouch. It was mild and refreshing after all that heavy pasta and meats. 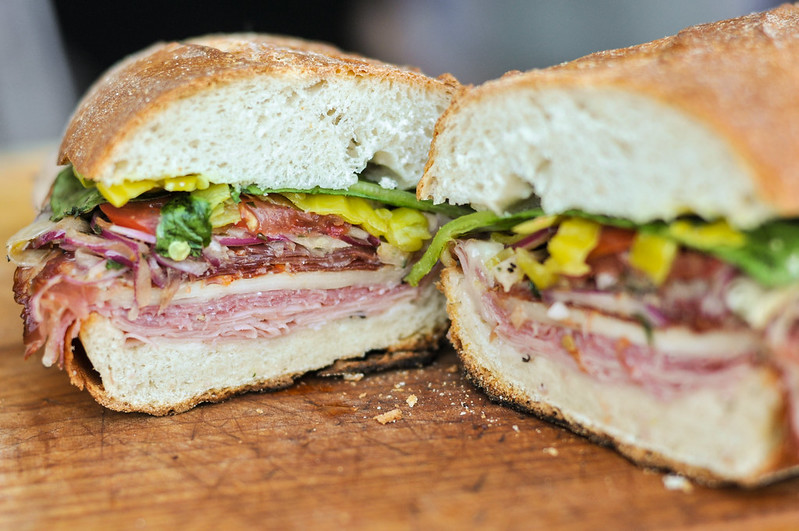 Of course, I had to add more thing to the menu and it was massive—a giant Italian party panini. Genoa salami, mortadella, hot capicola, provolone, and marinated veggies were piled high onto an 1 1/2ft Italian loaf. Then it went over a medium-low fire and weighted down with a few hot bricks to press it. The bread only slightly squashed, but it crisped beautifully, making a tremendous sandwich. 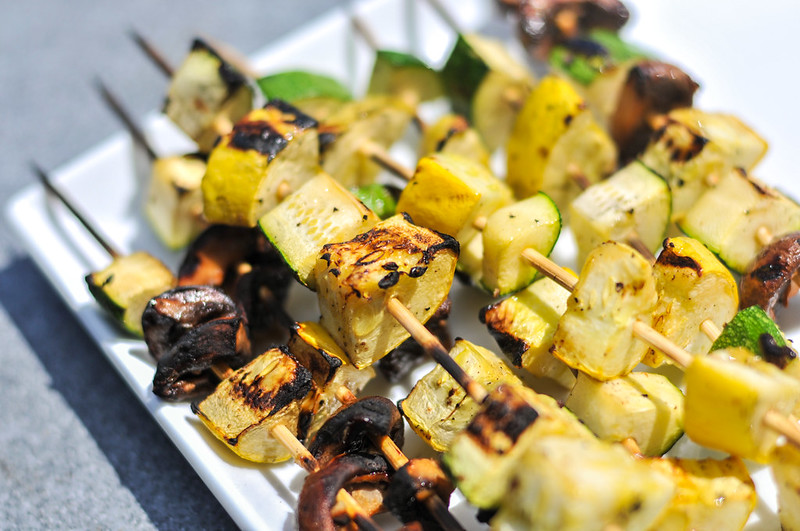 I had some extra veggies left over from the fish pouches, which my wife turned into marinated mushroom skewers that awaited guests as they arrived. 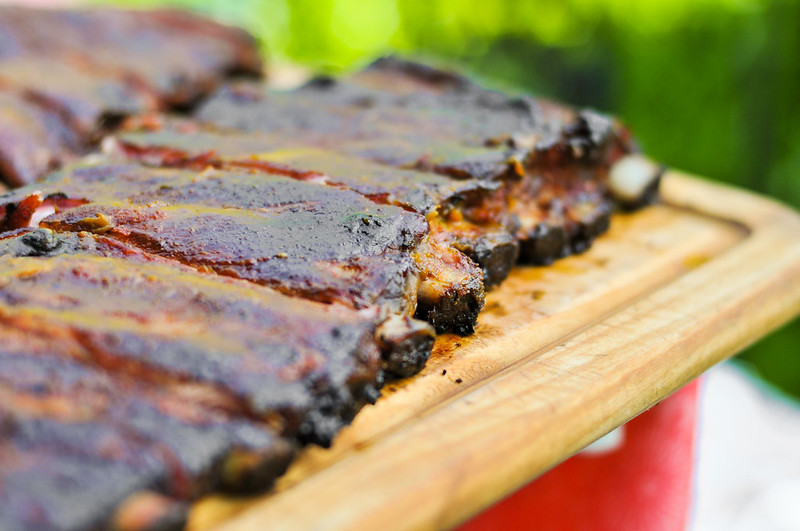 In a sea of all that food, the real highlight of day for me were these ribs made by Meatwave newcomer Tyson. I found out that I'm not the only one with a tendency to go overboard, Tyson came with seven full racks in tow, each moist and tender with a great smokey flavor. Perfectly cooked and meaty, I found myself most drawn to these ribs more than anything else throughout the day. 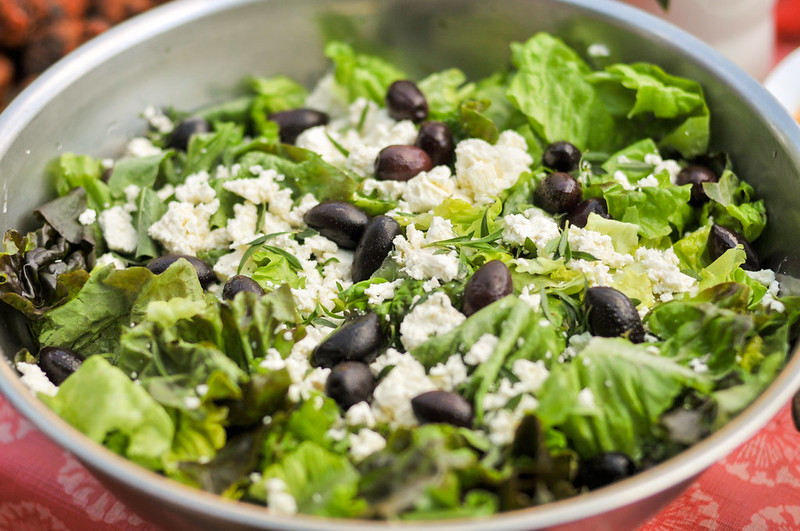 Another newbie, Marcos, brought the one thing we always lack, salad. As a self-described Meatmaster, you don't find me making too many salads, but I enjoy a good when it's there, and this was a fresh and cool option to have and the Meatwavers all seemed to take to this foreign food. 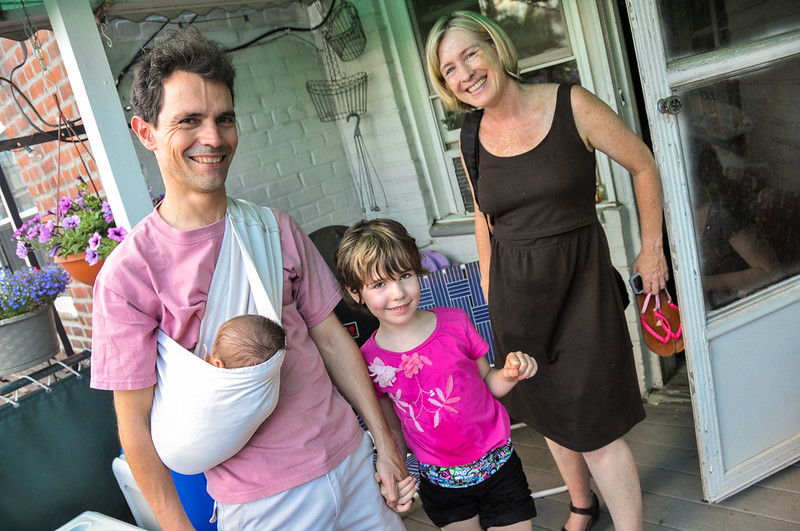 And here's the salad man himself with his family. My wife met Marcos while she was a WNYC intern, only later to find out he lives a few doors down during a chance meeting in the street. So naturally we extended a Meatwave invitation to him and his family and are so happy they accepted. 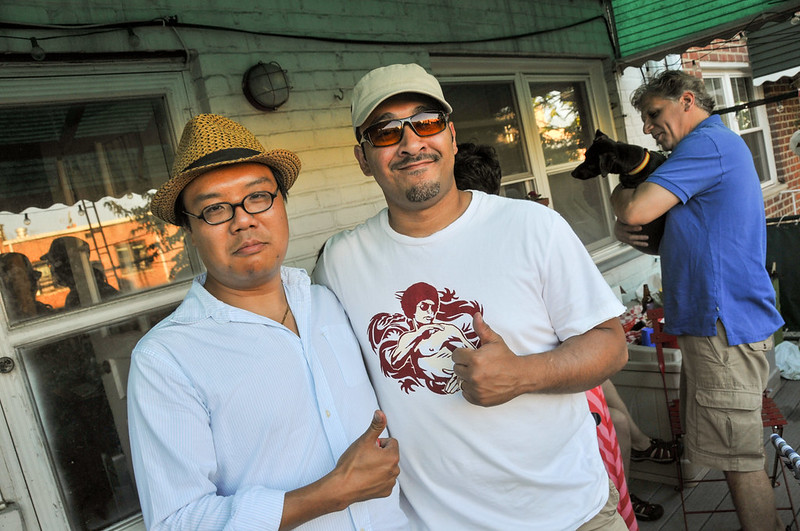 Next up are Tyson and Angel, both Meatwave first timers. Tyson emailed me out of a shared love for barbecue. It just so happens he has a big rig out in Flushing that he cooks whole hog on. I can't wait to try that divine swine, especially since he's a prodigy of none other than Mr. Whole Hog himself, Pitmaster Ed Mitchell. 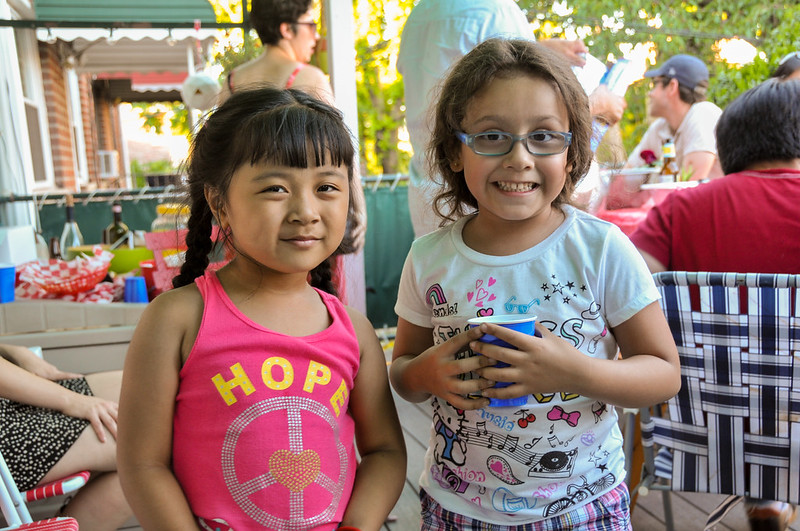 It was also a kid jamboree this weekend, as Marcos, Tyson, and Angel all brought their little ones. Finally we had some people with the energy to go up and down the stairs to the backyard and make use of the great lawn space. 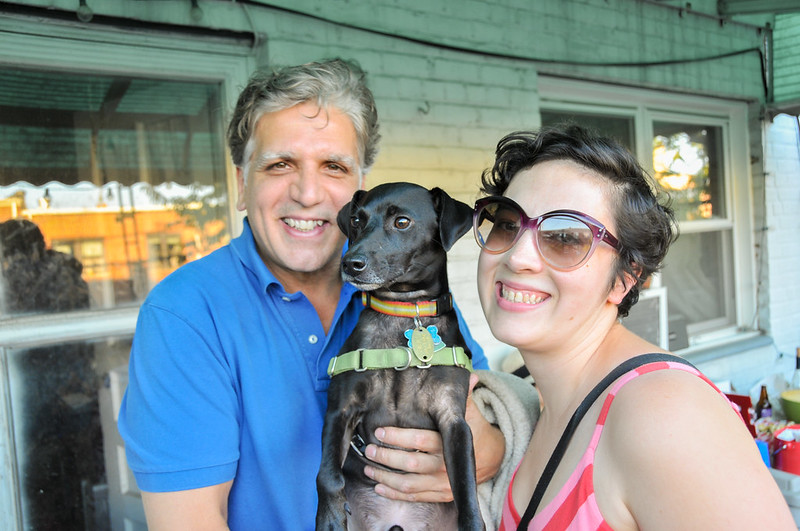 We miss Kait and Nick in Astoria, but they're so dedicated that the still travel all the way from the distant shores of Jersey City. Not only that, but Rex made it as well, who promptly devoured entire bones from the racks of ribs. 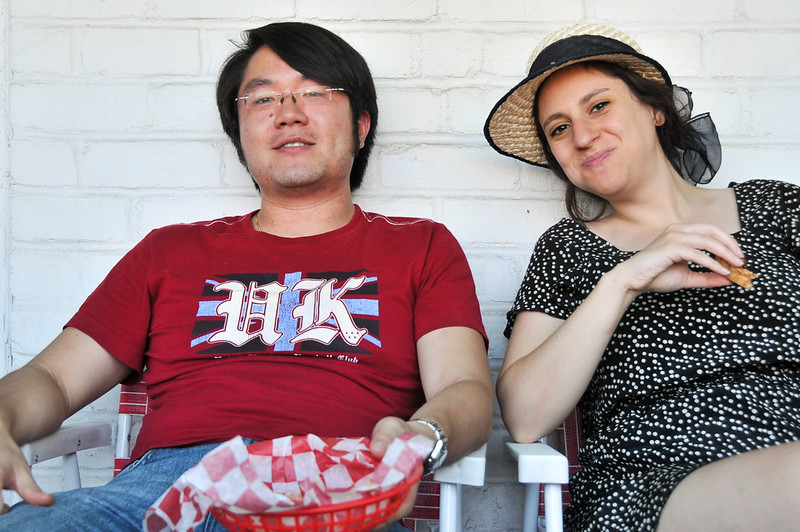 Then there's the persistant Chris, who we can continually count on as a great Meatwaver. And finally Amy, who came bearing incredibly exciting news—she now eats meat! I've taken credit for a lot of vegetarian conversions, not sure if this one counts, but I'll probably add a notch to my successful career as a proselytizer of the way of the carnivore.

Now the Meat-a-thon trilogy has come to a close, or at least until next year when we all meet again for Meat-a-thon 4: The Search for More Money.