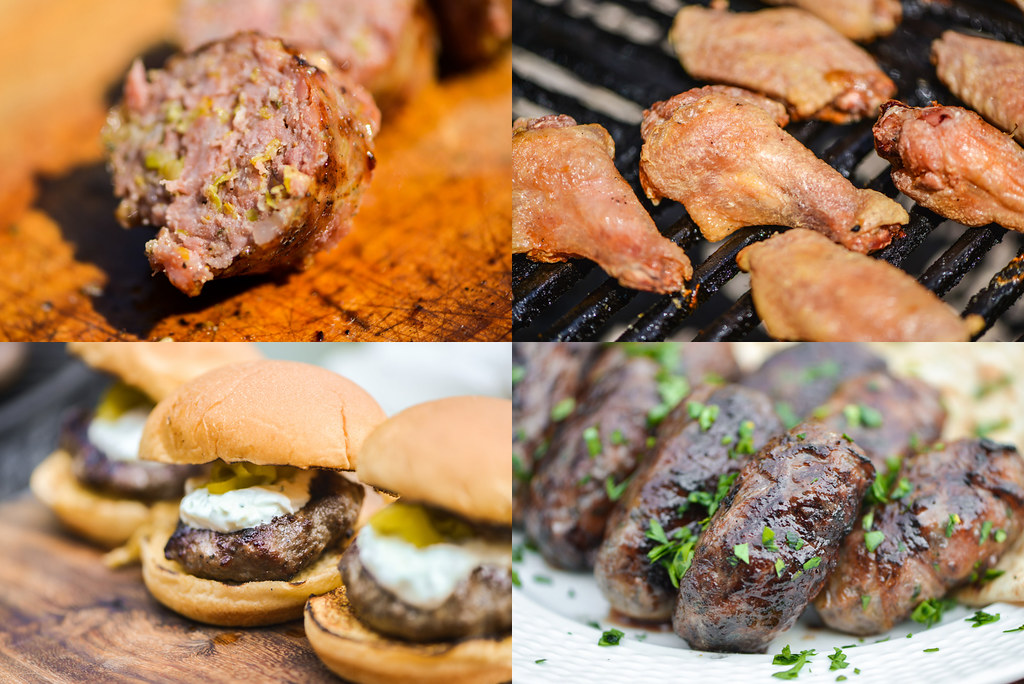 The last Meatwave was epic—44 people, 30 burgers, 9 racks of ribs, 4 chickens, 5 coleslaws, 2 barbecues beans, and 2 ice creams. It was a crap load of work and hell of a lot of fun, but I was hoping for something a little more laid back for the next installment, and I got just that. With a more intimate crowd, I grilled up a bunch of meaty delights influenced from the heavily Greek neighborhood that I live in. It's been a while since I've done a Greek menu, but each time I do it, the food always seems perfectly suited for the summer—always fresh, bright, and just filling enough to leave you satisfied without that overly gluttonous feeling the Meatwave usually brings on. 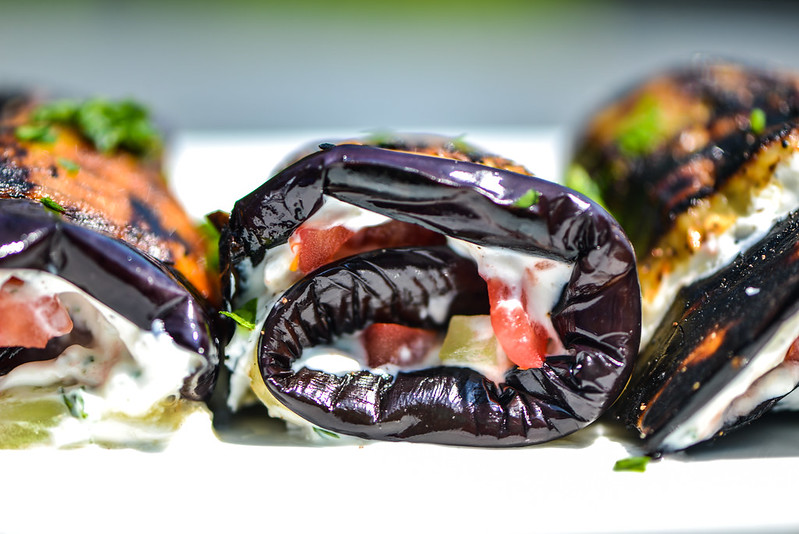 Just because we had a smaller crowd didn't mean I scaled back my ambition at all—the offerings were plentiful and diverse. The day started out with eggplant spirals. These were a last minute addition when I realized I had an extra couple hours before people started arriving and nothing else to do. I grabbed a couple eggplants from the market, along with tomatoes and cucumber. At home, I sliced and salted the eggplant, then grilled them until browned and tender. Next I spread on a Greek yogurt mixture that I made up of items I had on hand like feta, lemon, dill, and oregano. Finally I topped the slices with diced tomato and cucumber and rolled 'em up. There were a refreshing start to what would be a long day of delicious eating. 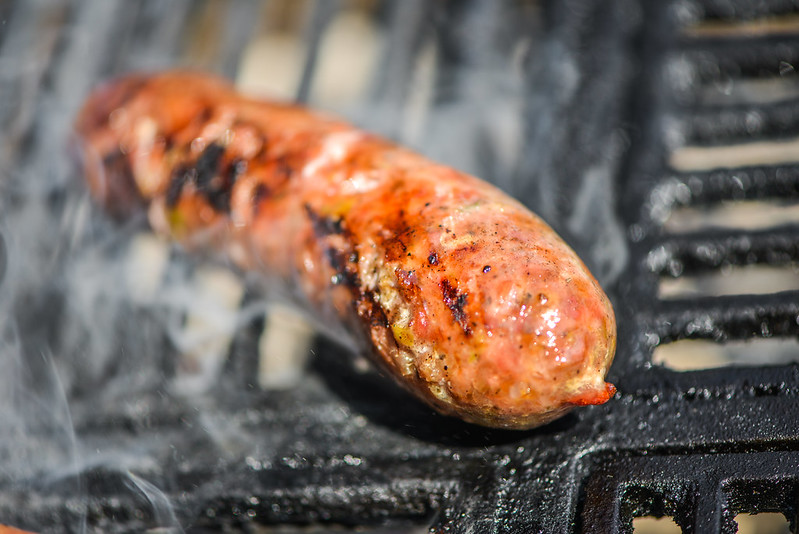 The idea of doing a Greek theme came from my desire to make these sausages—loukaniko. Seasoned with leeks, orange, and coriander, these cured and smoked links had a very bright, summer-y flavor. While I think I did a really good job on the seasoning, the end texture was a little off to me—broken possibly from not keeping the sausage mixture cold enough during grinding and stuffing. I may just be being too hard on myself though since everyone else seemed to really love everything about them. 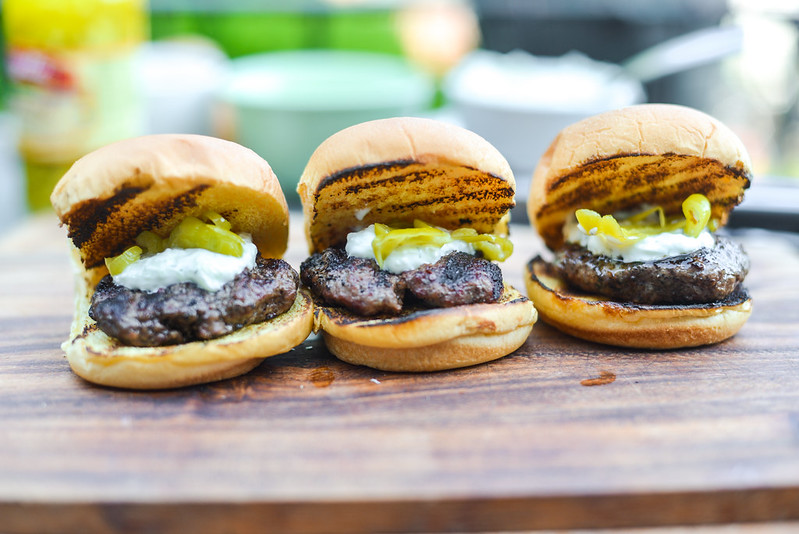 Next up where these cute little gyro burgers. I got the idea from an appetizer from a relatively new joint in my neighborhood, MP Taverna. Their gryo burgers are done with all beef in a loose hamburger fashion. I took mine a step further and tested out burgers assemble in that manner as well as ones with a finer texture accomplished by processing the meat in a food processor. I also tried out different lamb and beef combos and came to find a 50/50 lamb and beef mixture with a fine texture were the most gryro-like and preferred of the lot. 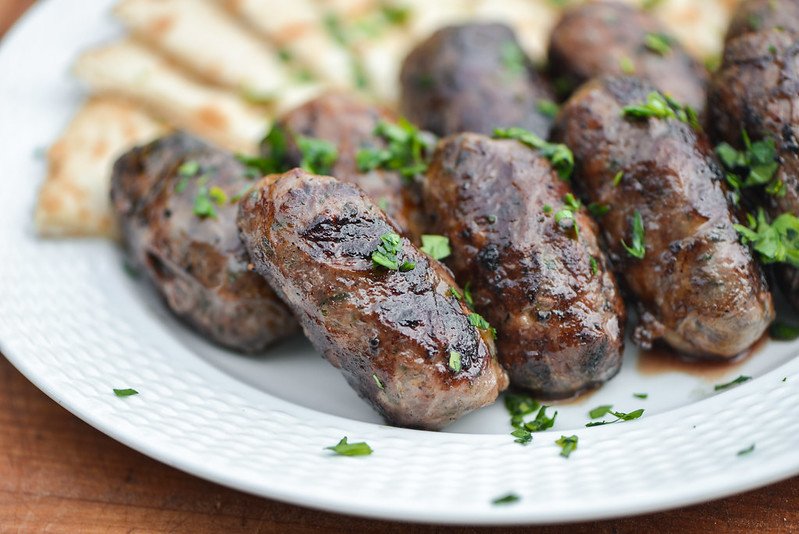 It was a double sausage kind of day as I used a lot of the extra pork and lamb I had on hand to make sheftalia—a Cypriot sausage that's uncased, but wrapped in caul fat. The caul fat helped create a super crusty exterior thanks to the flare-ups the rendering fat created that delivered extra heat to sausages. The inside stayed nice and juicy though and had an uncomplicated light lamb flavor and touch of freshness from the minimal seasonings of parsley, red onion, salt, and pepper. 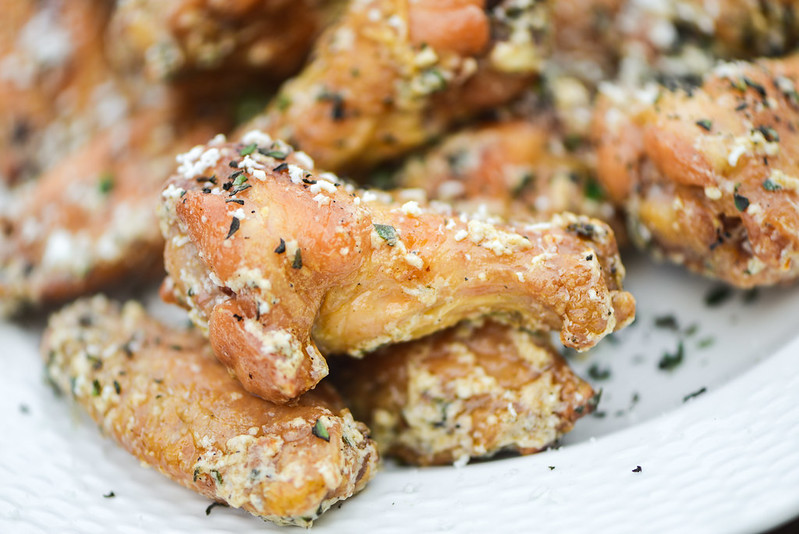 Reaching the halfway mark of the season's Meatwaves without any chicken wings was a problem in need of correction. So I grilled up a bunch of wings until crispy and then kept with the Greek theme and tossed them a tangy lemon, oregano, and Greek yogurt sauce, followed by finely grated feta. They may of not been my all time favorite wings, but they were damn tasty and fit right in with the rest of the menu. 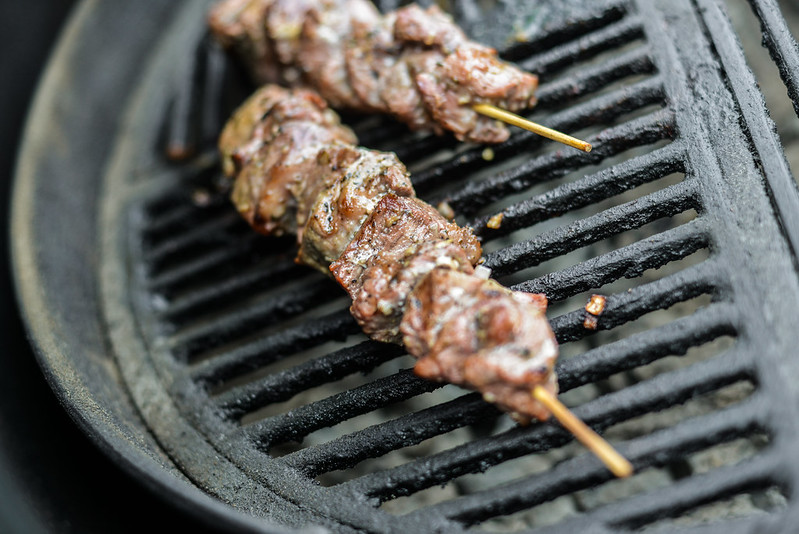 Finally, I had a lot of leftover pork shoulder, which I cubed and soaked in a souvlaki marinade. These were kind of an afterthought and I never grilled them up using the heat they deserved, but still no one could resist the draw of souvlaki even after all the meat that came before. 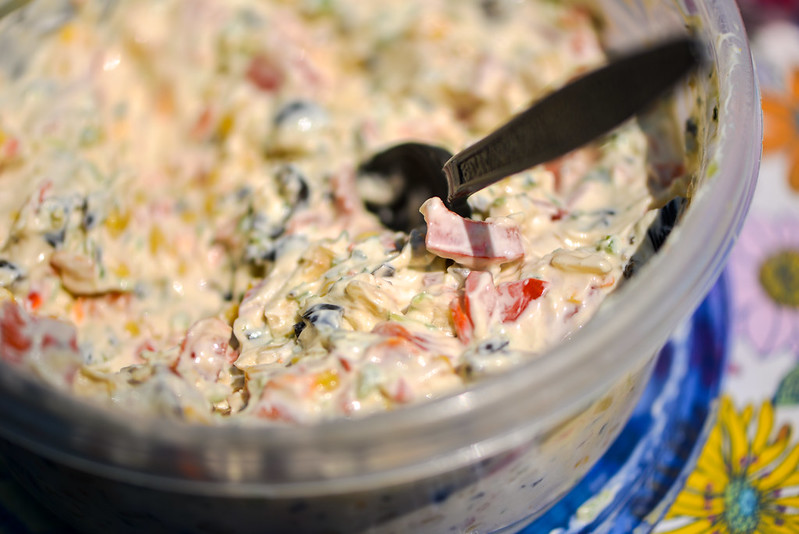 My sister and Chuck brought along a tasty "skinny poolside dip" with dipping fodder so seldom seem at the Meatwave—raw veggies. The dip was a tasty mixture of cream cheese, corn, jalapeños, olives, and ranch dip seasoning. 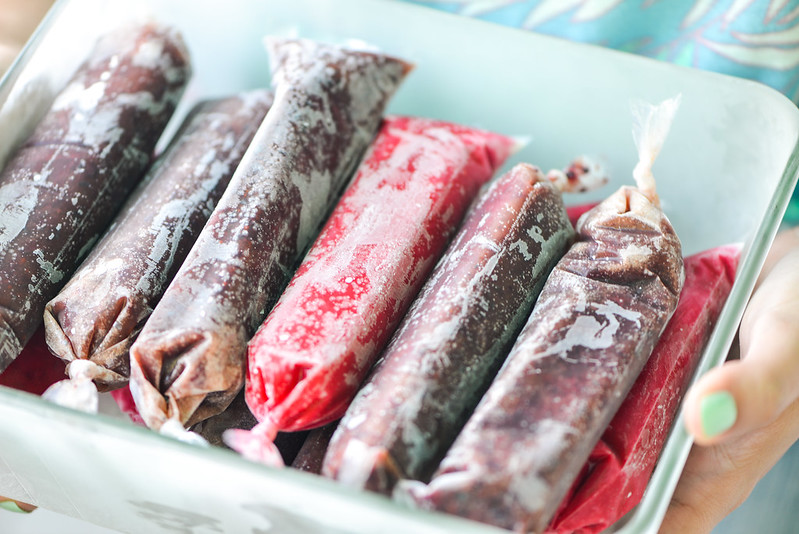 For dessert, Kristin made two types of refreshing popsicles—boozy moonshine blueberry and raspberry and cream. Both were a welcome sight to cool us down after a semi-hot day that found us all stuffing ourselves silly. 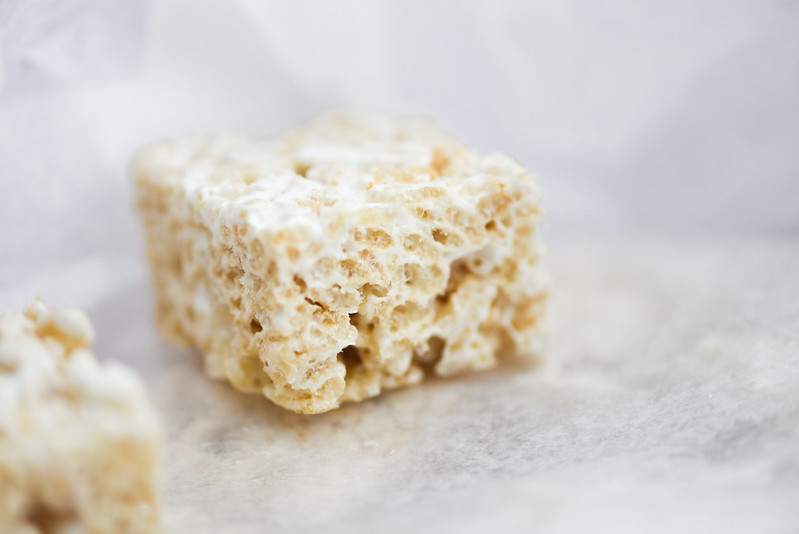 Anna also got in on the dessert action with browned butter Rice Krispy treats. Anna is a dessert genius and I always end up eating an unhealthy amount of whatever she brings, including these deceptively light Rice Krispy squares. 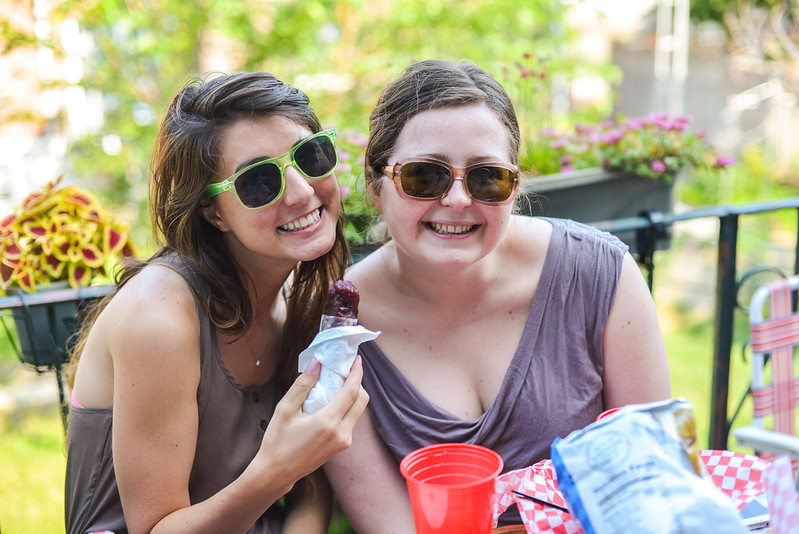 As I mentioned, we had a much thinner crowd this time around, but it was still a healthy twelve people total (I probably made enough food for over 20 though). To start us off we have Maggie and Naomi, two of Kristin's co-workers who are becoming die-hard Meatwavers, something I love to see happen. 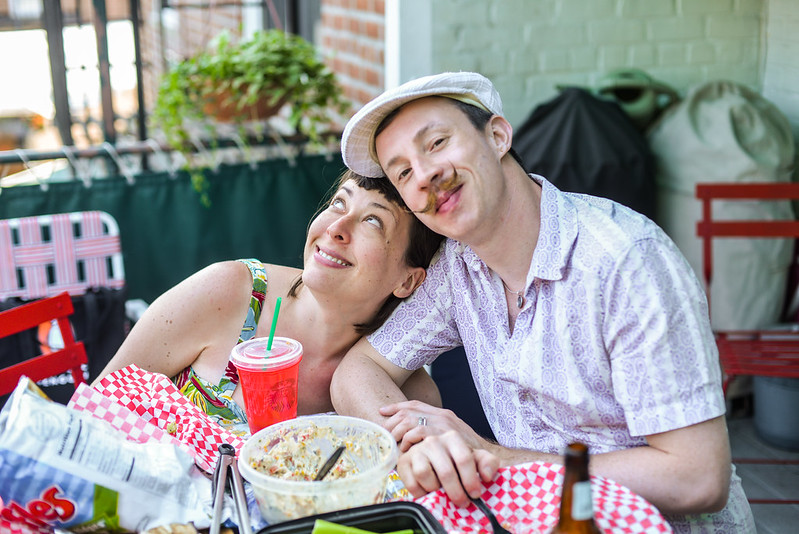 Next, special props go out to Noah and Alison for taking the long trek once again from Windsor Terrace to Astoria, with their little one—Max—in tow. So many of my friends with children plan "the" Meatwave they'll attend each summer, but this already makes two in row for Noah and family already. He gets bonus points too for being my only co-worker to come this season as well (the rest of guys gotta step it up). 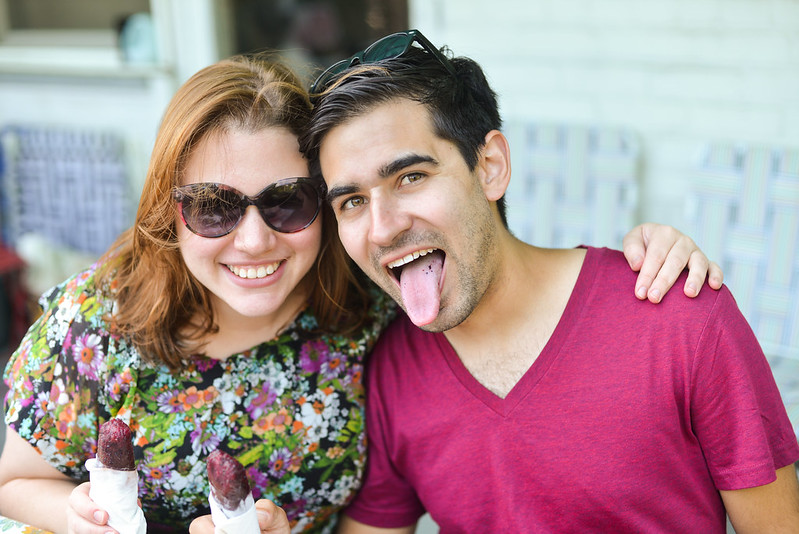 Rachel and Chuck are a standard fixture these days, and they're always contributing well with booze and food. Most importantly though, Chuck's job as a dog walker means he's always bringing new friends like... 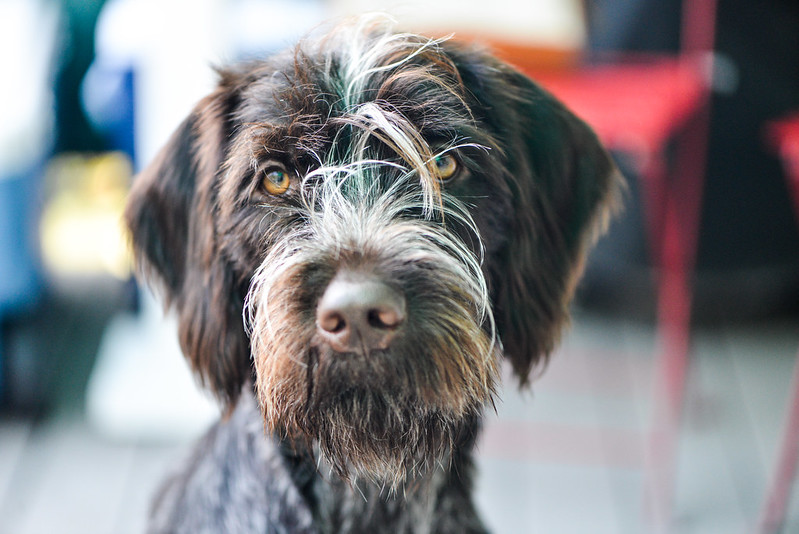 Tobin! Tobin was the first Wirehaired Pointing Griffon I've ever met (didn't know they even existed until he showed up) and he was quite the endearing gentleman. With a firm handshake and calm demeanor, Tobin stole my heart (sorry Kris). 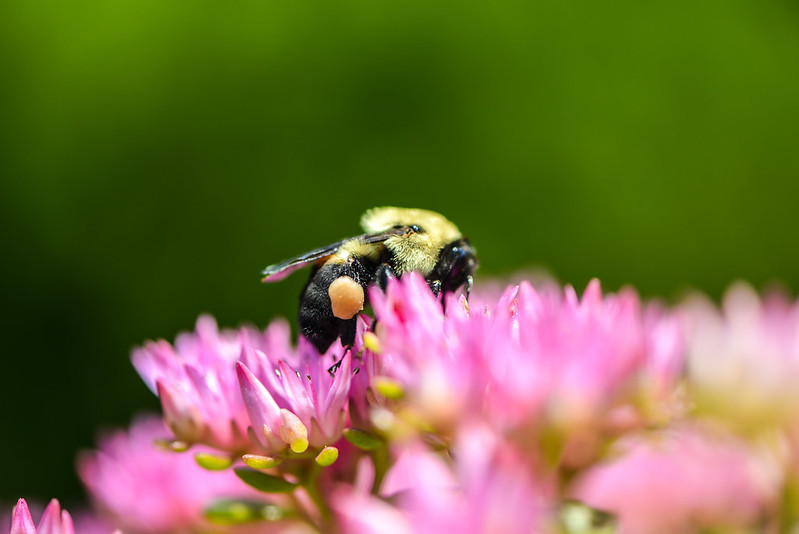 We also had some bumble friends show up to partake in the pollen-y treats I've been growing for them all season. 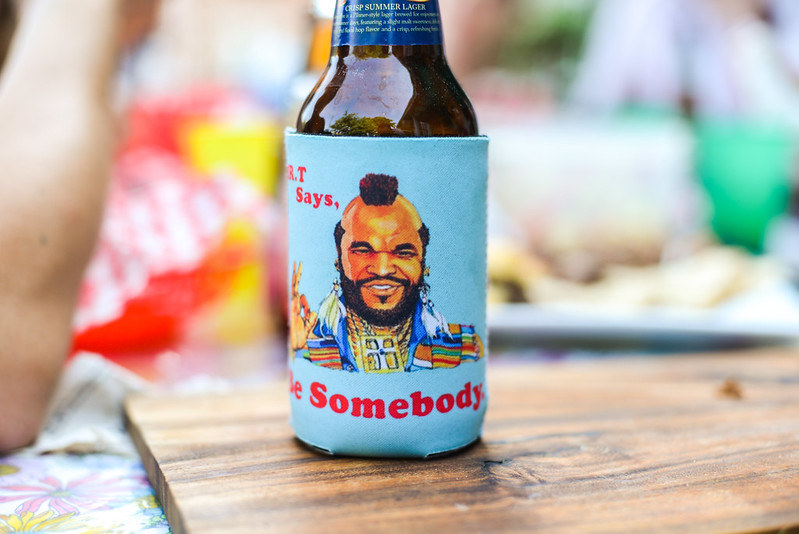 And finally kids, remember Mr T says, "Be Somebody."