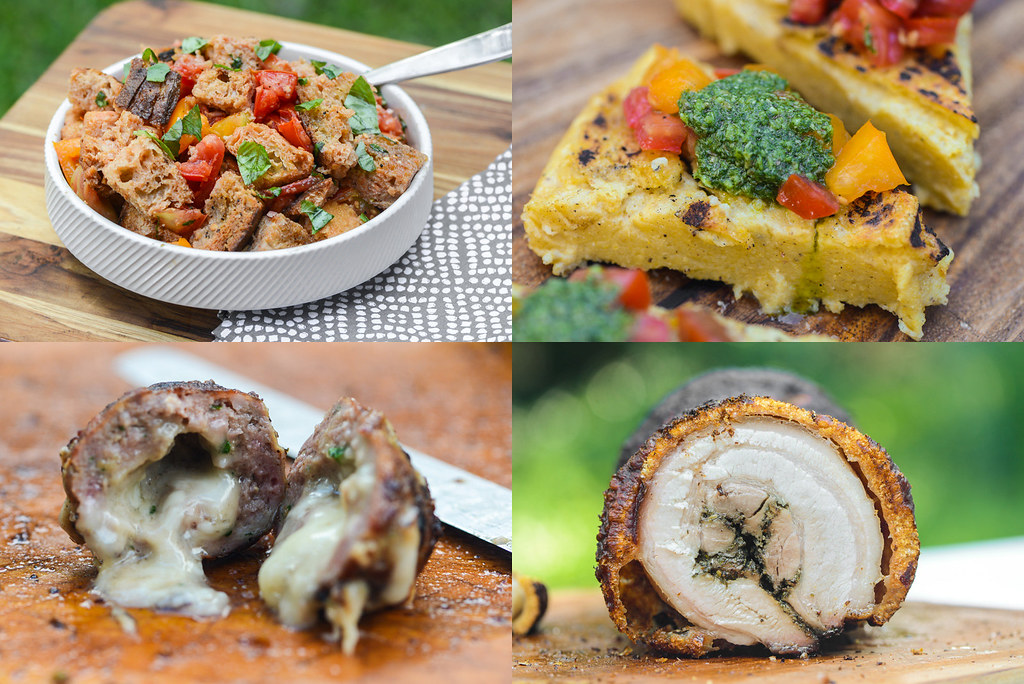 Summer Meatwaves in Durham are tricky—the odds are good that you'll be facing some oppressive heat, the question is will that heat be the marginally tolerable type, or the type where even considering venturing outdoors is unthinkable. Because of this, I've shifted Meatwave season to happen more in spring and fall, but I can't go all summer without having a cookout, so I scheduled just one in the dead of summer and hoped for the best. To help alleviate the probability of extreme heat discomfort, I made it an evening affair and decided on a fairly light and refreshing Italian menu (if you discount the huge chunk of pork belly). Of course, this particular Saturday ended up being an unseasonable cool, 80-degree day, but that stroke of good luck just made it all the better. 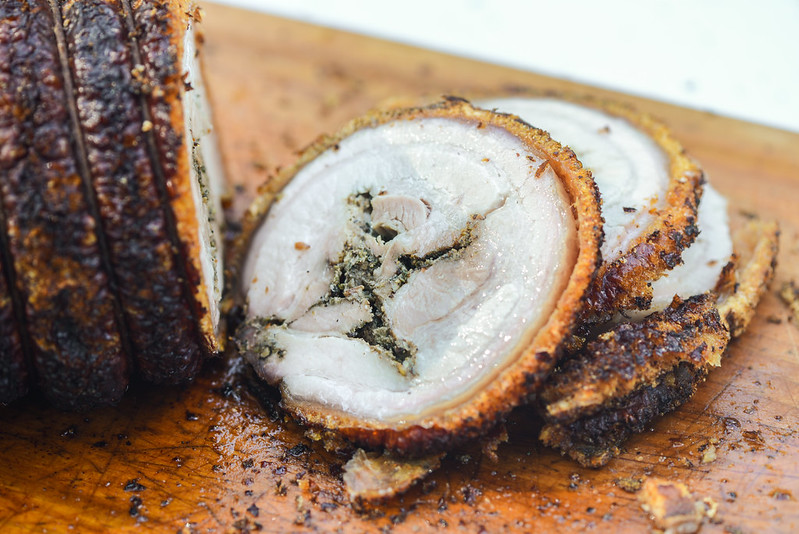 The perfect temperature meant no one had any qualms taking part of my centerpiece meat of the day—smoked porchetta. This was nine pounds of pure pork belly, slow smoked to 180°F, then crisped on the rotisserie over a hot fire. The result was wonderfully smoky, crackling skin with a super tender, juicy, and well seasoned meat that made this the best porchetta I've ever cooked. 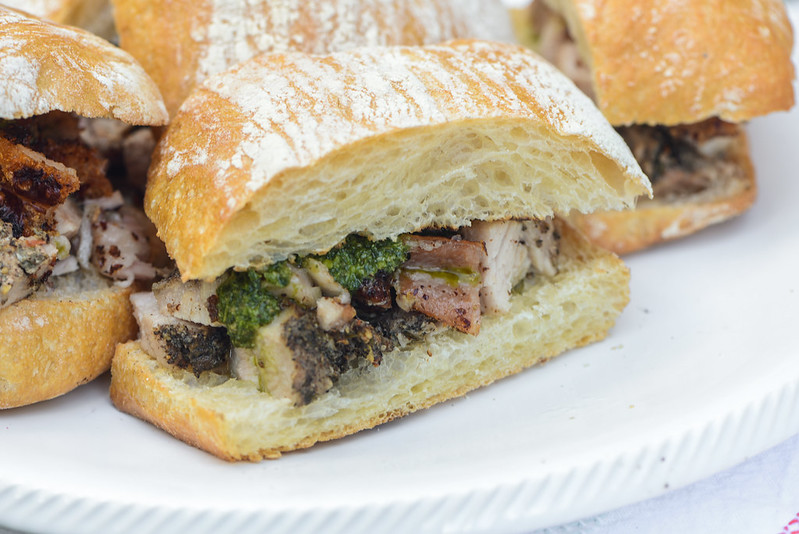 When considering it may be a hot day and a heavy meat may not be what most people would want, I made a plan to serve the porchetta in smaller sandwiches that would be a more sensible way to enjoy it if it had been the usual 90°F-plus. I actually got the idea from a recent trip to Vancouver, where I had an outstanding sandwich from Meat and Bread that was porchetta meat, crispy skin, and Italian salsa verde on warm ciabatta. So I made exactly than, except I think the smoked touch made it even better. 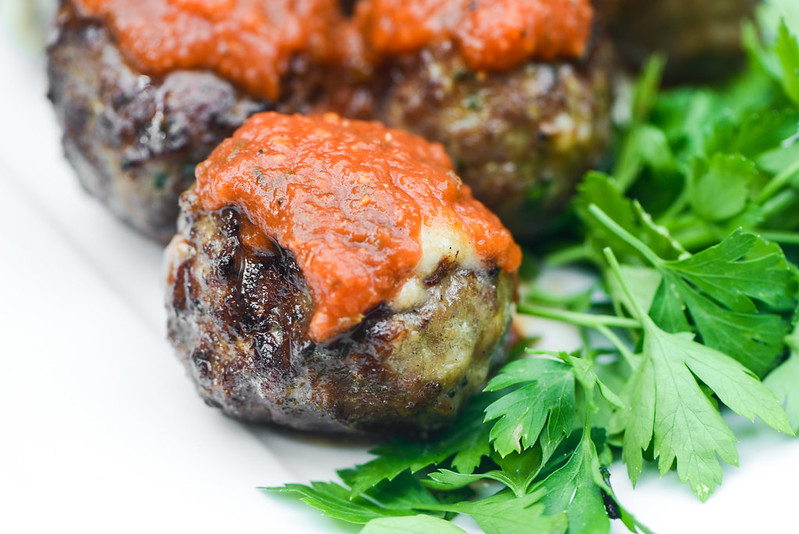 Back when I did a meatball Meatwave, I had so many recipe ideas, I couldn't make them all. One such idea was to make my Italian meatballs and stuff the center with cheese. Since that fit right into the theme, I made them for this Meatwave, and boy were they awesome. The meatball mixture had a combo of parmesan and pecorino in it, then the middle was stuffed with mozzarella and sharp provolone to combine to make these super cheesy and extra flavorful. 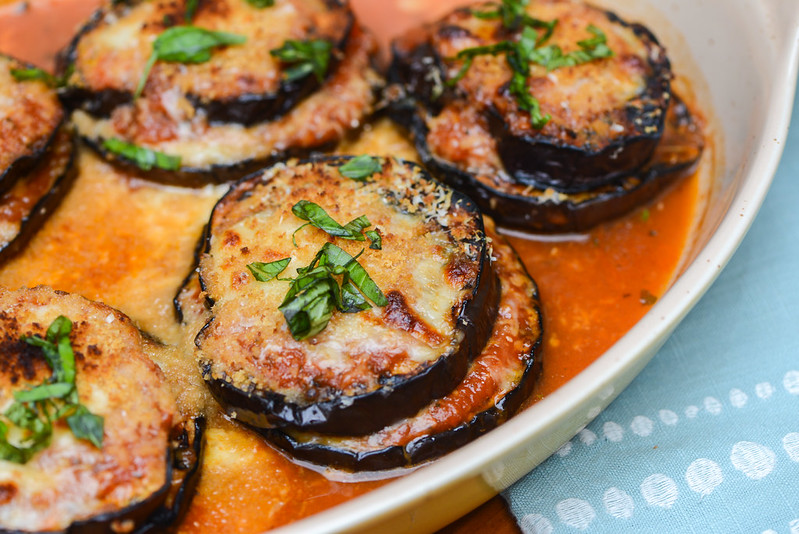 Another idea on my perpetual recipe list was grilled eggplant parmesan, which ended up working out quite well put into practice. To make it, I grilled eggplant slices and then assembled them in parm form with marinara sauce, mozzarella, and parmesan cheese. I then baked it until the cheese was melted and browned and finished it off with some fresh basil and toasted breadcrumbs. Of course a big part of the attraction to eggplant parm is the breaded and fried eggplant, so that was obviously missing, but the grilled eggplant made the dish lighter and added a different flavor component that really made it into its own thing. 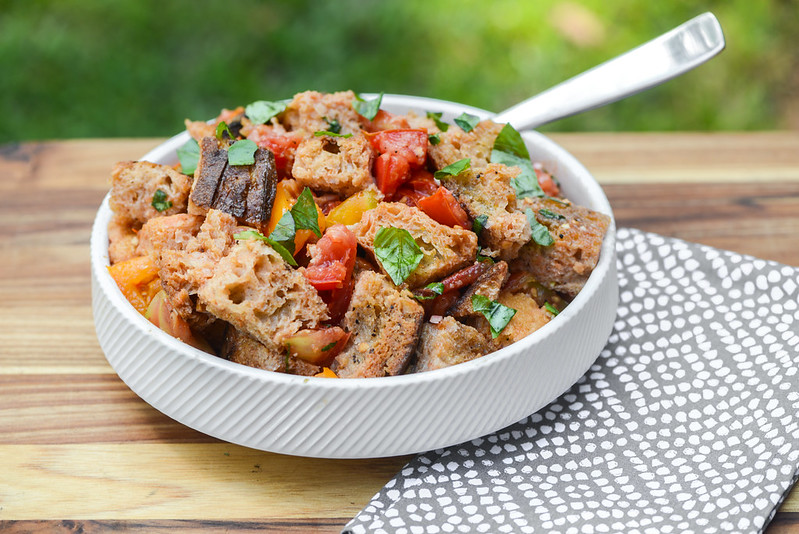 Since we're in the middle of tomato season right now, I used that as an excuse to make one of my favorite tomato dishes—panzanella. There was a little twist here though, instead of roasting the bread in the oven like I normally do, I toasted it on the grill and rubbed it was some garlic, which added a little flavor boost to what is already one of the best salads out there. 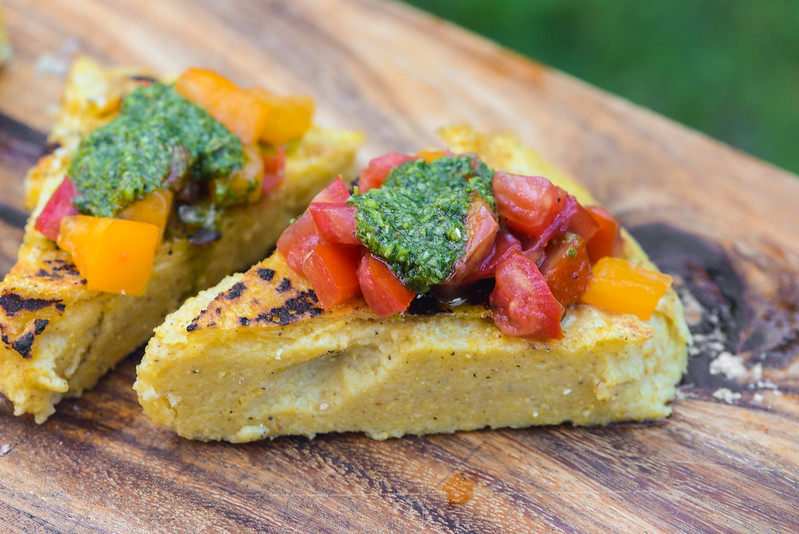 I had tried to make grilled polenta before to marginal success. With many years of cooking experience under my belt since then, I decided to give it another go and definitely did better this time around, but this is still a challenging one to grill. The real trick was to use a thin spatula to flip the polenta, so the crispy, charred top layer stayed in tact, but that's easier said than done. I got a few presentable specimens though, which got even better when topped with fresh tomatoes and a little salsa verde. 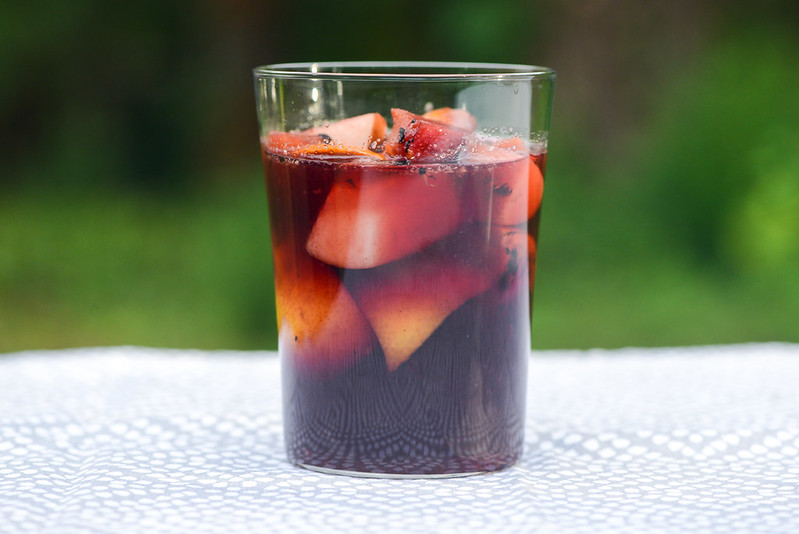 After hosting a family event recently at my house, I was left with more bottles of wine than I could handle. Seeing the Meatwave as a good way to put those to use, I made two grilled sangrias. The first was a red sangria made with grilled oranges, nectarines, apples, and more. The second was a white version using all grilled citrus—lemon, lime, and orange. I'm personally not a sangria guy, and I thought my efforts weren't all that hot, but my guests loved it, so I guess grilled sangria wasn't such a bad idea after all. 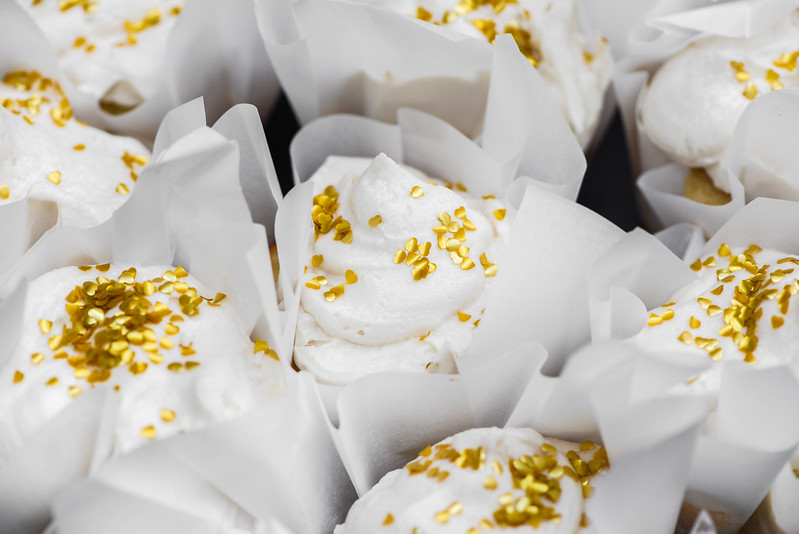 A special dessert shout out goes to these cupcakes made by Kim. I definitely ate way too many, but they were so light and soft, with a perfectly creamy and not overly sweet frosting, that I found them irresistible. Seriously, these were one of my favorite Meatwave desserts of all time. 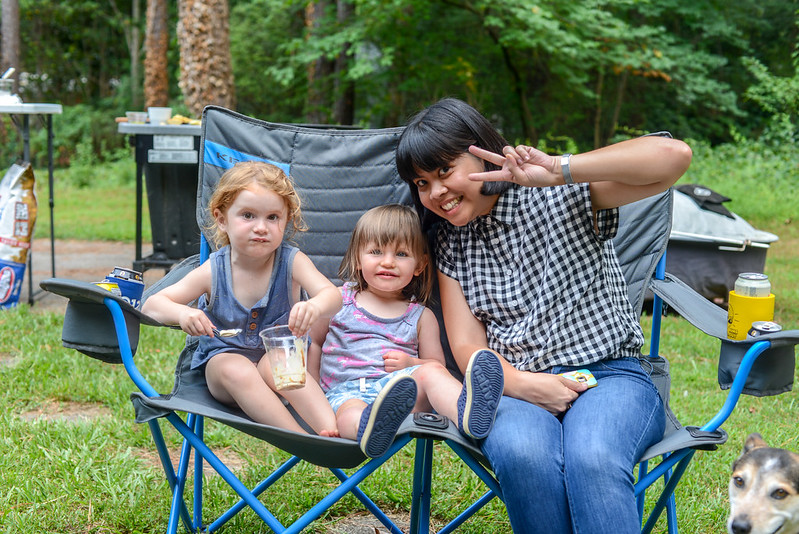 With a mid-summer Meatwave, I also thought the expected heat would keep crowd thin, but the fortunate weather actually made this a well attended event. Kristin had two great hang buddies here—Annie and Alice. 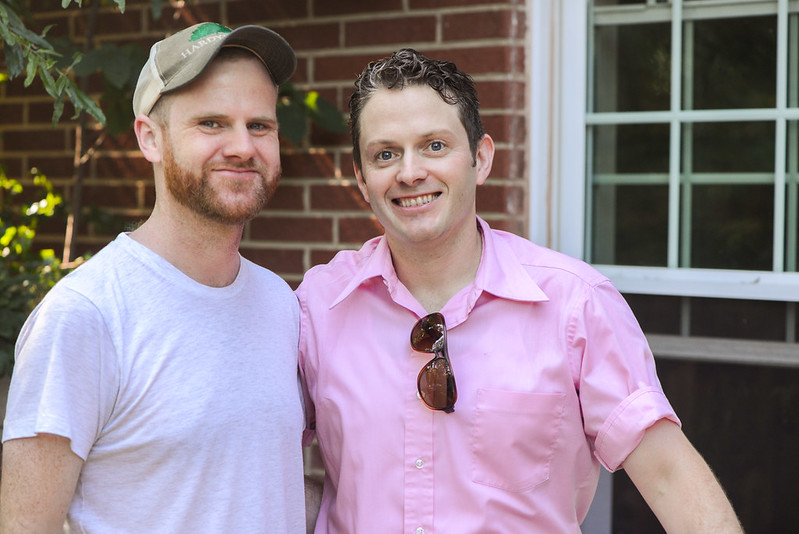 Next in our line-up is Bryan and Patrick, just looking good as always. 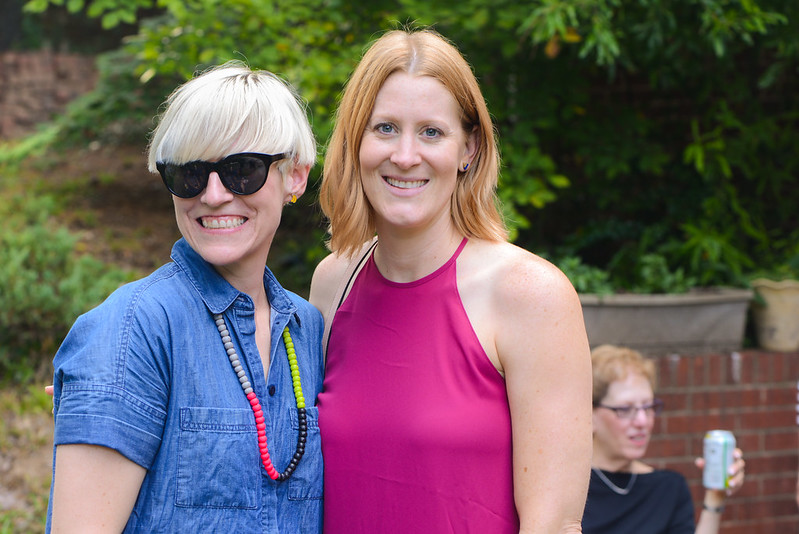 Lindsay and Leslie had another engagement, but even so, the call of the Meatwave was too strong and they both made time to stop by and hang out before they had to jaunt off to their next eating event. 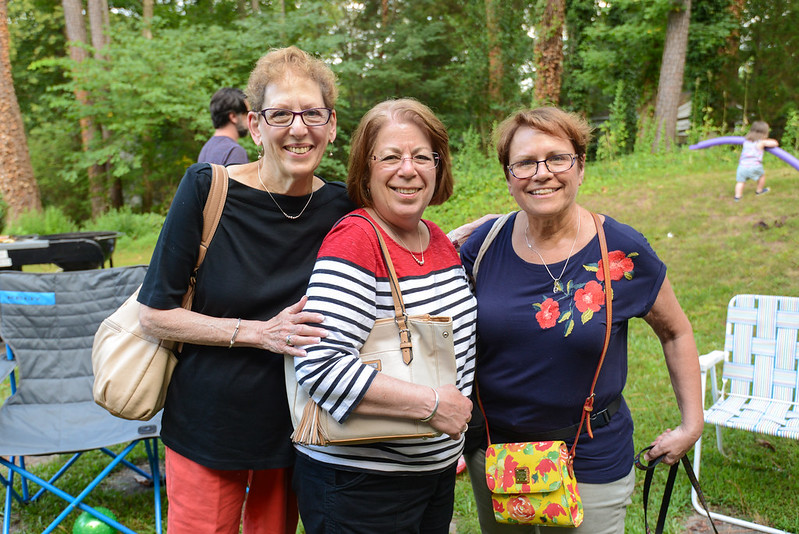 My Mom made it out again and brought along her two new neighborhood friends—Barbara and Judy. Always happy to welcome new Meatwavers, and even better that they enjoyed all the food and good company. 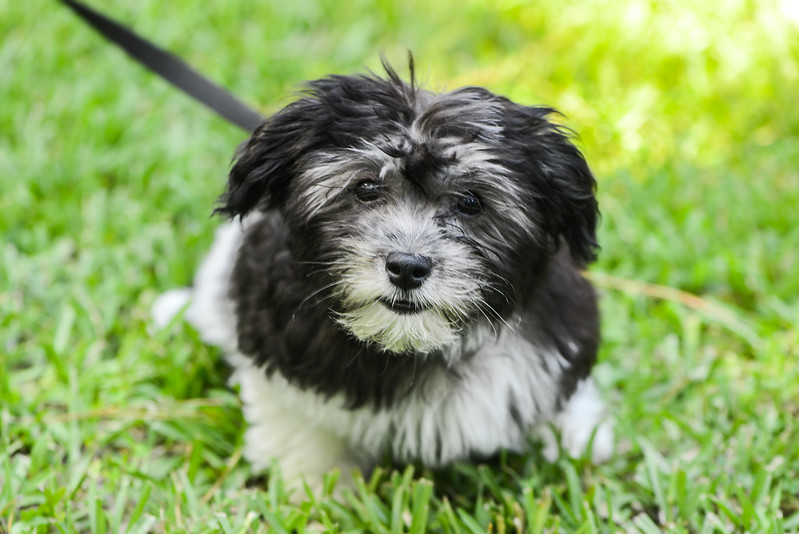 And last, but not least, we have new puppy Zora! I usually reserve the last spot for my best dog-pal Betty, who was in attendance, but Zora was stealing hearts as she jumped and played and showed unending enthusiasm at her first Meatwave.