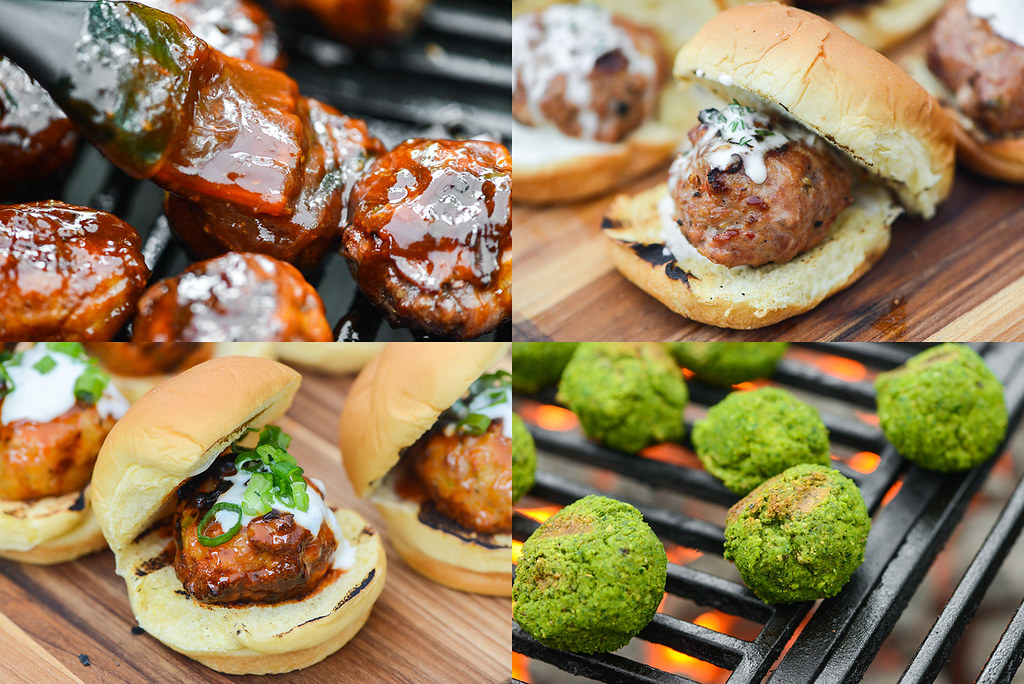 After 14 years, I didn't think there would be a lot of firsts for the Meatwave, but this past cookout represented the second one in 2017—earlier this year we celebrated the first ever Meatwave in February, and in April we had our first one held despite a definite forecast for cold and rain. Under normal circumstances, this would have called for postponing the event to hold out for better weather conditions, but this was no normal Meatwave as we had four guests from New York in town who were looking forward to reliving the good times we deprived them of by moving south. So with some ingenuity and help from friends, we pulled off a stellar meatball-filled event in the face of some unfavorable obstacles. 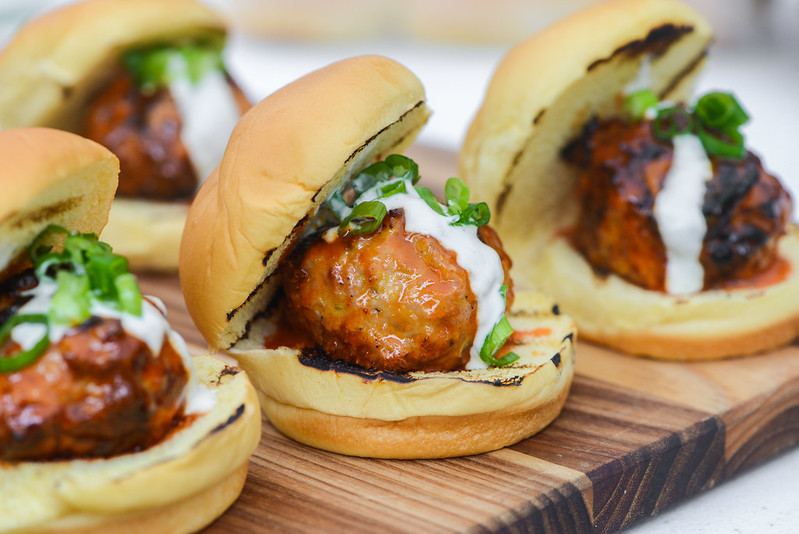 Having guests from out of town presented another challenge as well—I wanted to limit my prep time as much as possible to be free to hang out with them. That left me checking my ambitions, cutting seven meatball ideas down to four and picking all recipes that could be put together relatively quickly. The first of the lot was something I've had on my to-do list for a long time—buffalo chicken meatballs.

I had actually pitched this idea to a couple clients earlier this year and it was rejected both times, likely because the internet is already awash in similar recipes. Still, I have never made them myself and having the idea top of mind just made my desire to cook them even stronger. I used some previous learnings to make a chicken meatball that held together on the grill in excellent form, and then dunked those meatballs in a Buffalo sauce and placed them in slider buns, finishing them with ranch and a sprinkling of scallions. The light flavor of the chicken made the Buffalo sauce really stand out in what was the most praised creation of the day. 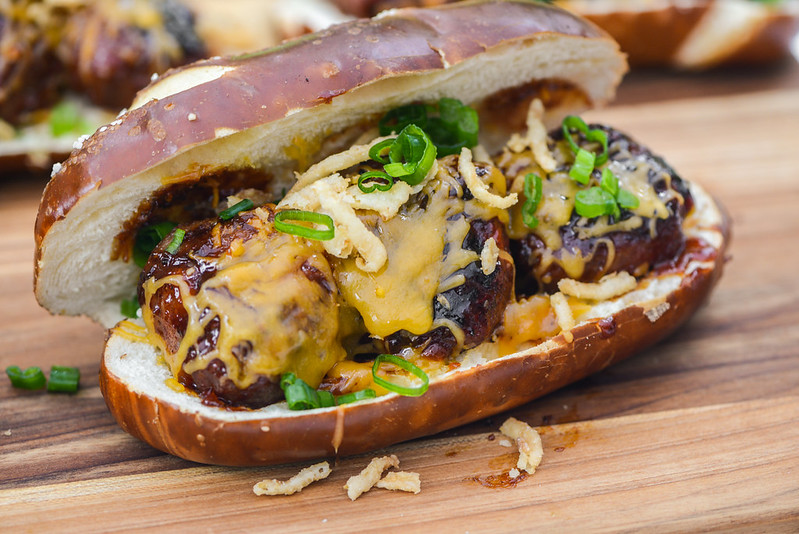 Next up were these MOINK ball heroes. For the uninitiated, MOINK balls are beef meatballs wrapped in bacon and glazed in barbecue sauce. They're a common sight among pitmasters, but I have never seen them take the form they did here—placed in pretzel rolls and topped with cheddar cheese, fried onions, and scallions. As if a MOINK ball wasn't good enough in its own right, these heroes really took things to the next level. 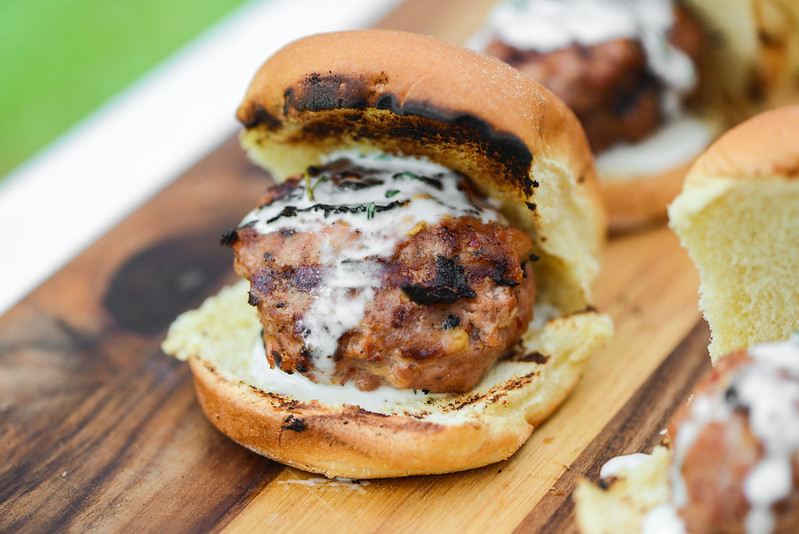 Last in the meat category were an inspiration taken from The Meatball Shop in New York—spicy pork meatballs in a parmesan cream sauce. I used to get this combo somewhat regularly, loving how the cooling parmesan cream played against the spicy meatball, creating an excellent balance I personally liked served on top of a bed of rigatoni. For easier eating, I presented mine in slider rolls and they were definitely my favorite dish of the day. 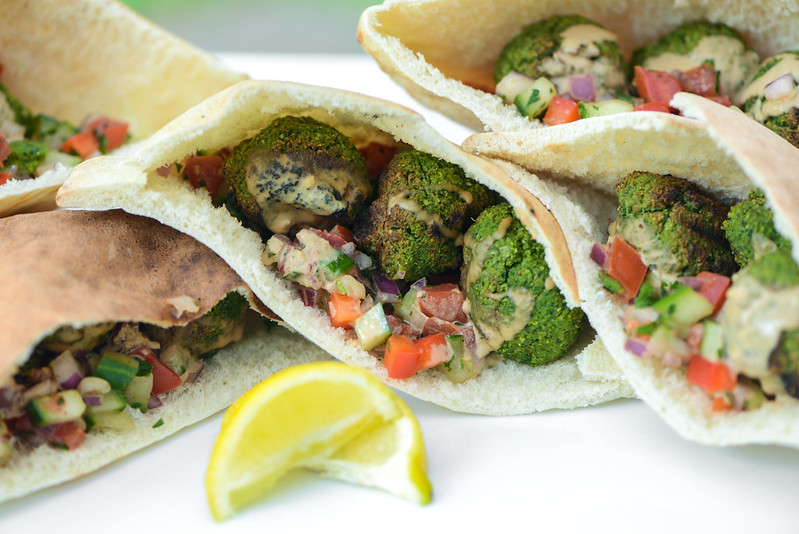 For the vegetarian crowd, I tried out grilled falafel. I know, I know, not frying falafel could be considered sacrilegious, but the hot coals did these little balls of chickpeas justice. It helped that I took cues from my favorite falafels and packed mine with a ton of herbs, giving them great flavor and a beautiful green color. I wasn't sure if they would hold together on the grill, but a little time over indirect heat first set them up well, which allowed me to sear them over direct heat next, giving them a nice crunchy exterior. It wasn't as thick and crisp as they would have been if fried, but it was still pleasing and their immense flavor made up for any loss of ideal texture. I served them up in toasted pitas along with Israeli salad and tahini. 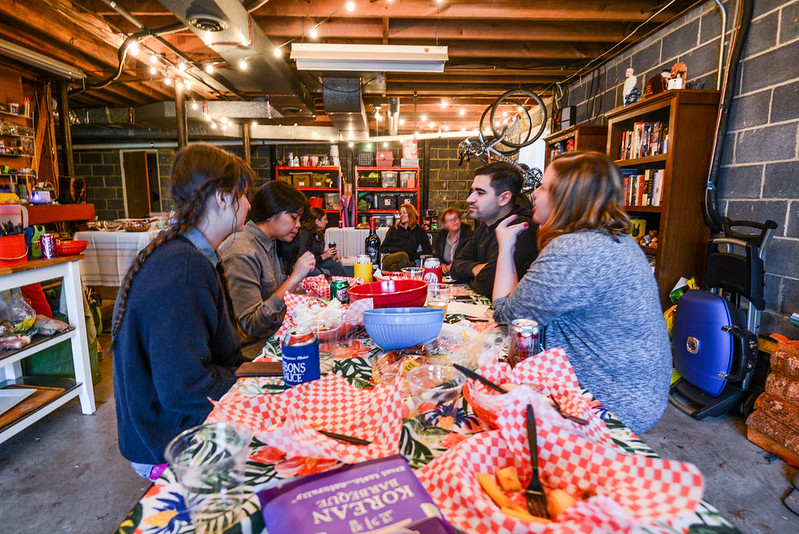 So how did I pull this all off in a continuously rainy, 50°F day? Well, it helps that I now have a large basement connected to my garage that could house all of the tables and people. I then placed one of my pop-up canopies next to the garage door to create a covered grilling area outside. Even with this set-up, the chill was a bit much and we had to keep opening and closing the garage door throughout the day, but this setup kept the meat flowing and all the guests comfortable and dry, making me feel like cancelling Meatwaves because of weather may be a thing of the past. 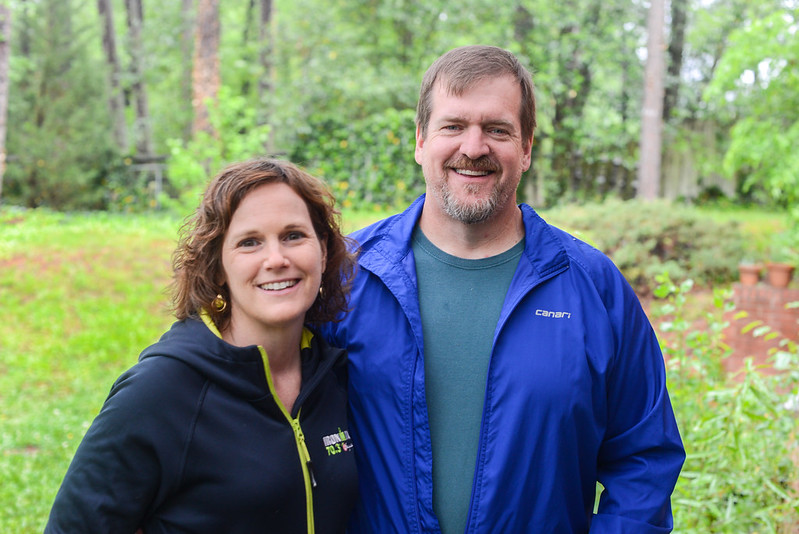 My main fear with the forecast was not so much how I would grill—I've cooked in a many adverse conditions before—but if anyone would actually show up. Luckily I have totally awesome friends and we had a nice sized crowd that included newcomers Sue and Chris. I'm a little embarrassed as I had inadvertently omitted them from the invite list previously, but now that I've righted that wrong, I hope I can make up for lost time by having them join as much as possible! 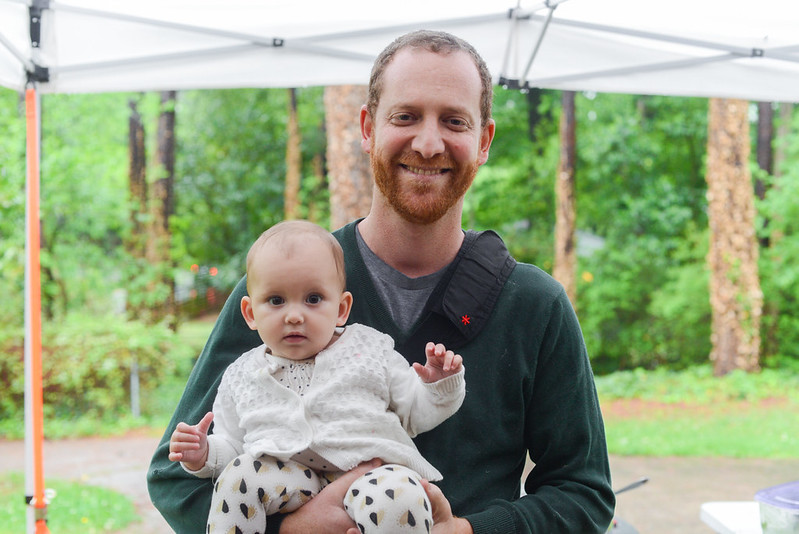 We welcomed back Gabe and Neko for the first time since last summer. I was lucky to get away from the grill long enough to have some quality playtime with Neko later in the day. 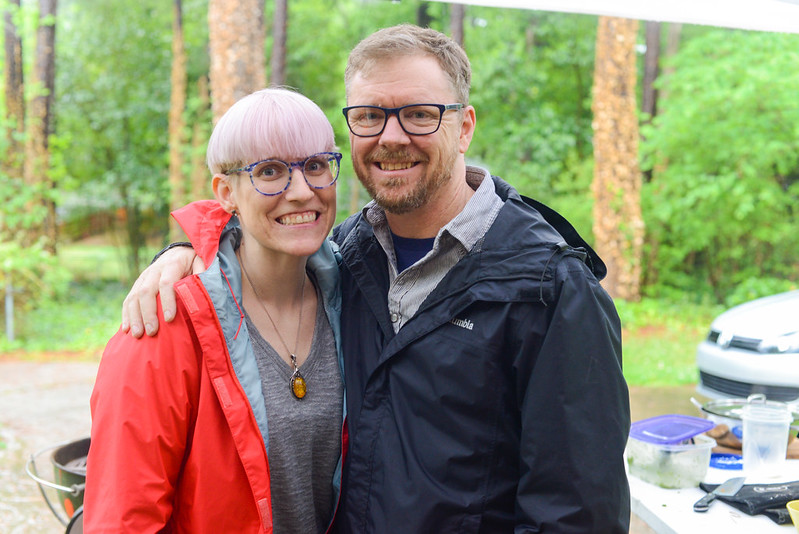 I have include Leslie and Steve in the roll call each time as documented proof of their so-far flawless attendance record. 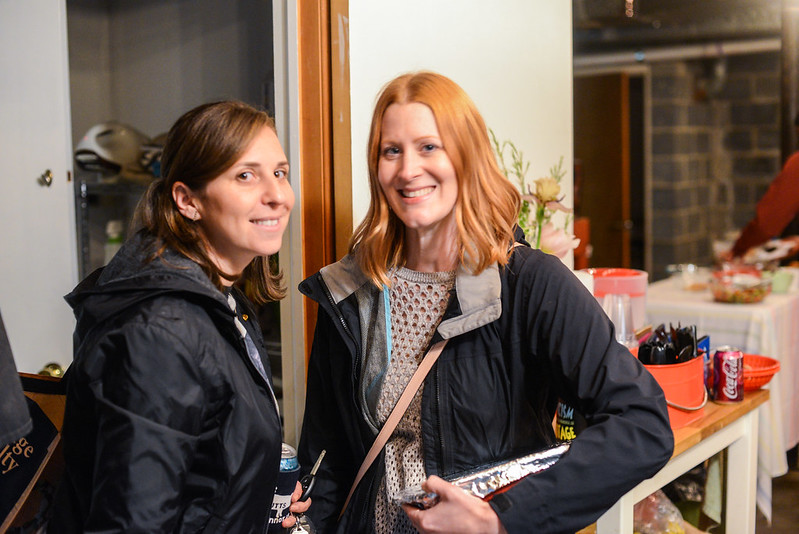 In general I'm not good at getting photos of everyone at the Meatwave—my wife constantly tells me to take these photos earlier in day and I never listen. I was especially bad this time around, and just happened to catch Jenny and Lindsay as they were heading out the door. I wanted to make sure Lindsay got represented though because we're going to miss her a lot while she's away in Spain for the next month. 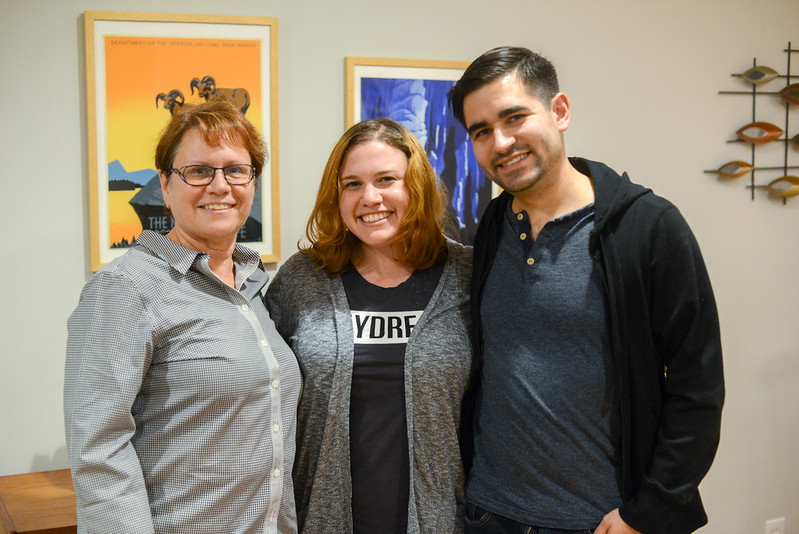 And last, but certainly not least, are my family—my Mom, Rachel, and Chuck. My Mom recently made a move to Durham, so she's sure to become more of regular than in the past, and we were so happy to have a visit by my sister and Chuck coincided with with the Meatwave—I don't like to play favorites, but I miss them the most from New York. Maybe one day they'll also make the move to North Carolina so the Meatwave can truly feel whole again, but until then, we might just need to make cookouts a regular thing whenever they're in town visiting.