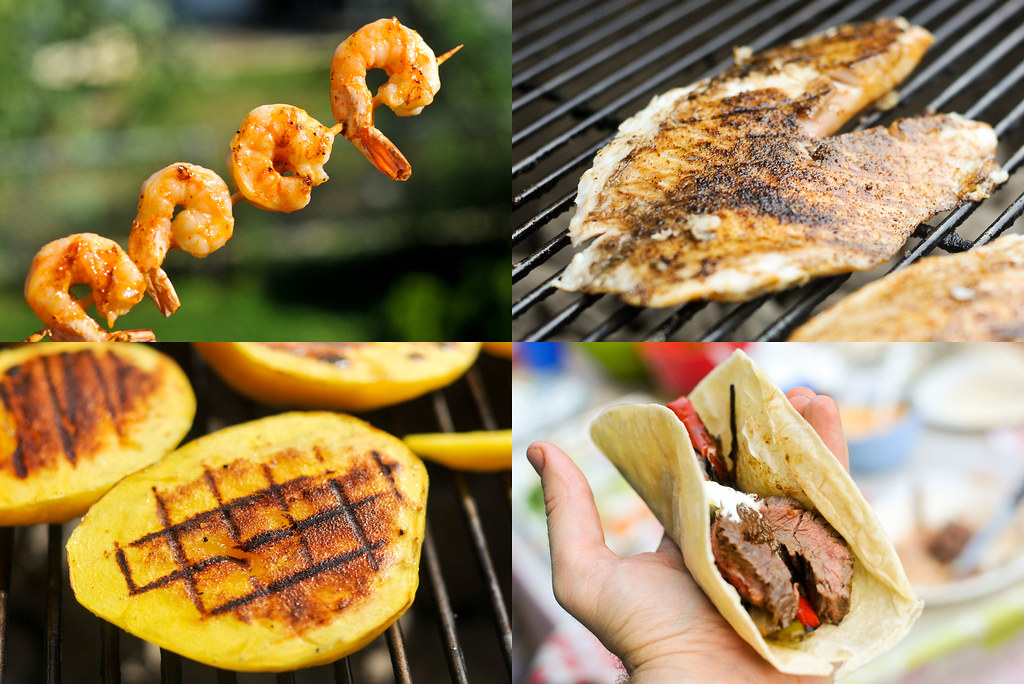 The Meatwave is 7 years in now, and during this time I've learned an important thing, ladies love the meat. Now I'd like to think my chiseled good looks (yeah, right) bring them in, but faced with the reality of the situation, I know they're coming for one thing and one thing only, lots o' meat! So this past weekend's Meatwave was dedicated to all the meat-loving ladies out there, with a menu devised and mostly prepared by the one that I'm honored to call my wife, and with that came a food that's fairly uncommon around these parts, fish! 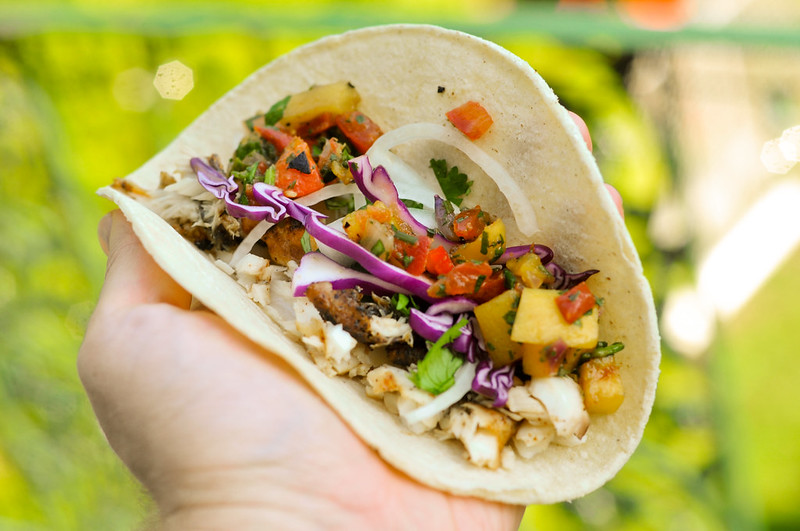 For as much as I try to like seafood, I just can't seem to get over that hurdle that's hold me back from exploring a whole side of grilling I've yet to tap into. Therefore, fish is a rarity at the Meatwave, but since the wife is keen on creatures of the sea, her menu featured them front and center, staring with tilapia fish tacos. I pushed my aversion away long enough to down one taco, which I did find rather pleasant. The fish was light and nicely grilled, taking on a lot of the flavors of the taco toppings, which kept any fishy taste (the part I personally dislike) at bay. 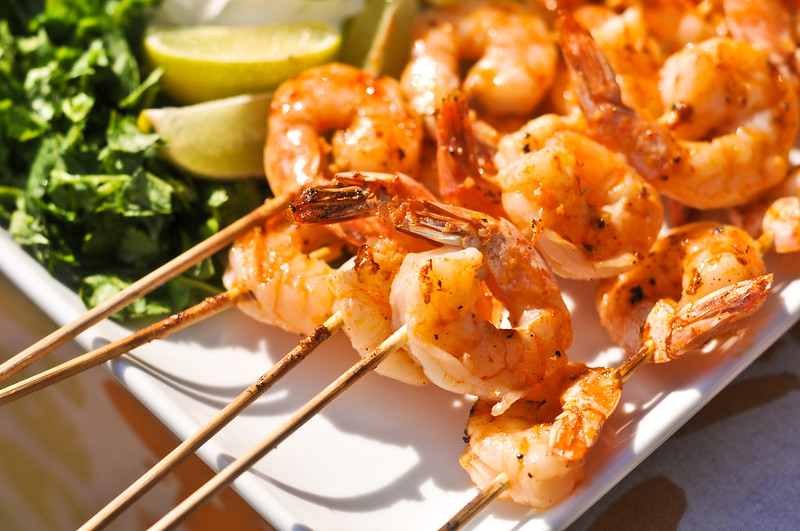 Second up were her favorite, shrimp! Shrimp are on of those crazy things everyone loves and I despise, and although I brought myself to do the fish taco, I did not partake in the shrimp fest going on. Grilled with a chipotle butter, they must have been super delicious, because these flew off the platter and I heard nothing but compliments to the chef for grilling a mighty tasty crustacean. 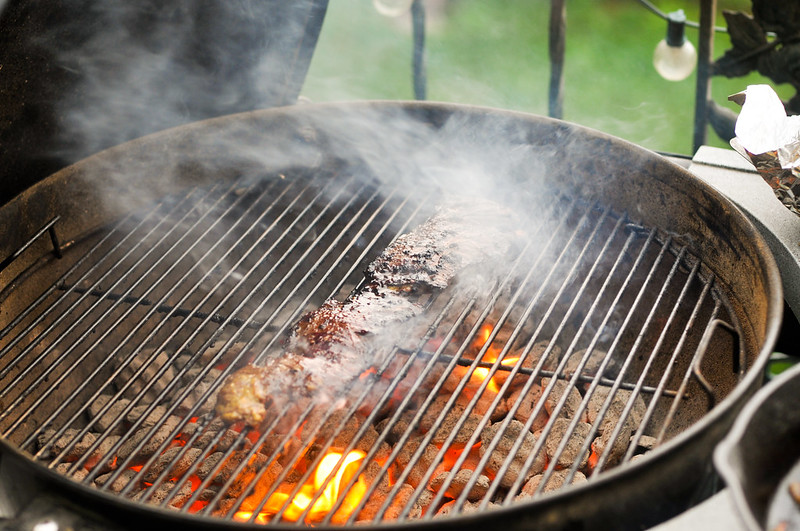 With a kind of Cali/Tex-Mex vibe going, I suggested the grilling of skirt steak for fajitas—something my wife really loves. It was a no-brainer adding this to the line-up, and they grilled up just as delicious as ever. 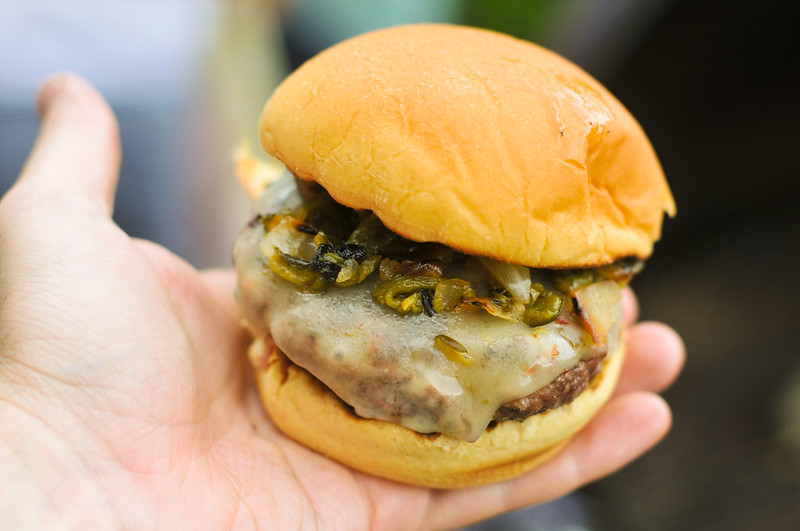 I was told go to the butcher and pick up a skirt steak, nothing more or less. As I waited for my steak to be trimmed, I could not keep my eyes off a beautiful, fatty piece of chuck—I just had to have it. I tried keeping my extra little purchase a secret, but as soon as I started grinding it to make green-chili cheeseburgers, the jig was up. Yes, in the end we really didn't need another meat on the menu, but the grilled onion and poblano mixture that topped a patty with melted pepper jack was so incredible that it was worth withstanding the evil eye I was given. 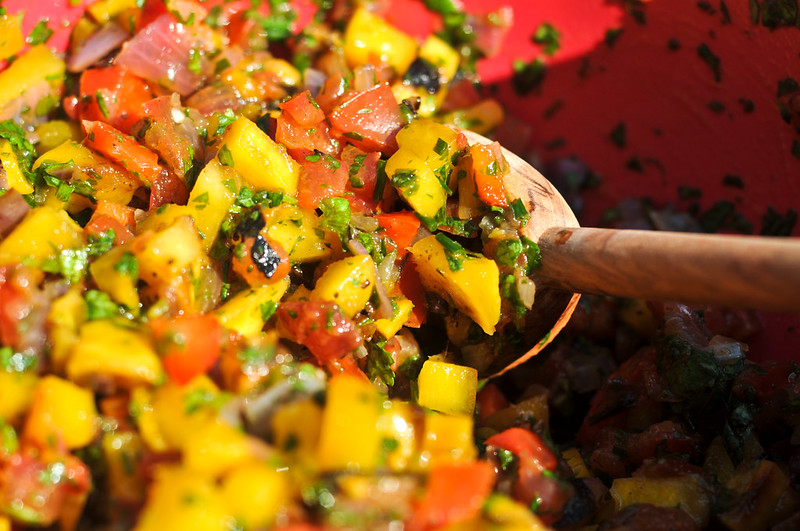 As a topping and side dish, we put together a mango salsa. Mango and red onion slices were grilled, then chopped and added to tomatoes, peppers, cilantro, chives, lime and orange juice to create the perfect accompaniment to the fish tacos, and an excellent salsa for chips as well. 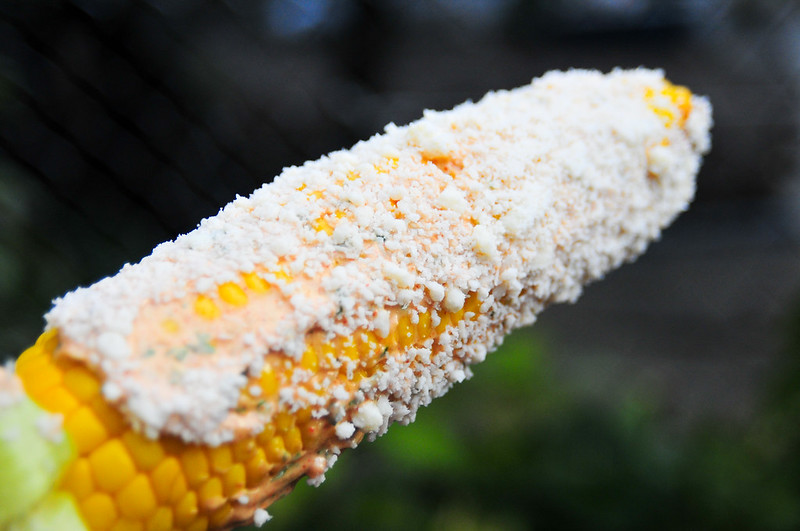 We made a large batch of Mexican-style corn, which is a personal favorite of mine and something we hadn't done this year yet. You can't go wrong with grilled ears slathered in a spicy mayo and rolled in cotija cheese. 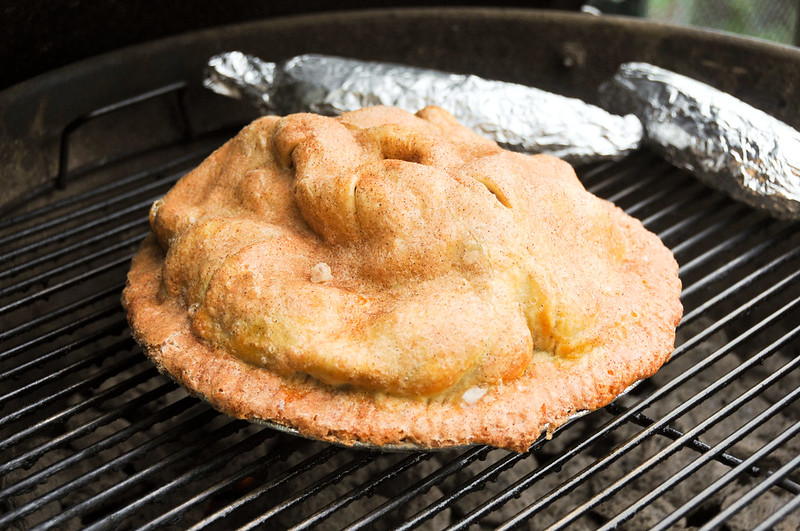 I had made an avocado ice cream as a fitting dessert, but it came out tasting a little off to me, so I enlisted Meatwavers Kevin and Lauren to cover my failure, which they did so well with this extra humongous apple pie! A little cold by the time we recovered enough from all the meat to finally dig into it, we decided to warm it up on the grill, which worked perfectly to get a nice warm cake to be served a la mode. 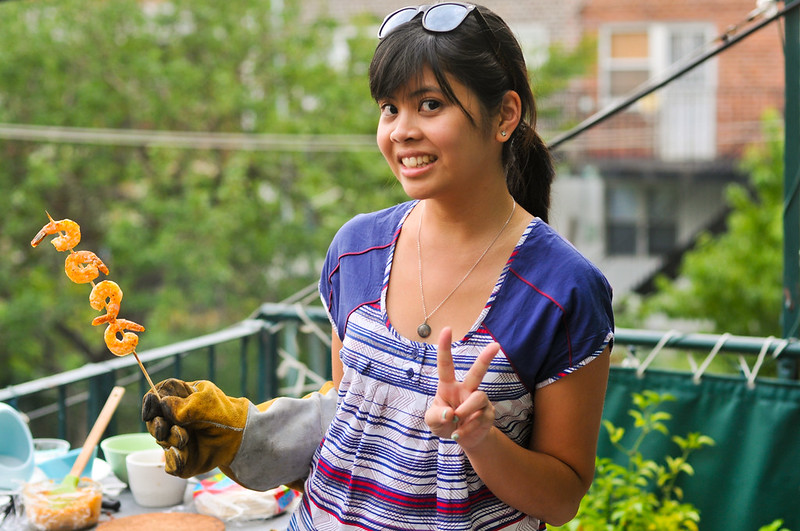 Here's the lady of the hour. Without her, this Meatwave would have never happened and the summer would have come and gone with no seafood ever gracing the grill. She did an outstanding job running the show, so much so, I may have to make more Meaterial Girls, giving me more opportunities to kick up my shoes and just enjoyed the food. 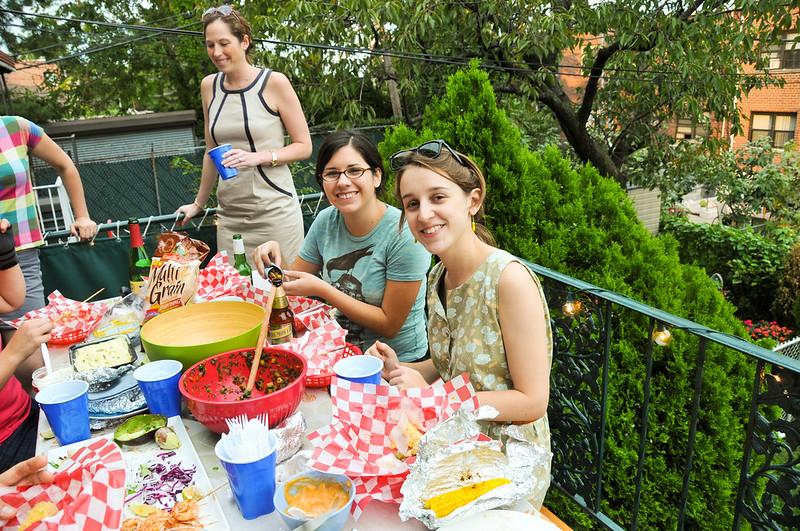 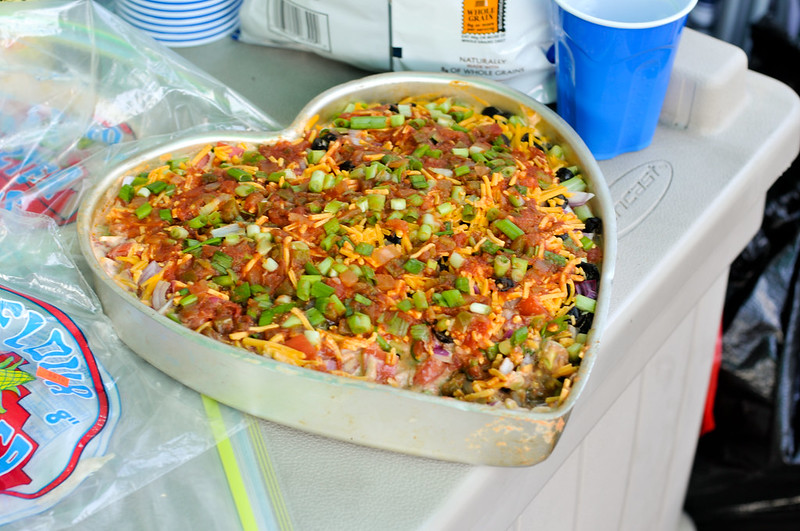 With had a slew of brand new Meatwavers this weekend, including Liz, who brought along her two excellent roommates. As I said earlier, ladies love the meat, and these three only went to prove my point. They also brought along an huge heart shaped bean dip, immediately winning over all Meatwavers. 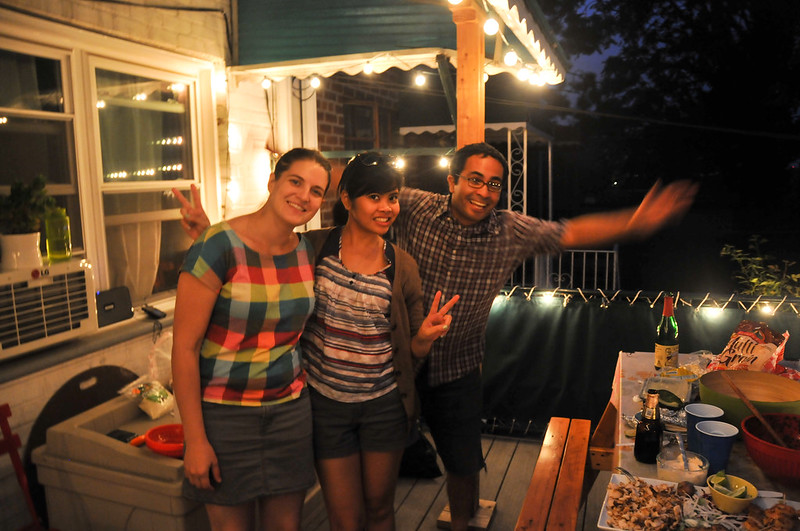 It's sad to think the Meatwave season is coming to an end, but there's no denying it. Most photos in the dark from earlier in the season happened after 9pm, but sadly, it's only 7:30pm here. The days are getting shorter, the air is cooler, and that means there's only one Meatwave left to finish us off before we move into hibernation mode. Luckily we have truly excellent folks like Lindsay and Brandon here to help usher out another great season in style.