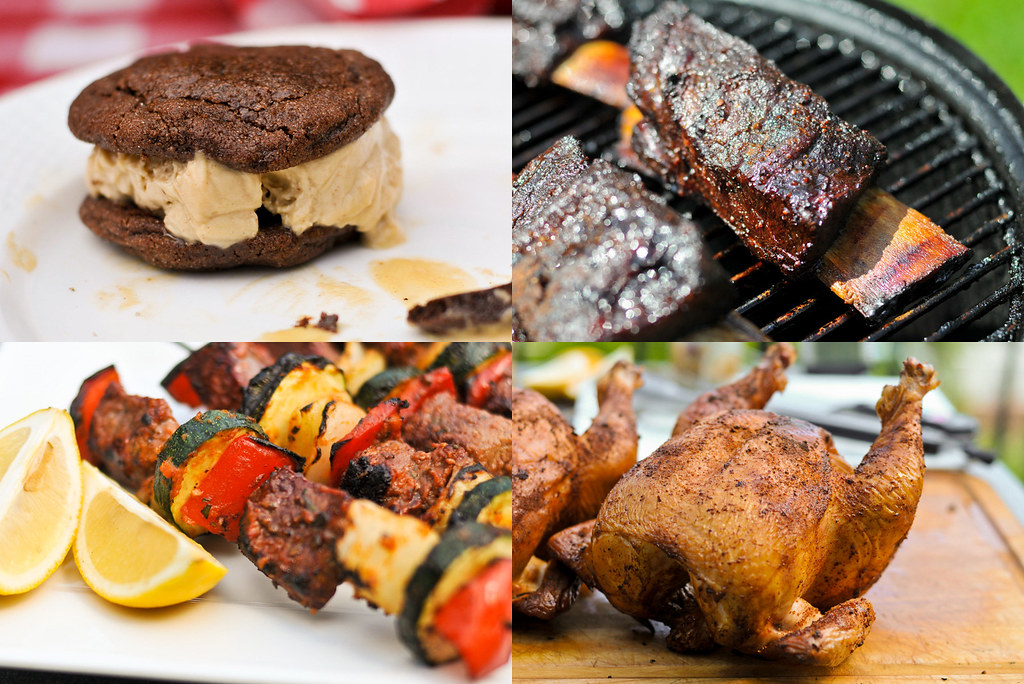 In the past, the Meatwave seasons always seemed to be a mix of peaks and valleys. After the initial excitement of the first Meatwave or two, things tapered off, leaving intimate occasions that I could take a more relaxed approach to. This season, though, started in full force and hasn't let up, which is totally thrilling. While I was expecting a smaller crowd for the mid-season Meathenge, it quickly became another one for the record books, with a mix of new and old faces and more beef than I think the Meatwave has ever seen before. 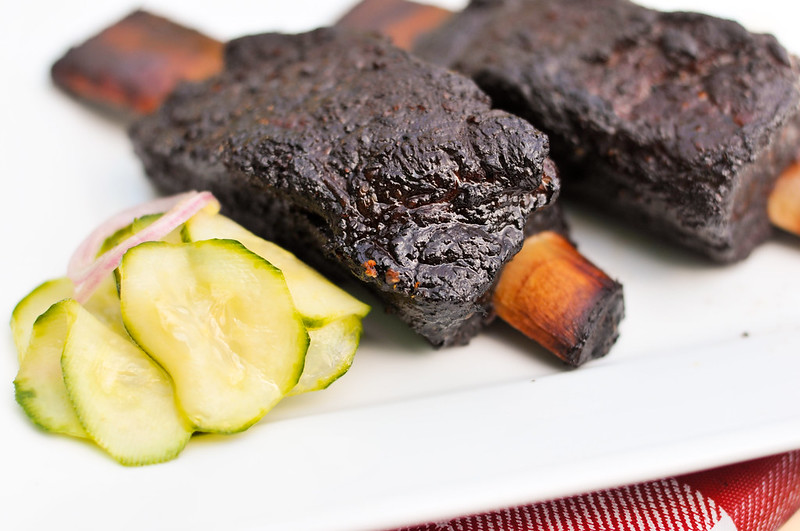 That beef mostly took the form of short ribs. After having some killer slow smoked short ribs courtesy of Meatwaver Nick last week, I had an itch to make them myself. I picked up 7 large ribs Friday night, another 8 the next day, and fearing that still wasn't enough, an additional 4 Sunday morning. They were rubbed down with a salt and pepper rub, then smoked at 225 degrees over hickory for 5 hours. Tender, smokey, and beefy, these were a hugh improvement over my earlier attempts, and with only 1 lone rib left at the end of the day, they were definitely a Meatwave hit. 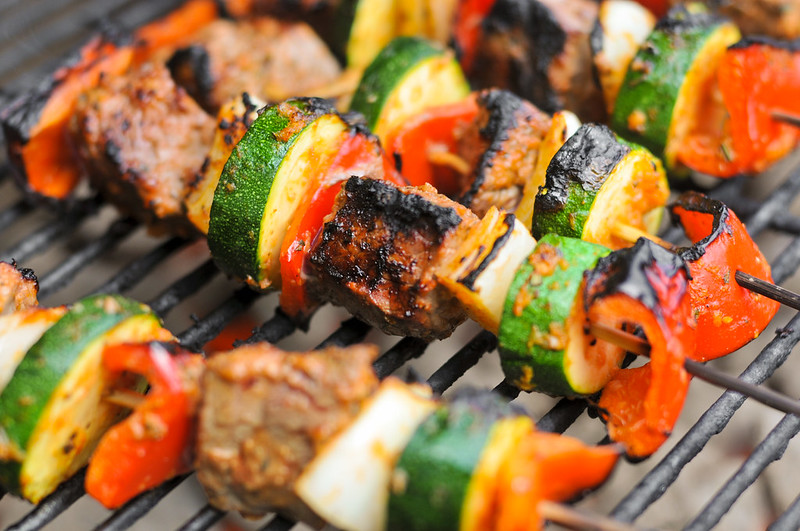 Next up were these garlic, lemon, and rosemary beef kabobs. Two pounds of sirloin was cubed and marinated, then skewered along with zucchini, onions, and red pepper. While the flavor was excellent, due to some excess fat running throughout my piece of sirloin, the actual meat was hit or miss, with some pieces being a little tough to chew. Given a better piece of beef, there would be no holding these back. 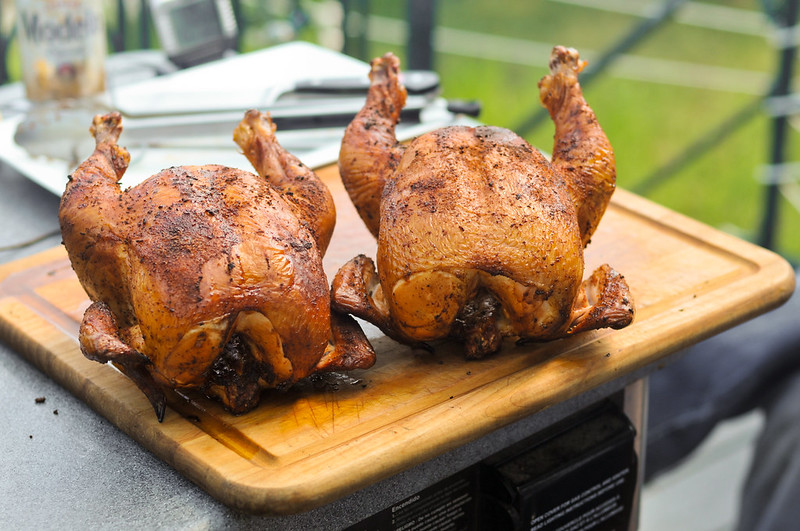 As I was expecting a small crowd, those two beef dishes were all I really had planned. In a panic that was not going to be enough to satisfy the ensuing crowds, I grabbed two chickens Sunday morning, quickly brined them, rubbed them down, and roasted them vertically over a beer can. These were just further proof that you can't go wrong with beer can chicken—they were the incredibly moist and flavorful, rightfully disappearing at a much faster rate than those beef skewers. 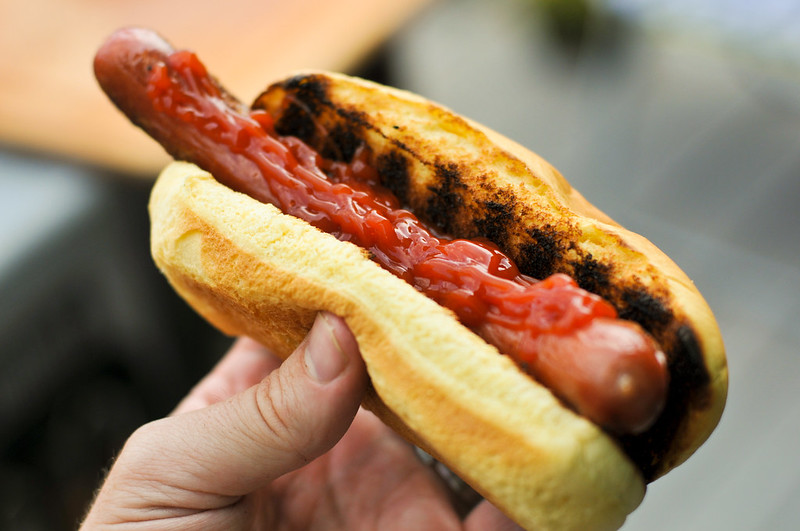 At least in early summer, the supermarket hot dog section swells, which includes one true great that is usually absent—natural casing Nathan's. I always buy a bunch and freeze them just to have on hand, and I defrosted a package for Meathenge (still worried ribs, kabobs, and chicken wasn't enough). In the age old adage, "If there's meat, they will eat it," my over stuffed minions seemed all but ready to call it day when I put in a call for hot dogs. While some couldn't muster the energy to inject themselves with more hot beef, there were almost a package full of takers to make this the final meat of the day. 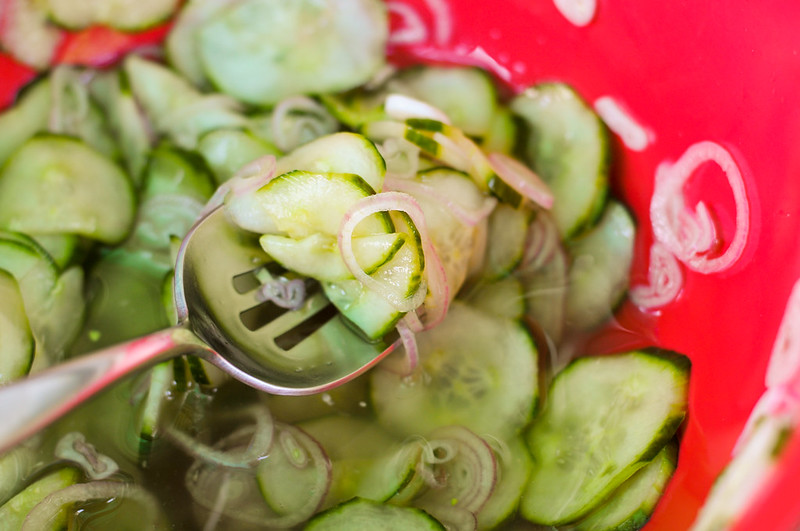 With all that heavy beef, I took a lighter approach to sides. One of my favorite sides is this Cool as a Cucumber Salad from Elizabeth Karmel. Thinly sliced cucumbers and shallots are dressed in a mixture of one part sugar to two parts vinegar plus a little salt. This minimal mixture makes an incredibly tangy and satisfying side, especially refreshing against those filling short ribs. 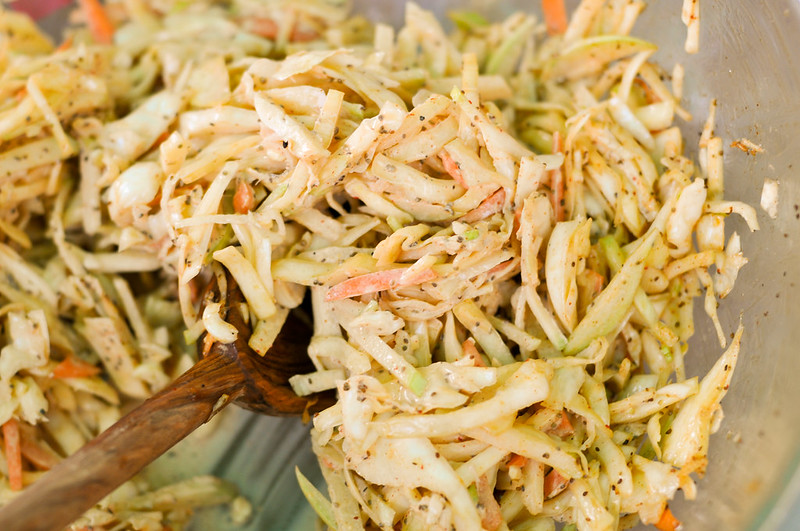 Suzanne brought this coleslaw for everyone to share. It brought up a rousing debate and fairly strong censuses that while mayo-laden slaws are what we mostly see, we all prefer the tangier, lighter vinegar or mustard slaws that are most common at the Meatwave and wish everyone would catch on to this truth of slaw. 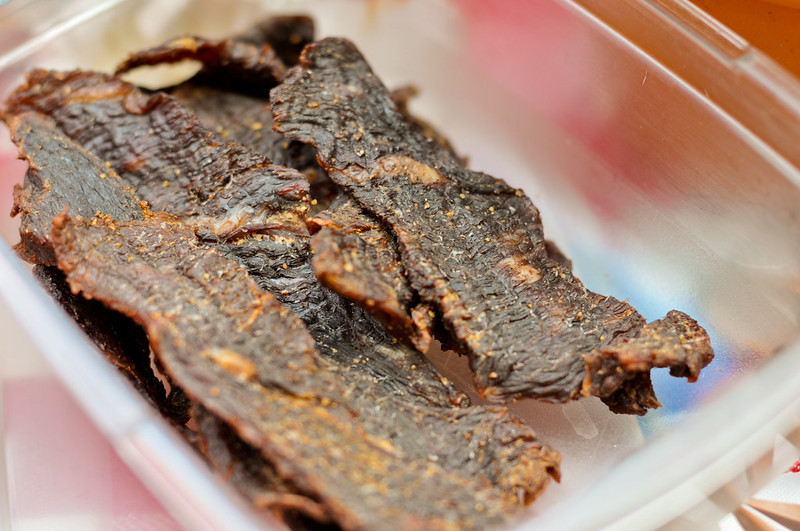 Suzanne recently got Jon a food dehydrator for his birthday, and while he initially broke it in with fruit, we all got to partake in his first attempt at beef jerky. An excellent crack at what is sure to become a new art for Jon, this jerky made from beef shoulder had a really great texture that wasn't too tough or too chewy, making a jerky that was a pleasure to eat. 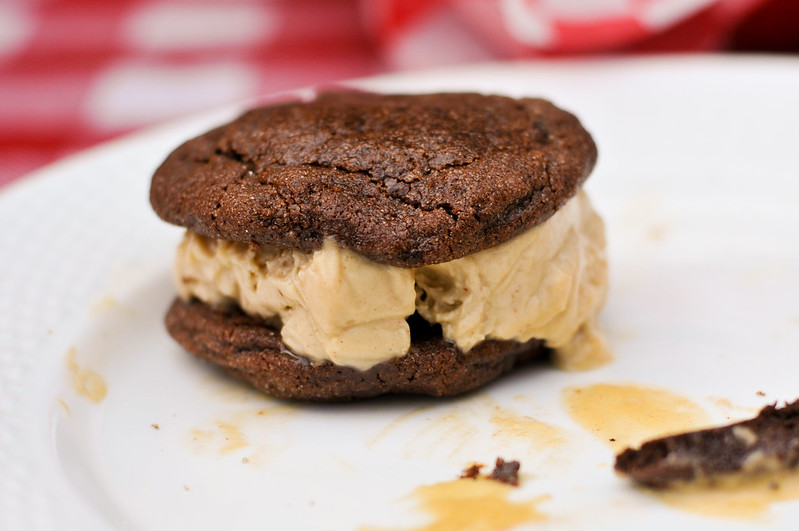 Although I love my meat, I actually spent most of my time making the dessert for this week—peanut butter ice cream sandwiched between two soft, chewy chocolate cookies. Rich beyond belief, but in the best of ways, these filled whatever extra space remained in the stomachs of the Meatwavers. 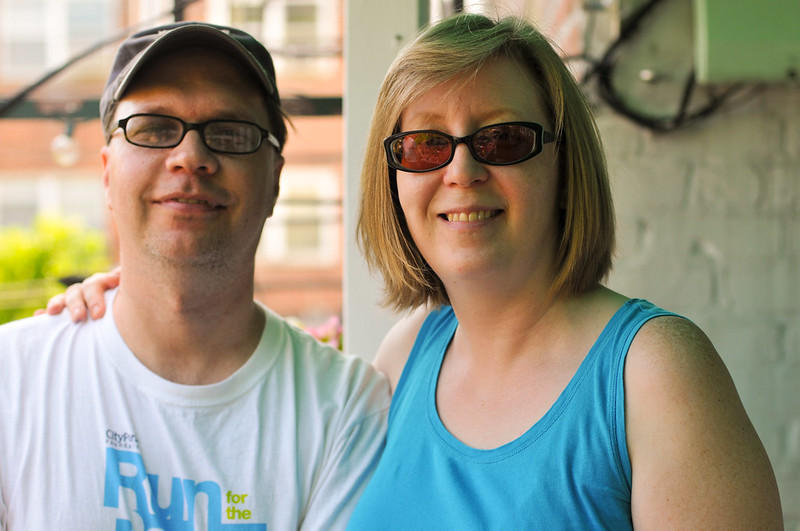 As always, the Meatwave welcomes a new face and Meg was a great one to have this week. She's the organizer of the CSA I used to belong to and also a hardcore Astorian. After being on the list for so many years, it was nice to finally have her come and enjoy the best part of the neighborhood—my backyard. 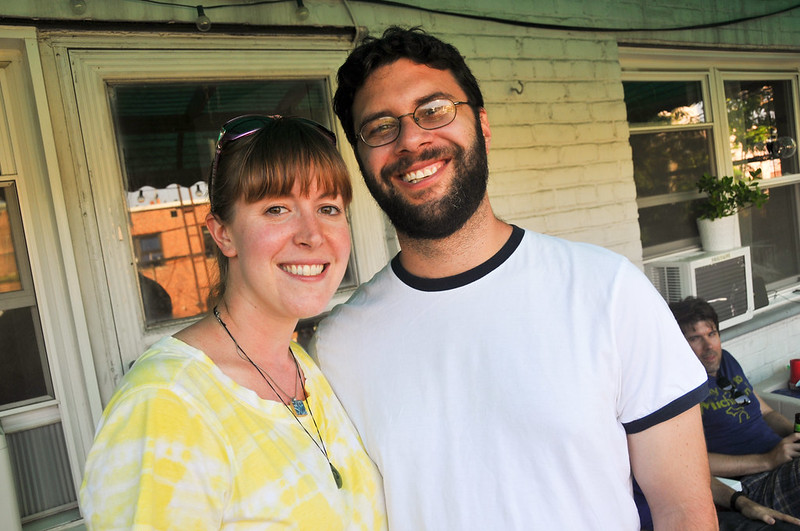 Suzanne and Jon have been wanting to come each weekend, but outside forces have kept them from their meat. Making it to their first Meatwave of the season and providing excellent food, we hope to see them more often as the summer goes on. 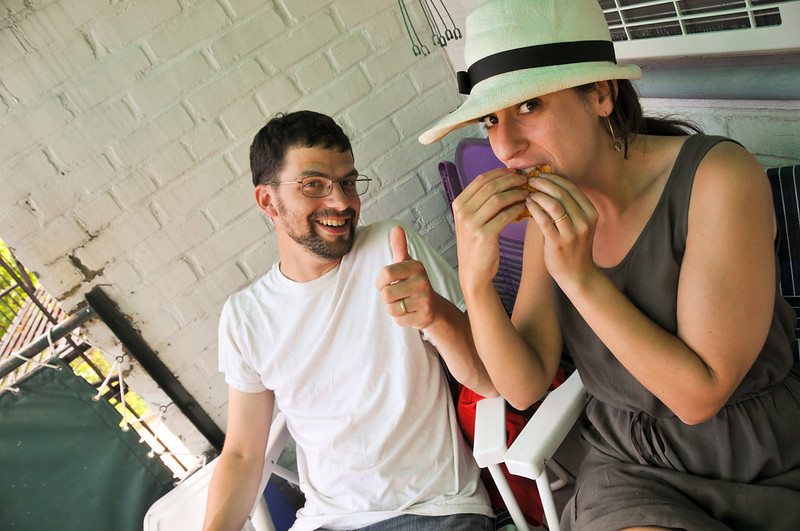 While Mike will probably win the best attendance record, his wife Amy was only making her first appearance this year. The best thing about this photo is that this pseudo-vegetarian is scarfing down a hot dog, a new favorite food of hers. 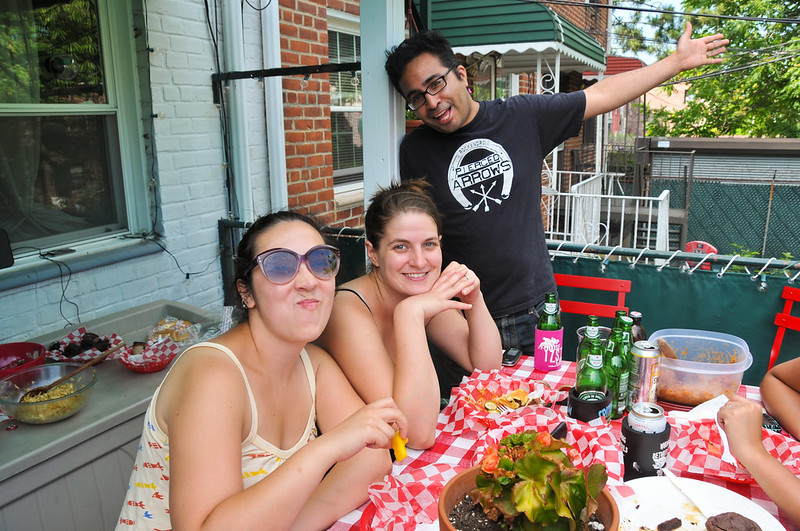 Now for the regulars, Kait, Lindsay, and Brandon, always bringing great life and even better food into the day. Without them, it just wouldn't seem like a Meatwave. 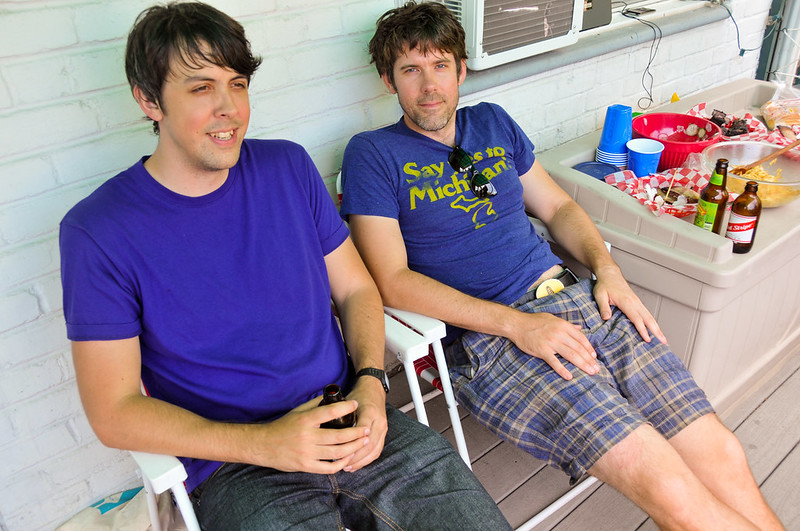 I'm going to dedicate this Meatwave to Matt. He showed up with a swollen purple toe, broken on the way over, but he wasn't letting that get between himself and the meat. My hat goes off for that showing of pure dedication, and while it may have been wiser to seek medical attention, I think in the end we all know he made the right decision.