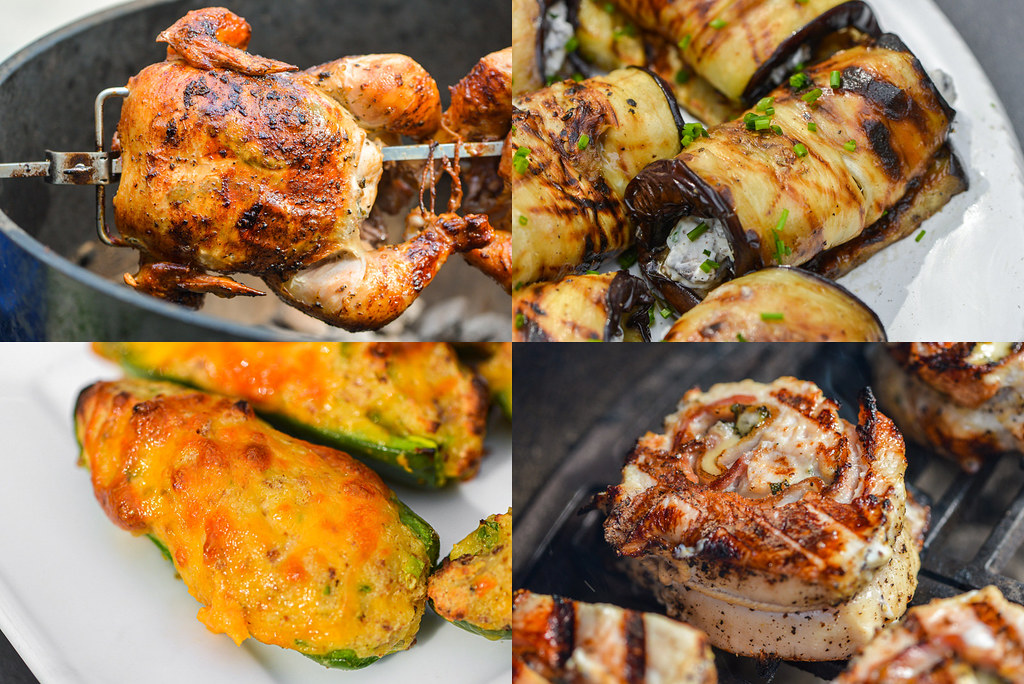 The month of September in 2022 pretty much was my return to a pre-Covid schedule. It started with a barbecue competition on Labor Day weekend that went into a vacation followed by work travel, two holidays with family and friends, and then another short vacation. In between all that I was supposed to host a Meatwave too, but that got rained out by Hurricane Ian, and I think if I didn't end up having that downtime weekend, my body and brain may have shut down completely. With the onset of a long stretch at home, I felt much better prepared to take on a cookout and I couldn't have asked for better wather as my friends and family gathered to enjoy a journey into Meatland. 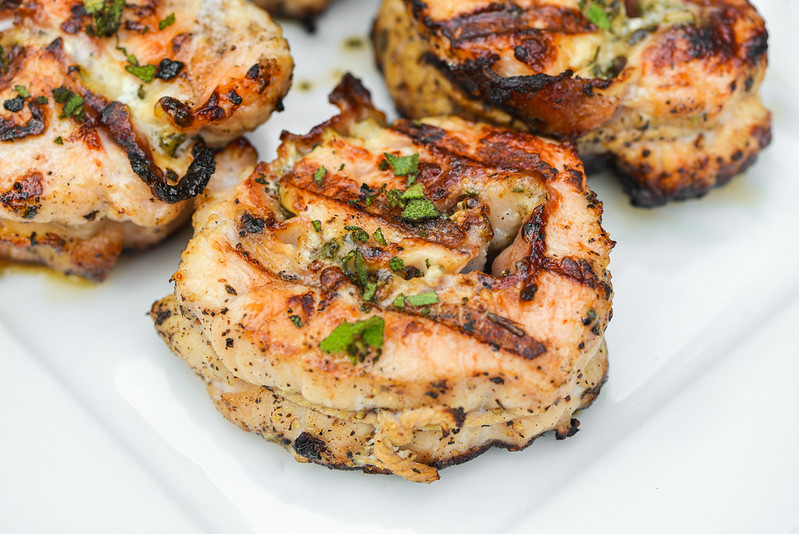 Turkey almost always makes at least one appearance at The Meatwave this time of year as I work on Thanksgiving-appropriate recipes. I've done some many turkey variations at this point that I didn't think I could surprise myself with something new and exciting, but that's exactly what I did with these turkey pinwheels. I wasn't even sure these bacon, sage, and cheddar-stuffed turkey breasts would hold together well enough to grill, but that proved not to be an issue. I also worried that the cheese would completely melt out while cooking, and while some did, it also caramelized on the outside of the meat and added a crazy delicious dimensions to an already very tasty and juicy turkey incarnation. 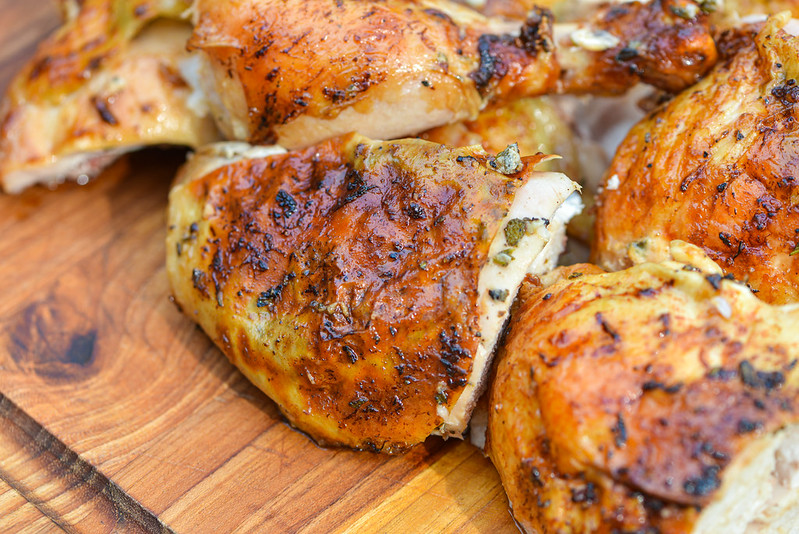 It had been awhile since I'd busted out the rotisserie and the fall weather had me in the mood for some roast chicken, so I combined those two things to make these garlic and herb rotisserie birds. A garlic and herb heavy compound butter was spread both under and over the skin prior to roasting, and that left the chicken incredibly rich and flavorful. Pair those traits with that self-basted, golden brown skin, and this dish brought me to chicken heaven. 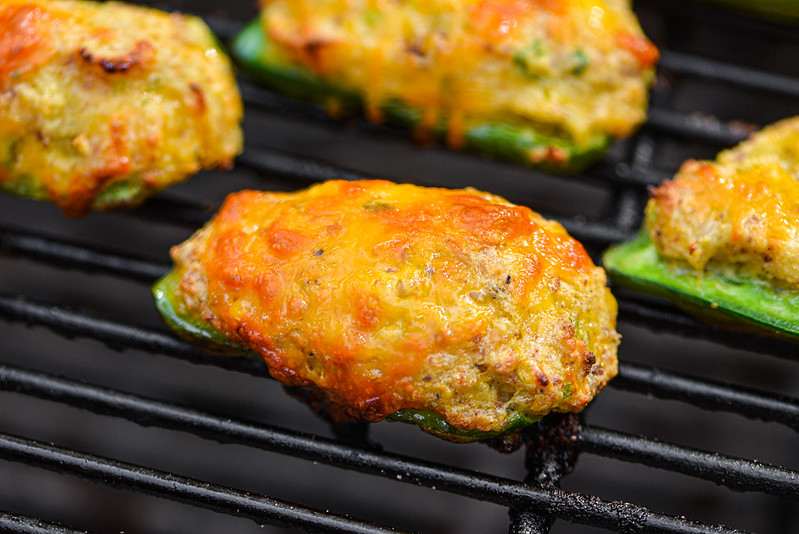 Continuing a thought process along Thanksgiving lines, my mind often turns to my favorite cornbread stuffing that's a must at my holiday meal. Last year I used that as an inspiration to make cornbread-stuffed mushrooms that worked incredibly well, so I went for repeat this year, but swapped out the mushroom caps for jalapeños to create cornbread-stuffed jalapeño poppers. With a good sweetness to contrast with the spicy jalapeños, this was a winner in my book, but I made another version that even topped these. 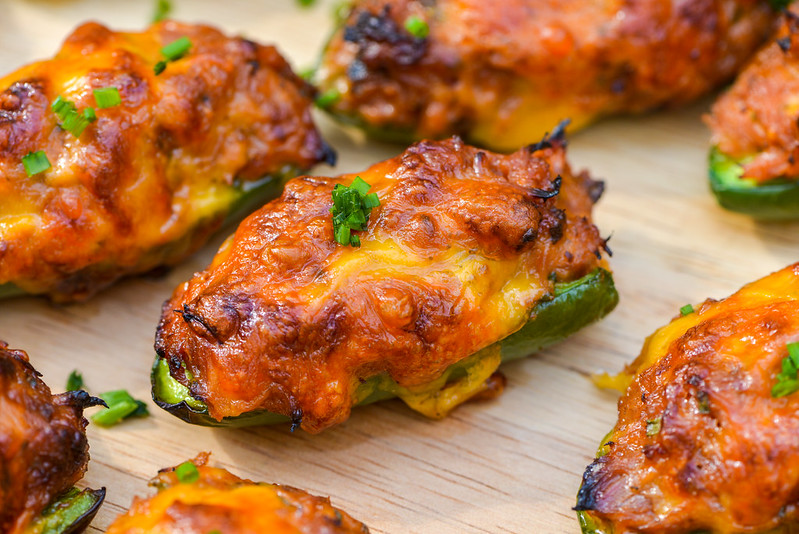 And those were pulled pork jalapeño poppers. I still had a lot of leftover pulled pork looking for a purpose, so I defrosted that and combined the smoked meat with barbecue sauce, cream cheese, and cheddar before stuffing the filling into halved jalapeños. With a cheddar cheese crust that caramelized on the grill, these poppers were loaded with flavor that was both in your face, but also tasted like they were hitting the right notes when taken altogether. 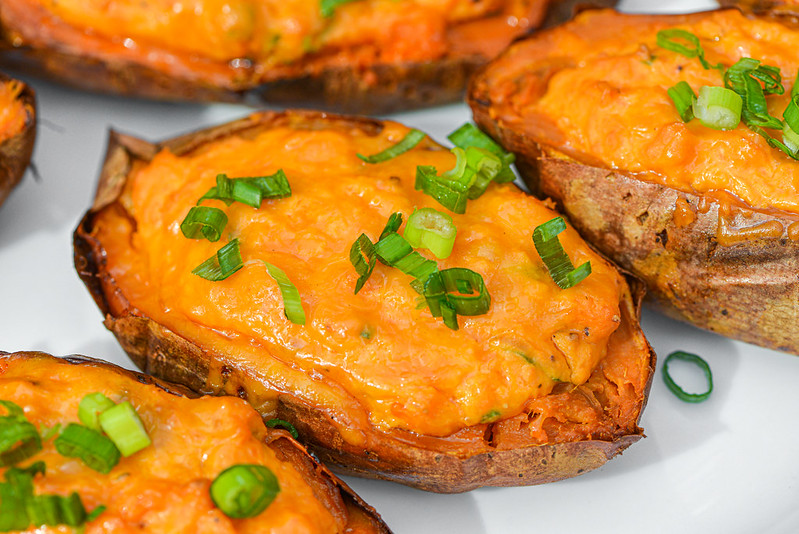 I also can't let a fall go by without a new sweet potato recipe of some sort, and this time that title was taken by these twice-baked sweet potatoes. One of my guests inquired on why they where so good, and that was thanks to a hearty layering of diary fats mixed into the flesh—it included cream cheese, sour cream, butter, and cheddar cheese. I was using the smoker for the second cooking of these, but was running it hot rather than low and slow, and while removing the spuds for plating, the entire smoker spontaneously became engulfed in flames and I panicked, not because I suddenly had my hands in an inferno, but because I wanted to save those potatoes before they burnt to a crisp. Luckily most were fine and the main casualties of the fire were my welding gloves and some singed hair. 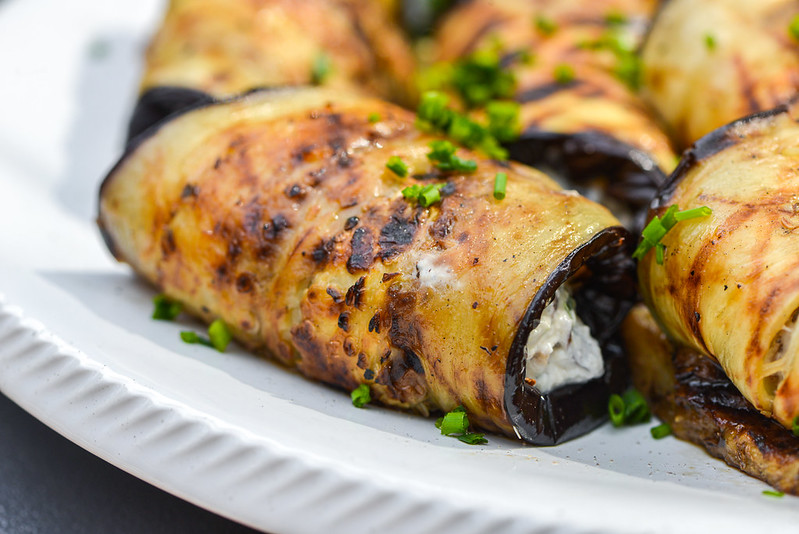 I've been very mindful to craft menus that will leave meat eaters and vegetarians equally stuffed, but I wasn't offering up anything that substantial that didn't have meat in it originally, so I added these 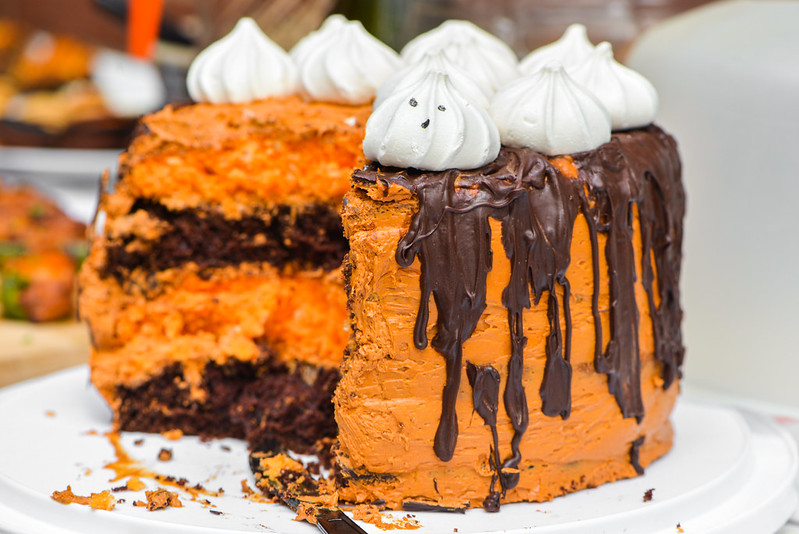 With Halloween just around the corner, everyone's dessert game was on point at this Meatwave, but two things really stood out, starting with this insane quadruple layered cake with buttercream frosting and meringue ghosts baked by Juliana. As delicious as this cake was, the best part of it may have been when one of our youngster guests asked for "a piece of cake with garlic." 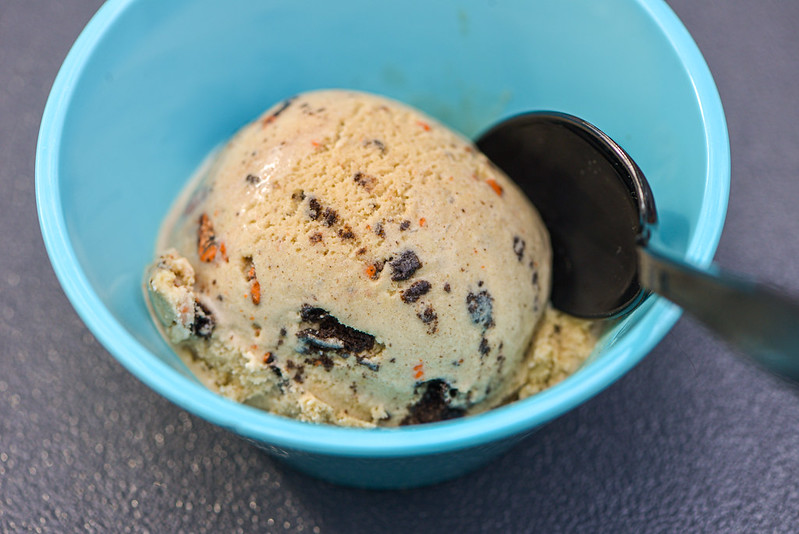 Second special shout out goes to Benji's mint cookies and cream ice cream that busted out the orange Halloween Oreos, which a fall favorite of mine even if they're really not different than regular Oreos besides the color. 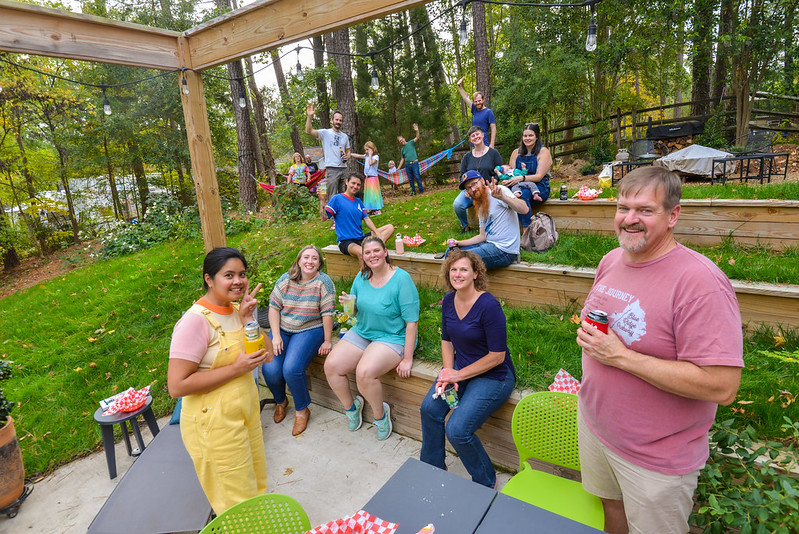 We had a pretty good crowd on hand to partake in all this deliciousness and here's a good sampling of those in attendance. With my exhaustion from lots of recent travels and work, I toyed with the idea of calling this Meatwave the end of the season, but I felt reinvigorated after sharing the day with so many good friends and am now totally up for one last cookout before calling the 2022 season complete.