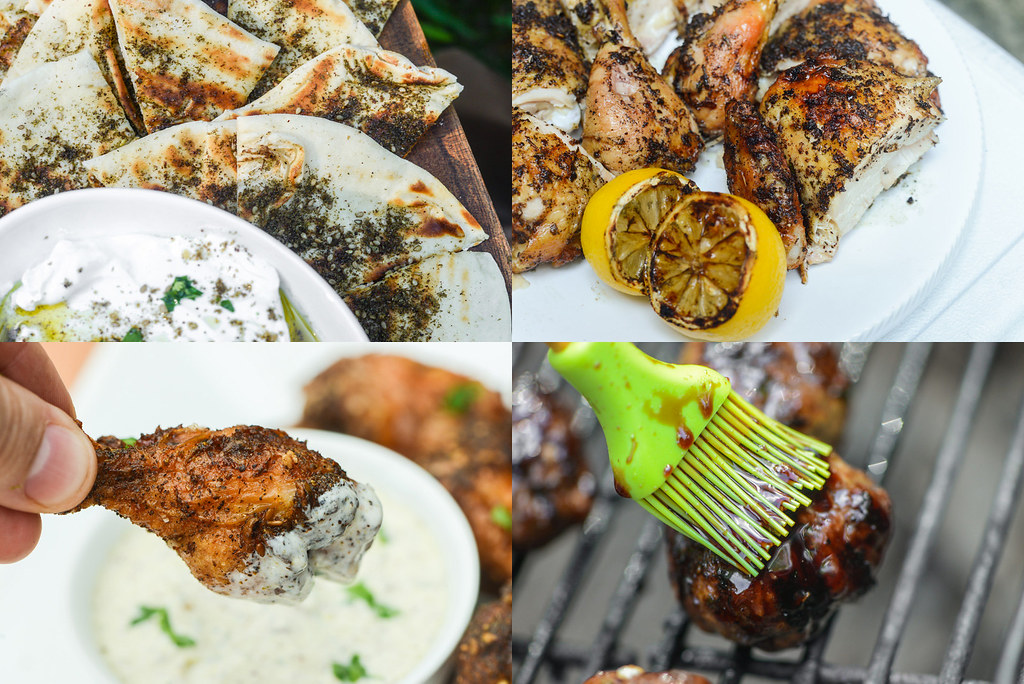 Since moving to Durham, I've adjusted the Meatwave schedule to mostly happen in the shoulder seasons of spring and fall, because let's face it, it's just too damn hot and humid for it to be pleasant to sit outside for hours on end in the dead of summer here. This year I got tripped up though by some unusually cold and wet early spring months that made me fall behind in my ambitious meat-related plans, so to make up for lost time, I decided I needed to continue hosting no matter what the weather was. This led me to implementing some new Meatwave features to beat the heat, along with devising a menu of Middle Eastern-influenced food that would be fitting for the scorching weather. 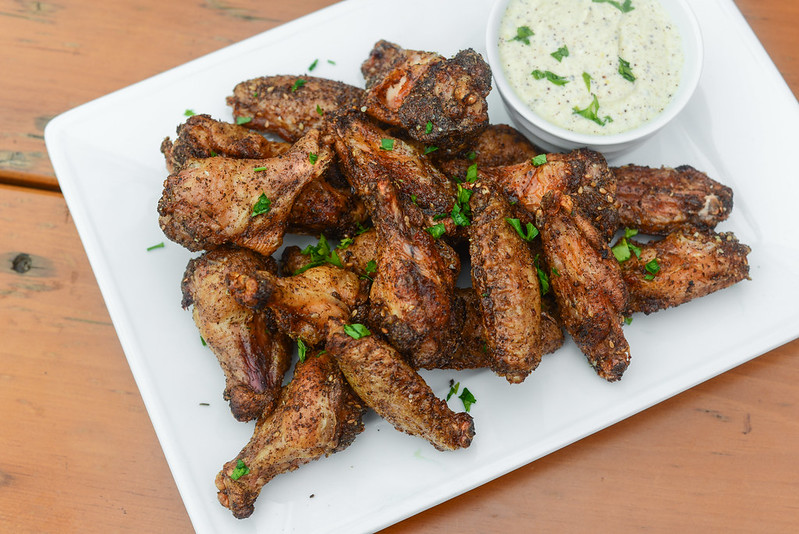 This first thing to come off the grill were these za'atar wings. This thyme-based spice is incredibly delicious and I've used it in many, many ways in the past, but never for wings. I feel like za'atar is the little spice that could—it just keeps chugging along with impressive results no matter how it's used. These wings were wonderfully crispy with a strong earthy and herbal flavor that was contrasted with a light and bright lemony finishing sauce. I also provided a yogurt-based dip that made them all the better. 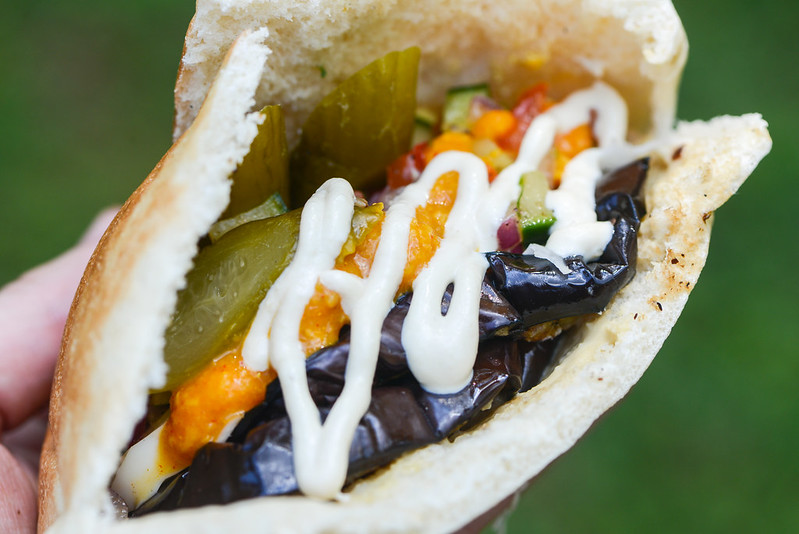 Next up were these sabich pitas. This Israeli-Iranian invention usually starts with lots of fried eggplant, but I, of course, used grilled eggplant, whose creamy texture and charred flavor was great with the symphony of other ingredients that were also loaded into the warm pitas. This included tangy seasoned cabbage, fresh Israeli salad, hummus, pickles, spicy pickled mango sauce (aka: amba), and a garlicky and lemony tahini sauce. 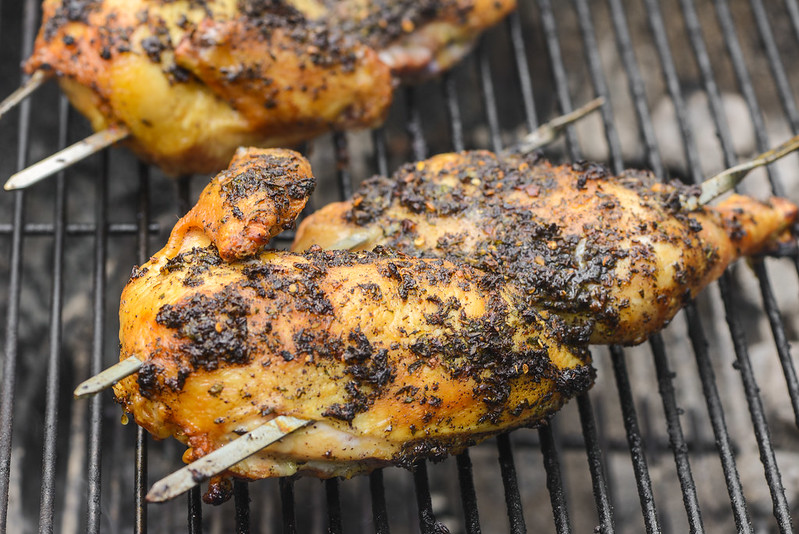 I was already working with an ingredient list that heavily featured lemon and herbs, and had the idea to make this lemon, herb, and sumac chicken to make use of stuff I had on hand. This recipe was really the afterthought of the day—devised more because it was easy than an other motivation—but the end result was crazy delicious. The chicken had a great bright and lemony flavor that was enhanced by a generous portion of sumac, and then an herb coating that add nice bits of crispness after being roasted on the grill. Whole chicken isn't always the most consumed item at a Meatwave because it represents a pretty big commitment when there's so much on the menu, but this dish surprisingly ended up disappearing pretty quickly. 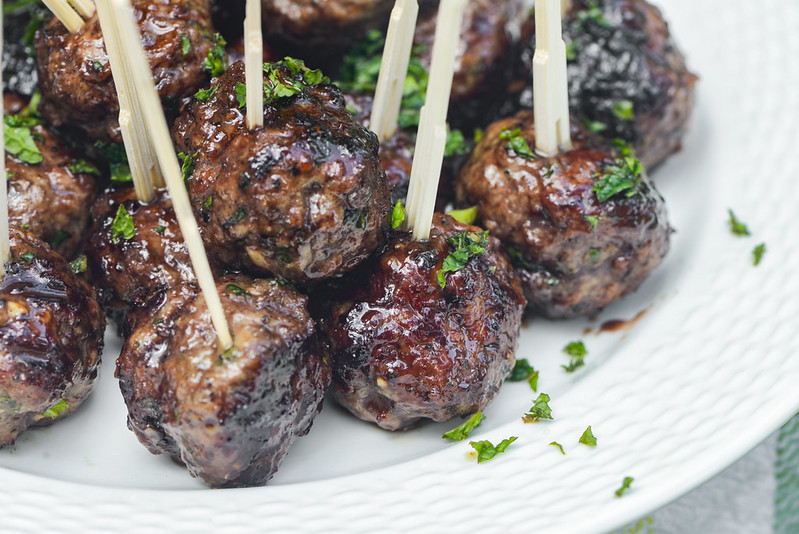 I've had the idea for these lamb meatballs with a pomegranate glaze ever since Meatball Mania! last April, but they didn't make the final cut then. This seemed to be the right theme to finally get them on the menu, and they represented something a bit different from what was an otherwise pretty light and refreshing spread. Lamb, of course, provided an immense flavor that was seasoned well with mint, parsley, and garlic. Then the strong and thick pomegranate glaze introduced a complimentary fruitiness and sweetness that paired really well with the meatball. 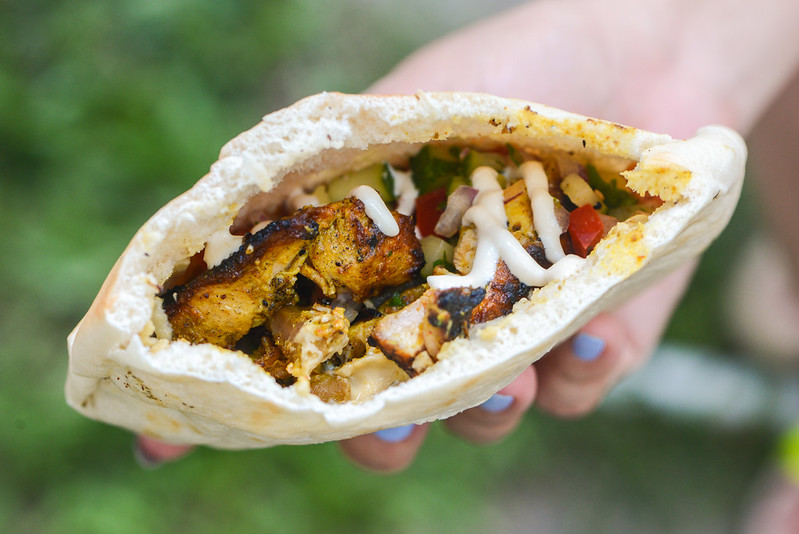 For me personally, I couldn't do a Middle Eastern theme without my favorite of the regional foods—shawarma. I made some adjustments and improvements to my past shawarma marinade, which resulted in even better seasoned and juicier meat. That earthy spice really stood out, even when stuffed into pitas with hummus, Israeli salad, and tahini. 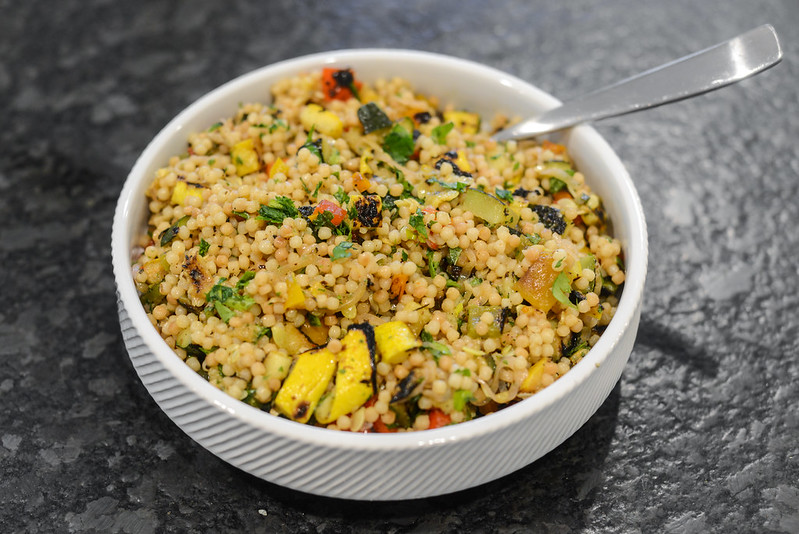 As a side, I put together this Israeli couscous salad, which was comprised of grilled zucchini, yellow squash, and bell peppers along with pickled shallots and a lemon vinaigrette. It captured a nice essence of summer while fitting into the overall menu seamlessly. 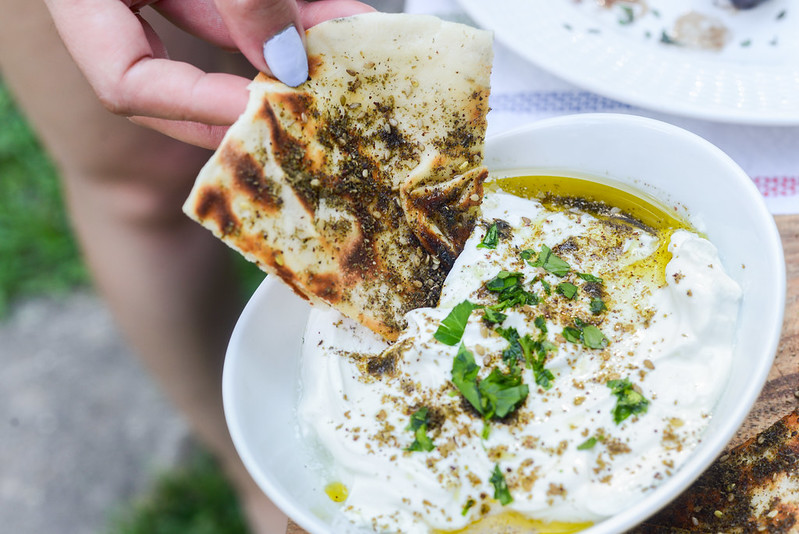 And last, but not least, was za'atar bread. How can you not love fresh grilled bread? And it's even better when coated with za'atar! I meant to make these flatbreads at the begining of the day, but time slipped away and I didn't get to them until the very end, when I thought everyone would be too full to partake. But nope, fresh bread is irresistible and this stuff was gone almost instantaneously, even with a thinned crowd and most everyone suffering from a meat coma. 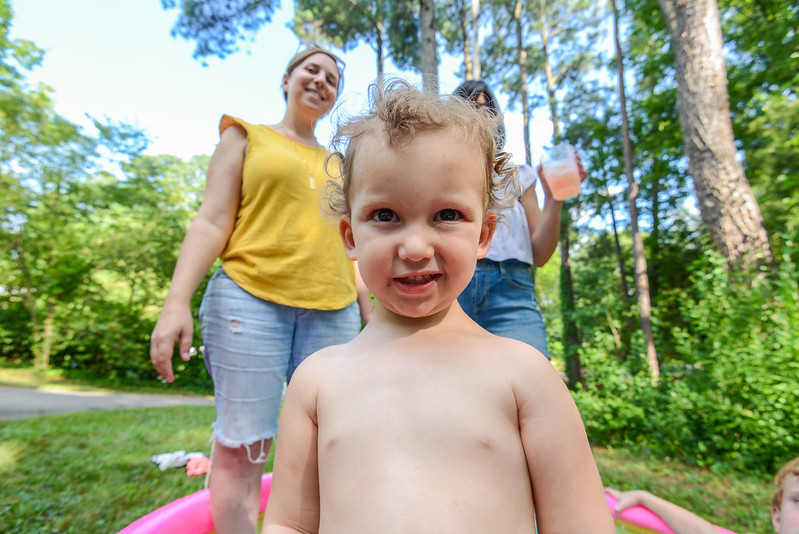 My last Meatwave was so big and intense, I missed taking photos of the majority of my guests, but I made up for that this time by capturing just about everyone who showed up and also giving myself enough breaks to be able to enjoy their company. Here we have Neko cooling off in the kiddie pool we bought especially for this Meatwave, with Jenny and Kristin also getting there feet wet in the background. 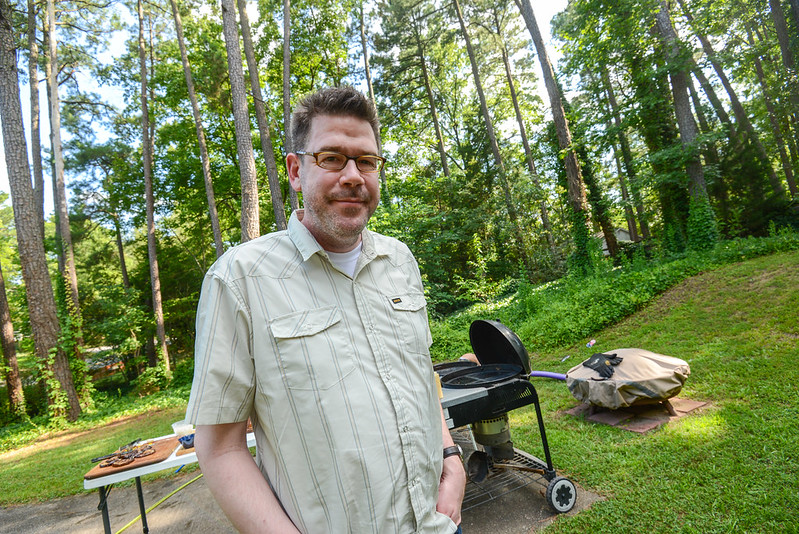 Andrew made it out to enjoy the feast, helping keep our beer supply flowing, which we've been doing better this year than ever before. 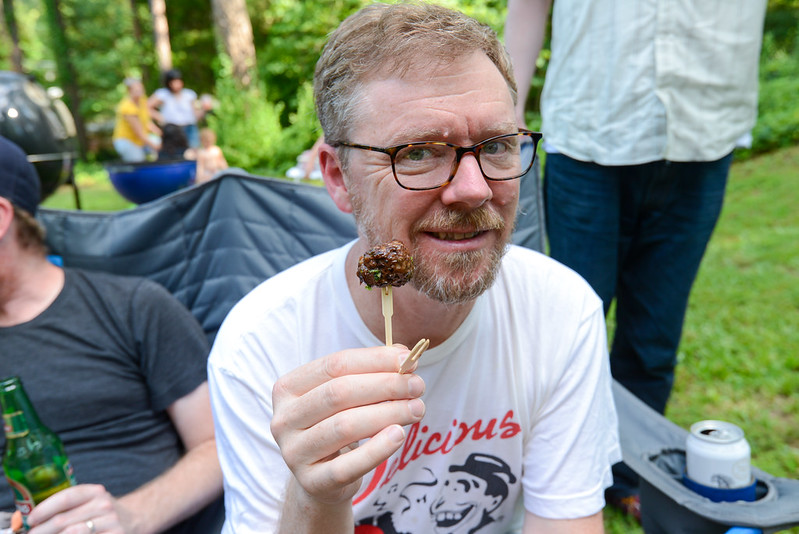 Steve is still going to that perfect attendance record, and also enjoying a lamb meatball... 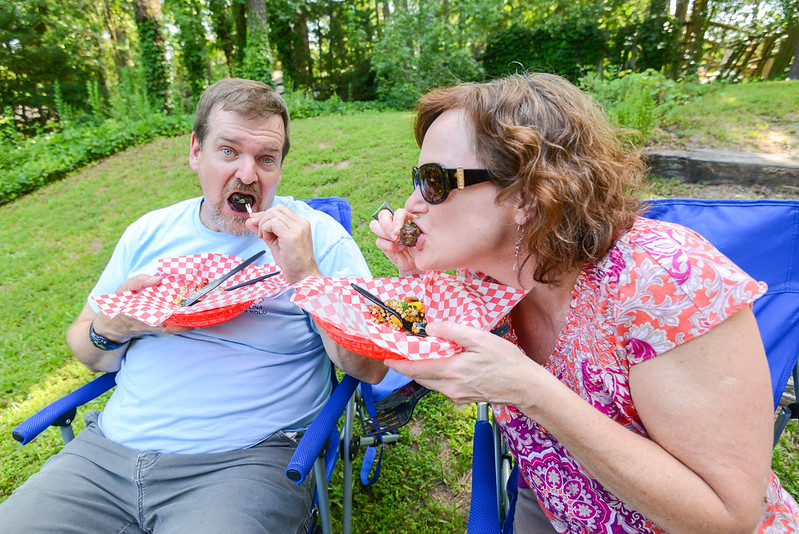 But maybe not as much as Chris and Sue are here. Sue let me know lamb is one her favorite meats, which made me happy because it always seems to be a gamble on whether folks will really enjoy whatever lamb creation I'm cooking up. 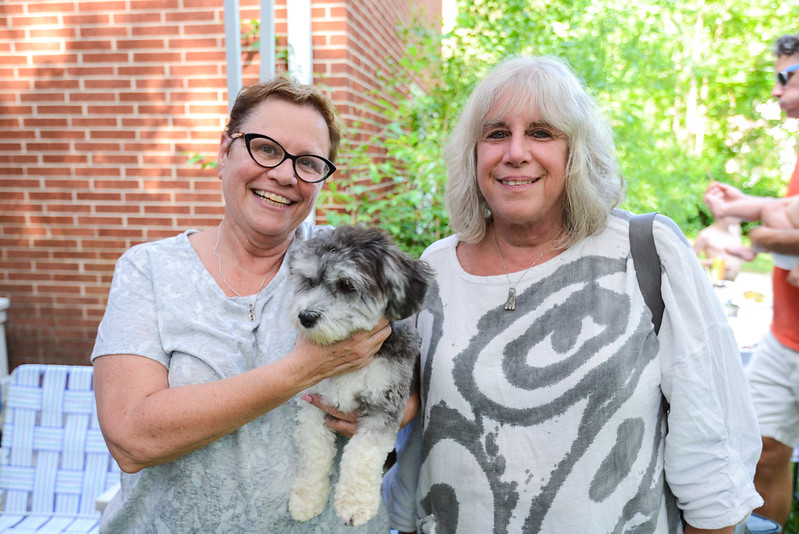 My Mom brought both Zora and her friend Susan. This day was originally supposed to be a private Meatwave for my Mom's friends to say thank you for assisting her while she recovered from an ankle replacement, but that plan fell off. So it was nice to be able to have at least one of her helpers get a meaty token of gratitude. 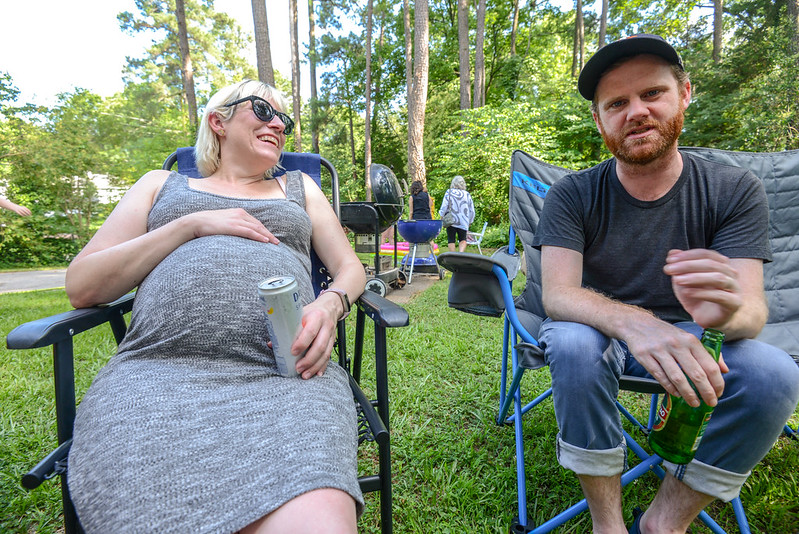 Leslie, sitting with Bryan, is just about done with creating the newest Meatwaver—by the time we have our next Meatwave, her little butterbean should be in the world (although probably not quite ready for attendance yet, but we'll see). 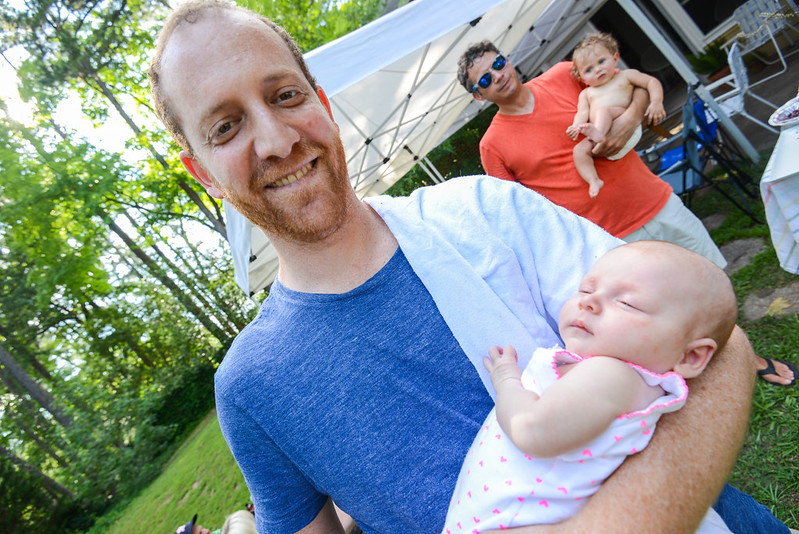 Gabe and Sarah brought along the newest Meatwaver, Aida, who I'm guessing is enjoying the day the best way she knows how—with sleep. I'm with you Aida, sometimes all you really want to do on a scorching day like this is lay down and close your eyes. 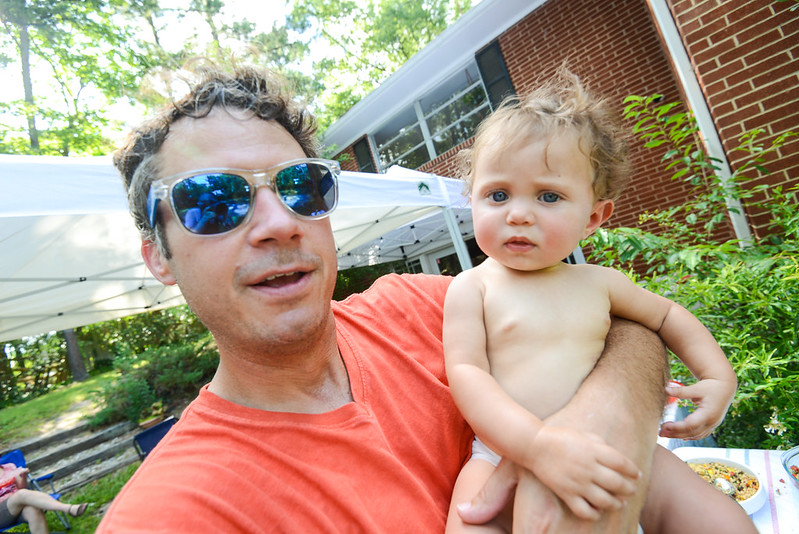 Next up is Eric and Bryce. The week prior to this Meatwave, Eric and partner Jessica hosted us at their homestead, and he has quite the beer set-up going. I had no idea he was such a brewmaster and I'm looking forward to trying more of his creations in the future. 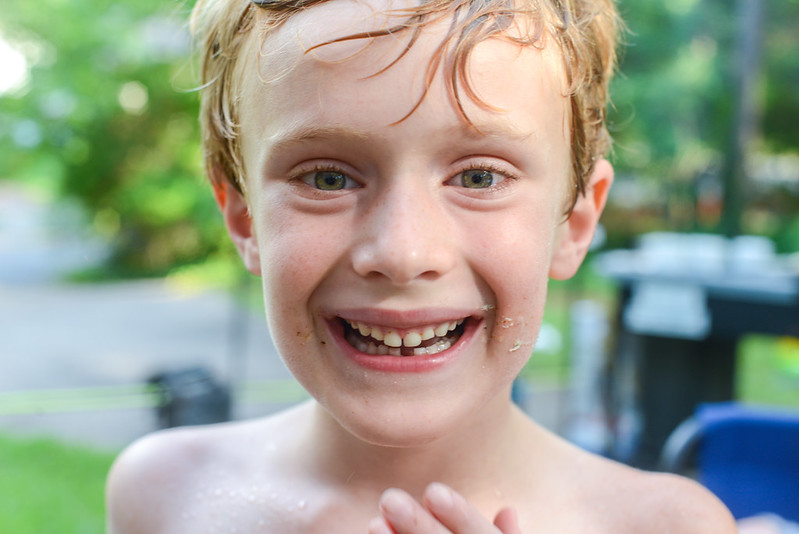 And last we have Benji bringing a Meatwave first—a lost tooth. Sometime close to the end of the day, his front tooth just decided to pop out and become fodder for an exchange with the tooth fairy. I wasn't quite sure what the going rate is for a tooth is these days, but Benji seemed to think it's about $500. Guess we'll have to wait until next Meatwave to see how that turned out for him, along with what new and amazing meats will enter out lives then.