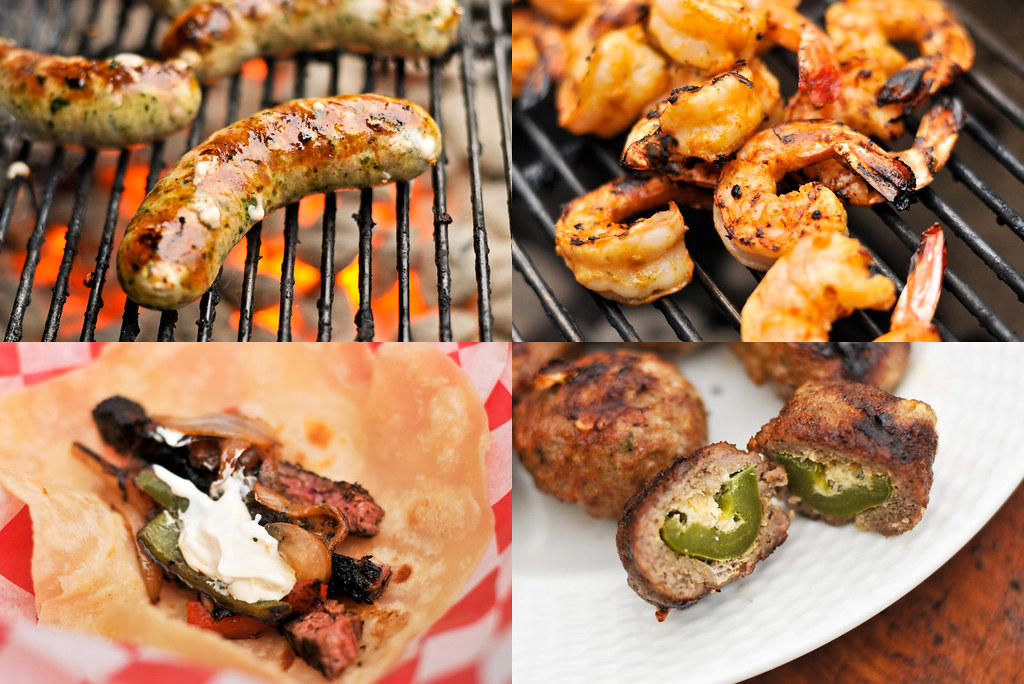 Now I don't necessarily condone polygamy, but if I had to marry a cuisine, I'd be double hitched in no time to Barbecue and Tex-Mex. Next to slow smoked meats, the fresh and vibrant flavors of Mexican and Tex-Mex have a stranglehold on my heart. That makes Cinco de Mayo my all time favorite eating holiday. It would make sense that the Meatwave should always be in celebration then, but due to weather and timing of the holiday, it never really worked out until this year—falling on a Saturday in conjunction with a 70 degree forecast. Although a somewhat impromptu start to the Meatwave season, Meato de Mayo pulled out all the stops for a fiesta of mega-proportions. 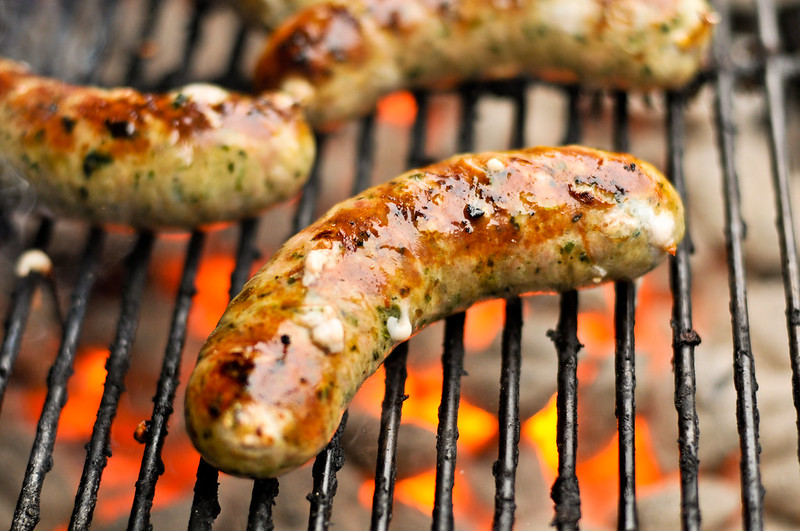 We have this sausage that thank in part for our early start this year. Over the winter I tried my hand at both regular and green chorizos. Both turned out beyond my expectations, but have just been sitting dorment in my freezer ever since I had my first taste. So with two bags of Mexican links all ready to go, it seemed right to bust them out for some Meato de Mayo action. 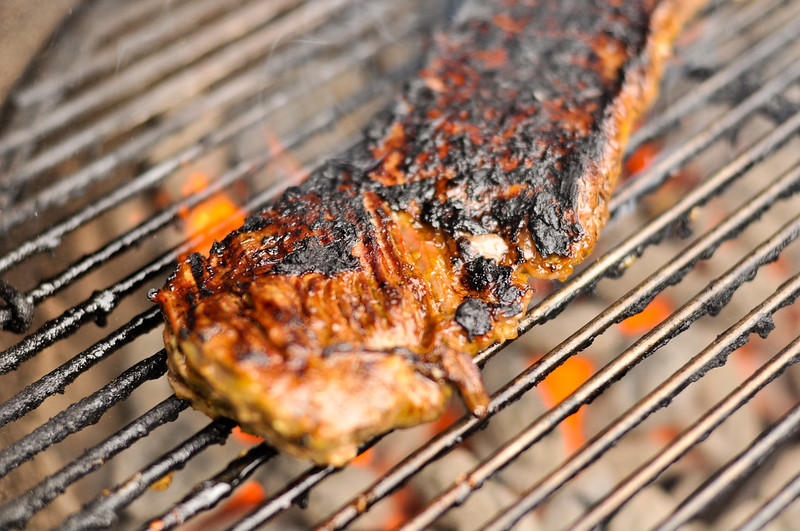 I think it's pretty much impossible for me to do any type of Tex-Mex party without fajitas. I've been using the same recipe for my skirt steak since the beginning of this blog and it's hasn't failed me yet. An incredible steak all around, it turned out especially well here. 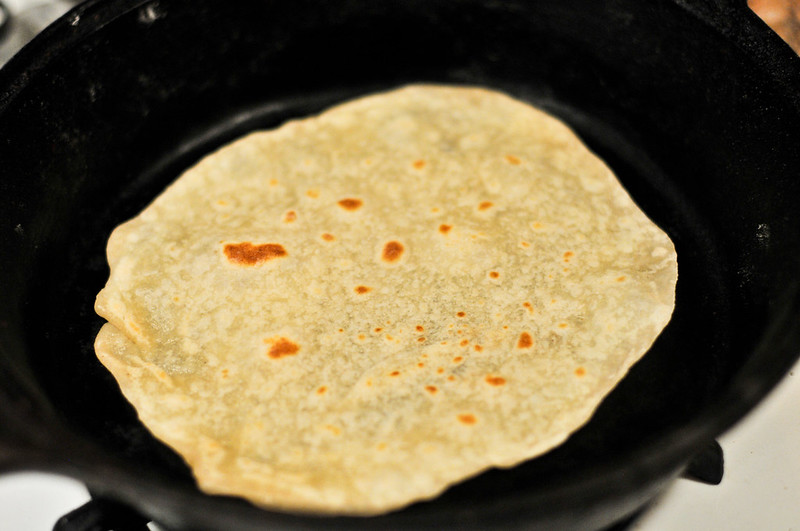 The steak only got better when sliced and stuffed into homemade tortillas. I've been working on perfecting my flour tortillas—for Tex-Mex, flour trumps corn any day—but my lard-free versions have only gone so far with my Houston bred wife who knows the truth in those semi-transparent discs of deliciousness. So this time around I upped my game and went all out with lard-laden tortillas, and they were magical. 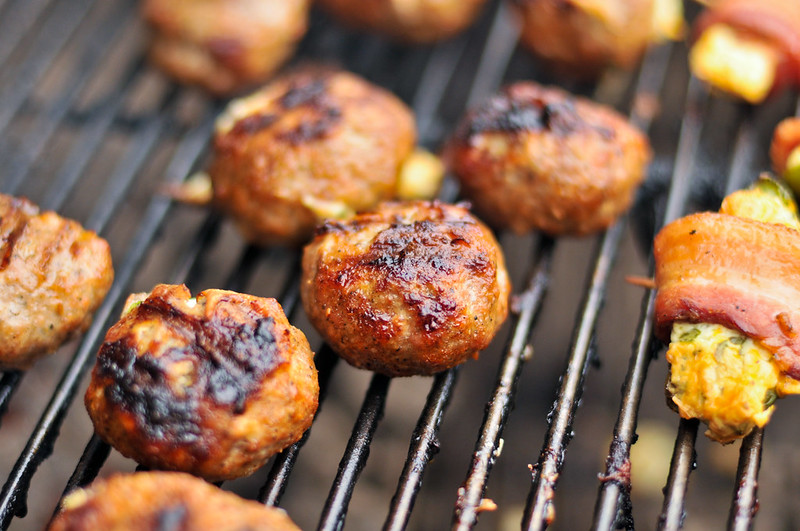 Stuffed jalapenos are almost always a must for any Tex-Mex menu, but I decided to shake things up this time by mainly forgoing the bacon and wrapping them in sausage instead. These armdillo eggs—as they're commonly known—were off the hook. I underestimated how good they would be—I could have gone with all sausage wrapped and skipped the few bacon ones I did for good measure. 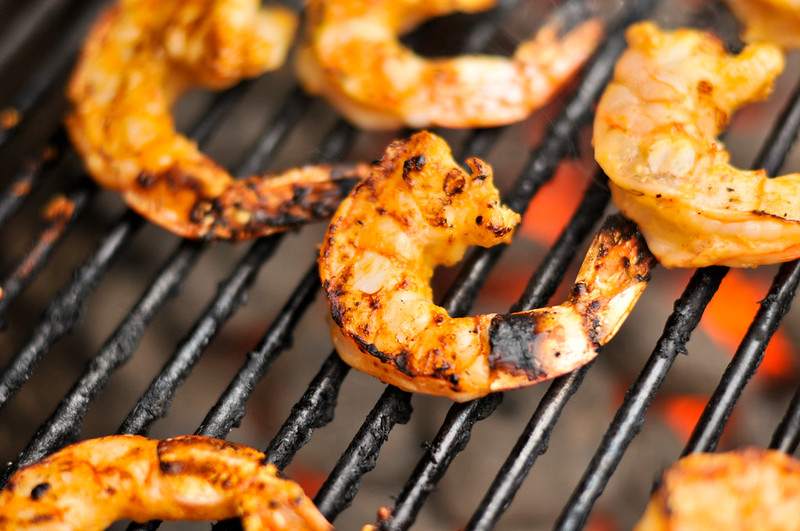 I'm very slowly warming up to shrimp, which I previously detested, and these garlic-lime jumbos went a long way in pushing me further into the deep end. I originally wanted them to be spicy garlic-lime shrimp, but the one jalapeno in the marinade wasn't enough to deliver on the spicy, but the garlic and lime were right on. 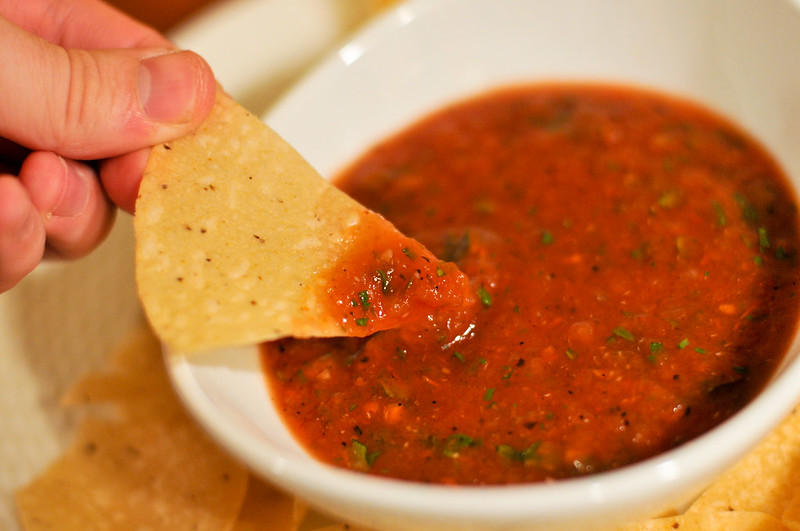 What's a fiesta without salsa? A last minute addition, I made some roasted tomato salsa for a special post in Serious Eats that later became the centerpiece of the party while people were waiting for their meat. I also did my favorite tomatillo salsa as a second, more tart, option. 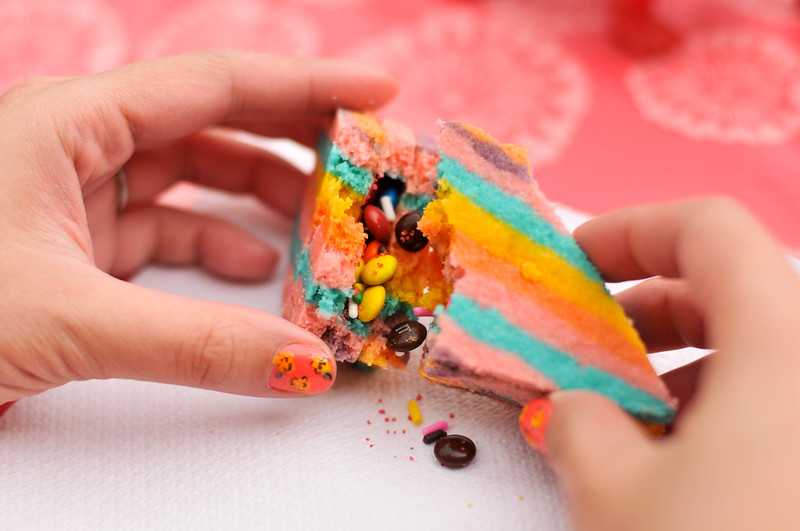 Kris was on dessert patrol, and she bagged a big one when she spent days working on these pinata cookies. The process may have been long and a little frustrating at times, but the outcome was impressive. Break one open and the sugar madness continues with M&Ms and sprinkles! 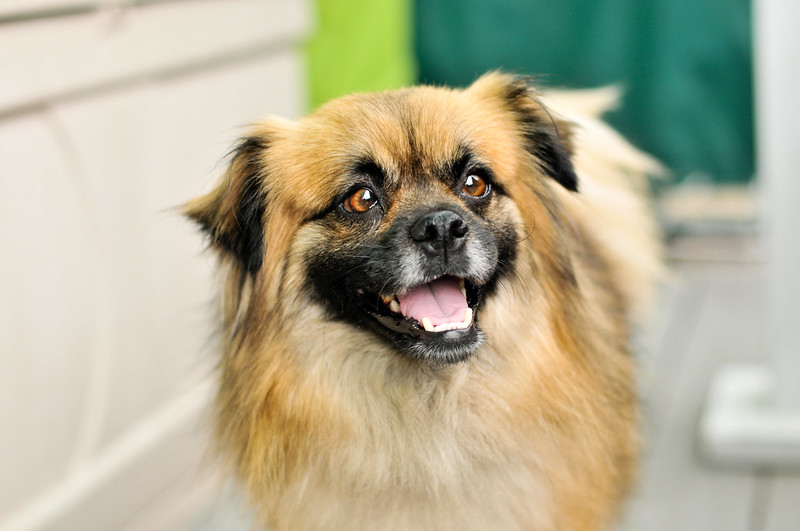 New year, new faces at the Meatwave. This one is probably the cutest you'll ever see around these parts—say hi to Reggie. He's a new acquisition of Marissa and Joe and I'm gunning for him to get the best attendance record this year. 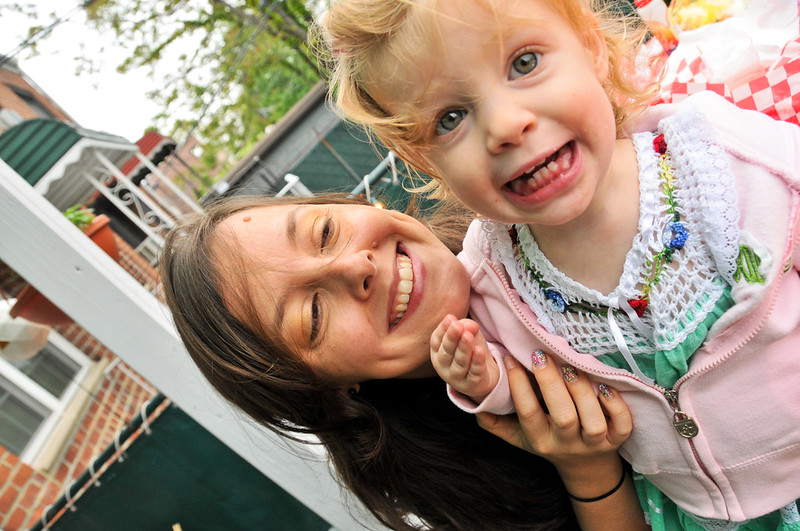 Mia never wants to miss a Meatwave after her first taste last year. While first indulging in some meat, she promptly spent the rest of the afternoon working through an entire pinata cookie on her own. Then came the sugar rush, and finally the crash, at which point she summoned her servants Blair and Daphne to whisk her back to Jersey City. 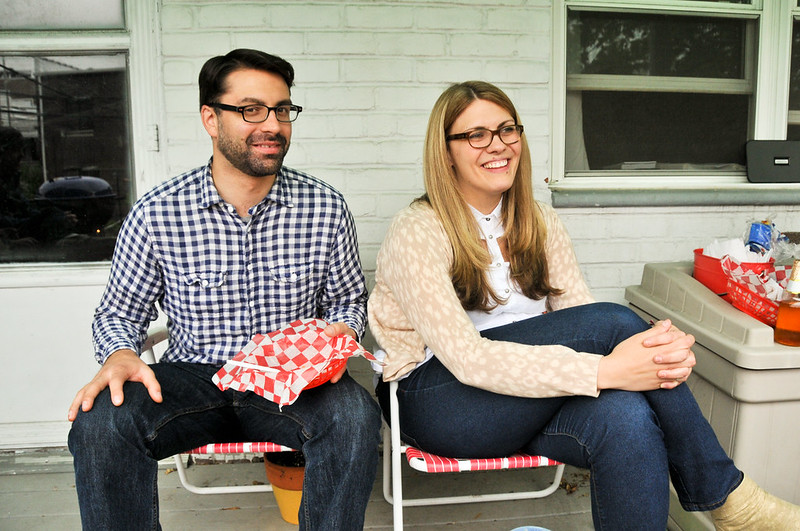 Mia brought Daphne and Blair, and Daphne and Blair brought Tom and Meredith. Not just newcomers to the Meatwave, but also fairly recent transplants into Astoria, we welcomed them with open arms and spent the day dishing about local eating establishments, as required by all Astorian nerds. 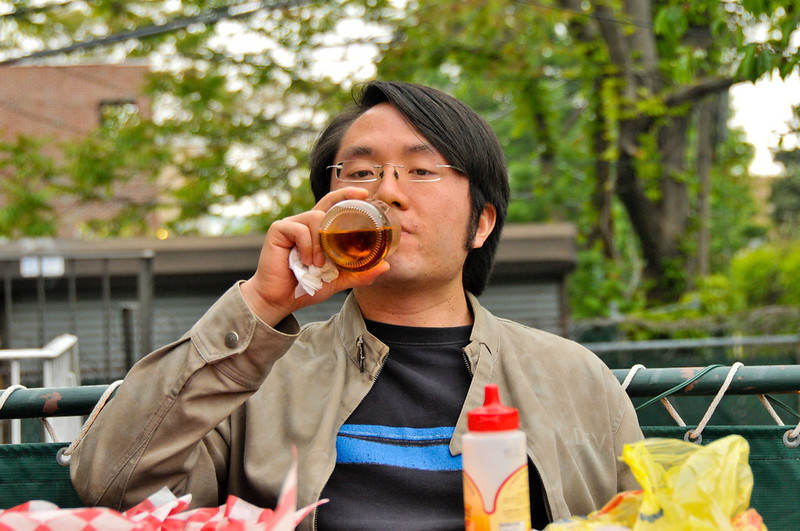 Chris is not one to miss a Meatwave, and likewise he made it out to the first of the season to celebrate the awakening of meat after a long winter. I give him special eating credit this time since he worked his way through every item, so much so he was totally overtaken by the meat in the later hours. 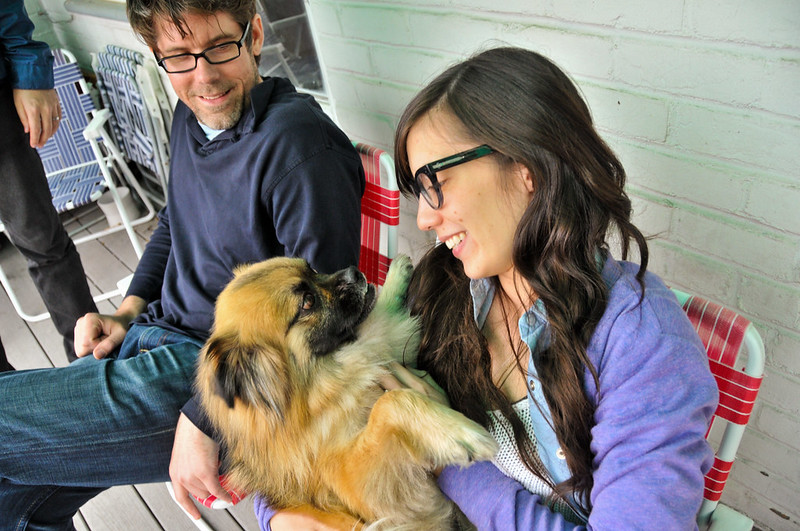 I think as long as Reggie's here, he's going to be a central focus of these Meatwave-related posts. Here he's getting belly rubs from Marissa, while Matt eagerly awaits his turn for affection. 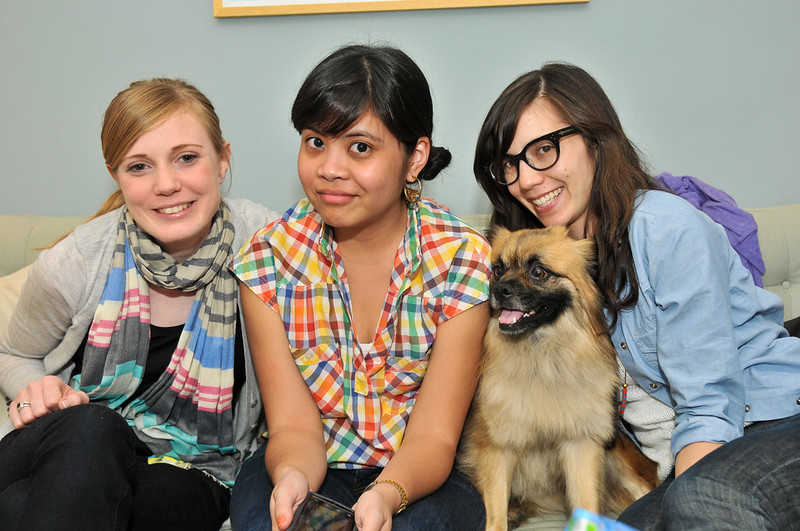 And we finished the night with Reggie hanging on the couch with all his ladies—Erin, Kris, and Marissa. Reggie knows a good time when he sees one. Hey, get your ming out of the gutter, I'm talking about the Meatwave (or maybe that's further in the gutter), and Meato de Mayo was the perfect start to what will certainly be an amazing season.