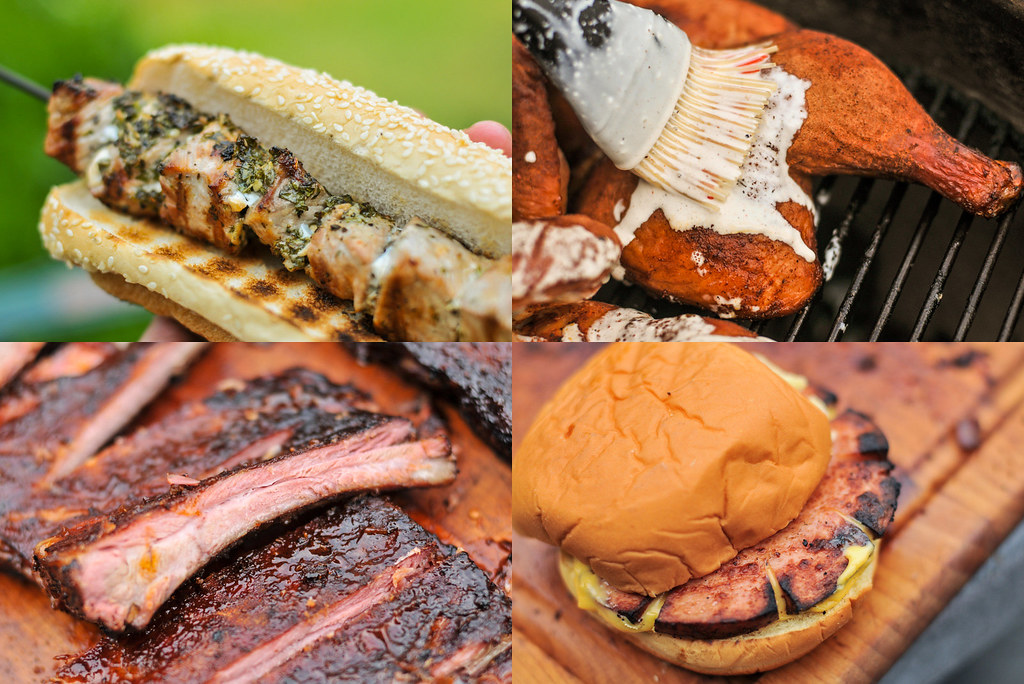 From time to time, the half-baked idea of leaving NYC comes up. While we're always hard pressed to think of anywhere else we really want to live, my wife does a soft sell of her Texas home, to which I counter with the notion that four straight summer months of intense heat would kill my motivation to cook and eaters' desires to sit outside and consume endless quantities of meat. It looks like that argument may now be bunk, as this weekend's Meatpocalypse brought with it both scorching hot temperatures paired with the largest showing at the Meatwave ever, with everyone eager to partake in a collectively impressive vast meat intake. 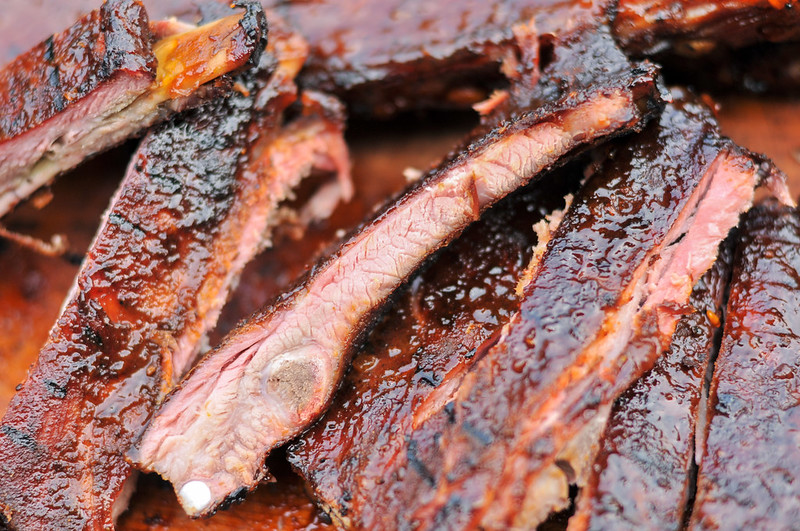 The Meatwave has be in true form this year with each subsequent barbecue being larger than the last, bucking the trend of "on" and "off" weeks. My original prediction was for a modest showing and for that reason, I chose to pick up a few racks of spare ribs and try out a couple different techinques to hone my 6th place racks into champions. As the week went on and the RSVPs rolled in, those three racks were upped to four, then finally five on a last minute meat run the night before. Testing both a mustard slather and revised cooking method—the ribs are foiled for about an hour in the middle of cooking—I think I've come to a solid result that's ready to be tested against 50 teams next month at Ribfest. 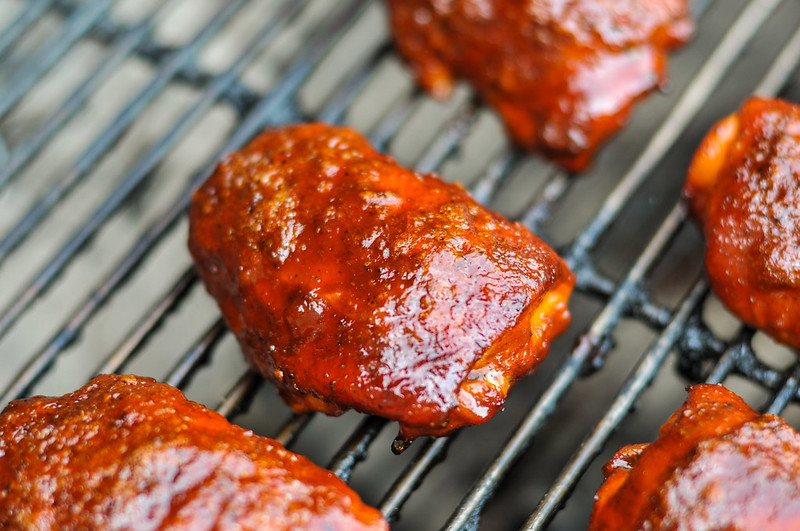 I also went for a test of my competition chicken thighs. For these, I threw out almost all tips I picked up from others and went with my heart on how I think properly cooked chicken should be done. I won't divulge those "secrets" just yet, but I can say I achieved a slightly crisp and bite through skin that was loaded with the intensity of flavor you want when a judge will most likely take just one bite. 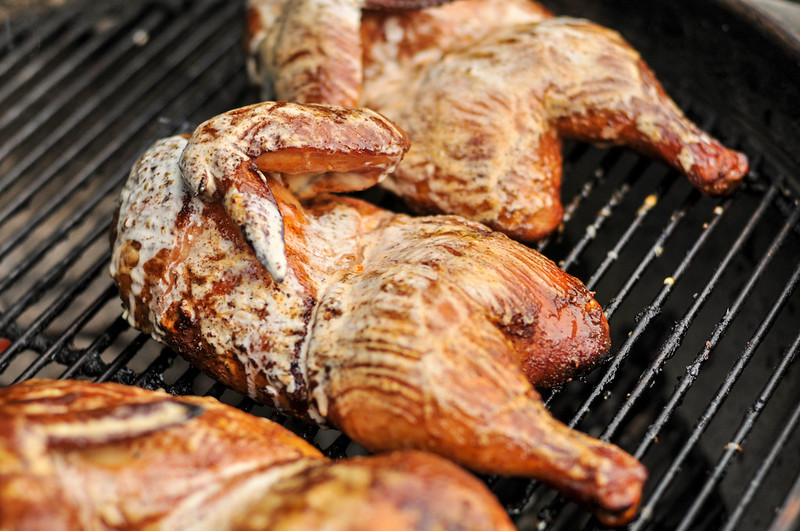 Competition thighs are incredibly painstaking and time consuming to prepare, so to feed the masses, I chose a different style of chicken—smoked half birds finished with an Alabama white sauce. Much better for a standard backyard cookout than competition-style, these birds were incredibly moist and delicious. This was thanks to starting them in an apple juice-based brine, followed by a nice rub down, cooked over indirect medium heat, and then finished with the mayo/vinegar white sauce that infused the meat throughout with an excellent tang. 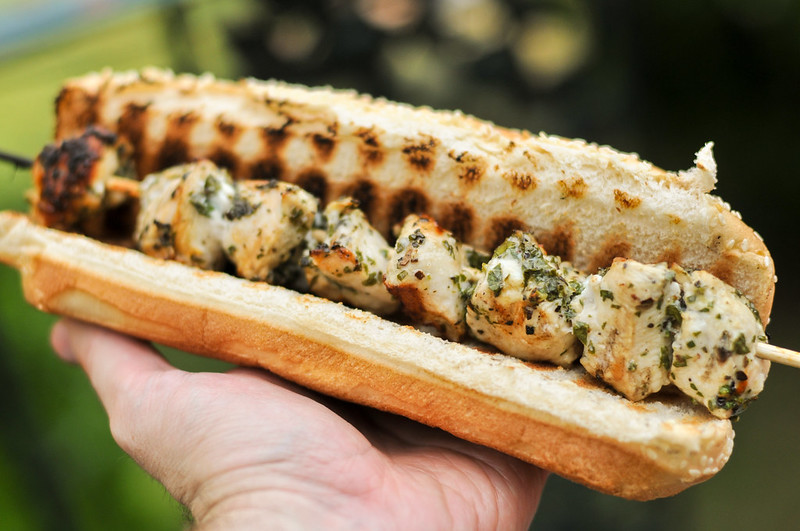 Spiedies were another offering I thre into the mix for the Meatpocalypse. A regional treat of Binghamton, NY, it's all about the marinade here. The oil, vinegar, and herb mixture can be tossed onto cubed chicken, pork, lamb, or beef and will work wonders on all equally well as they soak up the flavor for two to three days in the fridge. Skewered and placed over a hot fire, they then cook up moist and delicious, and are served on a hoagie roll. Meatwave Mike has been singing the praises of spiedies for ages, but unfortunately he wasn't there to partake this week, but a couple other Meatwavers were able to vouch for their authenticity. 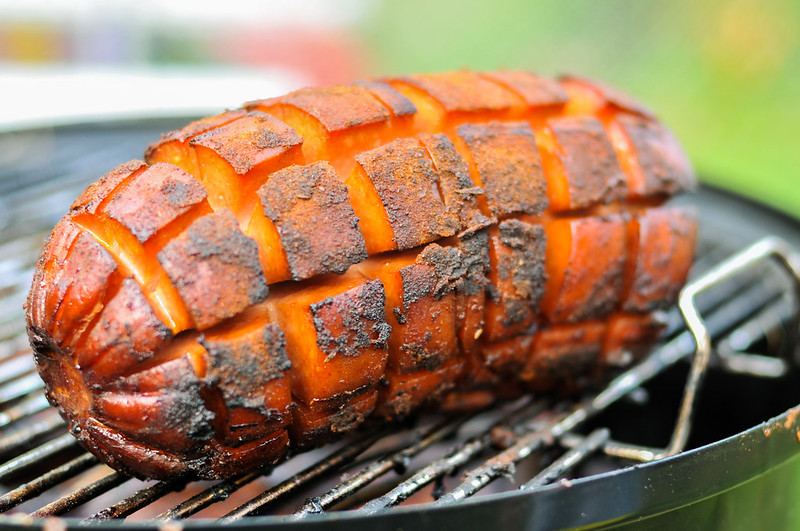 In the run for extra racks of ribs, I also picked up a three pound hunk of bologna. I've seen others score these and just throw them on the smoker, so I figured it'd be an easy addition to ensure I had enough meat for the ensuing crowd. I kind of just wrote this off as an afterthought, but in the end, the bologna ended up being one of my favorite meats of the day. The smoker gave the scored portions of the sausage a nice smoky crust, then sliced, grilled, and finished with cheese on a roll, it was a triumph of textures and flavor. Never thought I've ever wax so poetic about bologna, but it's seriously worth a try. 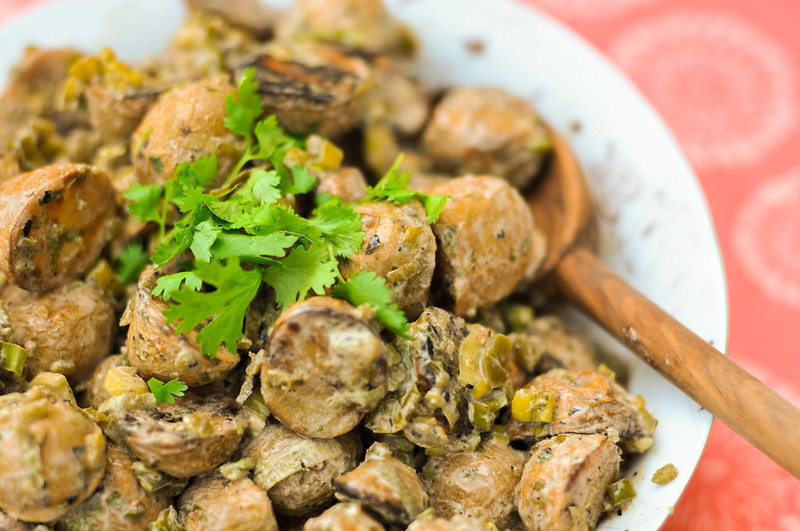 With so much meat, I didn't do much in the way of sides. The only thing I made was this jalapeno potato salad. Grilled jalapenos and new potatoes were tossed in a vinegar and sour cream dressing, along with cilantro and green onions. All the flavors were spot on, but I went a little jalapeno crazy and made it hot beyond the point of enjoyment. If I had cut back the jalapenos by a third, this would have be off the the hook. 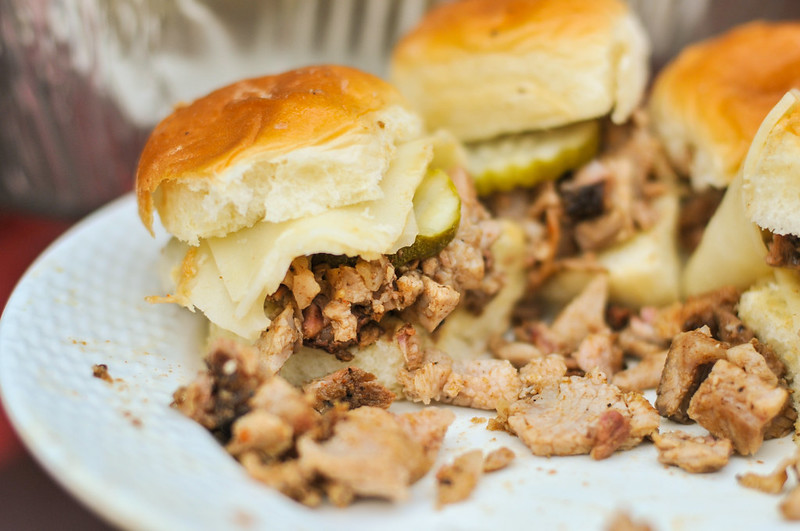 A lot of my decisions in life are made out of constant state of anxiety (for which slow smoking meats is an incredible crue). Even with all the food above, this led me to put out a call for even more help with meats and sides at this Meatwave in a fear of running out of food. No one answers a call like that better than Tyson, who upped his seven racks of ribs last time with four picnic shoulders this time around. Done in a Puetro Rican pernil style, they arrived to the Meatwave whole and were then chopped and piled onto Hawaiian rolls with a pickle slice and swiss cheese, making a loose variation on a mini-cubano. I couldn't wait for those sandwiches to be done and had my share of the juicy while Tyson chopped, but everyone else with more patience finally made their way through an entire tray of these by the night's end. 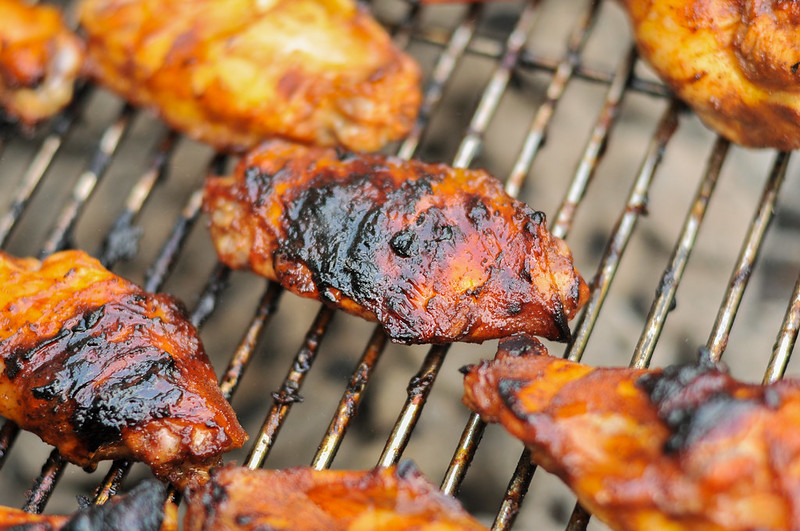 New time Meatwavers Julian and Chris, whom I met at NYC BBQ Cookoff, also heeded the call to chip in with some tasty barbecue wings. Brined and sauced, these were some excellent wings, proof in the fact that I was still able to down a few after I was already incredibly stuffed. 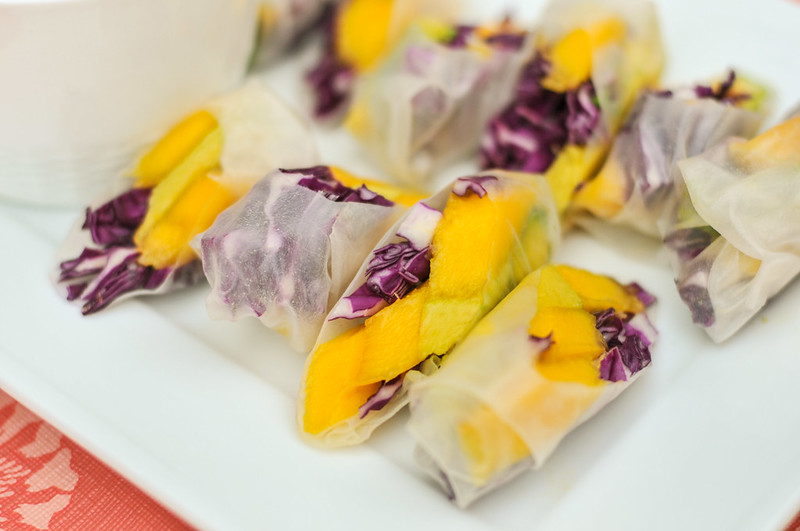 Kristin chipped in with the most appropriate side for a near 100 degree day—fresh spring rolls. Red cabbage, mango, and avocado were wrapped in rice paper and served with an accompanying cilantro and sweet chili sauce. 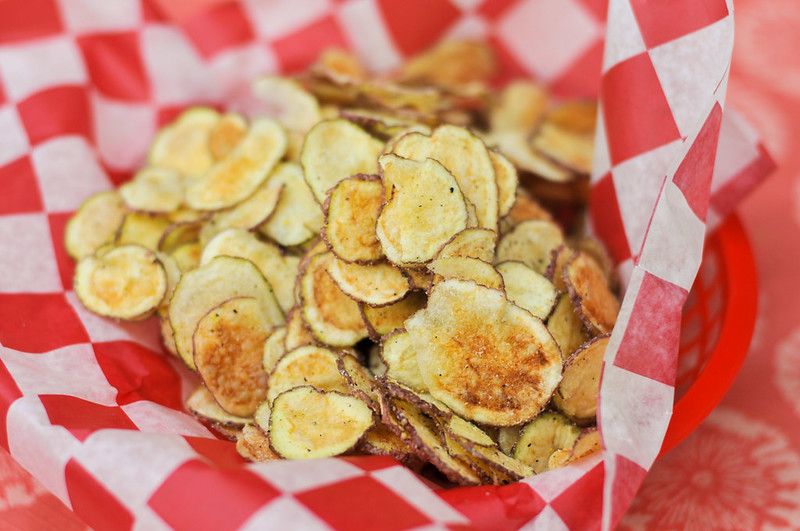 Anna impressed us all with these hand cut (seriously tiny potatoes, thinly hand-cut...mad props) potato chips made in the microwave. Never hearing of this before, I was amazed with how you can just spray the taters with oil and microwave them into crispy little chips. 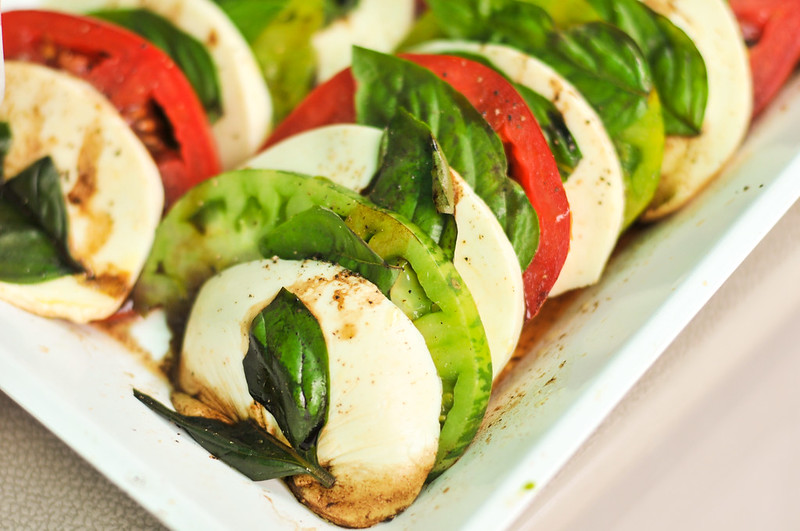 Rachel and Chuck brought this beautiful caprese salad, with both red and green tomatoes. Arriving after the ribs made their rounds, it took a while for people to make their way to the salad, but by the end of the night, the wife had to protect the last remaining pieces for us to enjoy another day. 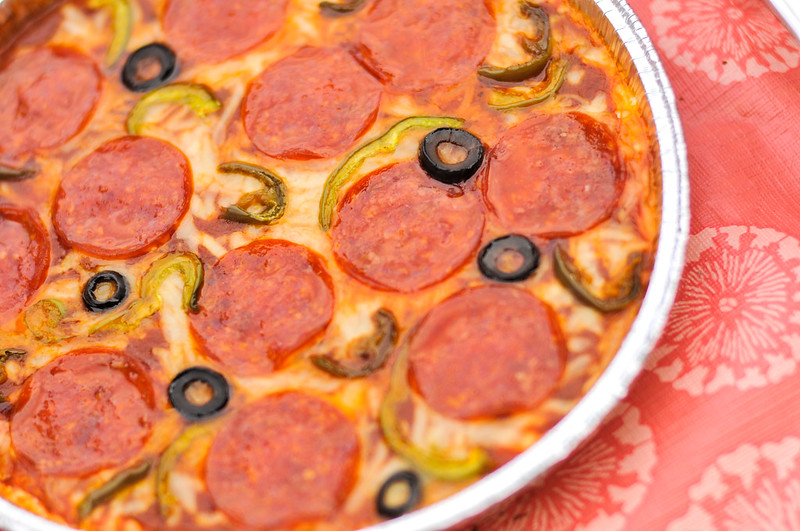 The most talked about dip of the day was Treyci's pizza dip. The assumption was ricotta lined the pan below the pepperoni and peppers, but it was actually sour cream and cream cheese—a winning base for any dip. 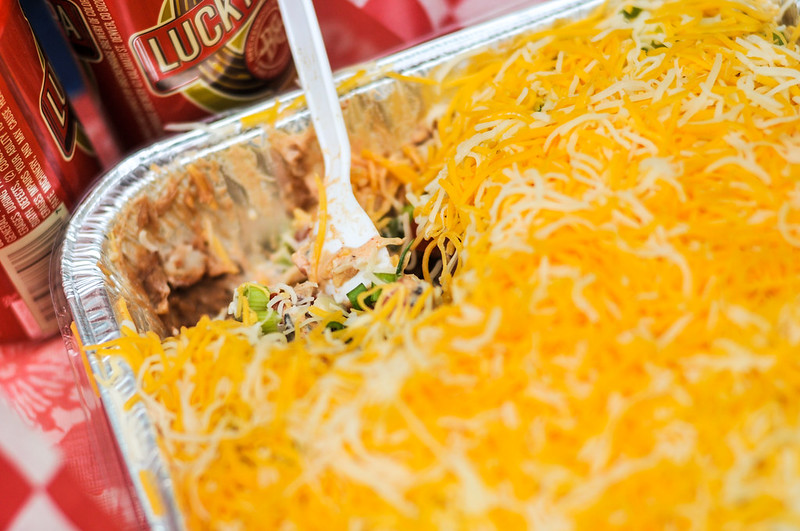 Julian didn't come with wings alone, but his wife Tracy also pitched in with both a bean dip and coleslaw. 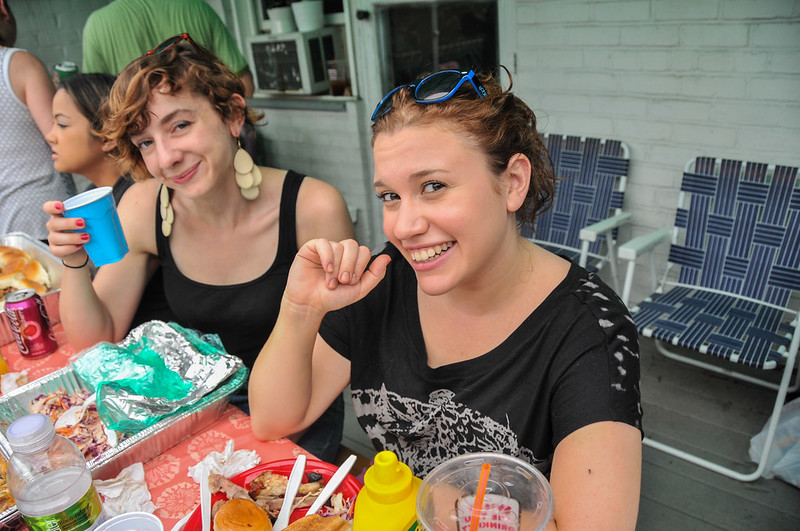 This was, without question, the largest Meatwave we've every had. I'd bore you to death if I went through all of the about 25 people who rolled through during the day, but I can't go without recognizing at least some of the folks who made the Meatwave so special.

Here we have my sister next to Anna, who's making her first, and hopefully not last, appearance of the season. 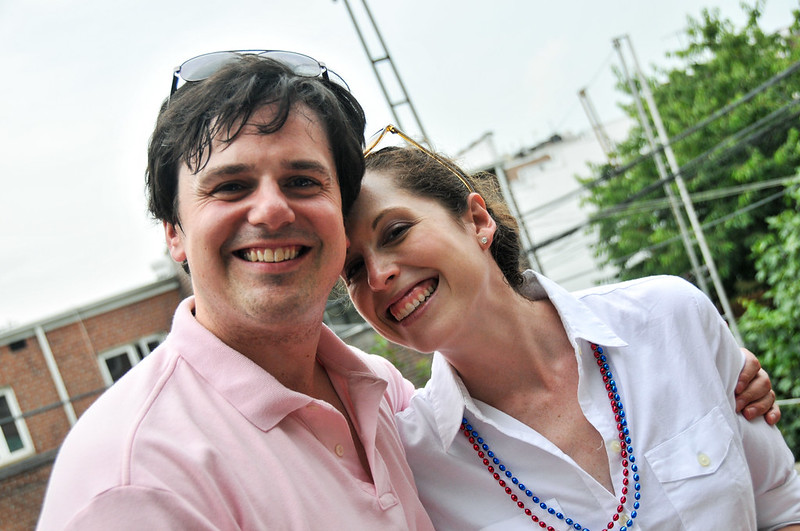 Then we have Lauren and Kevin, who lamented missing the Italian-themed Meatwave two weeks ago, but I'm sure were not disappointed with the spread at the Meatpocalypse. 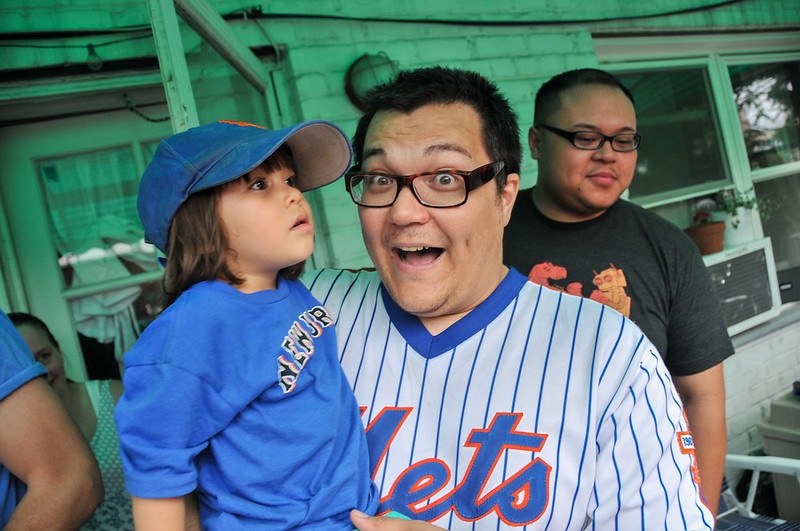 Fresh off a Mets game, Francis and Artie stopped by to wash down those hot dogs with plenty of ribs and chicken. 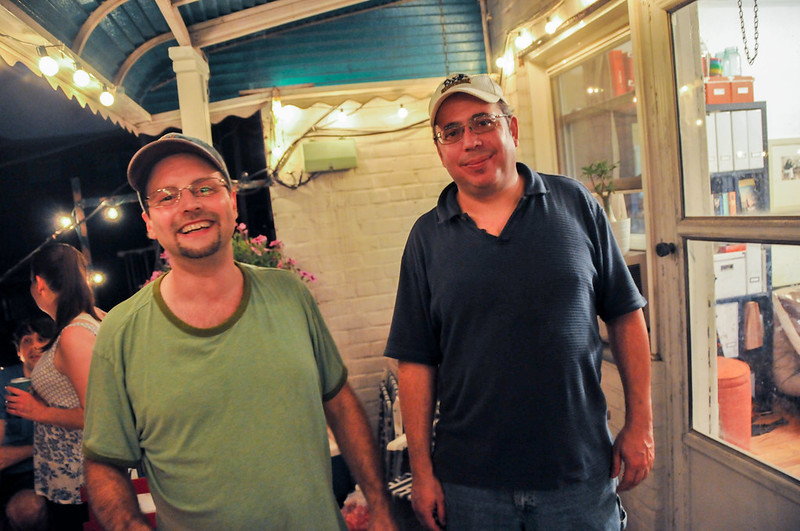 This is Julian and Chris of Island Smoke Ring. Also being newbies at the NYC BBQ Cookoff, we hit it off and I'm glad we got to hang out again in a warmer, drier, and less stressful setting. 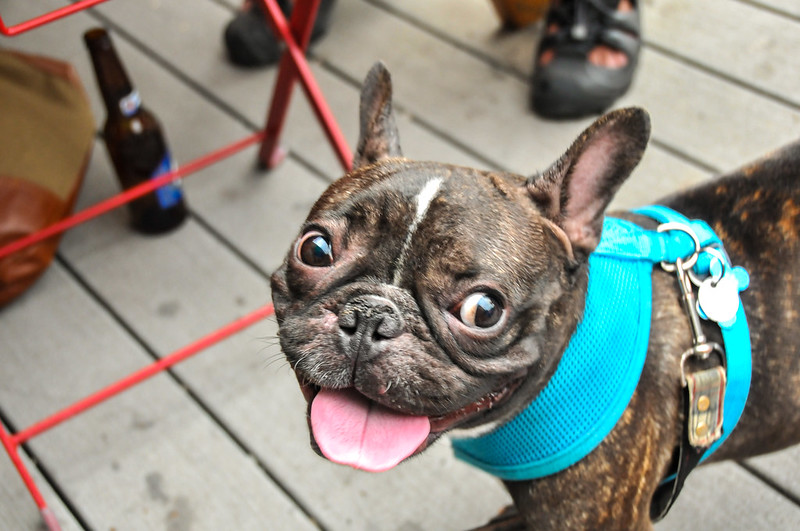 And then there's my favorite Meatwaver of all time (ok, I'm biased), Pork Chop! Celebrating his third birthday in style, he busted in an promptly took ownership off all pieces of fallen meat. 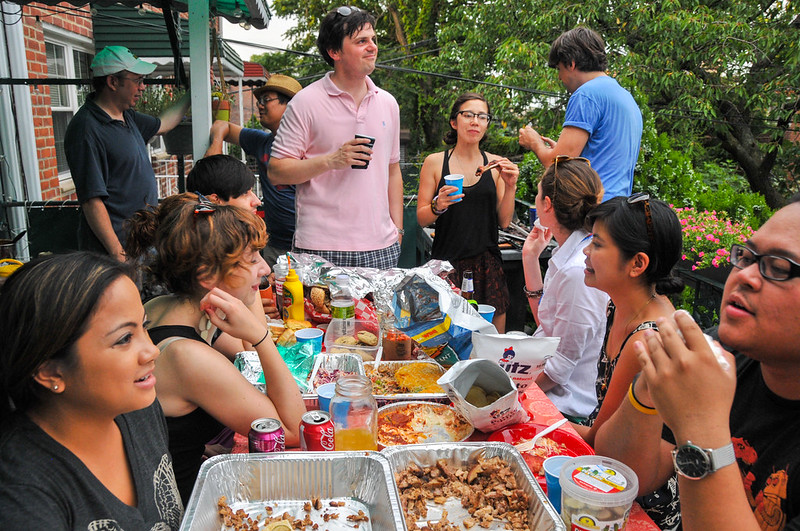 When I said this was a big Meatwave, I meant it. This is not even half the people who were there—we managed to squeeze 25 people on my deck (albeit, 3 of those were tiny tots). Despite my worries, not one person left unstuffed. In fact, we over did it so much that almost everyone go their own fair share of take aways, which is what I like to see. Friends, food, and good times, this is what the Meatwave is all about, and that's just what the Meatpocalypse delivered.