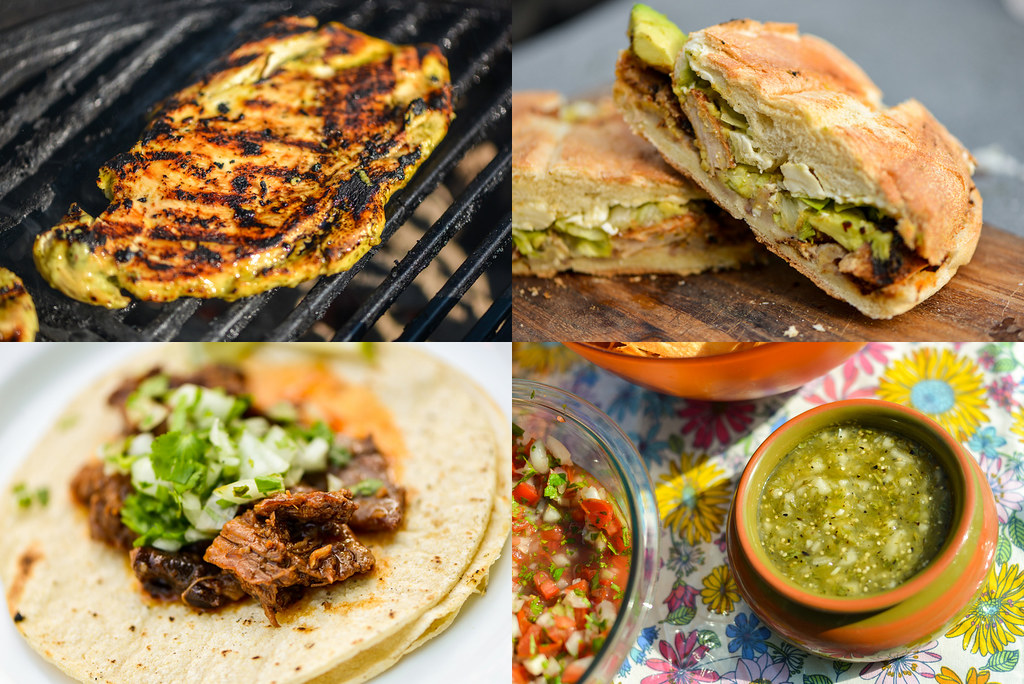 August marked the last time we had an official Meatwave, and while there was a pretty kick-ass pizza party and barbecue competition since then, I've been itching to get back at my true love. With fall settling in and time running short for more meat feasts this year, I wanted to make this one count. I started by theming it around a couple of my favorite cuisines—Mexican and Tex-Mex—and filling it with incredible dishes. Then I sent out a call for eaters that was widely answered, added in a couple bottles of smoky mezcal, and all of that added up to one of the best Meatwaves of the season. 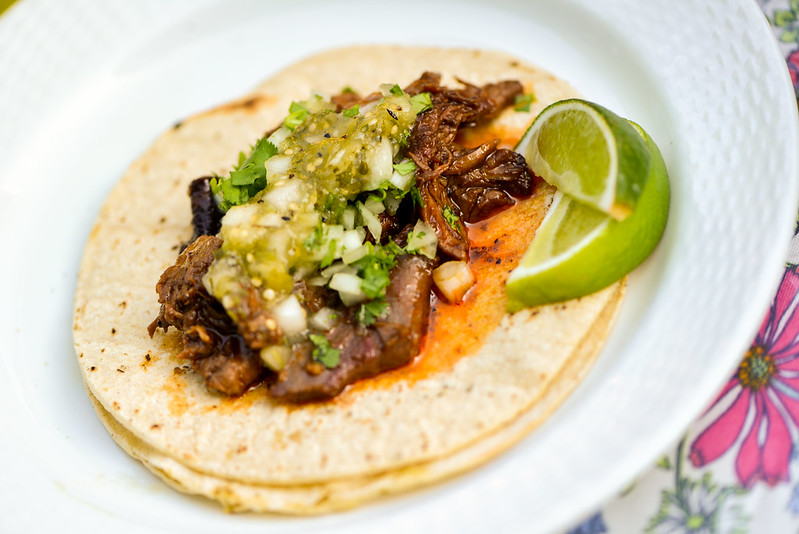 I've had this beef barbacoa recipe on my perpetual to-cook list ever since it was posted up in April. It seemed like a perfect fit for the day, but in my need to always make new recipes, I switched things up a bit. The complexly layered sauce more or less stayed the same, but I swapped out the beef chuck roast for a lamb shoulder roast that was first smoked for three hours. The results were incredible—this smoky, spicy, and earthy lamb barbacoa was the standout of the day, especially when piled into warm corn tortillas and topped with onion, cilantro, and tart tomatillo salsa. 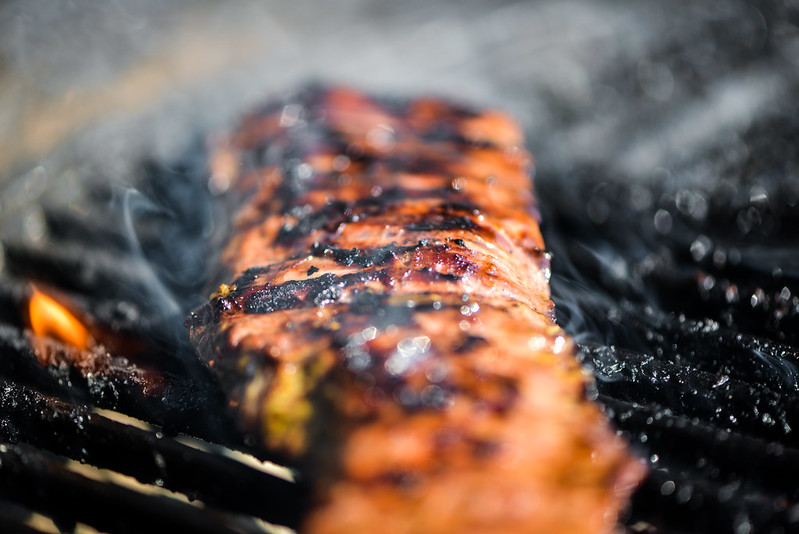 I think it's impossible for me to throw a Tex-Mex party without skirt steak fajitas—it's seriously one of my favorite things ever. I grilled up four pounds of inside skirt, sliced it thin, then we all piled that juicy and meaty steak into homemade flour tortillas with sauteed peppers and onions, sour cream, and salsa fresca. 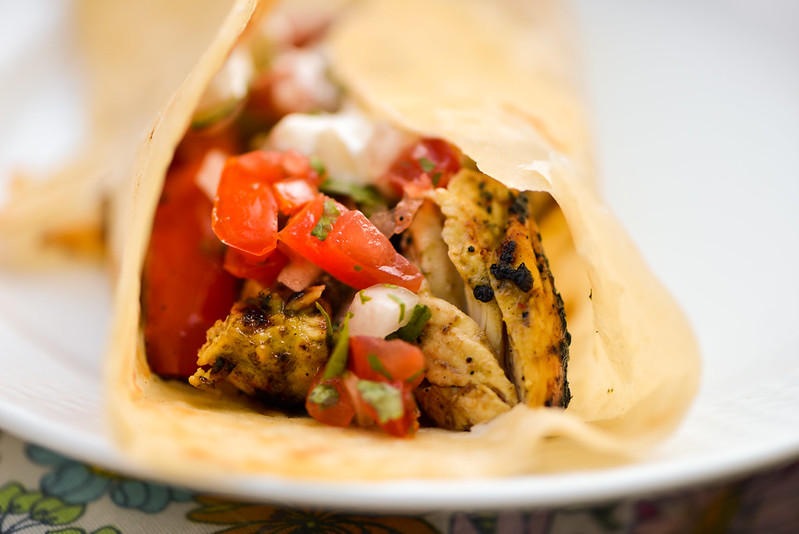 While I had fajitas on the mind, I did a refresh on my chicken fajita recipe to increased success. The steak has to be pretty bad for me to pick chicken over beef fajitas, but if all chicken was as good as this was, I might just change my tune. The new and improved recipe will be up next week, so keep an eye out for that. 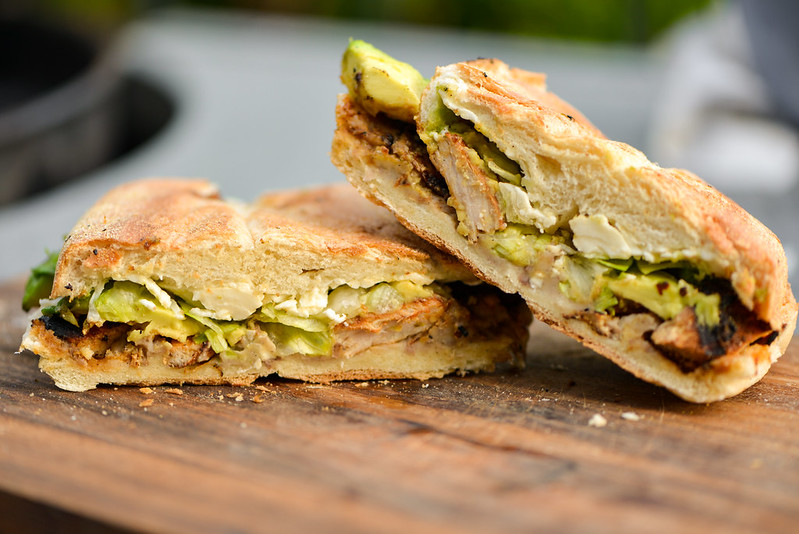 In the middle of the summer, Meatwaver James put out a call to help him eat through almost every torta at the incredible Tortas Neza truck in Corona, Queens. I have never been much of a tortas fan until I had those overstuffed sandwiches—each one just seemed better than the last. That inspired me to make these carne enchilada tortas with spicy grilled pork, refried beans, avocado, lettuce, and Oaxacan cheese stuffed into a roll and then heated and pressed on the grill. 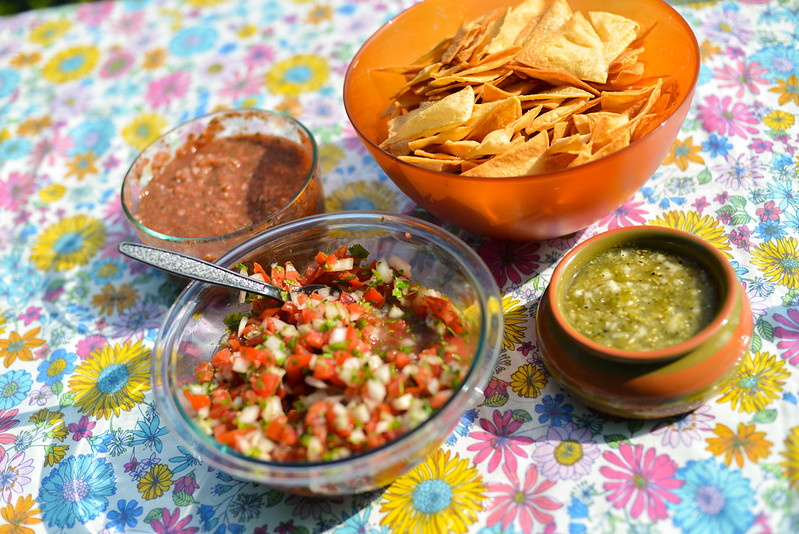 You can't have a fiesta without salsa and chips, so I whipped three different offerings. Salsa fresca, roasted tomato salsa, and tomatillo salsa were all served alongside a big ass bowl of home fried tortilla chips. 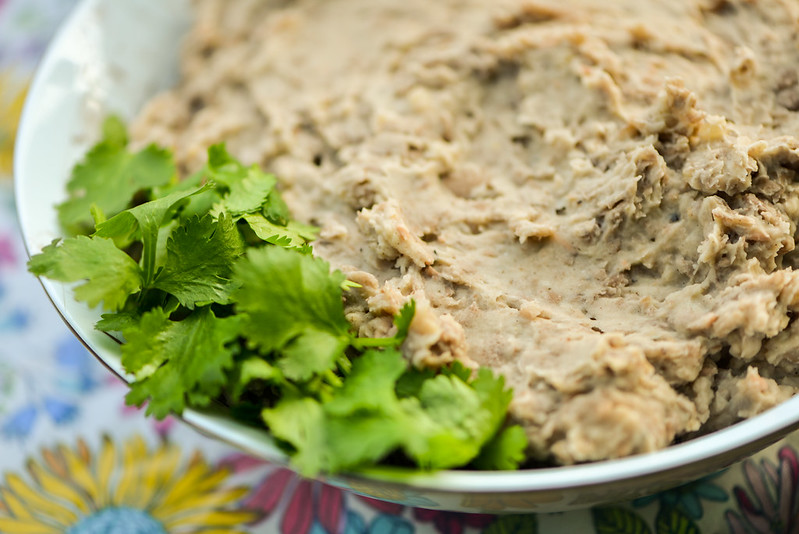 For additional sides, I tried my hand at refried beans done right—cooked with salt pork and fried in bacon fat. They were pretty tasty, but could still use a little work to match some of the better refried beans I've had. I also made a whole pot of Mexican rice, which was gone before I even had a chance to take a photo of it. 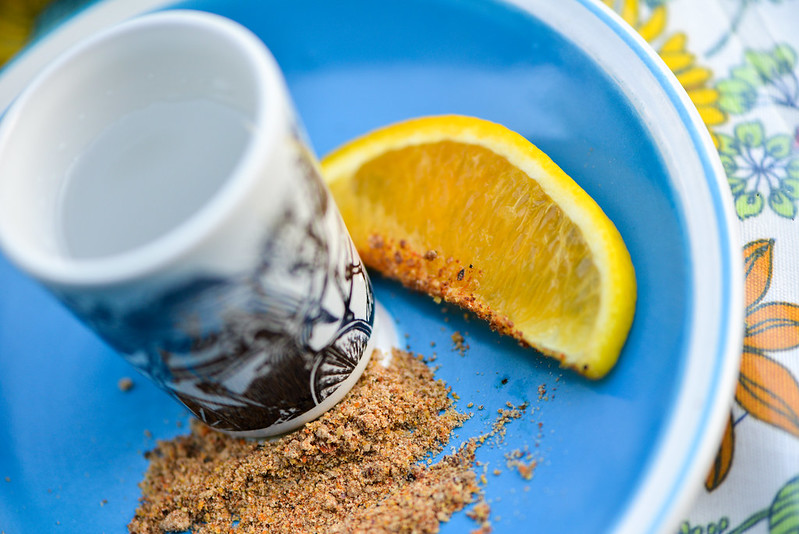 Alongside all the food were a couple bottles of mezcal. A trip to Mexico City last fall left me with a insatiable taste for this smoky cousin of tequila, and I use any excuse to pick up a new bottle I have yet to try. Mezcal is best sipped, interspersed with orange slices dipped in sal de gusano (worm salt!).

We had a great crowd out at the Meatwave that started with Treyci, Tito, and my favorite Frenchie—Porkchop! Treyci made her version of Mexican corn to fit the theme and Porkchop scavenged for scraps the entire afternoon. It was just these guys and myself up on the deck because... 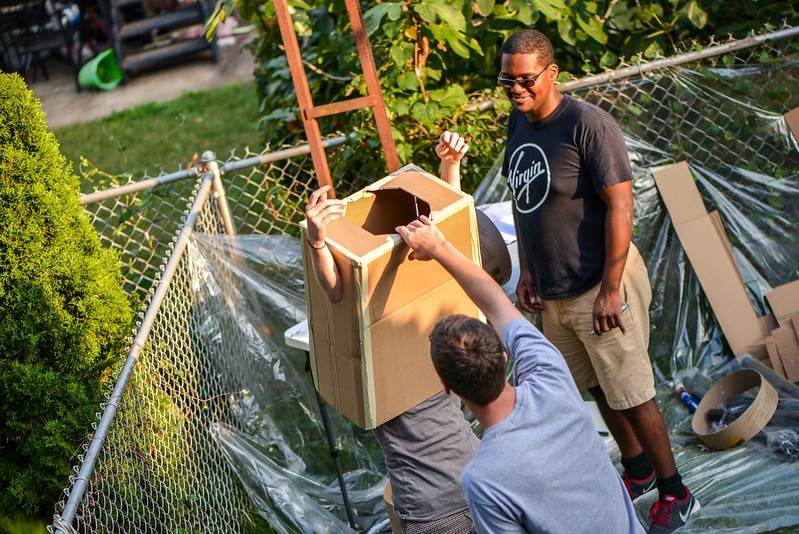 ...this was going on downstairs. Almost the entirety of Kris's new co-workers descended on the Meatwave, using our great outdoor space to assemble their Halloween costumes (this is apparently a very serious thing at Penguin). As the crowd of people in the backyard worked tirelessly on getting their costumes done, the inevitable meat-breaks were well deserved and received by all. 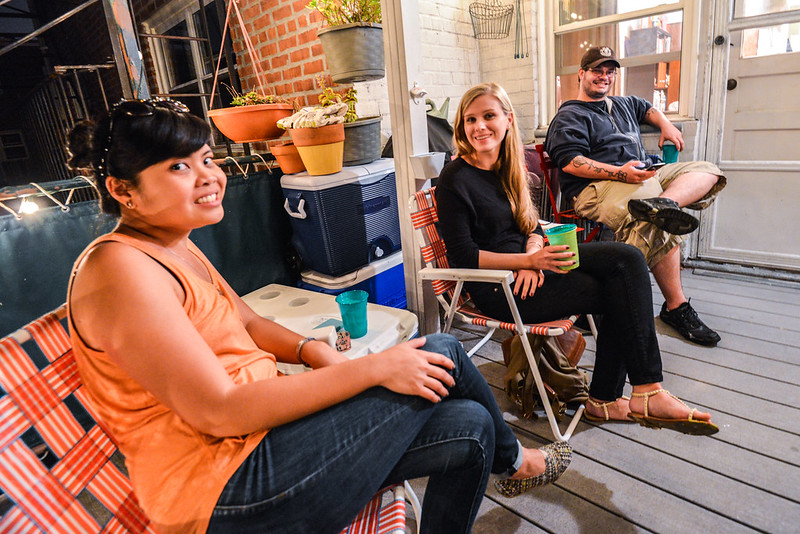 Here is Kris with her co-workers Dana and Joe after they had finished up their costume duties and were able to relax and throw back some beers and mezcal. 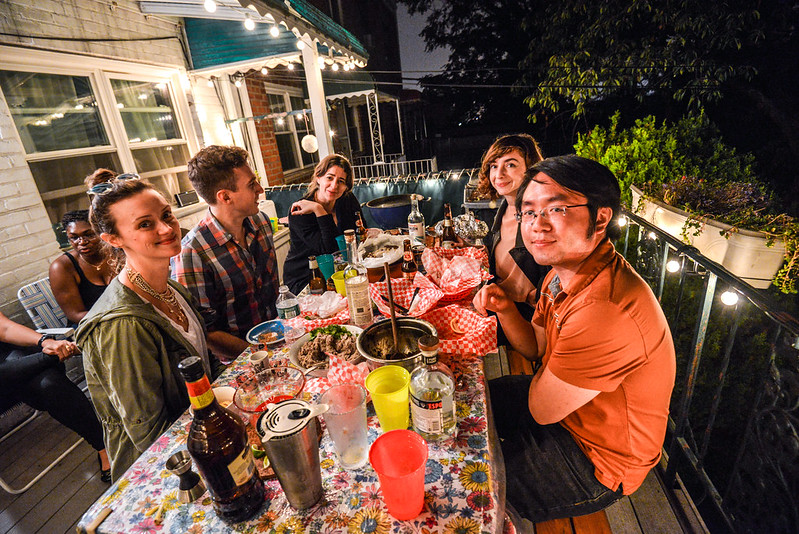 And then we have the table crowd—Sarah, Jon, Suzun, Anna, and Chris. This represents just a small portion of the Meatwavers who came out to partake in the feast. I was bad on my camera duties because my love for mezcal and tequila found me a little lot more inebriated than usual. There's little memory of the end of the night and these photos taken after the sun set, but from what I'm told, I didn't make too much of an ass of myself and everyone thought this was one of the best Meatwaves of the season. Based on the food and good times I can (and can't) remember, I wholeheartedly agree, which makes me sad that the Meatwave is formally coming to a close in a just a few days.