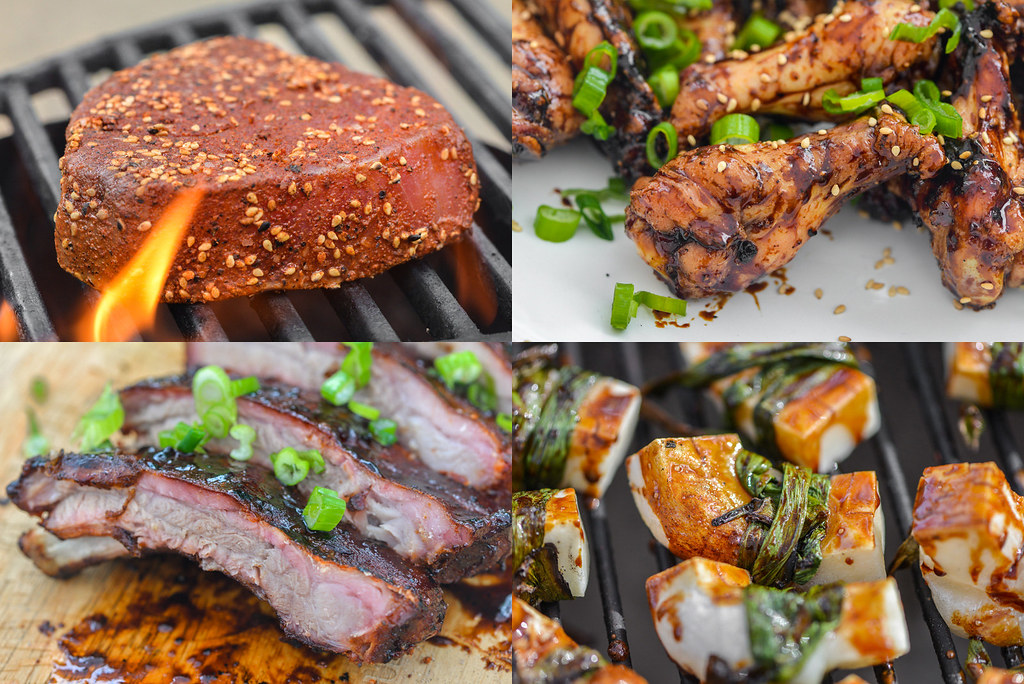 I have a couple friends and family who are really into tiki bars, like super into them. Hanging around them the past few years has heightened my interest and appreciation in all things tiki, and that led me to hosting my second tiki Meatwave a couple weekends ago. I jot down recipe ideas as they come to me, and having been more immersed in tiki venues as of late, my list of tiki-inspired recipes had grown pretty long. So it was actually a bit hard to pick and choose what to make for this cookout and I ended up doing a whopping eight recipes, but still left a bunch for another day. 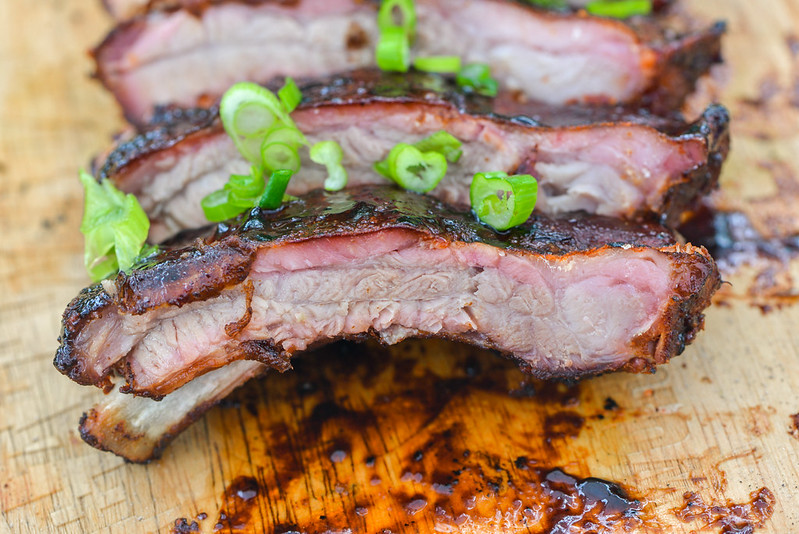 The first thing ready for eating at this great tiki line-up where these honey-tamarind ribs. Doing so many sauce reviews, I've noticed tamarind is a fairly common ingredient, adding a nice sour undertone that tastes really great when contrasted by sugars. My glaze was a fairly simple mixture comprised of primarily tamarind, honey, soy sauce, brown sugar, and vinegar that wasn't as complex and layered as a barbecue sauce, but tasted very fitting on smoked ribs and started the day off on appropriately sweet footings. 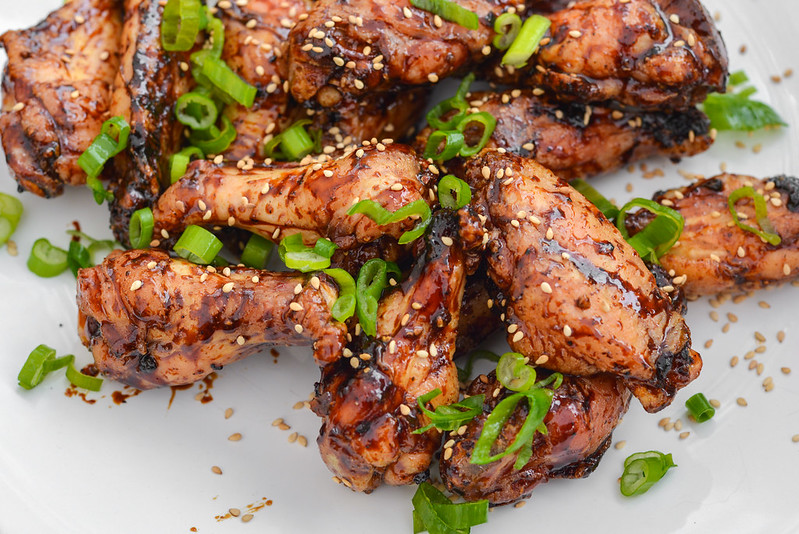 Next up were these yakitori wings. I made my own tare sauce for these, which kept the sweet and savory flavors flowing. I had coated the wings in baking powder and air dried them before grilling, so they cooked up nice and crisp to add a pleasing crunch that made them extra awesome. 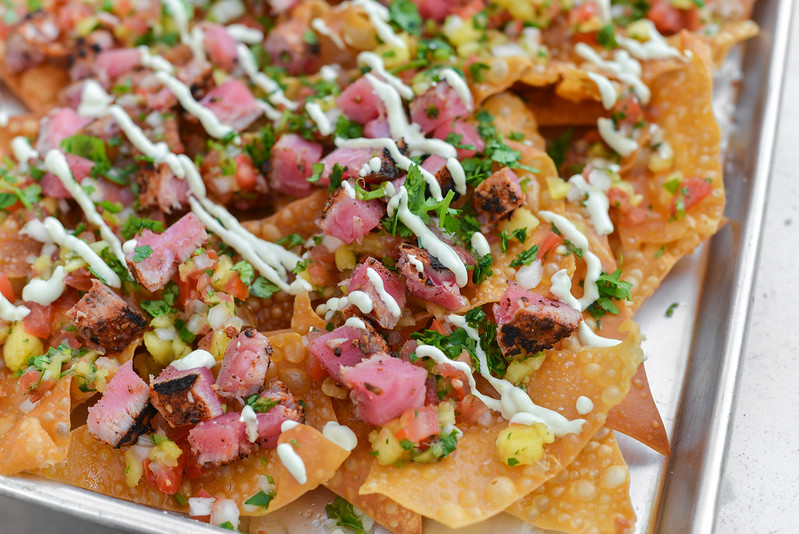 These wonton nachos were a late in the game substitution for a more complicated recipe I was working on for smoked crab rangoon that I decide to save for another day. Dropping that recipe might have been a blessing in disguise though because these nachos were a guest favorite of the day. On top of a bed of fried wontons I added a pineapple pico de gallo, grilled tuna, and wasabi cream. It wasn't all that hard to put together, but it had immense flavor and felt very tiki-worthy. 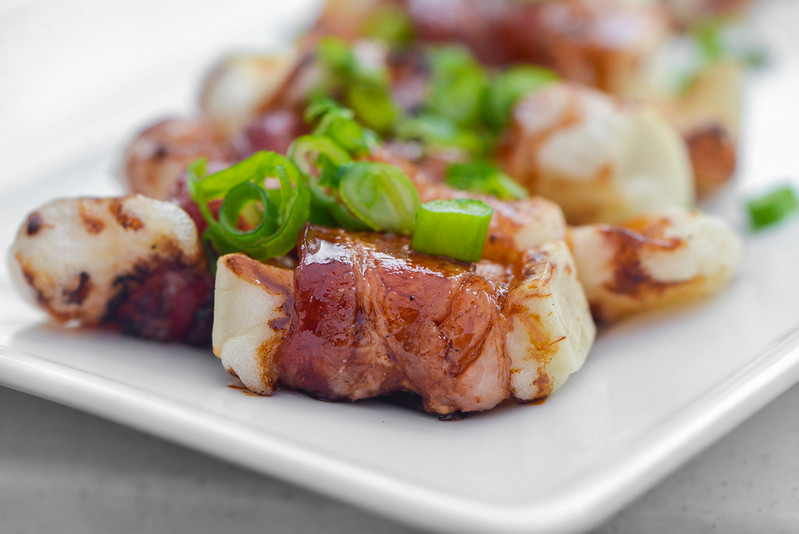 For me personally, the easiest dish of the day was my favorite. This bacon-wrapped mochi was just store-bought kirimochi, wrapped in bacon, grilled, and then brushed with tare. The mochi gets super soft and chewy on the grill, and it's an excellent and unique texture that goes great with the smoky bacon and sweet sauce. 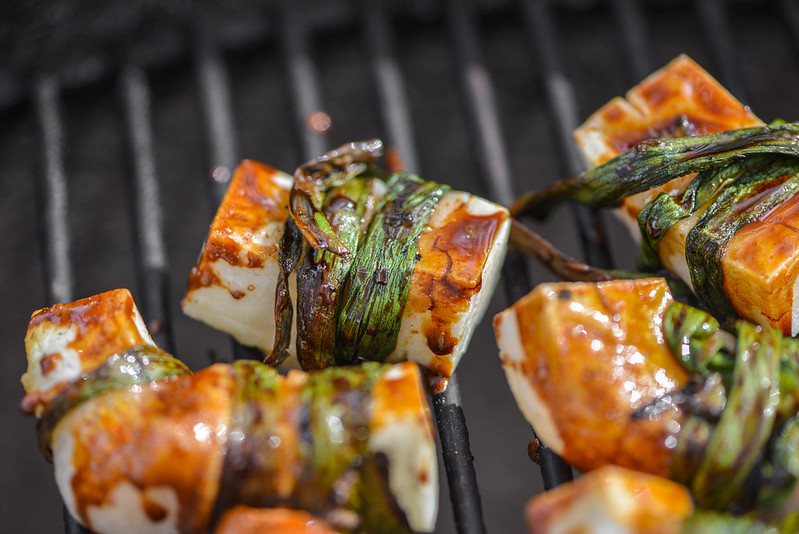 Not to leave the vegetarian crowd out of the mochi experience, I made a scallion-wrapped version as well. Just plain grilled mochi would be great on its own, but I felt like if I was giving other folks bacon, the veggie version deserved a wrapper too, and grilled scallions were definitely the right choice. 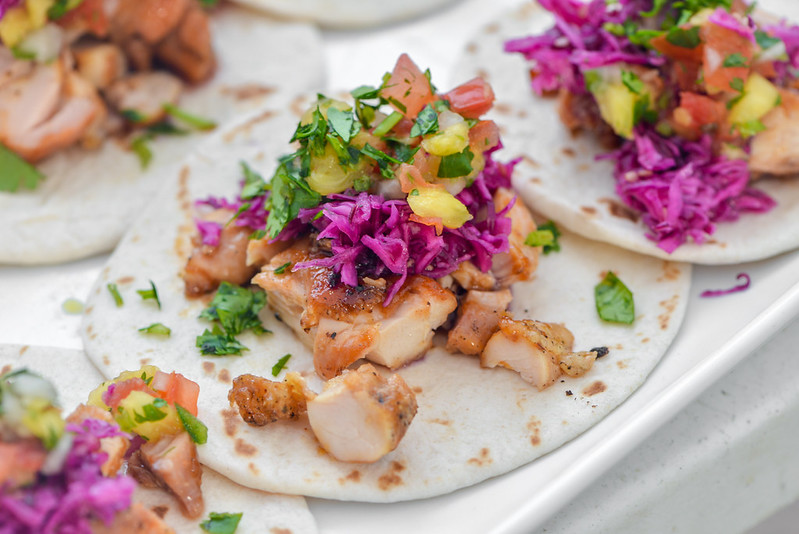 Now we move on to these huli huli chicken tacos. I've been making Hawaiian huli huli chicken from a recipe by Cook's Illustrated for awhile now, and while I'm pretty sure it's not very authentic, it's incredibly delicious. The pineapple-based sweet glaze has an incredible flavor that's great on chicken, and was even better in this taco form when paired with pineapple pico and a tangy red slaw. 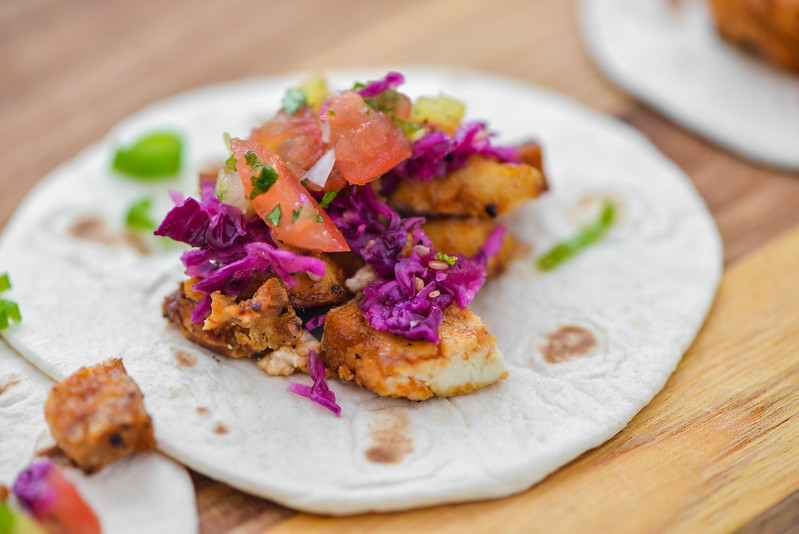 The sauce doesn't just do magic on chicken though, I made a tofu variation for the vegetarians that was equally as tasty. Really, since the sauce is doing all the flavoring here, there wasn't all that big of a difference between tofu and chicken versions of the tacos. 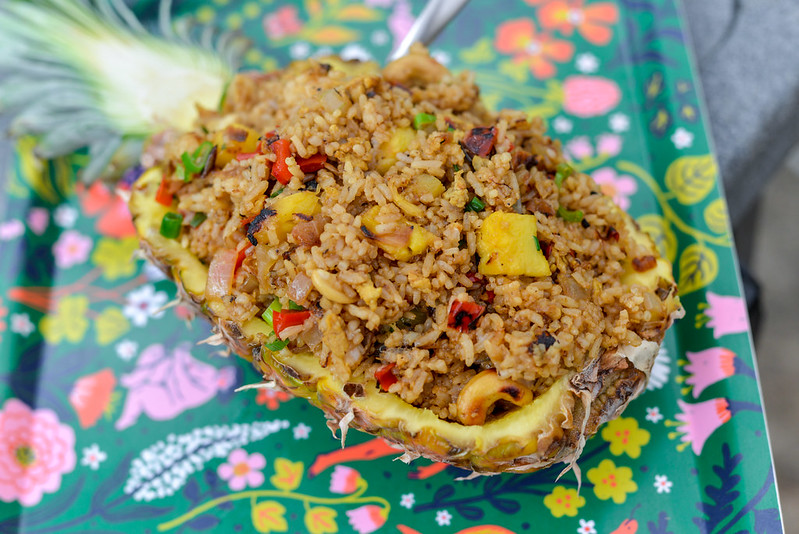 Last, but not least, in the food line-up was this grilled pineapple fried rice. My plan was to grill the pineapple, then nestle my wok in the coals to assemble the fried rice, but alas, my wok has a handle that made it too big for the grill. If your wok fits, the grill is a great way to use it because the high heat of the coals helps cook all the fried rice ingredients quickly, like they should be. This fried rice included onions, red pepper, grilled pineapple, cashews, and egg, and was seasoned with curry powder, garlic, and soy sauce. 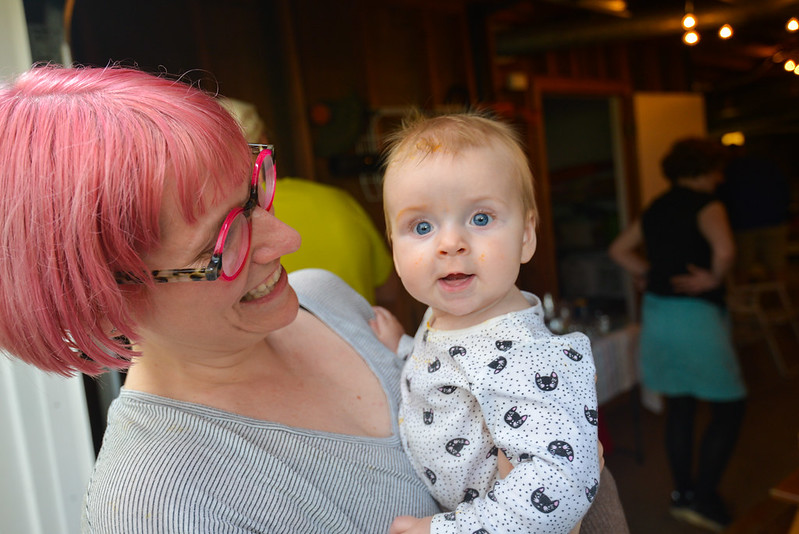 And now for all the lovely people who made the day extra special. We start with Brooks, who was much happier at this Meatwave than the last. Mommy Leslie was having a great time too. 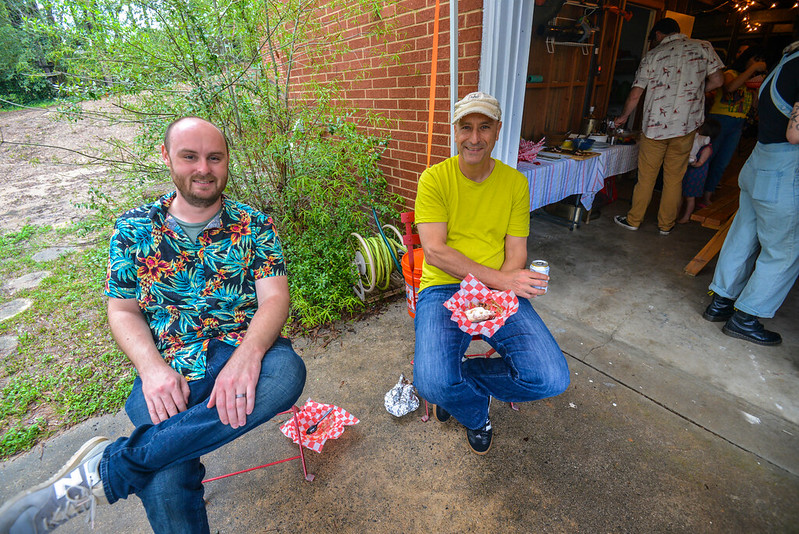 Next we have Ryan and Vincent, who sat outside with me while I was cooking and enjoyed detailed discussions on my efforts to grow grass in my yard that was turned into just a pile of dirt after some recent waterproofing work. 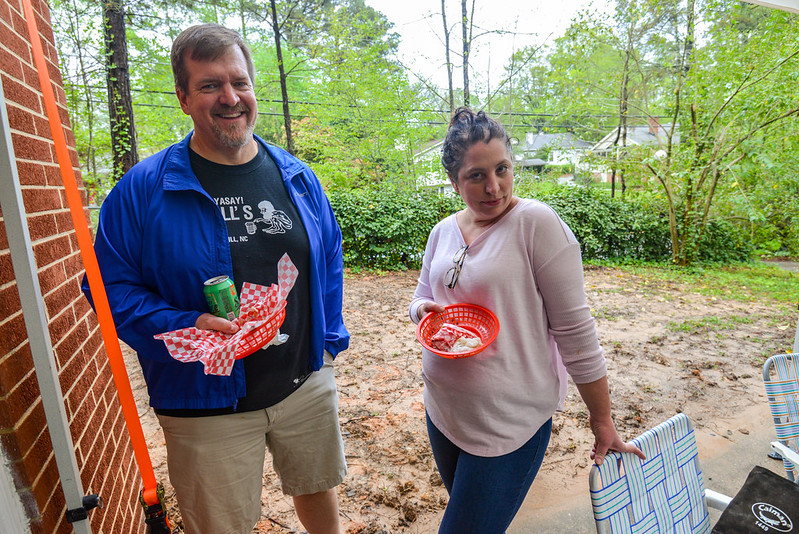 Here's Chris, times two. Boy Chris brought me an excellent giant cast iron meat fork he picked up at an estate sale recently. This is after he provided the sandwich wrap we're now using as basket liners from another estate sale last year. Seems like I need to get into this estate sale game and start collecting my own treasures. 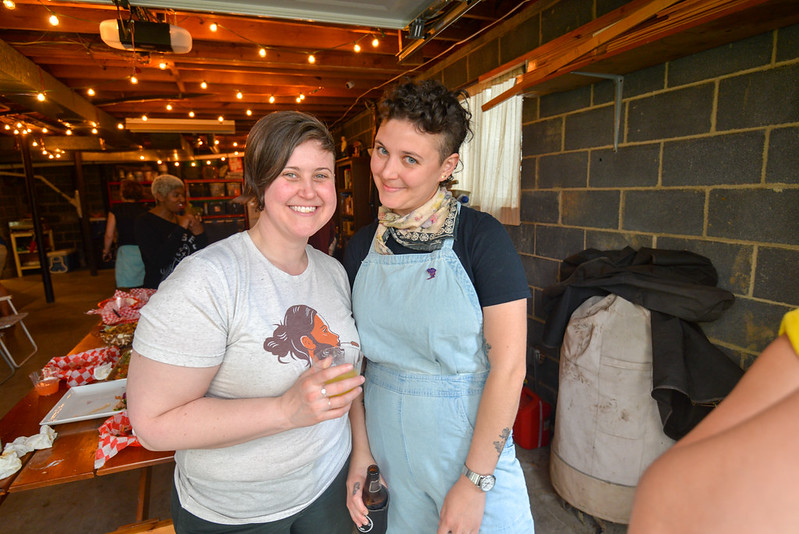 I think Christina and Chelsea are going to be my driving force in devising more seafood recipes, which my blog sorely lacks. They may be the first pescatarians we have, and when I decided to make the tuna nachos, I was specifically thinking about something they could eat and would enjoy, and they ended up loving those the most! 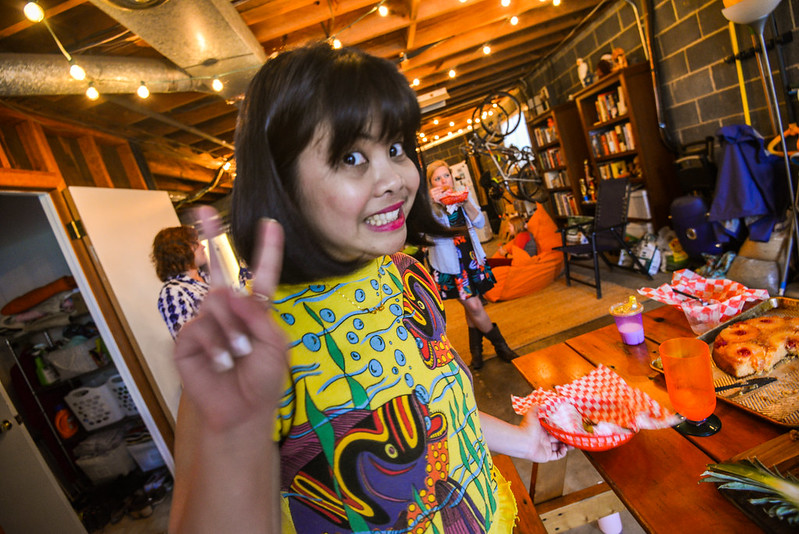 We'll close out the guest line-up with Kris, who was totally into the tiki theme. She made a giant bowl of tonga punch, which was so rummy that I thought we would never finish it. But by the end of the day, the punch was gone, people were sufficiently boozy, and there was a collective feeling that this was one the better, or best, Meatwaves we've had. Good thing I still have a lot more tiki recipes in the queue—we can probably make a tiki Meatwave a yearly tradition!