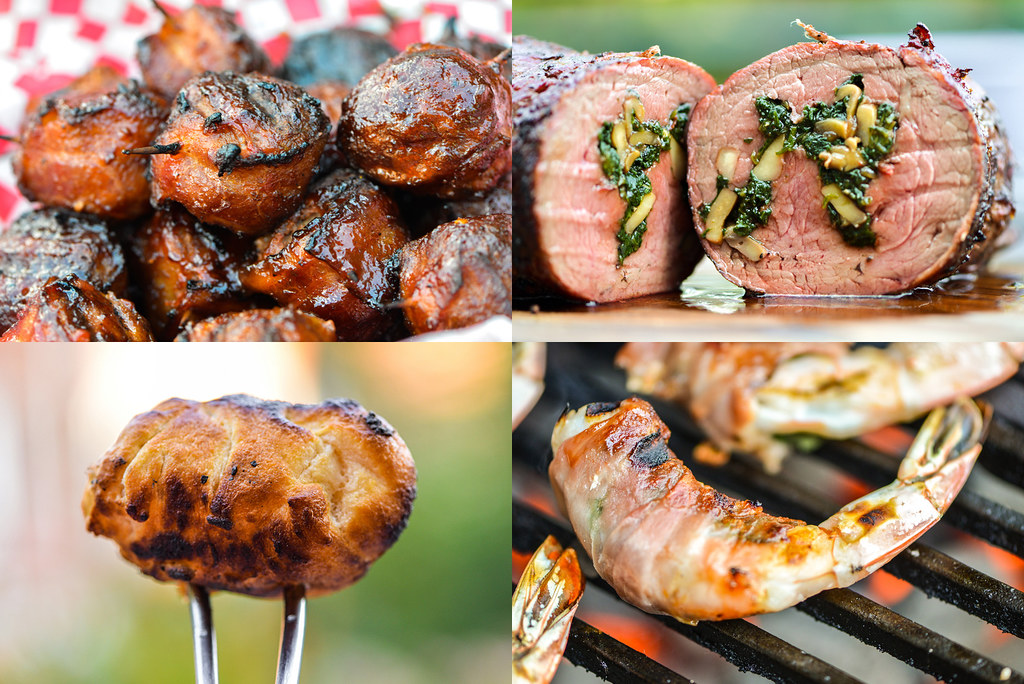 Looking back at last year's Meatwaves, I realized we went an entire summer without any meatwads! I was determined to fix that error this season, but with nearly two years to plan a revenge, the meatwads amassed an army of rolled and stuffed brethren we'd have to eat our way through first before reaching our true adversary. It was a noble fight, and we took it head on in the name of deliciousness. 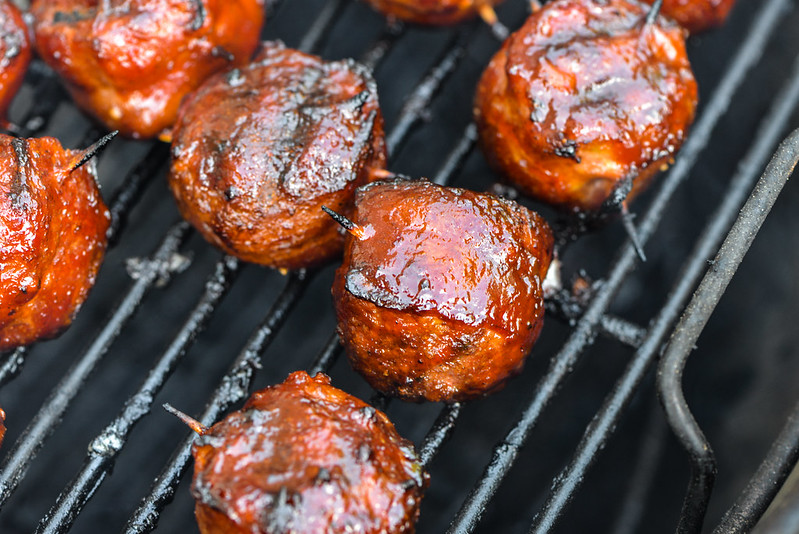 First wave of the attack came from these moink balls. For those in the barbecue blogging community, these should be pretty familiar, but for the uninitiated, they're meatballs wrapped in bacon, coated in a rub, smoked, and finished with barbecue sauce. The norm is to use frozen meatballs for these, but I'm a DIY type of guy, so I made my own beef and pork meatballs that turned out great. 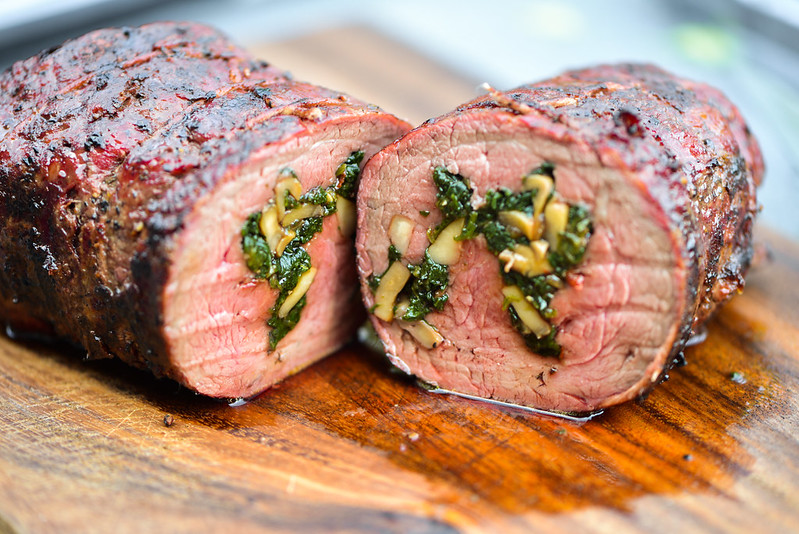 The initial forces were small potatoes compared to what came next—a mushroom and spinach stuffed beef tenderloin. Tenderloin lacks the beefy flavor I'm looking for from a chunk of cow, but it's great for stuffing, and this spinach and mushroom combo was pretty killer. A full four pounds of this roll disappeared in no time. 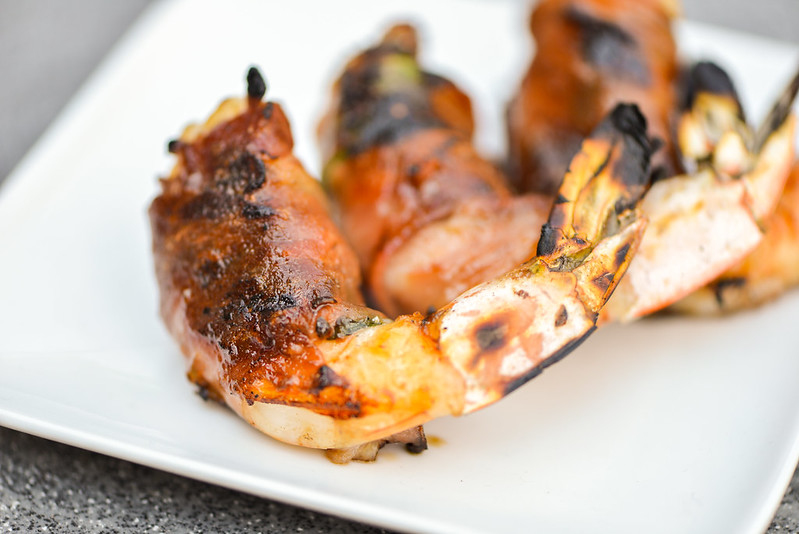 Then came the attack from the sea with these mozzarella-stuffed, basil and prosciutto wrapped shrimp. Not much of a shrimp fan in the past, these flavor-added incarnations are starting to change that, and I was all too happy to do my part in devouring these delicious crustaceans throughout the day. 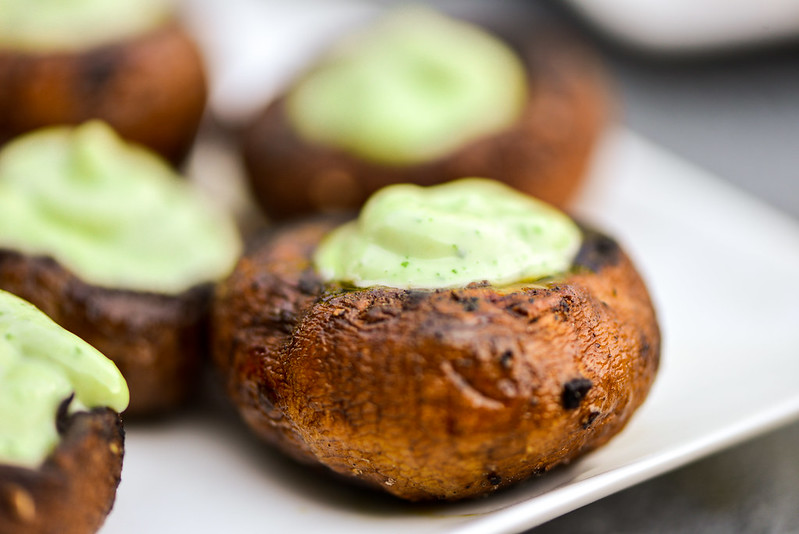 In case the force of the meat wasn't enough, the meatwads sent in a few battalions of vegetable back-ups. Cremini mushrooms stuffed with a basil and parmesan mayo represented a valiant effort, but like all that came before, Meatwavers made quick work of these. 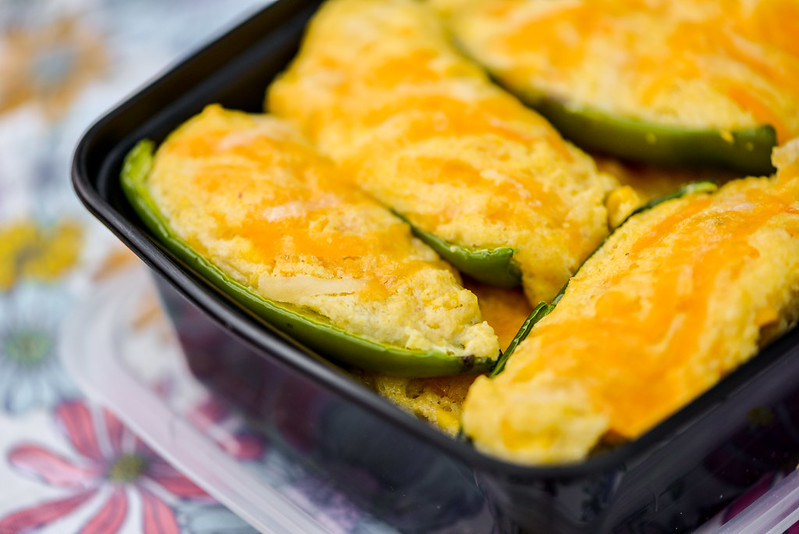 Surprise auxiliary troops tried their best to hold us back, but not even the filling power of these cornbread-stuffed jalapenos provided by Karla and Craig could hold us back. 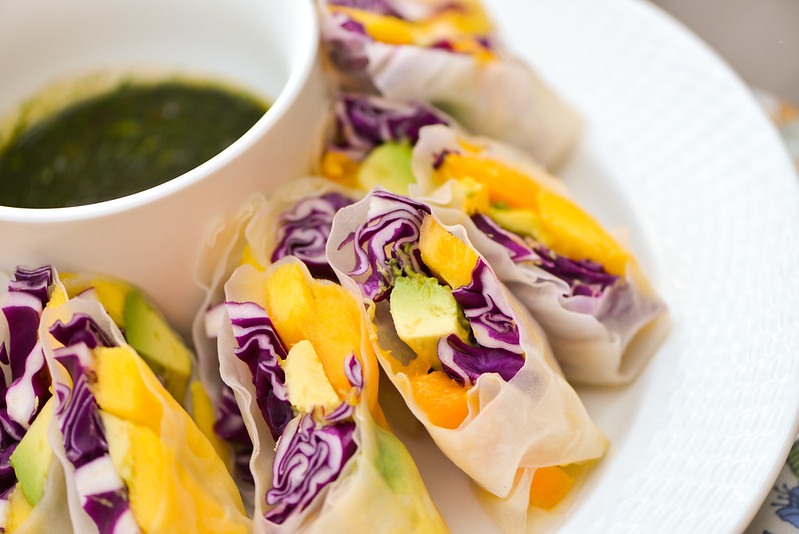 Same goes for Kris's contribution of mango and avocado summer rolls, which were one of the most welcome dishes on that hot and humid day, but also were easily eaten through. 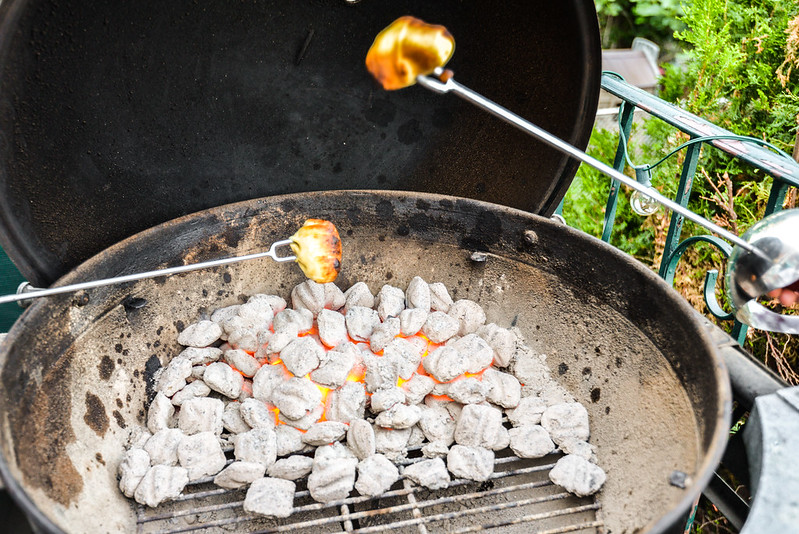 So it was down to just us and the meatwads. Seeing as a Meatwavers hunger has no bounds, all quickly went into action assembling and grilling these long missed pockets of deliciousness. If you've come all this way and still don't know what a meatwad is, it's simply a little smoky and cheese curd wrapped together in Pillsbury crescent roll dough, skewered, and roasted over a large fire (a pile of hot coals does the trick lacking an open fire). Their simplicity is deceiving, as so much good comes is such a little packets. 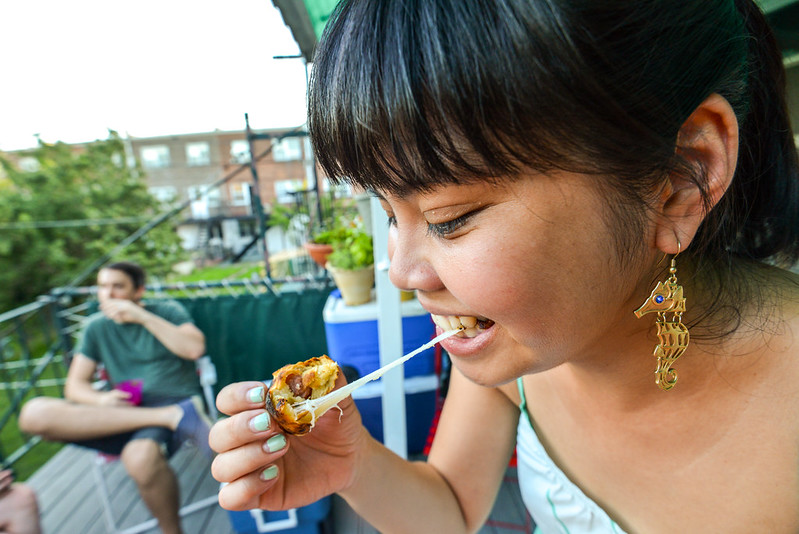 Hot seasoned beef, melty stringy cheese, and buttery dough define the meatwad, and as you can see here, Kris took on the good fight and won hands down. Such smiles and joy are common in a battle with meatwads. 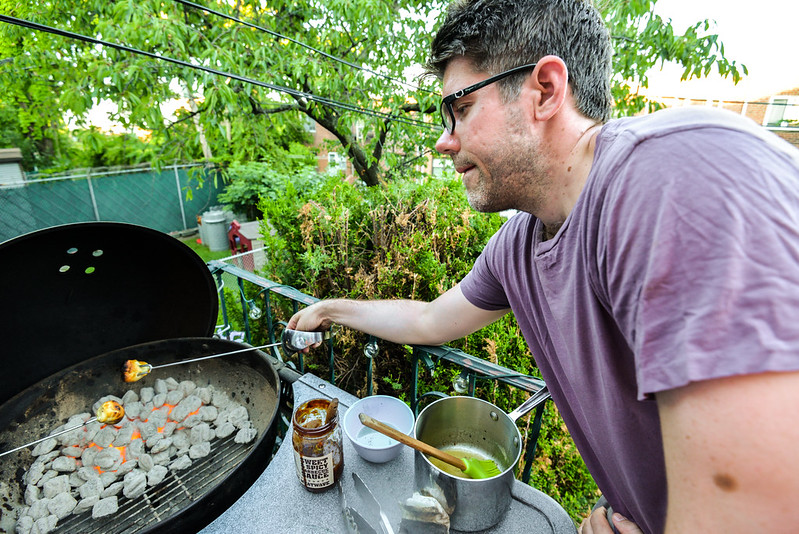 Matt is perfecting his meatwad technique here, finding that often elusive sweet spot between undercooking or over charring the dough. The perfect meatwad should be nicely browned with only a little spotty char. 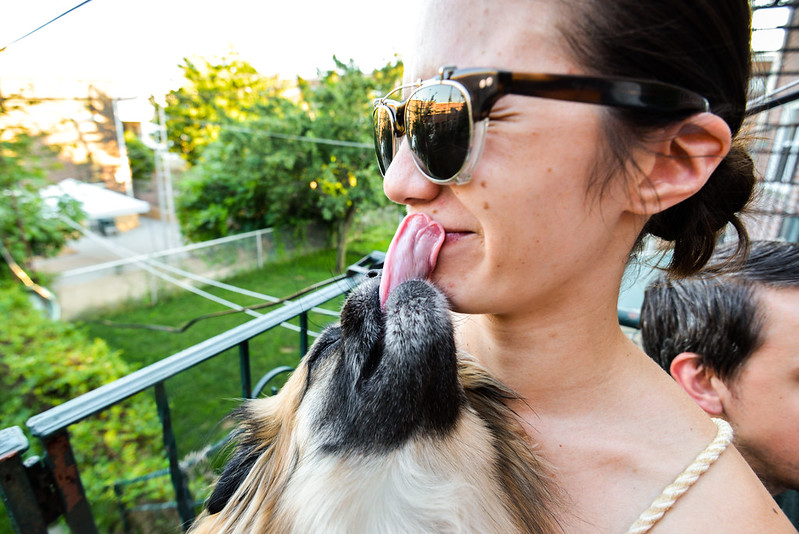 Marissa must have just finished her meatwad, because Reggie sure found something delicious about her lips. 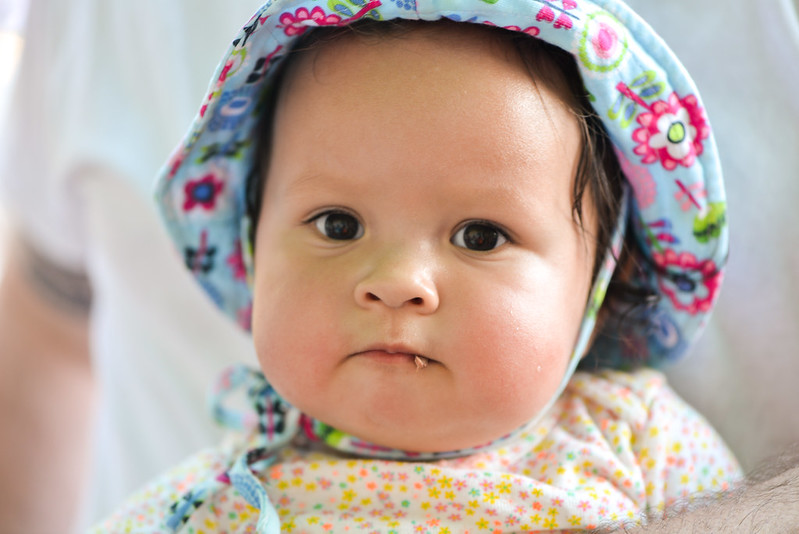 Little Margot attended her first Meatwave ever, and while she didn't stay around long enough to take on the invasion of the meatwads, the little piece of beef tenderloin lingering on her lips certainly gives her instant Meatwave cred. 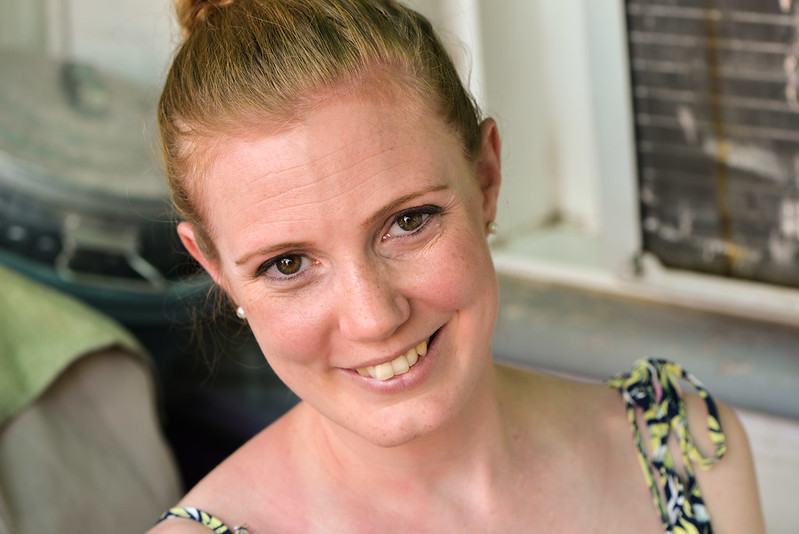 Erin came all the way from Chicago just to help us in this intense battle. I'm sure that's that real reason for her visit, even if she'll tell you it was to see her man Matt. 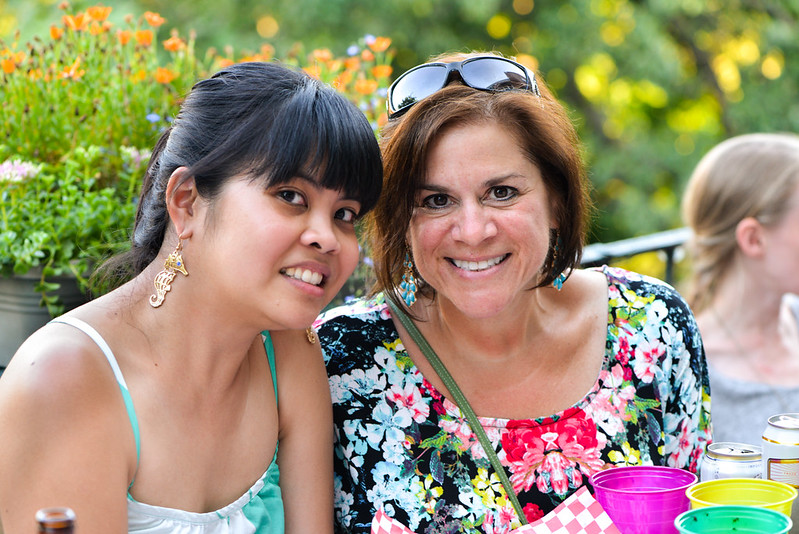 My Aunt Jeanne even made it out, coming with my mother and their fried Nancy. She took a to-go container for my always vocal Uncle Ronny, and I've yet to hear a peep about his meat, so I'm not sure if that's a good or bad thing. 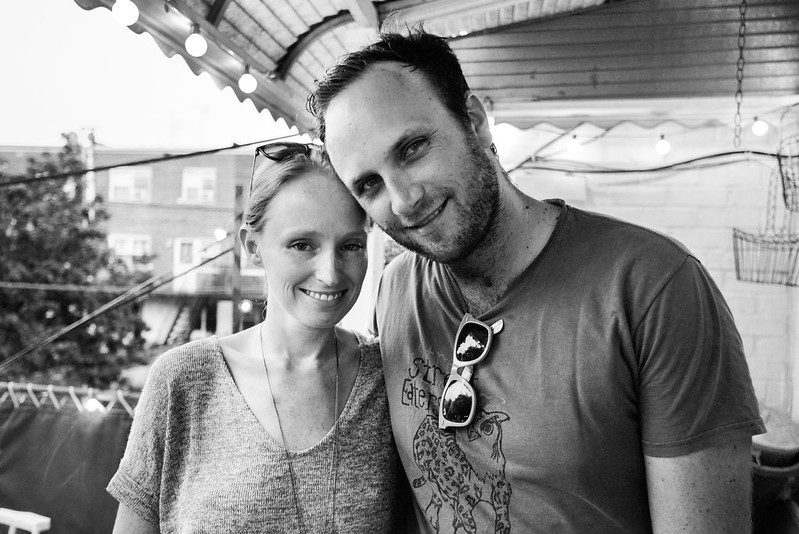 Karla and Craig get special props for bringing not only the stuffed jalapenos that I love (and will eventually steal the recipe for), but also a jug of watermelon puree for the cooling summer drinks we desperately needed on that awfully hot day. 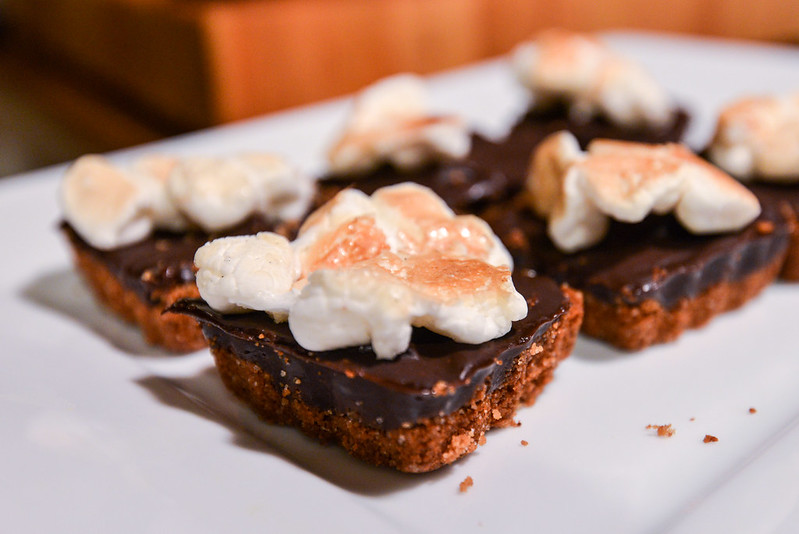 With the meat all gone and war won, we sat back in the cool a/c and ended the evening with these s'mores tartlets. Graham cracker crust was stuffed into a small tart pan, baked, and topped with a chocolate ganache. Then after fully cooled, the tarts were adorned with roasted mini-marshmallows to make a dessert I'm hoping might bring home a first place at my upcoming first competition of the summer. Until then, I need to recover from such a grueling day that left me overstuffed, exhausted, and felling vindicated that we once again took on the meatwads and came out victorious.