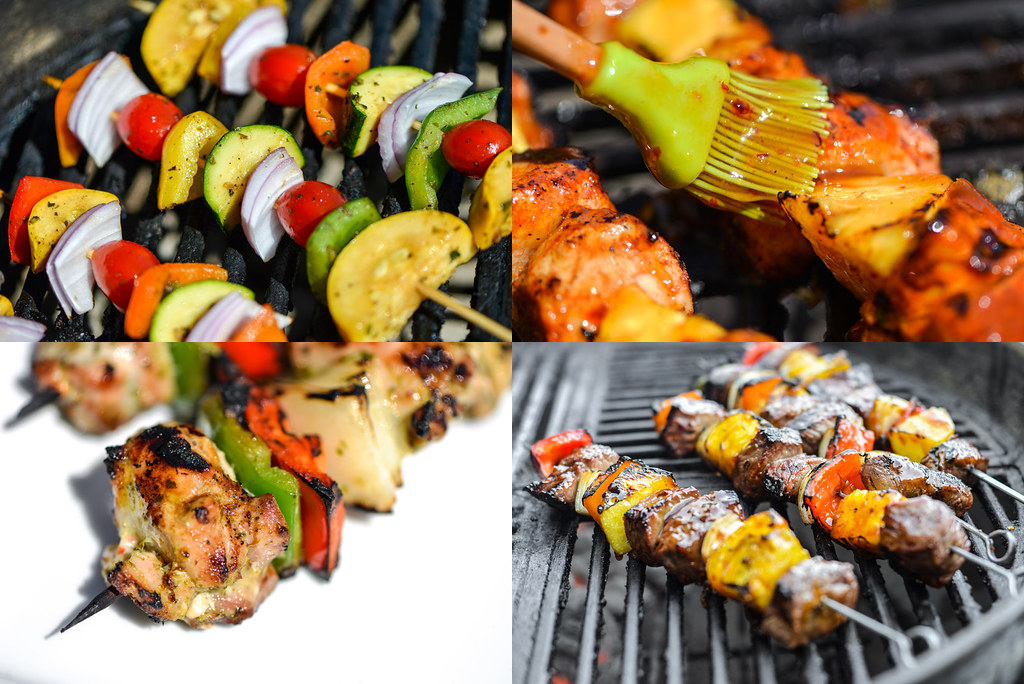 It's official, the eleventh season of The Meatwave is underway! On a beautiful, sunny Sunday afternoon this past weekend, those of us neglecting our mothers gathered and partook in what has become a true tradition of the spring and summer. As I prepared for this kickoff throughout the week, finding myself sweeping the leaves from the deck, wiping the dust of the windowsills, and replacing string lights squirrels had confused for food, an inevitable excitement began brewing in anticipation of the fun, food, and overall good times the Meatwave always brings. With the start growing closer, I compulsively checked my guest list and rejoiced in each new rsvp that had me looking forward to being with friends I likely hadn't seen since the fall, as well the ones I was soon to make. When the day finally arrived and I was putting the finising touches on a plethora of kabobs, the doorbell rang, and just like that the meat starting flowing once again. 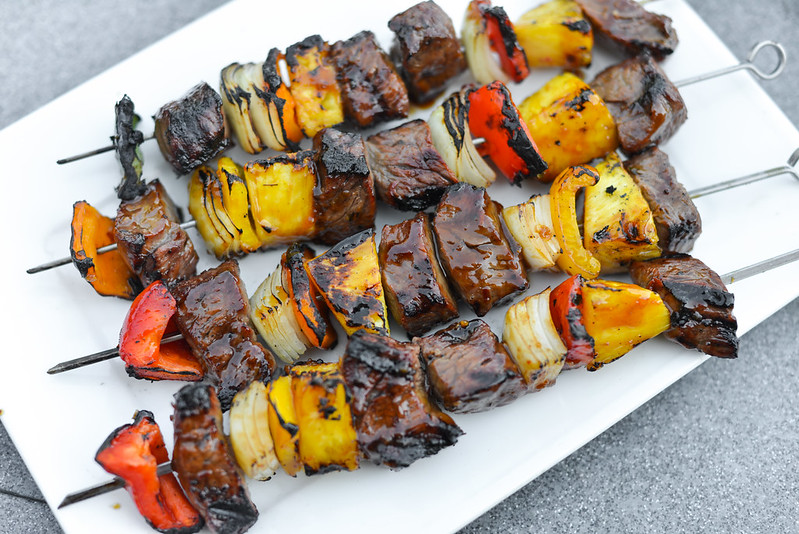 A "plethora" of kabobs may be an understatement—to kick off the Meatwave in grand style, I prepped nine different skewer variations. So get comfy, because this is going to be one hell of a list to get through, but each kabob was so good, I couldn't imagine leaving any out of the recap.

To start us off, I grilled up these ginger-teriyaki kabobs. Cubed sirloin was marinated in a teriyaki sauce enhanced by ginger, garlic, and pineapple juice. The beef was then skewered, alternating with sweet onions, sweet peppers, and pineapple, then grilled and finished with a brushing of some reserved marinade. Sweet with a little bite, these tender beef kabobs were an excellent way to kick things off, and ended up being the most popular of the day among the many Meatwavers. 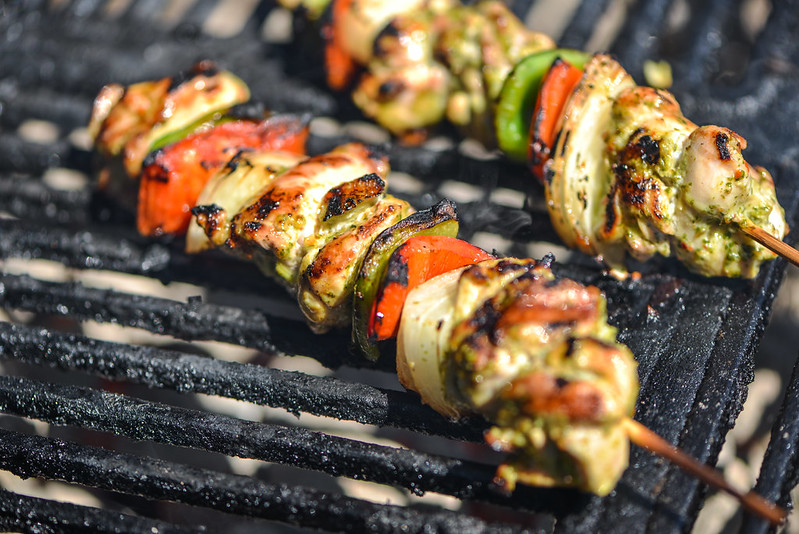 Next up were chicken fajita skewers. Having finally worked out a really good chicken fajita recipe, I wanted to see how much milage I could get out that cilantro and lime based marinade. It did not disappoint here as the flavorful chicken thighs got a fresh and tangy boost from the marinade that came together with the red and green peppers and onions to deliver all that's good with fajitas, minus the tortilla, of course. 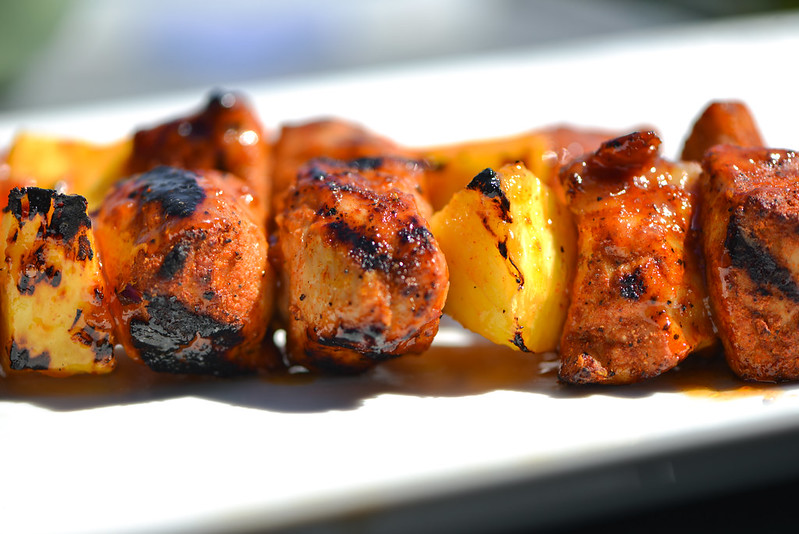 One of my personal favorites of the day were these sweet and spicy apricot-glazed pork kabobs. Brined pork chops were tossed with an earthy and spicy rub, then skewered along with pineapple that I had leftover from the teriyaki beef. They were grilled, then slathered with an apricot-chipotle glaze that left them glistening. The light pork let the complex layers of flavor shine through and the interplay between the spicy rub and sweet glaze made for one tasty skewer. 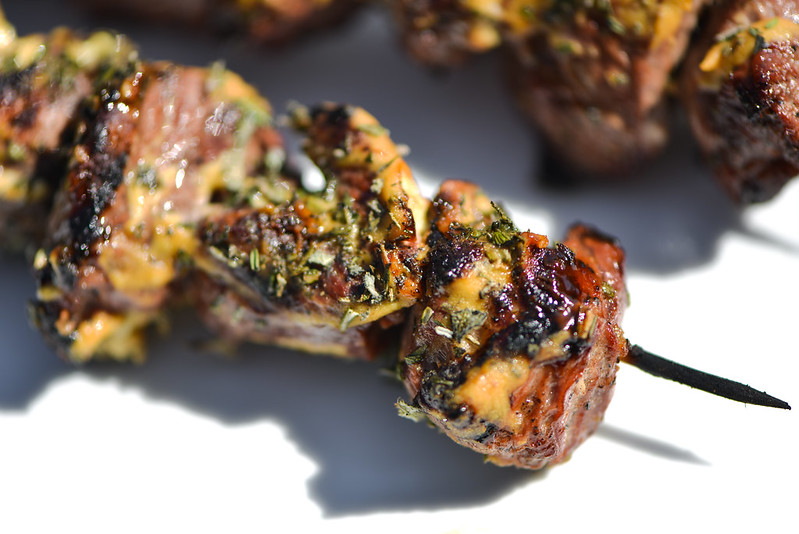 Rounding out the four major meat ground was lamb. I have done a mustard and herb crusted rack of lamb before that I really loved, and thought kabobs done in this style would be equally delicious. To inject more flavor into the meat, I first marinated cubed leg of lamb in a lemon and oil mixture before they were threaded onto skewers. The lamb was then seared of high high, brought of indirect heat, and brushed with mustard and sprinkled with a mixture of herbs. Once that herb crust was baked in a bit and the lamb hit a nice medium, they were ready to go. The rich flavor of the lamb was made even better thanks to the fresh herbs, as well as the tangy mustard that added a touch of heat as well. 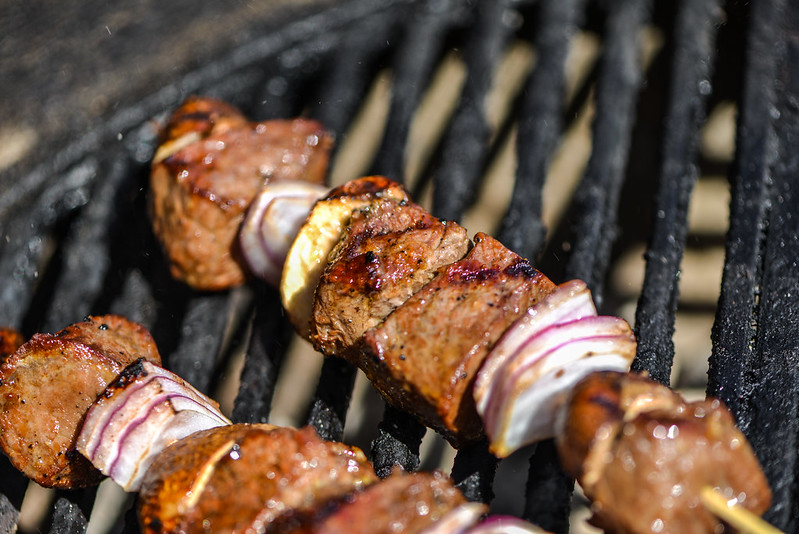 Circling back to beef, I called these skewers "steakhouse kabobs." I named them so for their marinade that was comprised of big steakhouse flavors like Worcestershire, soy sauce, lemon juice, and mustard. The beef soaked in this robust marinade, which turned into a well caramelized crust after being grilled. Mushrooms and onions completed the steakhouse equation to deliver one beefy, heavy meal on a stick. 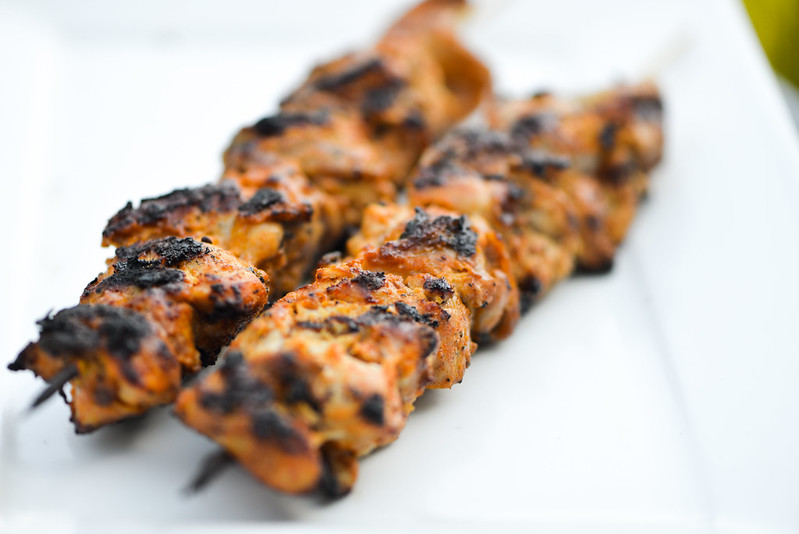 These smoky and spicy chicken skewers were made a bit on whim, and I was surprised on how great they were for so little thought that actually went into them. I was thinking about making a tandoori style chicken, but decided to switch things up by skipping the garam masala and going in with a heavy dose of both hot and smoked paprikas. This left the skewers an attractive reddish color that was both smoky and spicy, but not so much that it masked the ginger, garlic, and lemon that was also in play. 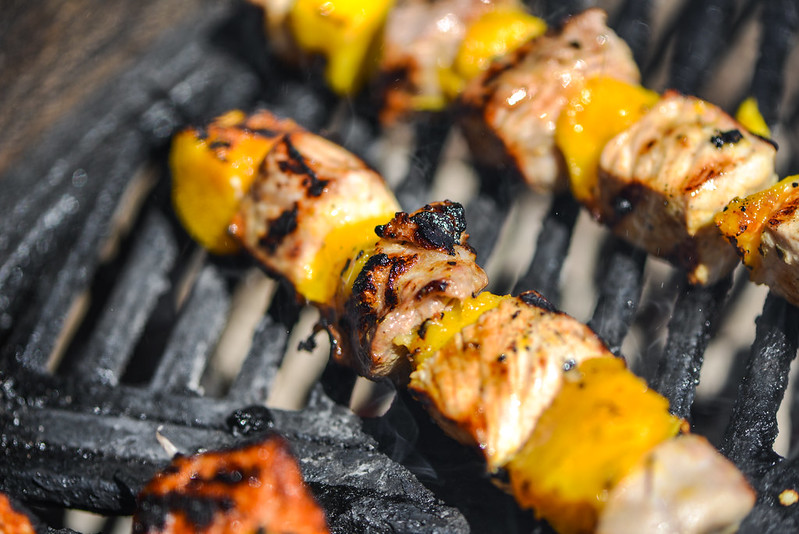 Ever since discovering mojo being the "secret" ingredient to one of my favorite rotisserie chickens, I've been experimenting with using this garlicky sour orange sauce in a variety of applications. Kabobs was just the latest of these trials as I marinated cubed pork in that acidic sauce, skewered them with some mango slices thrown in, and finally grilled until seared and the pork was medium to medium-well. The mojo certainly left its mark on meat—these kabobs had the tangy and garlicky flavor I would expect from such a powerful sauce. 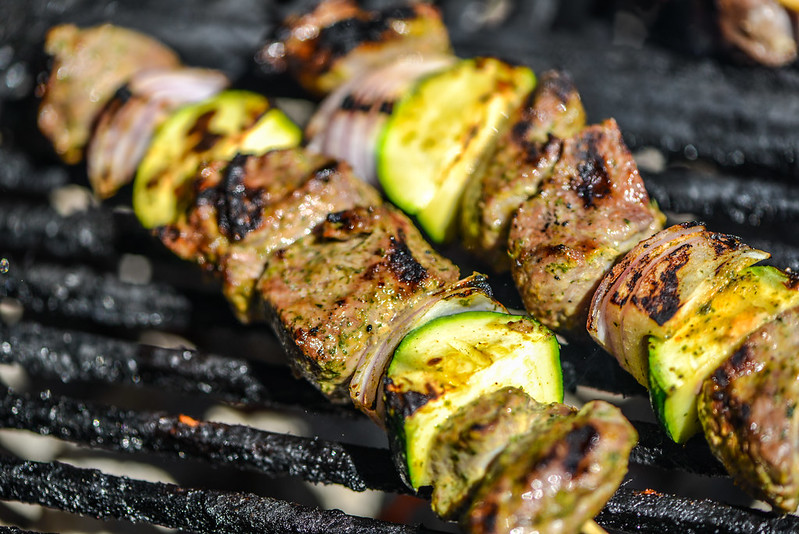 Last, but not least, in the meat category were yogurt and mint marinaded lamb skewers. These were more tender than the herb-crusted lamb, but also more subdued as the mint didn't impart as much flavor as the herbs did. They were more lamb-y, in a good way that had me going back for seconds. 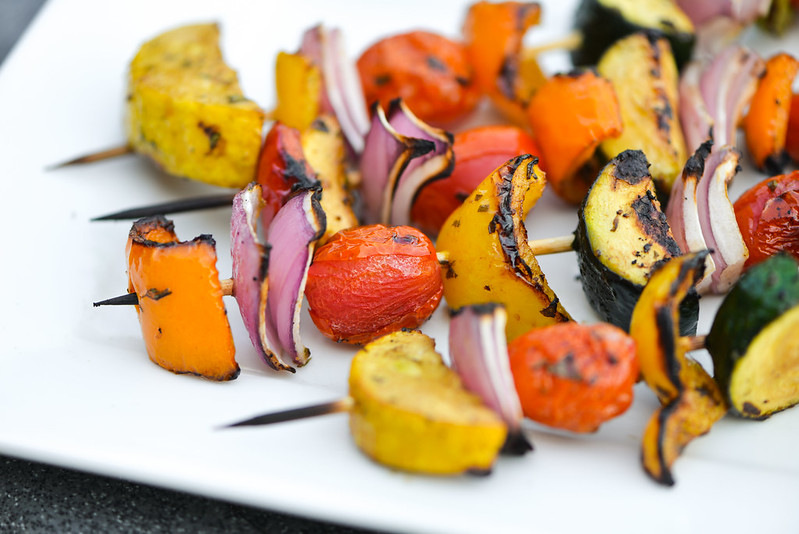 Finally, there were the obligatory meatless skewers. A medley of flavors and colors—these were made of sweet peppers, zucchini, yellow squash, grape tomatoes, and red onion. For enhanced flavor, the veggies were marinaded in a balsamic vinaigrette which added a touch of tang to the sweet grilled veggies. 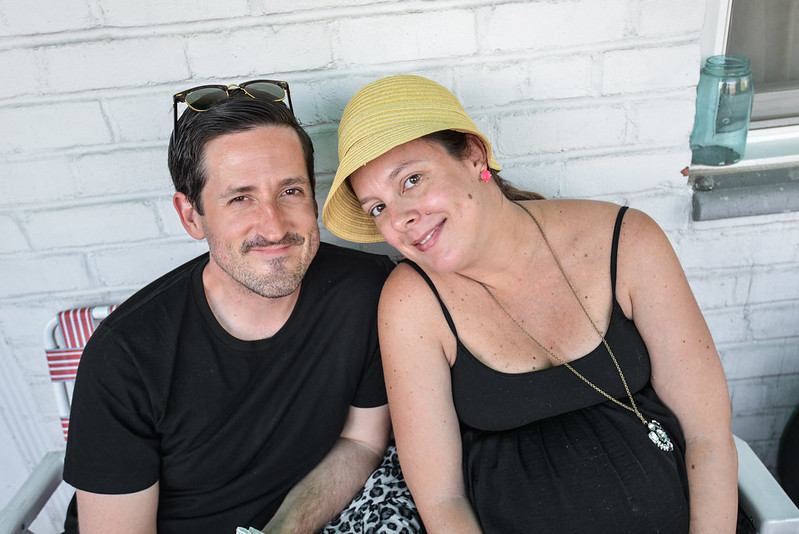 Daphne and Blair have the distinction of being the first guests of the 11th Meatwave season. If things had gone as planned, Daph would have had a second little girl by now, but I feel like that baby held on at least a few days more because she really, really wanted to come to the Meatwave. The Meatwave also has a proven baby track record for expectant mothers—at least two little tikes were born within two days of coming to the Meatwave—so here's to hoping to keep that streak alive. 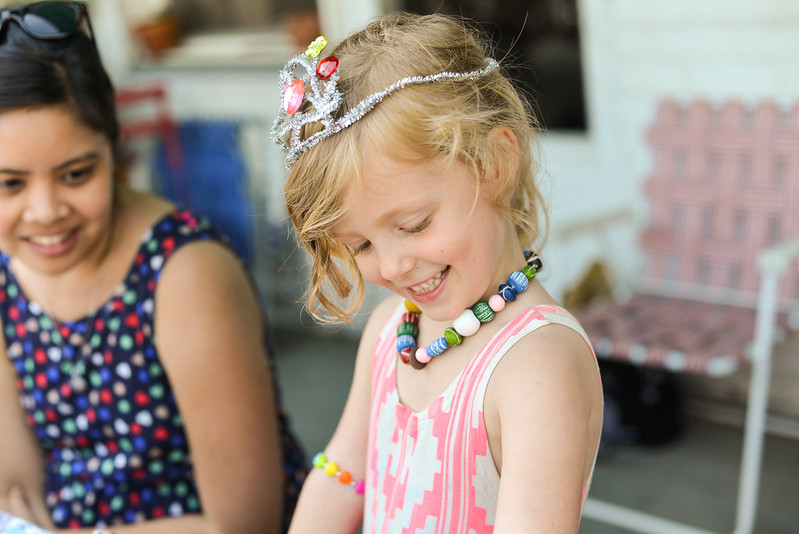 And then we have little princess who's about to become the best big sister ever—Mia! It took a little while for her mid-afternoon, post-nap grumpiness to wear off—I don't think I've ever seen anyone look so sullen while eating a donut—but by the end of the day Mia was nothing but a burst of singing and dancing energy. 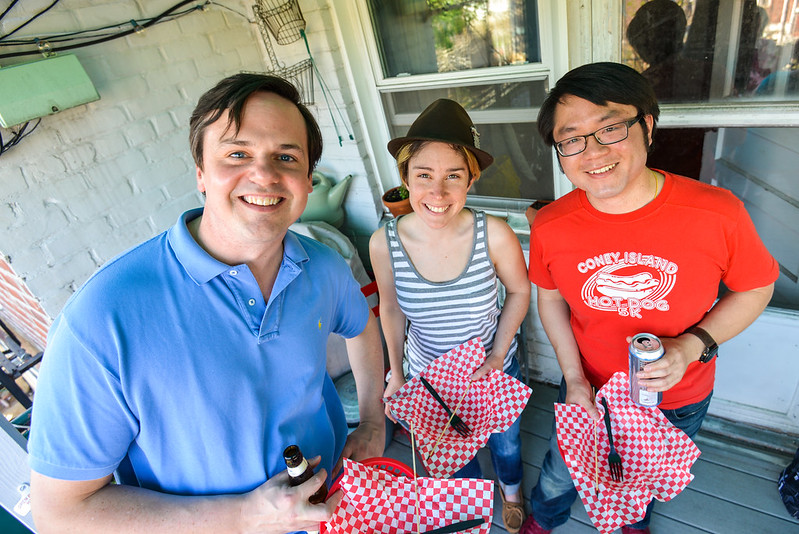 Next we have Kevin, Eloísa, and Chris. Fresh off a great sale of booze books at the Kickstarter block party last weekend, Kevin was down for some relaxing, food, and booze. Chris, the ever faithful Meatwaver, brought Eloísa, a Spanish native who made me very happy in confirming the croquettes I made recently were as good as I thought they were. 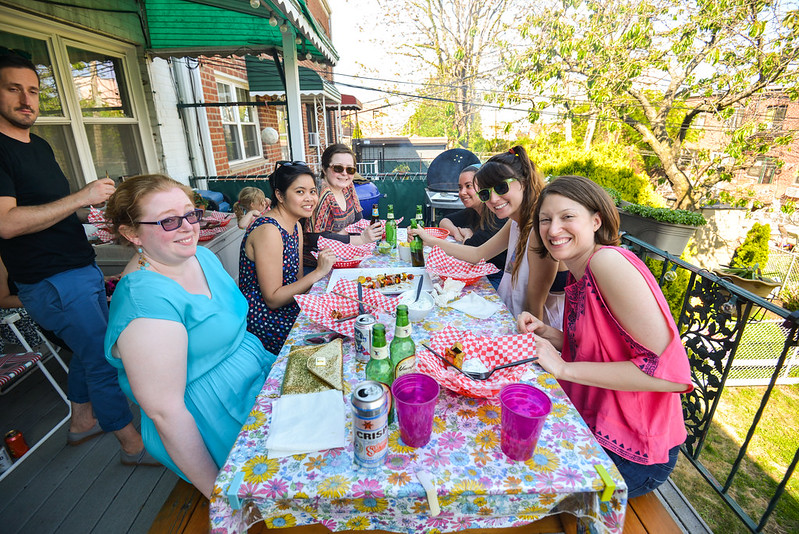 Kristin's co-workers have been killing it on the Meatwave. I've been so happy to have so many new and enthusiastic faces at the end of last summer, and now into this year. At the table here we have the Penguin crew and beyond including Natalie, Maggie, Clarisa, Naomi, and Kristin. 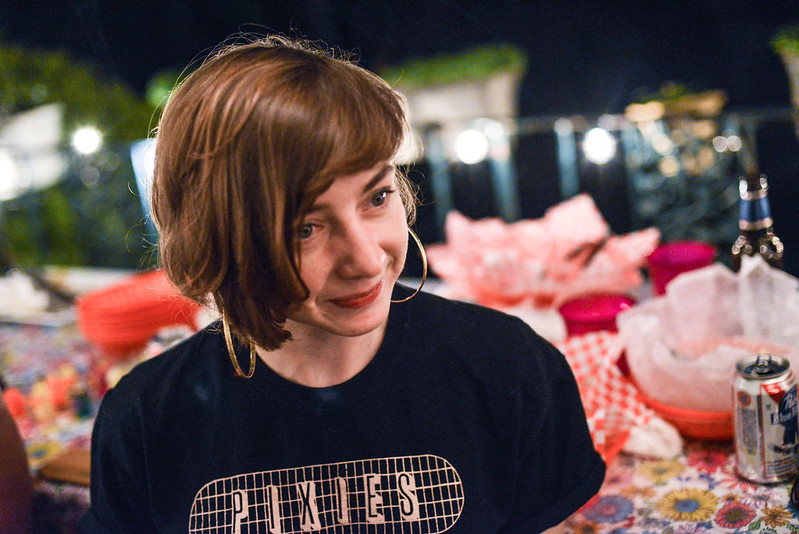 I didn't make any sides or desserts for this Meatwave. That left us all craving a little something else after so many skewers of meat—especially a sweet treat. Anna was our saviour, arriving just in time with a giant tub of the best lemon squares any of use had ever tasted. I certainly ate more than my fair share, then hoarded enough leftovers to last a week, but finished them in one day 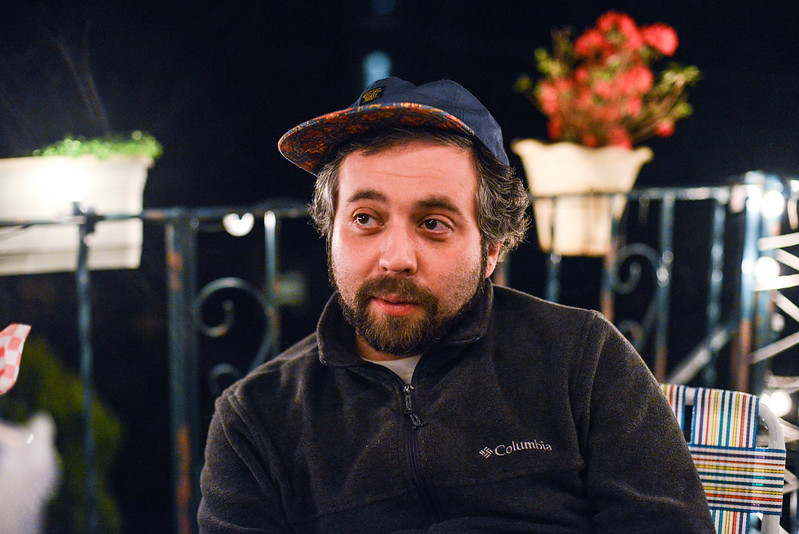 Finally we have a late night addition, Jonny. I was so happy he was able to make it out—with the busy life of a surgeon, it's not often I get to see Jon, so I value the little time we get to spend together. I was only too happy to fulfill his request for a grilled cheese, which came out beautifully over the dying heat of a live fire.

As you probably inferred already, this was one hell of a Meatwave. Putting together these barbecues is a lot of work, and each year I feel like I sour a little on the effort it takes and wonder if it's time to stop, but the second everyone is together, sitting in the warm sun with cold beers and delicious food, every ounce of energy put into the Meatwave is worth it a thousand times over. There really is nothing I love more than this tradition, and I can't wait to see where this season will take us.