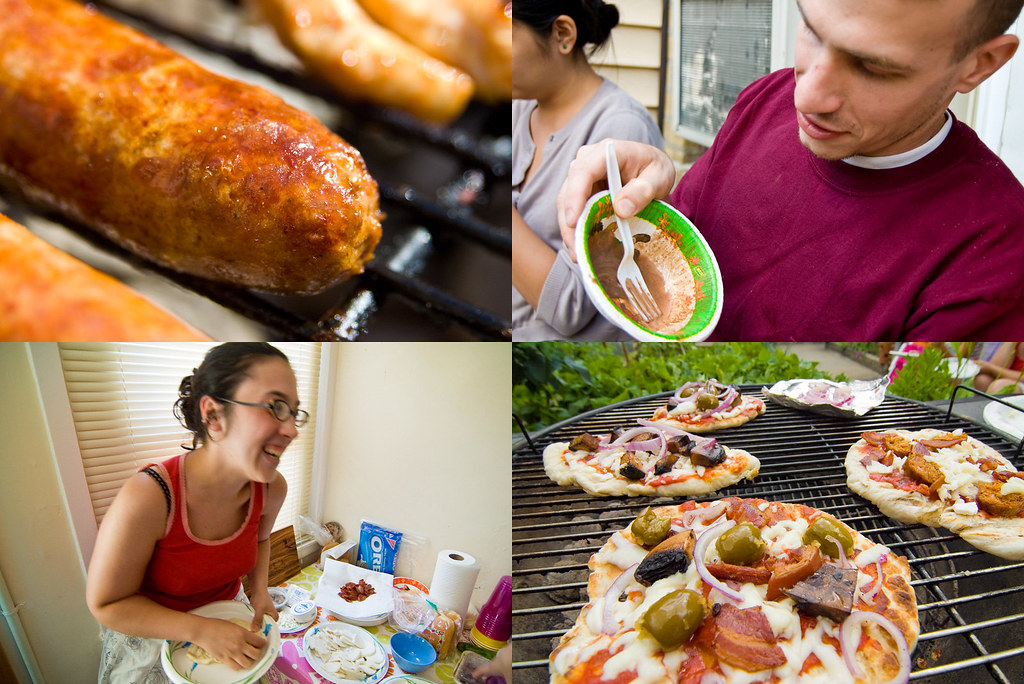 When we first moved here, we were advised by Kristin's former roommate that the Astoria Pool was dirty and to stay away at all costs. Based on her advice, we steered clear of it for three years, until the heat broke us down and we eventually could not live without the refreshing cool waters of a pool one second more. How wrong her roommate was about the pool (we have come to learn she was filled with only bad advice), it's an oasis in this hot, sticky city: clean, huge, refreshing, free, and with a decent snack bar to top it off (yay mozzarella sticks). So after an unbearably humid NYC summer week, we couldn't wait to get into the pool, which only opened this past Friday. Kristin and I were the only ones to actually make it out for a swim, but everyone joined us at the homestead afterward for the grilling of pizza, making this Swim Meat totally kick ass. 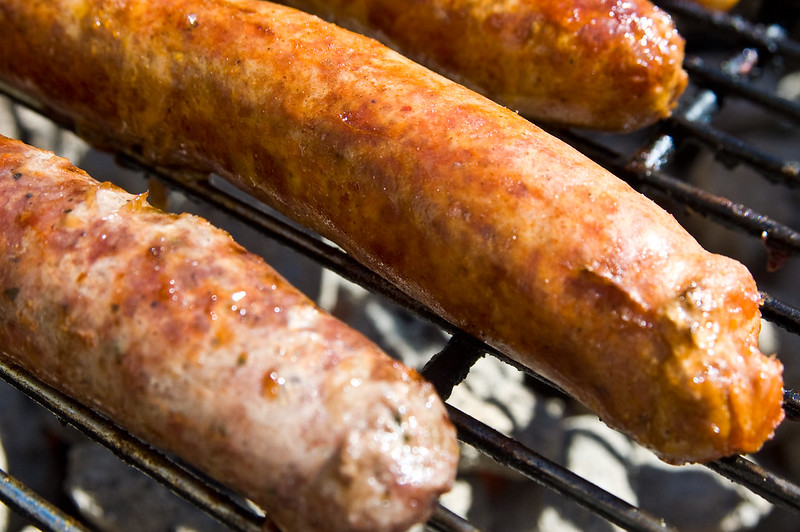 The prep for Swim Meat started on Saturday, when I spent the day making Italian sausages, chocolate ice cream, pizza sauce, and picking up some pizza dough from the great Rizzo's on Steinway. On Sunday, people trickled in, each with new and exciting toppings to make our pizzas some of the best around. Everyone was in top Meatwave form, bringing toppings that we could grill before they went on the pizzas. We cooked up my sausage, Tea's chicken, and Kaitlin's onions, while Kris provided 2 types of ricotta and mozzarella. 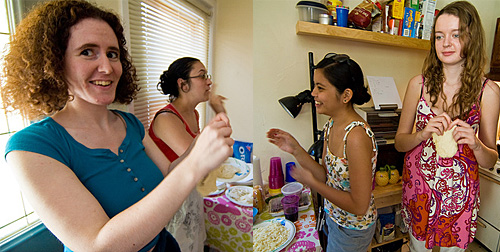 After letting the dough rise more in the morning, we divided it up evenly amongst ourselves and started stretching. Tea was invaluable with her knowledge of pizza dough, helping us all get the most out of the dough to make the most perfect pizzas. After a short time over the hot coals, the dough was nice and crisp and ready for those excellent grilled toppings I was talking about. 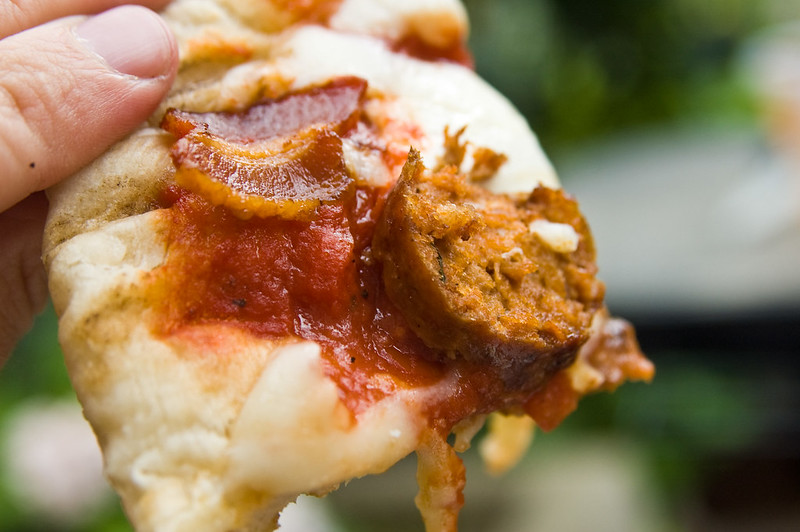 Grilling pizza is one of my favorite Meatwave practices. Everyone was involved with the ccooking and we ended up with a lot very unique pizzas. My first had hot Italian sausage, bacon, and mozzarella. Second pie had grilled zucchini, ricotta, and mozzarella. If I had been smart, I would have kept track of people's pizza combinations and reported back, but alas, I am not that forward thinking. I can tell you we had some excellent pizzas and there was some good sharing of the creations going on, you just have to take my word on it. 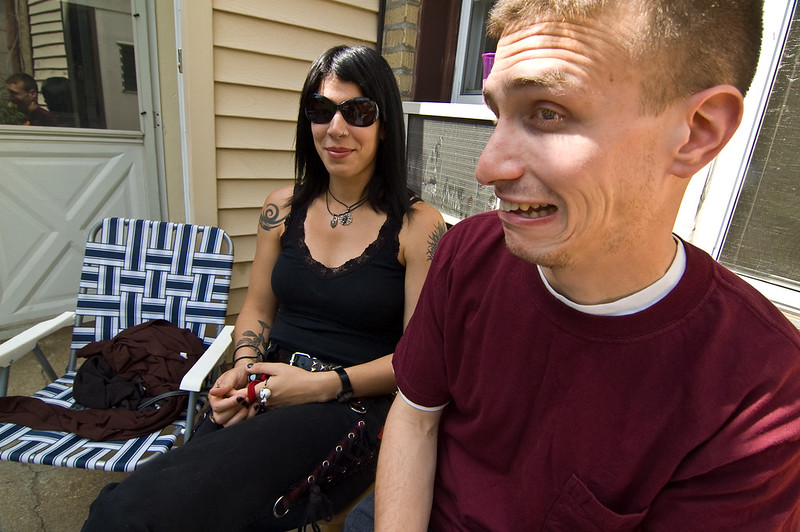 Swim Meat marked the great return of Petey D and Roni. Second only to Mike in Meatwave attendance, they are true die hard Meatwavers. Their absence, while on and extended vacation in Israel, left a hole in the Meatwave almost as big as the ones I'm sure it left in their hearts. Pete and Roni also contribute the most in the way of meat, and I'm hoping having them back means I'll be able to share some recipes for the awesome Middle Eastern chicken and lamb their so known for. 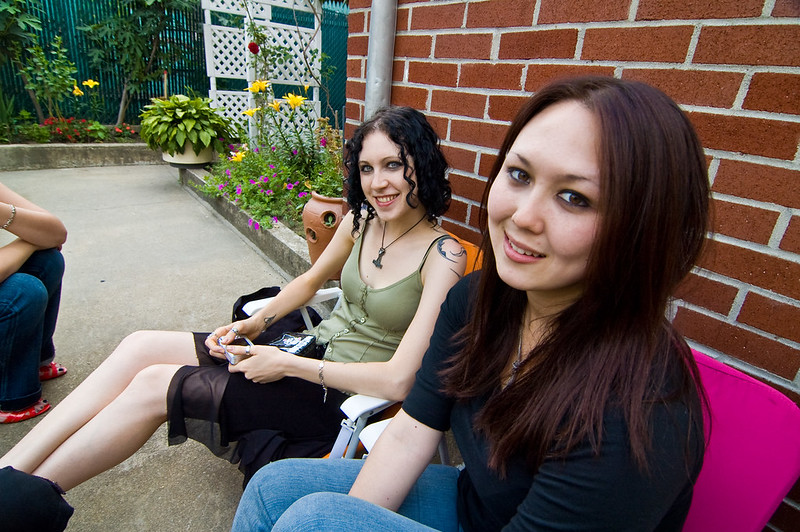 Being the fanatic Meatwavers they are, Pete and Roni are also key in spreading the Meatwave gospel. When a call came in that 3 of Roni's friends were wandering Astoria Park and requested her to join them, she promptly turned the tables and told them they should be at The Meatwave, getting them all to come over and join in the great grilling of pizza. 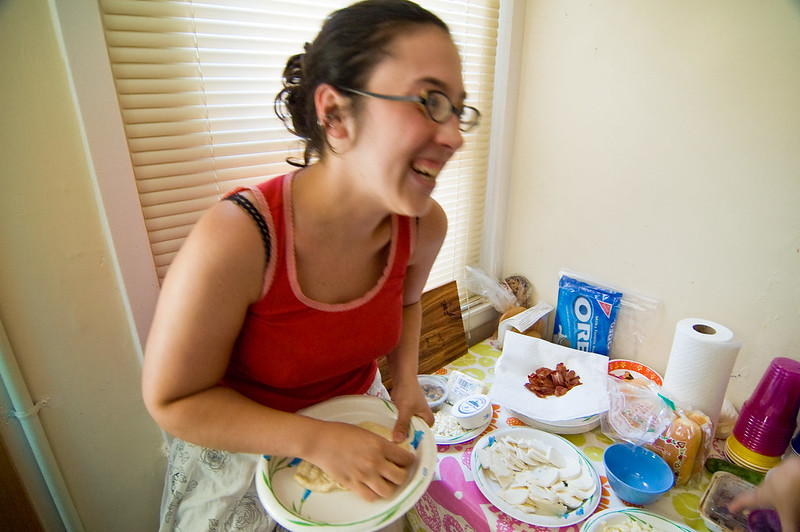 Also back from a stint studying in North Carolina was Kaitlin. I believe Kait would have also joined us for some swimming, except the airline lost her luggage that had her bathing while she attempted to fly home during Tuesday's massive thunderstorms. What's important is she was back safe at The Meatwave, and brought the tasty veggie toppings of onions and mushrooms. 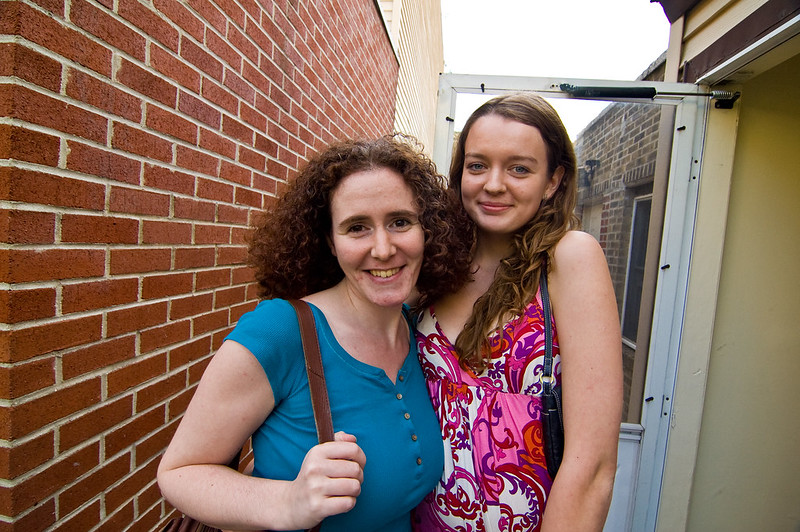 Tea made the Meatwave intercontinental this week by bringing along her friend Rosie from overseas. Not only that, but she's responsible for all the bacon and bbq chicken on the pizzas, not to mention the more exotic (in pizza terms) goat and blue cheeses. 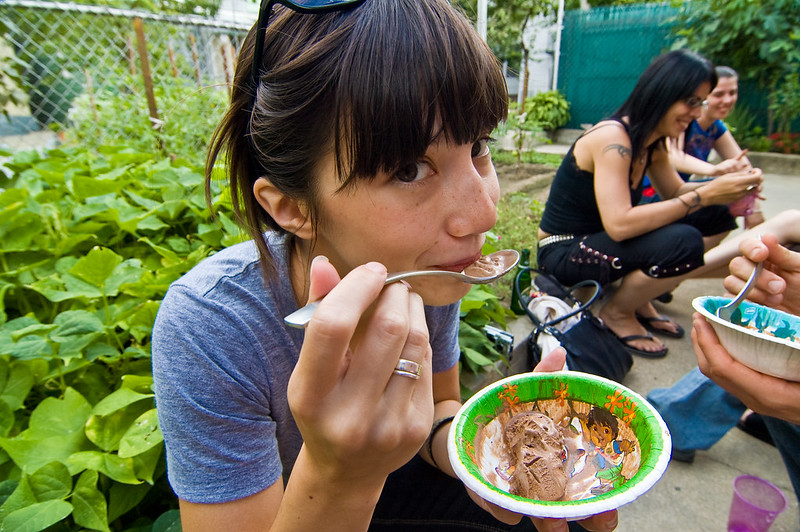 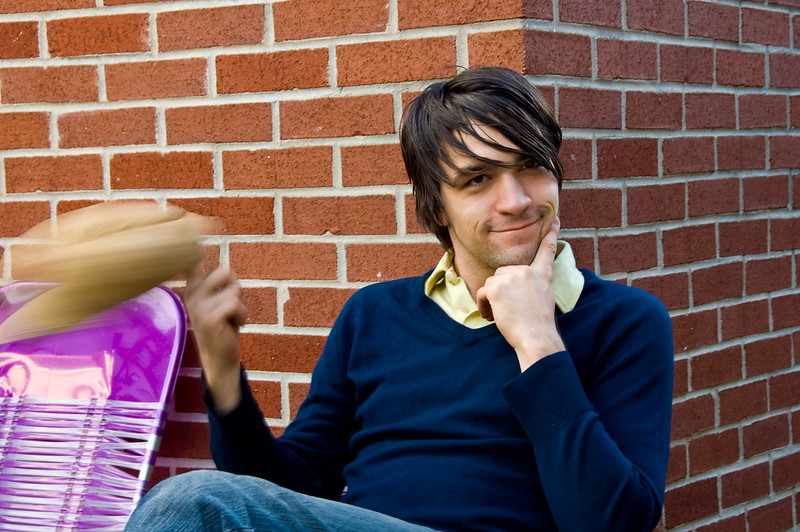 Marissa and Tom are quick becoming our resident mixologists. Today they came bearing a Pineapple Green Iced Tea and Mint Iced Tea. I felt bad for Tom, being a wheatard, pizza must be hard to sit around and watch people devour slice by slice. The Meatmaster never forgets anyone though (except the occasional vegetarian), and there was enough sausage to keep his belly full, hopefully easing the pain a bit. Marissa went straight for the super chocolate ice cream that consisted of coco powder, dark chocolate, and Kahlua...she's a bit of a chocolate freak. 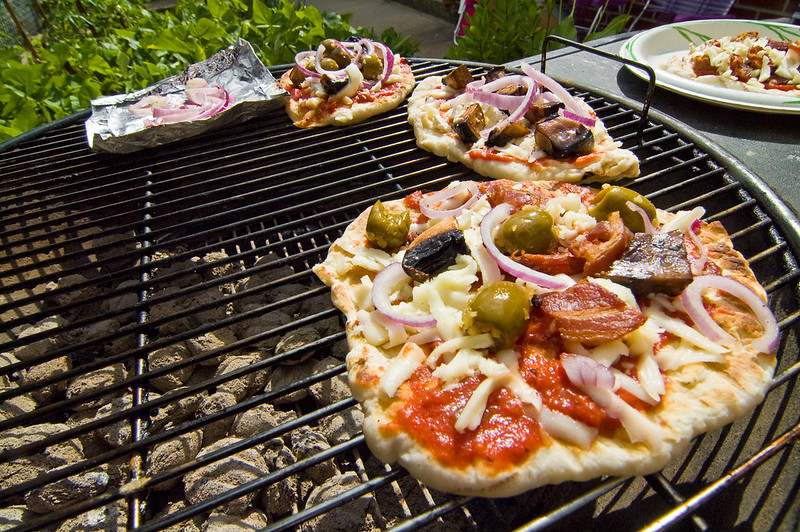 I try not to be repetitive in The Meatwaves within each season, but I might have to do pizza again. It makes me really happy to see everyone up at the grill, assembling their own beautiful meat creations. I've been trying to think of other things to grill to get people as involved and creative with their food, but I keep drawing blanks....any suggestions? Keep your thinking caps on and I expect a full report when I see you on July 15 at the Meatwaves of all Meatwaves, Carne-val!