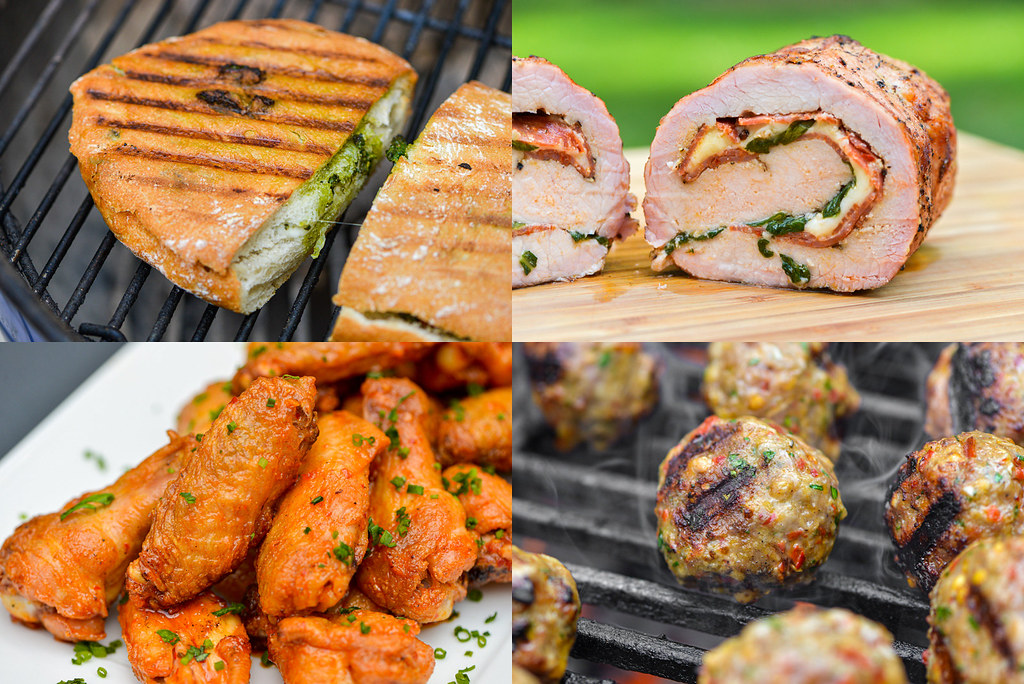 I don't normally host cookouts in the dead of summer because the heat and humidity here in North Carolina are no joke, so it's more comfortable for all to enjoy eating meat outdoors during the cooler months in spring and fall. However, as we seem to heading in a direction where The Meatwave may have to put on pause again, I have a desire to play host while it's still possible, so I decided to take advantage of a lower humidity day to have a small crowd over for the sole purposed of eating grilled goodies together. Being the height of fresh produce season, I thought it would be fitting to feature veggies more than usual, and that's what I crafted the menu around for That's a Spicy Meatwave! 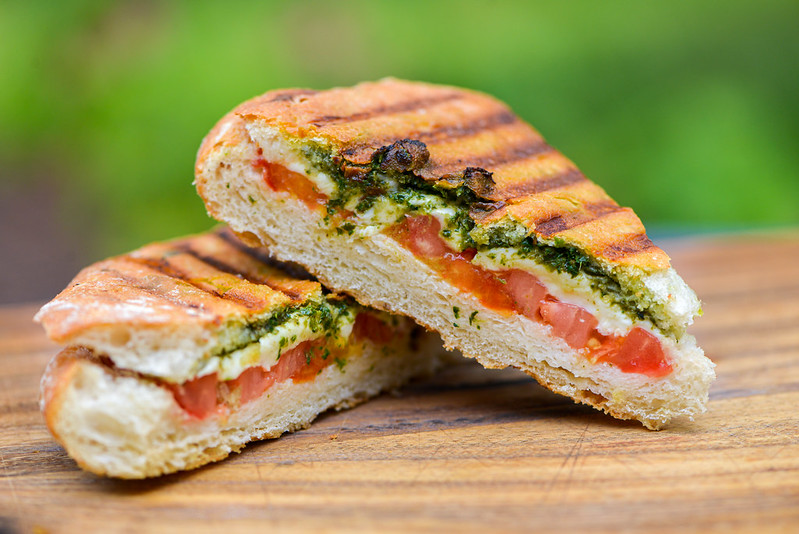 There's no summer veggie treat I like more than tomatoes. Once they're in season, I'm at the farmer's market every weekend stocking up on these satisfyingly sweet and acidic orbs. So the tomato was my first area of concentration and a simple tomato, fresh mozzarella, and pesto panini felt like a good way to center them while still utilizing the grill. Light and fresh tasting, these sandwiches started off the day of eating on the right note. 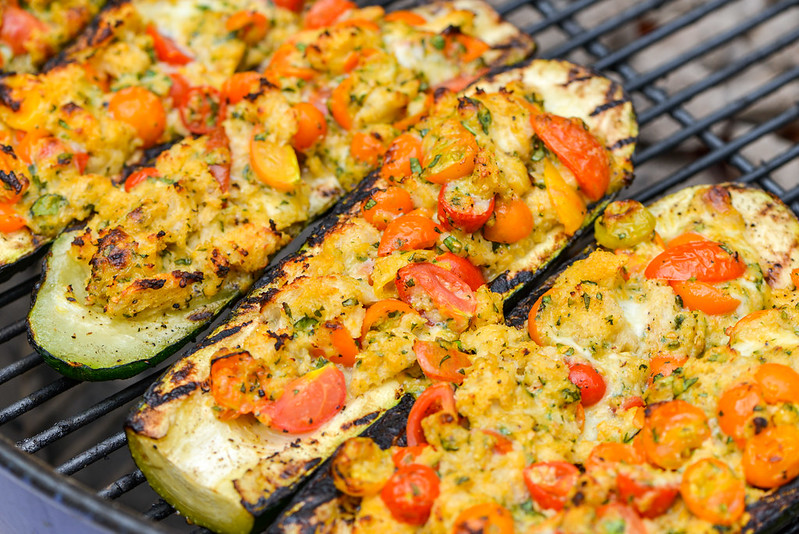 I kept the tomatoes flowing in my next dish, which also featured another summer favorite of mine—zucchini. I transformed the squash into boats by hollowing out the centers and then stuffing them with a tomato, mozzarella, and bread mixture after being seared first. They then roasted over indirect heat until the stuffing began to brown, at which point I removed them from the grilled and served. These continued the summer fresh feel and ended up being more filling than I was expecting—I devised these as a side dish, but they really ended up being more of a main. 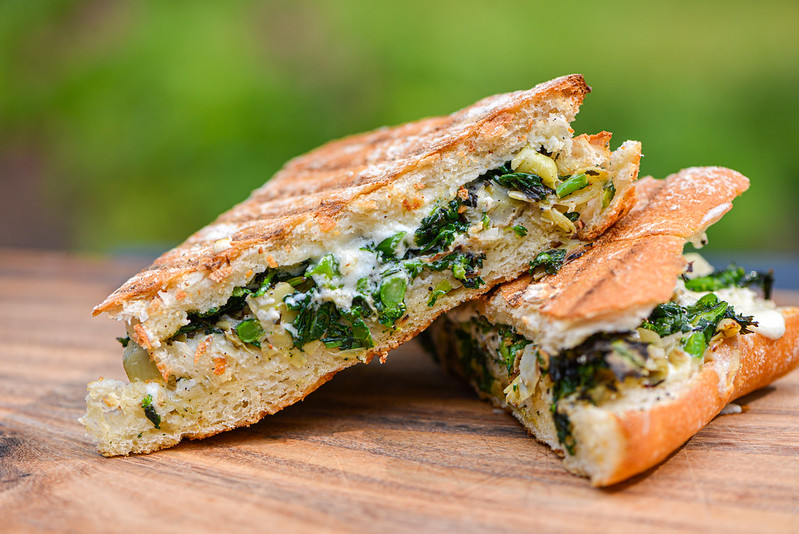 After settling on that first tomato panini, I kept with that Italian sandwich trend because it fit with the theme and provided an easy solution for how to make vegetables a main course. This next panini was my personal favorite with grilled artichokes, broccoli rabe, and a hearty helping of parmesan-spiked mascarpone. I was thinking this would kind of be like an Italian spinach and artichoke dip on a roll, and that's exactly how it came out with the creamy cheese melding with the veggies to make one really killer combo. 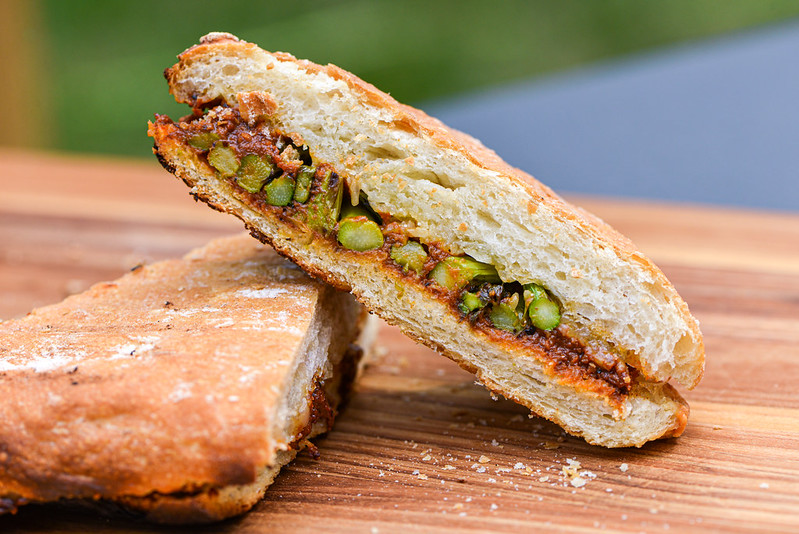 The last panini tilted a bit away from the lighter feel of the first two, but still featured summer veggies front and center. This one took a Spanish romesco sauce and paired it with grilled asparagus and Manchego cheese. The heaviness came mostly by way of the robust flavor of the romesco, but it still fit quite well with the menu overall. 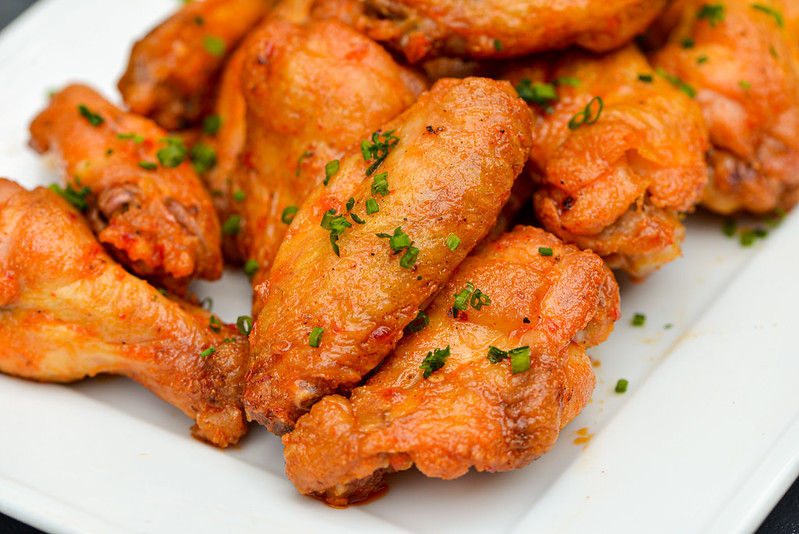 However much I cook more vegetarian dishes, I still have yet to do a fully meatless Meatwave, which seems kind of counterintuitive, although I'm not saying it couldn't happen one day. I grilled mostly appetizers for the meats starting with these Calabrian chili wings, which had the tangy and spicy flavor of standard Buffalo wings, but with a much fruitier and brighter taste thanks to the Calabrian chilies. 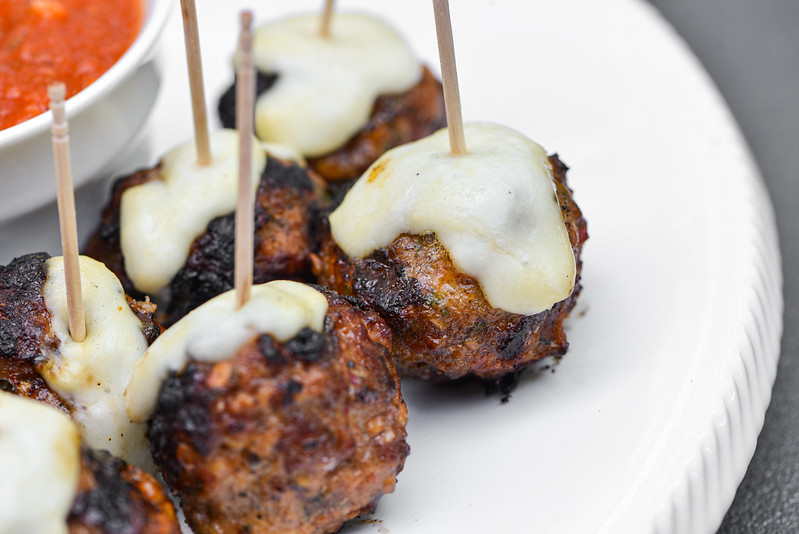 I felt like there was no way I could skip spicy meatballs given this Meatwave's title, so they made it into the mix. I pretty much used an old Italian meatball recipe as base, but added in a hearty portion of Calabrian chilies while I had them on hand. This really livened up the meatball with some extra freshness and a good hit of heat, which I tempered a bit finishing them with melted fresh mozzarella on top. 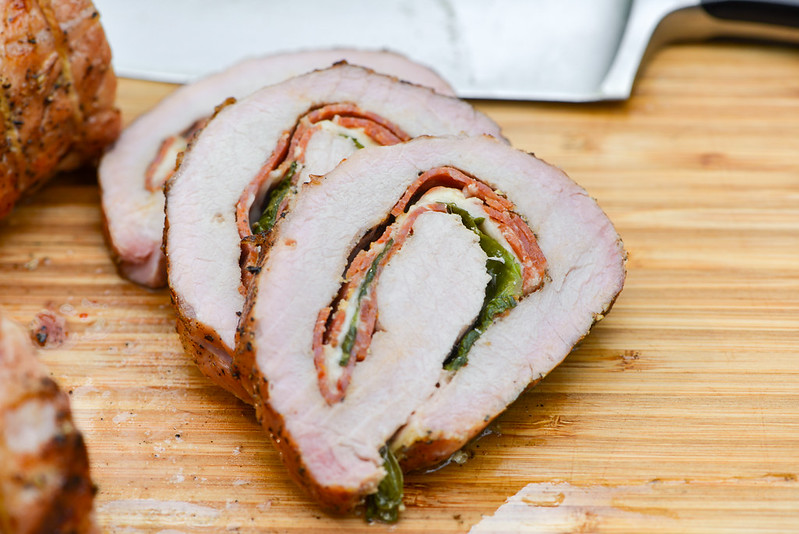 That was where the menu was supposed to end, but I've had this idea for a hot sopressata-stuffed pork loin for awhile that fit really well into the theme, so I just went for it. We had a rather small group on hand this day and I was pretty sure I'd be eating most of this on my own as leftovers during the week, but it ended up being almost gone by the end of the day, which is a testament to how well that spicy sausage worked with the provolone and basil that were also inside, providing great flavor to the light meat of the pork loin. 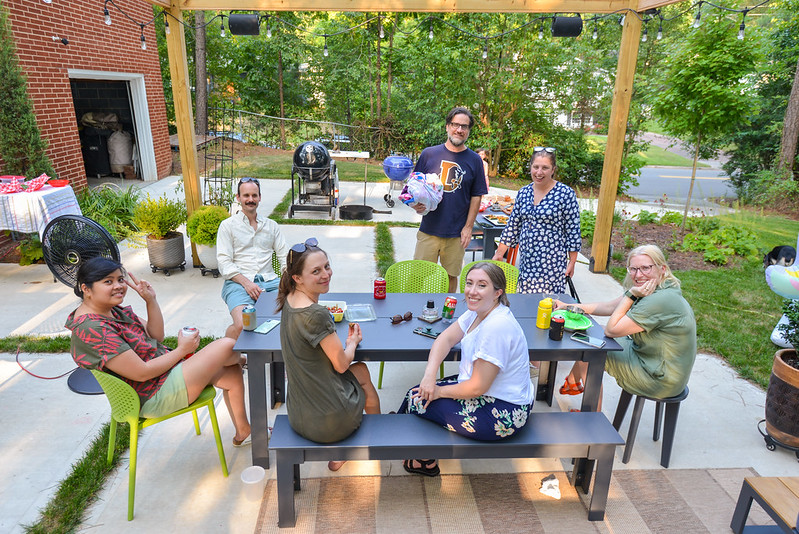 I'm still keeping these Meatwaves pretty limited for safety concerns, and this week we had a gathering of some of the most loyal attendees which included the great folks pictured here—Kristin, Evan, Meredith, Christina, Lindsay, Chris, and Leslie. We had an additional Lindsey and Steve as well, but they didn't make into this snap. 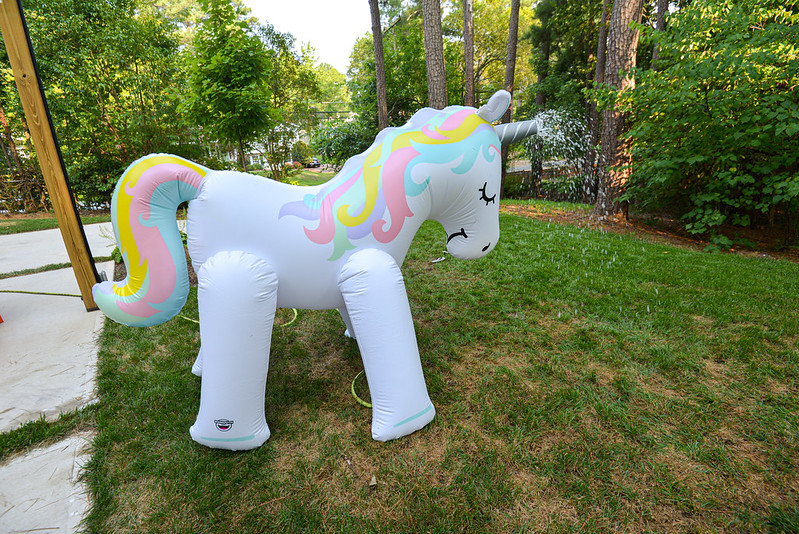 We did welcome a new magical and mist-cal friend this week that I have dubbed "Goliath." While the heat was manageable this particular day, Goliath did help with cooling off and provided endless fun for the youngsters that were there. 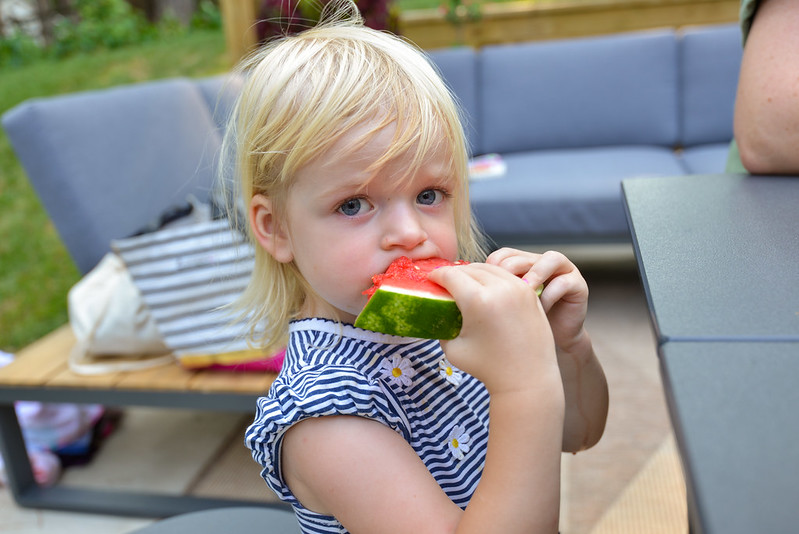 And why not see some of those youngster enjoy watermelon. First is Brooks... 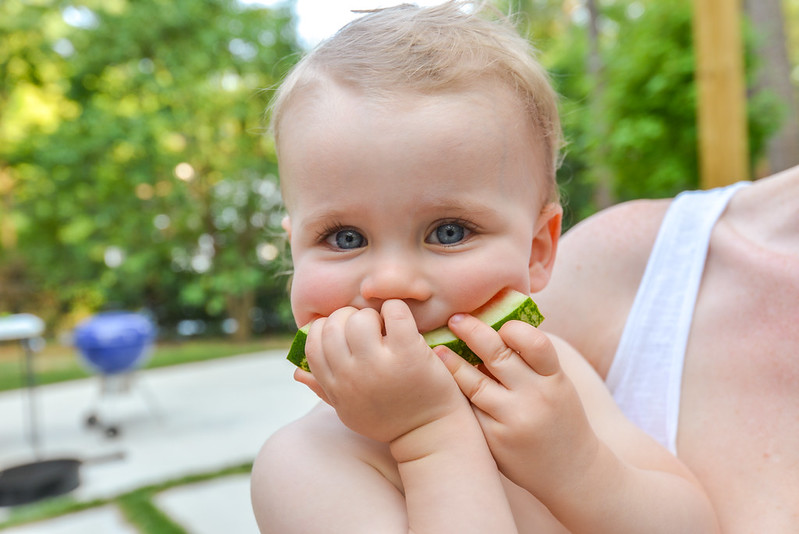 ...and then we have Kai, who loved watermelon the most—he seemed have a slice stuffed in his mouth every time I looked. So that closes out our second kind-of return to form of The Meatwave and I only hope that when the cooler weather starts to settle in, I'll be able to keep these going, but if not, at least this wasn't a summer devoid of sharing food with friends like 2020 was, which brings me some sort of solace in trying times.