The Meat Goes On 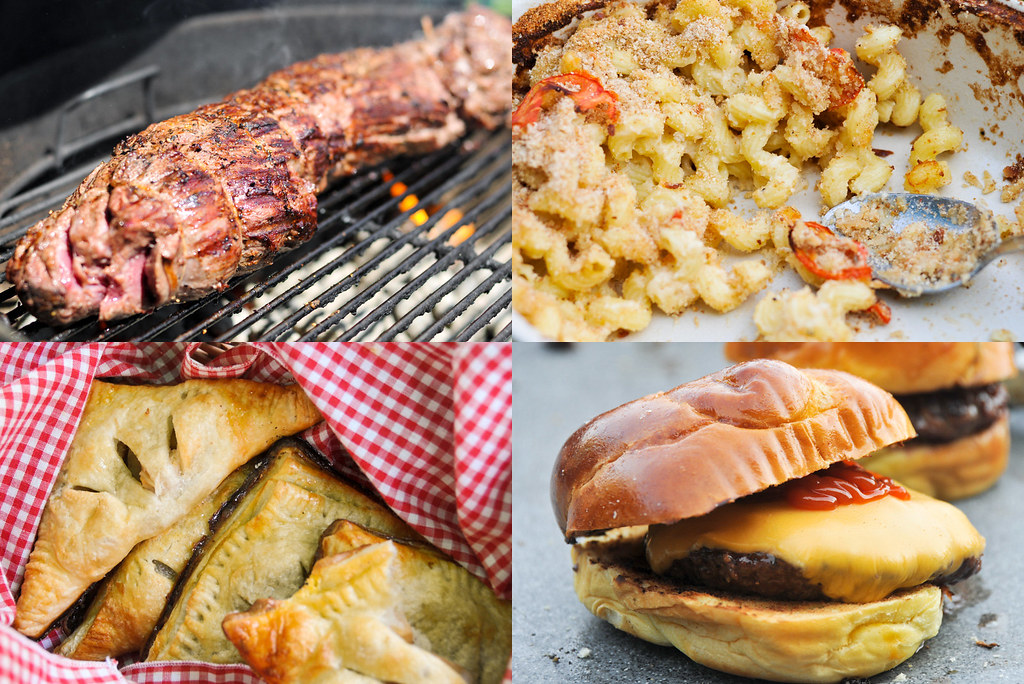 Oh man, what a way to start the Meatwave. I went out on a limb and said this would not only be the biggest Meatwave yet, but also the best, and I don't think anyone could argue that those promises were fulfilled. Nearly 25 Meatwavers crowded onto the deck to devour 6 pounds of beef tenderloin, 5 racks of ribs, 4 pounds of burgers, 2 dishes of mac and cheese, a pot of beans, fried pickles, cornbread, apple turnovers, and ice cream. No one left without feeling the raw power of the Meatwave as it nearly drowned us all, to much delight. 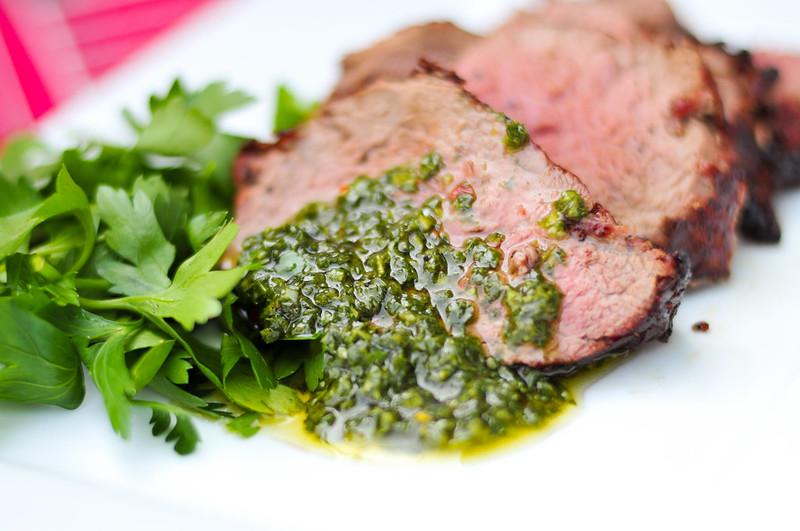 First up was a real treat for us all, a whole beef tenderloin. Generously donated by Mark Pastore at Pat LaFieda for an upcoming post on Serious Eats, this was just a joy to cook and eat. Mark said he was sending me one tasty tenderloin, which doesn't usually have all that much flavor, and boy did he deliver. Meatwavers were amazed on not only how tender it was, but also how beefy it tasted. It got only better when given a little hit of a chimicurri sauce. 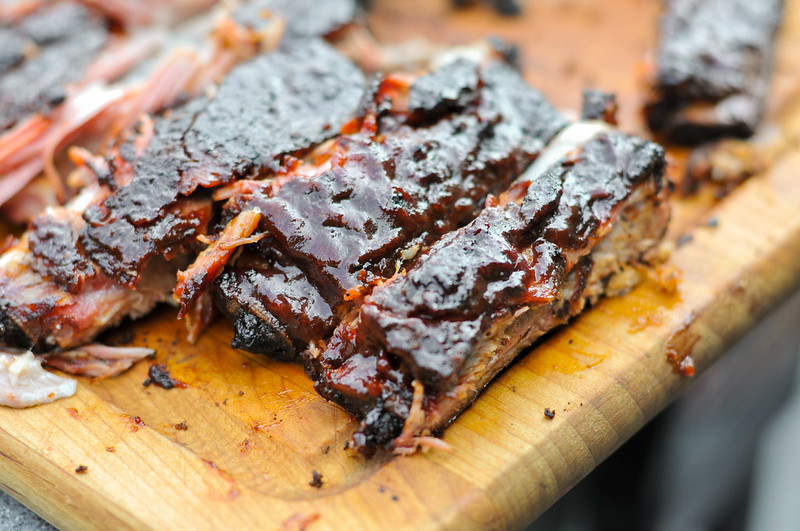 Next up were a whole mess of ribs. I made 5 racks in 3 varieties—Kansas City, Cherry, and a delicious bastardization of Memphis-style (I lightly sauced them). These went so fast I nearly forgot to take a photo of them, even though they took up the biggest portion of my day. Each rack ended up being better than the last. What you're seeing in the photo is the final rack of an ancho rubbed and cherry sauced ribs, a tad overdone, but still incredibly tasty. 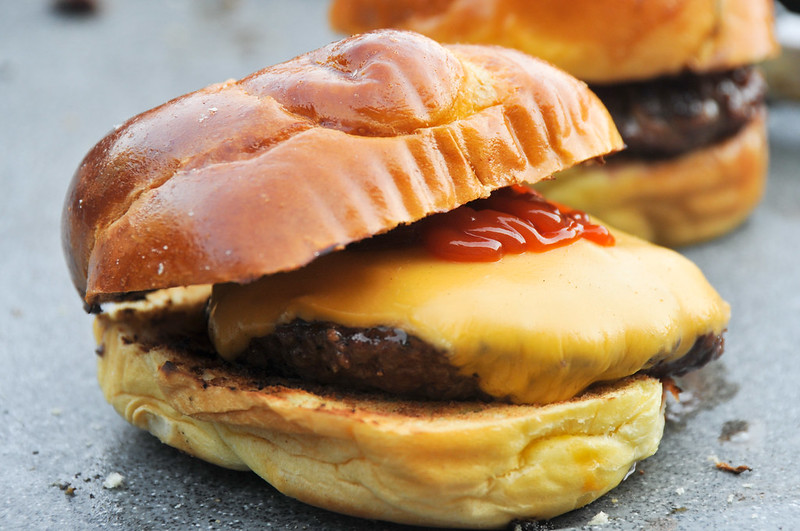 Ribs and tenderloin were all that was originally planned, but as RSVPs poured in, I knew another meat was calling. Going classic, I opted for good-old chuck burgers. I picked up the fattiest roasts at the butcher, ground them right before the crowds arrived, and we enjoy juicy, beefy burgers served on Marissa and Joe's favorite challah rolls. 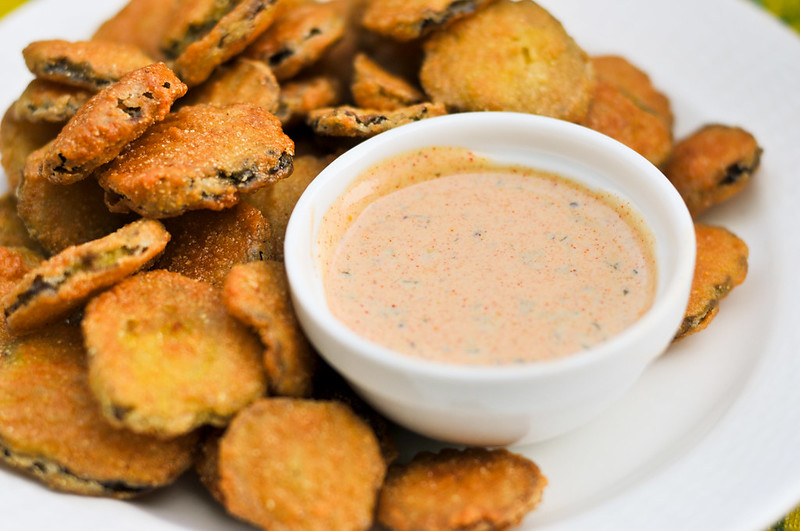 Tending to sides, we ended up with a feast within a feast this past weekend. First I made an entire 7 quart pot of beans, which I forgot to photograph. Then a favorite by just about everyone, fried dill pickles served with a remoulade for dipping. 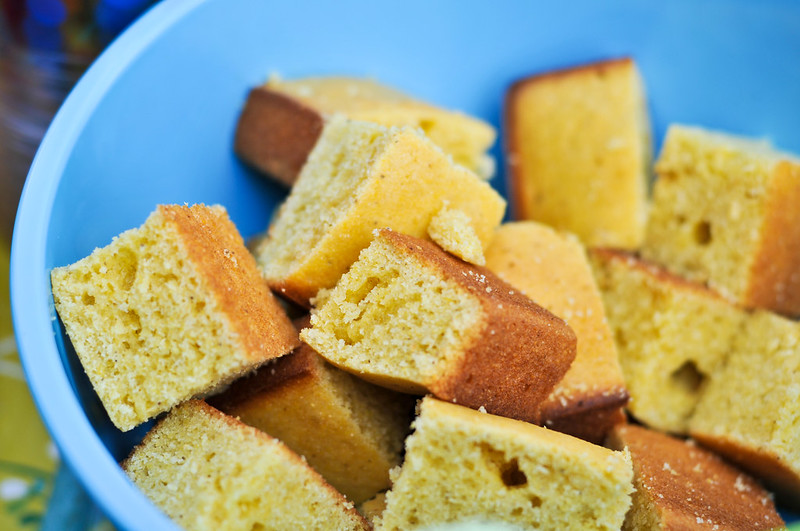 Cornbread almost didn't happen, I really wanted to make it but the oven was monopolized by the beans for over 6 hours. As 2pm approached and the beans were finally ready to be pulled, I quickly assembled the batter for the cornbread and got it in just before the first ring of the door bell, good thing too, a barbecue feast without cornbread would have been sad. 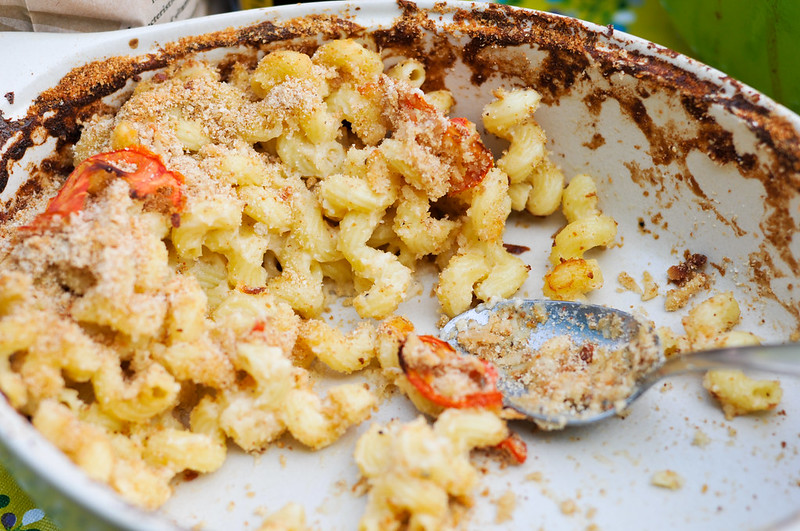 There was also a world class mac-and-cheese smackdown. In one corner was Nick and Sarah's cavatappi mac-and-cheese, topped with bread crumbs and tomatoes. This was the first to arrive and first to go. 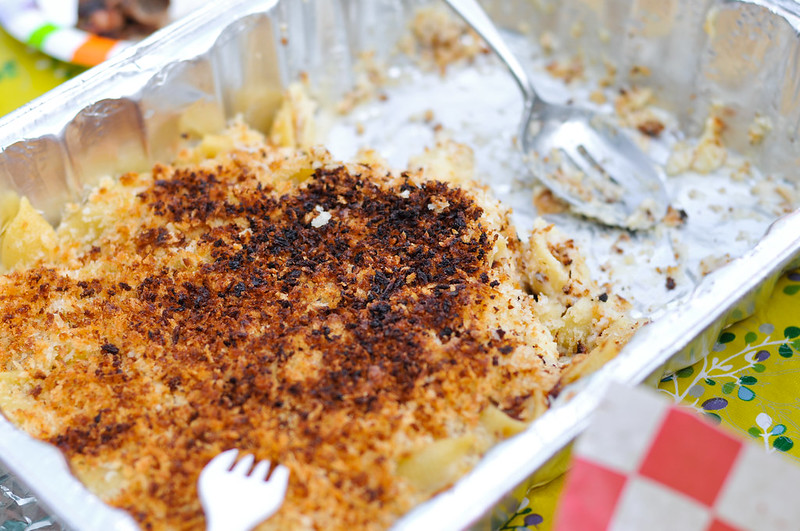 Not to be outdone, In the other corner was Hayley and Paul's shells, packing the secret ingredient of crispy pork belly. You know this stuff is good when a vegetarian, just finding out that there's meat in the mac-and-cheese, still goes back for seconds. 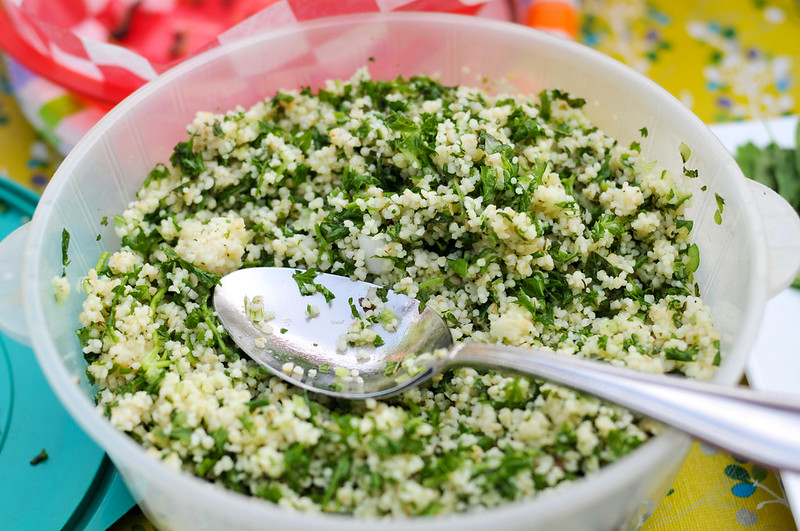 A welcomed lighter note to a heavy meal on a hot day was Tabouli De MFS. I always appreciate the healthier sides, as I somehow can convince myself I'm not as much of a fatty when I put a spoonful of this next to mac-and-cheese, ribs, beans, and tenderloin. 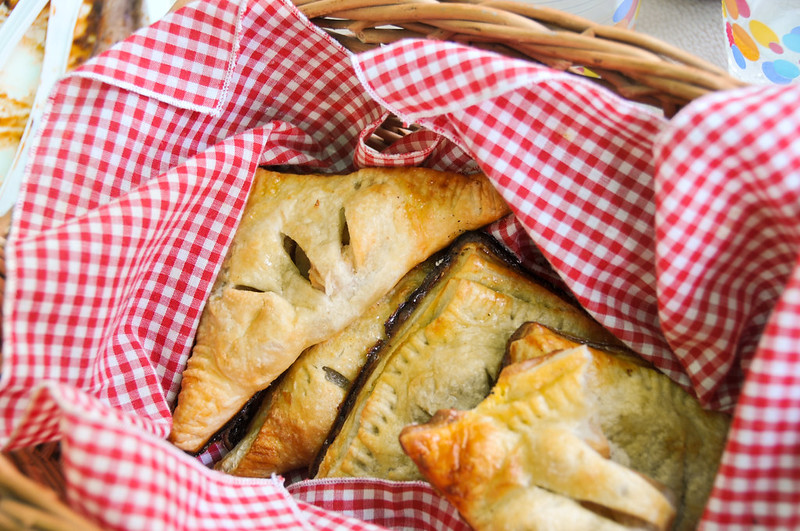 Lindsay wowed with her ever expanding baking skills with these individual apple pies. 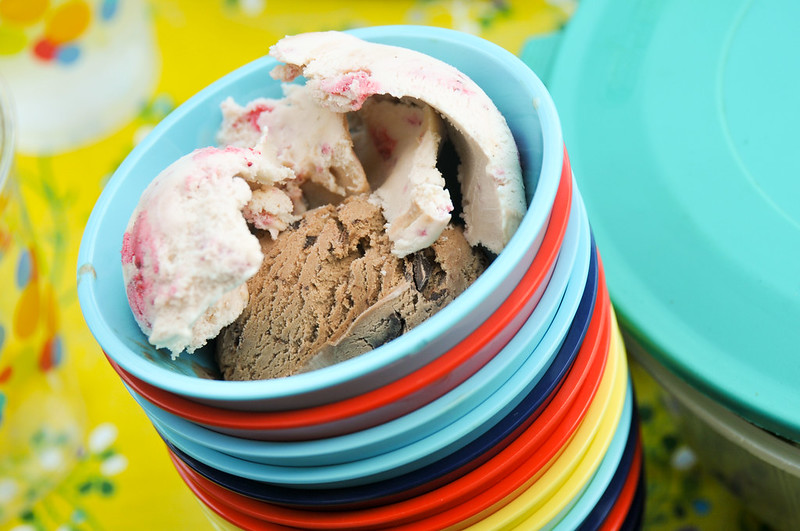 The pies made me wish I had done vanilla ice cream, but I had already made a mint chocolate chip and strawberry, which was a great way too cool off at the end of a long Meatwave. 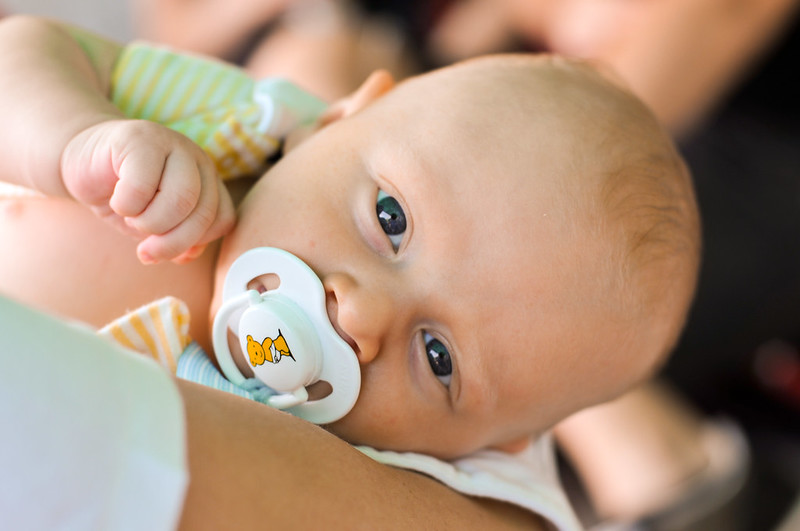 Only 3 months old and already a true Meatwaver, baby Marley was the youngest we've ever had. Unfortunately, seeing all this meat and unable to eat it yet brought him to tears, but that sadness will certainly be reversed when those little chompers start to come in. 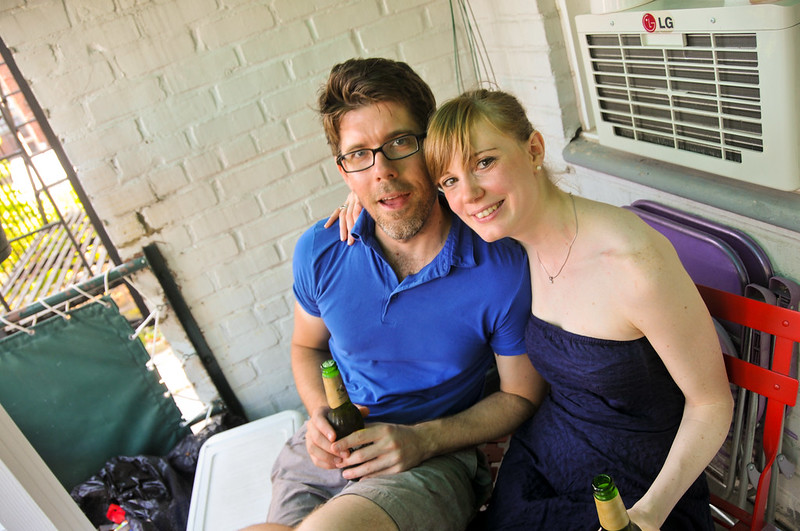 With almost 25 people at this Meatwave, I'm not going to get through them all, so the selection of faces come on the basis of photo quality. Here's Erin and Matt, always a good peeps to have in attendance. 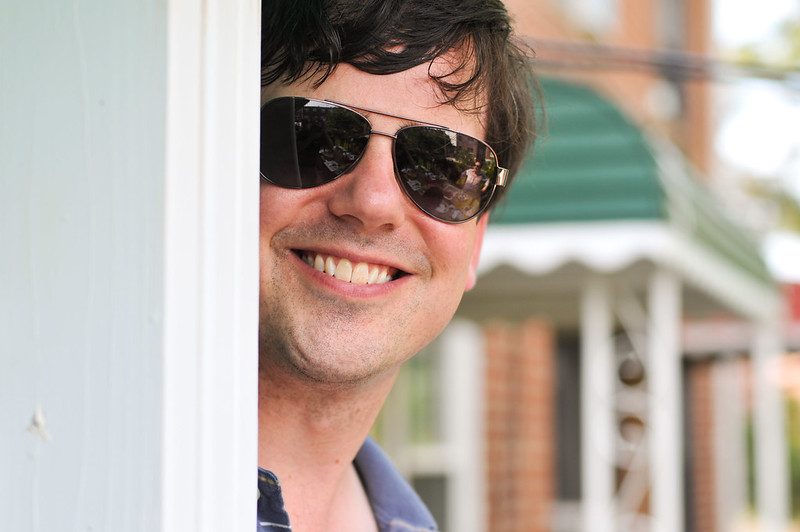 That's Kevin peering from behind my newly painted ghetto column holding up the awning. Kevin apologized that his woman couldn't make it, and while we'd love to have had her, he brought along two friends—avid meat eaters and new faces—so he scores high points there. 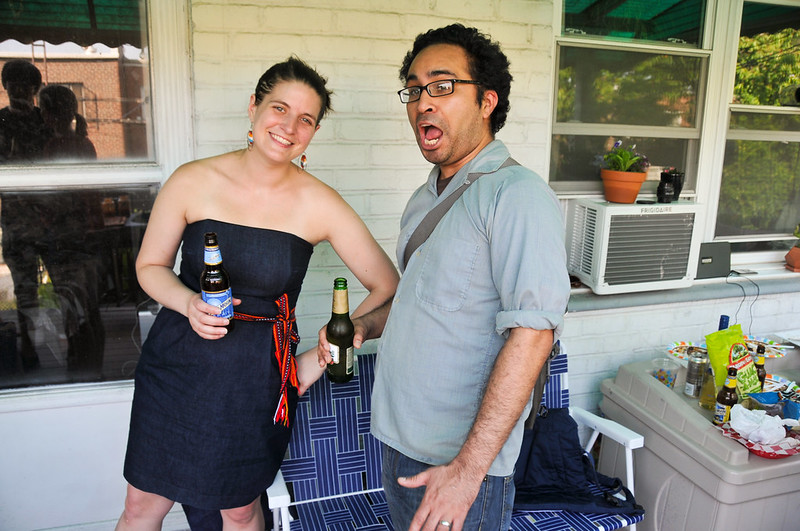 Finally, Lindsay and Brandon, who are celebrating the start of their last Meatwave season in NY. Heading to the Windy City at the end of the summer, we're already prepping to take the Meatwave on the road there. Chicago beware, the Meatwave is coming for you!