The Meats of Production 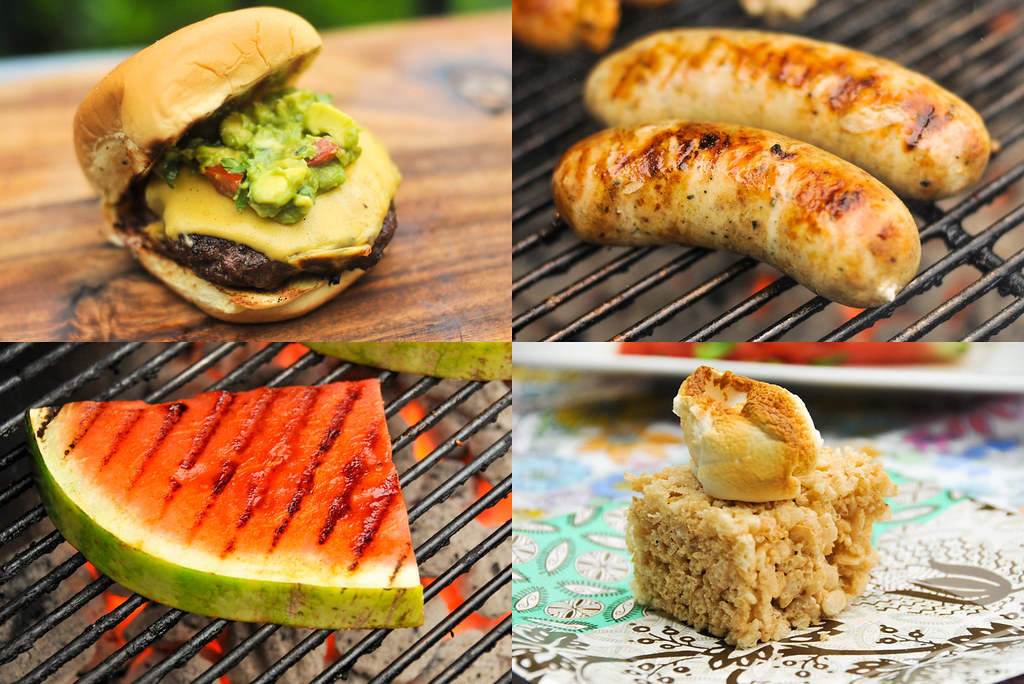 It's been my MO to sit out the Labor Day grilling tradition and instead find a friend's barbecue and relish in the simplicity of burgers and hot dogs that are seldom seen in my ambitious Meatwave endeavors. Something this year made me change my mind when devising my schedule, I'm not quite sure why, but I had a feeling I should take on the holiday grilling duties that I've been happy to relinquish almost every other year. It would take a while, but I finally found out why this was so important—Labor Day marked the return of Meatwavers extraordinaire Lindsay and Brandon.

A mainstay in years past, Lindsay and Brandon left us for a more sausage-centric lifestyle in Chicago at the end of last summer, but a break from work allowed for a short trip to their old haunt of Astoria and partake in something they've been dearly missing this summer, the Meatwave! 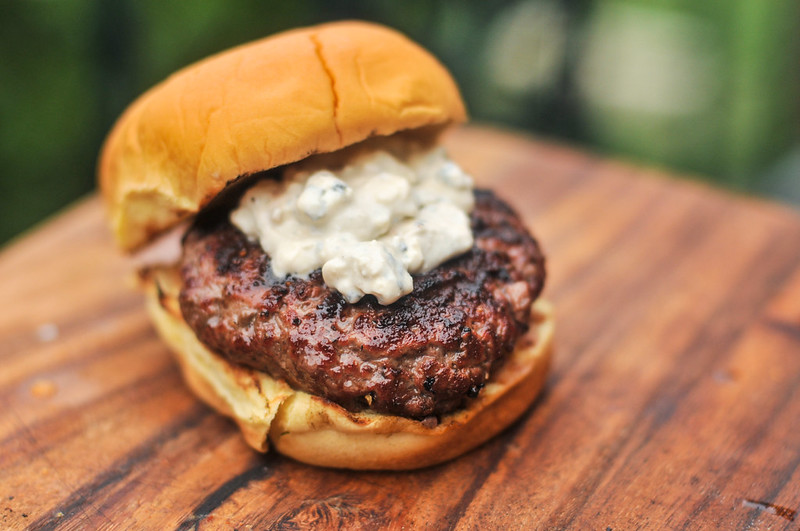 Although my decision to man the grill and play host was no doubt the correct one, after all the insane grilled goodies I've worked on and the tons of barbecue smoked over the summer, I did want the uncomplicated menu or standard backyard fare. First and foremost, this meant burgers! I picked up eight pounds of fatty chuck and ground it the morning of the Meatwave. Then, throughout the day we went through the entire lot of 24 patties, topping them with things like red onion jam, avocado relish, and chunky blue cheese sauce. 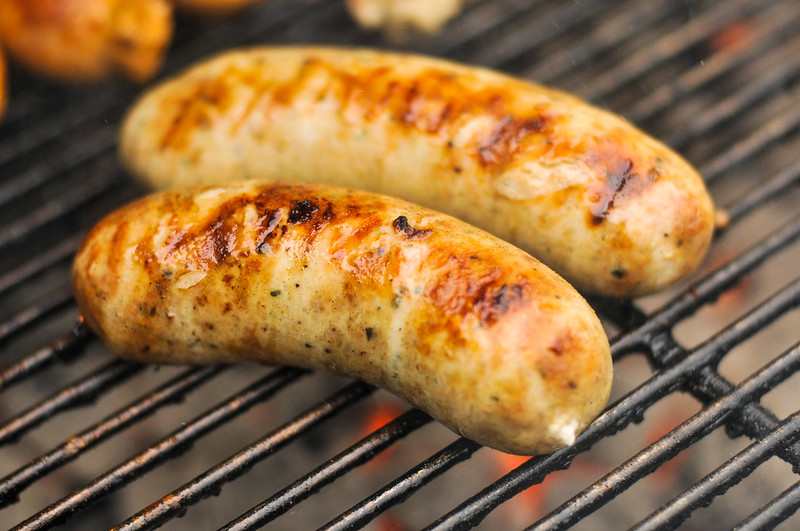 Next to burgers, you also need hot dogs and/or sausages. I chose both, but since the sausages were homemade, they get a special shout out. I first decided on doing a chicken sausage with roasted garlic, which had feta, oregano, and red wine vinegar as the main flavorings. These juicy links were delicious, if not understated next to their brethren... 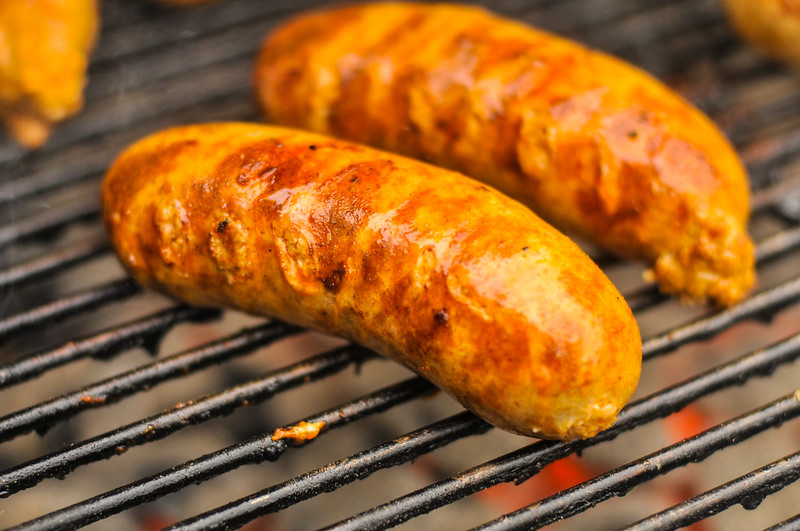 Buffalo chicken sausages! I had made these once before to very tepid results, so I thought it was time to try them again. I fared much better this time around, switching my normal wing sauce with Frank's Red Hot Buffalo sauce in order to get butter flavor without really using butter (which I account for the off texture and exploding links of my first attempt). I think I have a fairly solid recipe now for these sausages, which were nice and spicy, having the ubiquitous buffalo sauce flavor throughout. 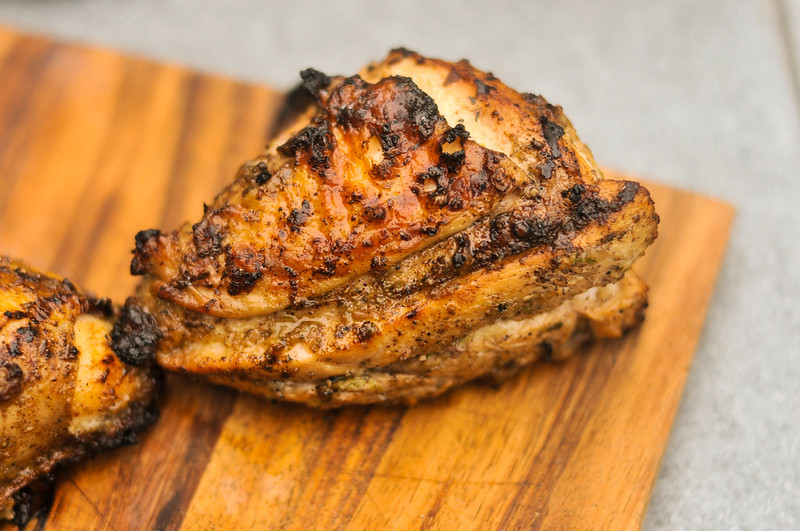 The final meat of the day, jerk chicken, was brought to us courtesy of new Meatwaver Nathan. While putting together the menu, I felt there was an omission of chicken that I wanted to fill, but didn't act upon it, knowing I would be going overboard. So I was so happy when Nathan busted out this chicken, marinated in a fantastic jerk sauce none-the-less. It really rounded out the day, hitting every point of the backyard barbecue I was going for. 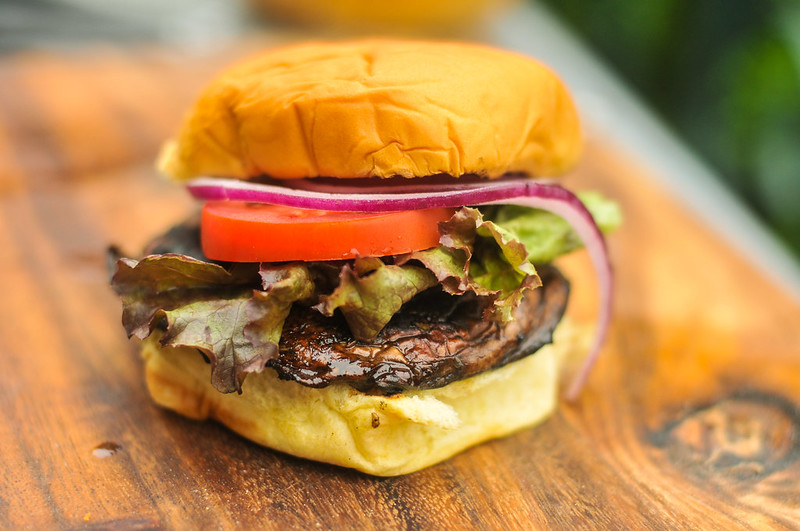 While I was happy with my meats for the day, I did throw a bone to the vegetarians this time with an alternative to beef burgers—marinated portobellos. Soaked in a balsamic-based marinade, these portobellos had an immense tangy and salty flavor, and when piled onto a bun with all the fixings, I could get an appreciation of why some refer to these giant shrooms as "meaty." 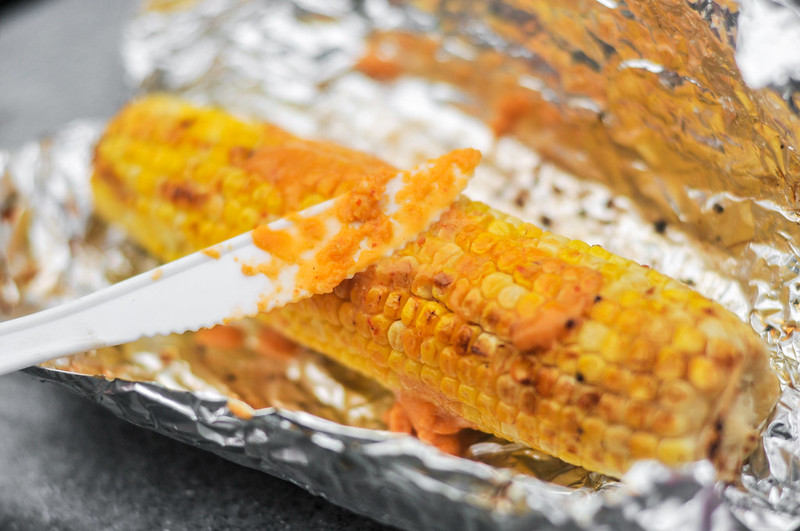 What's a good barbecue without sides? Nothing! Keeping things traditional, I went with the seasonally cheap corn. A mainstay for a good reason, corn is made for the grill, and these ears only got better when slathered with the spicy miso butter I devised. 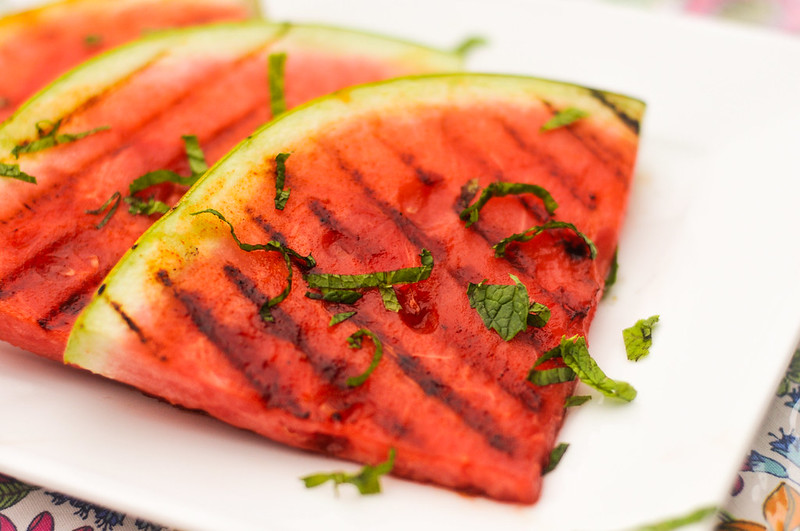 I also thought it apt to throw a watermelon into the mix. Most ate this plain, but I also did about a quarter of the melon in a spicy, grilled style. While opinions were mixed, it was super fun watching everyone try to formulate an opinion on whether or not they liked this odd melon creation. 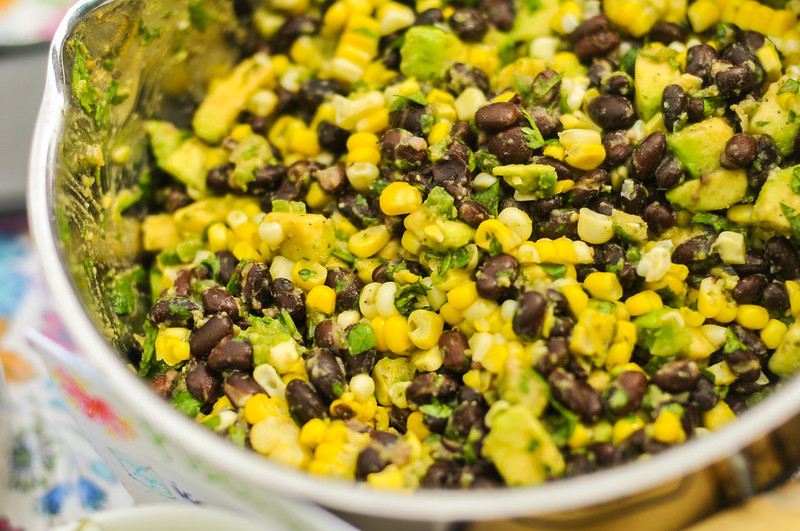 Keeping the side dishes going, Nathan and family brought this excellent corn and black bean salad, which was totally gone at the end of the day. 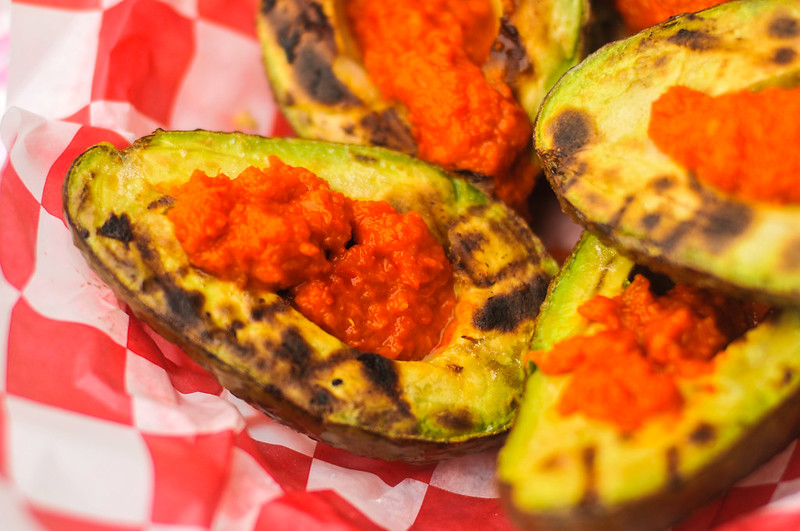 Suzun came with some avocados in tow to try to recreate a dish she likes of grilled avocados with a red pepper spread. 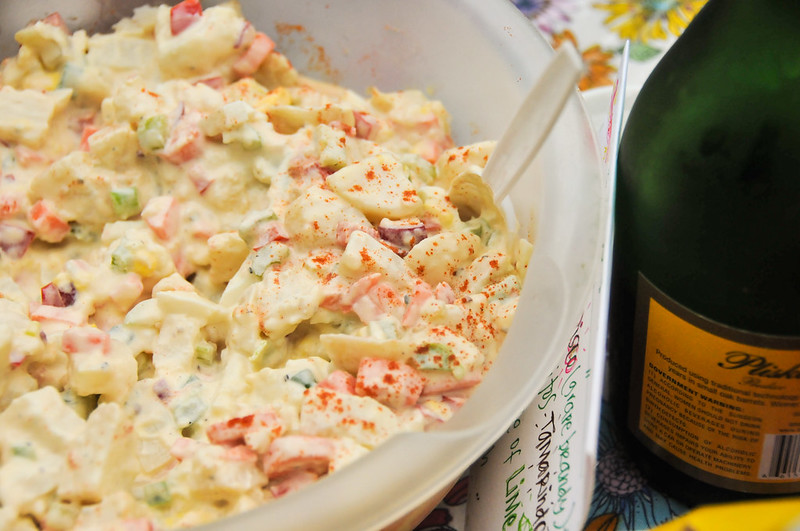 Finally, Nick made a giant bowl of potato salad, which was one more high point of this Labor Day cookout. 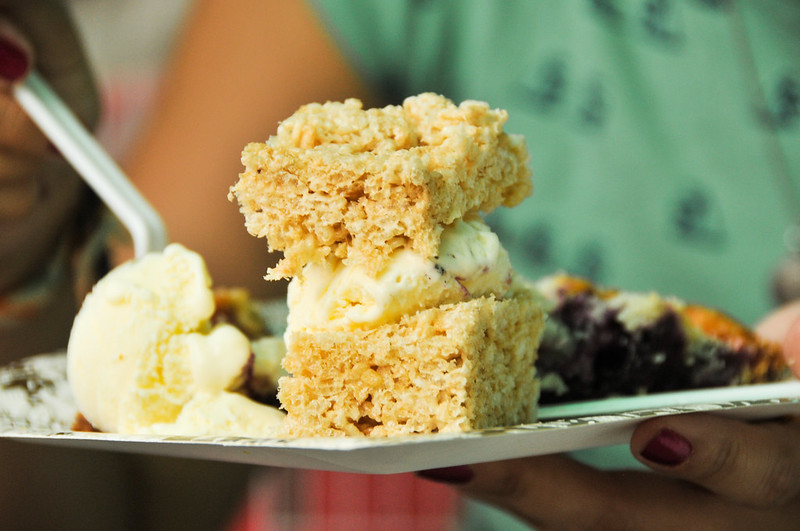 Then came dessert. I've been slacking on my ice cream making this summer, so made up for that with two offerings this time—one batch of cookies and cream and one of marshmallow. The marshmallow, with its extra creamy texture, was the hit of the day. Lindsay helped me out by making some Rice Krispy treats to go with the marshmallow ice cream, and those quickly became the "cookies" in marshmallow ice cream sandwiches. 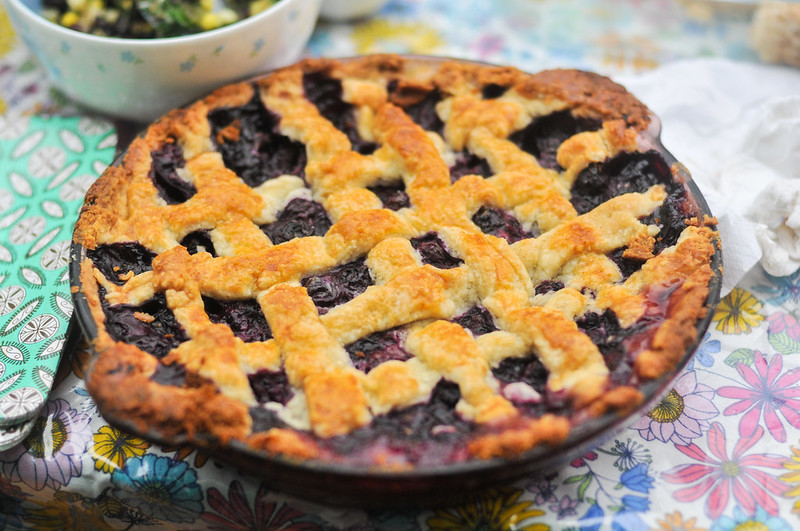 Karla and Craig fretted their blueberry pie might be subpar, but quite the contrary, it was off the hook. The crust was incredibly flaky and buttery, and the sweet blueberry filling was the perfect balance between gooey and structured with the texture of some whole blueberries remaining. 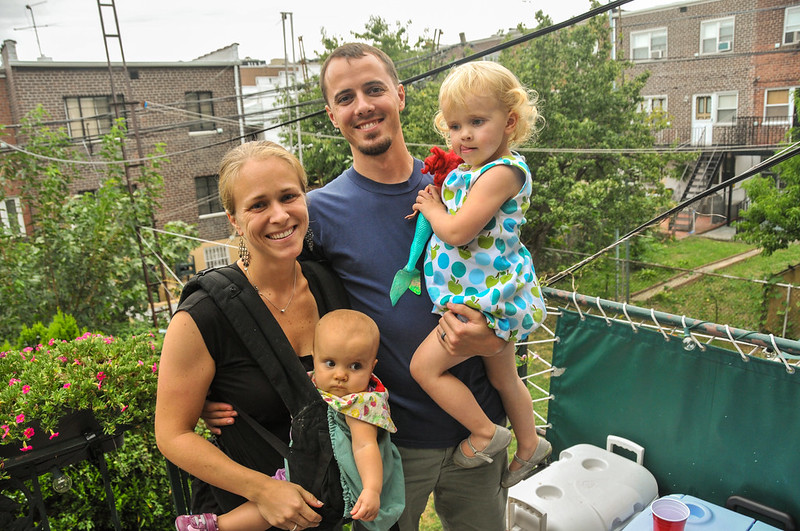 It's always a good day when we have new faces at the Meatwave, and we were so happy to welcome Nathan, Lindsey, Reese, and Colby to our expanding family. I had the pleasure to attend a barbecue at their place last summer, it was nice to return the favor and we hope to see them back again soon. 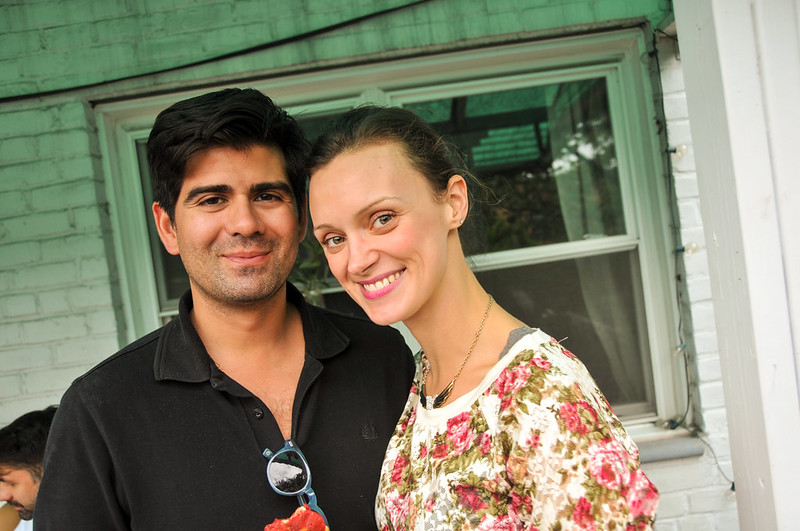 This Meatwave also marked the return of Suzun, who brought along another new face, Aldo. I believe it was the draw of the cookies and cream ice cream that finally got Suzun out this summer, although I'd prefer to credit some sort of meat. 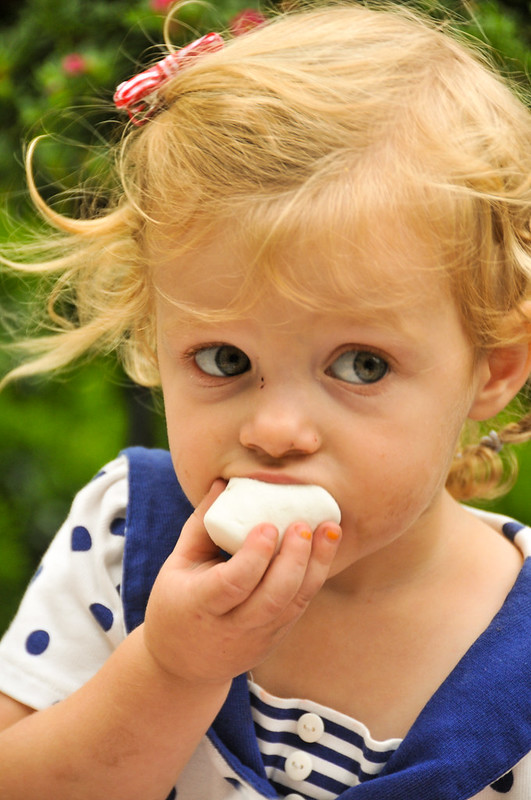 Mia made her second appearance this summer. The first time around she so totally sugar OD'd on pinata cookies, this time it was marshmallows. It's so much more fun to watch the rush when it's not your own kid, hehe. 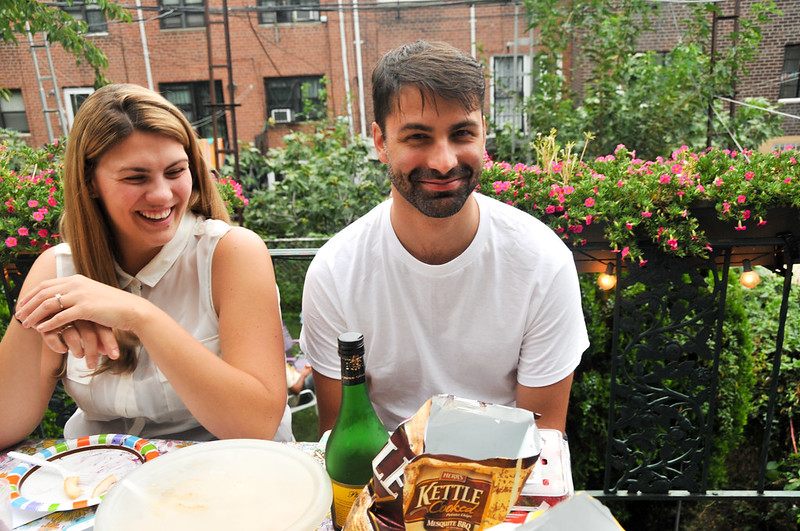 We also welcomed back Tom and Meredith, who were busy getting engaged between Meatwaves. Congrats guys! 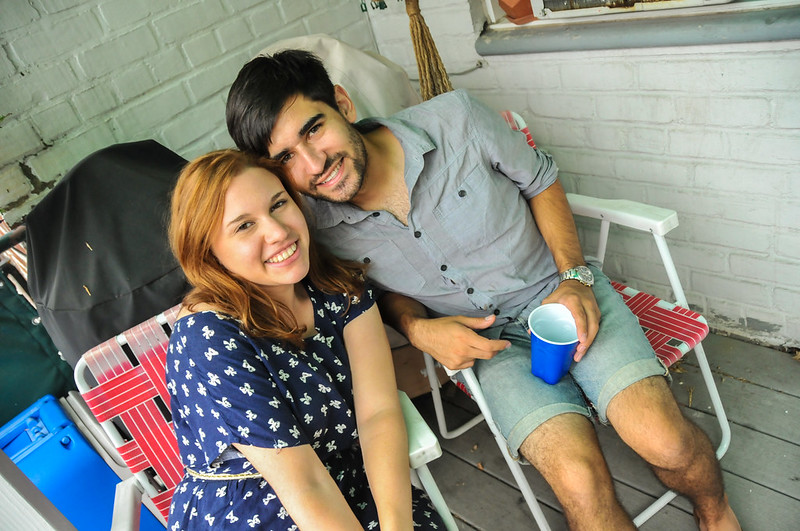 Rachel and Chuck have been model Meatwavers this summer, always contributing and showing almost every week. They're headed for the coveted best attendance award...so keep it up. 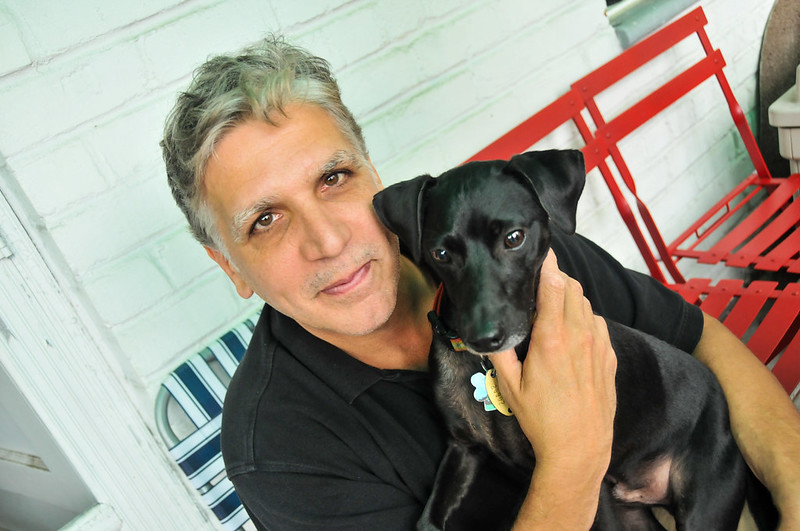 Next we have BBFs 4 EVA, Nick and Rex. Little Rex had a playmate in Reggie this week, and reason to show off his mighty bark as he took on my landlords two golden retrievers in a shouting match that lastest much of the afternoon. 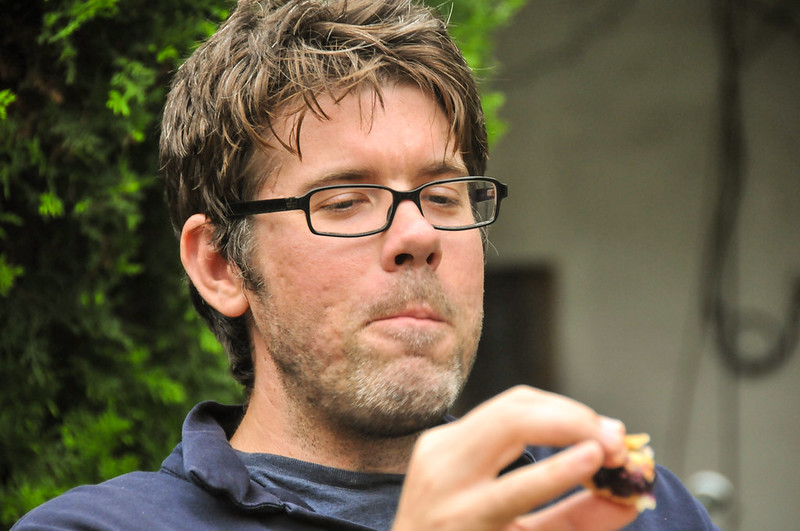 Matt hates the pie. He thinks it's terrible and no one should eat it. 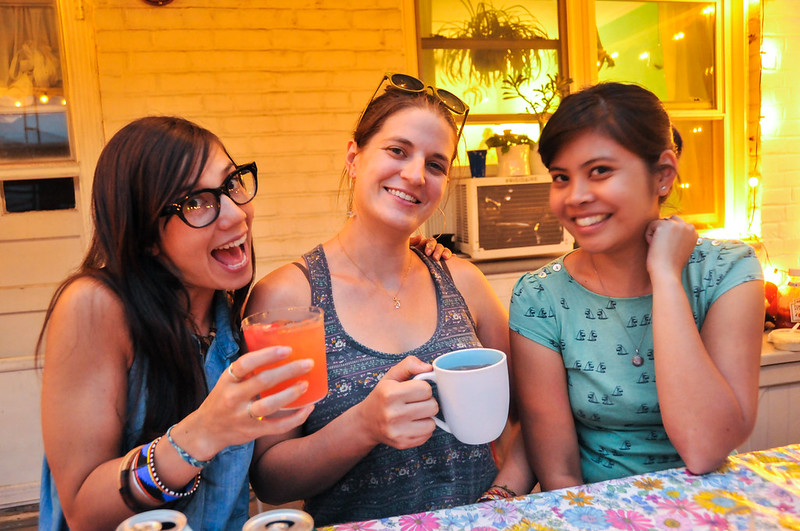 Roomie reunion! The return of Lindsay meant the old team of 35th St were back together again, and nothing could have made Kristin and Marissa happier. 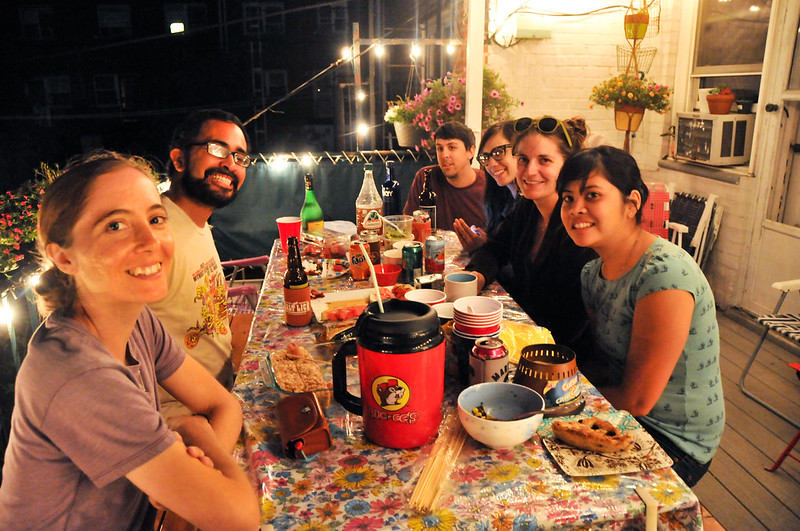 The fun never ends with Lindsay and Brandon around, which is why they're so sorely missed at the Meatwave. We chatted and drank into the night, making the most of our short time together with our great friends. In those fleeting hours, it felt as if they had never left, and beyond the meats and sweets, that's what made this Meatwave so special.