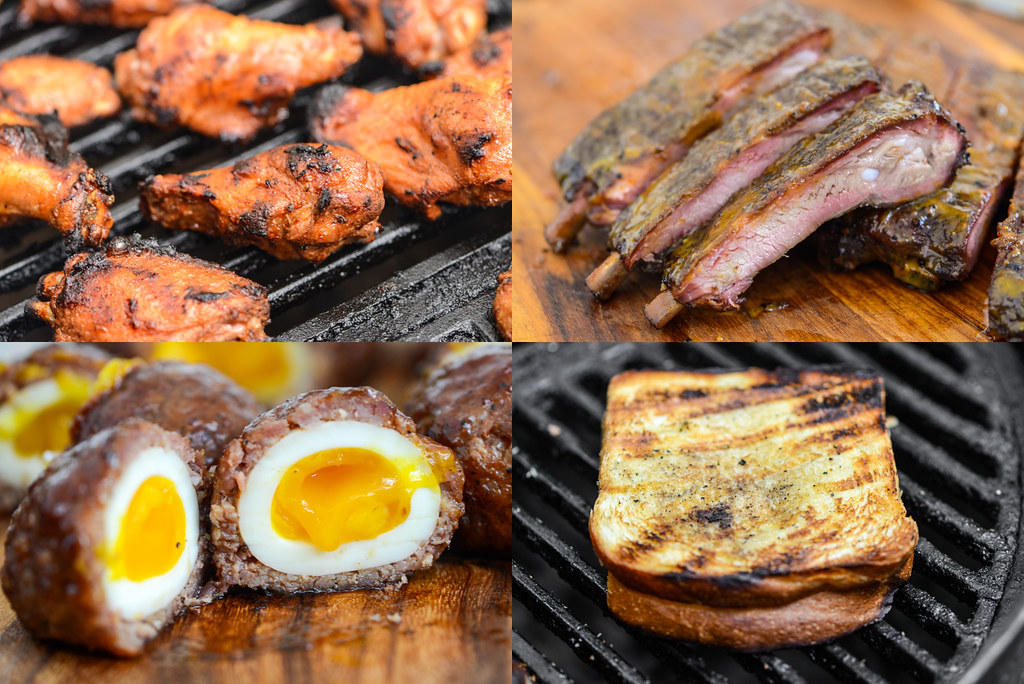 After an excellent launch of the Meatwave in North Carolina two weeks ago, I was itching to get another cookout in before the temperature takes a nose dive, so I scheduled the next one without delay for the day after Halloween and aptly named it Trick of Meat (thanks to Bryan and Jenny for that suggestion). Beyond how great the spread turned out, this was a truly notable Meatwave for a couple other reasons—it was the first one ever held past October and the only really successful one to take place in the rain now that I'm afforded the space to actually use my two large canopies. 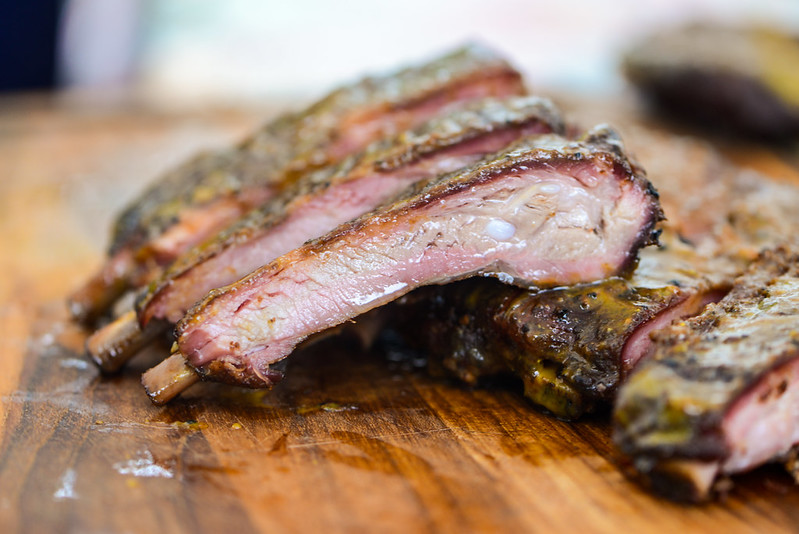 My biggest regret from the first Meatwave in my new home was making a menu that required me to be at the grill the entire afternoon, not allowing my the time to really meet all the new Meatwavers partaking in the festivities. So I carefully made a menu this time that would give me a good balance between grilling and chilling, and it started with four racks of beautifully glistening spare ribs.

Nothing fancy here, just ribs rubbed down and cooked to perfect doneness. Prior to serving them, I brushed each rack with a South Carolina mustard sauce—a recipe I've improved since first posting four years ago. 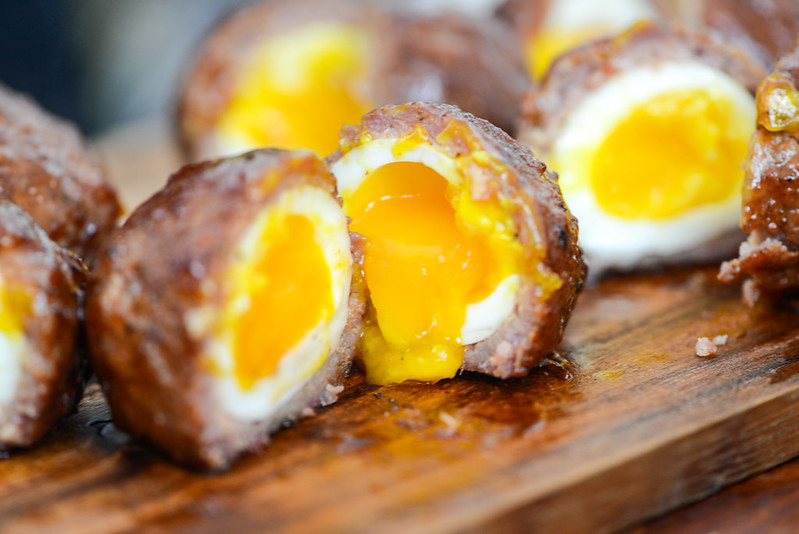 While I had the smoker going, I checked off another box on my perpetual to-do list—barbecue scotch eggs. After struggling to peel a dozen eggs I had soft boiled, I wrapped those I didn't mangle with a layer of sausage and rubbed them down with the same rub I used on the ribs. I then slow smoked them until the sausage was cooked through and finished them with a brushing of barbecue sauce. I'm not a huge boiled egg fan, which is one reason it took to me so long to make these, but I was an instant convert with one taste of these. The sausage, with all its barbecue finishings, dominated in the flavor department, while the egg provided an pleasing contrasts of textures from its springy white to creamy yolk. 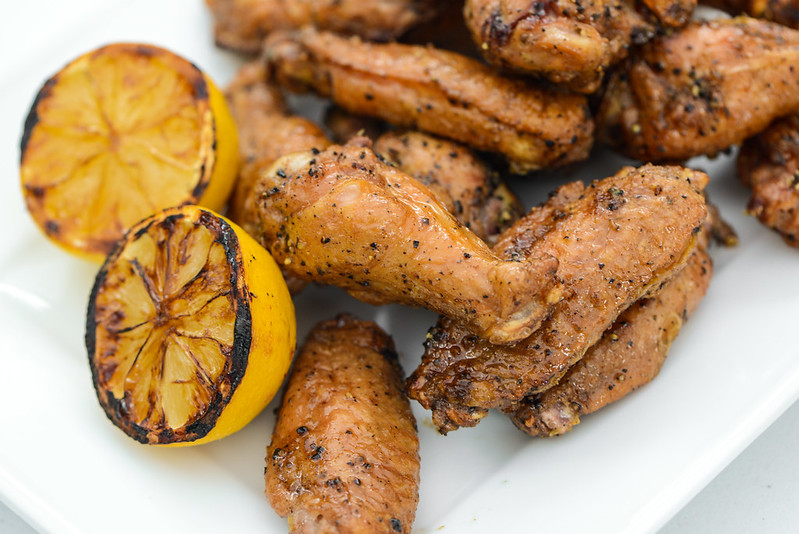 In preparation for my onslaught of wings recipes I release every year prior to the Super Bowl, I made two new wing recipes. The first was lemon pepper wings that were seasoned minimally before grilling, then finished with a thick and potent sauce of primarily lemon zest and coarsely ground black pepper along with a little lemon juice and olive oil. 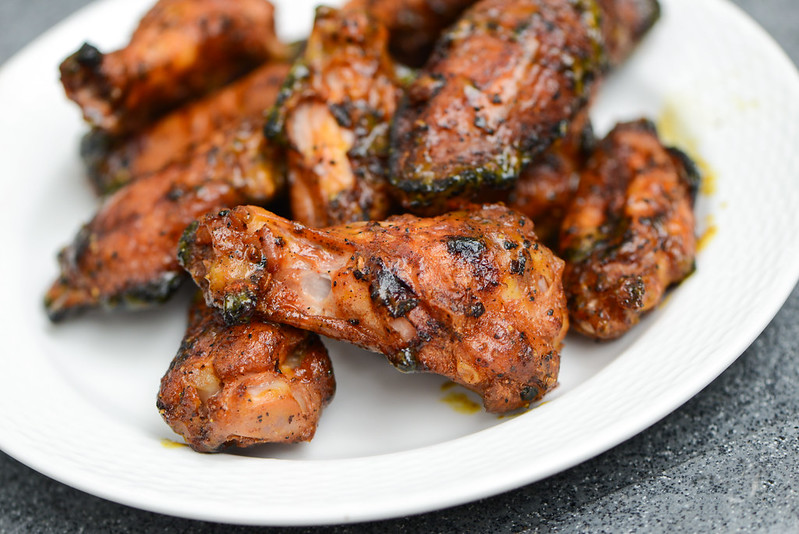 For the second recipe, I made good use of the ingredients I already had for the ribs. I coated the wings with the same rub before they were grilled. Once they got nice and crispy after about 45 minutes over indirect heat, I tossed them in the South Carolina barbecue sauce. For my personal tastes, this was a better use of the mustard sauce—the tang and bite to the mustard felt more apt on wings than ribs. 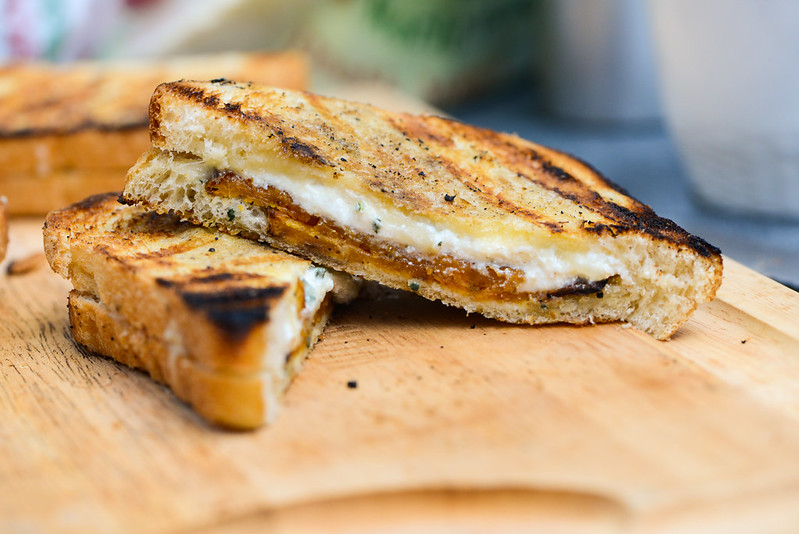 An interesting development in North Carolina is that I have way more vegetarian friends. I never used to give much thought to non-meat recipes since I would have only one or two vegetarians at most attending back in New York. Since that equation has shifted significantly, you can expect to see a lot more vegetarian-friendly recipes on the blog, like these butternut squash grilled cheese sandwiches.

To make them, I cut a couple butternut squashes into thin discs and grilled them until tender and lightly charred. I then piled a couple slices of squash on fresh sandwich bread and topped with three cheeses—ricotta, fontina, and pecorino—a sprinkling of sage and drizzle of honey. They were then grilled until crusty and the fontina was melted. The sandwiches were an incredible bite of fall flavor and a worthy alternative to the meaty selections. 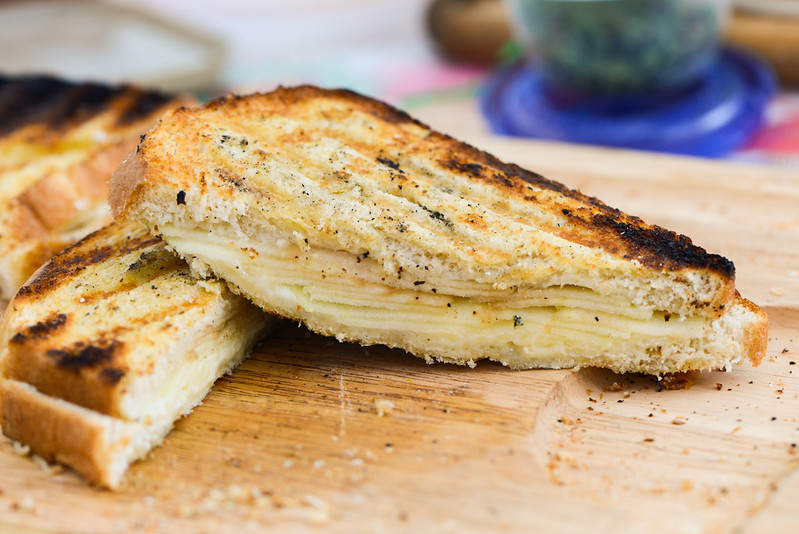 The second grilled cheese was made of crisp and tart granny smith apples sliced paper thin, paired with extra sharp white cheddar. They were not as complex as the butternut squash sandwiches, but still pretty damn delicious. 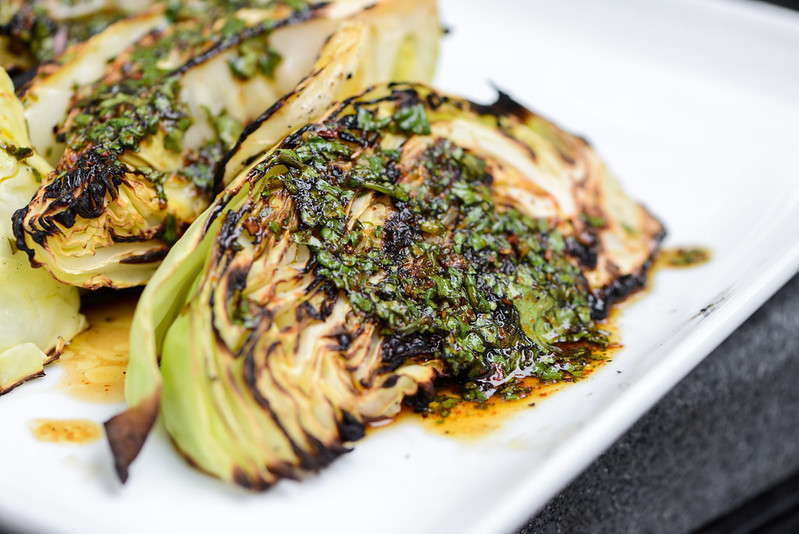 Finally, I made a couple heads of grilled cabbage. After first trying grilled cabbage a year ago, it quickly became my favorite grilled veggie—and that's not something I thought I would ever be saying. To change things up, I finished this one with a different dressing than I've done previously made up of lime juice, earthy chili powder, extra virgin 0live oil, honey, and finely chopped cilantro. 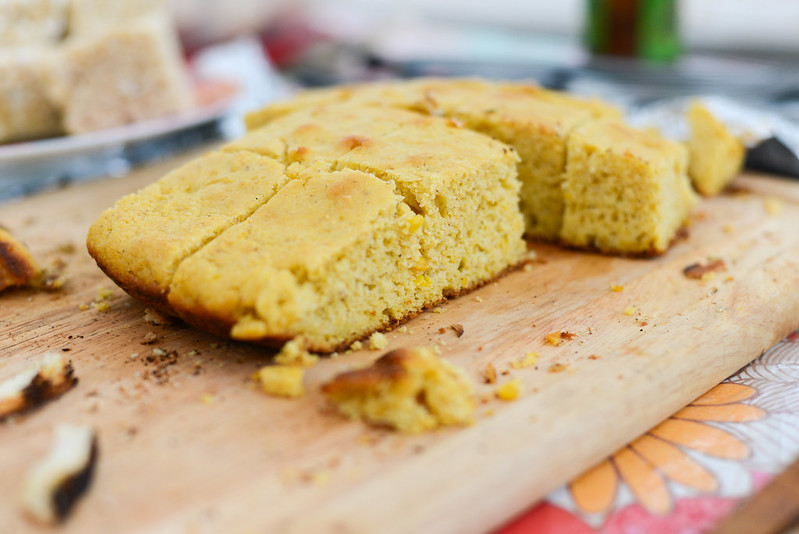 I did a much better job of capturing other people's contributions to the spread this time around. First we have a fine cornbread brought by Meredith, which was a great side to go with the ribs and wings in particular. 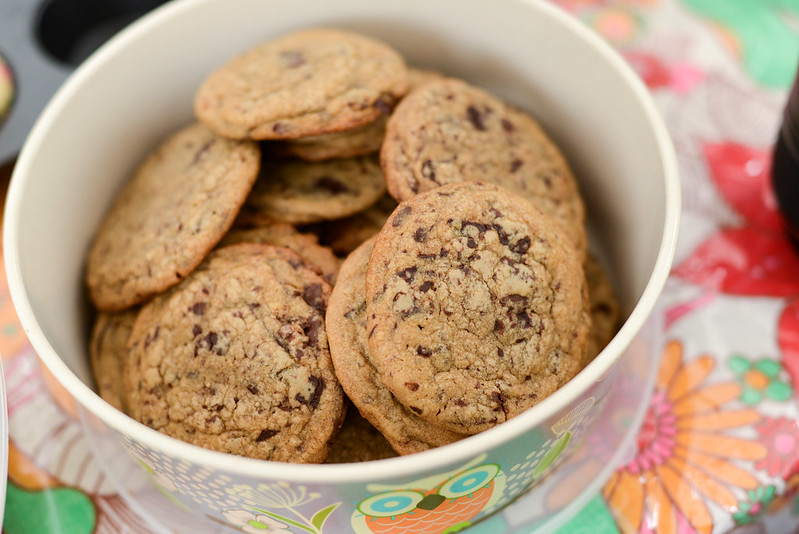 Next we have my favorite contribution of the day—Thomas Keller's chocolate chip cookies made by Chris. I've tried this recipe myself in the past and didn't have much success, so reverted back to my Alton Brown mainstay. Chris's cookies were so awesome thought that they've convinced me I need to give the recipe a another shot because they put any cookie I've made to shame. 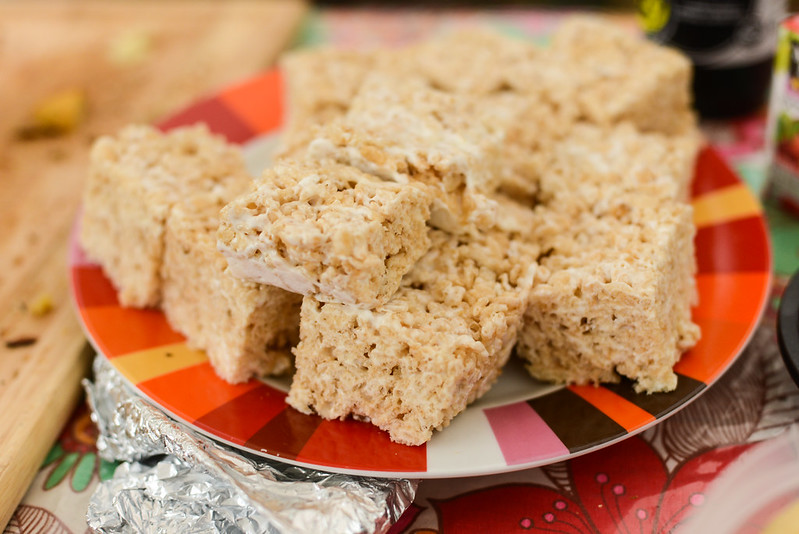 Leslie stole my heart with these Rice Krispie treats. These were much like the salted brown butter treats our buddy Anna made for us back in New York, but even gooier. I selfishly took a ton of these to keep in the house and ate at least one day until they were gone. 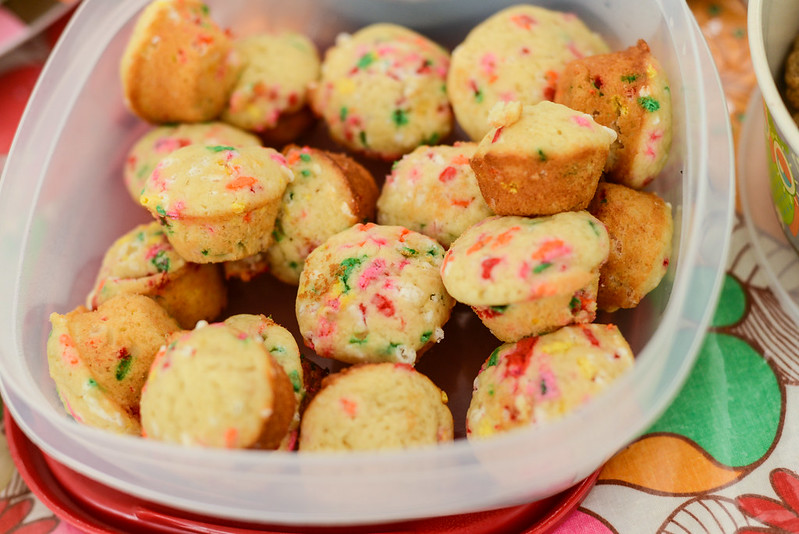 I don't recall who brought these little cupcakes/muffins, but they were certainly fitting because we were celebrating a very special day... 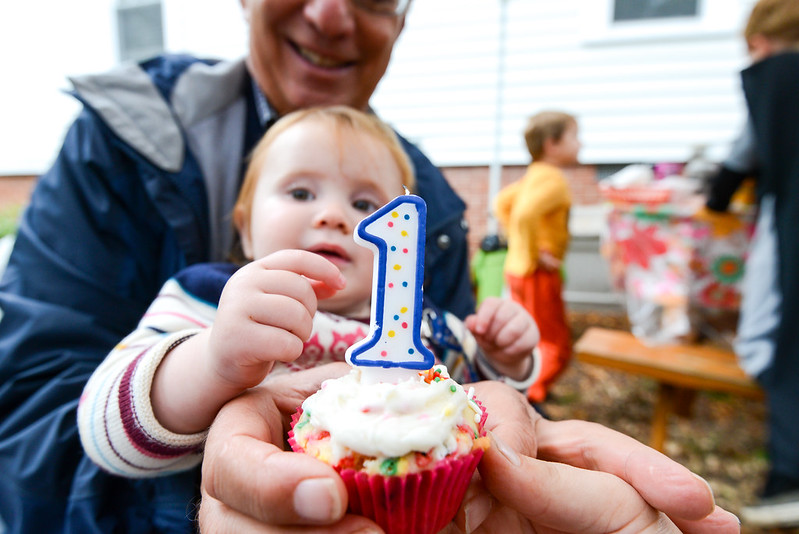 Annabel's first birthday! I was so excited to celebrate Annie's first birthday that I was determined to host this Meatwave rain or shine—I hoped for the shine, but we made due in the rain pretty well. 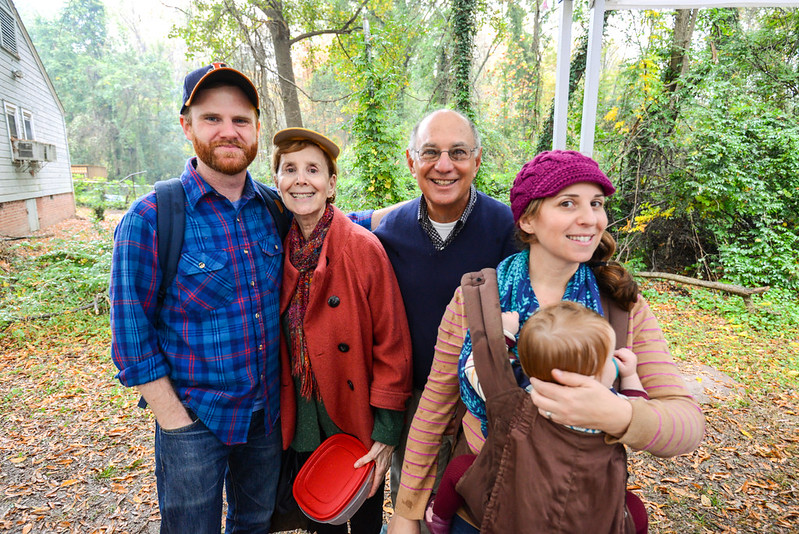 Joining in the celebration was the whole family Abramson. Mark and Ellen were down from Virginia for the special occasion and it was great to be able to host them along with the best family in Carrboro—Bryan, Jenny, Benji, and Annabel. 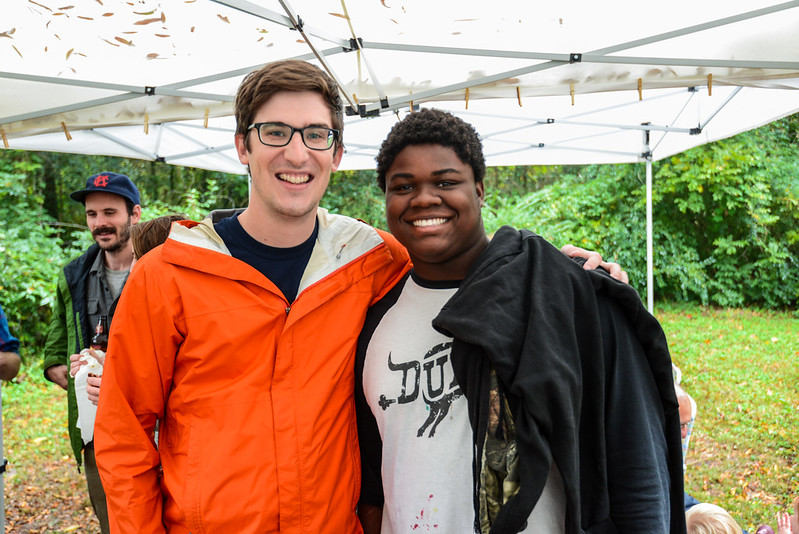 Zach made it out in the rain and brought along his brother-in-law Caleb. 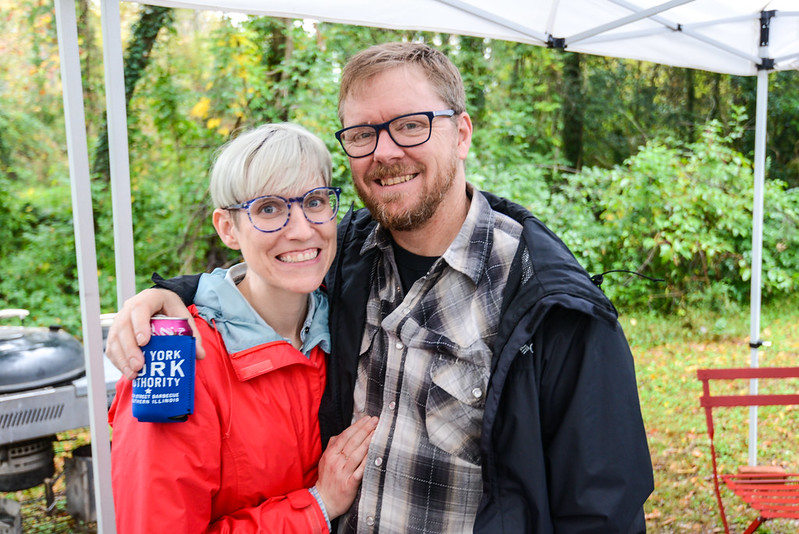 Kris and I are so lucky to have made friends with Steve and Leslie. Truly a couple in the know in Durham, they've been a crucial link to learning about happenings around town and getting out and meeting new people. They're such lovely people we hope they'll become Meatwave regulars. 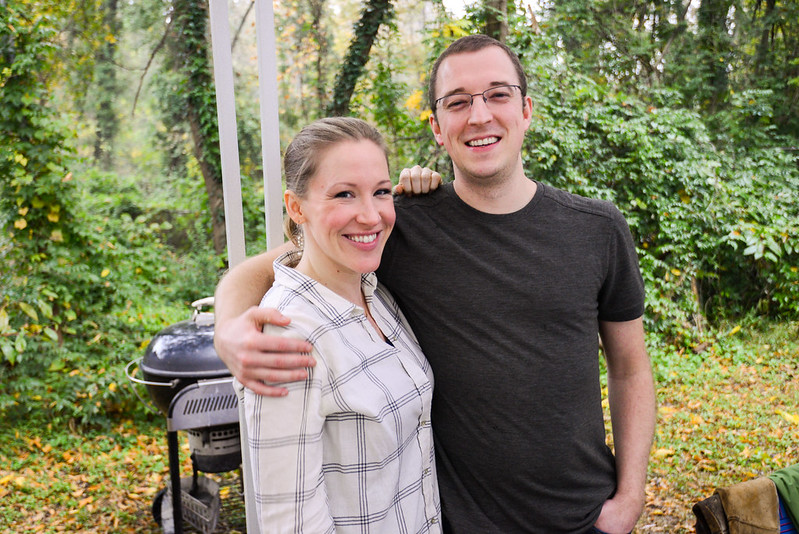 Next we have Josh and his lady Ashely. Josh brought along some more fine home brews for sharing and made a desperately needed beer run when the cooler almost ran dry—which would have been a horrible state of affairs. 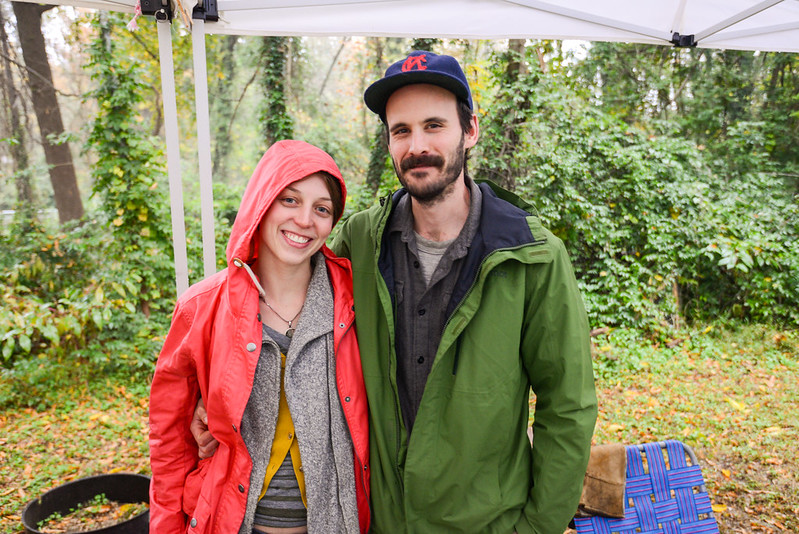 Last, but not least, we have Evan and Meredith. Evan wasn't able to attend last time around, so we were glad he could make it out this time around. They're a couple of woodworkers and we're looking forward to seeing their work in a gallery event soon here in Durham.

This was such awesome Meatwave, I'm hoping that my new home may provide something I never thought would be possible previously—a Meatwave in December! We've been really lucky to meet such a good group of friends so far that I want the keep the good times going and not have to wait until Spring to have everyone over again. Here's to hoping that this isn't the end of the Meatwave 2015...