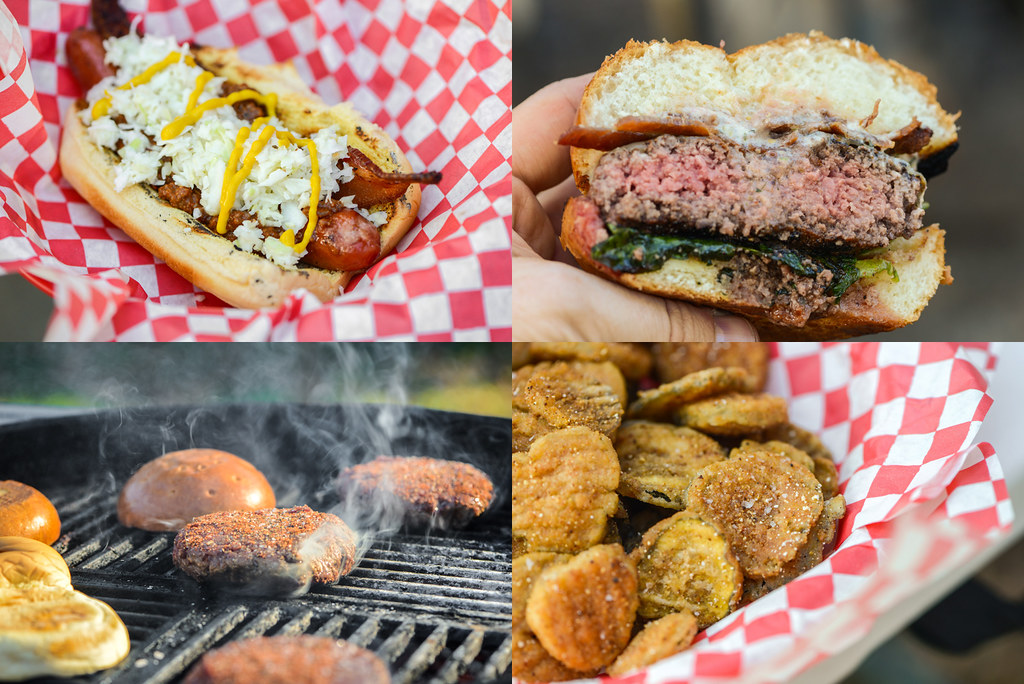 Part of the allure of a move south was an extended Meatwave season. I assumed this meant I could host barbecues starting late March and into November, but I was a bit unprepared for the stray 70 and 80 degree days in the dead of winter. Last winter I had taken on a large freelancing load, so when that beautiful 70-plus day in the middle of February struck, I was sadly chained to my computer, unable to be outside basking in grilled glory. I vowed not to let that happen this year, but when the first really warm weekend of the winter rolled around, I was still in full loaf mode and didn't quit feel like working nights in the kitchen to cook up an elaborate feast. My wife reminded me that not everything I do needs to be so involved and to just go classic with a simple hot dog and hamburger affair, so I took her advise, enlisted my friends, and put together the very first February Meatwave on a beautifully sunny and warm winter day. 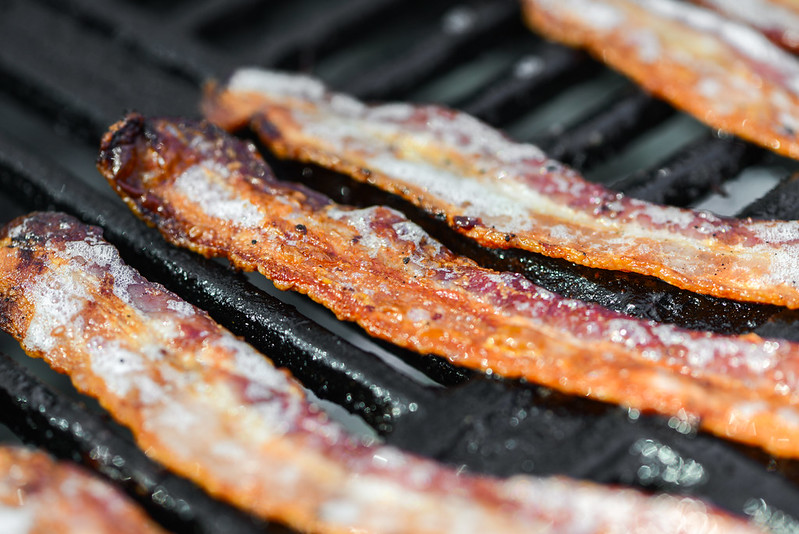 Of course, I can never keep things as simple as just hot dogs and hamburgers. I had few specific creations in mind for each, plus a desire to present my guests with an array of toppings to allow them to dress up their meats however they saw fit. This led me to start the day off by grilling a couple pounds of bacon, which is pretty quick work on the grill thanks ample cooking space and a hot fire. 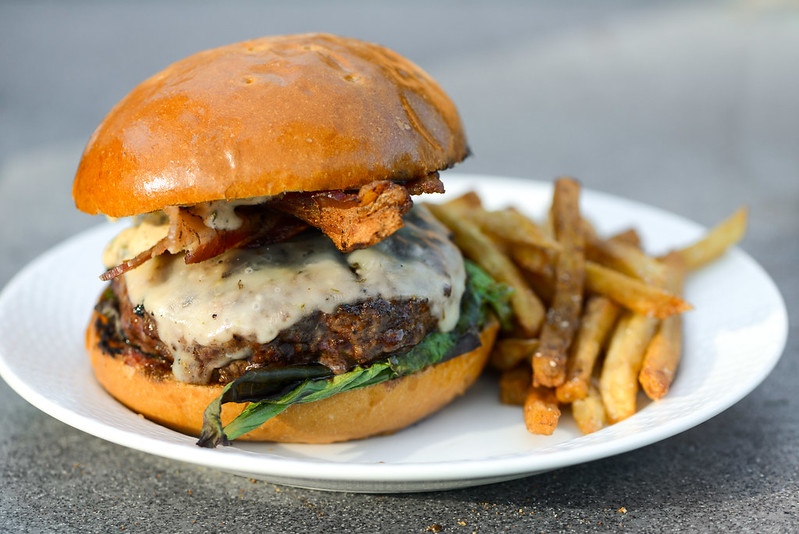 That bacon then went on to be part of my first burger incarnation—blackened cheeseburgers with grilled bacon and a Louisiana remoulade. To make them, I coated chuck patties in a blackening seasoning and grilled them to medium-rare. I then melted a slice of pepper jack on top before placing the burger on a toasted brioche roll with lettuce, bacon, and the remoulade. The end result was a flavor packed burger with a nice bite of heat to it. 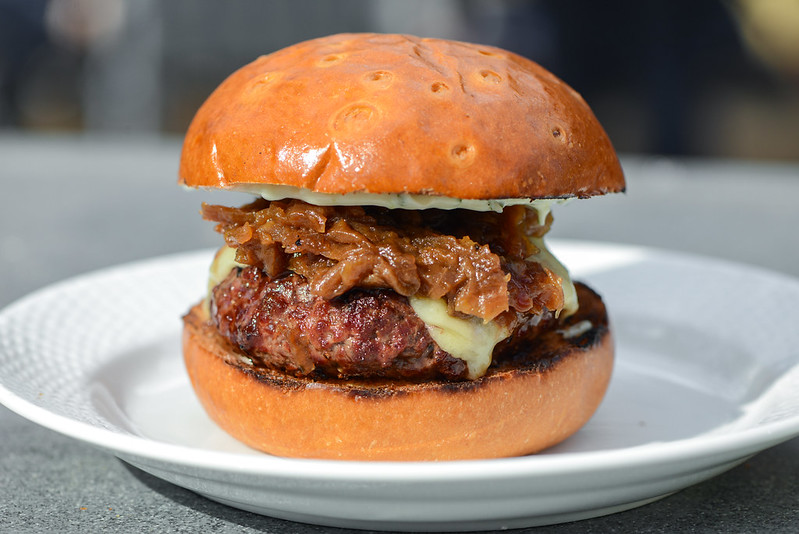 The second burger, and my favorite bite of the day, was this French onion variation. It was assembled by placing a medium-rare patty with melted gruyere on a bun wth a generous portion of caramelized onions and a spread of a homemade garlic-herb mayo. This combo came together to create an overall flavor reminiscent of a French onion soup, which is what I would more likely be cooking in mid-February if I were still back in frigid New York. 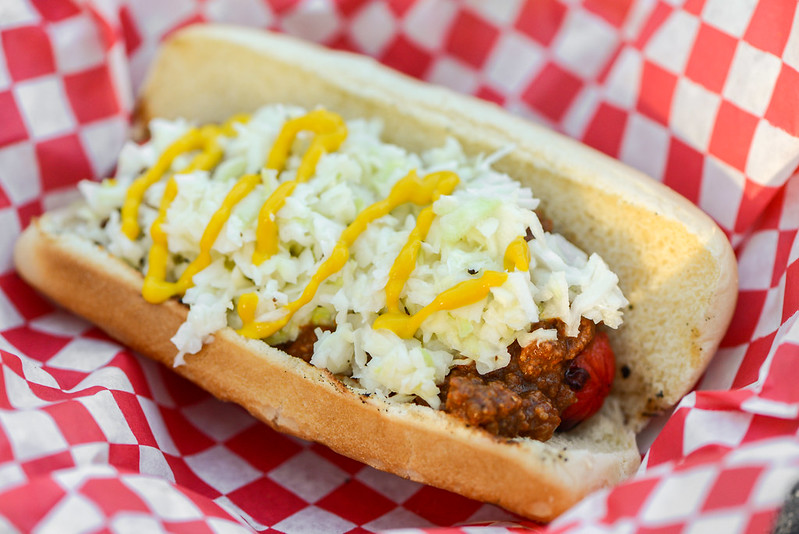 While I mostly enjoy my North Carolina eats—it's hard not to when butter and mayo are central to most regional dishes—I've yet to come around to NC hot dogs. To me, a natural casing Nathan's is hot dog is perfection, and the local beef and pork Brightleaf dogs in North Carolina just can't compete. Trying to be a better steward of my adopted home though, I picked up a pack of these electric red oddities and served them up NC style with chili, slaw, and mustard. I have to say, in this incarnation, I kind of got it. Taken altogether, this was a might tasty combo and the lighter flavor of the Brightleaf franks let the chili and slaw shine through, which was a good thing. 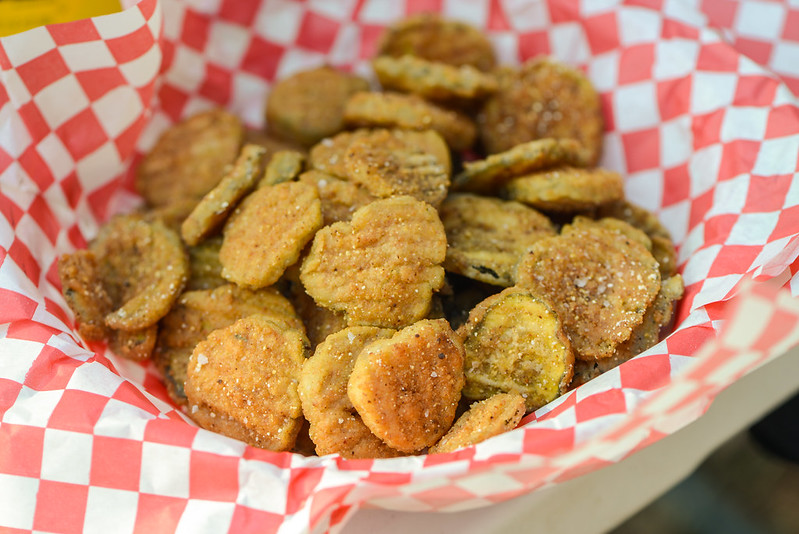 I decided that to make a batch of french fries for an appropriate side to complement the day's mains, and while I had that hot oil going, I also fried up a batch of pickle chips. I altered my recipe this time around in an attempt to get a thinner, but just as crunchy, crust compared to the recipe I had been using for years now. This had me cutting back the cornmeal and flour a bit and adding cornstarch into the mix. All were the right moves as I felt these were the best fried pickles I've ever cooked up. 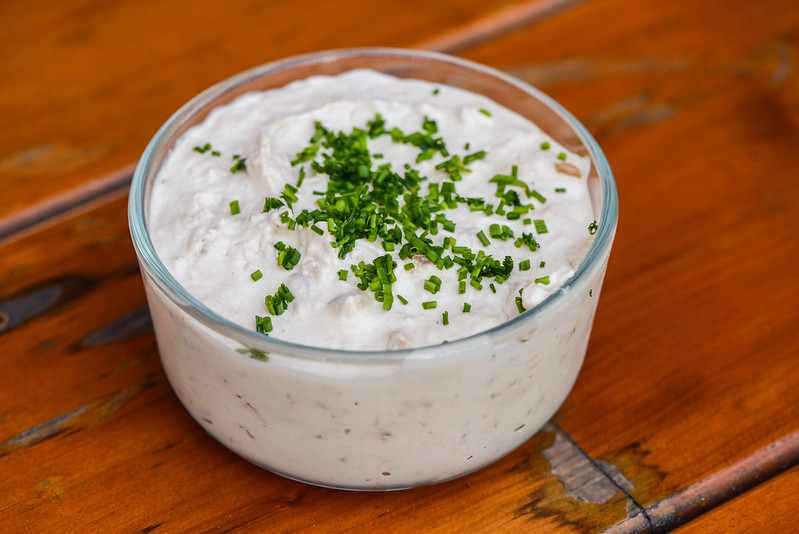 Whenever I cook caramelized onions I always make a ton since they're so delicious and versatile, I just like having them on hand. With some the excess I made for this Meatwave, I put together this Fresh onion dip which, luckily for my happiness, but unluckily for me health, was still mostly in tact at the end of the day, letting me continue to indulge in it throughout the entire next week. 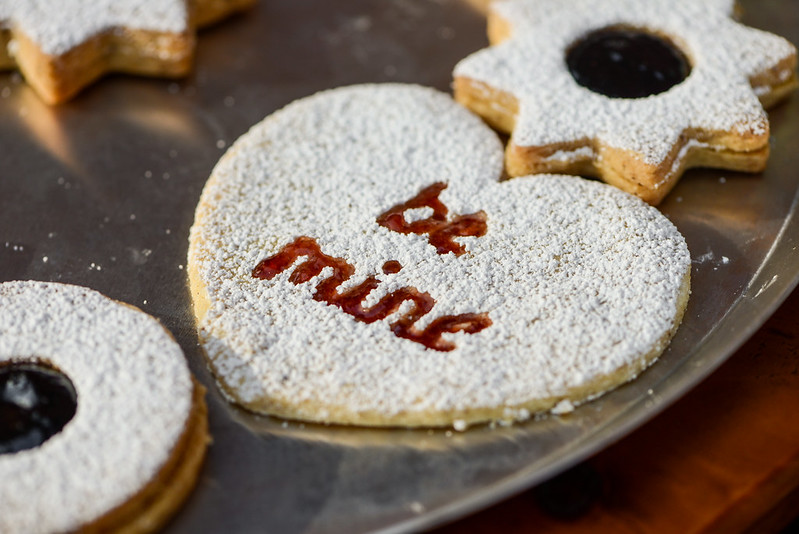 The proximity of this Meatwave to Valentine's Day inspired Kristin to make these fantastic Linzer cookies in heart shapes with appropriate holiday candy heart messages stamped in. 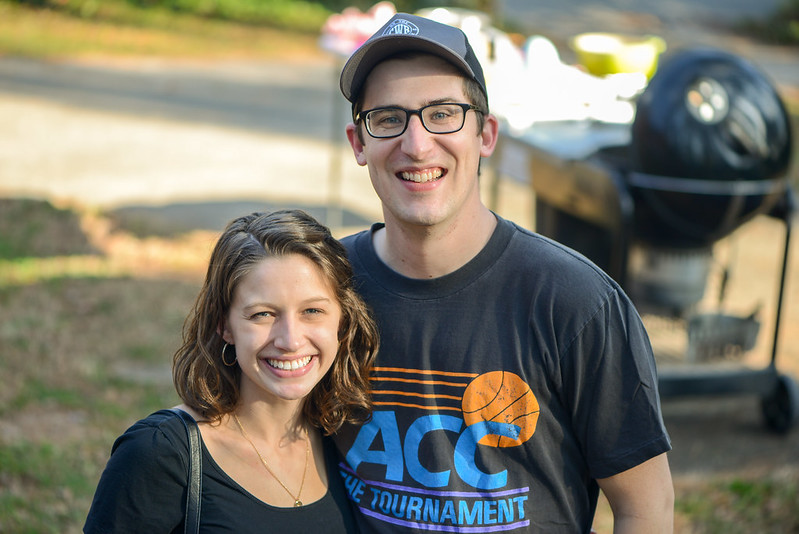 While I was all amped up to be hosting a barbecue in the middle of winter, I worried that the off-season, even though the weather was ideal, might result in waning interest. That fear was either unfounded or my friends are just the best as we had a good crowd come out and partake starting with Zach and Maria, who also happened to recently move into the neighborhood. 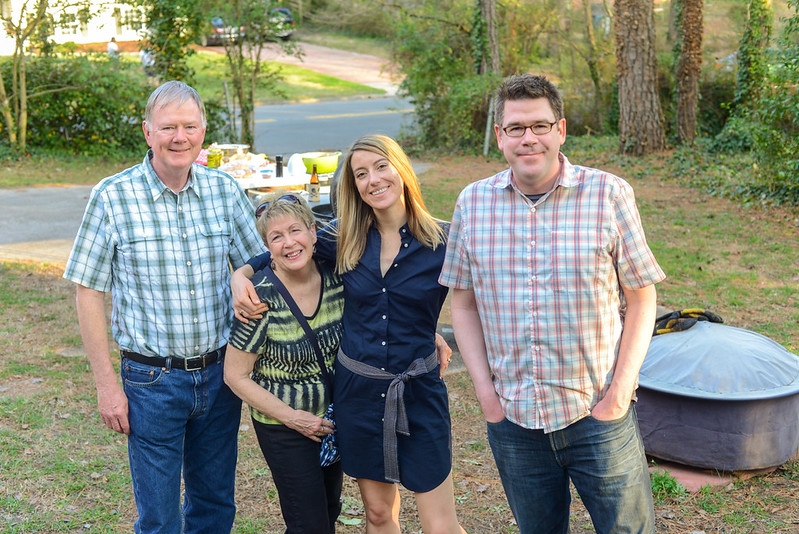 Andrew's parents were in town visiting, and he rightly thought one of the best ways to spend the afternoon with them in Durham was at the Meatwave. We had a great time hosting them, along with Kim, and hope if they come back, we'll be able to enjoy their company again. 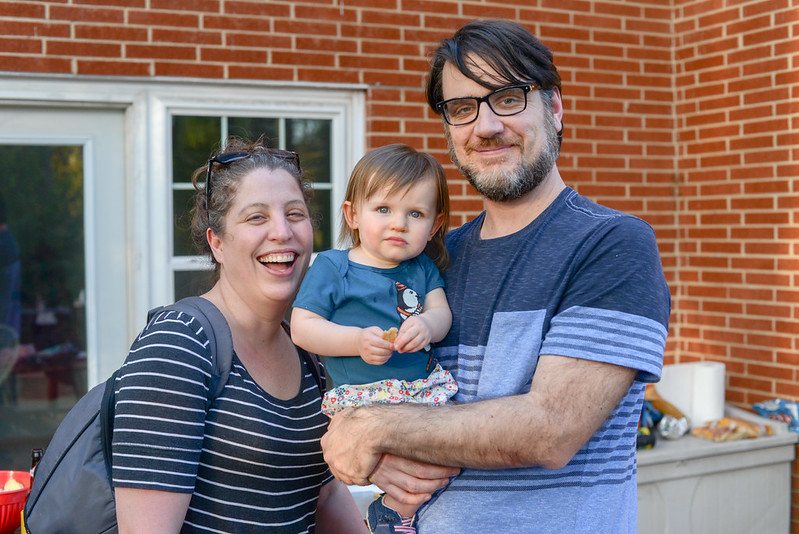 Alice was all about coming to a mid-winter barbecue, and thankfully that meant her parents—Chris and Lindsey—were forced to make an appearance as well. 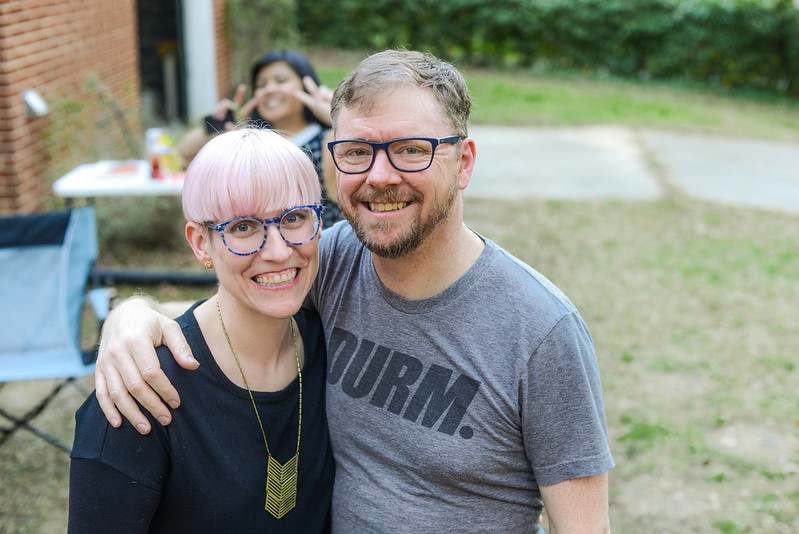 Of course Steve and Leslie made it out—they are becoming the true Meatwave regulars in this new location. 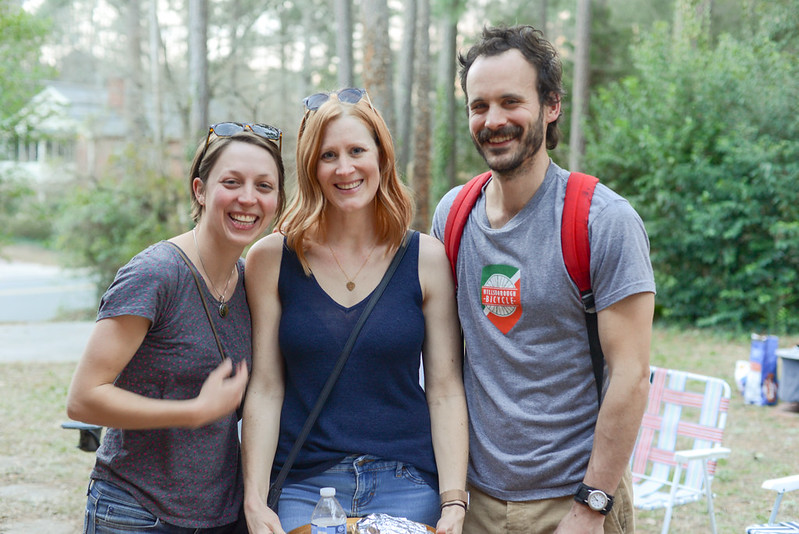 And finally we have Meredith, Lindsay, and Evan. Meredith and Evan recently made a move to Durham and now are within biking distance, which hopefully will translate to getting to hang with them more.

So the first outdoor winter Meatwave is in the books and I'm hoping this will become a common occurrence in the future, especially as I'm learning that the ideal cookout season rests in the shoulder seasons here—the summer is just too damn hot to sit comfortably outdoors next to a hot fire for hours one end.