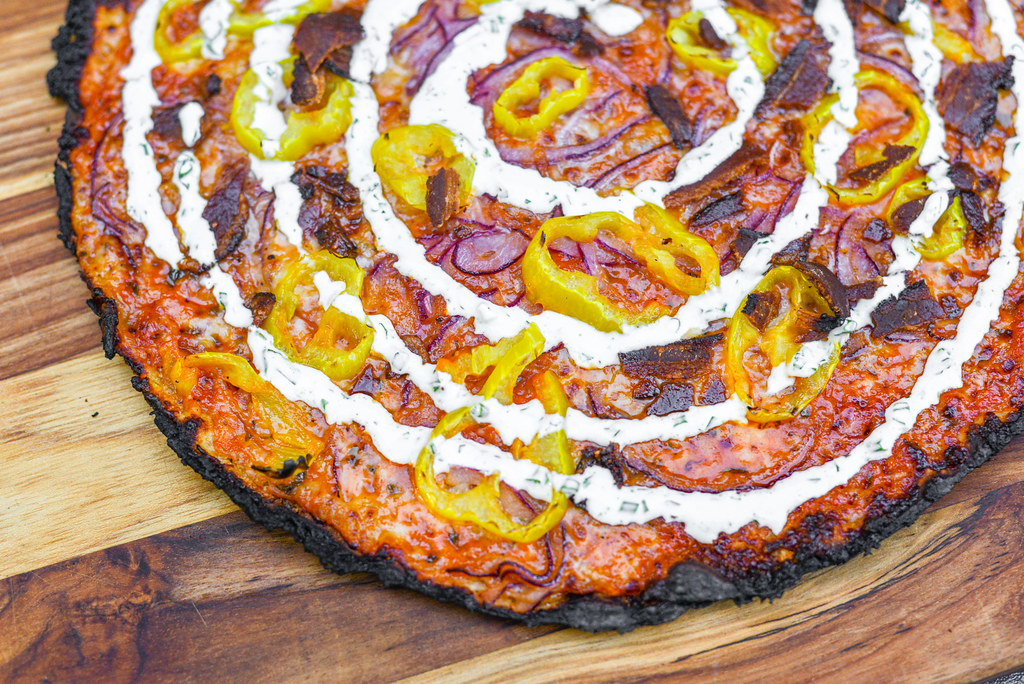 Prior to when I starting dating my wife, I had never heard of or saw anyone eat pizza with ranch. I'm not sure of the exact regionality of the practice, but it's definitely a thing in Texas, which is where my wife hails from and where I learned what I thought was just an off quirk of hers was actually a standard. I have not yet become a person who reaches for the ranch when a pizza arrives, but I have come around to thinking that, in certain scenarios, ranch is quite a fine match for pizza. I actually devised this pizza with ranch in mind first, then built up the toppings based on what I thought would be most complimentary to that herbal tang—bacon, red onion, and banana peppers. If you've yet to try ranch with pizza, or are not fully convinced it's a good thing, this might just be the pie that could change your mind. 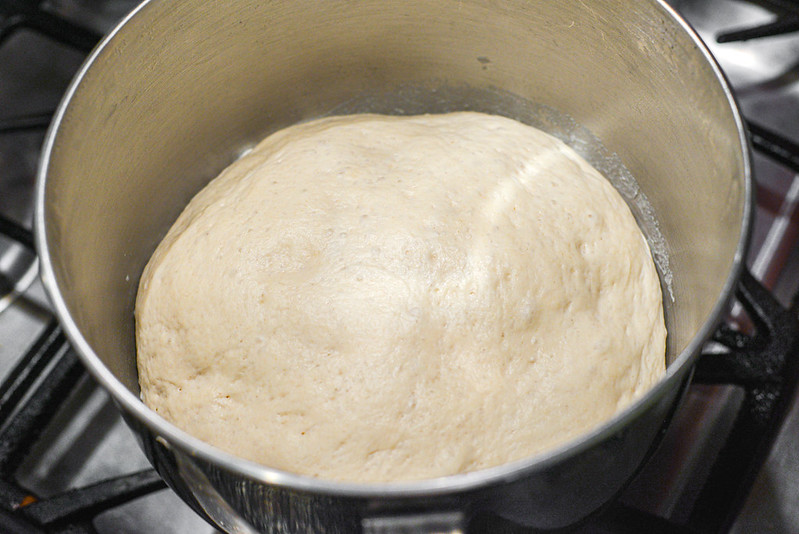 After deciding that this was a good topping combo, I thought about the best form for this pizza to take and landed on the bar pie. This thin and crispy style of pizza has its roots in New England, with Colony Grill in Connecticut being the name most associated with bar pies, but I was introduced to it by my friend Adam Kuban when he began running a pop-up called Margot's Pizza. I was immediately taken with the pizza he was creating, and after leaving New York, I began to teach myself how to make them and used his dough recipe as my starting point. 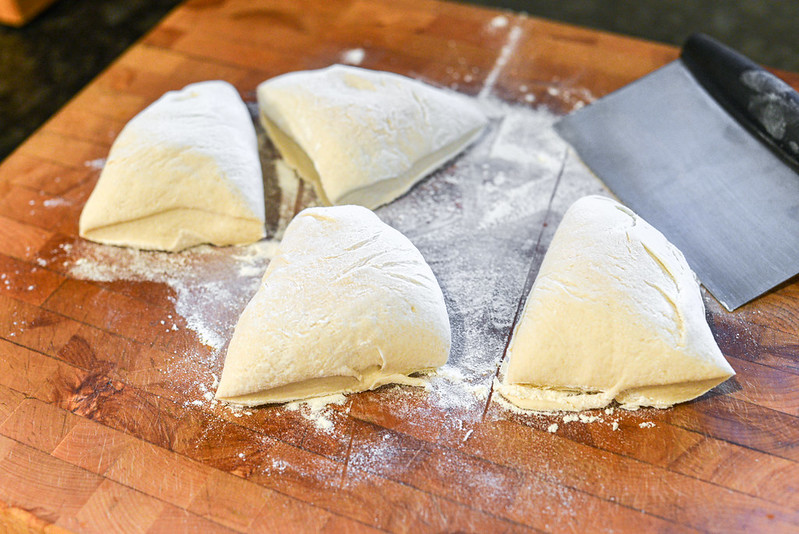 This dough has a lower hydration ratio than a Neapolitan-style recipe, but it still implements a similar long rise and fermentation period to develop good flavor. After an initial six hour rise at room temperature, the dough is quartered, covered, and placed in the fridge for two or three days for fermentation. 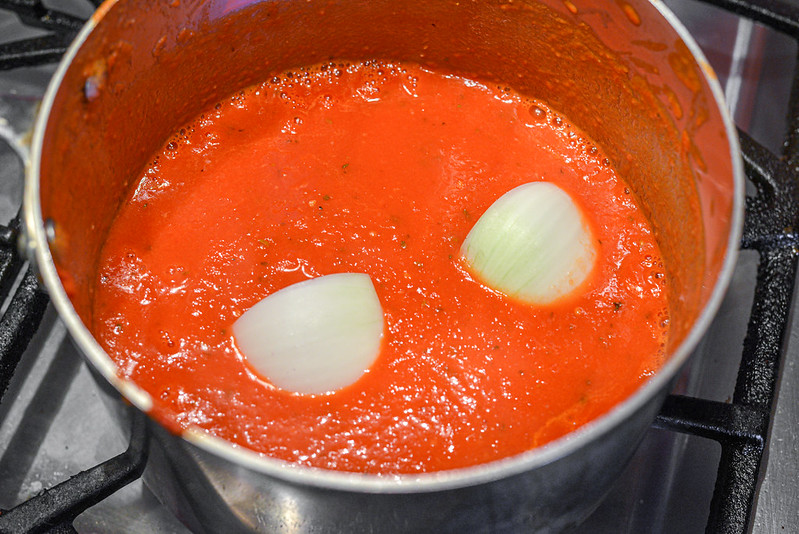 I don't make pizza all that often because it is one of the more labor intensive endeavors, but the pay off is usually high. Although a lot of things go into making a pizza, a nice part of that is that many steps can be done in the days leading up to the actual baking. I had made the dough a few days prior to cooking, then a couple nights before, I put together the sauce, which I used my fairly minimalist recipe that has garlic, oil, oregano, and a can of tomatoes simmered with a couple onion wedges until slightly thickened. After removing the onions, the sauce gets a final seasoning with basil, salt, and pepper to finish it up. 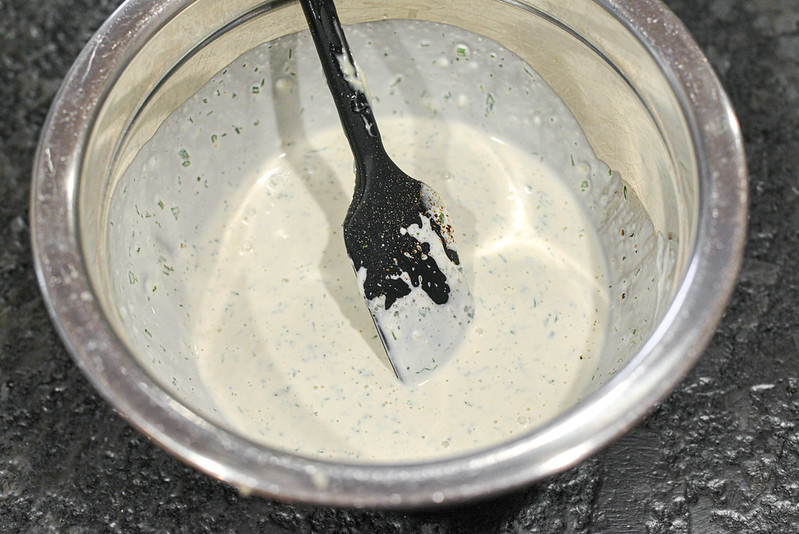 The night before cooking is when I put together my ranch, which I now have two solid recipes for—one that utilizes fresh herbs and another with dried ones. The dried herbs and powdered buttermilk version creates a ranch more akin to a Hidden Valley packet, which is a baseline for my wife. I personally prefer the fresh herbs though, and after years of not getting it quite right enough for her more discerning taste buds, I finally have a recipe that's agreeable, which is the one I went with here. 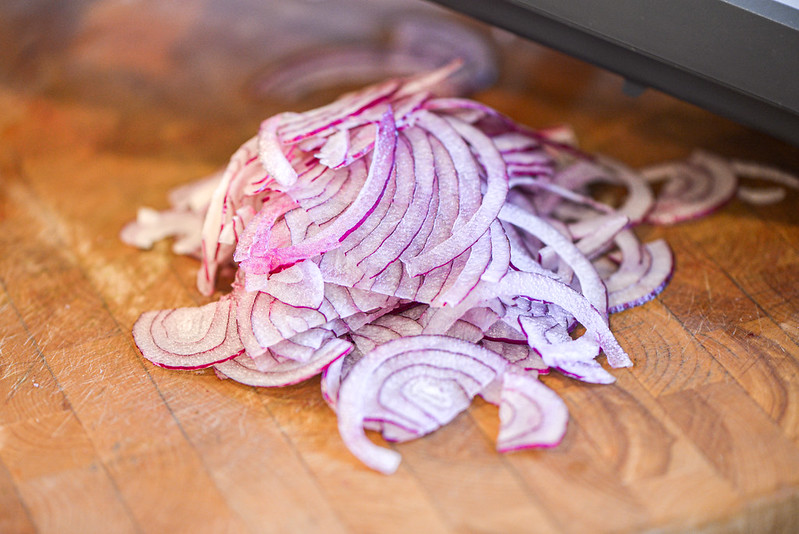 The remaining toppings I prepped the day of. The red onion was first, which was quick work thanks my mandoline. I used to not be a red onion-on-pizza guy, but I've found I do really like it, but thicker slices tend to be too sharp and distracting for my taste. So I go with paper thin slices, which I can load a pie up with and love it. Those thin slices meld more and also cook faster, which tempers their bite and sometimes develops a nice sweetness, even in the quick pizza cooking times. 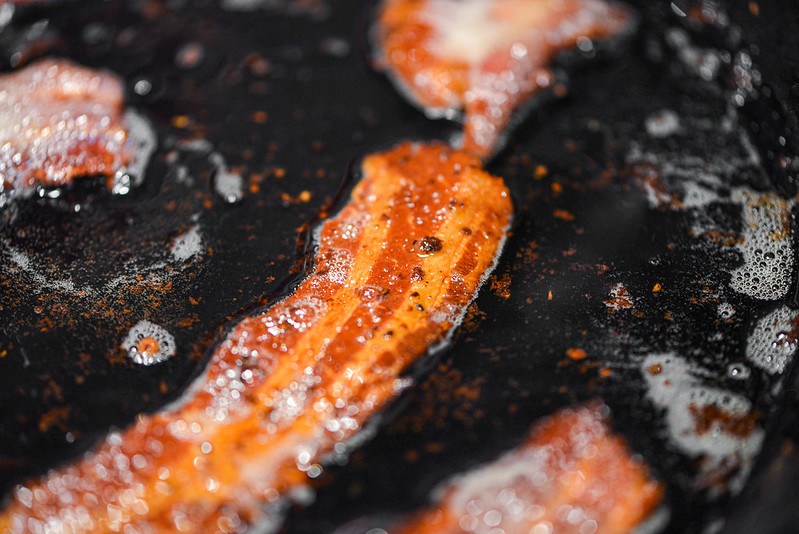 I normally advocate for grilling bacon, and have a good guide on how to do this, but on this particular day, I only needed a few slices for one pie, so opted to go stove top. I've become a fan of lower heat cooking using a bacon press in a cast iron pan, which solves some of my qualms with pan frying—it doesn't shrink quite as much, it doesn't splatter nearly as much, and I get even cooking thanks to strips all being in good contact with the pan. I used my homemade spiced-cured bacon, which has become my go-to bacon that I always have on hand in the freezer these days. 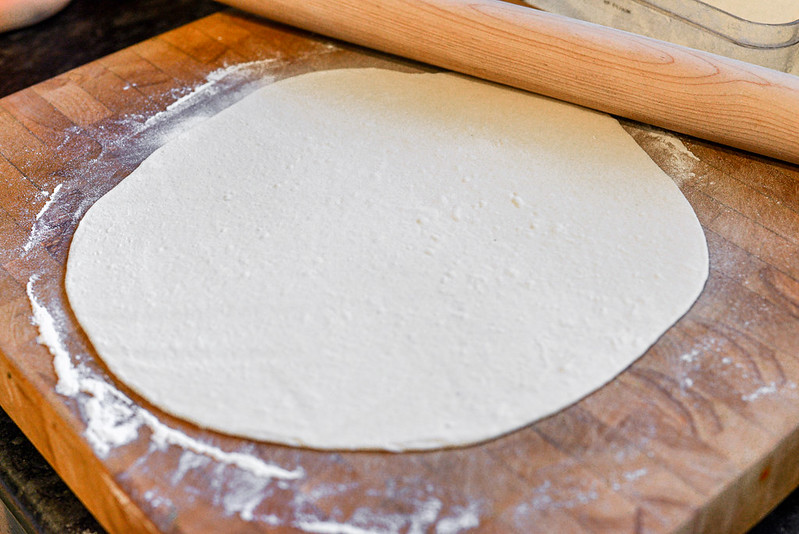 A couple hours before cooking, I removed the dough from the fridge so it could come to room temperature, which makes it easier to stretch. I'm not the best dough former, so I enjoy that bar pies call for using a rolling pin to get the dough very thin. After getting a decent 12-inch circle, I transferred the dough to a pan and began topping. 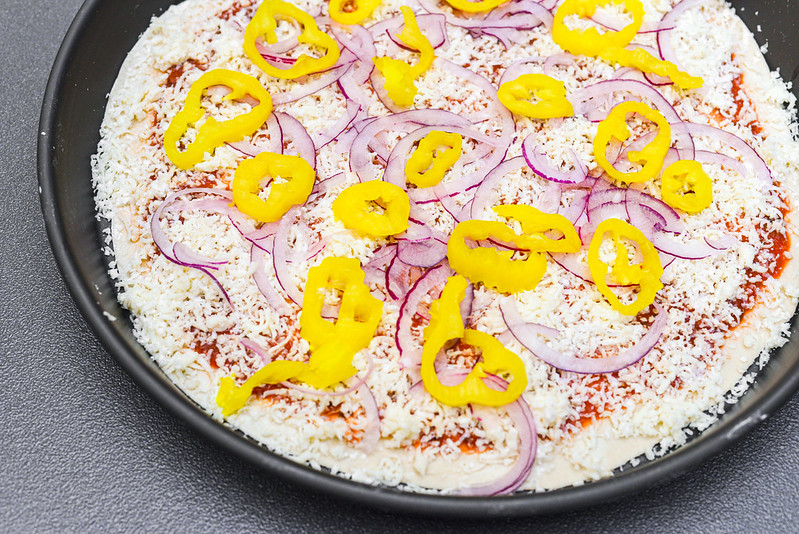 First went on the sauce, leaving only an half-inch edge. I then sprinkled on a mixture of low-moisture mozzarella and parmesan all the way to edge of the dough and beyond because extra cheese on the crust is a hallmark of the bar pie. I then added on red onion slices and banana peppers, holding off on the bacon at this point so it wouldn't burn during cooking. 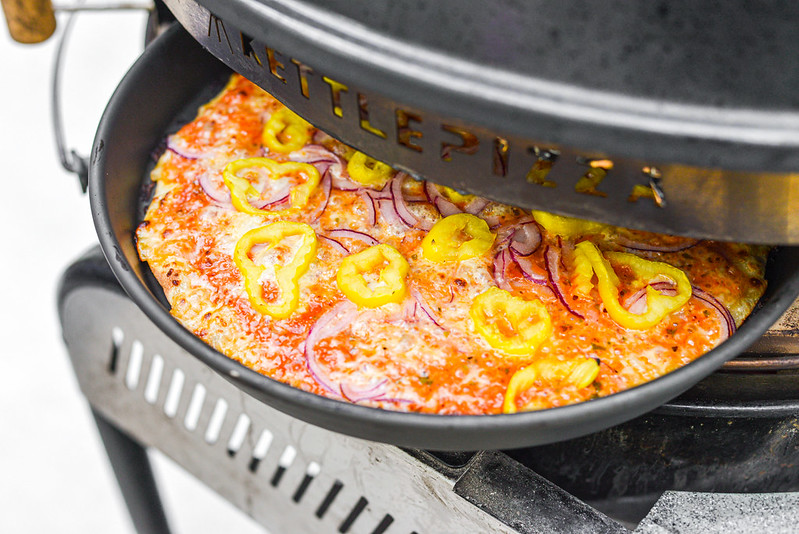 Prior to this day, I had only made bar pies in my regular oven, so using the KettlePizza was a new for me and going from 550°F to 950°F definitely presented some challenges. There's two stages of cooking here: the initial cook is to get the cheese melted—you're going for bubbly here where you start to get separation between the fat and solids. Since the KettlePizza is not an even heat source, I had to rotate the pan occasionally to ensure the pie cooked well all around, and with it being in a pan, it was more of a challenge to see how that was going—I slid it out at each turn to judge how things were going and which areas needed some more time closest to the fire. 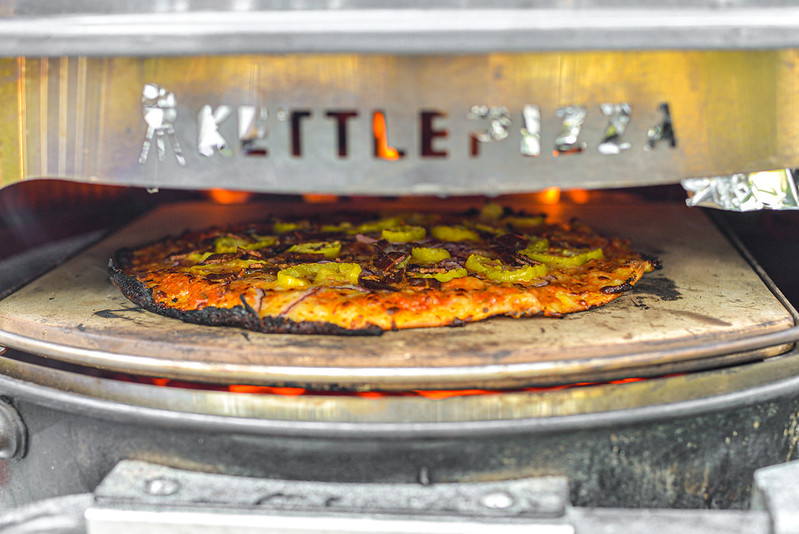 After the first cook, the pizza is fired again, but this time outside of the pan to crisp up the crust. The melted cheese sticks to the pan, so I ran a thin spatular around the crust to release the pie. This is when I added the bacon so it would get some heat before serving. Then once the pizza was back in the oven, it browned underneath in no time, but the outer ring of cheese also turned deep black too, which is not something that has happened at lower temperature cooking for me—it's usually a more attractive deep golden brown. 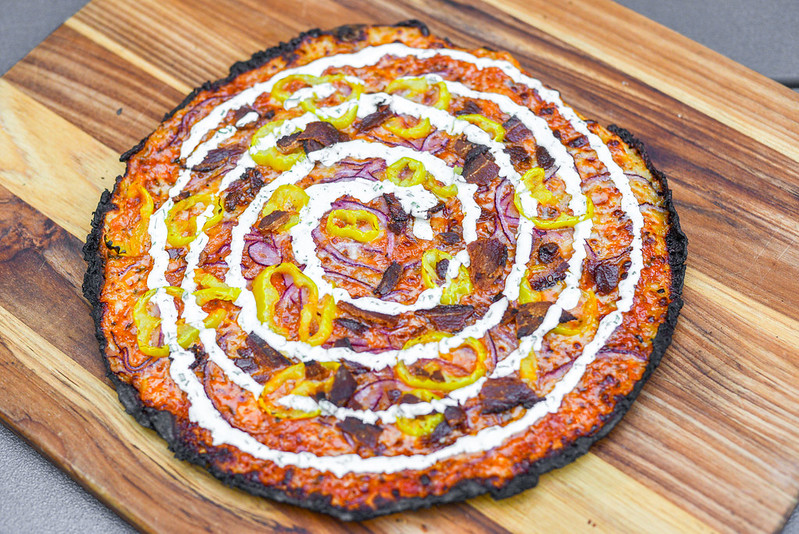 Luckily looks were deceiving and that dark ring did not actually taste burnt in most areas and had a pleasing crunch and lightly charred flavor. The real star was the topping combo though, which all came together after the final application of a ranch swirl. That creamy and cooling ranch added a tangy and herbal touch that both complemented and contrasted with the tart and lightly spicy banana peppers. Those were the most dominant toppings, but each time I hit a bacon piece, a pleasing salty crunch entered the party too. The red onions had a good presence, but they more-or-less blended in with the whole experience that included a well crisped crust, tangy tomato sauce, and the cheese. While this is different than reaching for a bottle of ranch each time you're eating a pizza, it definitely provides a good argument that the two are made for each other.

Dough recipe by Adam Kuban, published in Elements of Pizza by Ken Forkish. 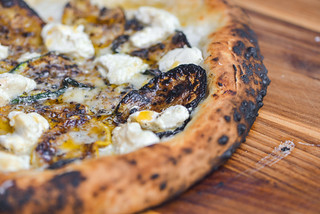 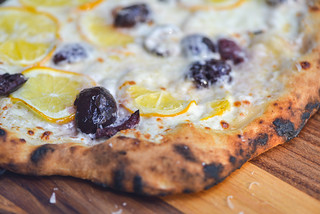