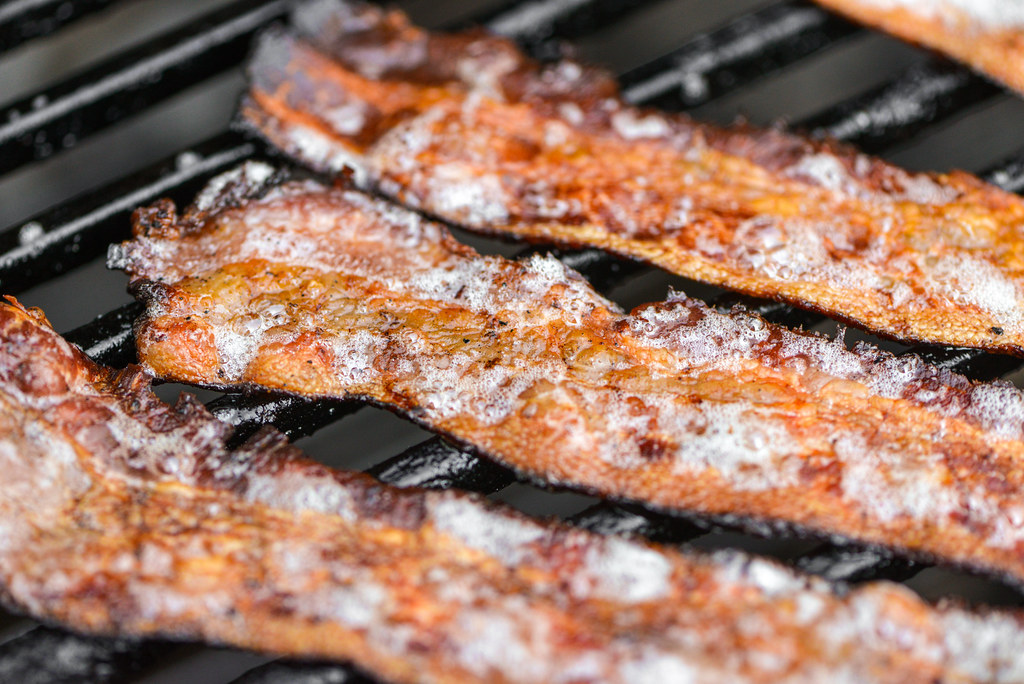 I'm a bit ashamed of how long it took me to make my own bacon, but after an initial positive experience with peppered bacon, I realized that making bacon at home should really become my norm going forward, and not the exception. I made a full five pound batch of peppered bacon which only ran out not that long ago, so it was time try out some new bacon recipes. In my latest venture in pork belly curing, I made two different versions at once, a maple-cured bacon, and this spice-cured bacon, Both were equally delicious, but the spice-cured variation had the honor of being the first one used in a recipe, making it the first to appear on the site. 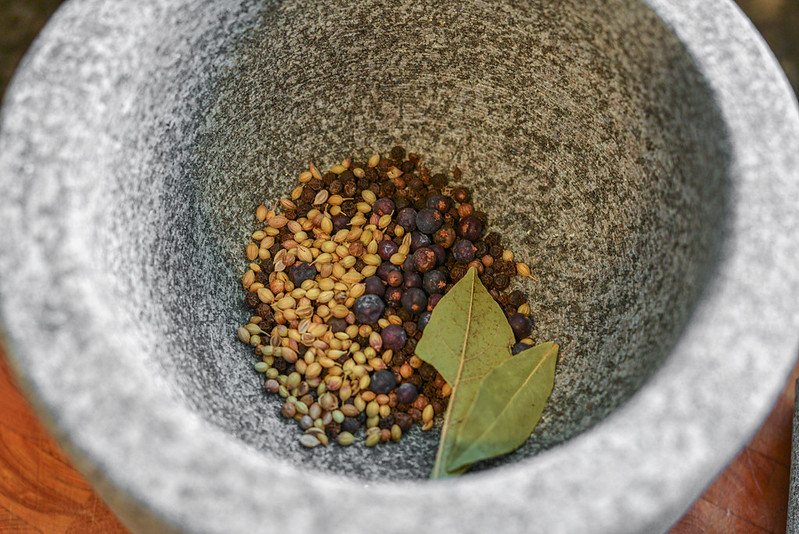 The reason the peppered bacon lasted as long as it did was because I couldn't use it universally—not everything I cooked with bacon warranted a strong peppery crust. So this time around I was looking for something I could use in any scenario, but also somewhat unique, and took some cues from a recipe I saw by Michael Ruhlman that used a variety of spices in addition to the required salts. I did choose to make my own combination of spices, which I started by coarsely grinding black pepper, coriander seeds, juniper berries, and bay leaves in a mortar and pestle. 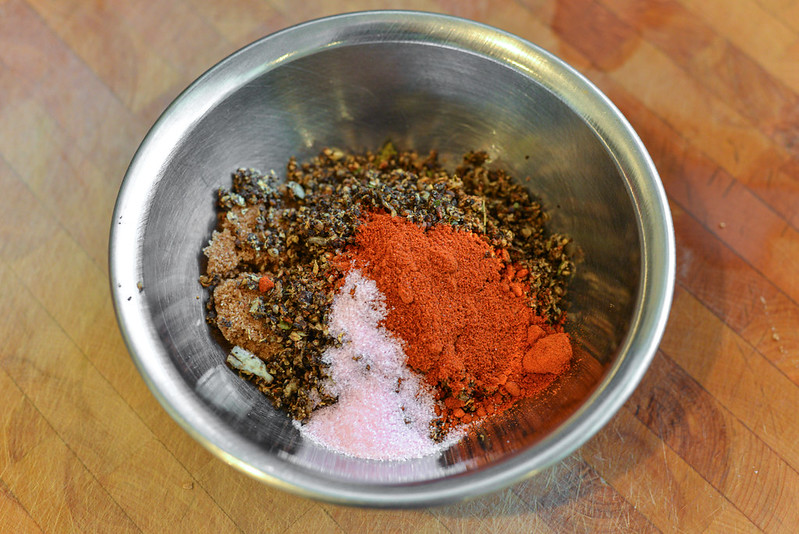 Then, to finish the cure, I mixed those with paprika, brown sugar, kosher salt, and pink curing salt. I wasn't sure exactly how much of this flavor would really work its way into the meat, but the mixture smelled wonderful thanks to the freshly ground spices, and that made me excited to see how it would turn out. 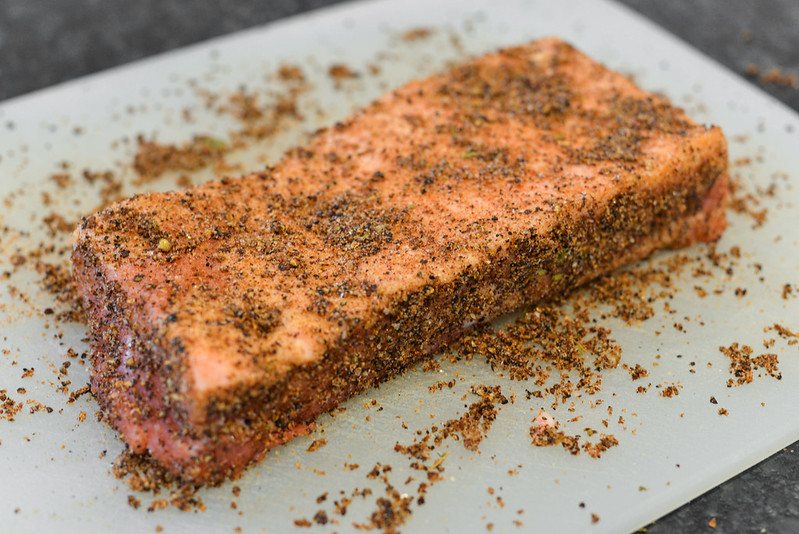 After removing the skin the from the belly—which I turned into some fantastic pork rinds—I rubbed the cure all over the pork belly. The piece I had here was about two and half pounds as I opted to make two smaller pieces of pork belly this time around instead of the one five pounder I did on my first try. 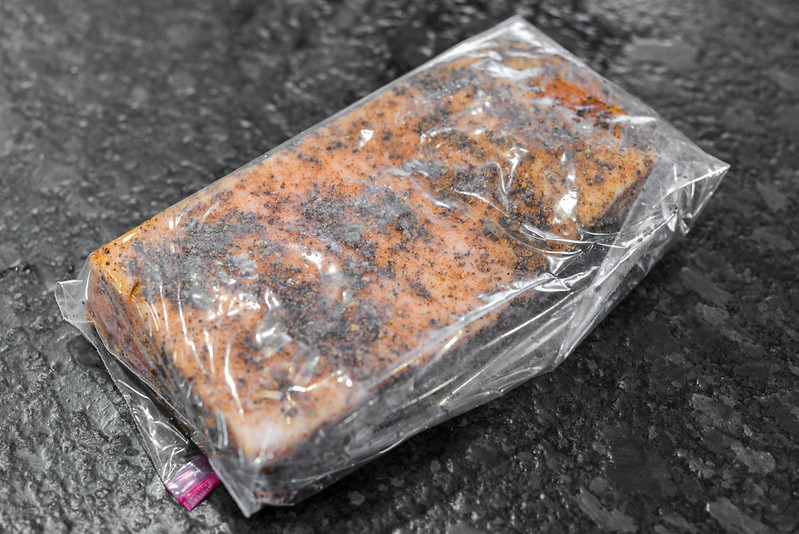 Next step was the long wait. After putting the pork into a one gallon plastic bag, I set it in the fridge and then flipped it each morning, and then again at night, for six days. During that time I saw the moisture become extruded from the meat which was later reabsorbed, and also the meat firmed up a bit, both indicators the curing process was going as planned. 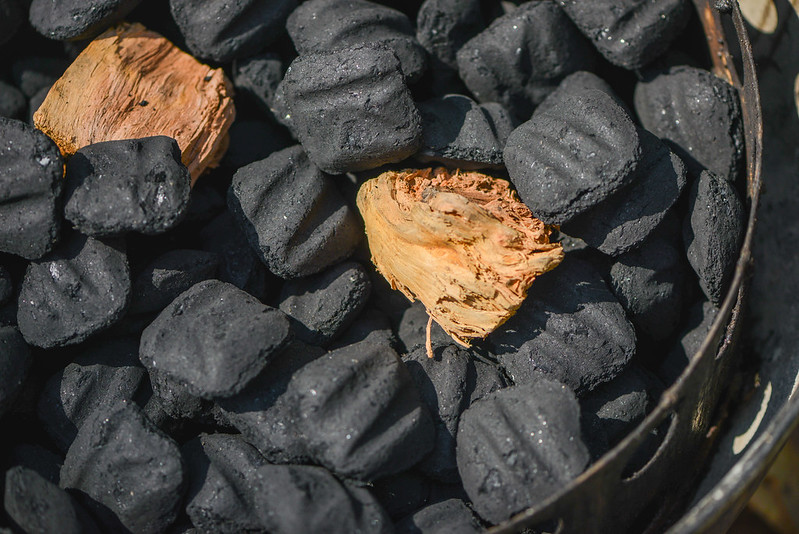 Although my peppered bacon turned out fine, I was trying out some new charcoal when I made it that I had trouble keeping at a low temperature, making the meat smoke way more quickly than expected. This time around I stuck with my trusty Kingsford and a couple chunks of applewood, which I was able to run at around 215°F for the entire cook. 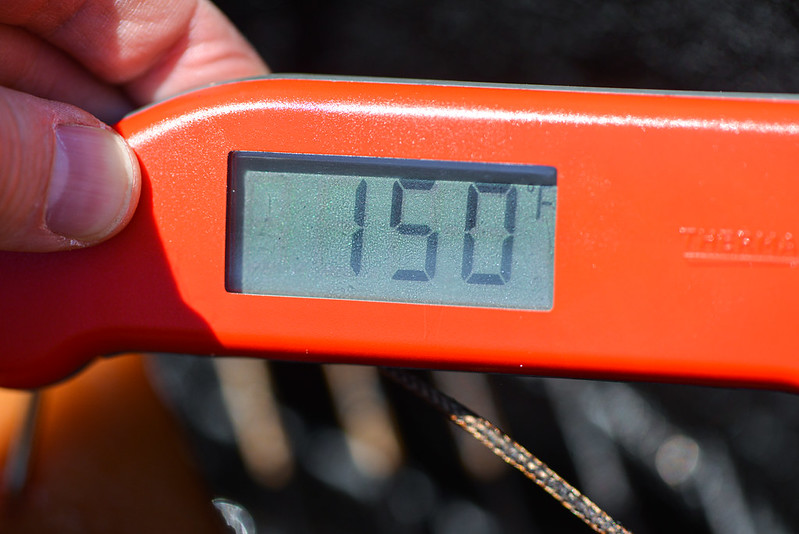 I was looking for the center of the meat to hit 150°F, which took just over one and half hours to do. I used a leave-in probe while the meat was cooking and then double checked the temperature with my Thermapen so I could quickly see if the rest of the belly was also at the right temperature. This was a nice double assurance for doneness—for this piece of bacon, when the leave-in probe hit 150°F, there were areas still closer to 140°F, so a little more time was required to fully smoke. 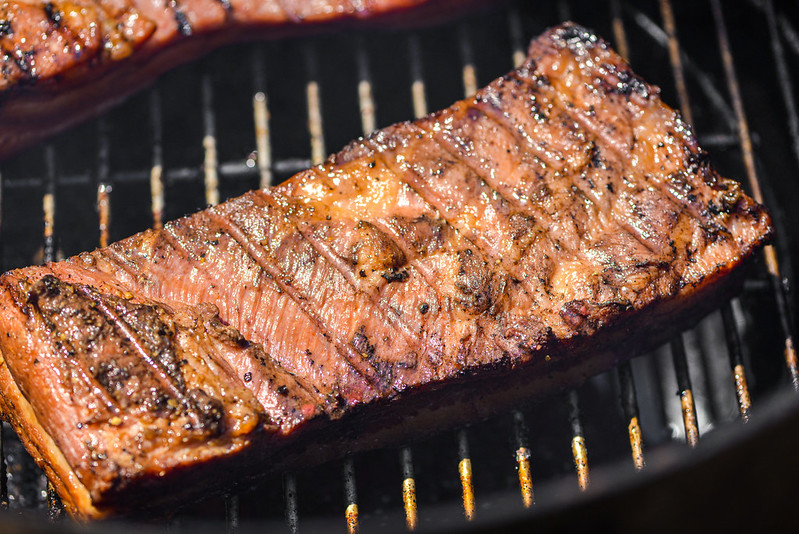 There were two-things that kept me from making bacon for so long. The first was I thought you had to cold smoke it, and I didn't have a cold smoker and never invested the time to convert my Weber Bullet into one. Hot smoking seems to work fine though, with satisfyingly smoky results, the only thing I've noticed using this method is that, since the exterior gets more done than it would with cold smoking, it browns more than the interior of the bacon when cooking it after being sliced. So my homemade bacon tends to have darker edges, which seems to more an aesthetically driven qualm than a taste driven one. 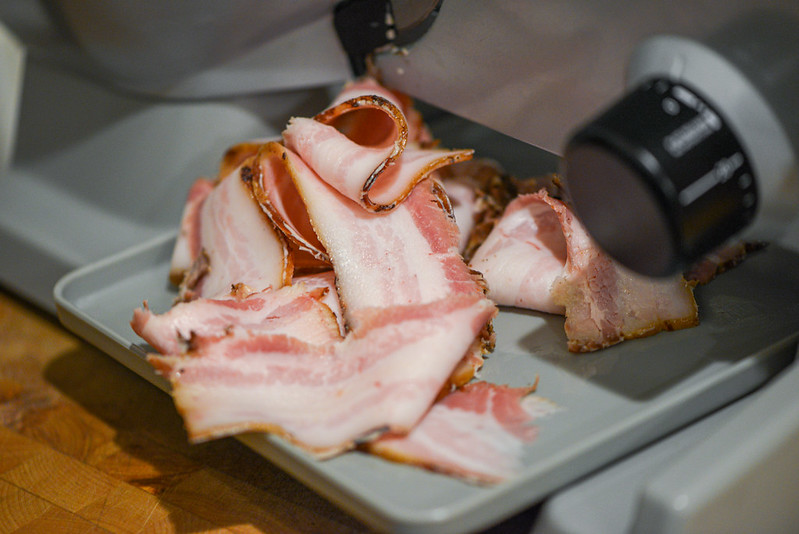 The second thing that kept me from making bacon was the absence of a food slicer. I am, admittedly, very bad at hand slicing—you should see how many ribs I butcher to get just a few well cut ones for photos. So I never felt like I'd be able to make thin, even slices by hand, but getting a meat slicer gifted to me by Mother was a game changer. Slicing the cooled bacon is a cinch with this device, along with the various other things I've been able to do like Baltimore pit beef and Philly roast pork sandwiches. 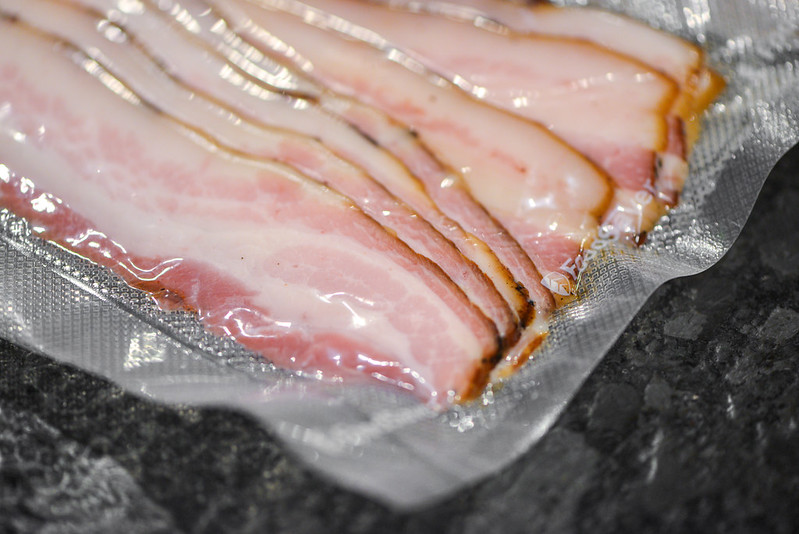 Beyond the sense of accomplishment and better flavor, one thing I really like about making bacon at home is being able to portion it out into serving sizes best fit for my cooking habits. I vacuum seal the bacon into bags with just a few slices for when I need a small amount, and some with more for when I have larger use cases. Once vacuum sealed, they freeze really well and also defrost quickly too. 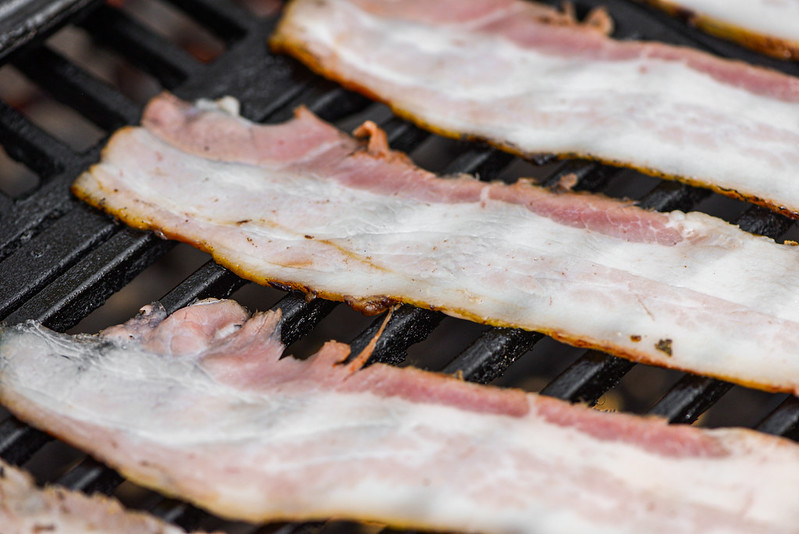 From here you can use the bacon for whatever you want and cook it however you please. If you haven't tried grilling bacon before though, I'll give the process a little plug now. I personally like grilling bacon because of the amount I can cook at once and how it keeps the mess and odor, which can linger for days in a kitchen, safely outdoors. 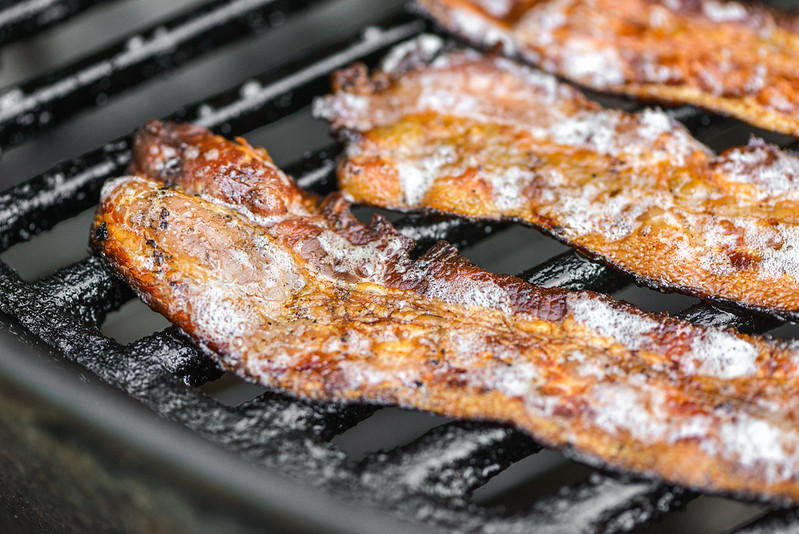 To grill bacon, just make a three-zone fire with the coals situated in two piles on either side of the charcoal grate—I also use a two-zone fire often, it just requires a little more flipping and attention for even cooking. Then place the bacon over the cool area of the grill, cover, and let cook until the fat renders, crisping and browning the bacon slices. 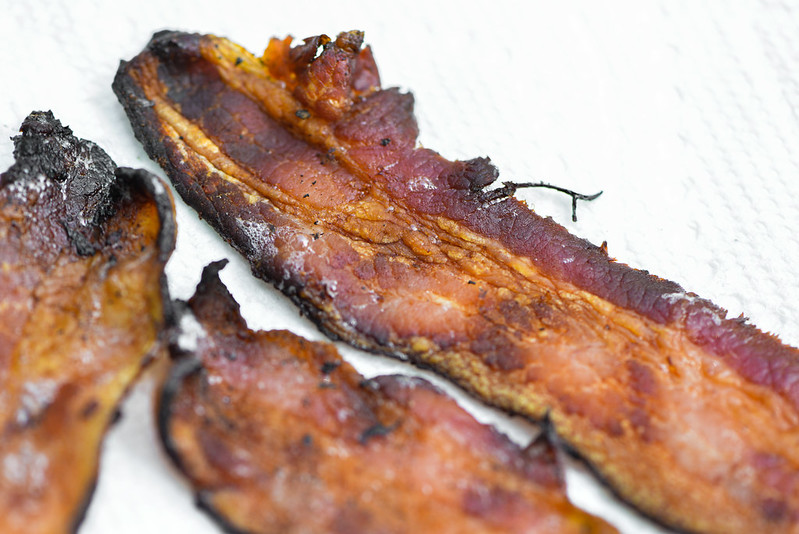 The end result will be crunchy strips without the mess, smell, and hassle that a stovetop method usually comes with. As for the flavor of this particular bacon, it was pretty awesome. I got that mainly meaty, smoky, and salty flavor to makes bacon bacon, but the spices definitely added a little extra touch that was hard to put my finger on in the end product, but made it taste more robust than what you get at the supermarket. I'm happy I have a few more bags of this stuff sitting in the freezer because this bacon can certainly find a home in most any use.