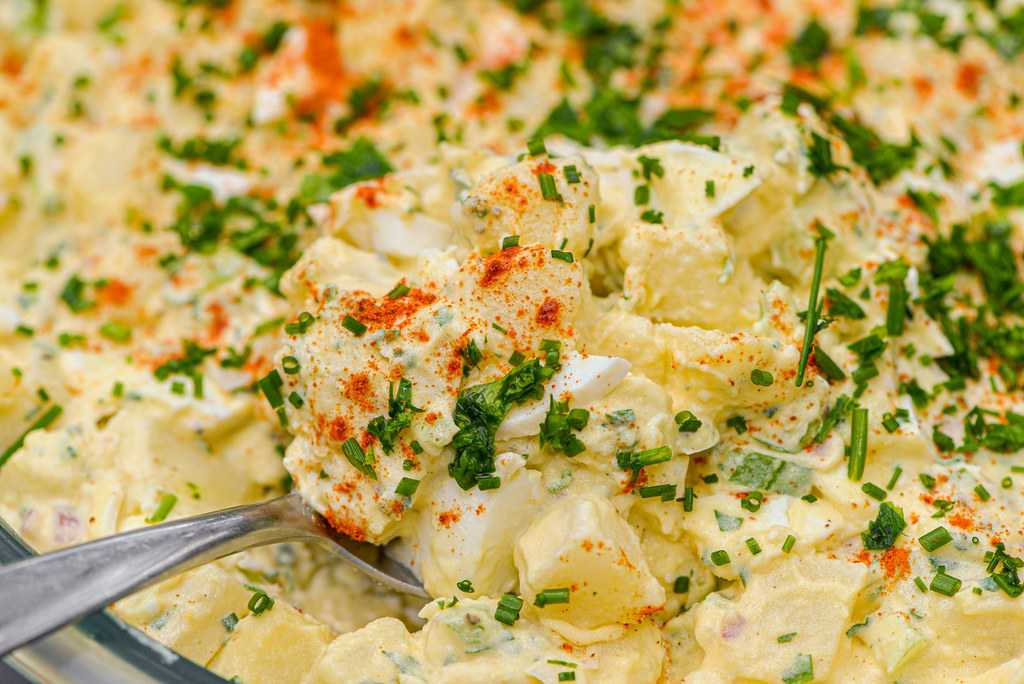 The first thing I ever tasted at The Spotted Pig were the deviled eggs, which was around the time the West Village spot started to become very buzzy, and well before the public was aware of all the awfulness that was happening behind the scenes. Those were the best deviled eggs I had ever had and they set a high bar for the rest of the meal, which just got more delicious with the gnudi and burger that followed. My fondness for those particular deviled eggs never ceased, so when April Bloomfield published a recipe for them that was close to the original, I pretty much have just used that recipe exclusively since. Sometimes I make some alterations to give the eggs a tilt to fit into meal better, but I never really thought of using that recipe as a base for a different dish until I was deciding on what type of potato salad I wanted to serve at a Meatwave earlier this year and landed on a deviled egg potato salad. 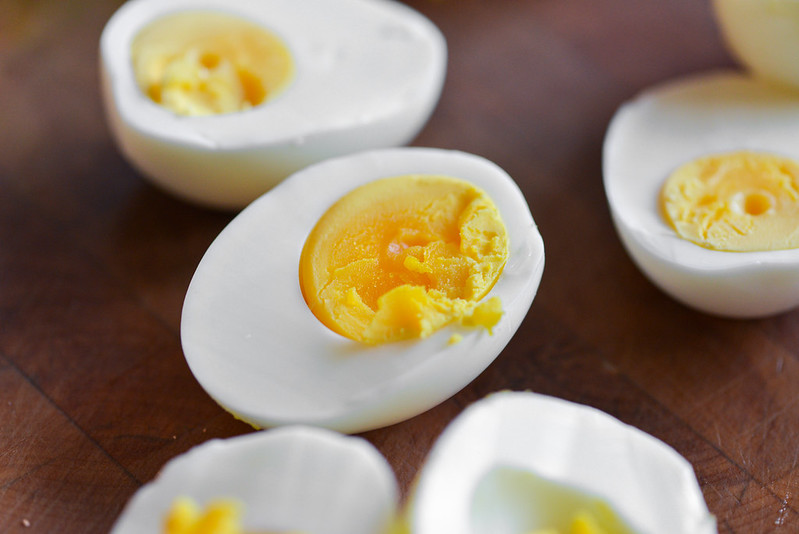 I was expecting a large crowd, so this recipe is scaled to feed around 15 folks minimum, and definitely more if there are other sides as well. That required me to start with a full dozen eggs that I hard boiled using the method Kenji wrote up on Serious Eats many, many years ago that first cooks the eggs in rapidly boiling water for 30 seconds, then 11 more minutes in simmering water. I know he's released an improved recipe on the New York Times that trades boiling for steaming, but this method is now second nature and has never failed me, so I really don't have much motivation to change. 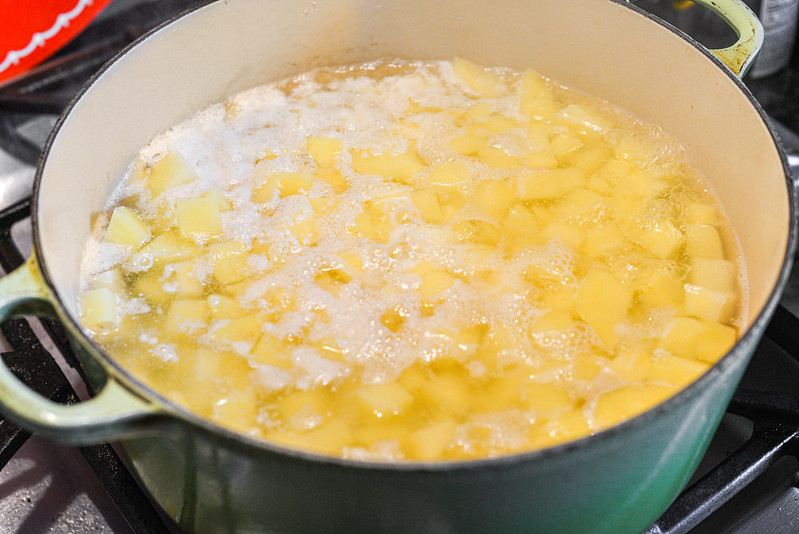 For the spuds, I went with five pounds of Yukon golds, going for a waxy potato since they retain their shape better in salads than starchy varieties that fall apart during the mixing stage. To cook the potatoes, I started them in cold water with a few tablespoons of salt added in. Once the water got to a boil, I turned the heat down to maintain a simmer, and cooked the taters until they were completely tender when pierced with a pairing knife. I then drained them and let them sit to cool while I prepped the dressing and other ingredients. 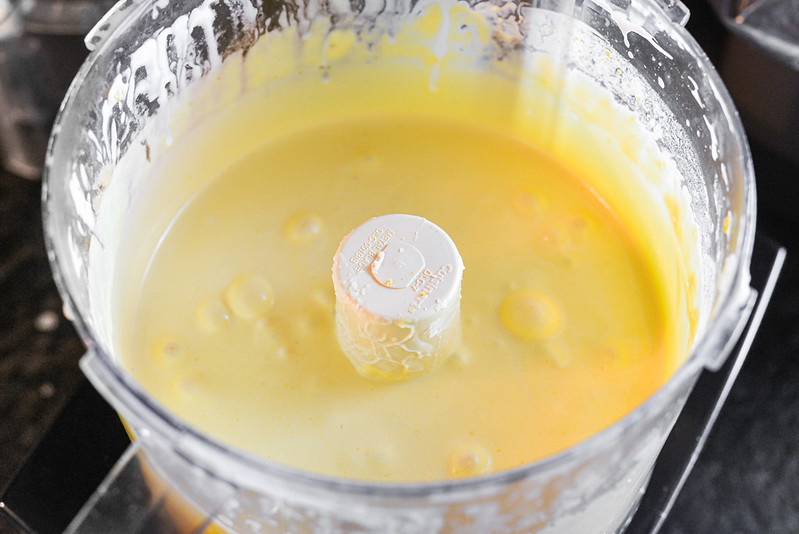 For the dressing, I pretty much started with the same exact ingredient list as the Spotted Pig deviled eggs and adjusted quantities to make the end result be more in line with a salad dressing than egg stuffing. This required a large increase in the mayo to be able to fully season five pounds of potatoes, then all the other ingredients also needed boosts to get in the full tangy flavor that I love. 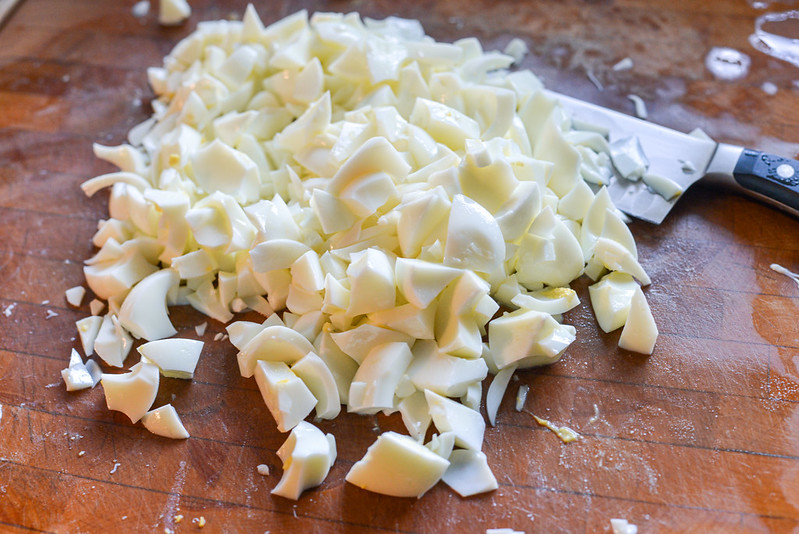 Once the dressing was done, I moved along to the other mix-ins. First, I roughly chopped the egg whites and added them in with the cooling potatoes. Then I needed to add some crunch, which I did by way of both shallots and celery. I tend to top my deviled eggs with chives, so I used those to start a herbal component, which I rounded out with parsley too. 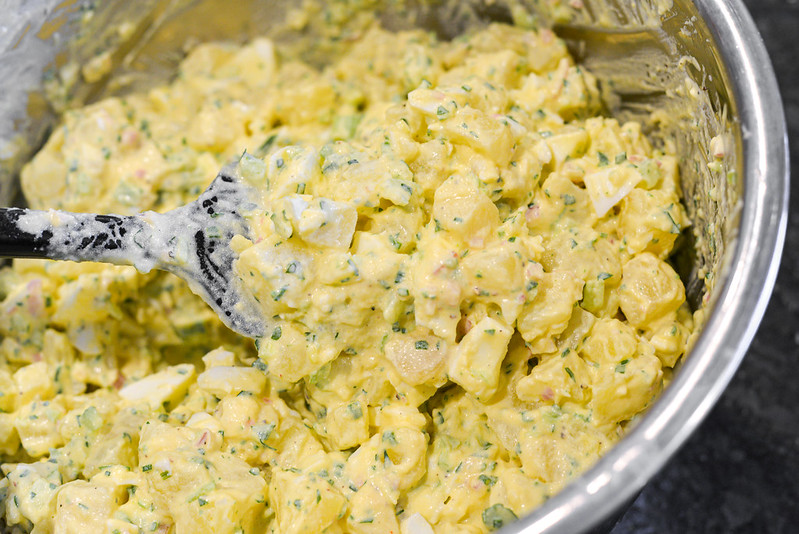 I added all these in with the potatoes and eggs, then poured on the dressing, and tossed to combine. After seasoning with salt and pepper, I was very pleased with how this really delivered that deviled egg flavor I was after, but had to wait a few hours for the salad to chill in the fridge to see if it still held up when cold too. 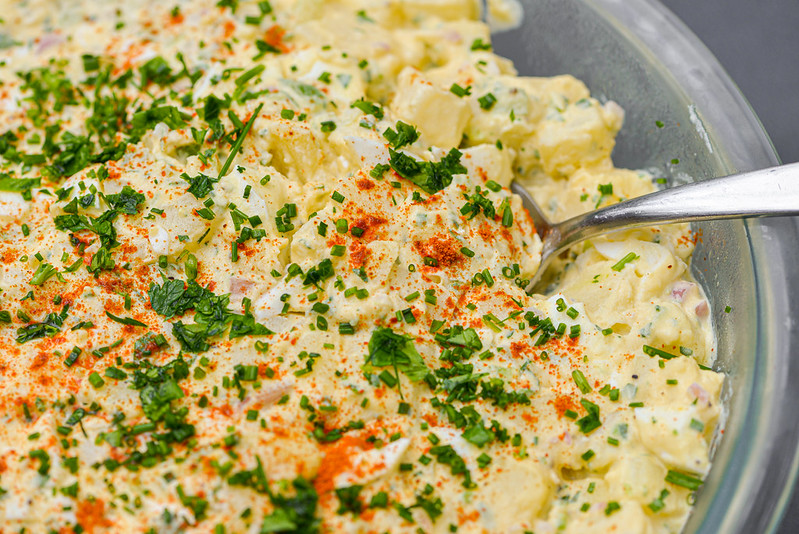 Right before serving, I added on more chives and parsley, along with a sprinkling of cayenne pepper for both color and a touch of heat. Even after being cooled completed, this potato salad was still amazing. It stayed nice and creamy, which was the first win, but the bigger accomplishment for me was getting that unique tang of the Spotted Pig deviled eggs into each bite of the salad. The upping of the mayo did make it a little more subdued in comparison, but that combo of champagne vinegar, creme fraiche, and Dijon mustard would have been too strong if they weren't scaled back for adaptation into salad form. Commenters have had some qualms with my general under usage of mix-ins in pasta and potato salads, but I think I struck a good balance in this recipe that I believe most all will be happy with as originally written since the celery and shallots were well accounted for throughout and there was enough herbs to add fresh and oniony notes without them overpowering the the star dressing. Just like those Spotted Pig deviled eggs are a favorite of mine, I think this recipe may become my preferred potato salad that I go to more often than not. 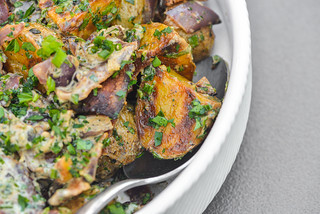 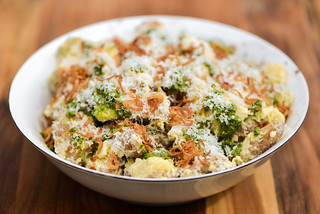 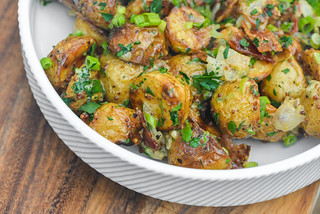