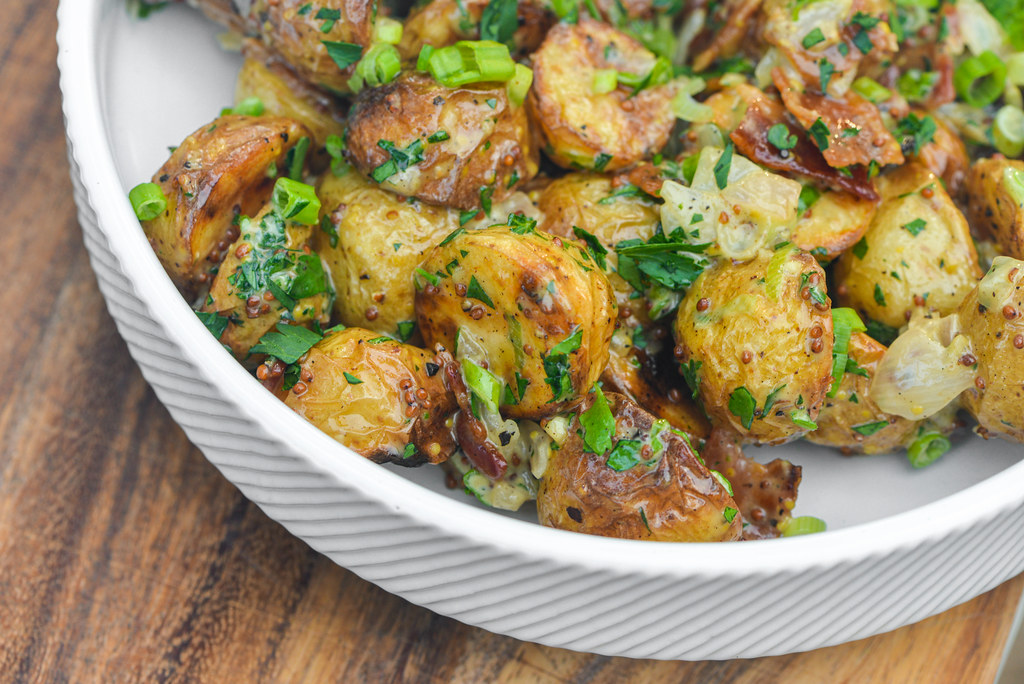 Growing up, I lumped potato salad, macaroni salad, and coleslaw into a bucket of somewhat bland items whose primary purpose was mayo delivery. I was really only exposed to the stuff at local diners, which never did them justice and left me with a negative impression until I started learning how to cook on my own. Among the recipes I tried out when getting my feet wet with grilling was a fire-roasted potato salad from a Weber cookbook and it rendered me dumbfounded that this common side could be way more than my narrow experience with the dish, and a million times more delicious. I didn't look back from there, and have developed a ton of potato salad—along with macaroni salad and coleslaw—recipes over the years that I'm proud of, and you can add this grilled potato salad with a whole grain mustard dressing to that ever expanding list. 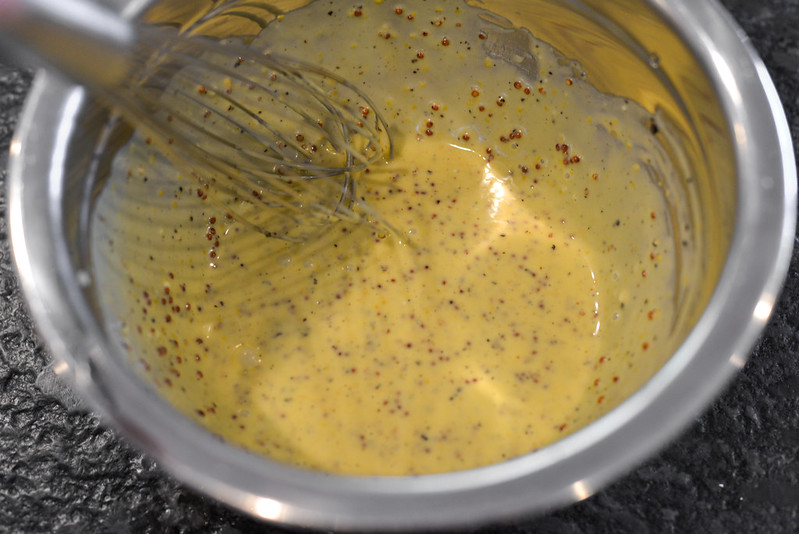 I was actually thinking about that first perception-altering potato salad when coming up with this recipe, and the two bear a lot of resemblances to each other in method and ingredients. One thing that is decidedly different is the dressing—where that Weber recipe used a sherry vinaigrette, I went with a more boldly flavored approach here using a double dose of Dijon mustard with whole grain and smooth varieties. Olive oil and some mayo served as the base for those mustards, whose sharpness and pungency was tempered a bit by the addition of honey. 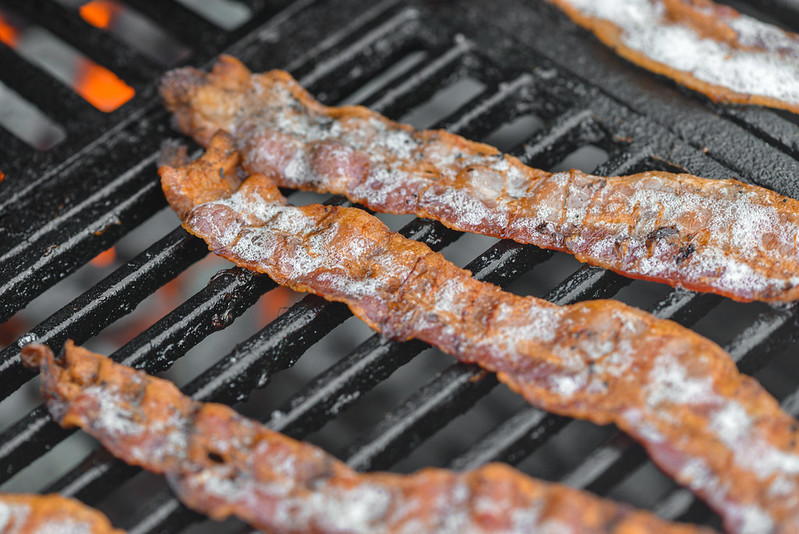 If you've ever had German potato salad, you know bacon is a welcome and fitting addition. I was planning on grilling up some bacon already for use on sandwiches, so just tossed extra slice on the grill that I could break up and use in the salad as well to add some saltiness and meaty heft to the final dish. 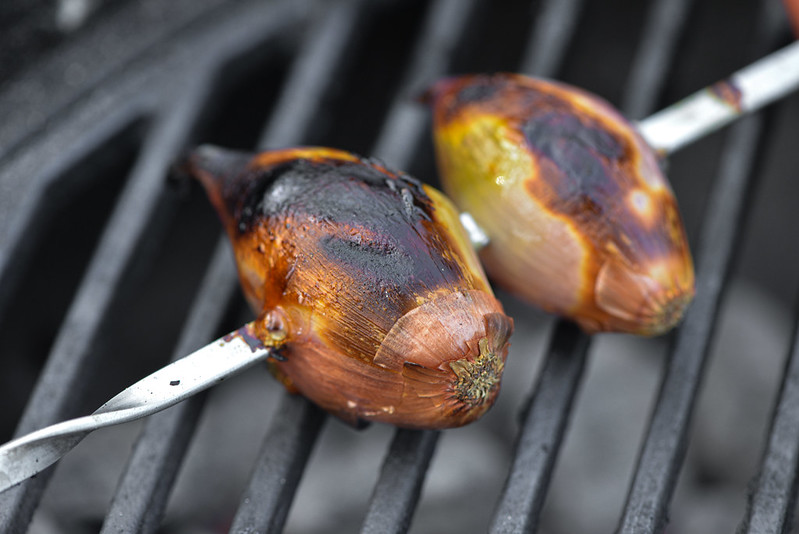 Also part of the grilled mix-ins were shallots. Last summer was the first time I cooked shallots whole, in their peels, when putting together the Thai chili dip nam prik noom and realized this simple process could have a lot of good applications. I skewered the shallots to make the easier to manage on the grill, and once they were charred and sufficiently softened, I let them cool, peeled, and roughly chopped them for use in the salad. 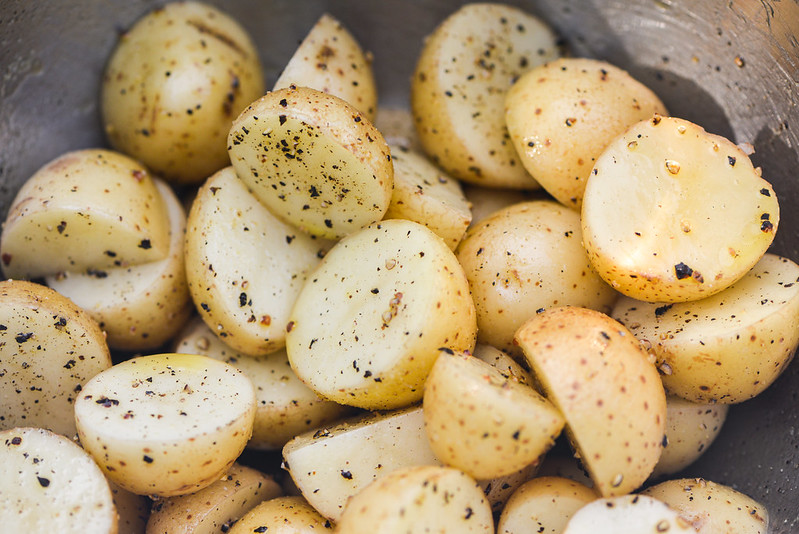 My spuds of choice were Yukon Golds for this salad, thinking their light sweetness and creamy texture would be a good matchup for the mustard dressing I had devised. I used the small variety of potatoes, so to prep them for grilling I just had to halve them, then give them a tossing with oil, salt, and pepper. You could use the larger variety as well and come out with the same results, you just have to cut them into roughly one-inch chunks. 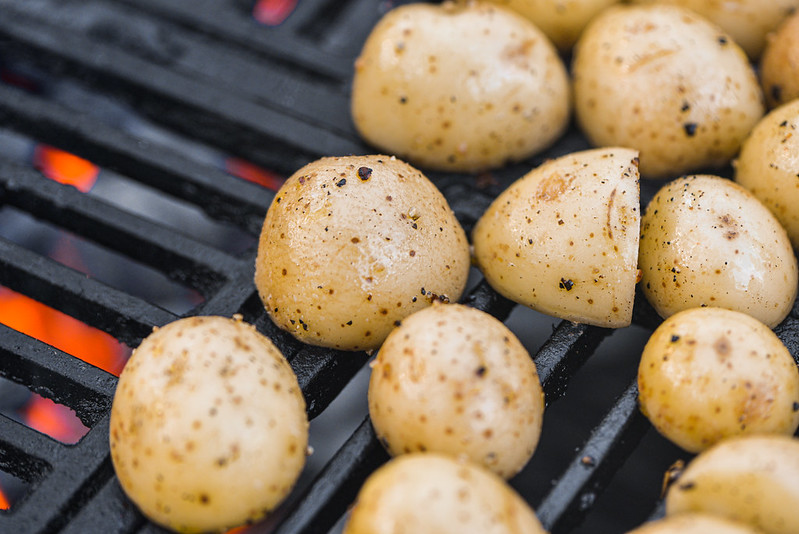 I've found through testing that for the best texture and flavor, there really is no substitute to roasting spuds from start to finish—par-boiling and microwaving are effective shortcuts, but with a bit of a diminishment in the end result. Another advantage to Yukon Golds is cooking time—I often have to cook standard russets a good 30 to 40 minutes to get them tender throughout, but these little Yukon Golds took about half that time. 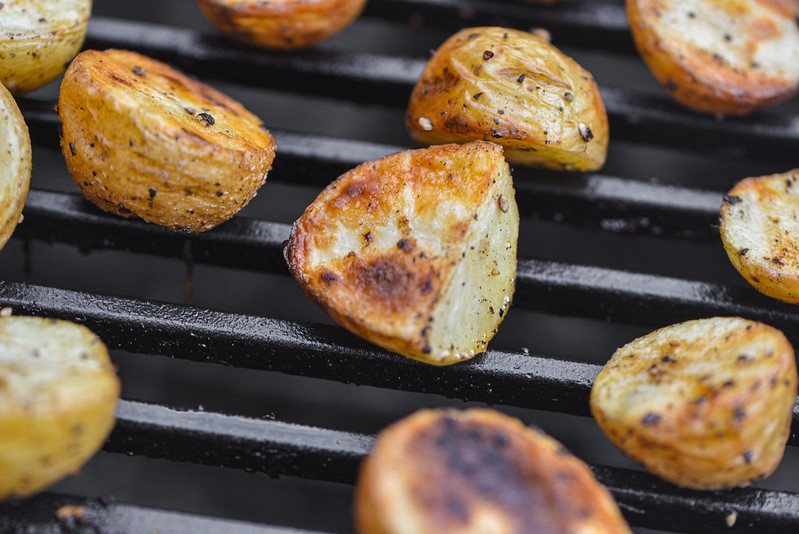 I like to cook them close to, but not directly over, the coals using a two zone fire. I find they both cook faster and brown really well in the process with this positioning. Some of the spuds not as close to the fire may not be browned by the time they're tender, but with most exterior moisture now gone, they'll turn golden in seconds if you just move them to direct heat right at the end of cooking. 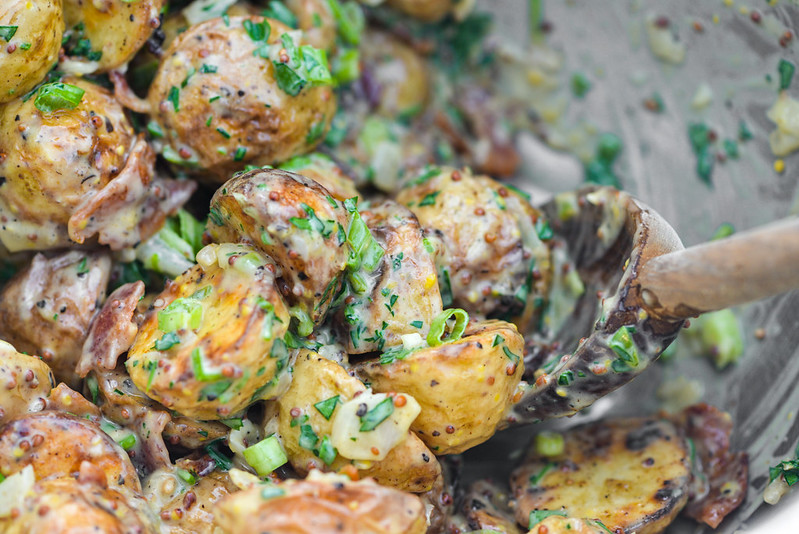 With the taters done, I put them in a large bowl and added in the rest of the salad components—bacon, shallots, scallions, parsley, and the dressing. I then tossed everything together gently, being careful not to break the potatoes apart—another plus of Yukons here is they hold their shape better than russets in this scenario. 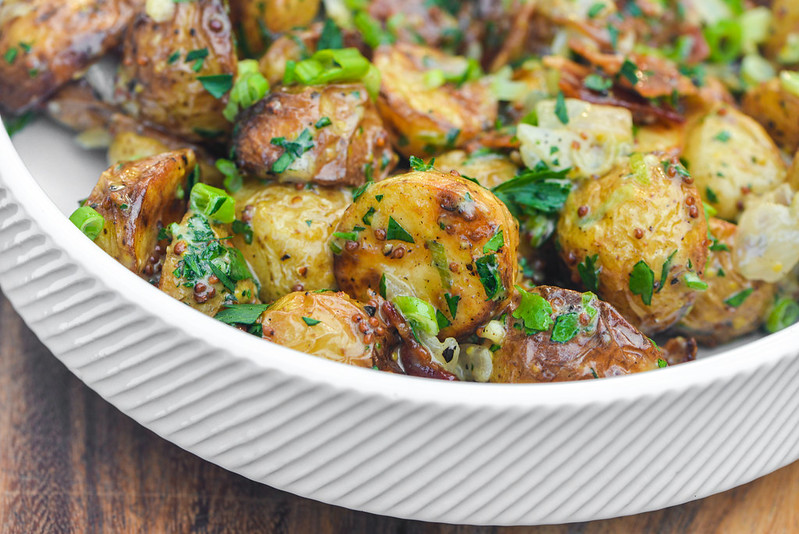 And with that, I had yet another potato salad hit on my hands. Like that first salad that turned me on to everything a potato salad could be, this one had an amazing array of flavors and textures and was a far cry from the one-note mayo-laden versions I grew up with. The potatoes themselves started things off on the right foot with a great grilled flavor and crisp-tender exteriors that gave way to creamy innards. It was a great pairing with the bite and light sweetness of the dressing whose whole grain mustard added another pleasing textural component. Bacon certainly tasted like a very fitting addition to the heavy hitting flavors going on, while the cooked shallots and fresh scallions added two contrasting and important oniony notes. I enjoyed this salad warm, but had some leftovers that tasted great the next day as a cold salad as well, so there was some added versatility to the recipe I originally wasn't considering when planning it out. There's so much a potato salad can be that I don't think I'll ever tire of coming up with new variations like this one.