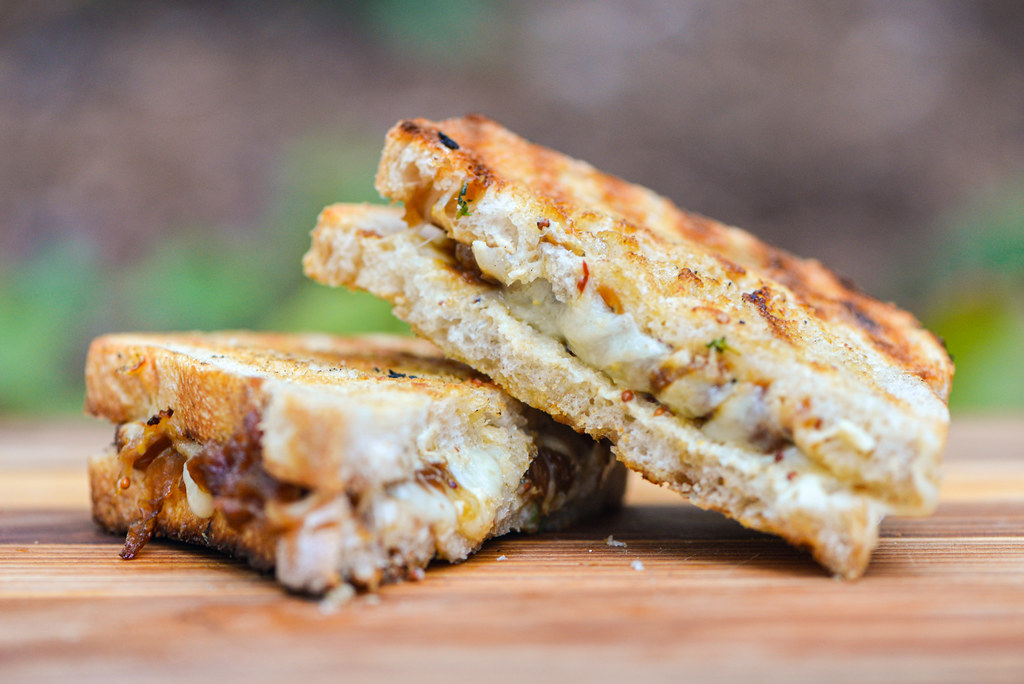 I love caramelized onions, like a lot. I take any opportunity to make them and I usually push mine to be as dark brown and sweet as possible, which might take them over a sugary edge for some folks, but not for me. Although I don't mind the time it takes to make caramelized onions, the process can be lengthy, so I often make extra and freeze them to have a reserve on hand to pull out on those days I don't feel like sitting by the stove for 30-plus minutes. When I decided to have a grilled cheese party with some friends last fall, I remembered I still had one bag of these onions in the freezer and thought the theme lent itself well to using them in a sandwich, and what better pairing is there than salty and slightly sharp flavor of gruyere cheese, which made some damn tasty French onion grilled cheese sandwiches. 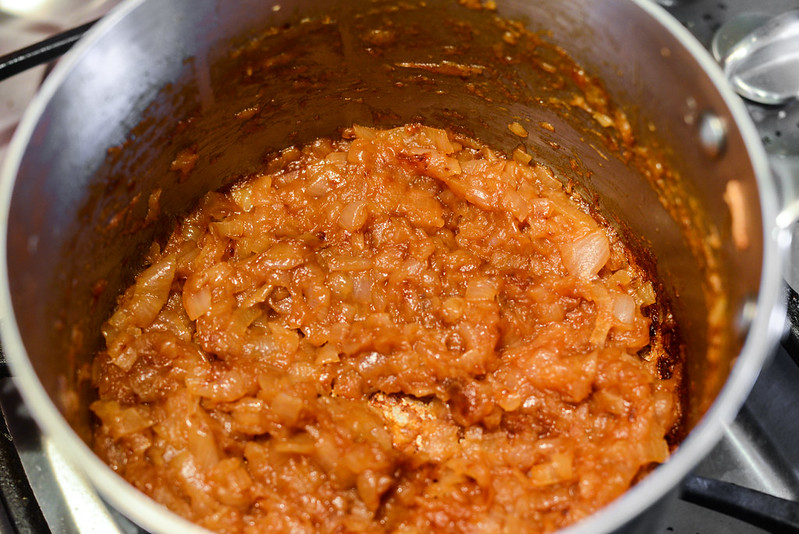 As I mentioned, the onions for these sandwiches came out of the freezer, so this photo is from a previous caramelized onion making session. I've tried so many tricks to speed up the cooking over the years, but nothing compares to just ensuring you have 30 to 60 minutes to make them the traditional way. At the start of making these, the onions almost filled the entire pot, but over a medium heat, they slowly lost their moisture and reduced greatly. Once they were reduced down, that's when dark fond began to form on the bottom of the pan, and from here on out it was matter of deglazing the pan and waiting for the fond to form over and over again until they were deeply browned. If you're not a fan of them beings overtly sugary, you can choose to not deglaze the pan as often and stop cooking them when they reach your desired color and flavor. 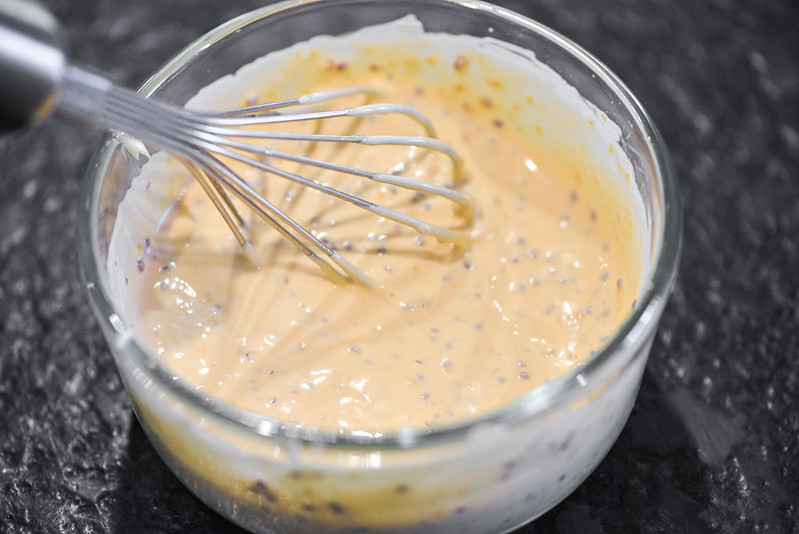 I'm sure the onions and cheese alone would have made a mighty fine sandwich, but I had already made a Dijon mayonnaise sauce for a tart apple grilled cheese, and gave it double duty by using it for these sandwiches too. The sauce was quick to put together, but had a ton of depth thanks to using both smooth and whole grain mustards and adding soy sauce to create an underlaying savoriness. 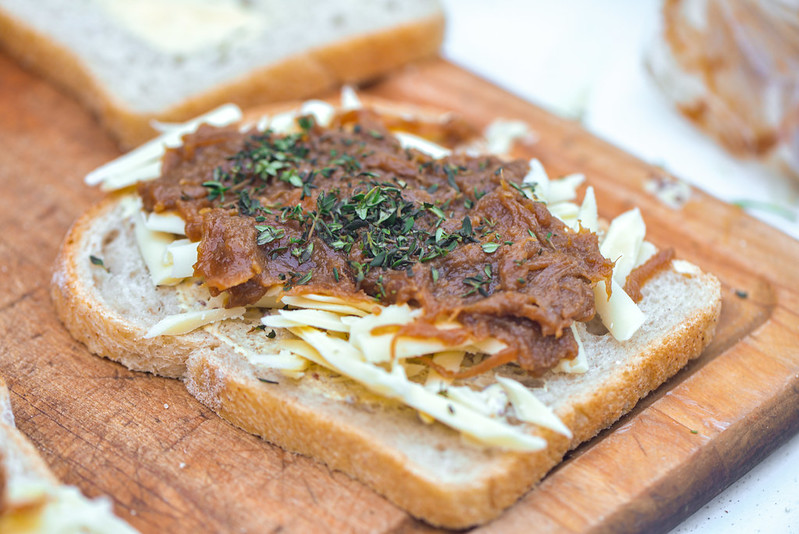 To assemble the sandwiches, I began by buttering one side of each slice of sourdough bread. Then on the opposite side, I spread a healthy portion of the sauce on one slice of bread and piled on some gruyere followed by caramelized onions and a sprinkling of thyme, then topped with the remaining slice. 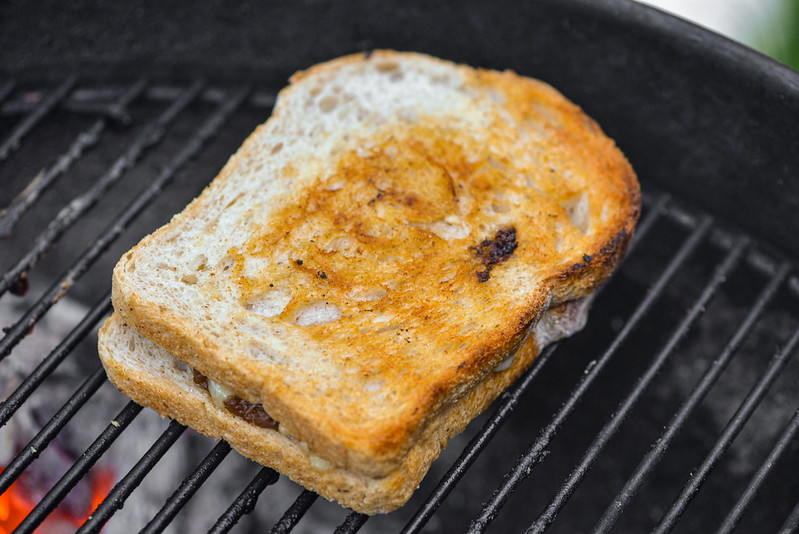 Next the sandwiches went on the grill, situated on the cool side of a two-zone fire. Unlike when cooking grilled cheese on the stove, where you use direct heat the entire time, I like to first roast my sandwiches on the grill until the cheese is melted. This is due to the more unpredictable qualities and intense heat of a charcoal fire which can easily render the bread burnt to a crisp before the cheese gets a chance to melt. 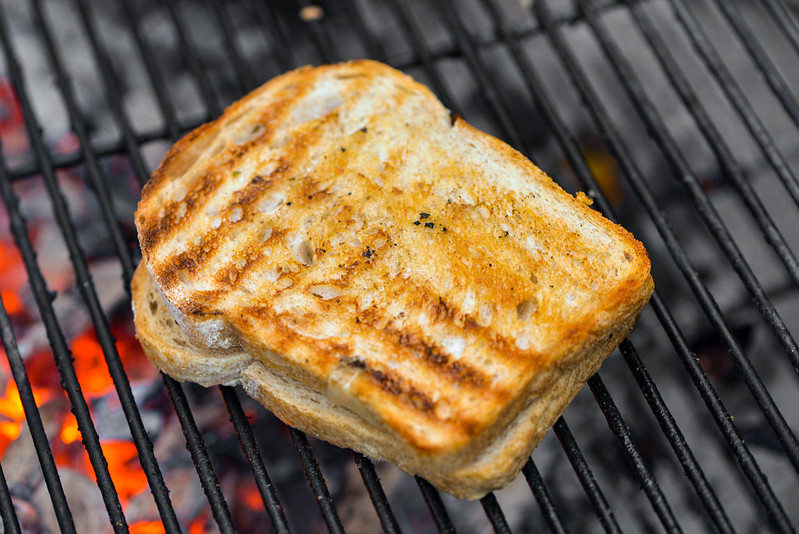 With indirect heat, though, the bread is not always sufficiently golden brown, so once the cheese is melted, that's when I'll move the sandwiches over to the direct heat and let them cook until the develop a beautiful dark brown hue. Because the bread is already pretty dried out at this point, the toasting happens very quickly, so I flip often and never step away during this step to try to keep them browned, but not burnt. 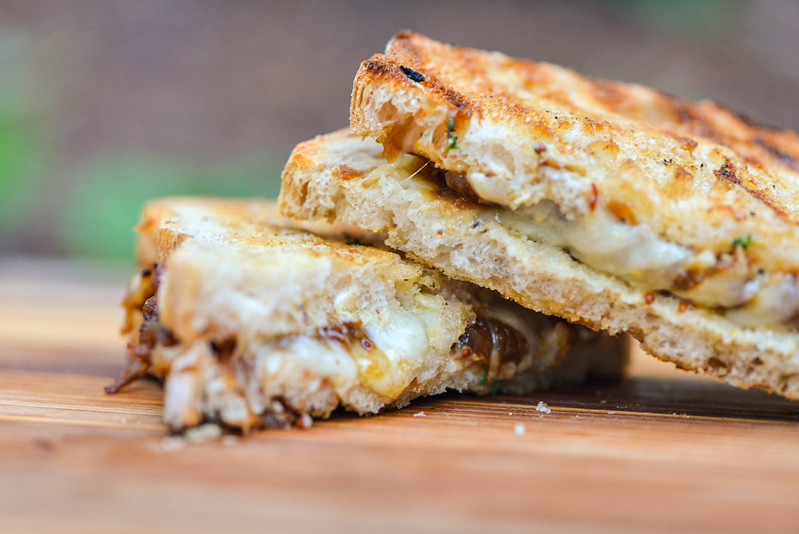 If there were ever a grilled cheese made specifically for me, it might just be this one. The deep sweetness of the onions was front and center, but it was tempered well by the creamy cheese that also provided a contrasting sharpness that was given the extra boost thanks to the Dijon-bases sauce. I'm most familiar with this flavor combo in French onion soup form, but the soup soaked bread in that scenario is swapped here for the great crackling crunch of the sourdough, whose light tang was a welcomed flavor addition. After making these grilled cheeses though, I was left with no caramelized onions on hand any more, so it was only a couple weeks later that I was already cooking up a new batch again. 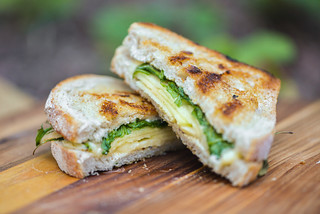