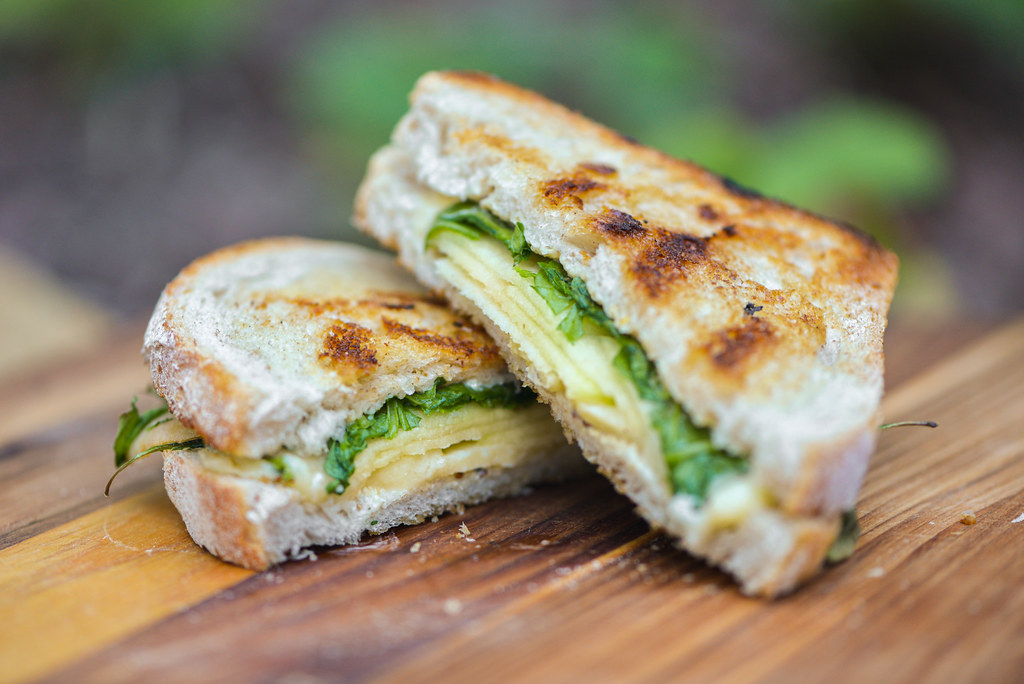 This time five years ago I was hosting my last Meatwave of the 2015 season, which was notable for many reasons—it was the finale in my new locale of Durham, I was feeling good about already developing a healthy Meatwave constituency in the few months since moving, and it marked a beginning of me adding more meatless offerings as my vegetarian crew was growing. On that last point, I had made a fitting fall grilled cheese that featured sharp cheddar and tart granny smith apples which tasted great, but the photos turned out miserably, which meant the sandwich never made it onto the site. I finally got around to remaking this grilled cheese, with some important improvements, and am happy to finally be able to share it with all of you! 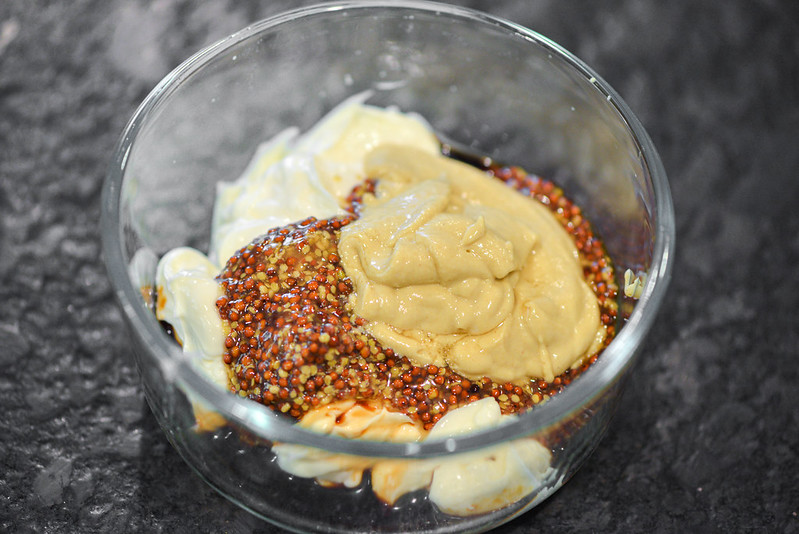 The original incarnation of this grilled cheese had just white cheddar and apples, which ended up being an apt pairing, but there was certainly room for improvement. I saw an opening to make this even better by adding a sauce, and Dijon felt like the right sharp companion to come through against the flavorful cheese and apples. I didn't want things to taste overly pungent though, so I put together a Dijonnaise, cutting the mustard with creamy mayo. I took things a bit further though and added in whole grain Dijon too for a textural boost, soy sauce for savoriness, and lemon juice for brightness. 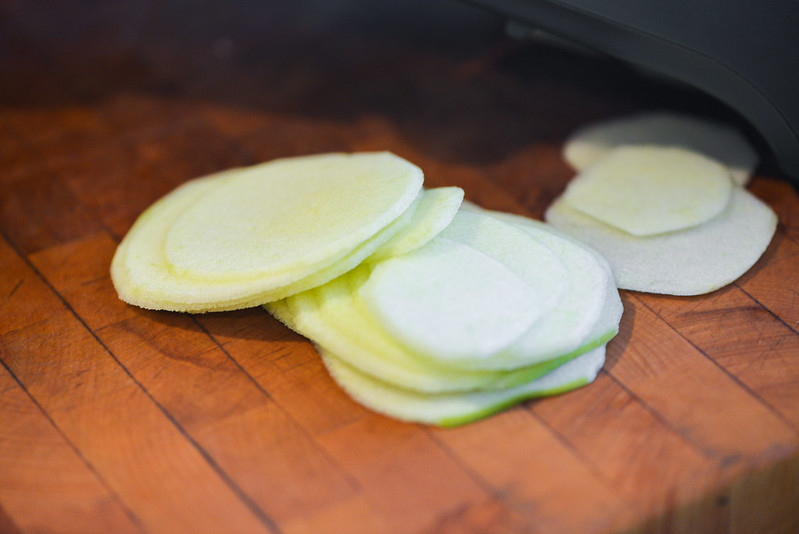 The Granny Smith's were perfect for the grilled cheese, retaining their crunch and tartness against the cheddar. So I kept that element and prepped them the same way I did before, which had me slicing them pretty thin on a mandoline after peeling, then letting the apple slices sit in salt water for a few minutes to prevent them from browning. This insurance against discoloration also let me comfortable prep the apples well in advance of cooking knowing they'd still look great in the final sandwich. 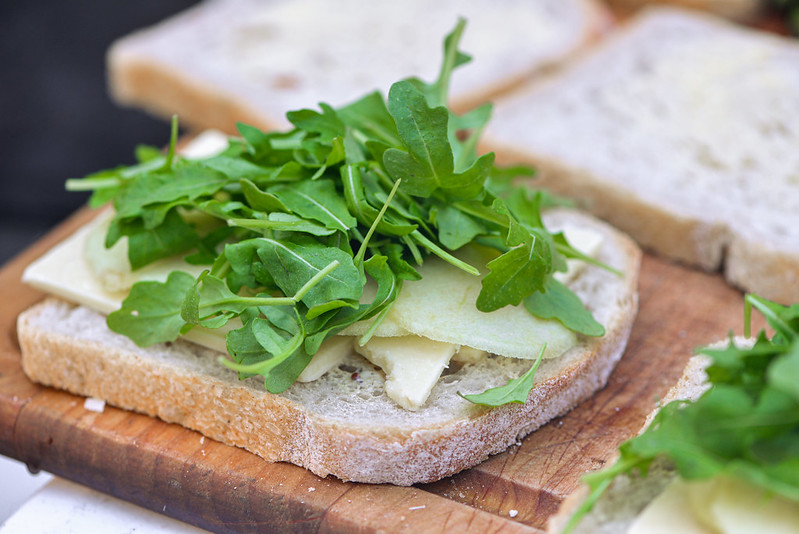 To assemble the sandwiches, I started with buttering two slices of a sourdough bread, then spreading the Dijon sauce on the opposite sides. Next, I piled on slices of sharp white cheddar, the apples, and a small handful of arugula. The arugula was the other new addition, giving the grilled cheese a boost of missing color plus a pepperiness that I assumed would work well against all the other flavors going on. 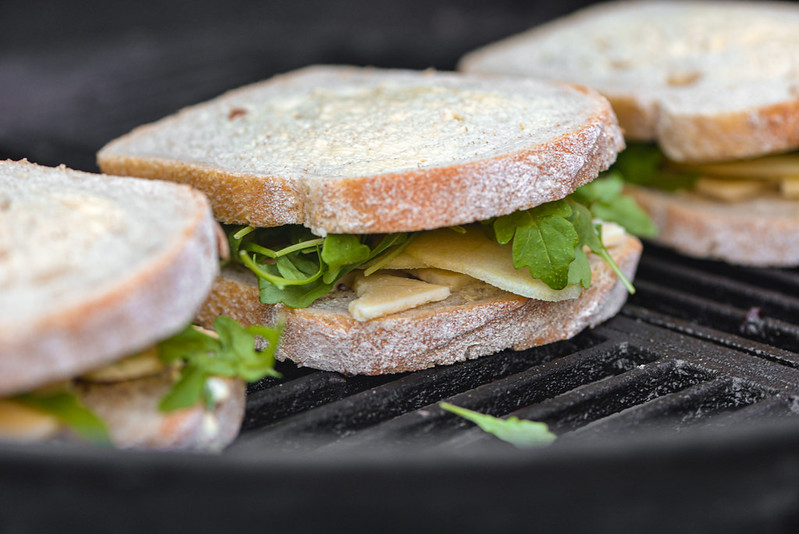 To cook these on the grill, I situated them on the cool side of a two-zone fire, where all the coals were arranged on one side of the charcoal grate. I then covered and let the sandwiches cook until the bread crisped, the cheese melted, and I started to see some browning. For even cooking, I ended up flipping these a little more than halfway through cooking, after the cheese began melting to help ensure the sandwiches would hold together well when handling them. 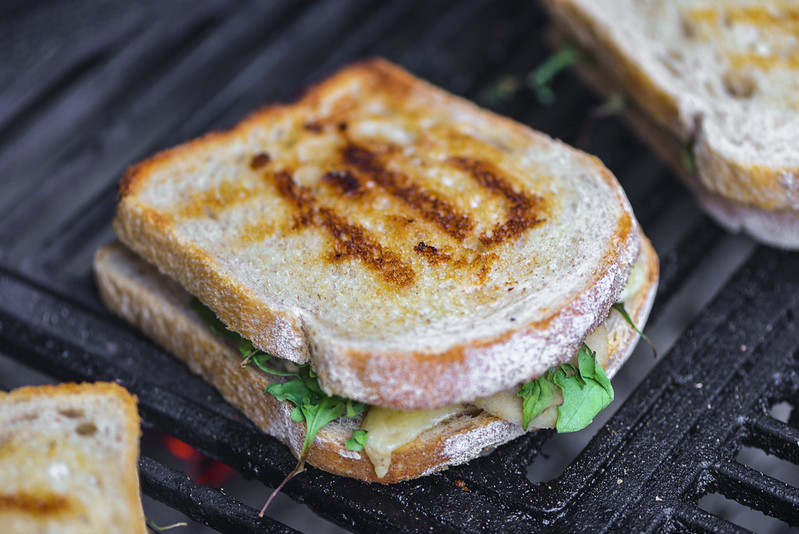 Once done, the bread needed a little more color for my liking, so I moved the sandwiches over to the hot side of the grill and browned them more deeply. Since the bread is already fairly dry at this point, it can go from brown to blackened incredibly quickly, so I was vigilant in watching and flipping them often. Even so, I still ended up with some blackened bits here and there, but that's all part of cooking with a live fire in my mind. 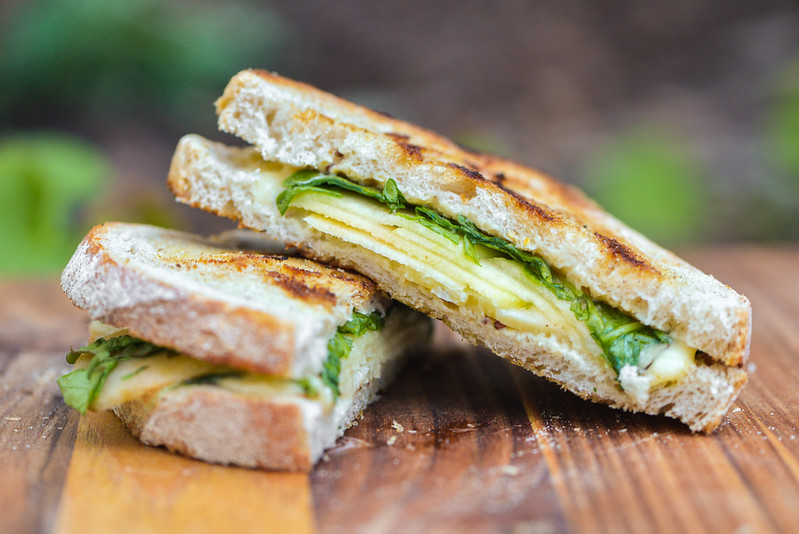 It's probably a good thing those snaps of the initial sandwich five years ago didn't turn out because this incarnation was much improved upon. The foundation was still that sharpness of the cheddar and tartness and crunch of the apples, but the sauce did a lot to add depth and a complimentary bite to the party. The arugula definitely made the grilled cheese more photogenic, but you also got the bonus of a light peppery character too. I think the original sandwiches of five years ago were done on regular sandwich bread, because I don't remember the sourness of the enclosing vessel being notable the way it was here, which had a great crunch and buttery richness too—all icing on the cake. I also was able to enjoy these with my close friends that were a driving force in getting me and the wife to move to the area, which was a nice finishing touch to the long journey of these simple, but delicious, cheddar and apple grilled cheese sandwiches. 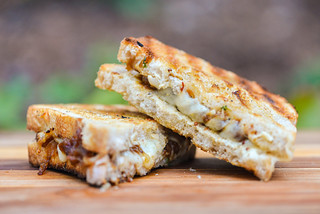