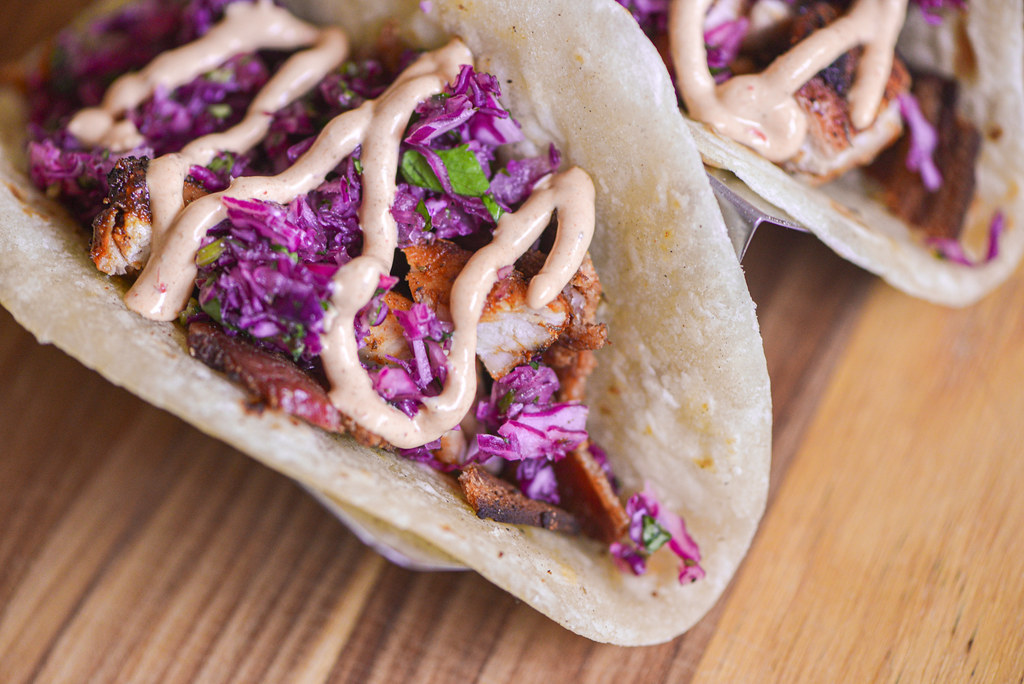 Like with the pastrami bacon that had come before, once I had a batch of garlicky and spicy Cajun bacon, I was left considering what to pair this uniquely flavored cured pork belly with. I've already done so many recipes this bacon would have been perfect for, like blackened burgers and blackened chicken sandwiches, but I wanted to cook something I could use for a new recipe for the site, so got to thinking. I didn't venture far off those previous courses and wound up making blackened chicken tacos, which I thought would essentially taste like the sandwiches in taco form, but they turned out to be something truly distinct. 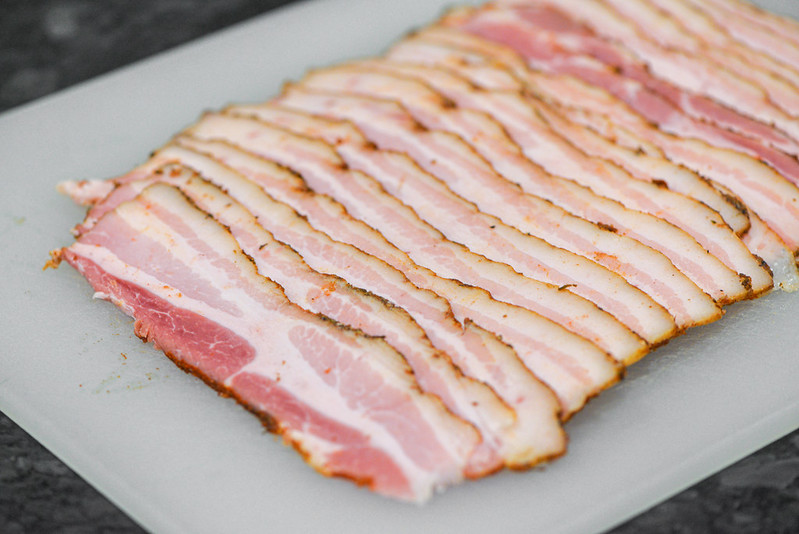 If you want to go all in on this recipe and recreate just as I made it, I have full documentation on how to make the Cajun bacon at home. While that bacon was incredibly well suited in this situation, it is by no means necessary since, in the end, the bacon really served to add a saltiness, smokiness, and crunch and the chicken was enough to add that Cajun/blackened taste on its own. The one concrete recommendation I do have on bacon selection is to go with thick cut—I found the thicker slices apt to hold their own against the heavily spiced chicken. 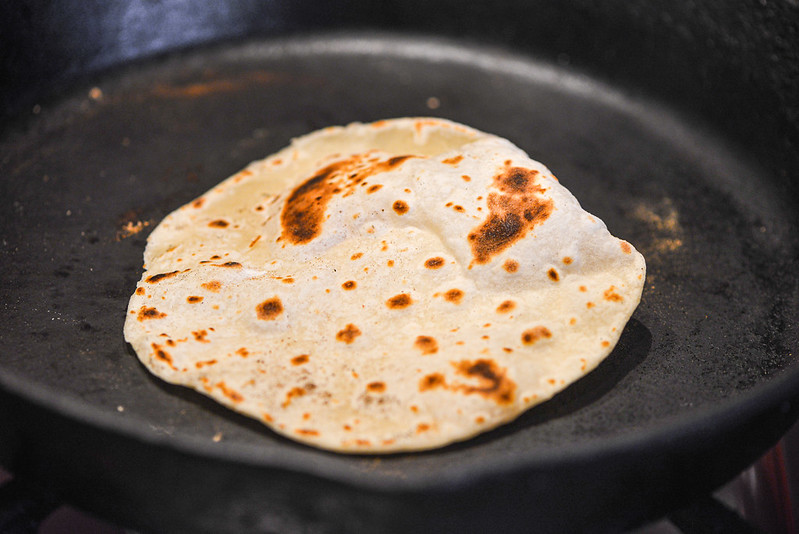 If you continue on to wanting the exact taco experience I had, you can also choose to make your own flour tortillas. This is also not a necessity and I didn't include tortilla directions in the final recipe, but I think this is well worth the effort, more so than making your own bacon. Flour tortillas are a favorite of mine and I'll take any excuse to make them, which is the primary reason why I chose them over corn tortillas here. My preference is for the thin and tender Houston-style tortillas that are laden with lard, but the puffier, more common style you can pick up anywhere would be great in this recipe too. 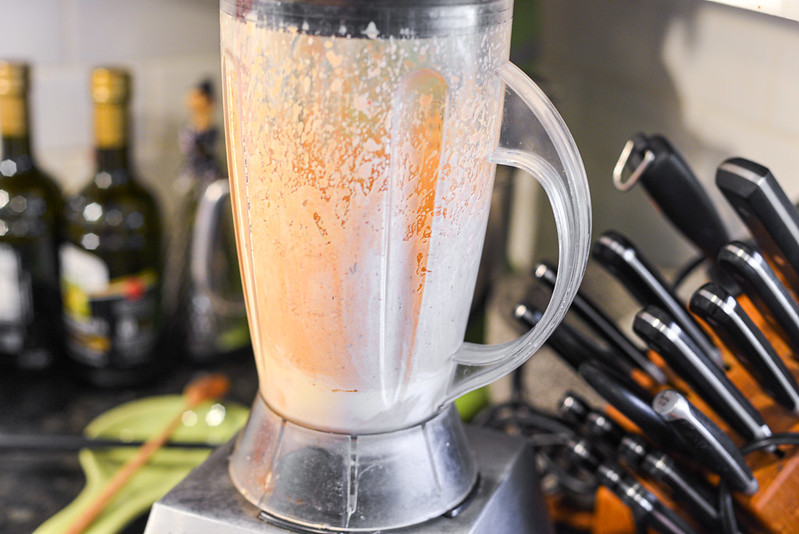 Chipotle mayo has fallen off my radar in recent years, but I resurrected it to make some mighty tasty meatloaf paninis recently and remembered why it was once a condiment king. That smoky, spicy, and tangy flavor of chipotle mayo seemed like it would find another good home in these tacos, so I whipped up another batch of it. A remoulade was also in contention as a sauce here, and I imagine that would work just as well, but it is deeper on ingredients and represents a slight bump in overall effort. 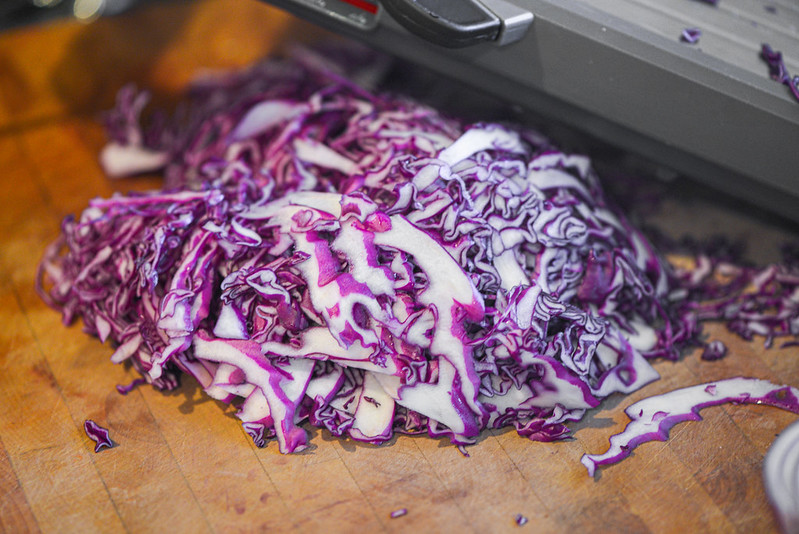 Before I set out on any recipe, I do some comparative research for inspiration, ideas, and to try to find ways recipes may be improved. Blackened chicken tacos are definitely a thing people have explored before, but almost all the recipes I saw called for a pineapple pico as the primary topper. It seemed like an idea one person did and everyone ran with it, and I almost did too, but then paused and wondered if I really wanted to drown that earthy and spicy Cajun seasoning flavor in sweetness, and decided no—I wanted those traits to shine in the end tacos above all else. What I did want out of a topper was both textural and flavor enhancements more than overt contrasts and decided a red slaw would be a good choice to deliver that. 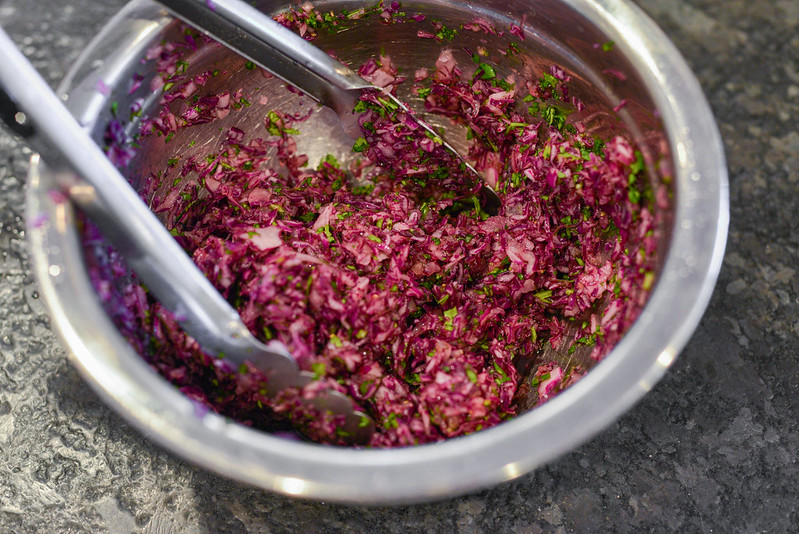 Extra-crunchy red cabbage and sharp red onions make up the base of this slaw that has a simple dressing of apple cider vinegar, sugar, and pepper. I've used a similar recipe to great success in other dishes previously that tilted to a barbecue flavor profile. In those instances I found a bit of celery seed gave the slaw an extra boost of complimentary flavor, but that didn't feel like the right pairing for these tacos, so I tried tossing in some cilantro instead and instantly the slaw picked up a much fresher flavor that tasted like it would add what otherwise could have been a missing component in the final taco. 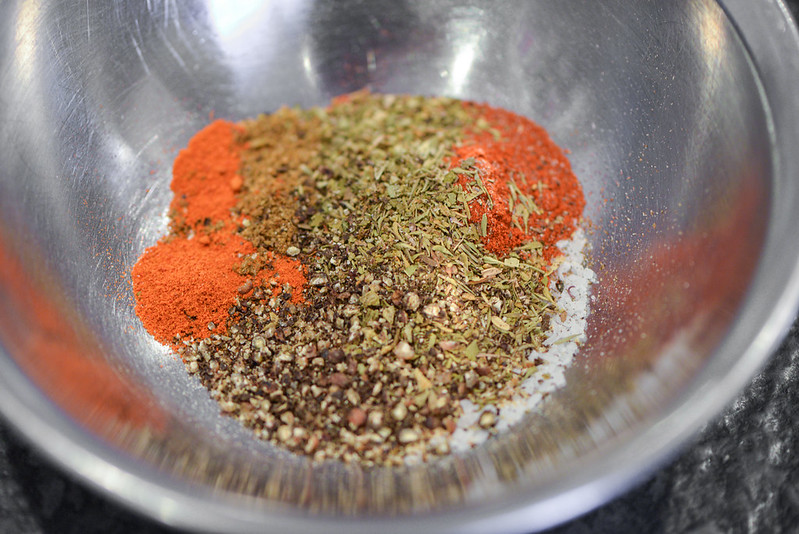 With a deep bench of recipes utilizing a Cajun seasoning, I have a tried and true spice mixture to turn to in these instances. It doesn't include all that many spices, but when paprika, garlic powder, onion powder, thyme, oregano, cumin, black pepper, and cayenne all come together, they form a sharp, spicy, and earthy union that gives anything the mixture touches a Cajun slant. 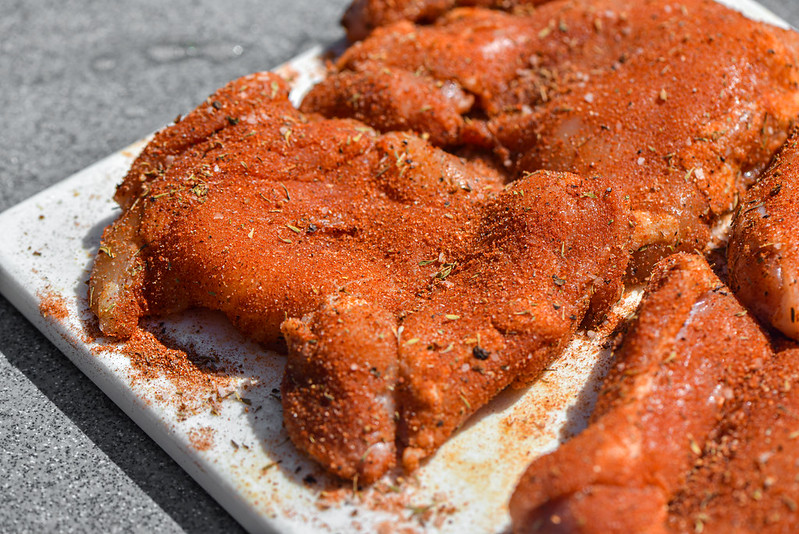 In this instance, I applied that seasoning mixture to chicken thighs in a heavy fashion. I chose thighs over breasts here for their longer cooking time and increased flavor—I wanted that seasoning to have enough time on the grill to actual blacken while still being able to taste the chicken against that heavy handed spice mixture. 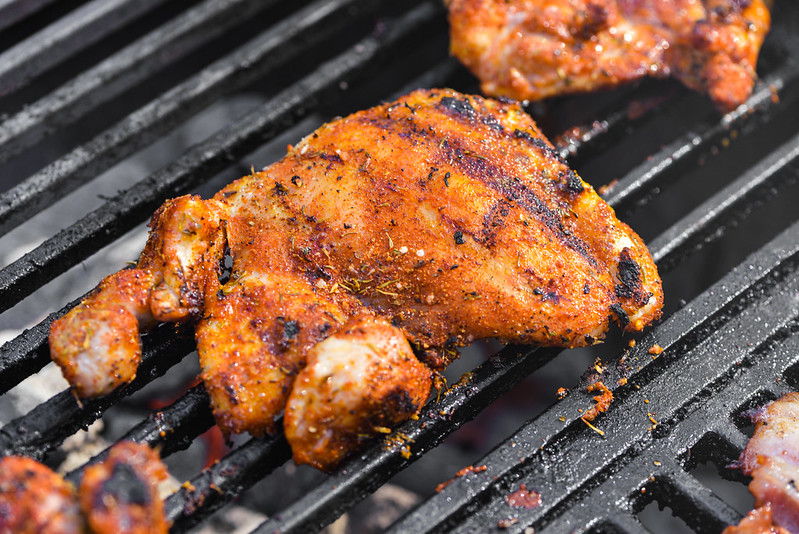 For grilling, I utilized a two-zone fire where all of the coals were arranged on one side of the charcoal grate. I then started by putting the chicken on the hot side of the grill and cooking it uncovered for maximum heat. Before the chicken hit the flames it looked a little dry and I wondered if it might benefit from a brushing of oil, but as it cooked, some fat rendered and juices were brought to the surface, which had the thighs developing a glistening quality with a still slightly dry seasoning appearance, and that was what I wanted. As each piece was finished, I transferred it to a cutting board. 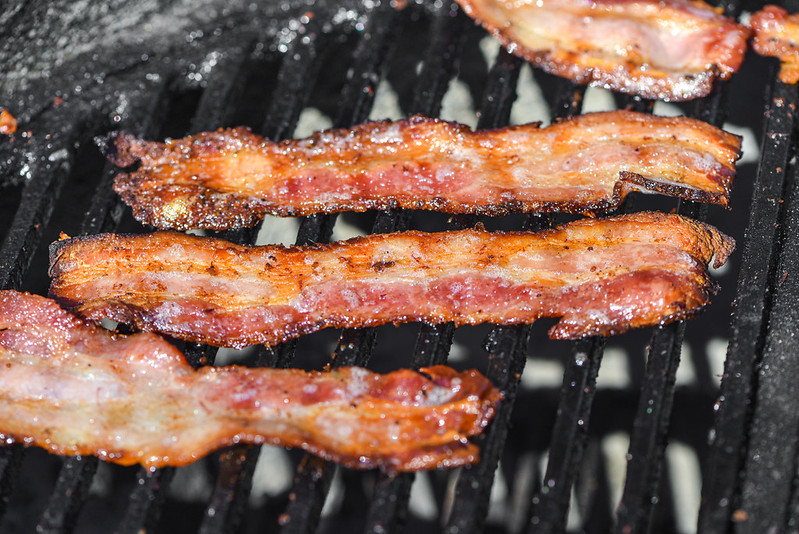 Next I laid the bacon strips on the cool side of the grill and covered. My goal was to get these strips extra crispy to keep that crunch retained in the final taco, so I let them cook, turning and flipping occasionally, until they turned a deep mahogany color. Once done, I transferred the bacon to a paper towel to allow it to drain. 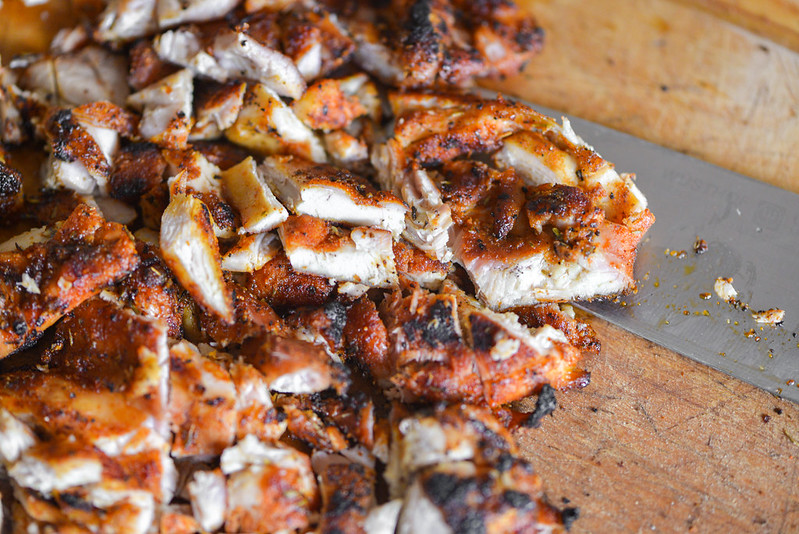 With the chicken now rested about 10 minutes, it was time to roughly chop it to turn it into a taco filling. I also roughly crumbled the bacon at the same time. 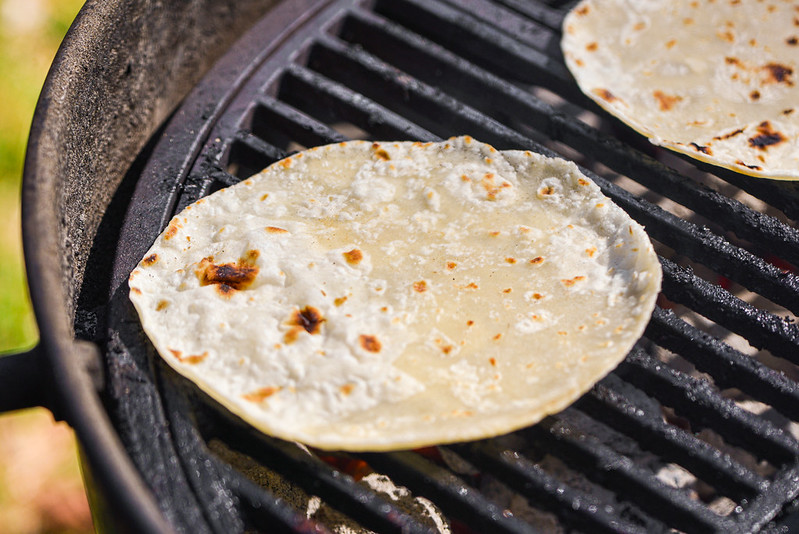 Finally, I heated up my tortillas quickly on the grill until they were hot and pliable and then assembled the tacos by filling each tortilla with a combo of chicken and bacon first, then a layer of the red slaw, and finally a squeeze of the chipotle mayo. 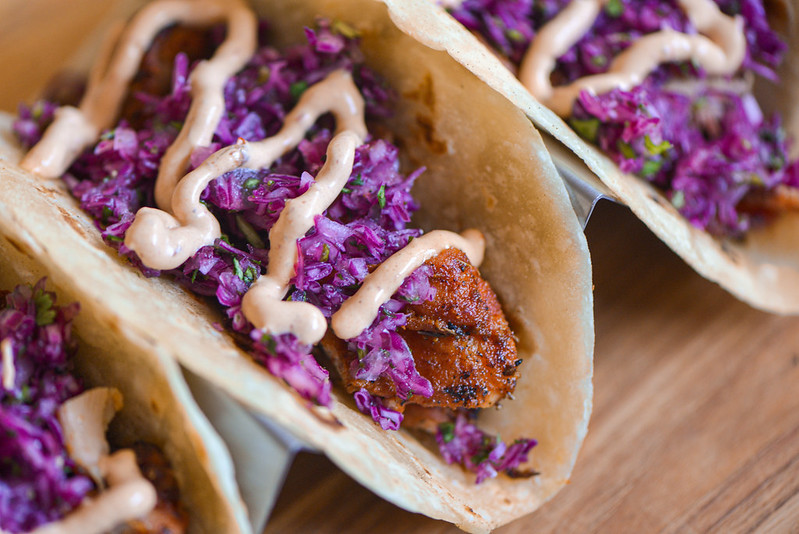 As I mentioned from the start, I was expecting this to just taste like a blackened chicken sandwich in taco form, but that's not what happened. Sure, the spicy and earthy flavor of the blackened seasoning was upfront like in a sandwich, but the way in which is melded with the crispy and salty bacon felt different, and then the experience took another turn as the slaw provided an alternative crunch, hit of freshness, and tangy contrast that helped balance out the heaviness of the main filling. The smokiness in the chipotle mayo was key in jumping the flavor up another step, then it was the tender flour tortilla that provided a lighter touch wrapper over bread that I think made all the other ingredients shine even more. An added bonus of the taco format was that it made it easier to eat one after another—both the wife and I ate three to make a meal. All-in-all, it was a great way to start out my explorations utilizing my Cajun bacon and I'm excited to see where I'll be led next, which I'm totally open to suggestions to! 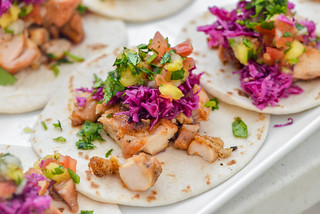