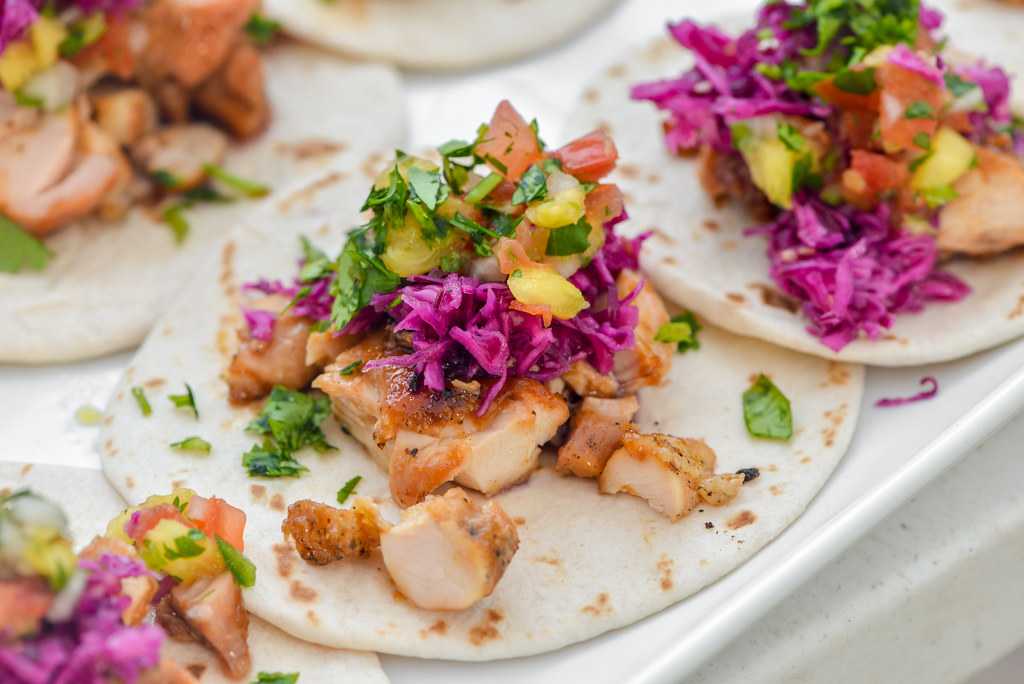 In recent years, I've become more conscious in writing about food and cultures that are not my own. For me, that hasn't translated to limiting my recipe scope, but understanding more where the food comes from, what it means to people, and trying to honor that as much as possible. I'm not sure how much of it comes across in my posts and recipes, but it's definitely in my thoughts as I tackle dishes I'm planning on sharing here. That has led to me searching out more ingredients and processes that are true to a recipe's origins, but I'm also aware I haven't been everywhere, know everything, and am sometimes naive and prone to mistakes—everything's a learning process, right? Sometimes I'm led down wrong paths, and the first time I cooked and shared a post on huli huli chicken that I had based off of a recipe I saw in Cook's Illustrated, commenters let me know that it wasn't totally faithful to its Hawaiian origins, although it was delicious in its own right. I keep coming back to this recipe that coats chicken with a sweet pineapple glaze, and it felt really fitting to resurrect it in this taco form for a Tiki-themed Meatwave I hosted recently, but I'm left wondering if it's time I drop the "huli huli" label and give it a name that doesn't have representation complications attached. 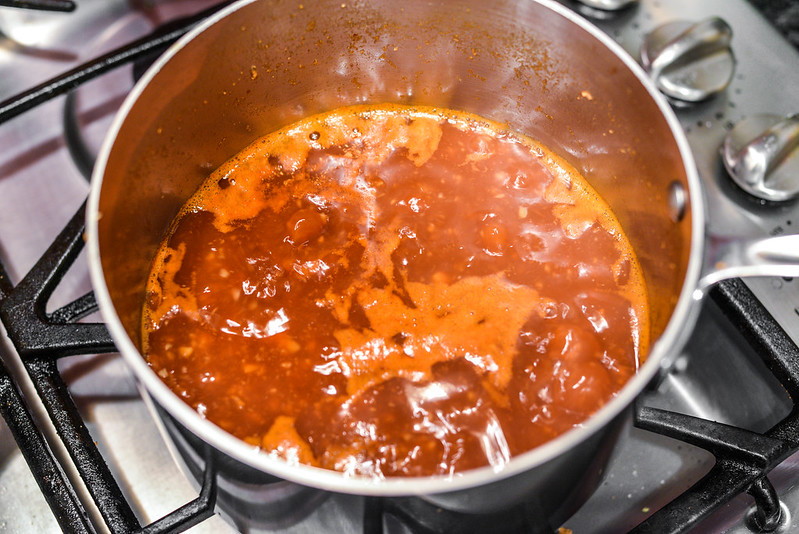 For now, I think I've stuck to the huli huli name because, from what I can tell, there really isn't one defining sauce recipe. Different folks may have different recipes, but in general, a sweet glaze is a defining trait. So Cook's Illustrated may not have made too big of a stretch when they devised this sauce that brings together pineapple juice, brown sugar, soy sauce, ketchup, garlic, ginger, and sriracha and boils it down into a thick glaze. 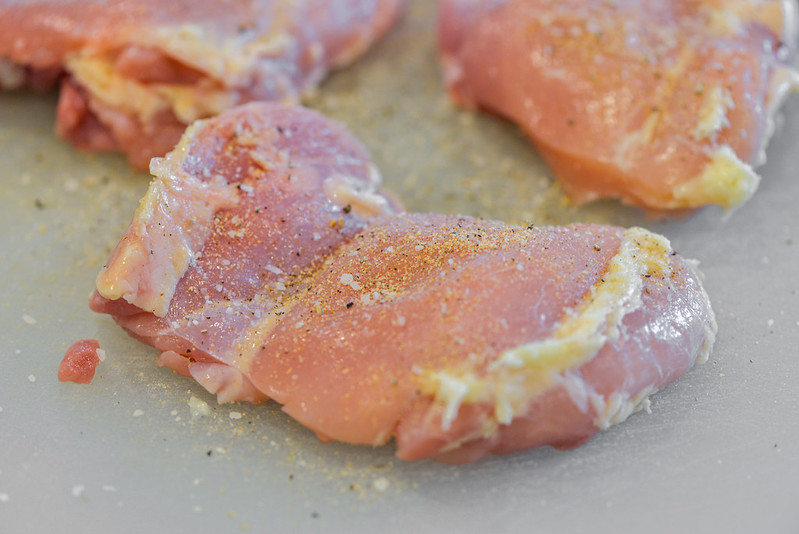 Huli huli chicken usually means halved birds, and in my first post about it, that's exactly how I cooked it, but I made my own variation here for tacos and used only skinless, boneless thigh meat, which grills up nice and juicy to make a perfect taco filler. Before grilling, I gave the thighs a seasoning of ginger powder, garlic powder, salt, and pepper to introduce some flavors that were in the original recipe that were imparted via a brine instead. 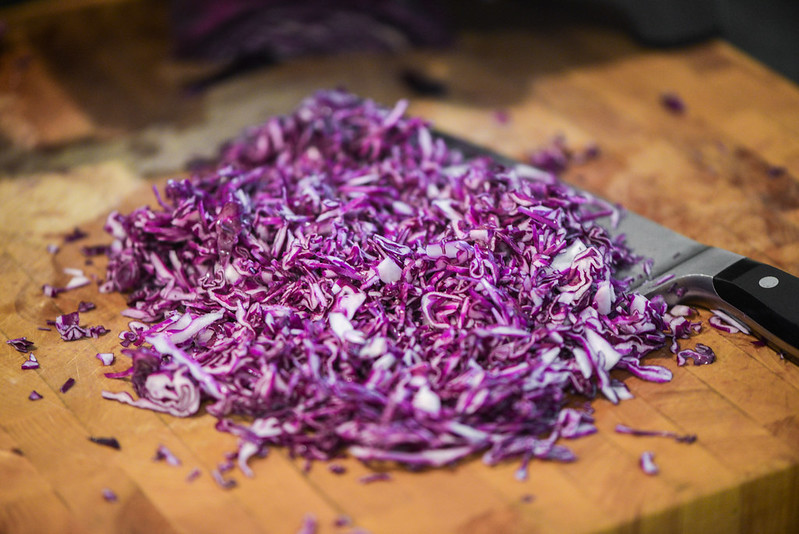 For the taco toppers, I decided to go with two accompaniments, the first being a red cabbage slaw. Red cabbage is a bit tougher and crunchier than green, so I'm not a huge fan of it for a slaw that's going to be eaten on its own, but I've found when used as a topping, red cabbage adds an extra crunch that makes it stand out more than green. I devised a red slaw recipe for some barbecue chicken tacos awhile back that I loved, so used almost the same thing here, but just changed up some small details to flavor it to pair better with the sweet chicken that had a slight Asian influence—mainly subbing sesame seeds for the celery seeds and adding a little sesame oil into the dressing. 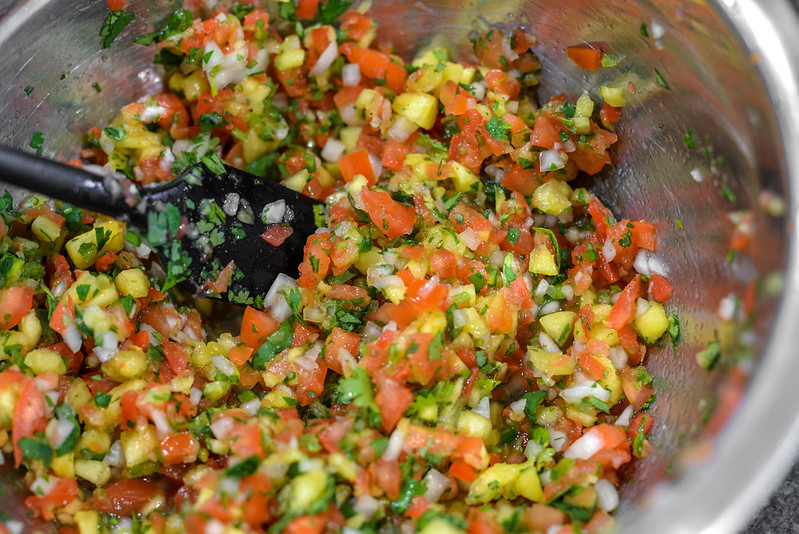 The second topper was this pineapple pico, which was just my standard pico de gallo recipe with pineapple thrown in. To be totally honest, I had made this for a different recipe that same day for tuna wonton nachos, but ended up using it on these tacos too and it worked so well, I thought it needed to be part of the end product I was sharing. 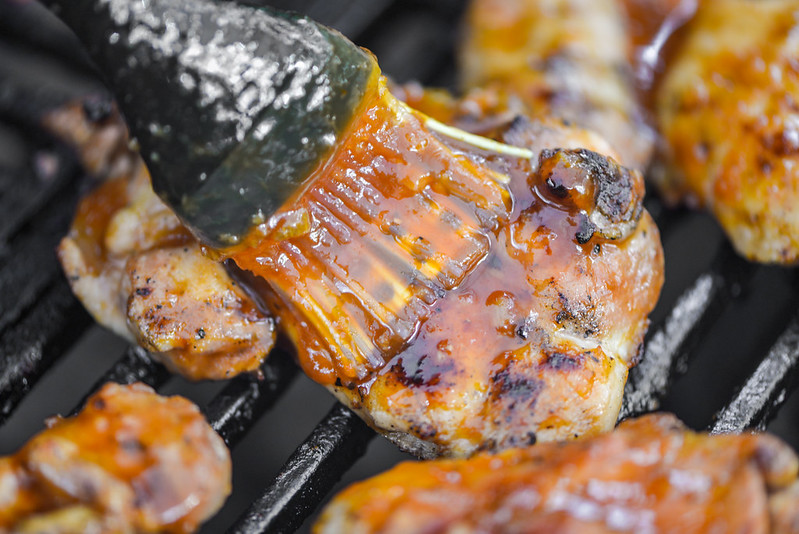 Flavor is my primary consideration when choosing thighs over breasts, but it also helps that thigh meat is very forgiving when cooking. Unlike breast meat, which dries out very quickly if overcooked, thighs can take some punishment and still be incredibly juicy. So I often don't monitor temperature much when cooking thighs, instead going for ideal searing and just ensuring everything's cooked through before removing it from the grill. For this chicken, I got a good sear on the meat before brushing it with the glaze and allowing that sauce to bake down over the heat of the coals. 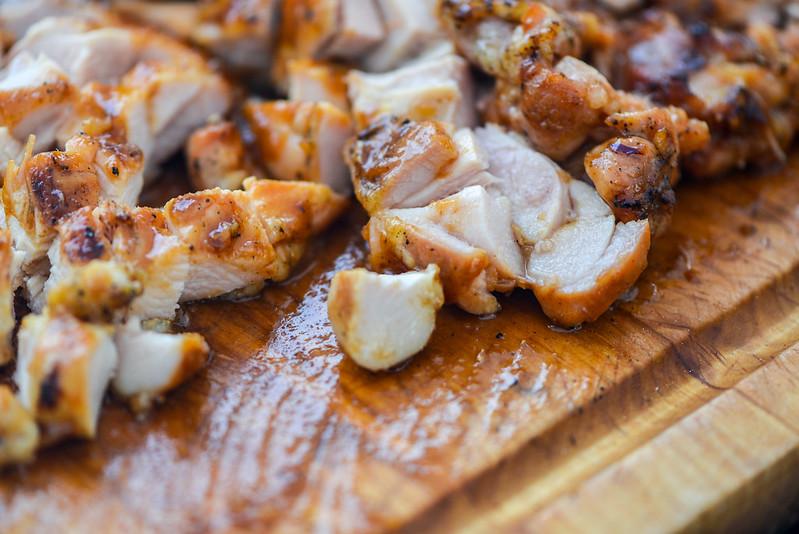 After the chicken was done, I diced it up and then went back to the grill and heated up my tortillas. I'm usually a homemade tortilla man, but I saw these street taco sized flour tortillas at the store and they seemed perfect for my use here and they ended up decent enough, for store bought at least. 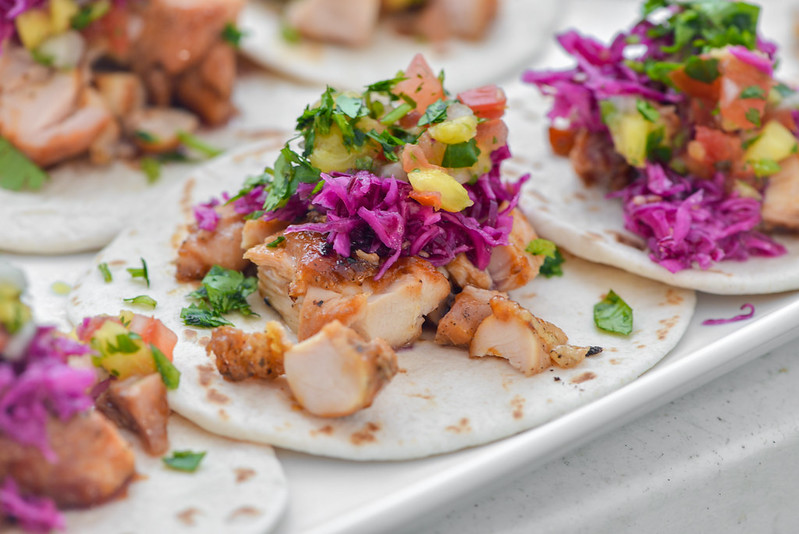 Then to serve, I put some chicken in each warm tortilla, then topped with the slaw and pineapple pico. A dish like this causes some internal conflict in my current mindset—it's a cultural mashup, which makes it feel oddly American at heart, but neither base culture is my own, but also, its just tastes damn good. For trying to make something that fits into a Tiki-themed party, this comes with all deliciousness you want with a fitting side of cultural appropriation baggage that's easy to forget about after a couple extra-rummy drinks. The sweet chicken had a festive, fruity brightness with savory and sharp underpinnings of garlic and ginger that melded extremely well with the crunch and tang of the slaw and freshness of the pineapple pico. I'm not sure if "huli huli" either sets wrong expectations here, or honors its origins, so I still have some stuff to work out in that respect, but that personal journey at least has a very delicious road to follow. 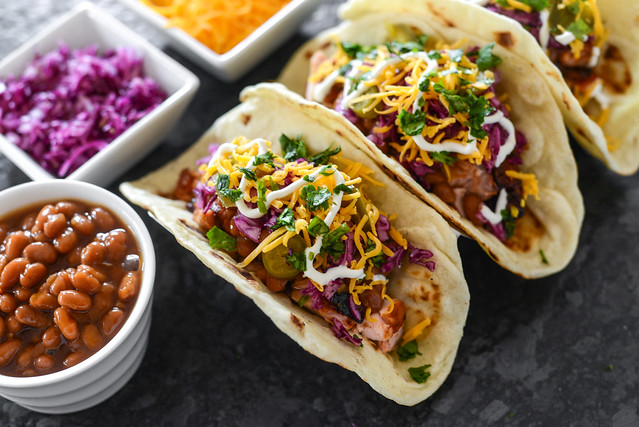