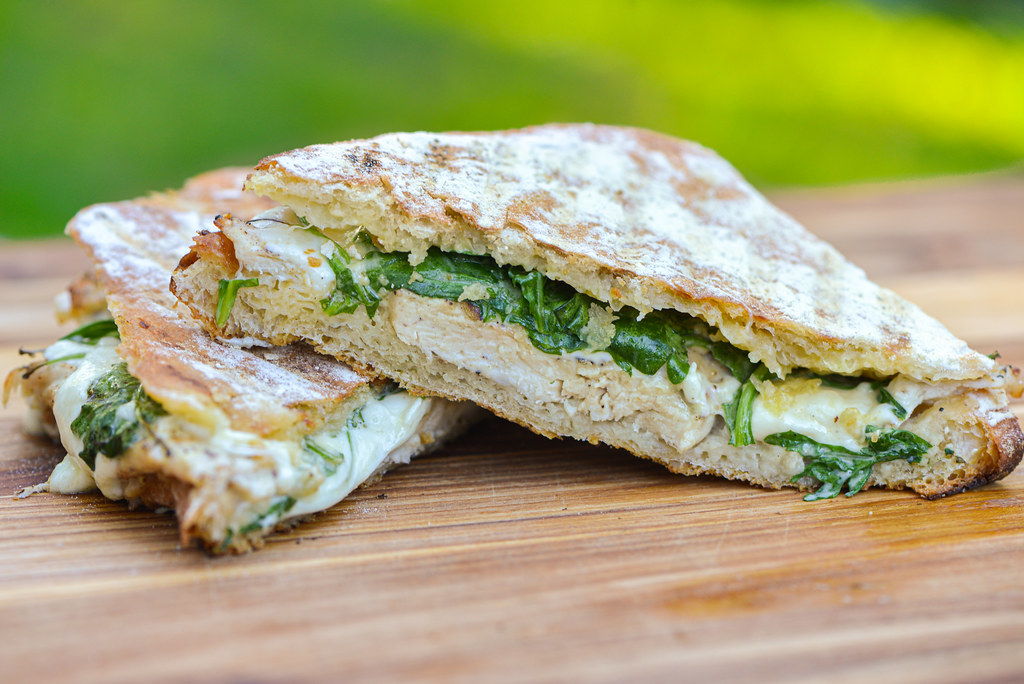 I'm pretty lucky that, while it's been almost five years since I've left NYC, I have been able to maintain my job there which brings me back frequently enough that I get my fill of what I miss most about the city. You might think I may be itching to try the latest and greatest foods the city has to offer, but in actuality, my short stints there are almost exclusively filled at dining at the spots I used to eat at most often, which more often than not are the local joints in Astoria. None is more comforting to me than Il Bambino, an unassuming panini shop that my wife and I have enjoyed since their initial opening in 2006. I think the first of their stellar paninis I tried was the chicken with spicy mayo, mozzarella and arugula and, while it didn't take them long to switch from a crispy fried chicken breast to a roast one, that sandwich has been one of their constants and has also remained one of my favorites. A recent longing for the panini started to feel extra painful by the fact that I had no idea when I'll actually be able to return to Astoria and get it again, so for the first time ever, I recreated it at home to help inject some comfort into a very uncomfortable world right now. 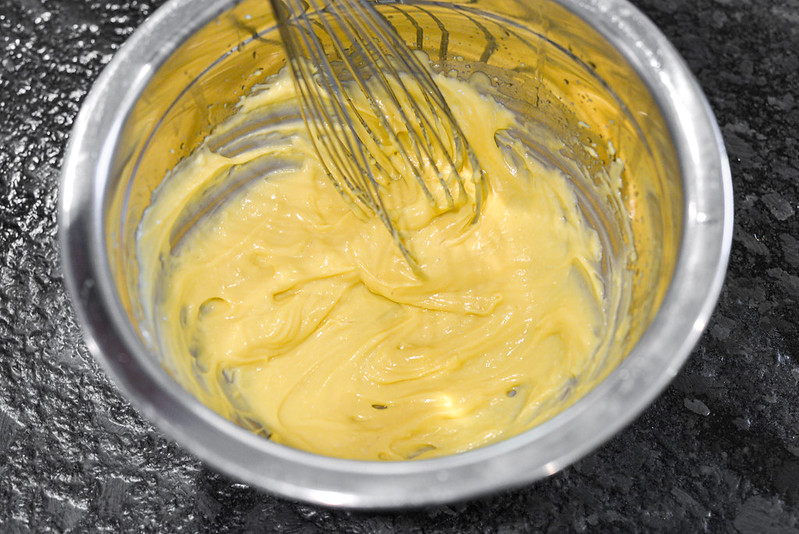 While this panini is only comprised of a few simple ingredients, they are an extremely effective pairing. The spicy mayo is really the central focus and most powerful of them, and I assume if I were to take some mayo from the fridge and add a bit of sriracha to it, I'd get something fairly close to Il Bambino's proprietary orange-hued version. I did, however, have a jar of Calabrian chili oil on hand and decided to make my own mayo utilizing it. I made this mayo by hand so I could continue tasting it while it came together to find the right spiciness and know the best ratio of chili oil to regular oil. When I was done, the mayo wasn't the orange color I was hoping for, but the flavor was incredible with a heat that I knew was going to shine in the final panini. 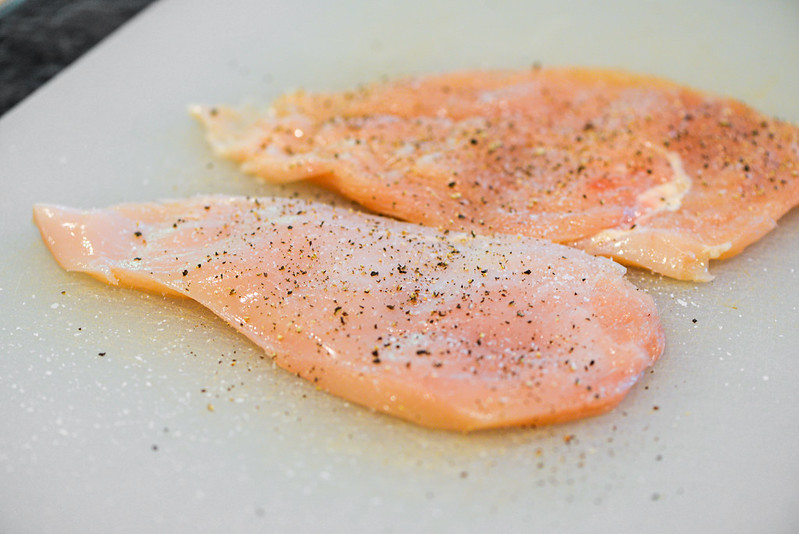 Another change up from the original inspiration was the decision to grill the chicken. The Il Bambino panini uses roast chicken breasts, which provide the right heartiness with a neutral flavor that lets you be able to taste everything else really well. Since I was going to use the grill to press these paninis, I figured I might as well use it to cook the chicken too. To get the single larger breast I was using prepared for the fire, I first halved it horizontally, giving it an even height for even cooking, and then seasoned it generously with salt and pepper. 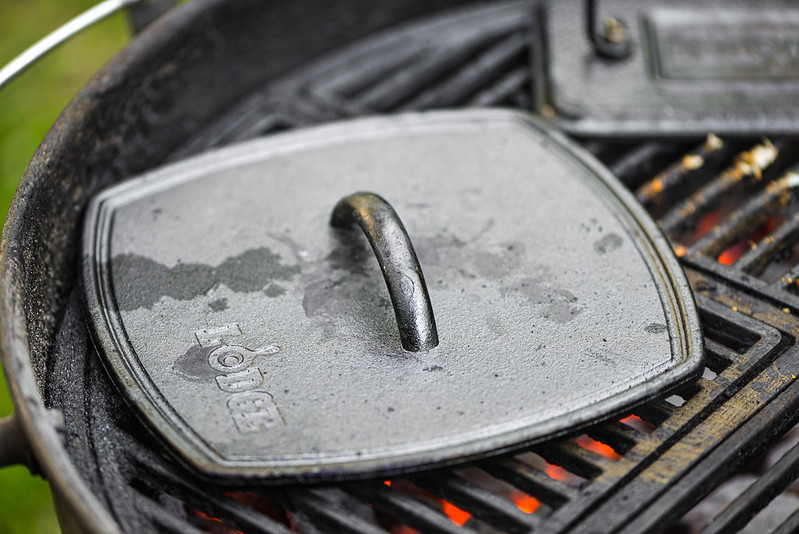 To effectively heat the panini from both sides, I needed to get my cast iron presses nice and hot. I knew the chicken was going to cook very quickly, so I decided to put my presses directly over the fire before I started grilling anything so they had ample time to heat. 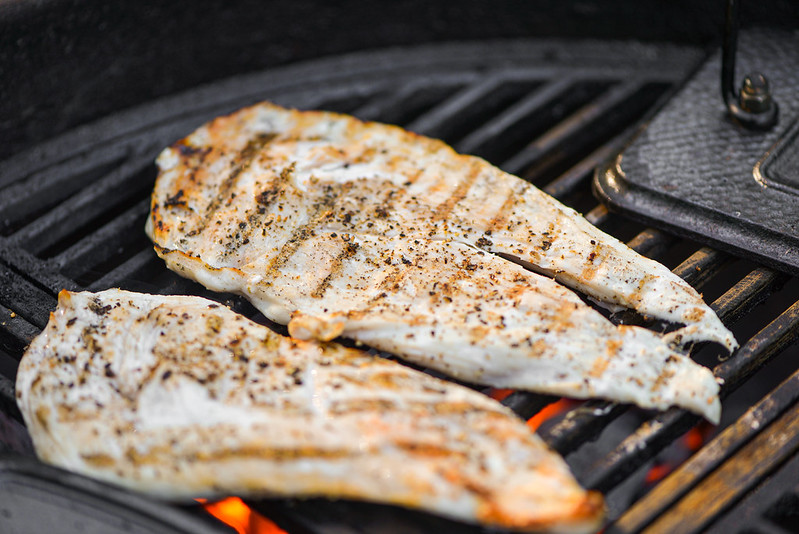 I made sure to leave space over the coals to cook the chicken in. I hadn't brined the breast in any way, so I had no insurance policy for overcooking. This led me to keep a very watchful eye on how the chicken was doing, filliping it as needed, and pulling it off before it got too firm or dry to ensure it would remain juicy during a second cooking stint inside the sandwich. 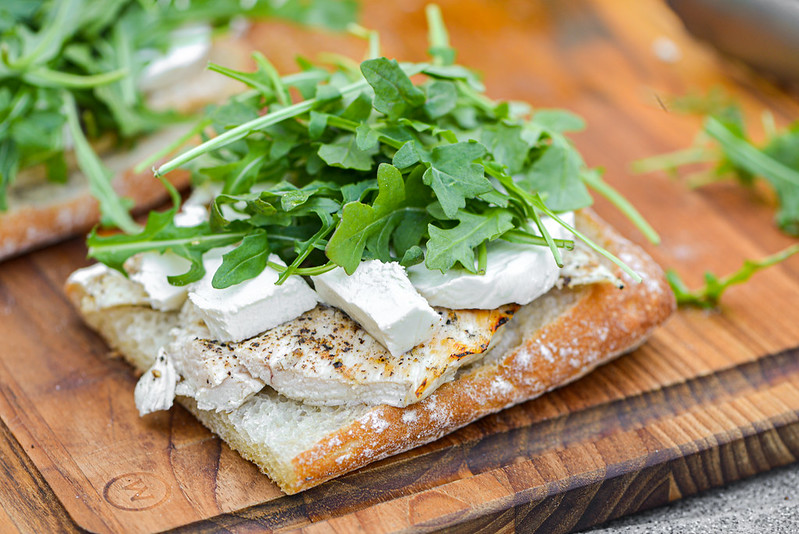 Il Bambino creates masterful panini combinations, but their bread is also notable for having the perfect thickness that gets nice and crisp without being too hard or dry after being pressed. I had no idea where to get that exact type of bread here in Durham and my bread making skills aren't such that I would know how to recreate it. So rather than suffer pains trying to find the bread or cooking it up myself to likely unacceptable and disappointing results, I picked up a loaf of ciabatta from my local bakery that I knew outputted a product that's hearty enough for panini making ventures. To assemble the sandwich, I cut the chicken into a few pieces so it would fit nicely on the bread, topped that with slices of fresh mozzarella and arugula, and smothered the top half of the bread with a generous helping of the spicy mayo. 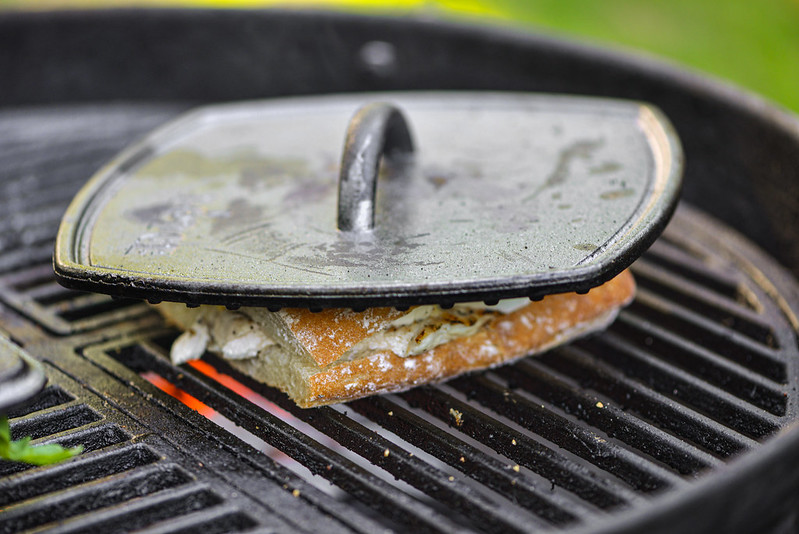 Then I placed the entire thing close to, but not directly over, the coals of my two-zone fire and nestled the press on top using my welding gloves to handle the very hot cast iron equipment. Next I covered the grill and waited until the the sandwiches looked well flattened, the cheese melted, and bread crispy. 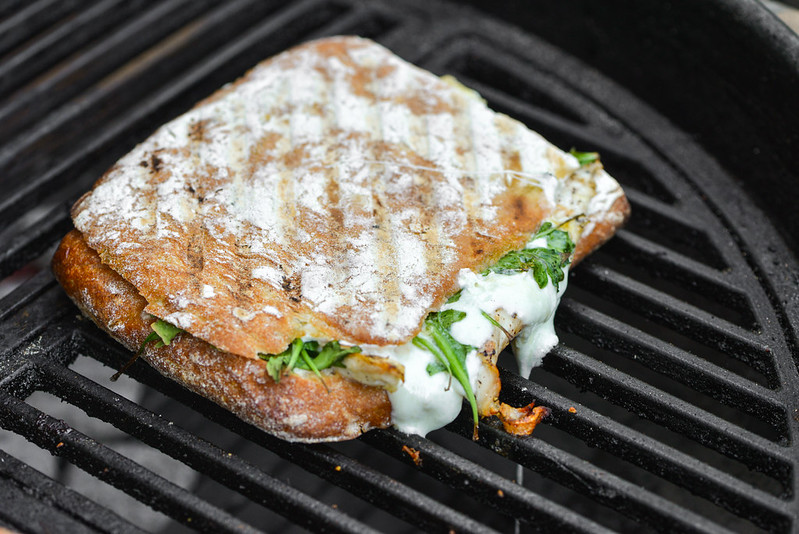 Depending on the heat of the fire, this can be anywhere from a couple minutes to five or more. So after two minutes of cooking, I started to check how the sandwiches were doing and it only took a total of three minutes for them to look exactly how I wanted them to. 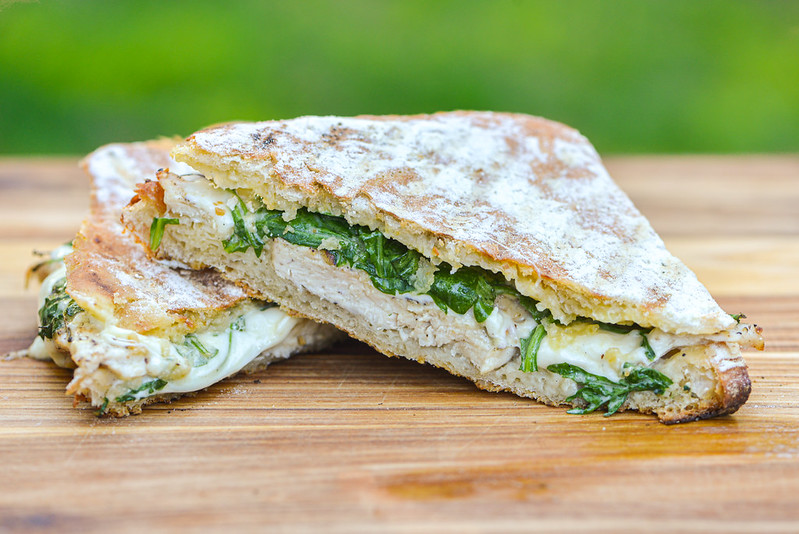 Now, without the same colored mayo and bread type, these panini didn't look quite the same as the one I'm so fond of from Il Bambino, but in flavor, they were pretty on target. I don't think there was much of a difference using the grilled chicken over roasted—it had about the same flavor and effect in the end sandwich. That light flavor of the meat let the peppery kick of arugula come through along with the spiciness of the mayo, while the mozzarella provided a tempering quality in all of its melted gloriousness. My ciabatta was a bit heartier than the bread used in the inspirational sandwich, but the right crunch and toasty flavor was in tact, putting the cherry on top of this really tasty panini. I hope it's not too long until I can get back to New York, and when that finally happens, Il Bambino will definitely be on the short list of places I go to first. 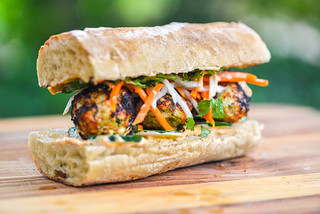